Verkiai, one of the most valuable manor ensembles in the country, is located in the northern part of the capital near the River Neris. Even though the earliest details about the history of the Manor date back to the 14th century, the current ensemble is primarily an exhibit of the Classicism Era. The major buildings of the ensemble, which remained standing to this day, were built in the end of the 18th century by the order of Bishop Igncy Massalski eventually acquiring the structure prevailing today. The complex suffered major damages during the period of Napoleon’s march east; rather major changes were made during the reconstructions done in the middle of the 19th century, when it was under the management of Ludwig Wittgenstein, not to mention multiple negative changes resulting from the peripetia in the 20th century. Both the formerly spectacular park, which withered away thought history, as well as the buildings of the ensemble and their interior make up only for a fraction of the past grandeur.

The biggest contribution to the architecture of the ensemble was made by Marcin Knackfus, the pioneer of Classicism in the country; later on his work was continued by his student Laurynas Gucevičius. The two office houses designed on both sides of the elliptic front square reflect the shapes of the Early Classicism: the composition of these buildings used to be identical. Even though the eastern office building is older, the western building still remains with only minor changes made subsequently, thus preserving the exterior as a vivid example of M. Knackfus’ creativity to this day. The palaces of the two office buildings illustrate a tranquil, monumental classicist composition: the layout of the rectangular buildings is highlighted by the porticos with Ionic columns in the middle of the façade; the façades are divided by pilasters of the Ionic order. The window rows are outlined with frugal architraves on the first floor and cornices on the ground floor, which merge with the rear façade; the western office building also is characteristic of more frugal vertical division of its façade, here the pilasters turn into frugal beams. A semi-floor attic is separated by the entablature on the two-floor parts of the buildings.

Major changes to the exterior of the eastern office building were made during the reconstruction in the middle of the 19th century under supervision of architects B. Simonas and A. Žirardas. The biggest changes were made to the layout of the building and the interiors we see today also represent this period. A new tower was built next to the building as well as a greenhouse (it was destroyed eventually), a hall and two staircases; nowadays we can see the triangular pediment above the portico built at that time. Nevertheless, some of the interior designed in the beginning of the 19th century was preserved here, including the wooden finishing, colouring, painted and embossed decorative elements. The composition on the plafond ceiling of the initial staircase “Cupid and Psyche” by Georg Becker also survived to this day, whereas the remaining decorative elements of the great hall, such as the mouldings on the walls and the ceilings and columns, remind of its past luxury.

The basements of the former main palace, which was one of the biggest buildings in Vilnius region, remained in the northern part of the front courtyard as an indication of its former location. The construction of the building was taken over by Laurynas Gucevičius when it was already in progress: this was one of the most mature pieces of his creative work, which dominated the ensemble, but, unfortunately, it remained standing for a very short period of time. The palace suffered major damages during the French – Russian War in the 19th century, it kept deteriorating and eventually it was demolished in the middle of the 19th century.

Some other buildings of the ensemble are also attributed to Laurynas Gucevičius. The expression of the compact façades of the pavilion building is dominated by the deepened entrance highlighted by the two rows of columns and the cornice outlined by the large modillions. The dome rising above the building covers the middle room on the first floor. Here the vault is decorated with the remaining painted coffers and various rose-windows. The portico with six columns and the cornice supported by modillions also dominate the oldest connecting block of the inn buildings. Here the middle space of the building was kept bigger, just like in Vilnius Cathedral. The administrative building was built further away: its horizontal elements highlight its massive space; however, the most expressive part here is the side façades where we can see imitations of porticos of the Tuscan order. 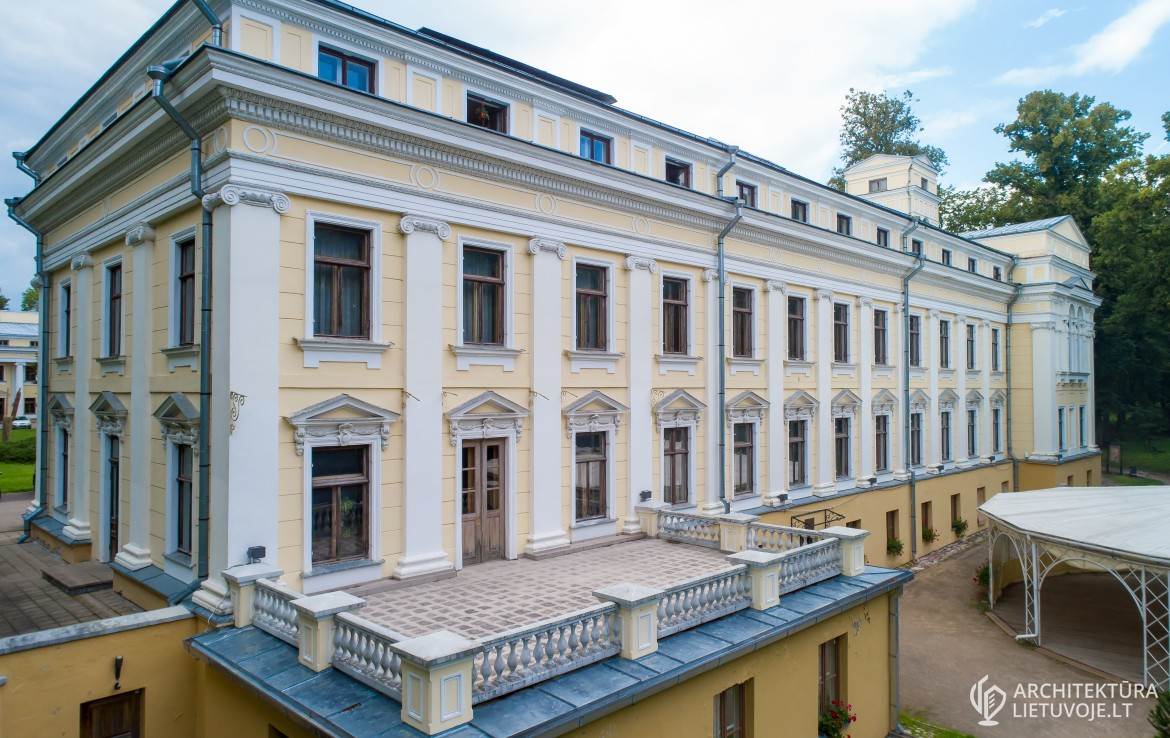 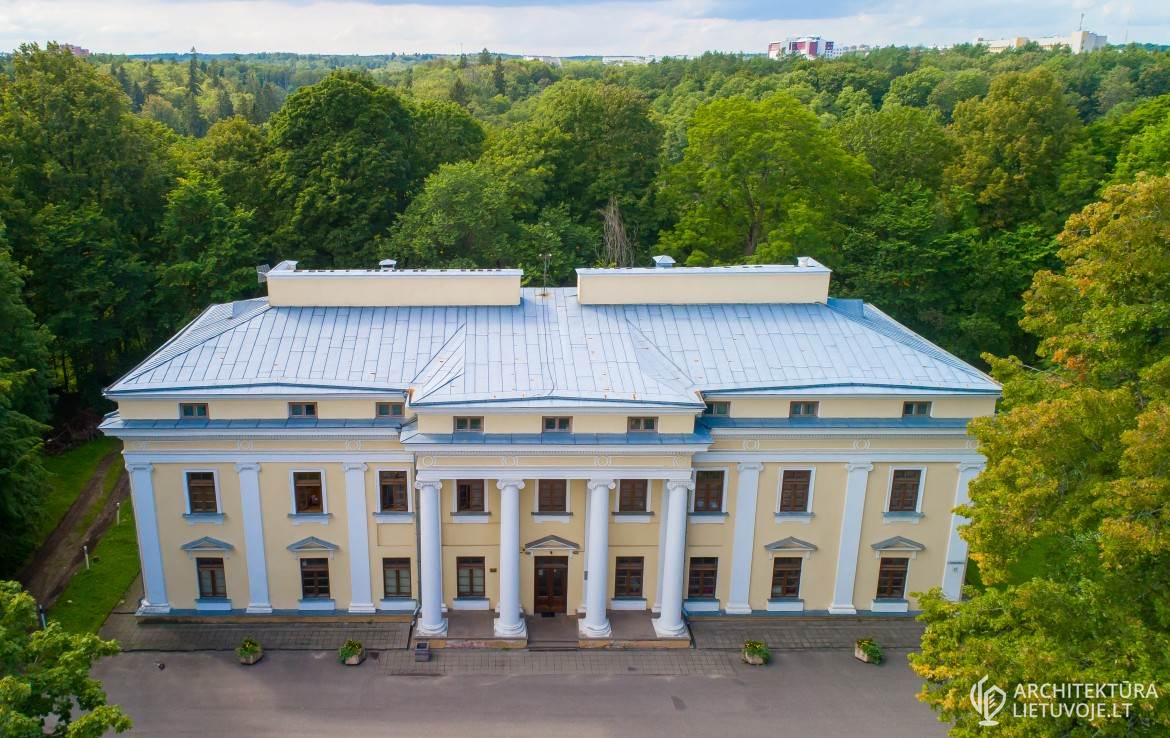 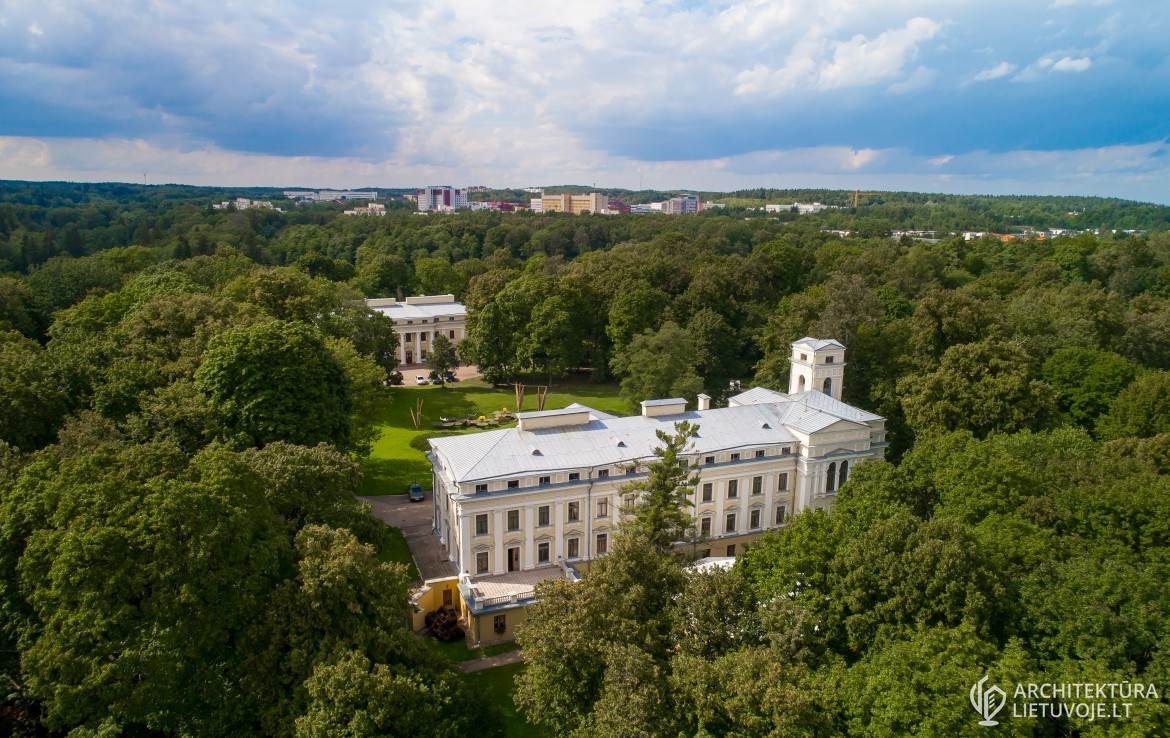 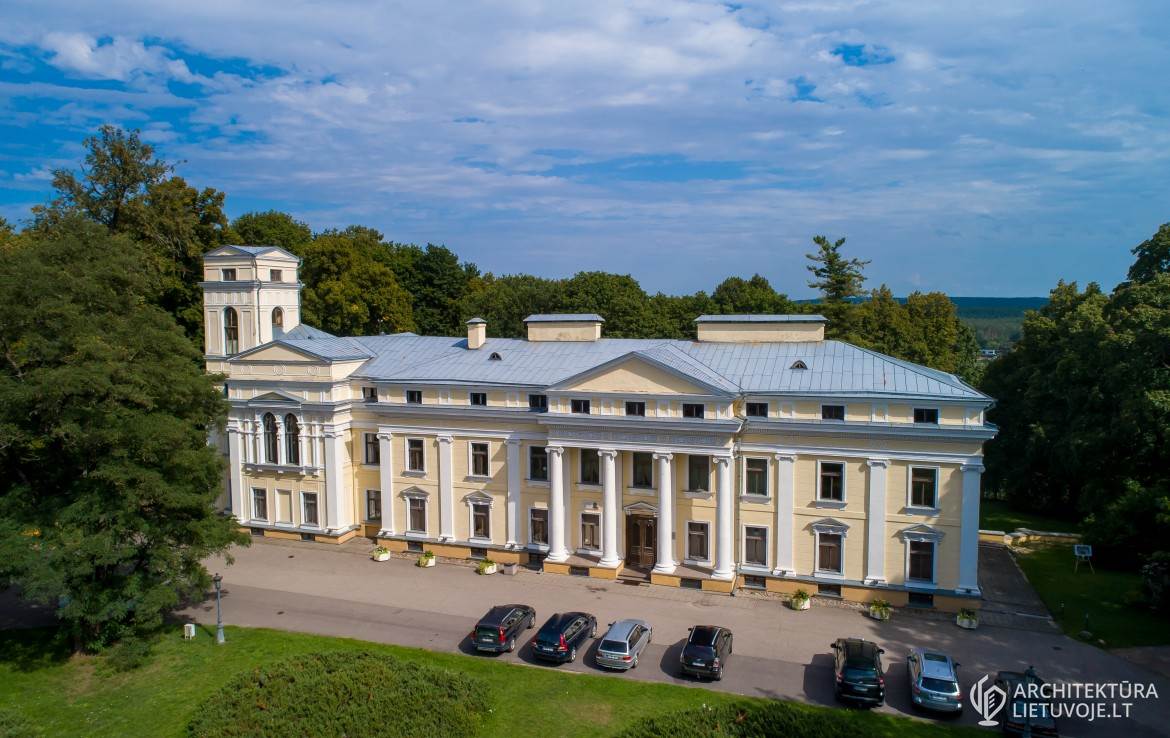 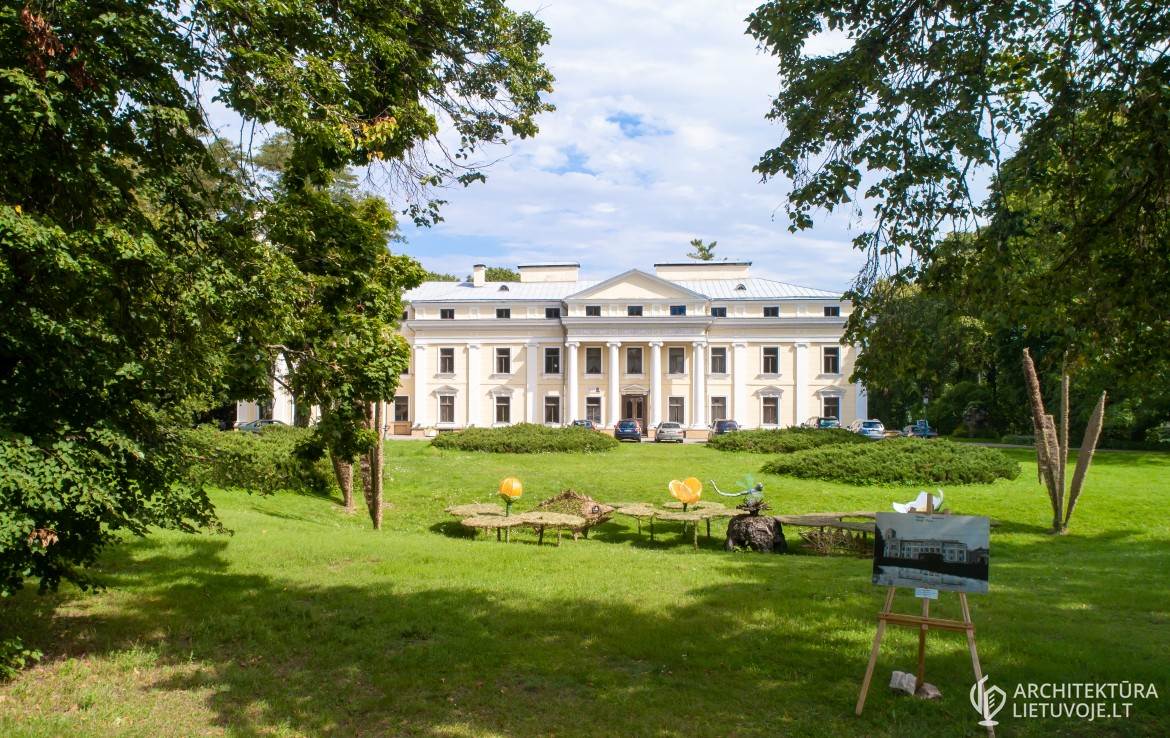 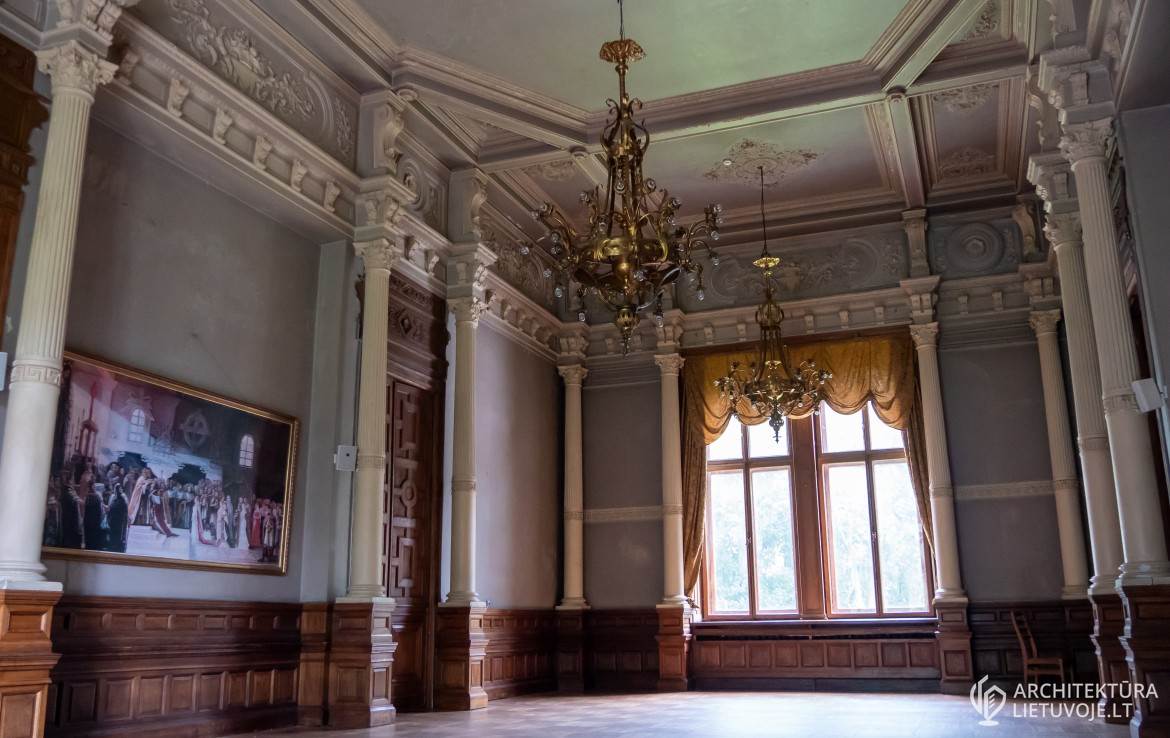 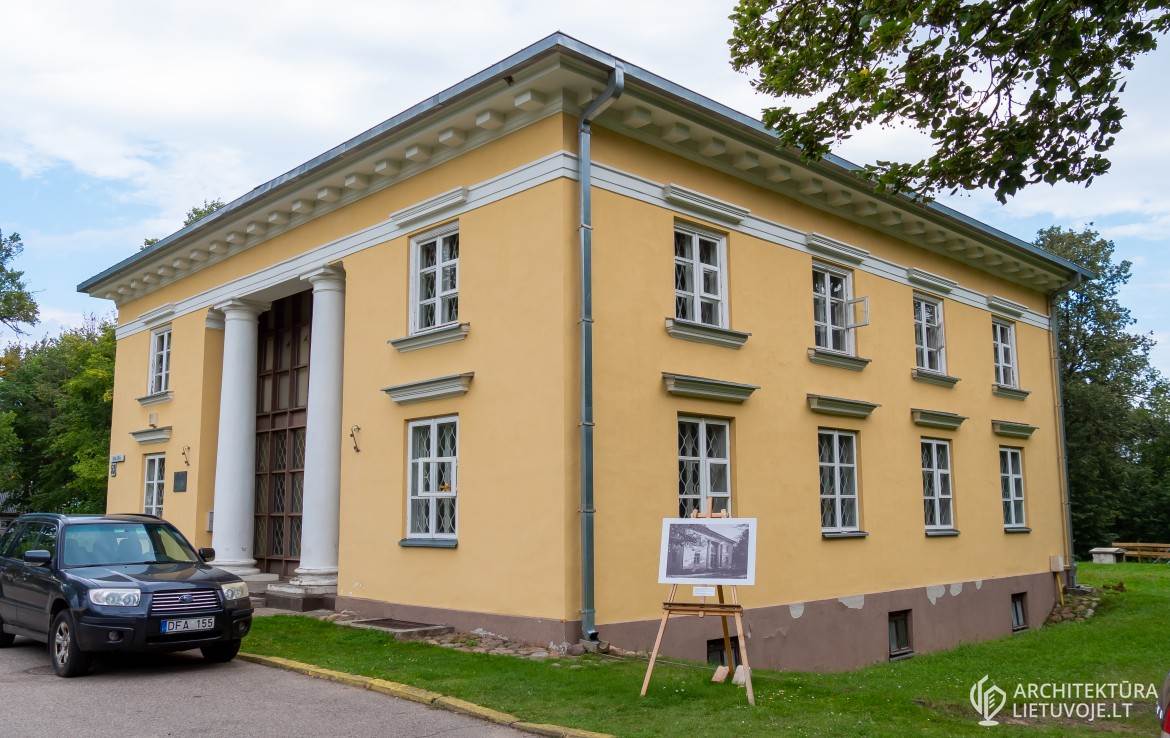 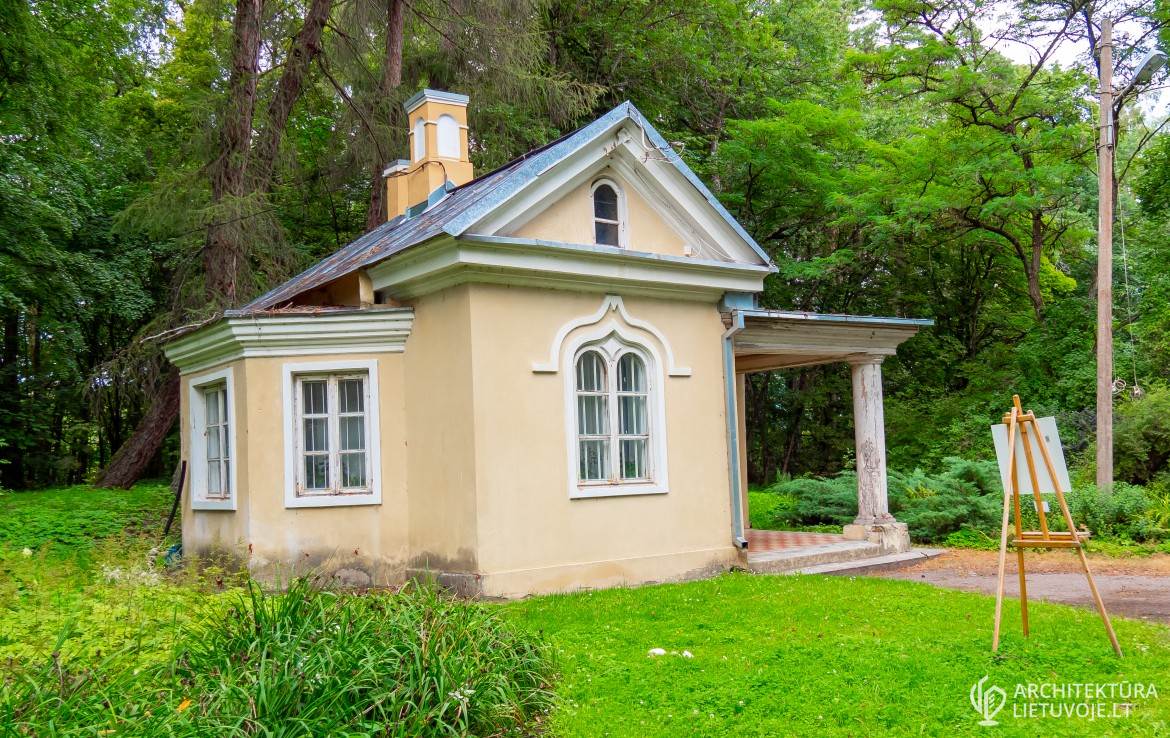 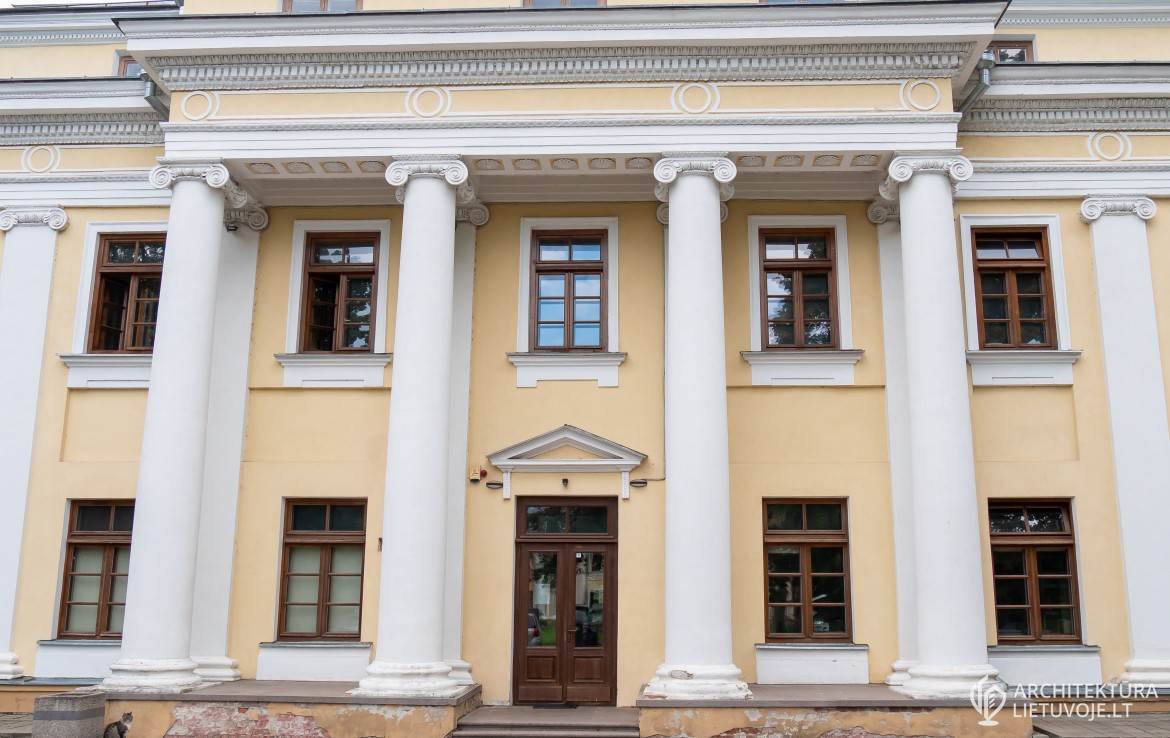 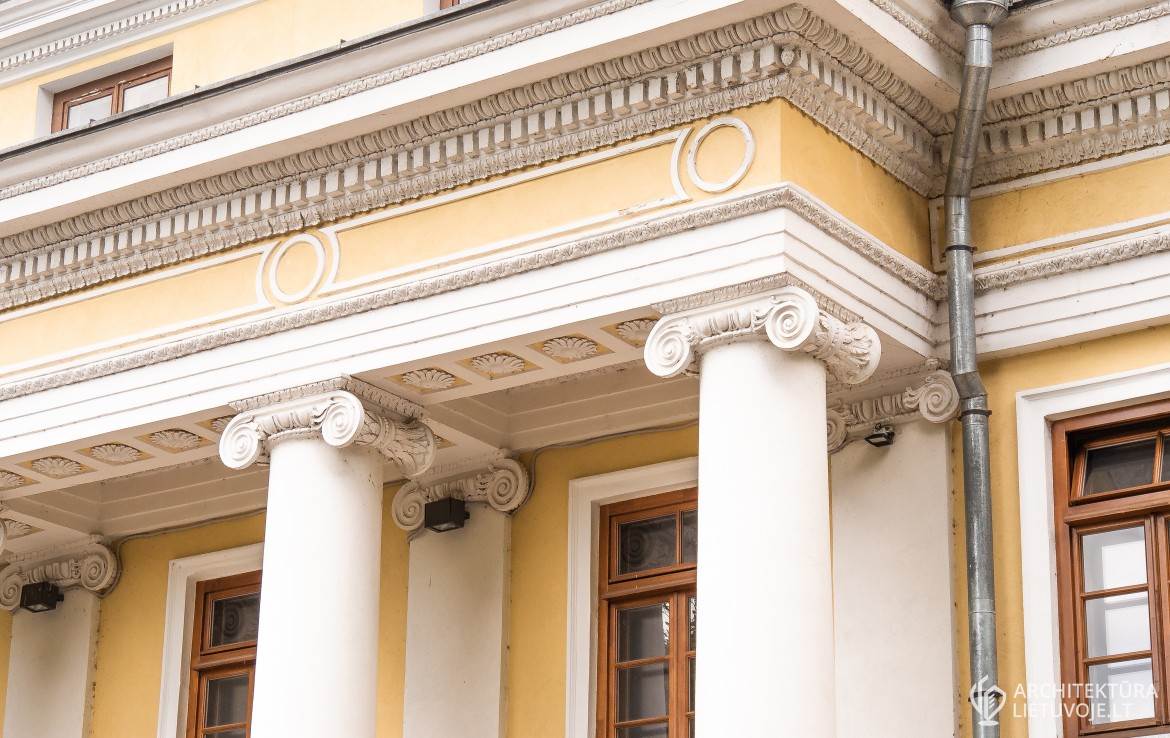 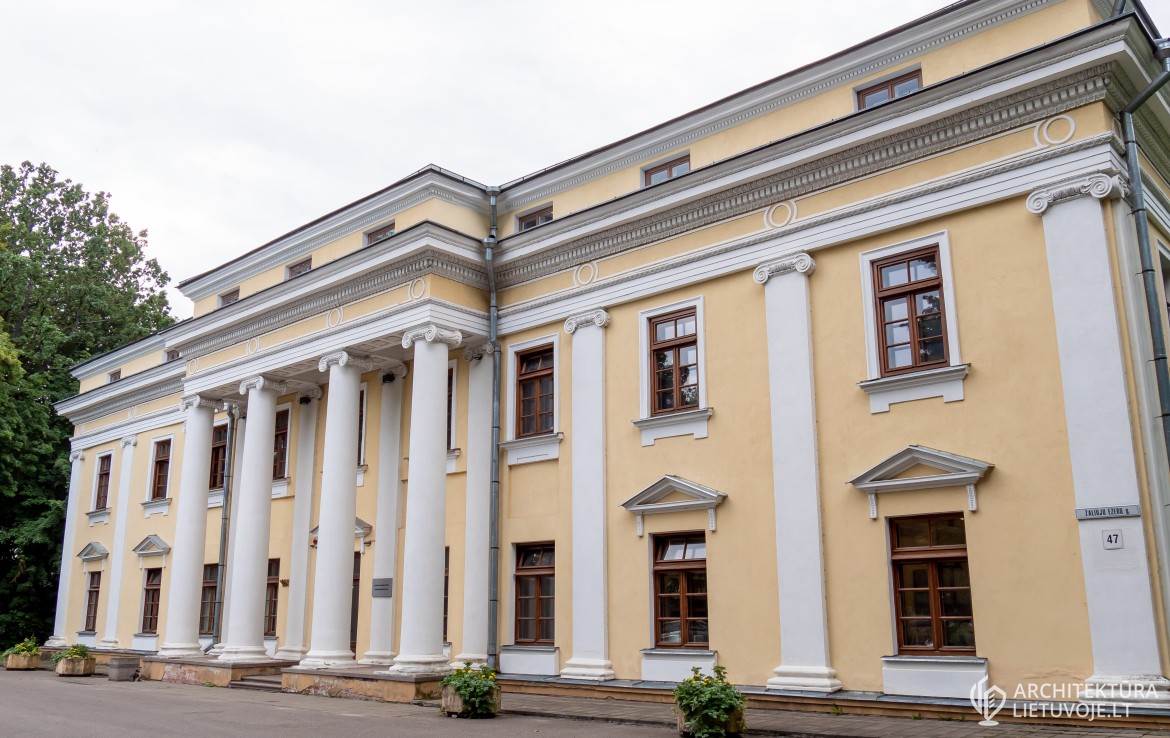 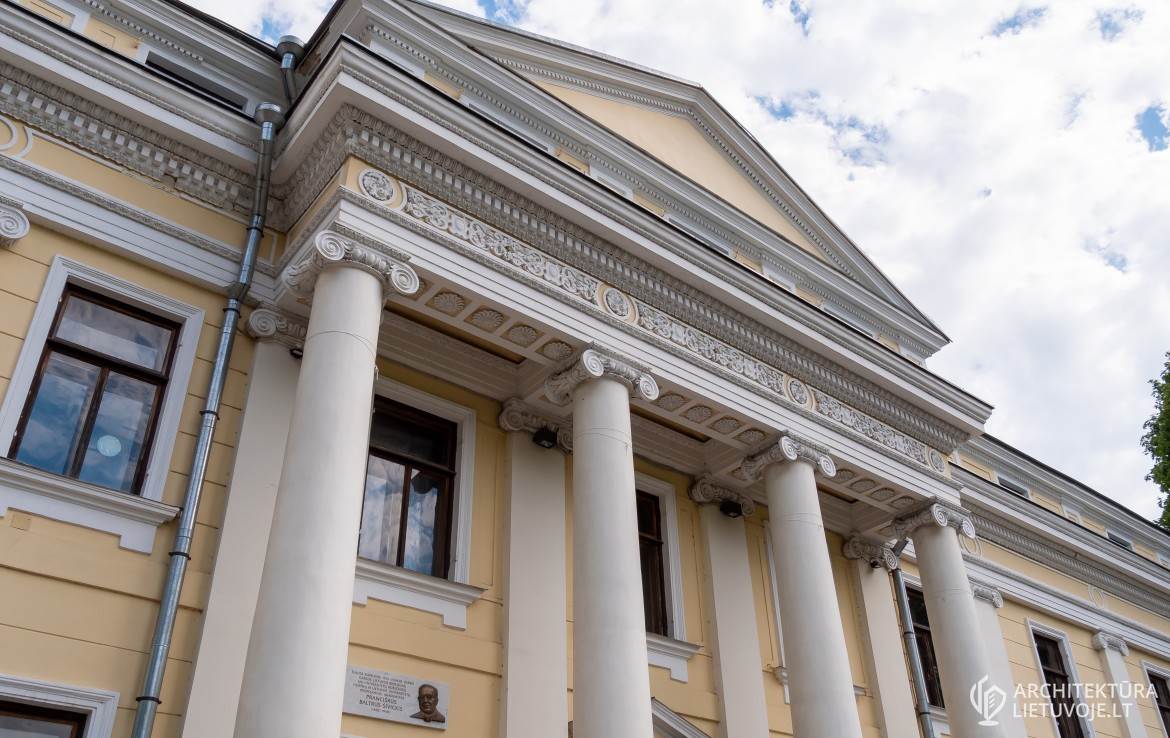 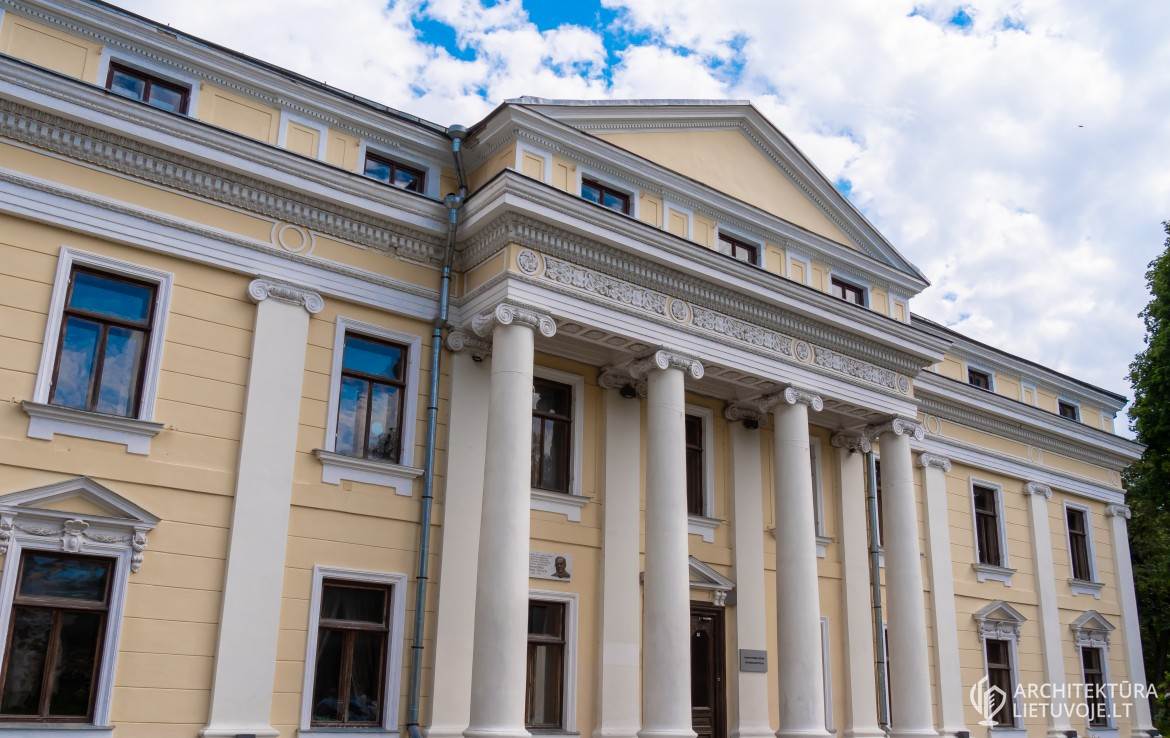 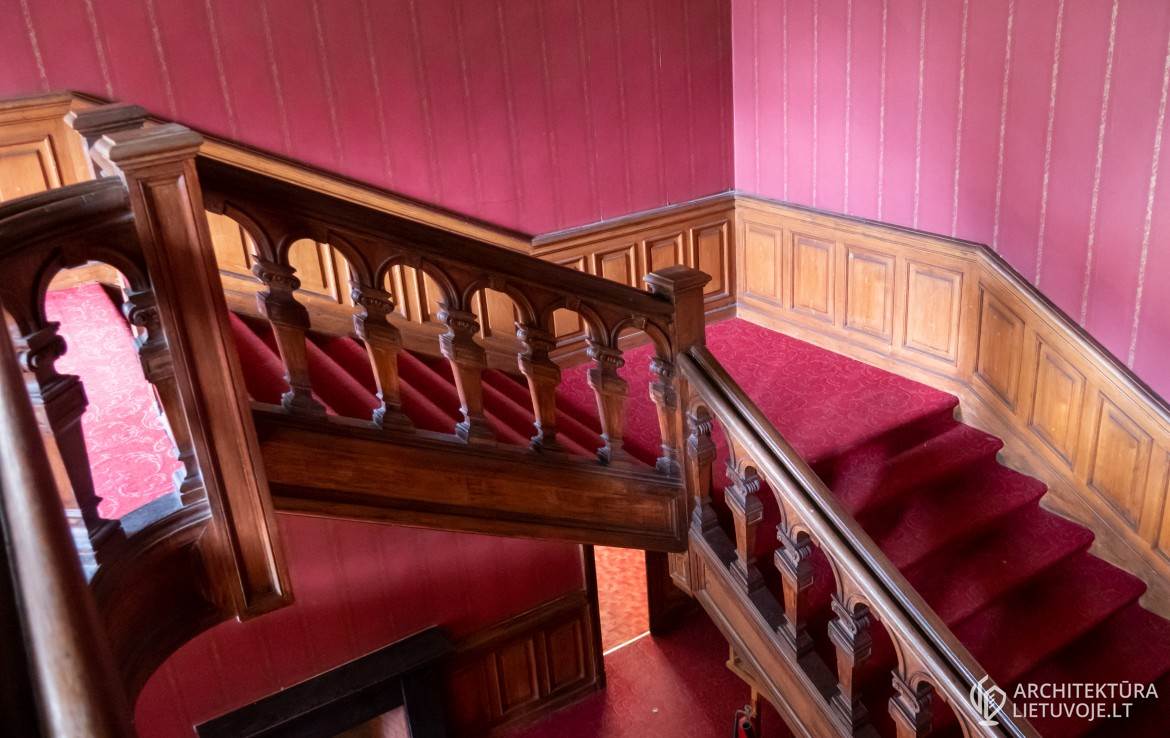 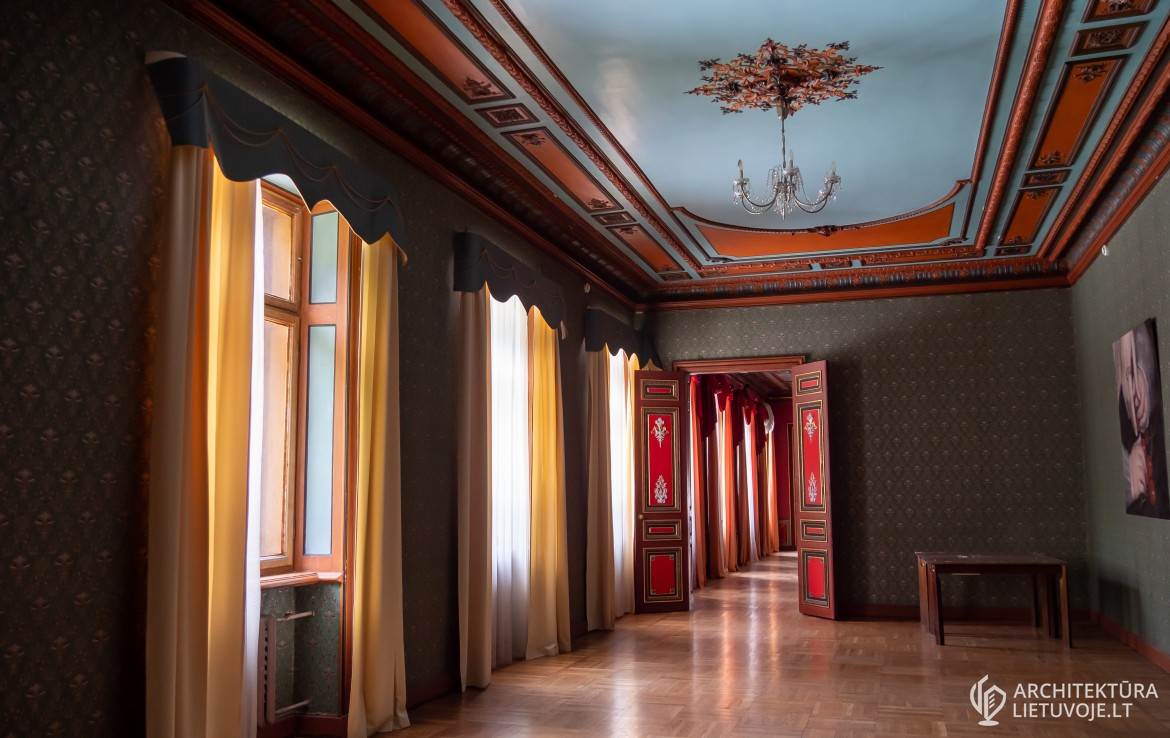 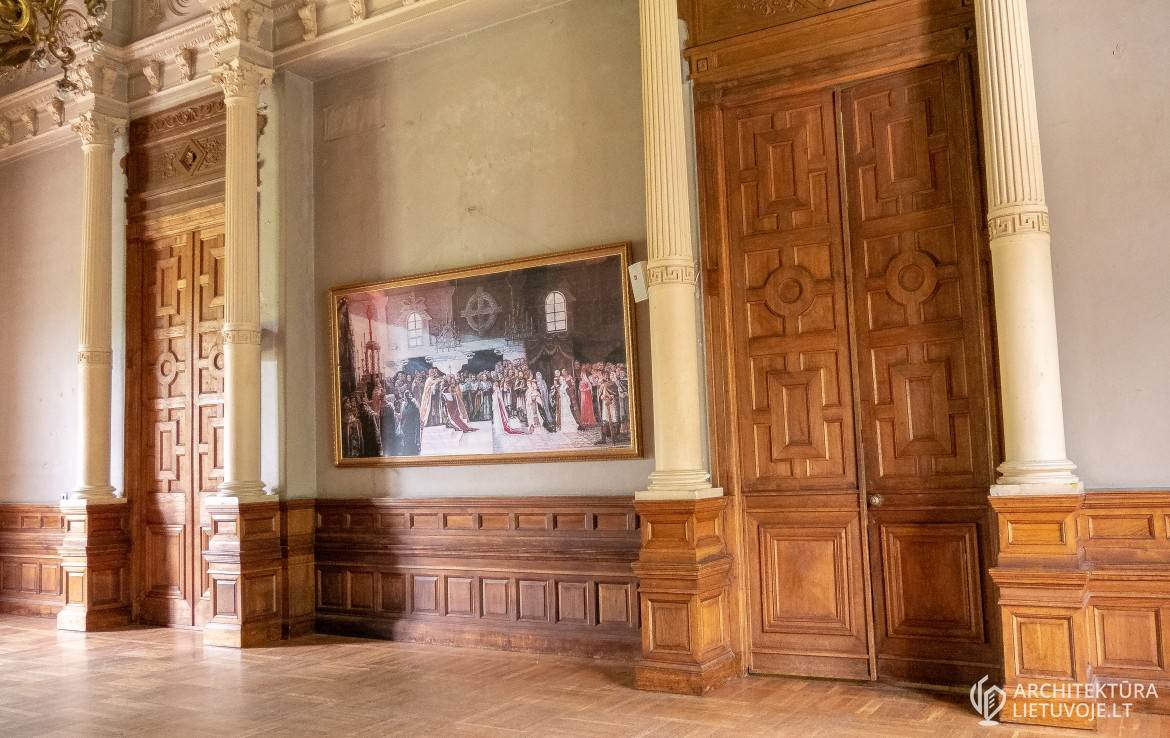 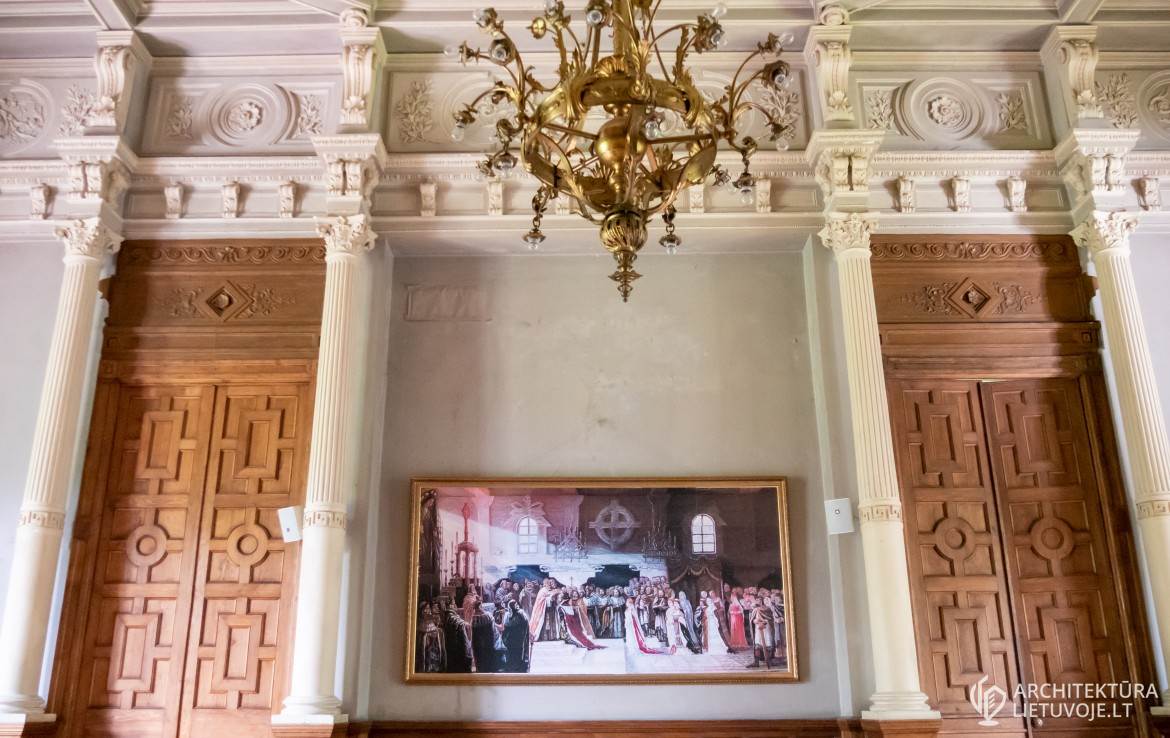 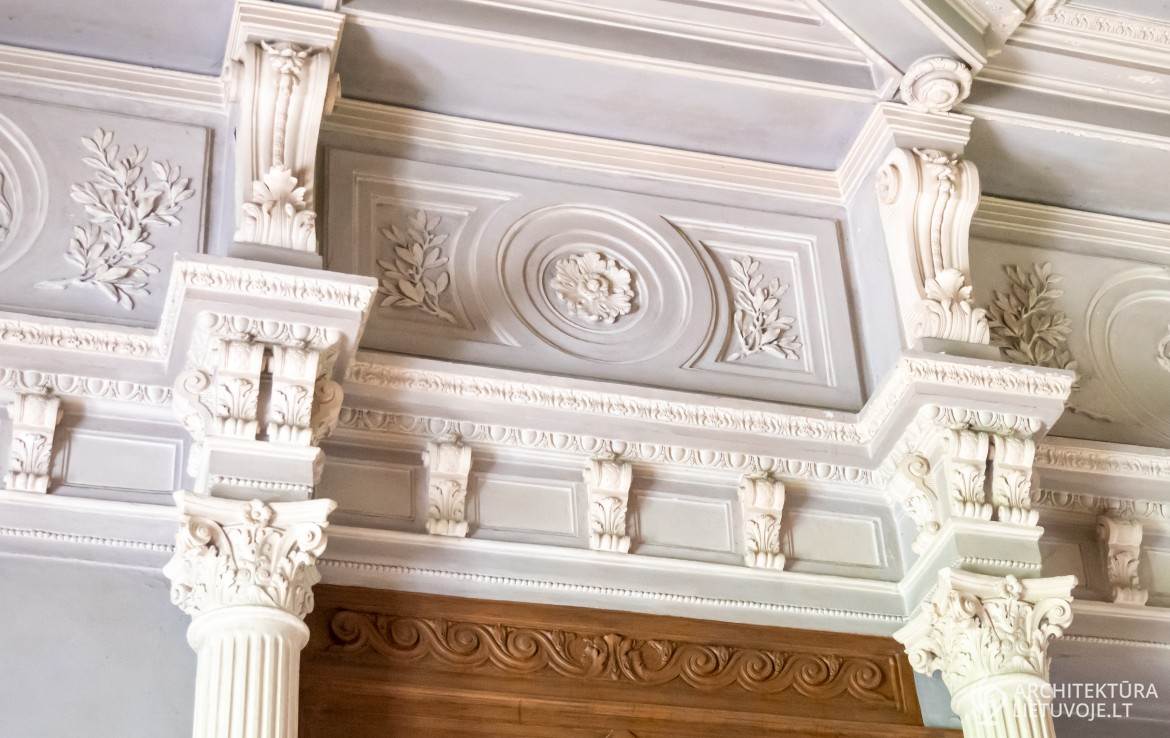