In commemoration of the so-called year of Vytautas the Great, the cornerstone of one of the most important public complexes in the history of Independent Lithuania was laid in November of 1930: the building of Vytautas the Great Museums of War and Culture. Thus, two types of exposition were combined in the building: a military one reflecting the national narrative of the country was established on one side of the building, and on the other – artistic, formed of the collection of the paintings of M. K. Čiurlionis, examples of folk art and other art exhibits. At first two buildings were intended to be built, and there were many debates over different locations; later on it was decided to combine both museums into a single building – the interesting fact is that initially there were plans to build even a six-museum complex. A much more expressive location was initially planned for the museums – the discussions were mostly focused on the constructions on the hills of the city. However, a rather banal circumstance – the lack of large, vacant plots – led to the new building appearing in the plot, where the old Museum of War has been standing since 1921. The size of it was also significant due to the fact, that the most important state commemorations were taking place by the building. The most essential memorial complex of the country has already been formed here – the garden of the museum. The constructions of the building were mostly funded by the donations of the residents – the building was completely finished only in 1936.

Following the re-tender, the work of a team of three generations of architects was selected for the construction of the new building. Although the composition of the new palace was rather classical, one of the first attempts at modernist architecture was encoded in the laconic forms of the monumental façades, and even the influence of Art Deco can be observed in some of its details. The “military” side of the building is of much stricter forms, the façade is formed of three avant-corps. The lower part of the building is formed of two horizontals of window rows, and completed at the top by the planes dictated by function both in the lateral avant-corps as well as in the parts connecting them to the main one. The entrance situated in the central part is raised, and monumental brownish granite stairs, which had to perform the functions of a grandstand during the ceremonies, lead to it. The main accent – five window verticals, divided by six doubled pilasters, situated above the latter part. According to the initial plan, a sculpture was supposed to be set up at the top.

The façade of the Museum of Culture facing V. Putvinskis Street is quite different: the middle avant-corps is semi-circular, divided by the rhythm of windows and pilasters “popping” over the volume of the building, covered with brass crowns. The part connecting the avant-corps here is much more open – vertical windows are set up instead of the planes; the main entrance, leading through the protruding portal, is far less highlighted. Brownish granite stairs lead to the lateral entrances situated slightly above. As it’s typical of the public architecture of Kaunas of that time, the entire complex of museums is covered with light granite plaster.

Much of the authentic interior equipment, reflecting the representative function of the building, has remained in both museums, such as part of luminaires as well as storage and display cabinets. Entering the part of the current building of the Museum of M. K. Čiurlionis, the visitor is greeted by little changed cloakroom; but far less often people enter one of the most interesting rooms – a semi-circular auditorium set up in the main avant-corps, for which analogies in the Provisional Capital can only be found in the buildings of the Veterinary and Medical Universities. A monumental so-called chapel of Vytautas with a sculpture created by Vincas Grybas is situated in the main area of the Museum of War. The crypt for the deceased of dark marble was established in the basement of the museum in 1938. Such functional solutions of the building as the gable and pyramidal skylights as well as perfectly survived parquet are worth mentioning.

The building of the museum and the most significant memorial area of the country – its yard – is framed by the gallery of semi-circular arches of broken forms, which was supposed to increase the representative impression even more. It connects the main building to the carillon tower. Speaking about the tower, it’s worth remembering that it is one of the few verticals of the panorama of Naujamiestis of that time, competing with the domination of the Orthodox Church, which used be considered a symbol of oppression then. A recently restored sculpture of a warrior was set up at the top of the decorative buttress. Remembering that one of the authors of the ensemble is Karolis Reisonas, let us note that he is also responsible for the other two major modernist verticals in the city centre: the towers of the Resurrection Church and as well as the Evangelical Reformed Churches. According the project of the architect the pedestal of the Statue of Liberty was changed later, matching it to the general appearance of the ensemble. 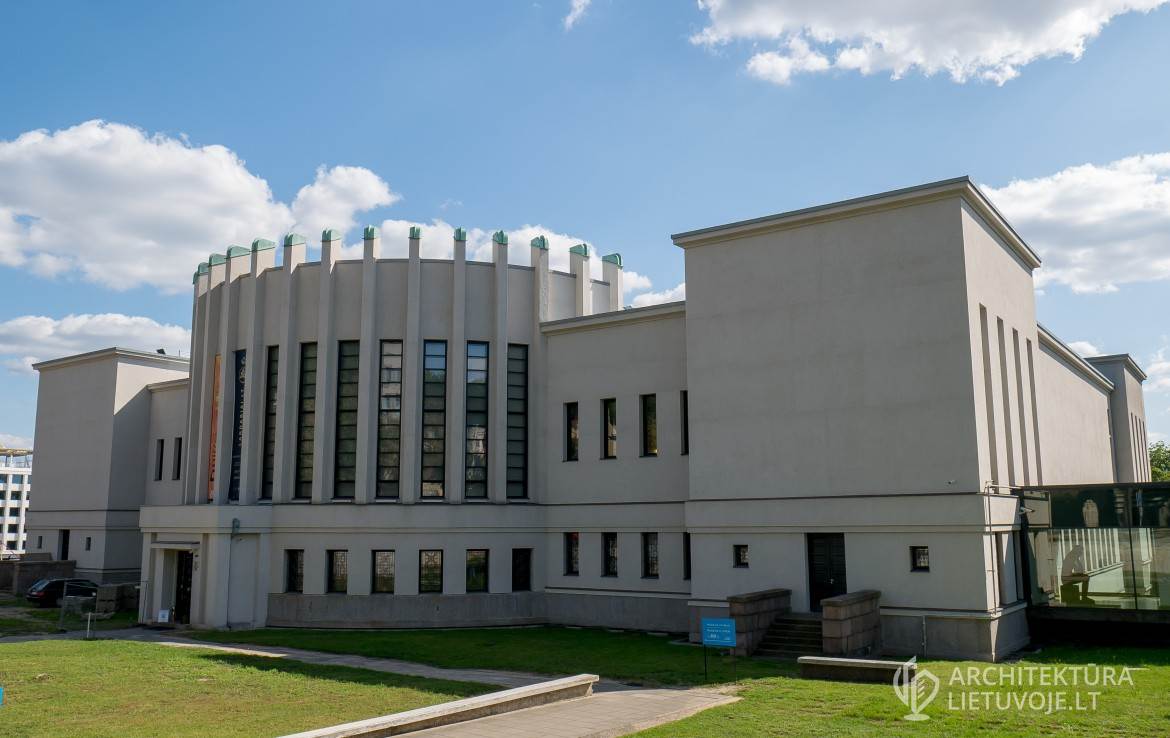 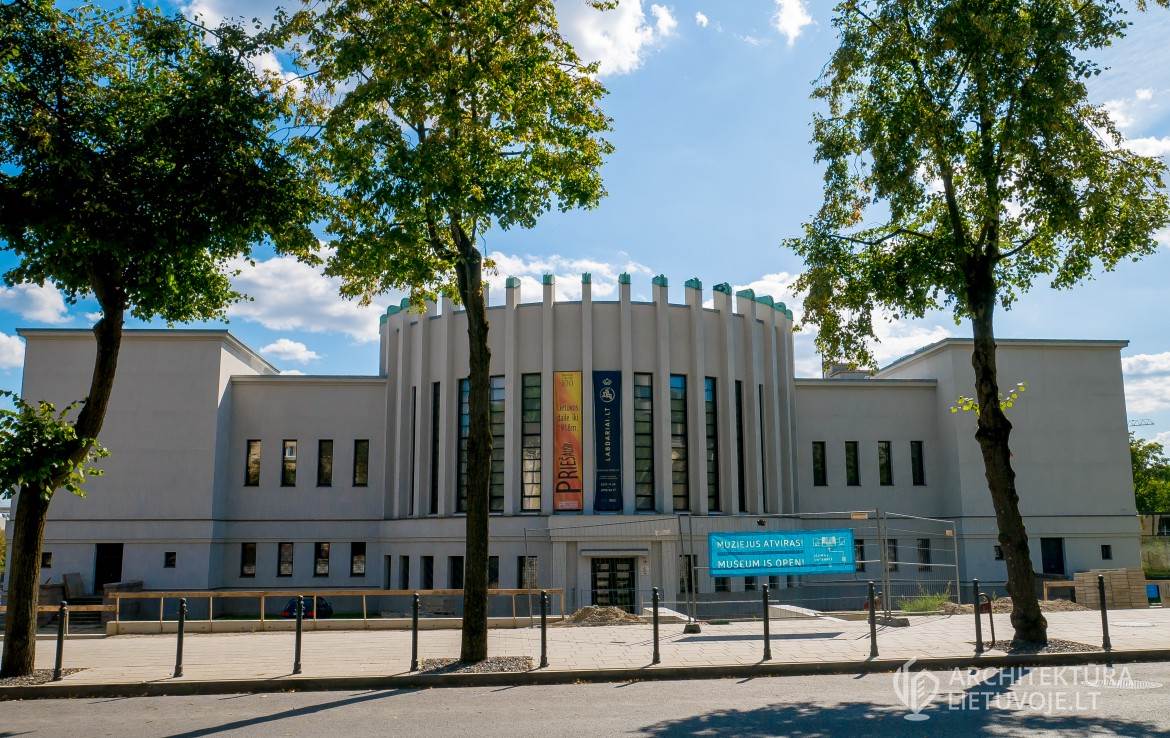 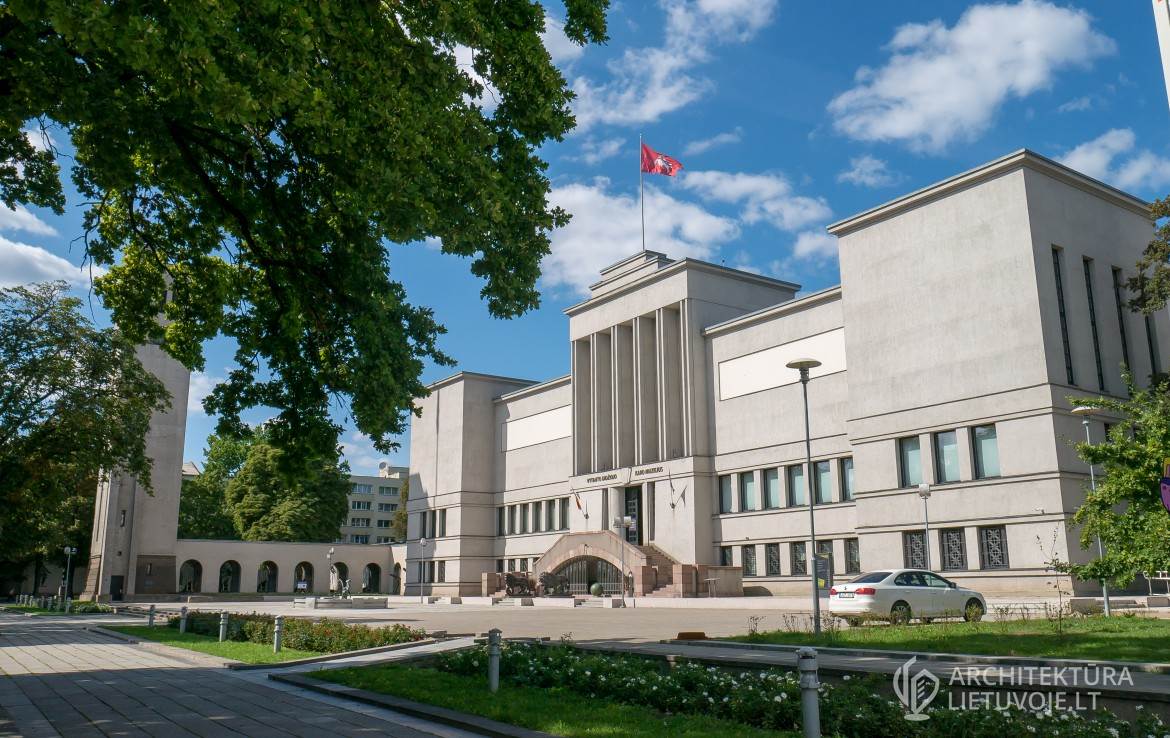 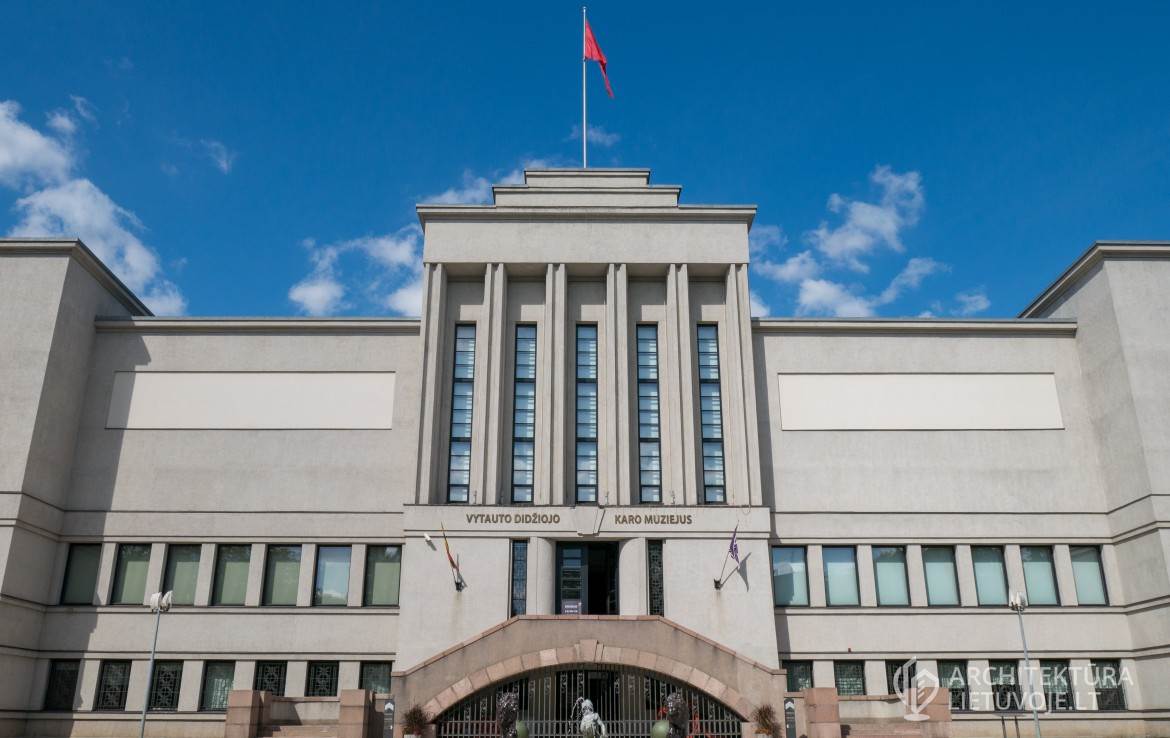 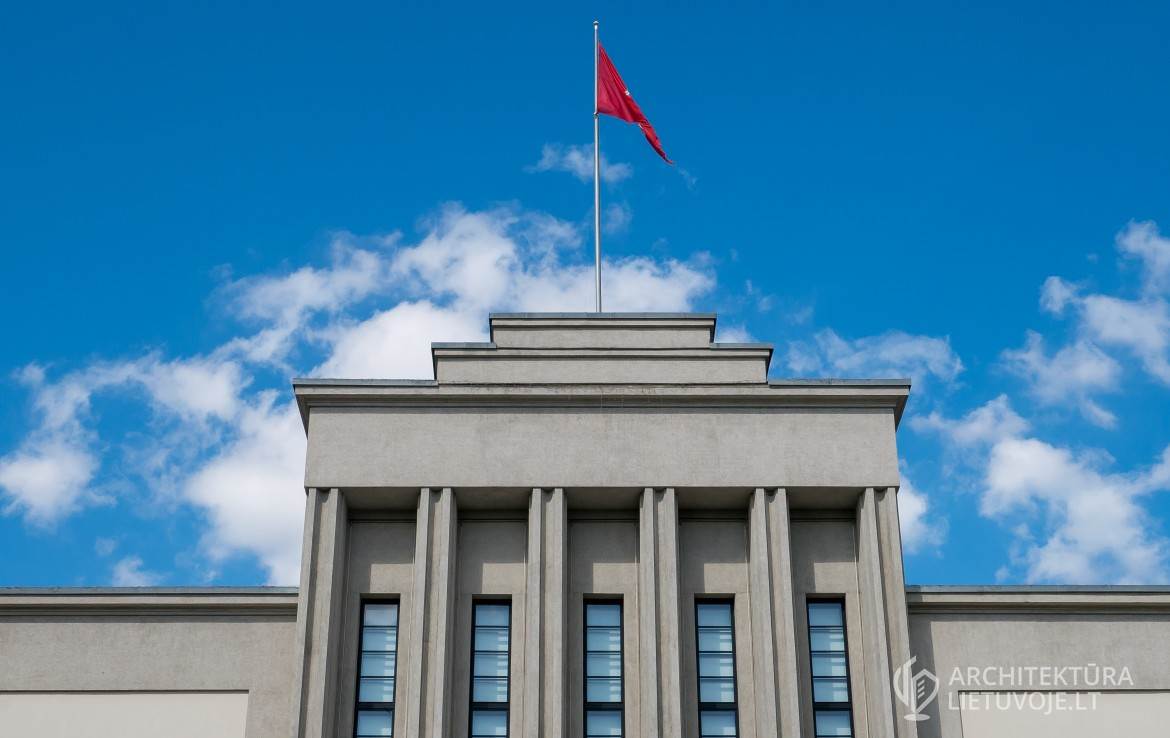 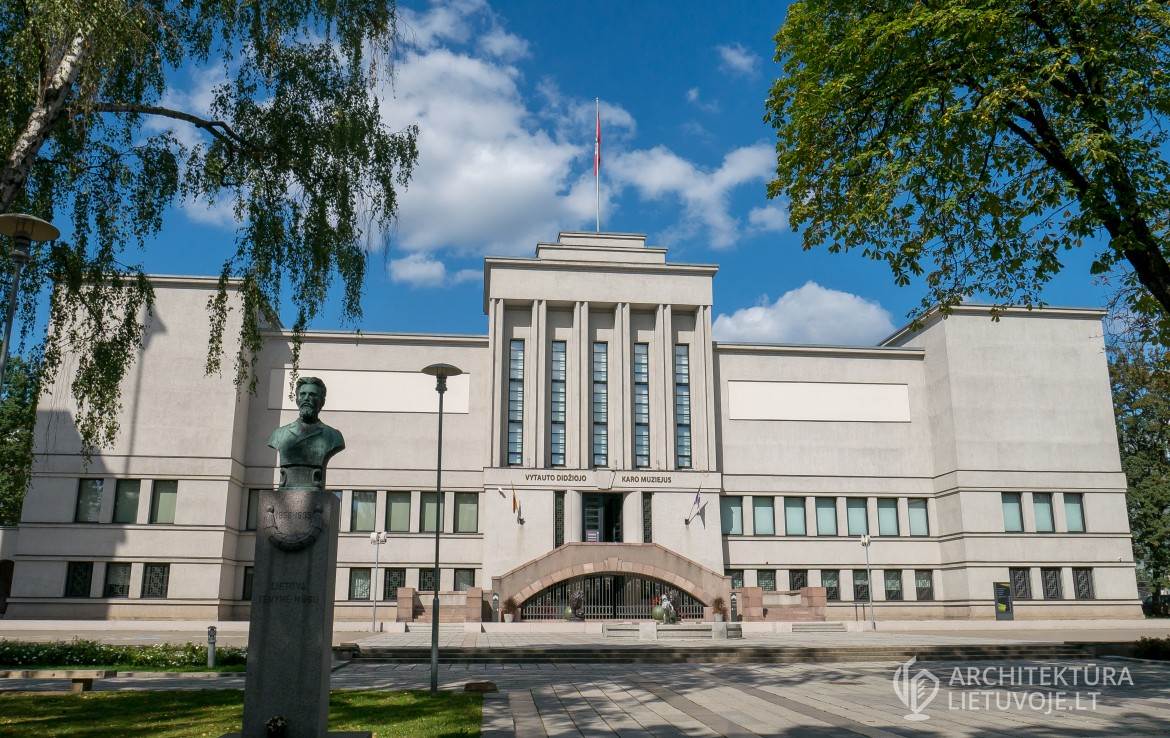 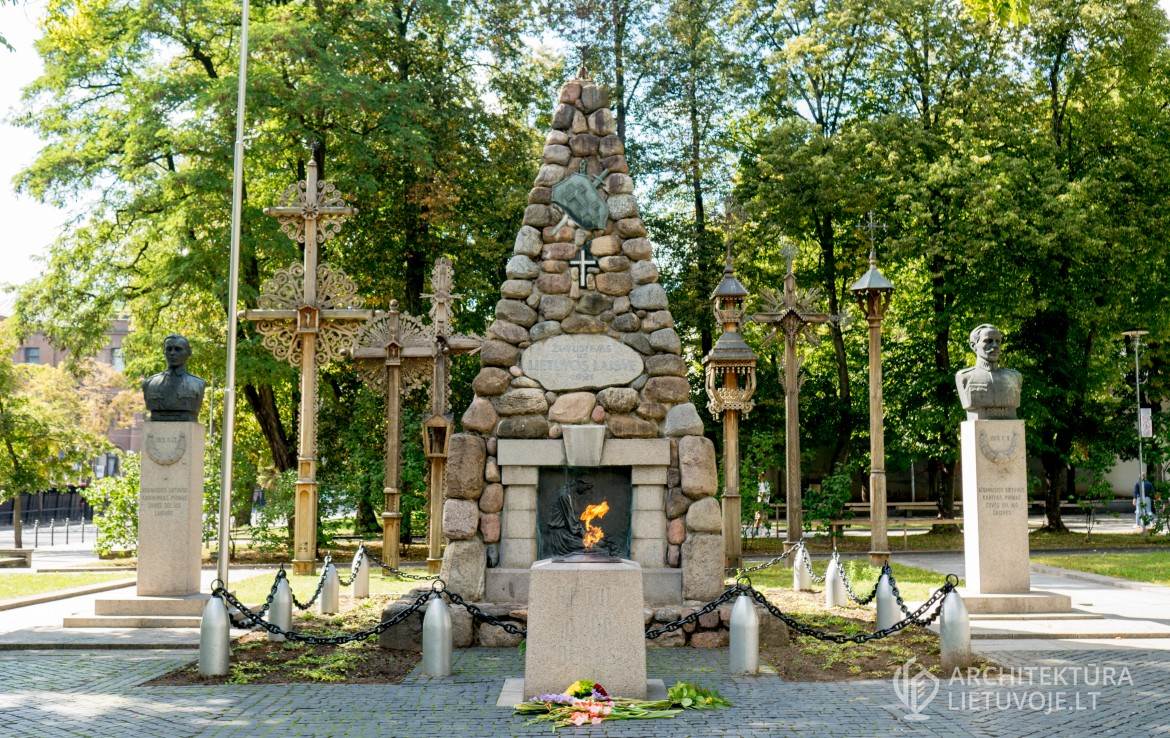 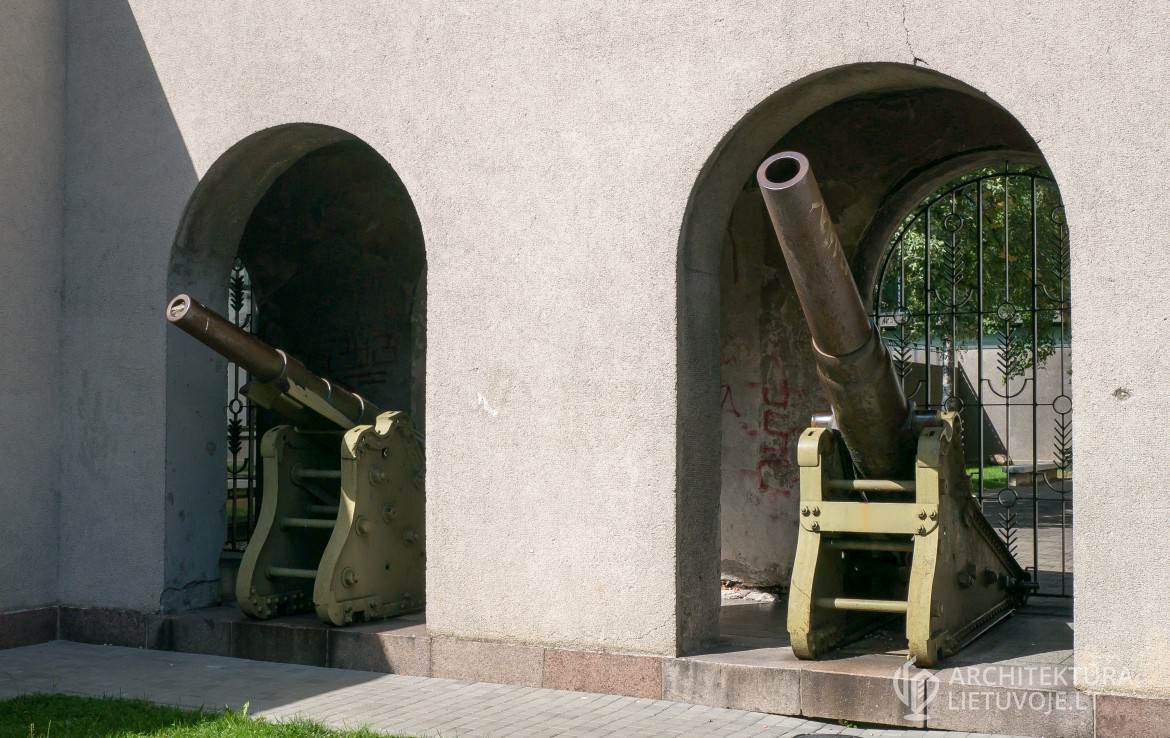 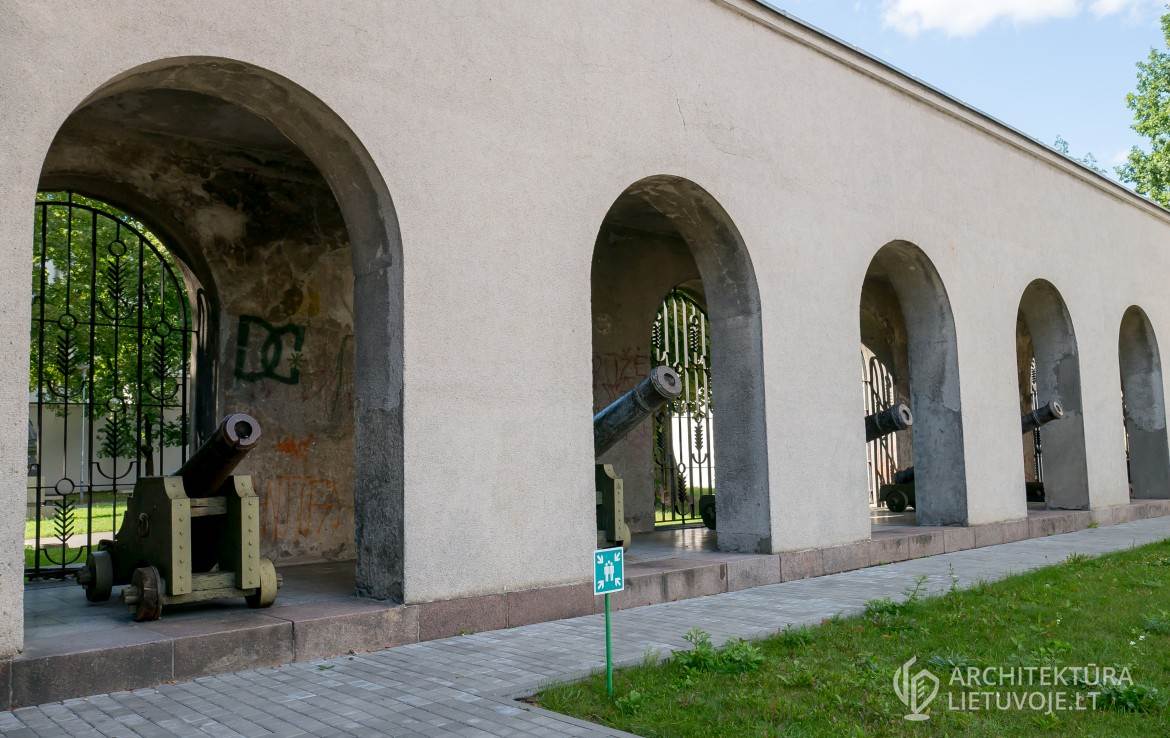 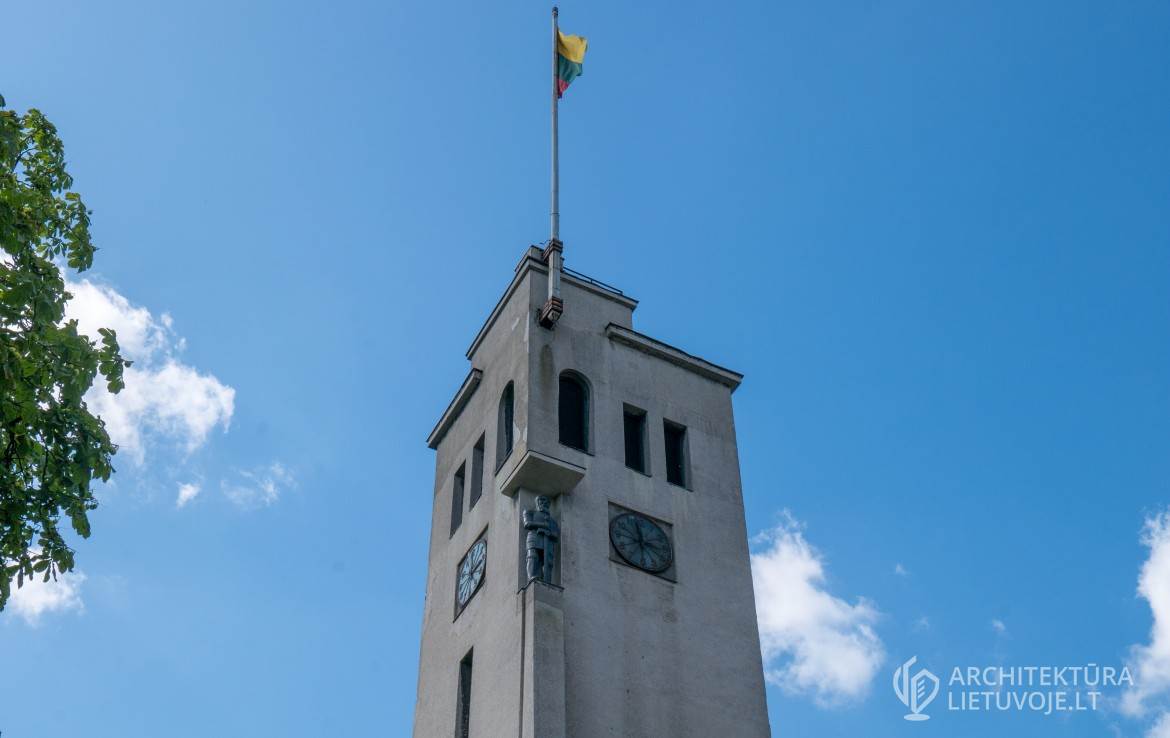 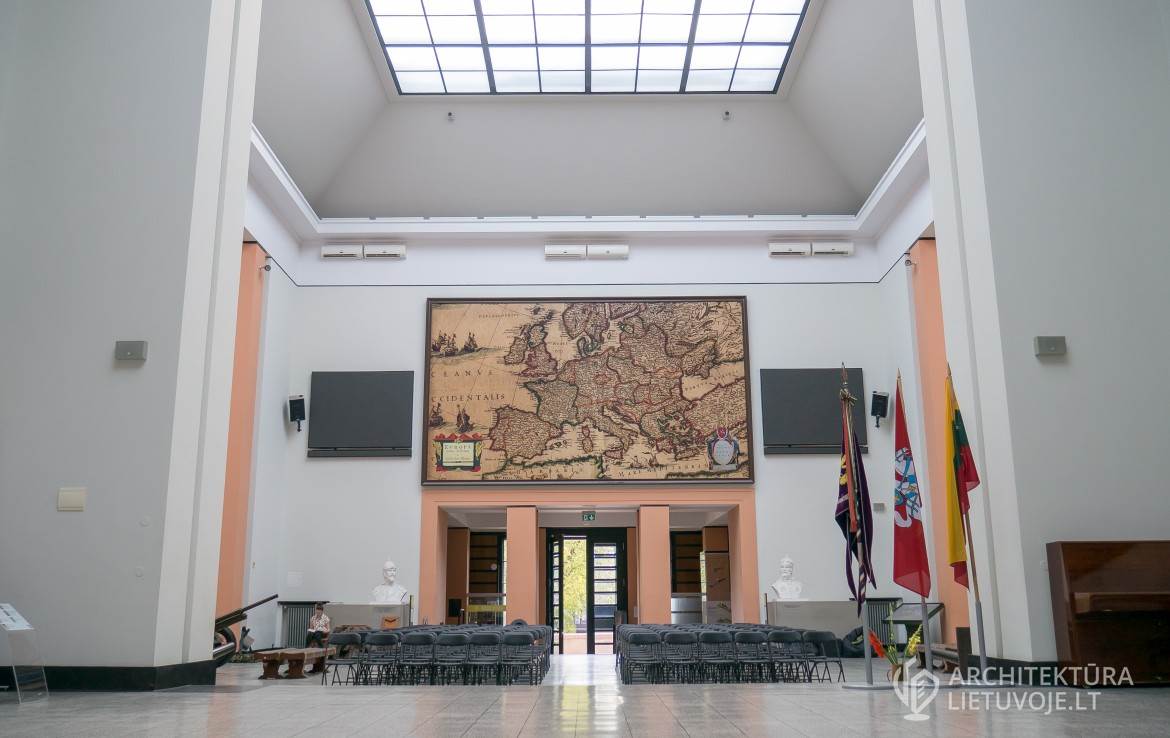 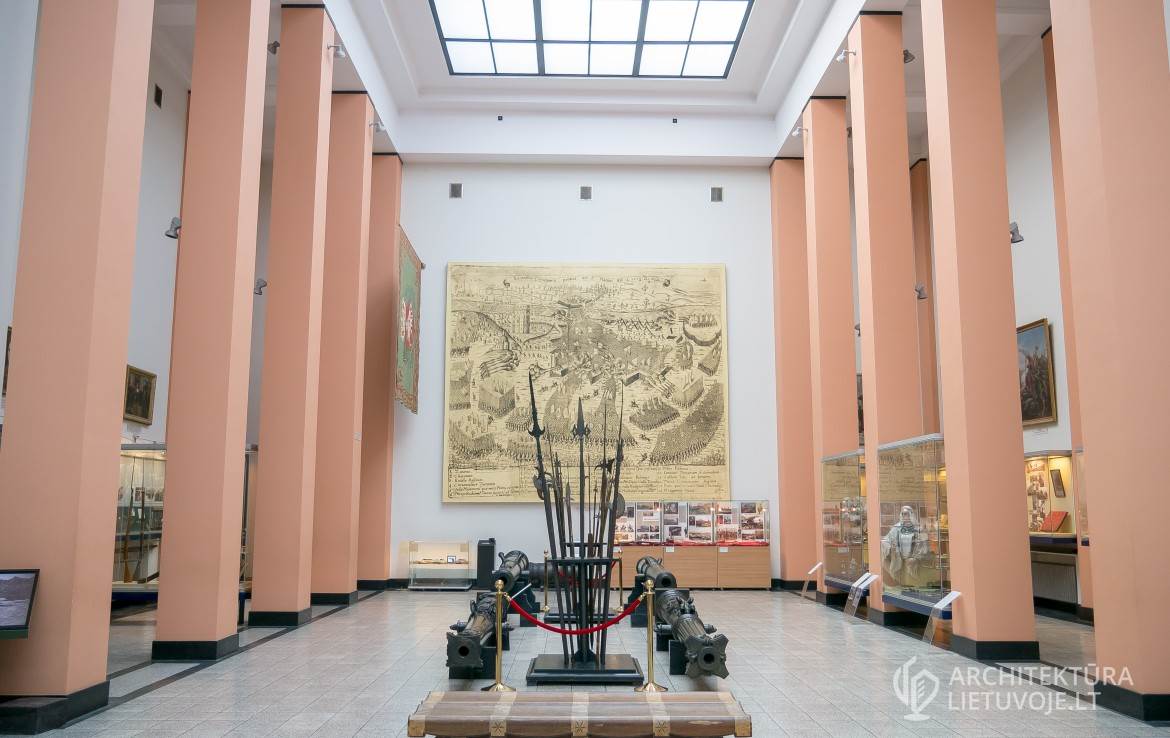 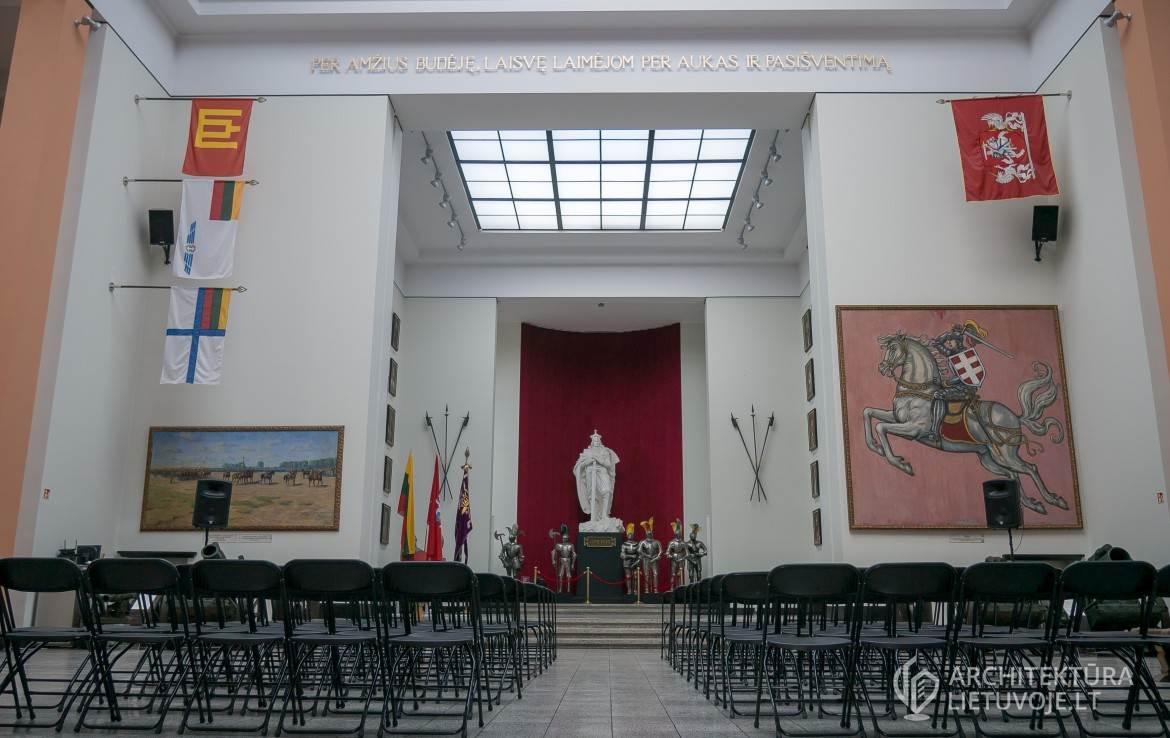 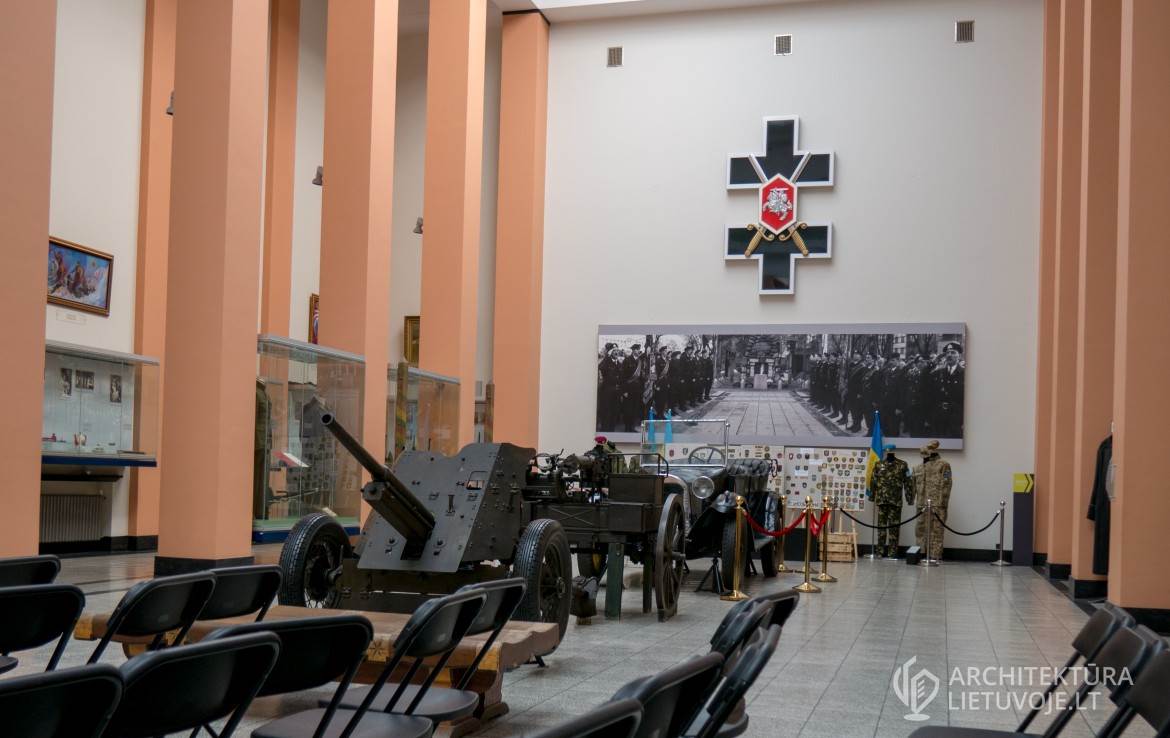 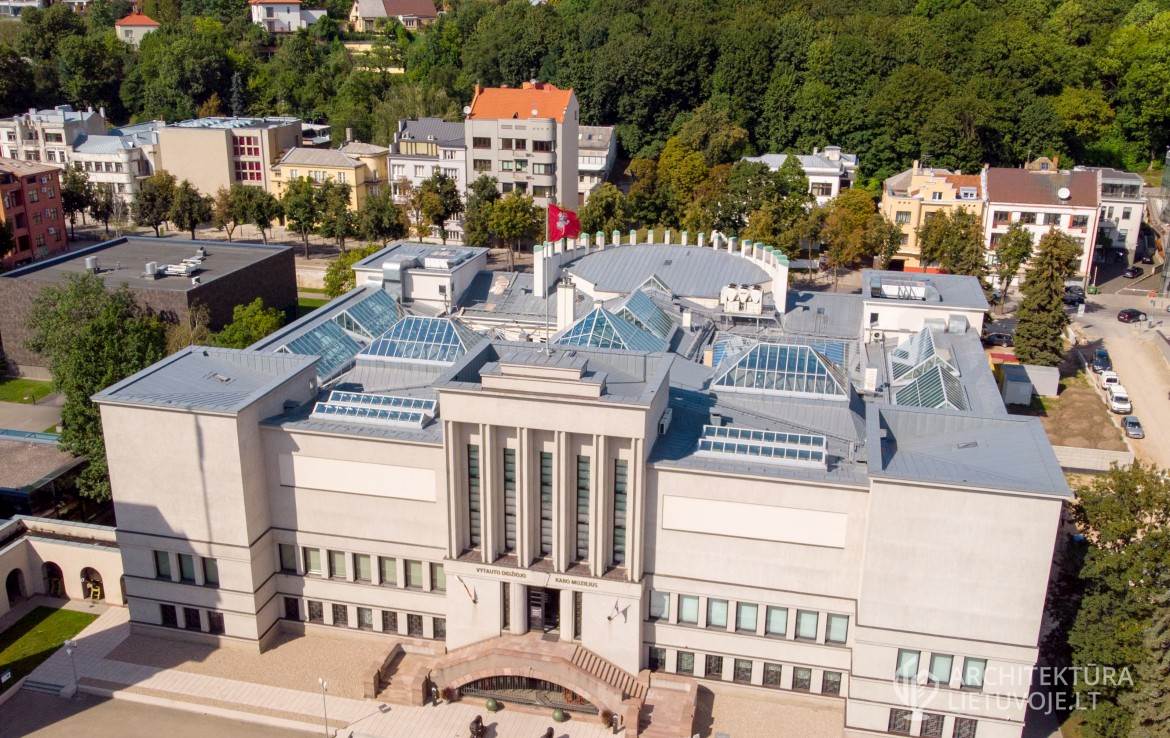 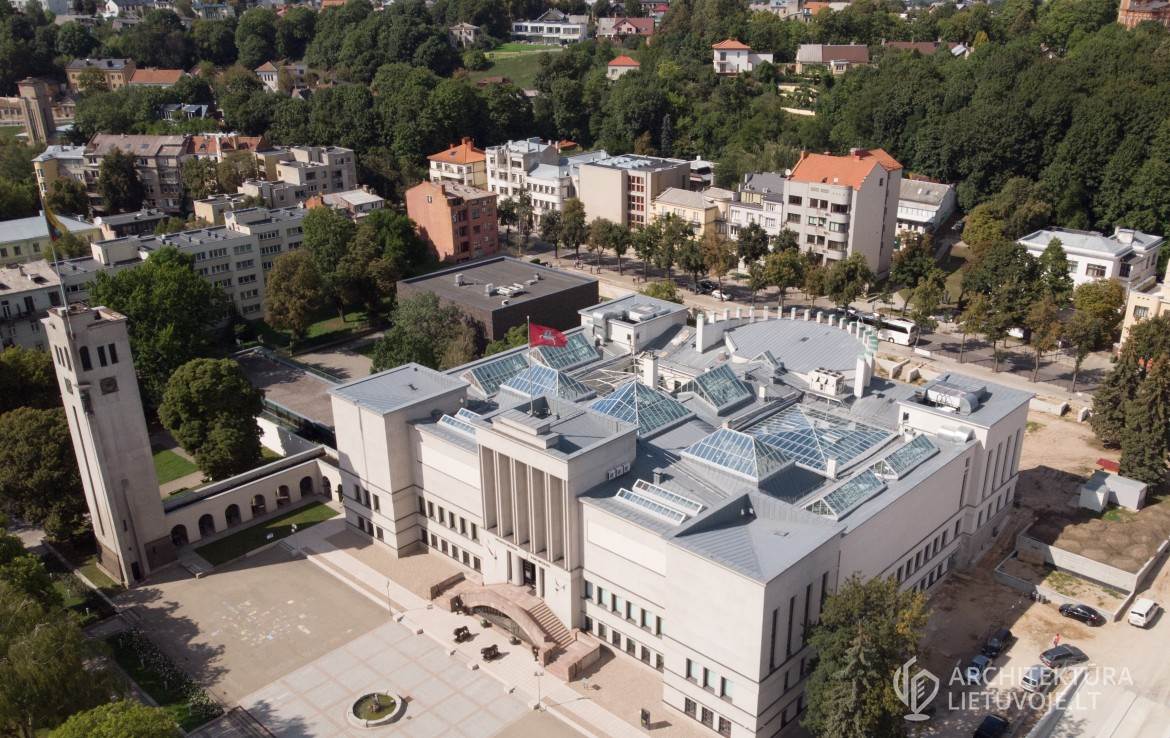