At the beginning of the 1920s, as few years have passed after the announcement of the Declaration of Independence of the February 16th, the idea of a sanctum symbolising the resurrection of the nation came to mind. Yet, it was not until 1926, that the idea began to take shape: it was exactly then, when a building construction committee was established and the city’s municipality donated a land plot in Žaliakalnis. Controversies were not avoided: the building was criticised for its juxtaposition of statehood and religion, it was proposed to construct the building more like a secular monument or even to build the sanctum in the place of the Kaunas Garrison Church, which then was held as a symbol of suppression. And yet, since the large part of the future Christ’s Resurrection Church was supposed to be built from donations, criticism did not have any actual weight. The tender, announced in 1928, was not successful: even the top projects were deemed not to have completely met the set conditions and ambitions. Karolis Reisonas, a third-place winner, has been entrusted with a preparation of a new project. The newly proposed impressive spiral-form building seemed too expensive and difficult to implement, so the architect, who already became the city’s senior architect, prepared a third project in 1933, based on an already modernist architectural expression: the sanctum’s foundation were laid on the same year.

Though the composition of the building is based on quite classical principles, but it’s worth remembering that the architecture of the Catholic sanctums in Lithuania was still quite conservative at that time. The fact that the church was designed using the ideals of modernism, marked a certain breaking point. The narrow window verticals, a flat roof, structures of reinforced concrete and the minimalistic décor reflected not only the canons of the modern architecture of that time, but a breaking point, which happened in the 1930s as well, when they became widely interpreted and used in the constructions in the country. Parts of the modern structural solutions were dictated by imminence: almost a thousand reinforced concrete poles were used when laying the foundation, because it was realised that the ground of that area is especially sandy and wet. The reinforced concrete was also abundantly used in other parts of the building: wall frames (filled with red bricks) and in the ceiling structure.

Religious and national narratives were supposed to abundantly intertwine in the sanctum: many symbolic elements should have reflected them both. For example, the large area behind the main altar should have been filled by a picture of 100 sq. m., in the upper part of which, the resurrection of Christ should have been depicted, and on the lower part – the rebirth of the nation. The then semi-official organ “Lietuvos Aidas” wrote of the future painting: “Behind the crooked Lithuanian crosses and chapels, the mighty Vytis shall rise from the villages returning to life. On the bottom, the mighty army of volunteers being born from the spirit of the Lithuanian heroes shall be depicted. The triumphant figure of the Christ’s Resurrection enlightened with bright rays and under the same rays – the Lithuanian nation rising from hundreds of years of sleep, shall constitute an impressive piece of art”.

It is interesting that one of the most important Art Nouveau accent – the flat roof of the building – was indirectly dictated by national aspects. According to the initial idea of the architecture, a chapel is set up in the smaller tower, dedicated to those who died for the independence of Lithuania, which was supposed to become a certain continuation of the most important memorial complex in the country – the garden of the War Museum. A prayer in the chapel was said for the homeland and those, who died for its independence, after the commemoration of the lost lives, which took place in the garden every evening; the eternal fire was also supposed to burn here. The architect, having taking the advices into consideration, simply drew a flat roof instead of a gabble one, so that not just few people, but thousands of people could come to the ceremony. What’s interesting is that the potential of the panoramic terrace was already highlighted back then. 14 altars, which should have not only depicted the Road of Suffering of Christ, but should have also been consistent with the “certain moments of suffering of the nation”, should have been installed on the roof. On the top of the great tower, a chapel of St. Casimir, the guardian of the country, should have appeared, to which one of the three intended elevators should take. The cellar of the church should have also served for the purpose of the folk stories – a crypt was foreseen here, for burial and relocation of the remains of the main figures of the country.

In 1934 the foundations of the church have already been laid: a stone cube, brought from the Mount of Olives, was cast in concrete during the sanctification ceremony and the president Antanas Smetona also participated in the event. In 1938 the walls have been finished, and until the World War II the building was completed at its full height. Though during the first years of the Soviet occupation it was discussed, what purpose should the uncompleted building serve; however, the decision has not been made. During the German period it was planned to continue with the construction, but the deprivation of war caused discontinuation, and the building carried its indirect strategic function of paper storage. In 1952, according to the directive of Stalin, Kaunas Radio Factory was set up here, the main area of the building was divided into five floors with the help of partitions and the windows were minimized. Despite the fact that the building could not be plastered anyway, the building was still one of the main sights of the city’s panorama, seen from many different parts of the city – this was counterbalanced by adapting the tower to the propaganda slogans.  In the wake of the dawn of independence, in 1989, Henrikas Žukauskas and ALL the specialists of the reinforced concrete cathedral have prepared a church reconstruction project, the final stage of which was prepared by A. Sprindys. H. Žukauskas remembers that during the Soviet period, the re-designs made by the Lithuanian architect where done in a respectable manner: the invasive ceilings were constructed in such a way that they could be dismantled easily, almost structurally independent from the older parts of the building. The sanctum opened its doors only in 2006, with some deviations from the original ideas: for example, folk links on the terrace and roof chapel were abandoned, the chapel of the great tower was not implemented, the three altars were replaced by a single one, and a columbarium and a chapel were set up instead of crypts.

The three naves of the interior of the building are split by two rows of six elegant columns, an organ gallery of complex design is located above the entrance; it is complemented by upper galleries on both sides of the building. The entrances to the building are highlighted with horizontal fillets from the outside and especially expressed in the main portal. Octagonal windows are incorporated in lateral parts of the main façade and polygonal windows of complex form – in the tower. Their fine splitting brings vigour to the building and visually makes it much higher. Other aspects contribute to the latter effect, such as the rhythm of upward narrowing windows in both the great and the small towers. Gracefulness and monumentality, among other things, are enhanced by the fine rhythm of pilasters and windows in the lower section of the lateral façades, and the pointedness of openings of windows of the volume of the great nave in the upper part.  The church tower with its cross rises to the height of 70 metres, and the observation coverage is quite impressive: on a sunny day the verticals of the Elektrėnai power plant can be seen. 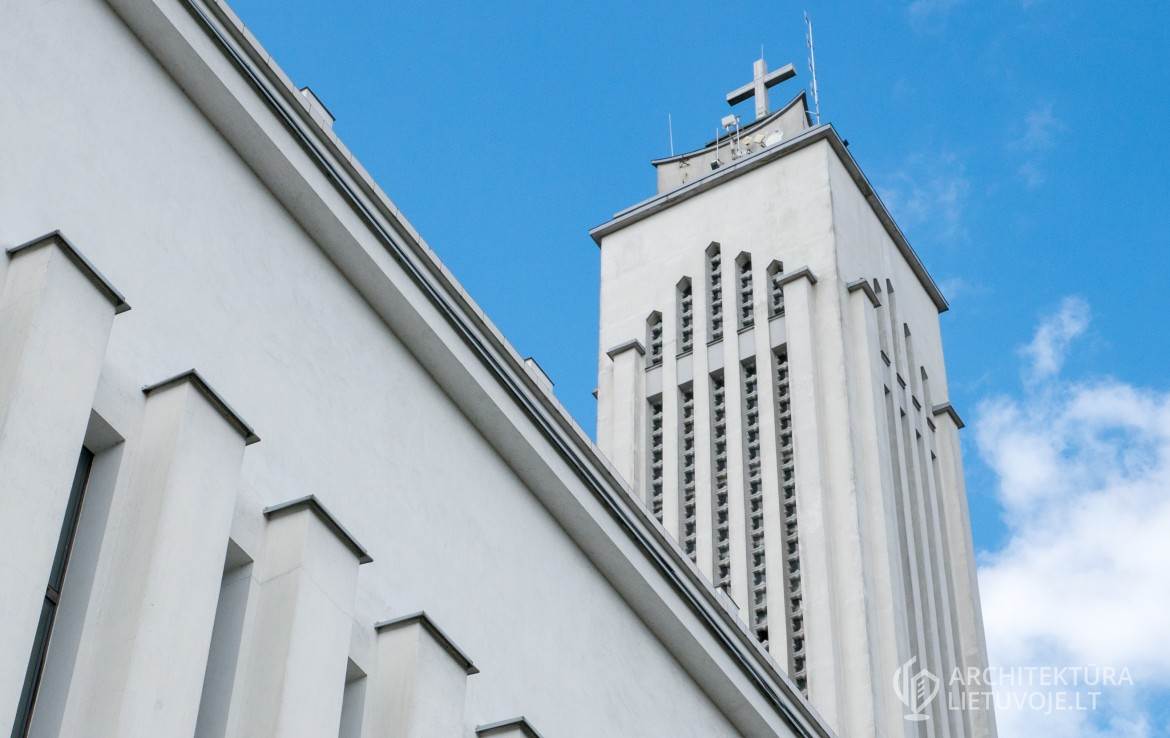 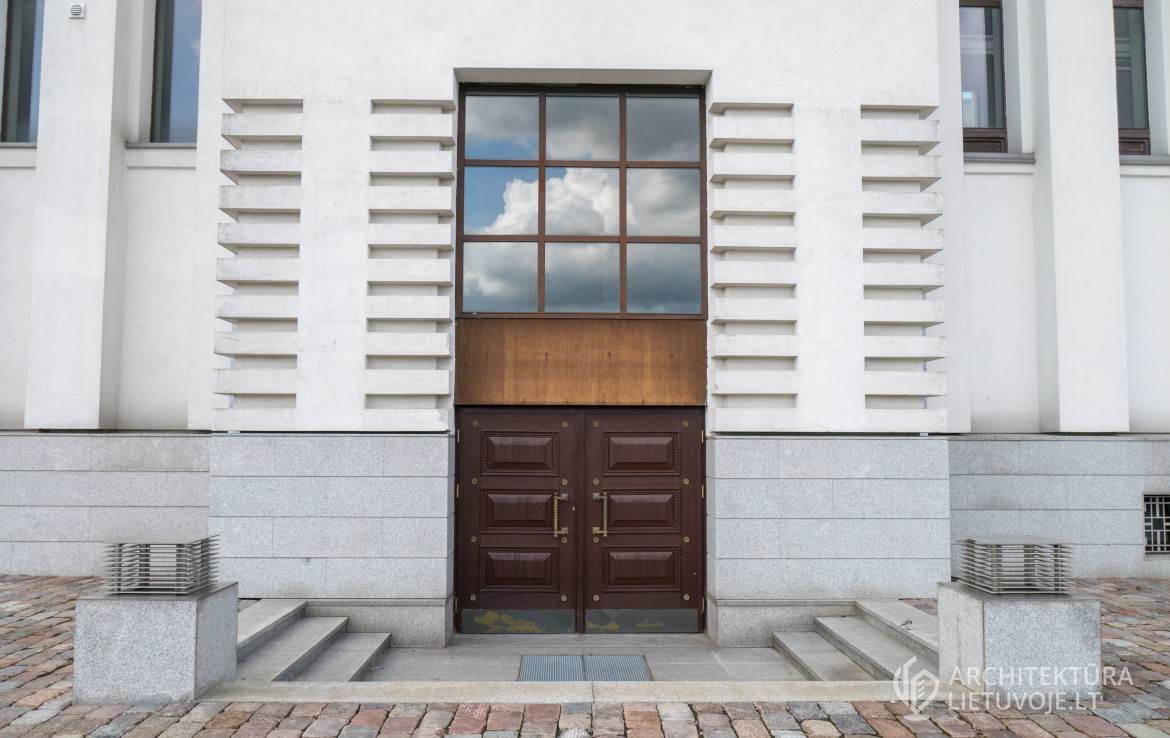 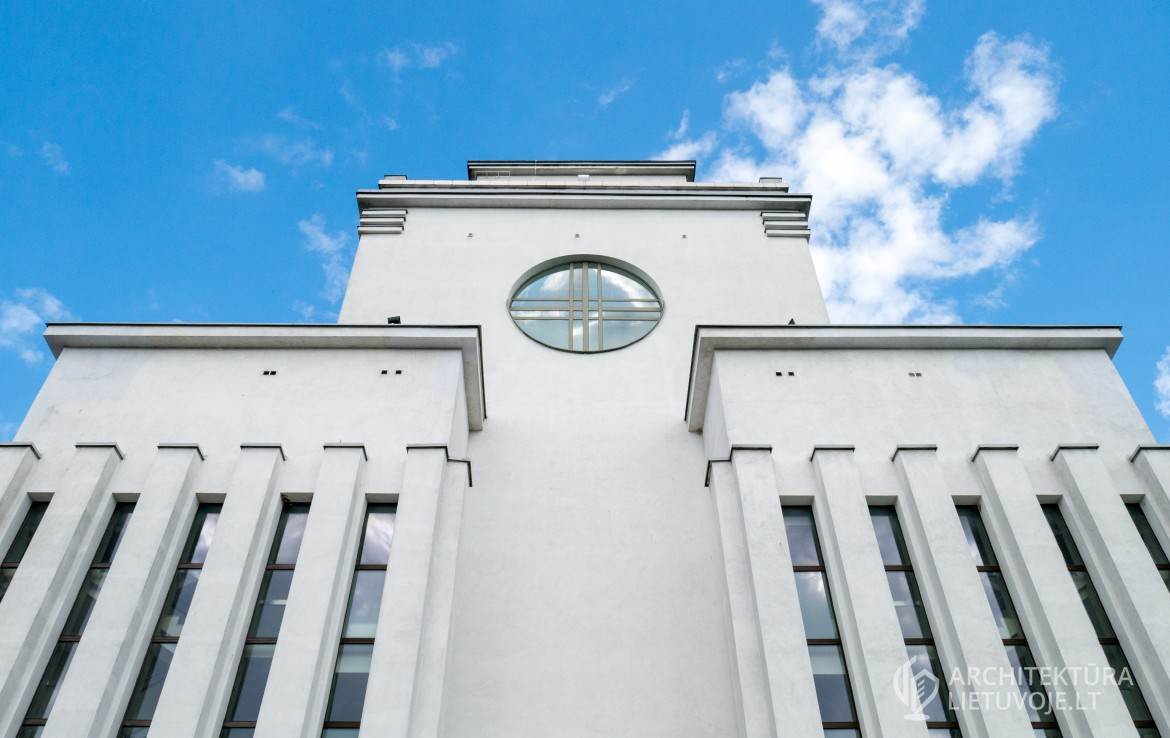 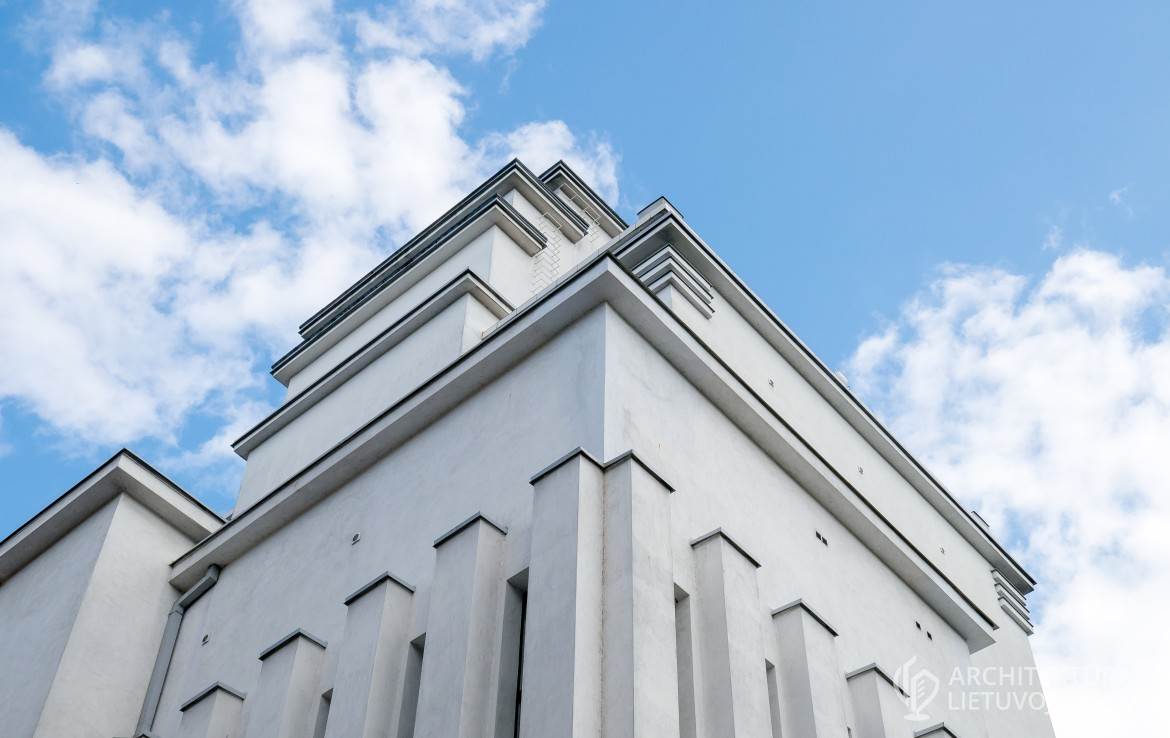 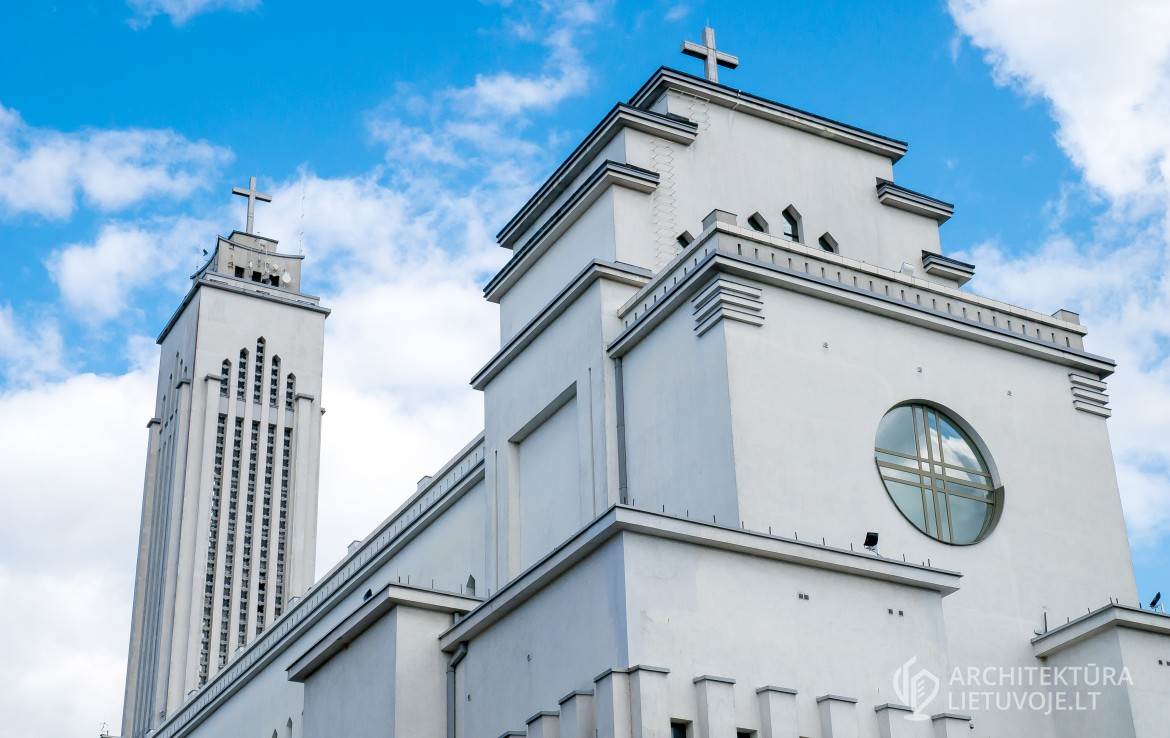 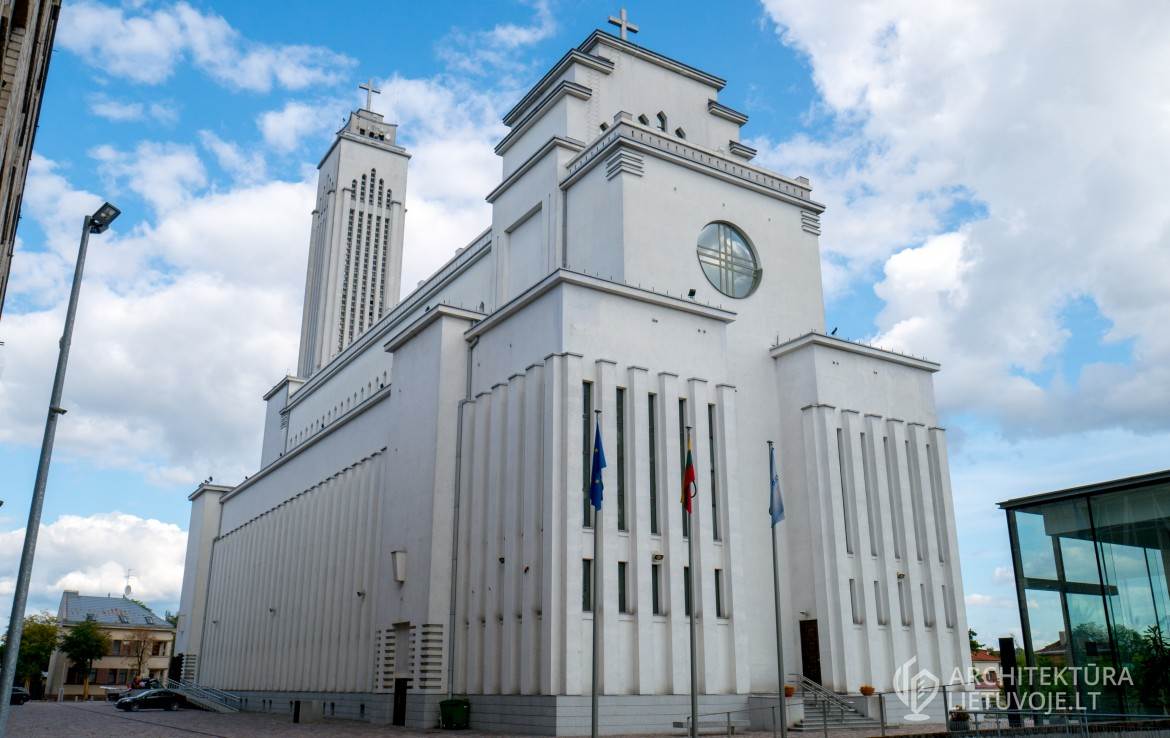 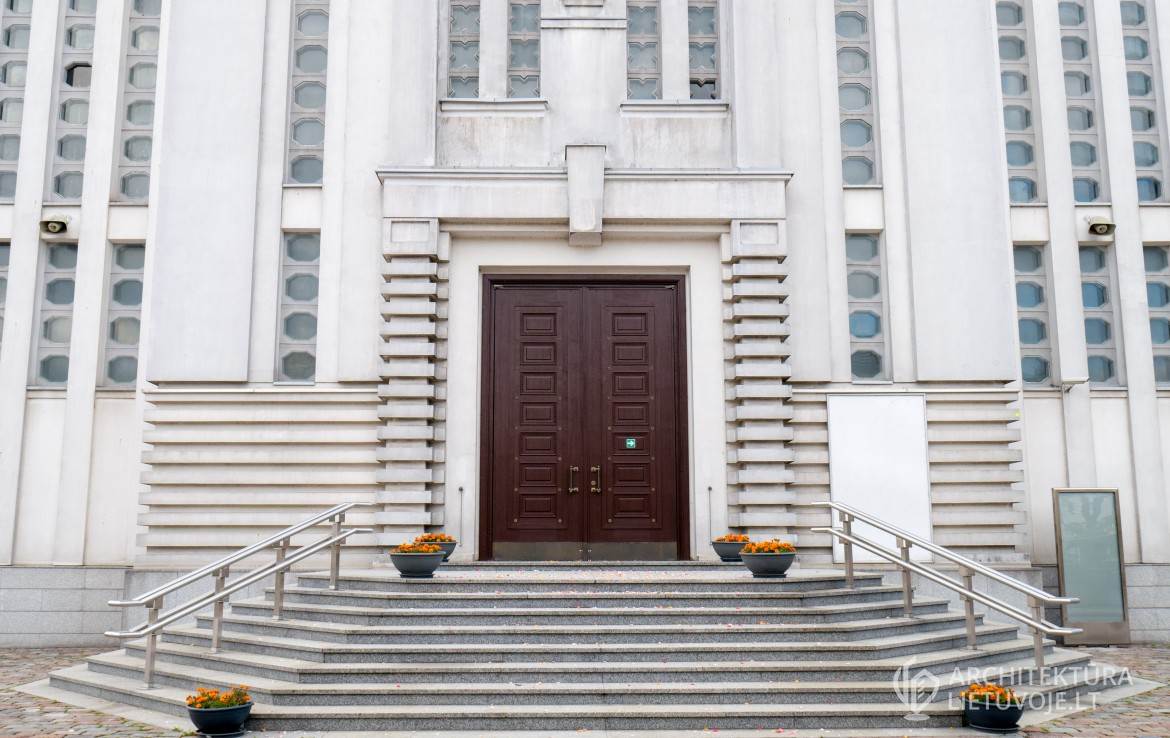 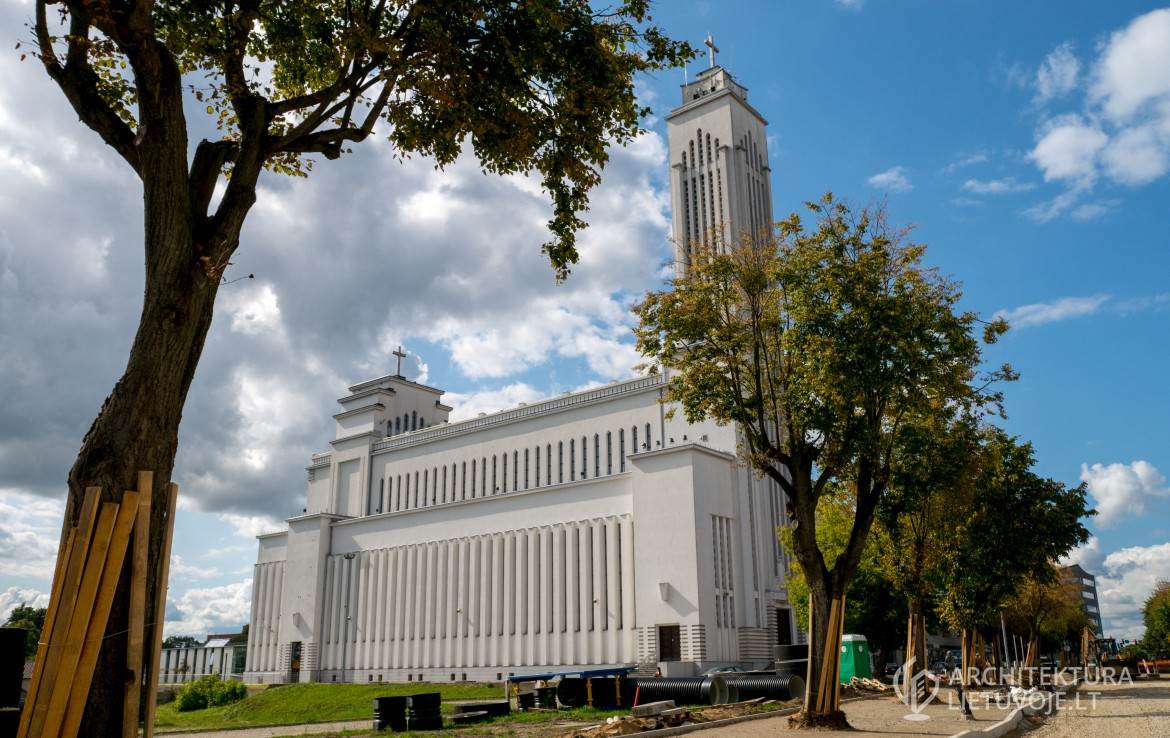 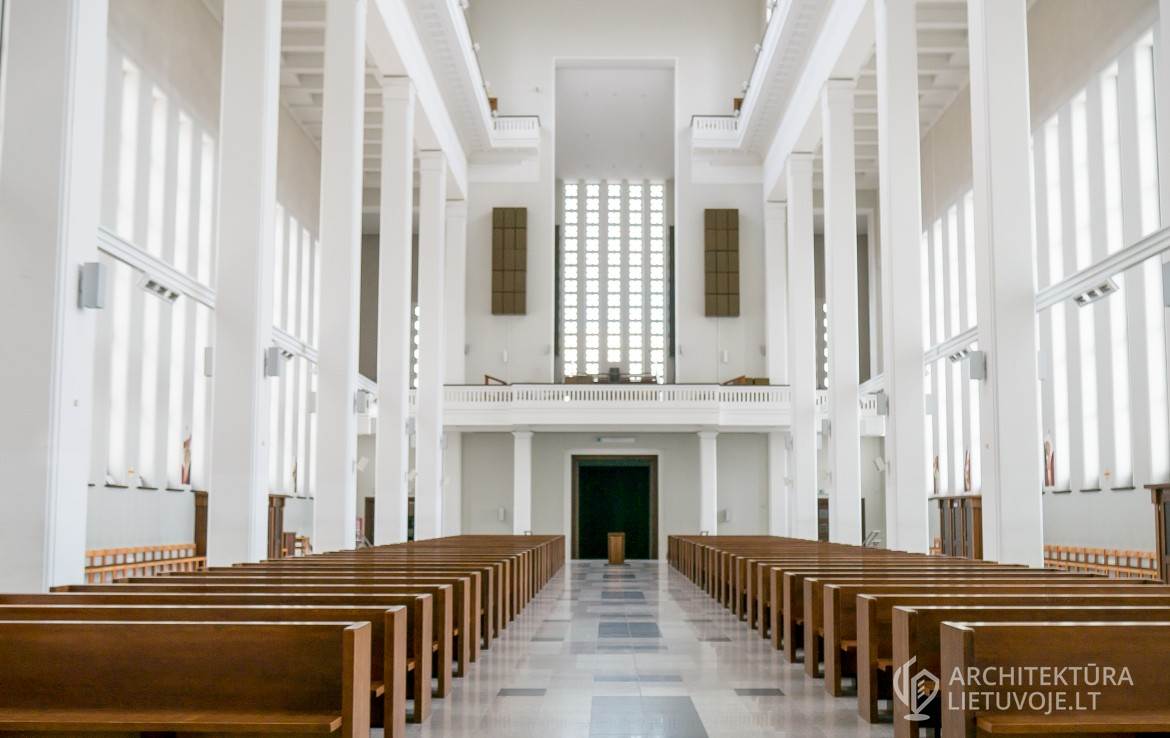 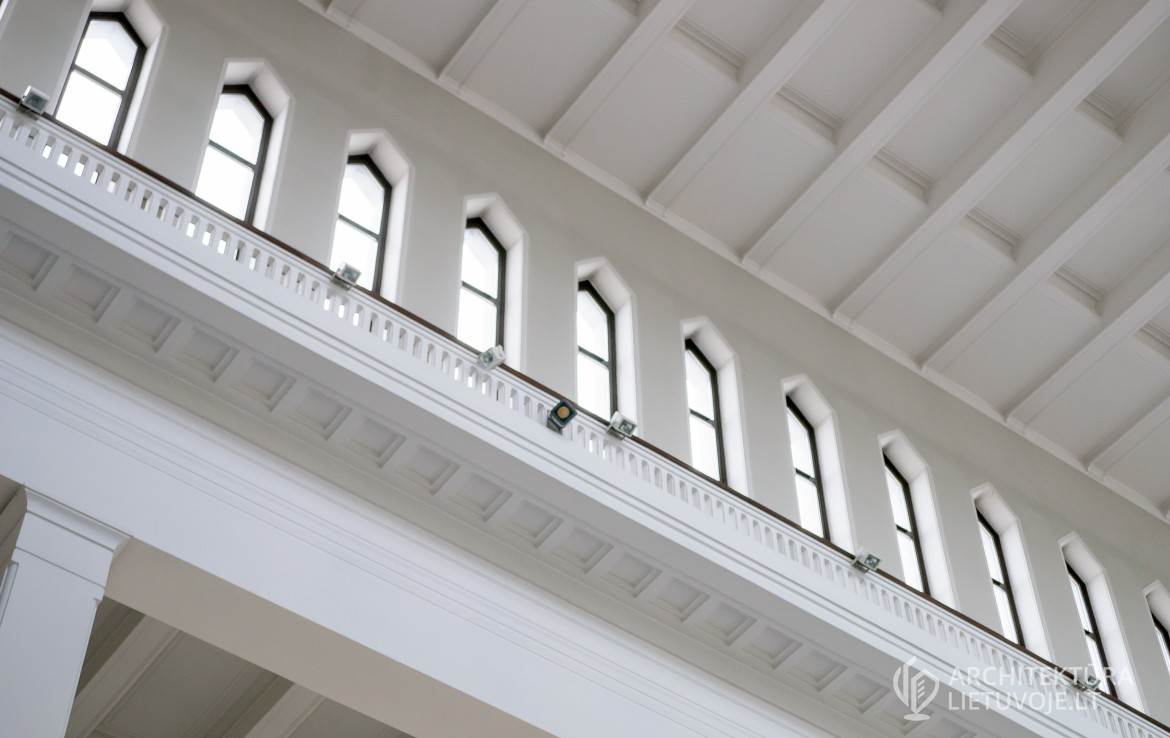 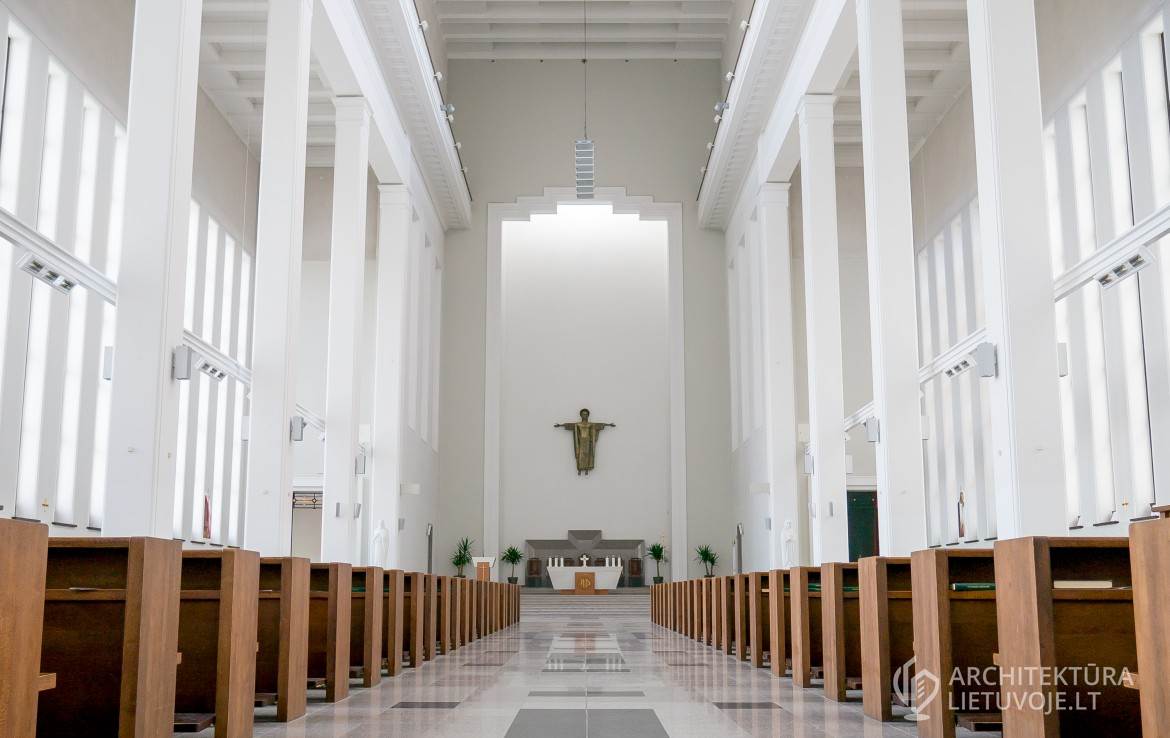 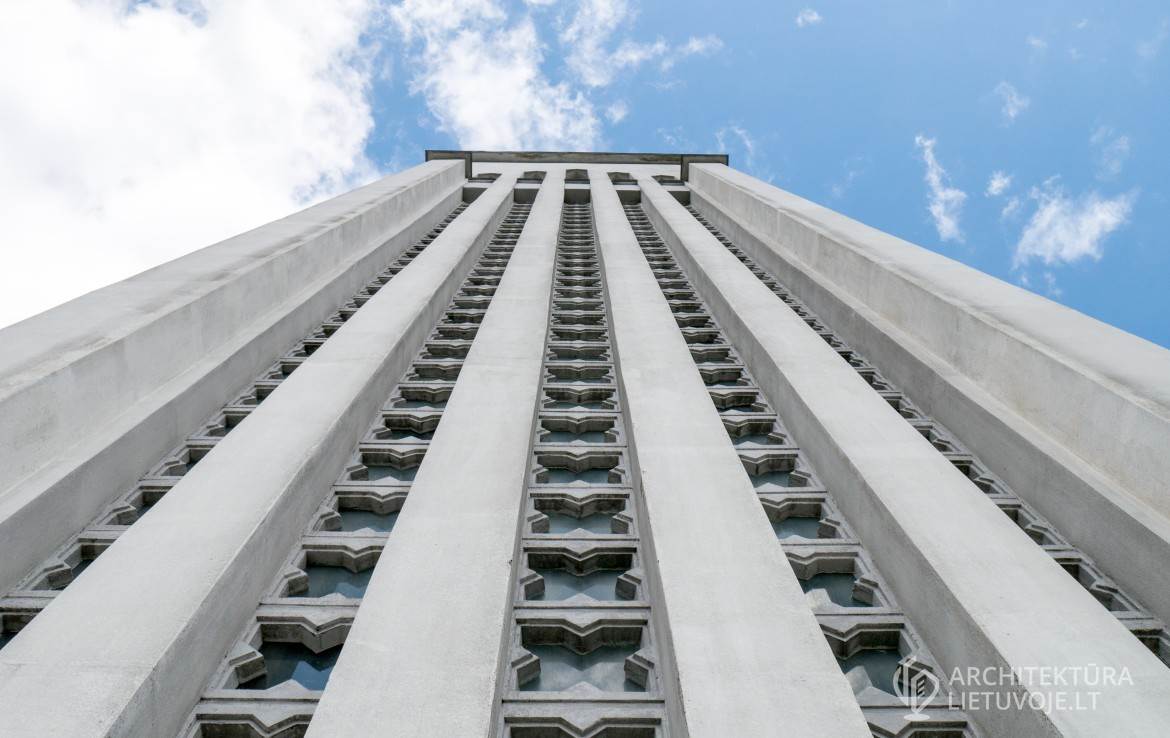 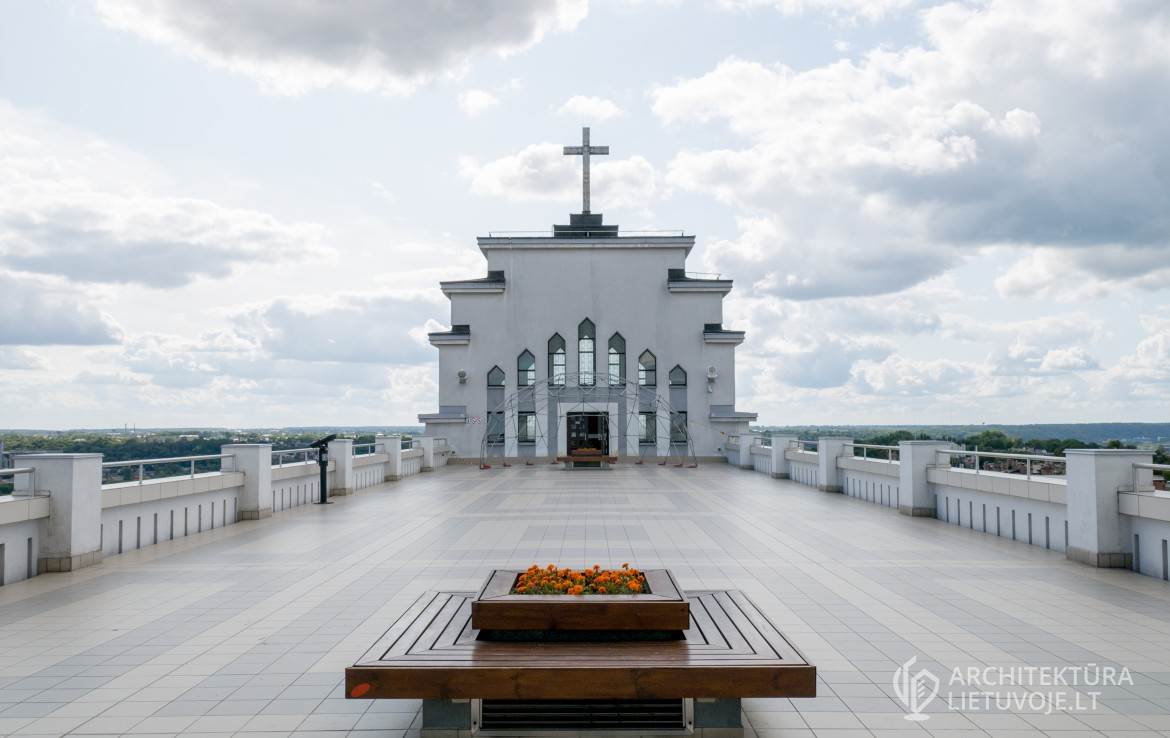 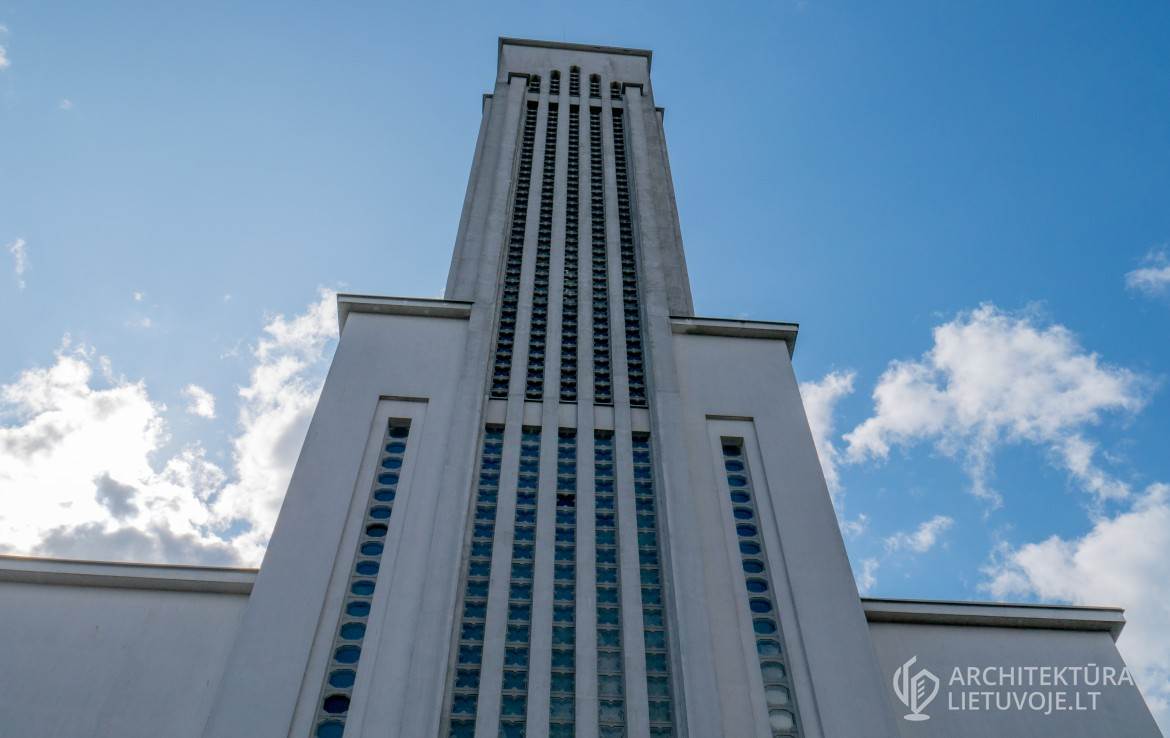 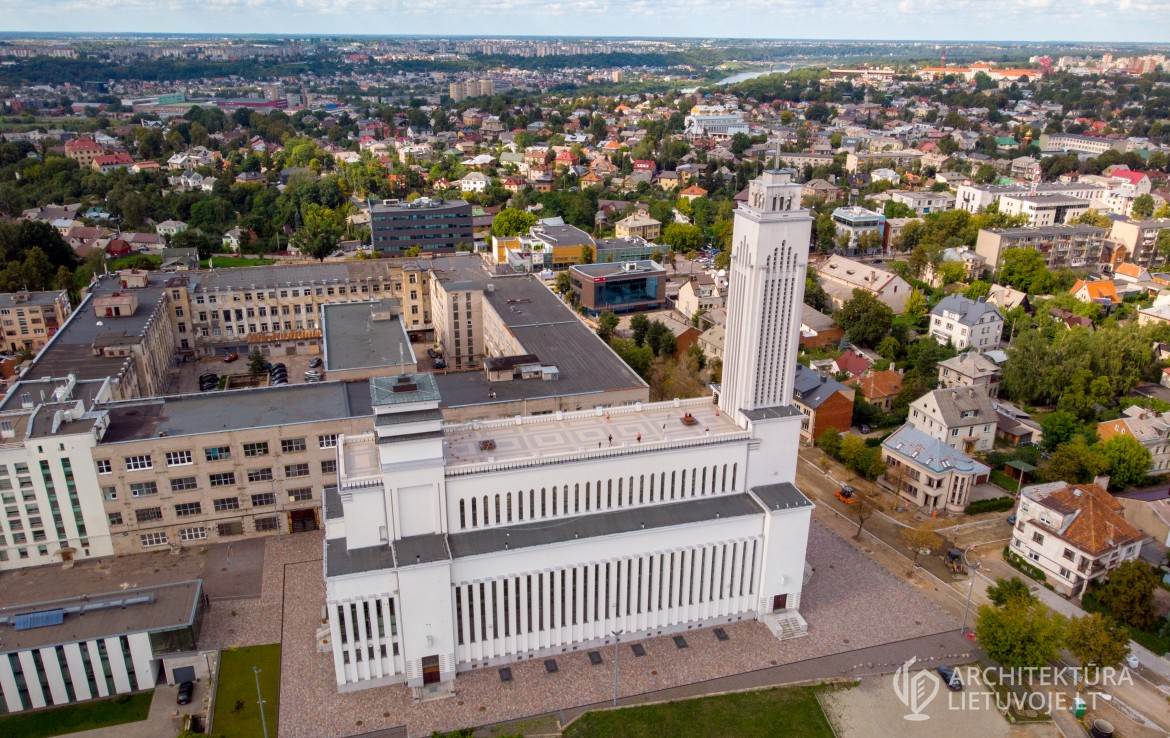 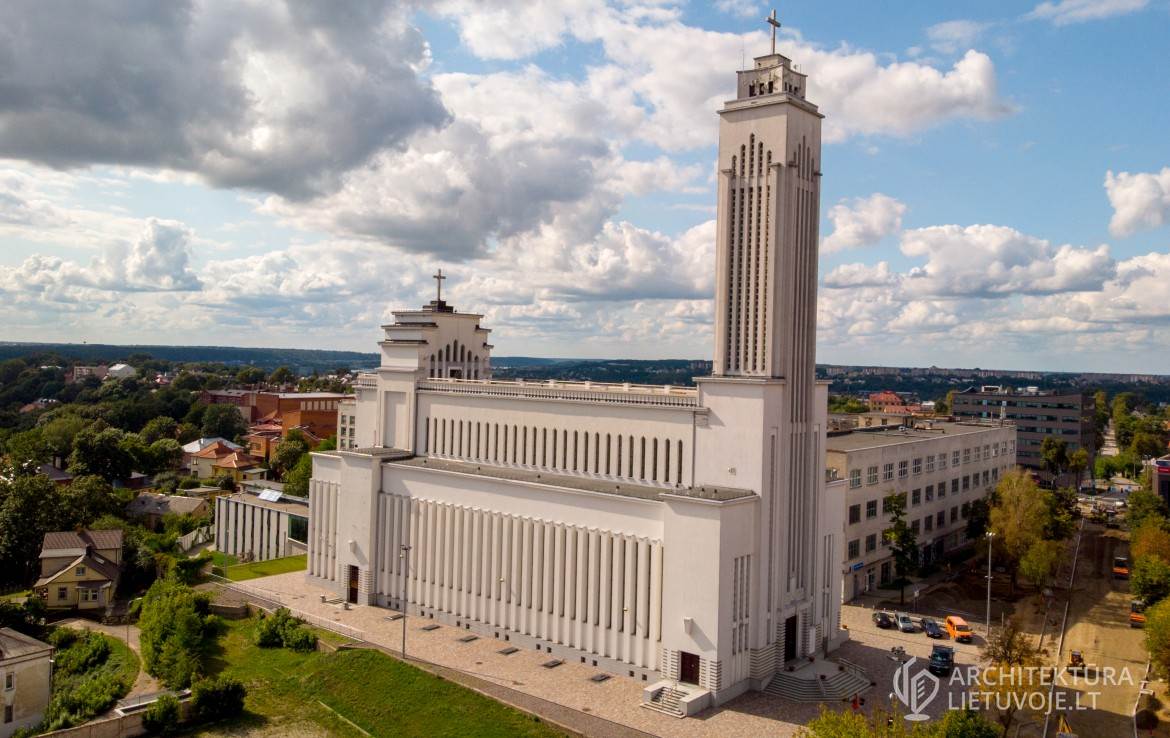