The Complex of Kaunas Jesuit Monastery

We usually associate the Baroque architecture with Vilnius and with the unique branch of the style which started to spread from here. Kaunas, in turn, is proud to have an abundance of Gothic architecture reminding of the period of the city’s prosperity. And yet, three Baroque towers catch our eye in the panorama of the Old Town of Kaunas. Two of them rise up above the only ensemble of buildings in the historic part of the city preserving the Baroque spirit: the complex of the Jesuit Monastery. It’s no coincidence: the Baroque is closely related to the Counter-Reformation and probably the most important members of it – the monks of the Jesuit Order. The decorativeness of the style serves as a counter-balance to the asceticism spreading in Reformed sanctums.

After the fire in the second half of the 17th century, the Jesuits bought the plots around their own one for the construction of the new church and the monastery. The construction of the complex has taken very long; the works were stopped due to various circumstances. The original church was lower, and in its scale it was more in line with the two-storey buildings of the monastery and the college: the towers used to be only of three sections, and, as it is believed, only their spires rose above the pediment. The church was consecrated only in 1722, though the ensemble was destroyed by the fire several decades later. After that, in the middle of the decade, the church gained its current appearance: the towers were raised, and the interior was set up. After the old Jesuit Order was disbanded, the history of the complex was relatively diverse: the church was assigned to the Franciscans, and in the Tsarist period it was transformed into an orthodox church. A secular school was established in the former college. The Jesuits returned here only in 1923; however, the Soviet period came soon afterwards: the school became secular once more, and the gym was established in the church. The Jesuits returned here again in 1991.

The three-section façade attributable to the late Baroque is horizontally divided by the profiled cornices, and vertically – by the double-edged pilasters “framing” the corners of the towers as well as the inner sides. Pilasters are also significant in the composition of the middle part of the façade: the smaller ones form the portal of the main entrance with the cornice with a “cut” middle part typical of that period. Much smaller, graceful pilasters can be seen in the second section. The pilasters of the third section replicate those seen in the lateral parts of the church: it’s like they are holding a rather simple triangular pediment. High semi-circular niche is incorporated between them, where the balcony is situated. The size of the windows and niches differ: it’s one of the characteristics of the Baroque. Probably the most “lively” parts of the church baroquely are the fourth and the fifth section of the tower attached later: rotated angular pilasters, curves of the cornices, volutes of the upper section as well as the form of the roofs gave a touch of dynamism to the expression of the church. During the restoration of the sanctum in 2016 the three remaining frescoes of the Baroque period have been revealed. As was typical of the decorative Baroque period, the painted décor formed an essential part of the architectural expression of the façade. The impression can be made of the restored appearance of the pilasters of the second section of the middle part.

Only few surviving painted elements, the most impressive of which can be seen at the door of the eastern sacristy, can give us some indication as to the original interior décor of the rectangular, basilica three-nave sanctum today. Pillars connected by the semi-circular arches, dividing the area into naves, are completed at the top by the large profiled cornice surrounding the middle arch. It provides the area with the monumentality, and it’s as if leading towards the presbyterian part. Namely here we can see the most impressive accent of the church: the central Baroque Altar of the Crucified Jesus taking almost the entire height of it, which was created in 1754 by the specialist in artificial marble, Jonas Kerneris.

The church is surrounded on both sides by the buildings of former monastery and college, very similar to each other for their architectural expression, which used to be a typical part of Jesuit ensembles. Although the buildings have been reconstructed several times, the vertical division of the façades by pilasters still remained, as well as the cornice strip and the architraves of the windows of the first floor. Entering the former monastery building surrounding the left side of the church we can see that its layout as well as vaulted premises are still full of authentic spirit of the monastery of those times. Two storeys have been attached to both buildings “framing” the church during the early interwar period: the solution, which by its scale distorted the building integrity of not only the ensemble but of the entire Rotušė square, was heavily criticized by the architects of that time. 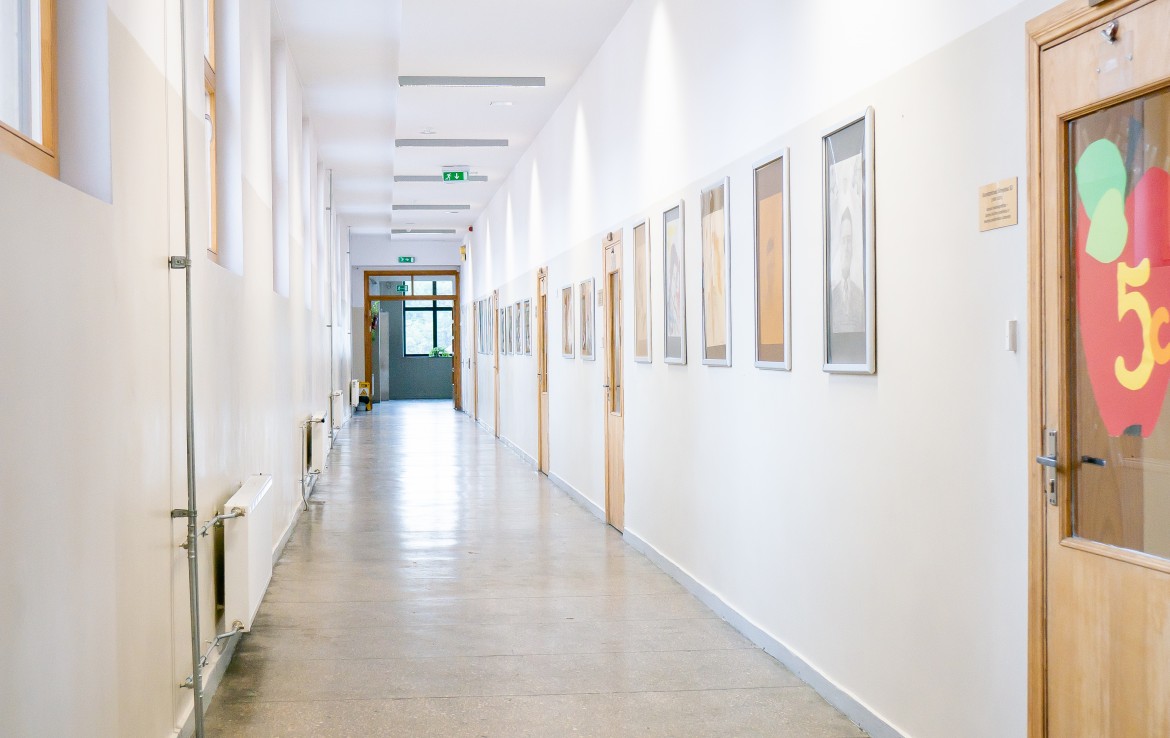 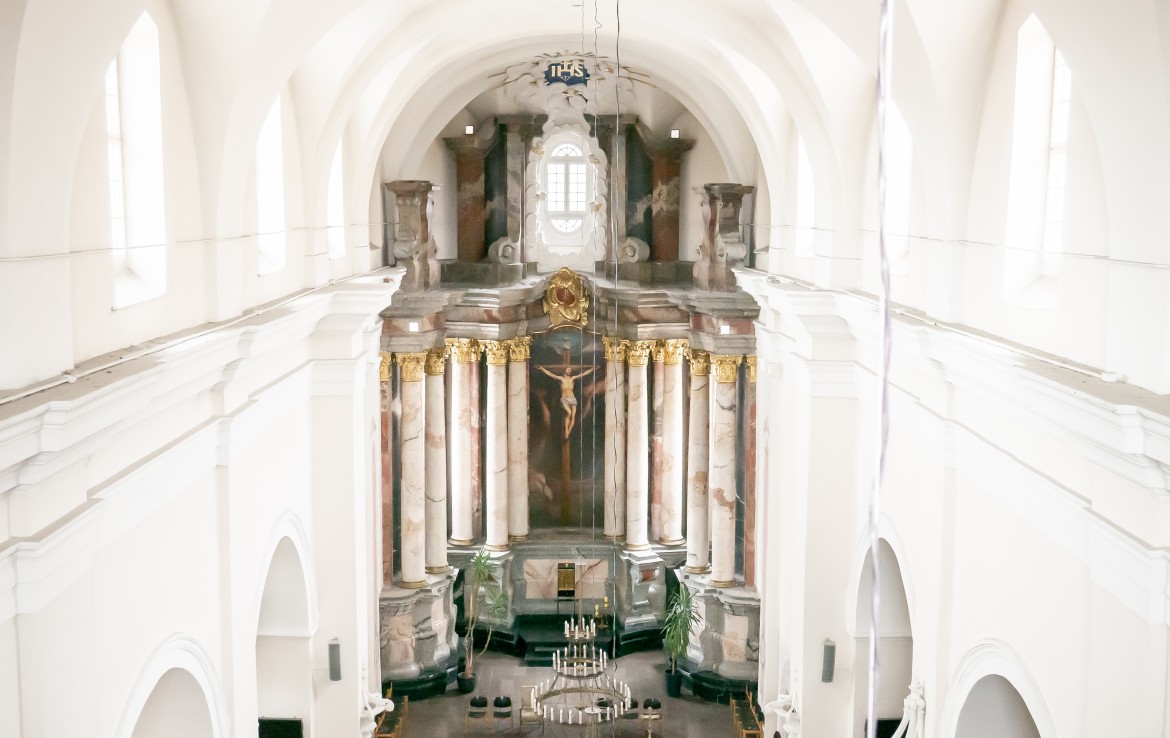 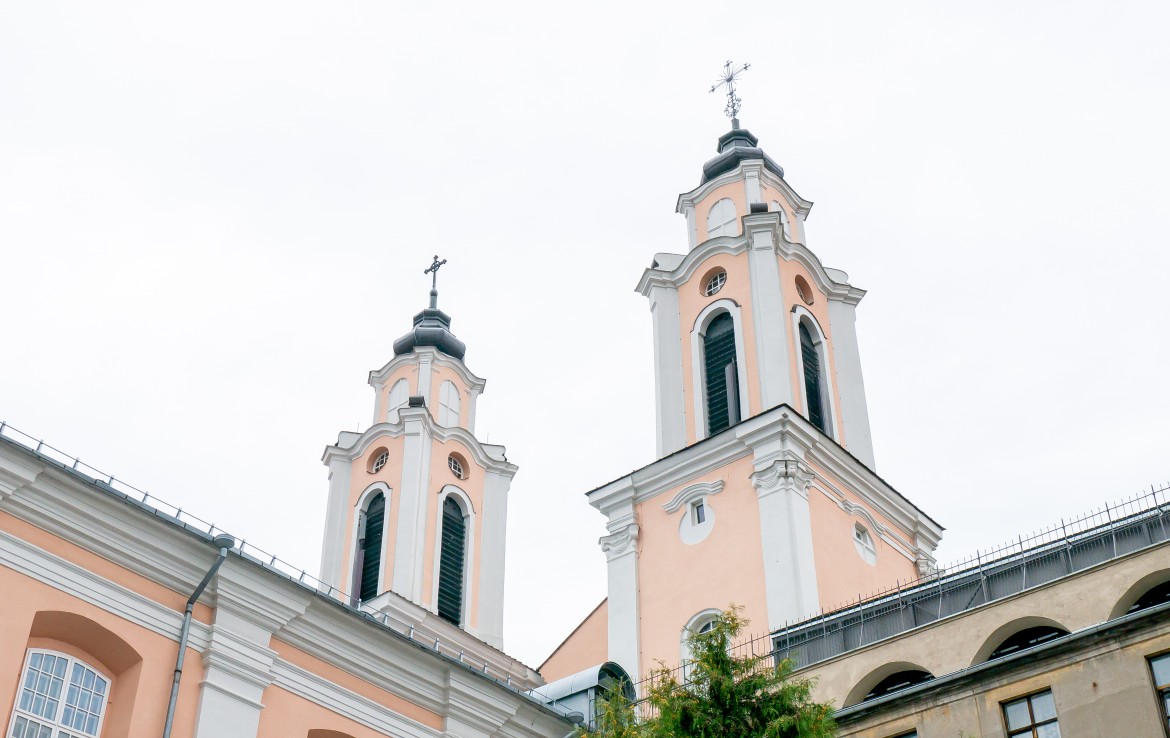 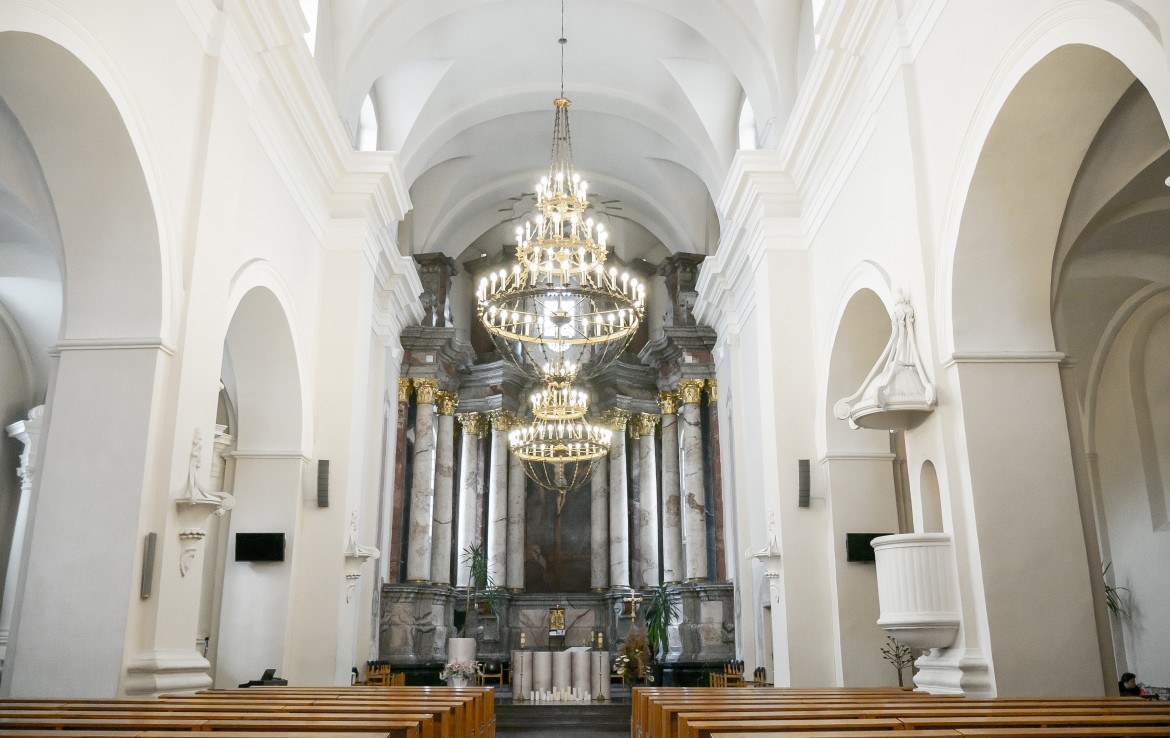 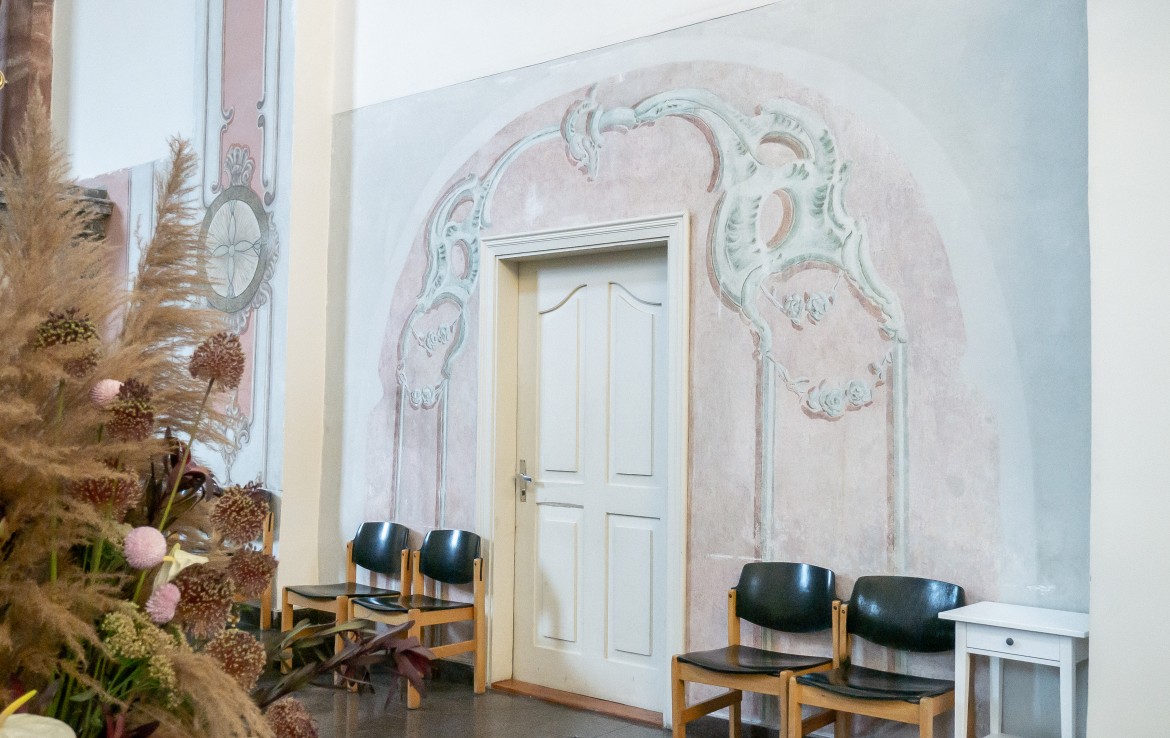 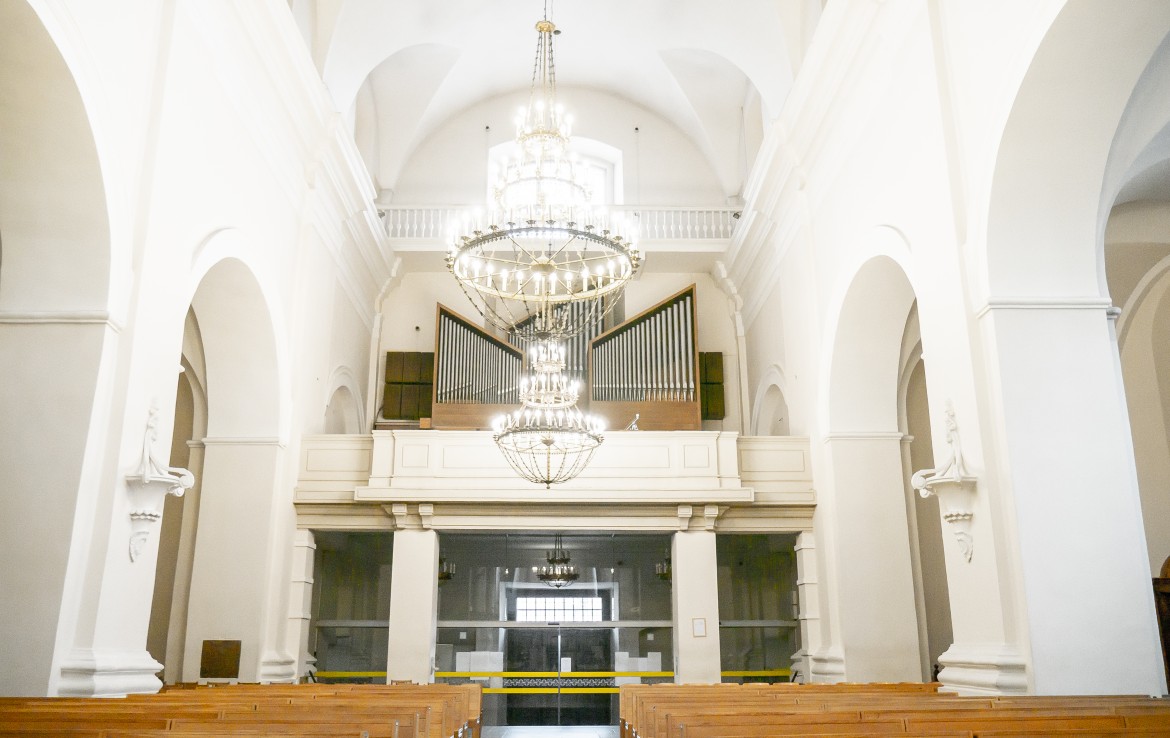 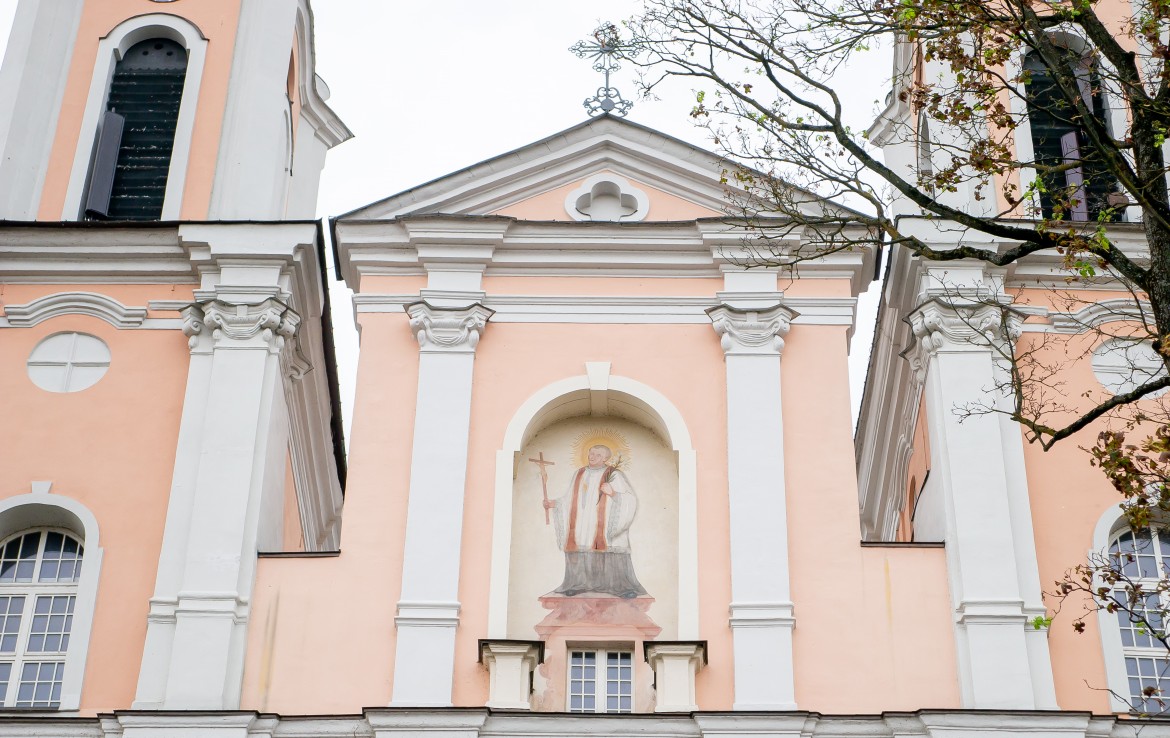 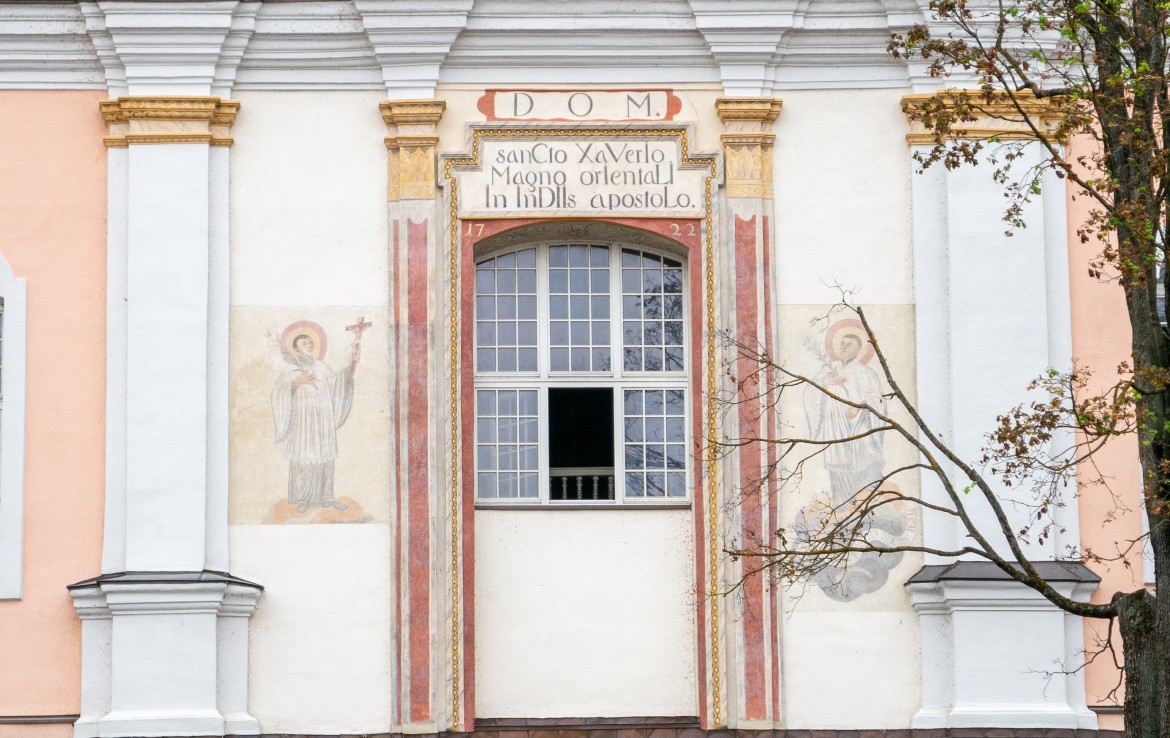 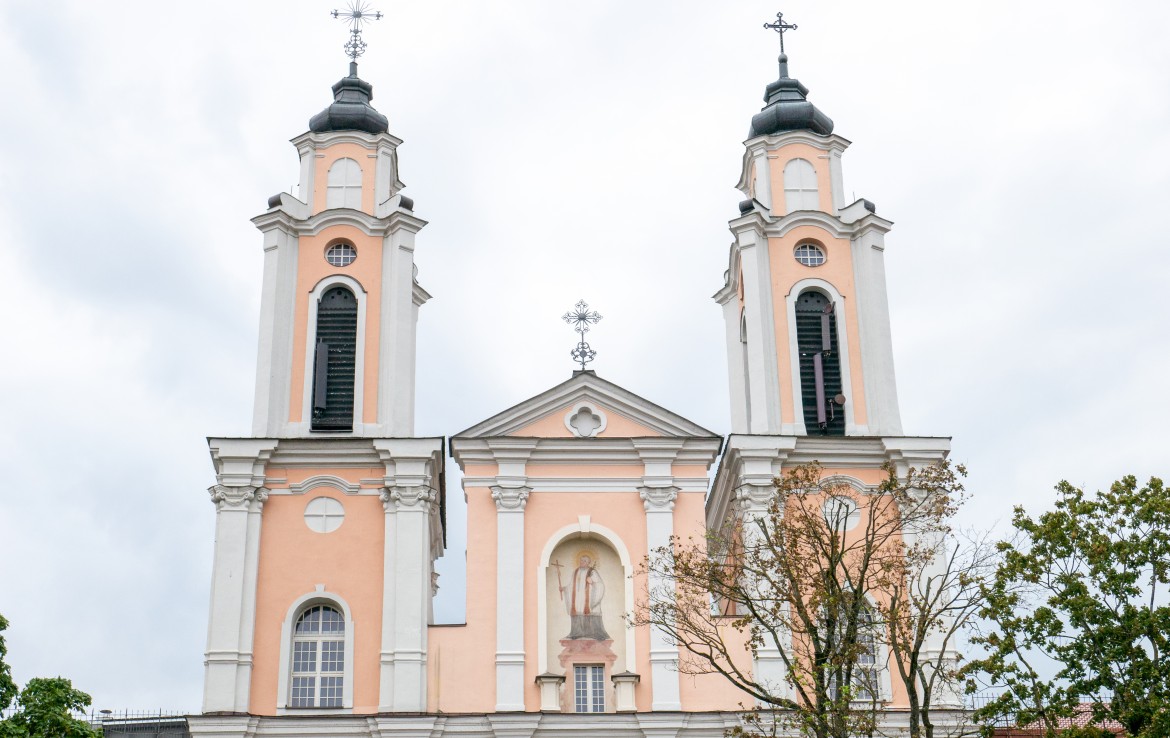 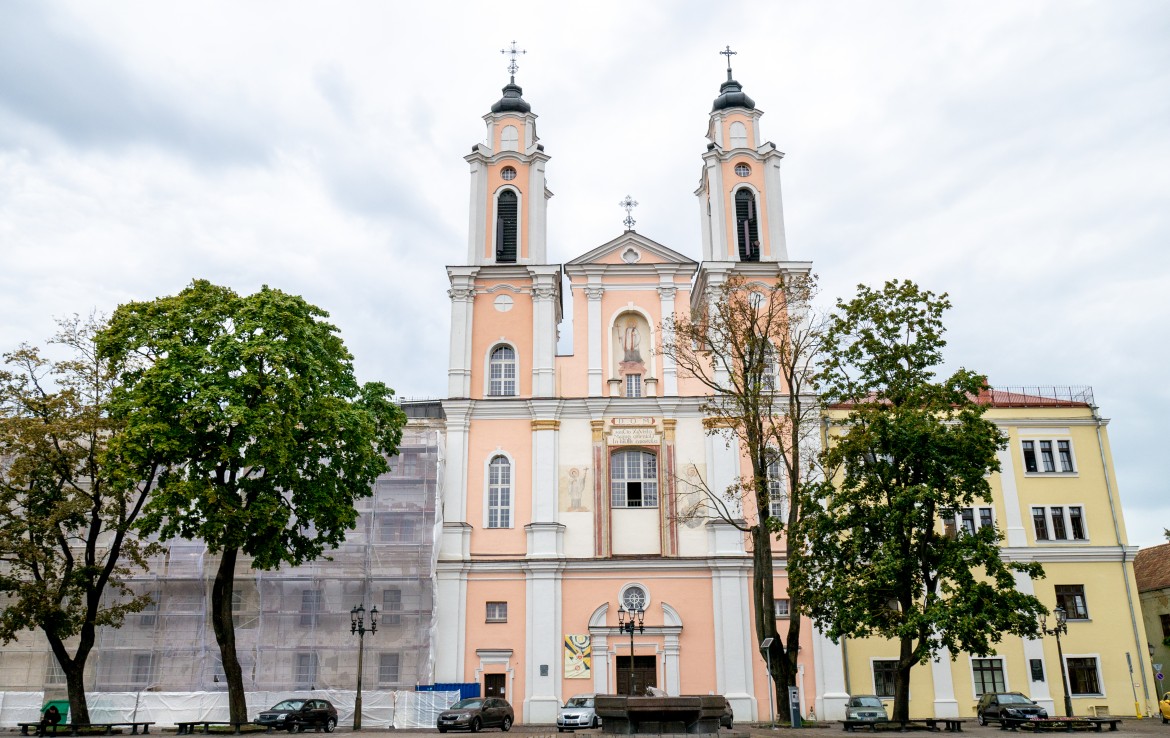 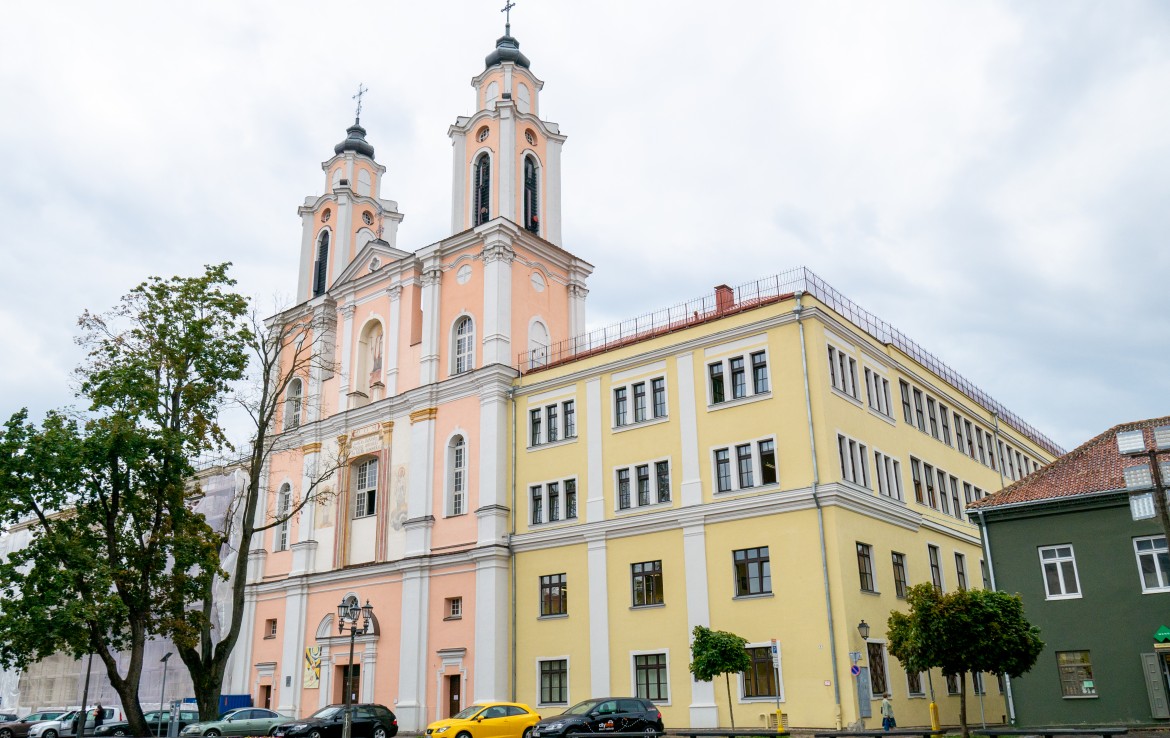 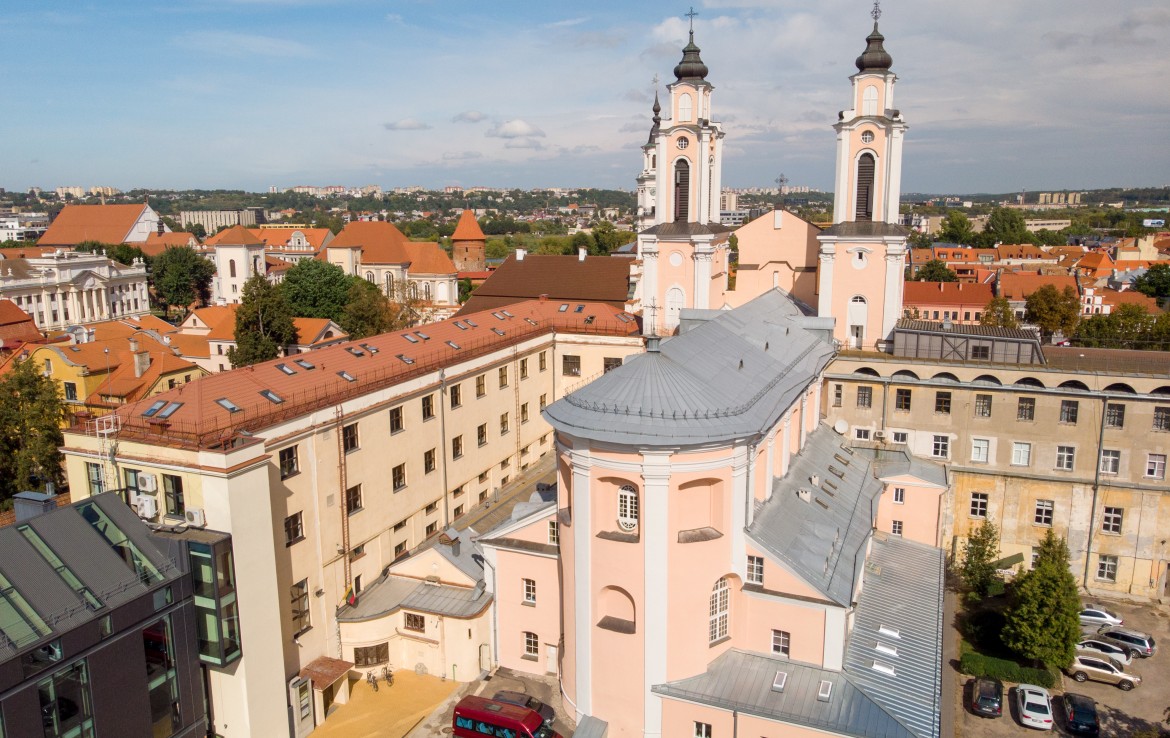 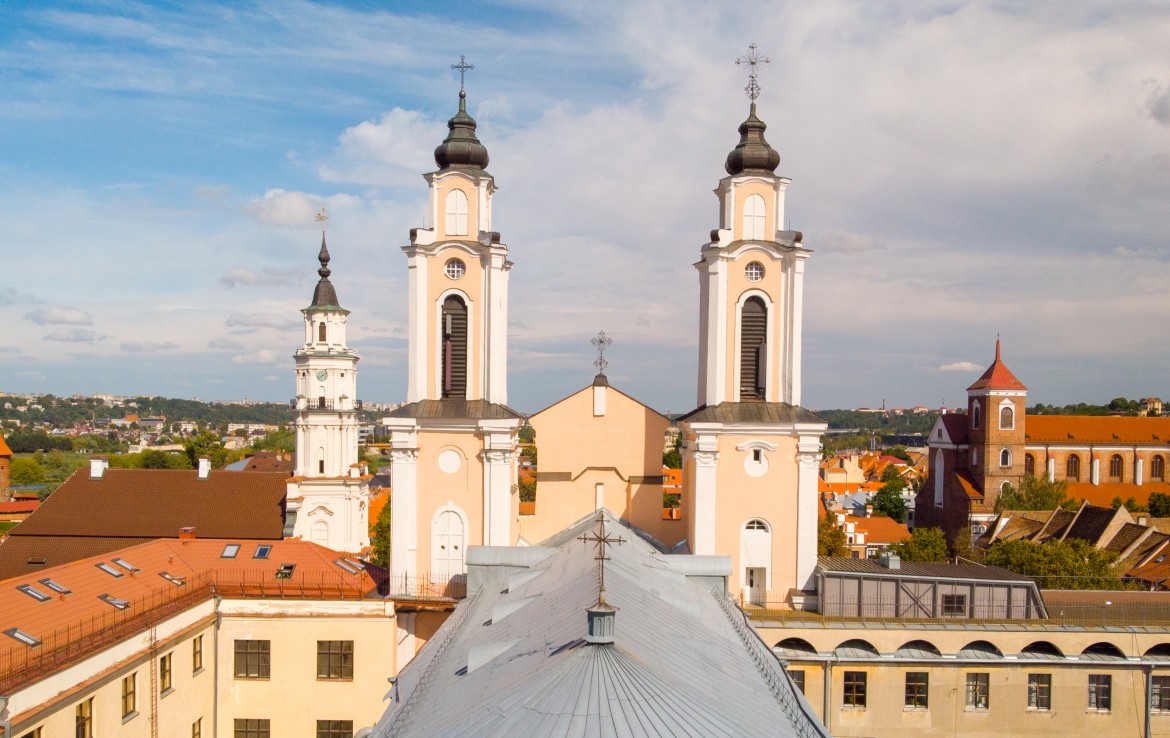 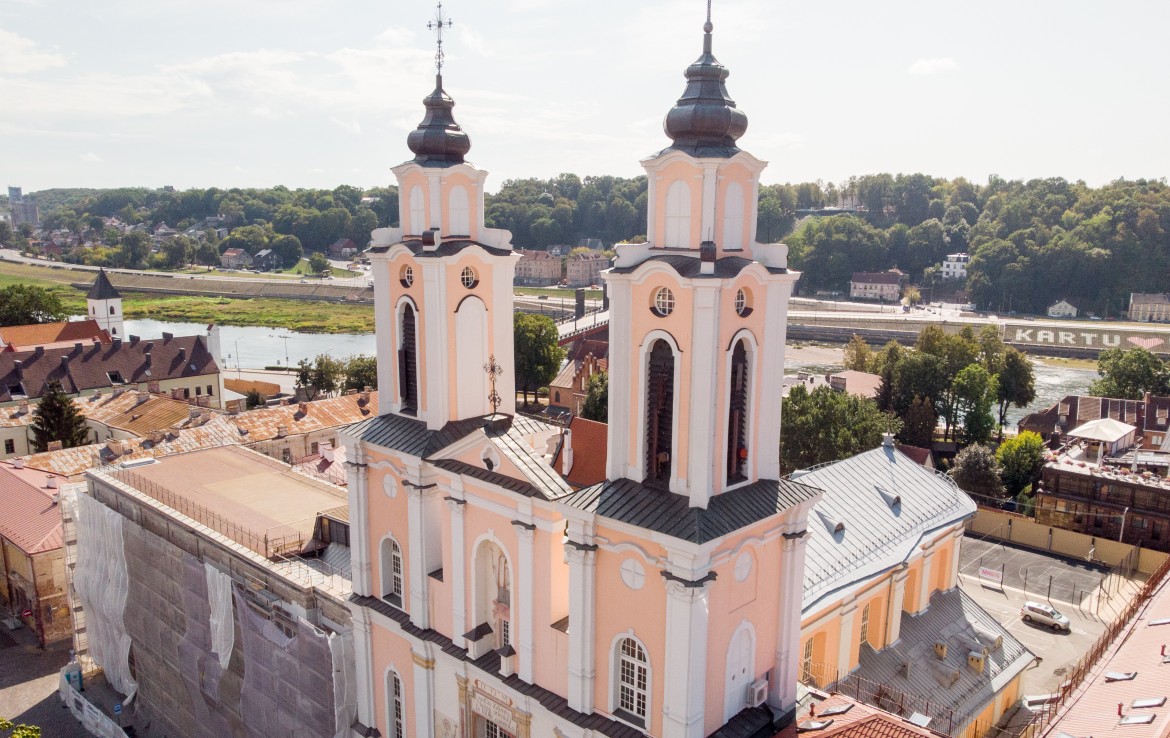 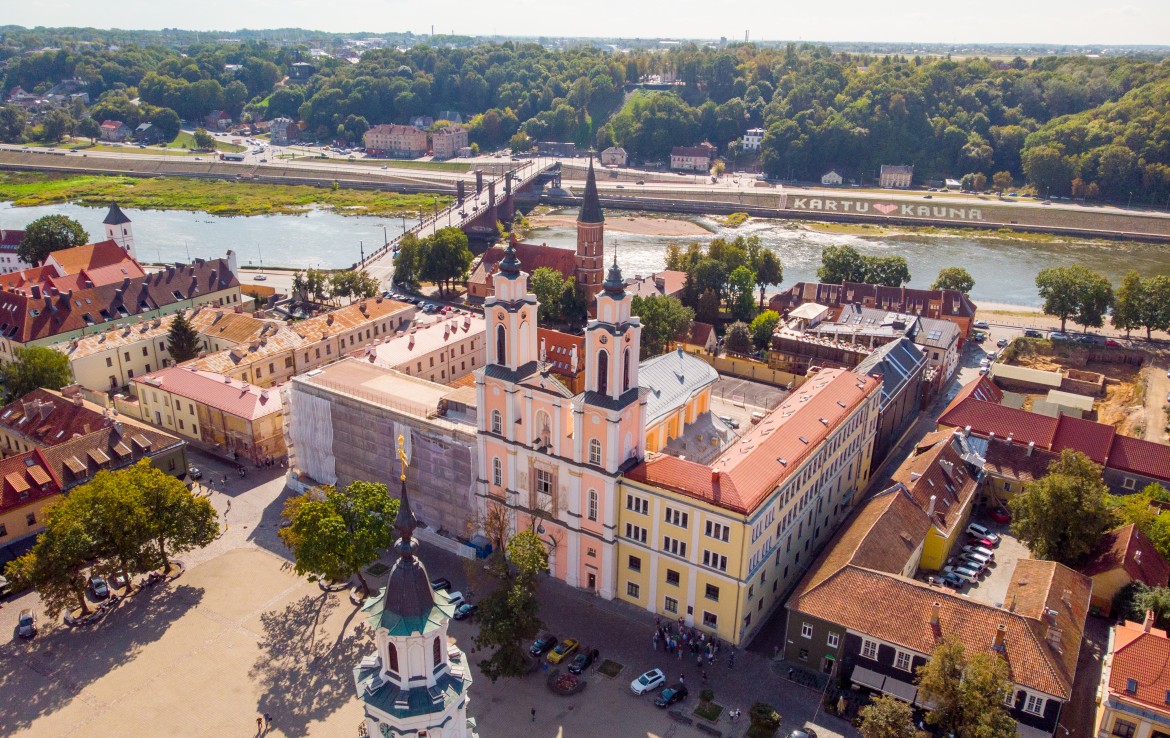 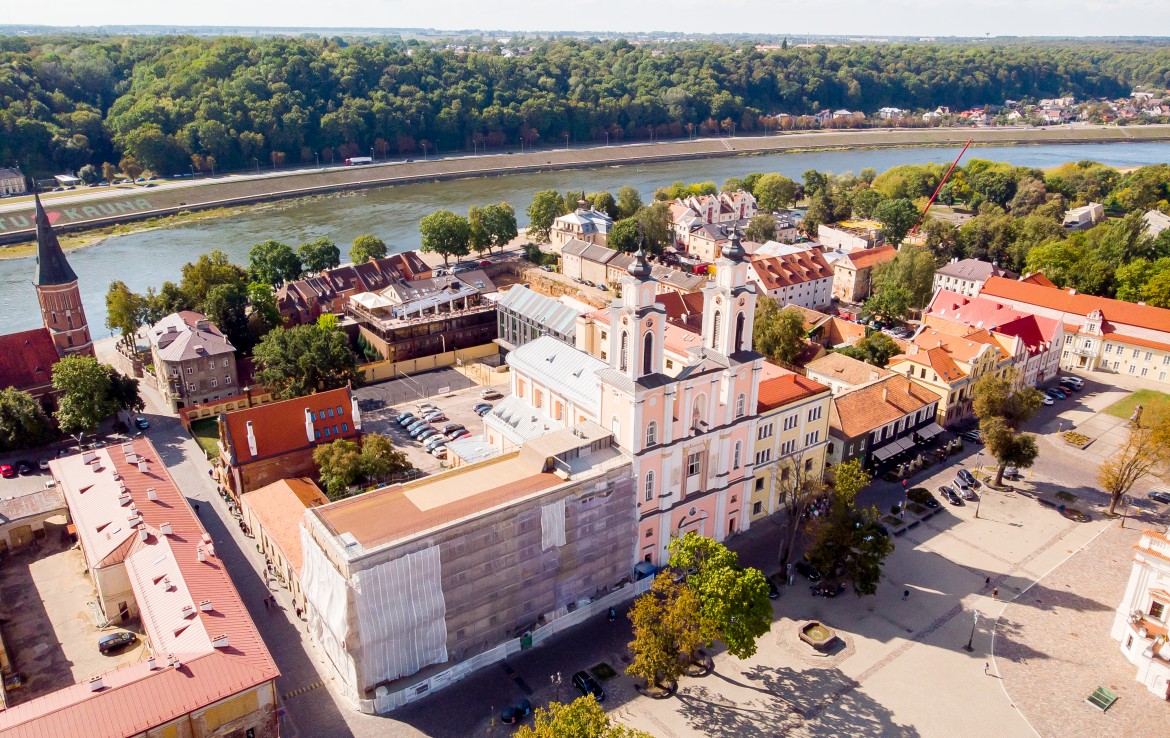