Complex of the Archcathedral Basilica, the Upper and Lower Castle Building, its Remains and Other Buildings

The country’s primary Catholic sanctum hides traces of many different time periods within its masonry walls. It is believed that the basement still hides the remains of the so-called Mindaugas’ Cathedral making it one of the oldest masonry structures in the country. The plaster layer and the floors of the Cathedral hide elements of Gothic, Renaissance, and Baroque. The Cathedral has suffered multiple damages resulting in major reconstructions throughout time. The Cathedral, as we see it today, was shaped in the 18th century when Laurynas Gucevičius, one of the most prominent representatives of the mature Classicism in the country, undertook supervision of reconstruction of the building, which was in a bad shape at that time. The reconstruction began in 1778, but completion of all changes took up to the beginning of the 19th century when neither the Duchy of Lithuania, nor the author of the project himself was around to see the ultimate outcome.

The massive portico with six columns of the Doric order, which added strict, pure classicistic shapes to the building, should probably be regarded as the most distinctive solution attributed to this reconstruction. This impression is enhanced by the decorative entablature and the iconic composition on the pediment tympanum depicting a scene from the story about Noah created by Tomas Righi. The side parts of the front façade depict Abraham and Moses with four evangelists featured in the niches inside the portico. Above them there are the relief compositions attributed to the same T. Righi. The area above the monumental and yet simple main portal, typical to Classicism, is decorated with images, the biggest one of them depicts St. Peter’s sermon. The top of the pediment is completed with the sculptures of St. Stanislaus, St. Kasimir, and St. Helena, i.e., the copies of the pieces by Karolis Jelskis restored in the end of the 20th century.

The building maintained the authentic structure of the indoor space inherited back from the era of the Gothic Vytautas Cathedral: the layout of the naves remained unchanged, however rows of chapels were built at the sides. The Architect treated St. Kasimir Chapel and the former Valavičius Family Chapel with respect: only minor changes were made on them and they were joined to the new volume. The sacristy was built at the back of the building, symmetrically to the first one, as a reflection of its shapes, it was covered with a vault matching the shapes. Two side projections added the front part of the building are slightly smaller than the rear ones, a part of them on both sides of the nave are taken by the oval-shaped chapels; the Architect also incorporated the former Valavičius Family Royal Chapel within the space of the northern projection.

The colonnades join the old St. Kasimir Chapel and the Sacristy to the front projections with the side entrances installed behind them by L. Gucevičius. There we can see groups of six sculptures arranged along the side façades under window rows on both sides: on the side of the Square we may see the Dukes of Lithuania, while the northern side depicts the saints. Even though the sanctum remained of a hall-type, the side parts of the sanctum built by L. Gucevičius causes the impression of a basilica-type layout of the sanctum when looking from the outside. It is interesting enough that the side parts are covered with an almost flat roof.

The monumental, bright interior of the sanctum shows the work put into it by L. Gucevičius in refining the classic forms of architecture. At the end of the wide central nave we can see an imitation of the Classicist portico shapes, a certain retrotabulum reflecting the main façade of the sanctum and highlighting the main altar. The chapels may be accessed from the side naves covered with groin vaults through the formed portals visually similar to the solutions applied to the main entrance. It is interesting to compare one of the first Baroque structures in the country found inside, i.e., St. Kasimir Chapel, to the Sacristy of the sanctum, which is similar in size and built as an implementation of L. Stuoka’s idea. 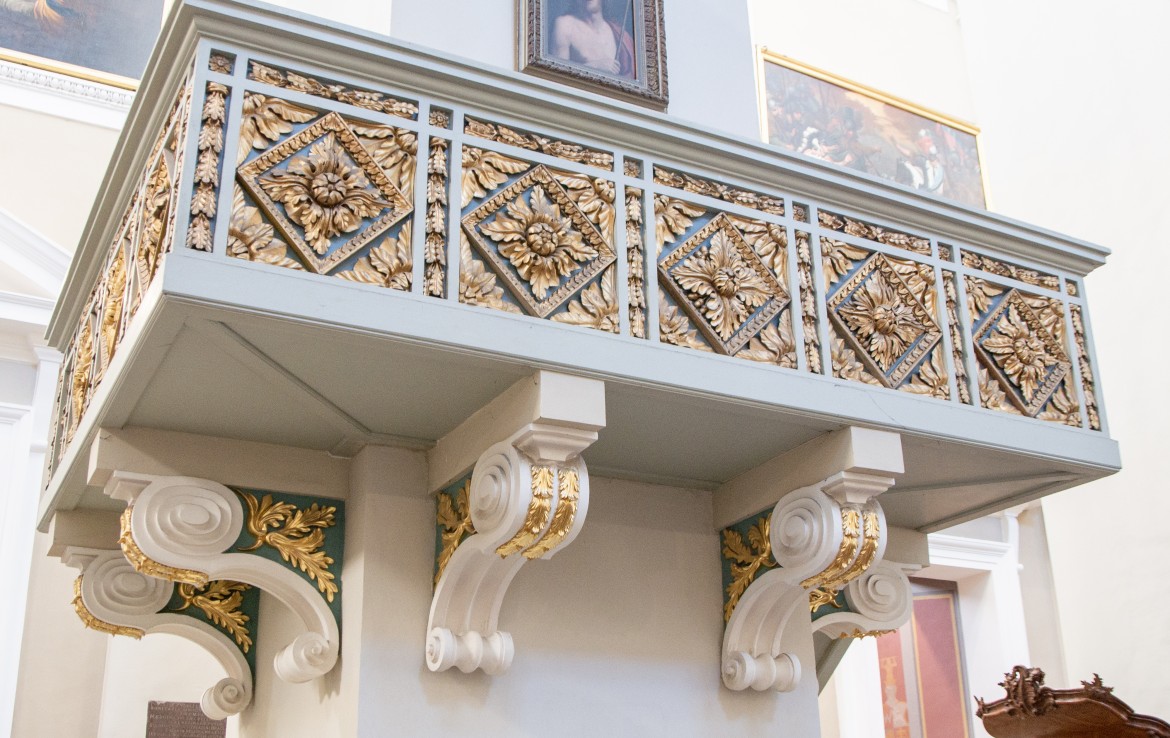 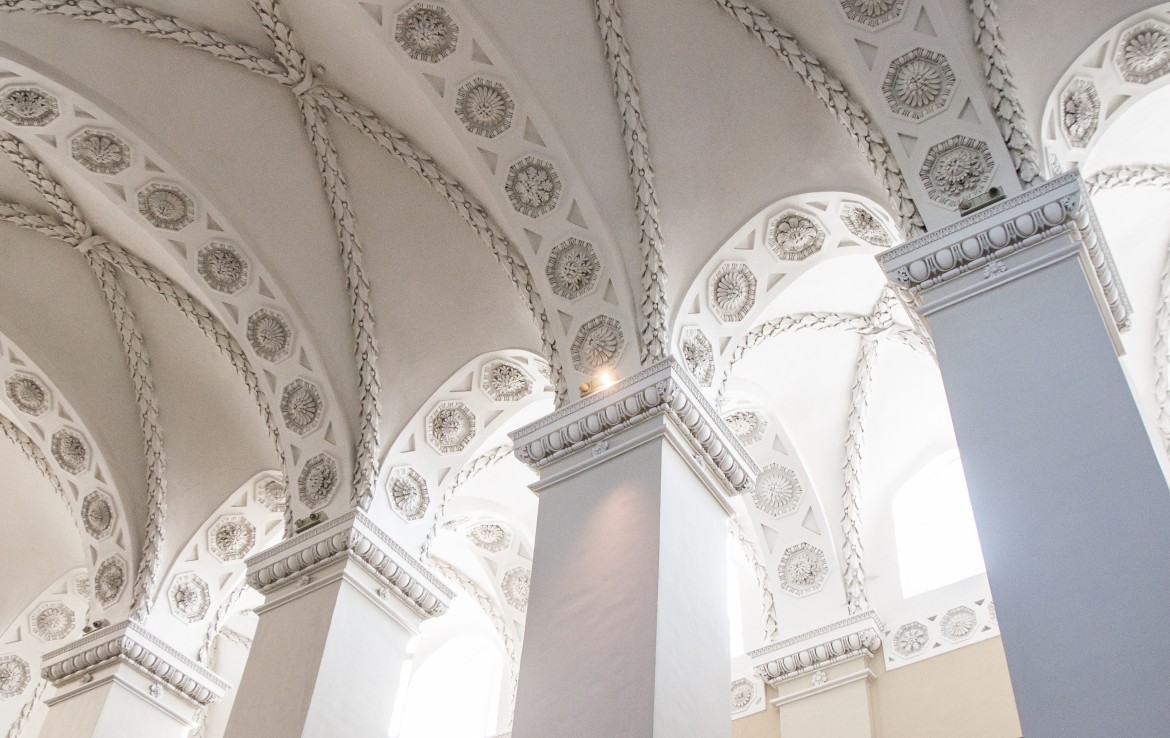 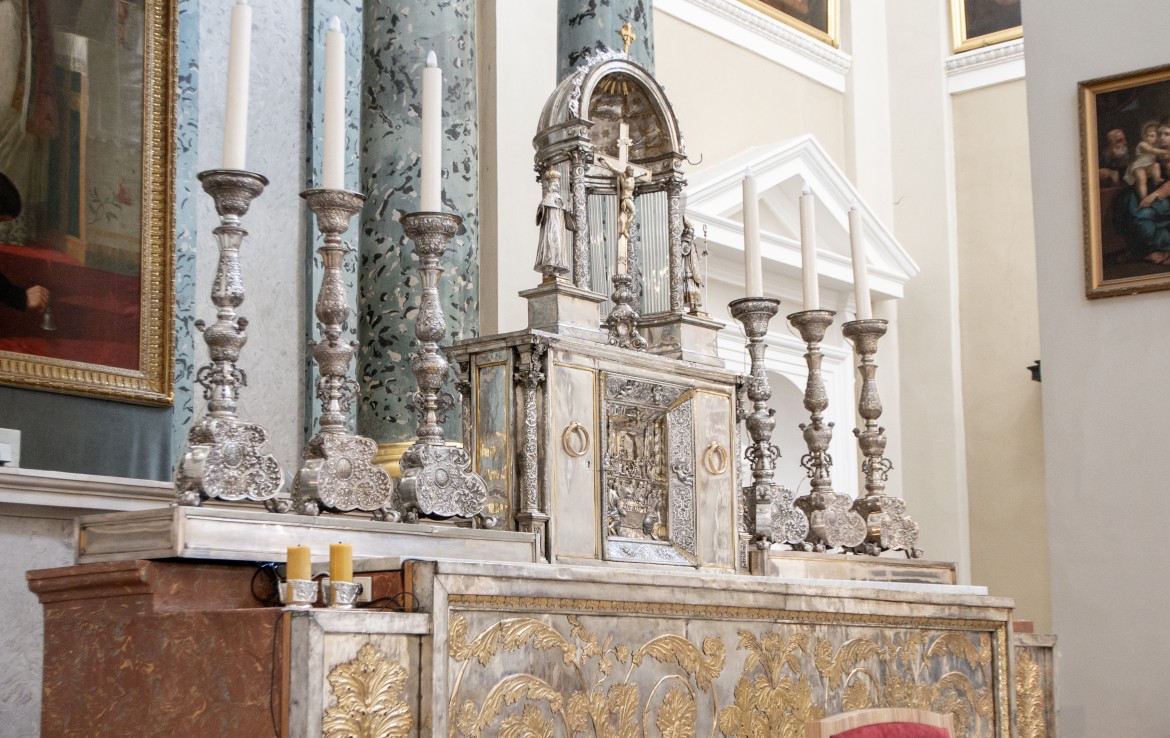 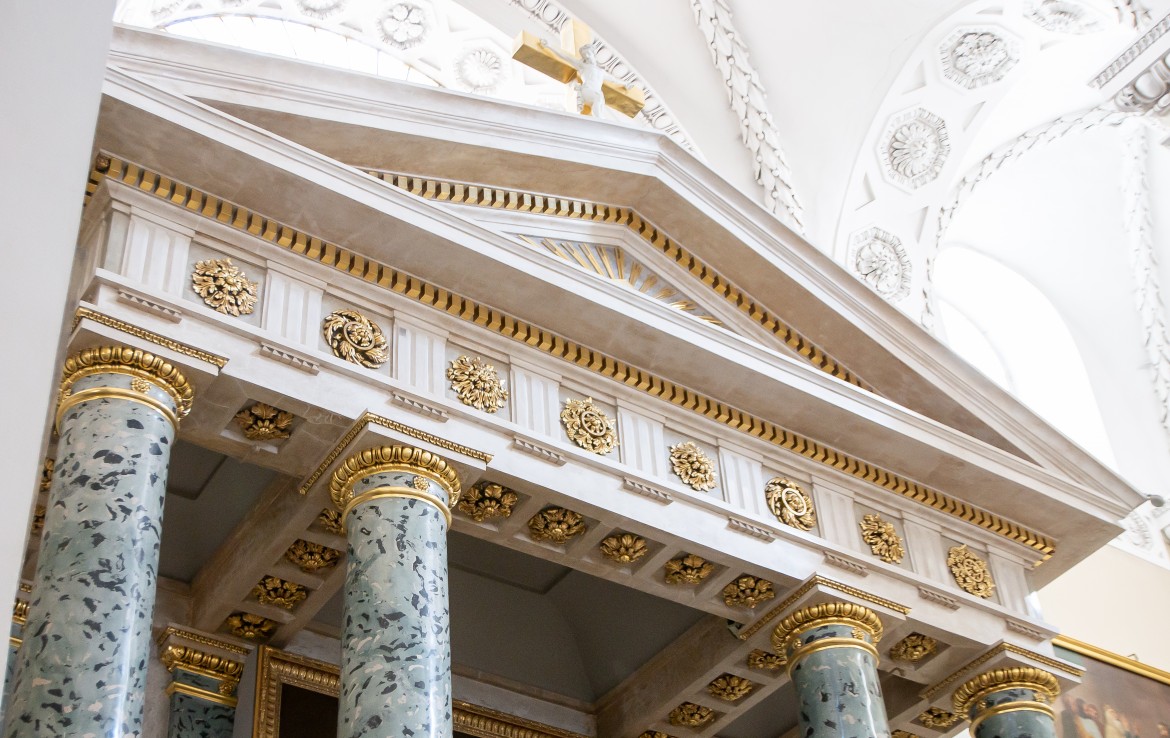 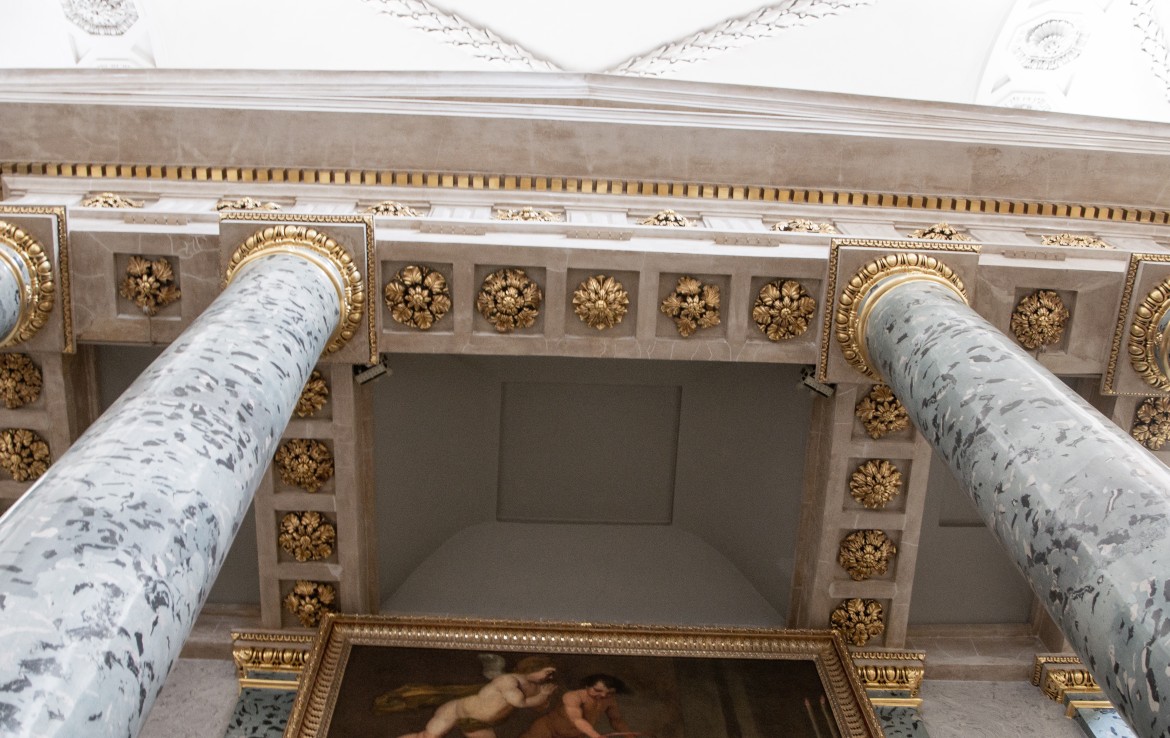 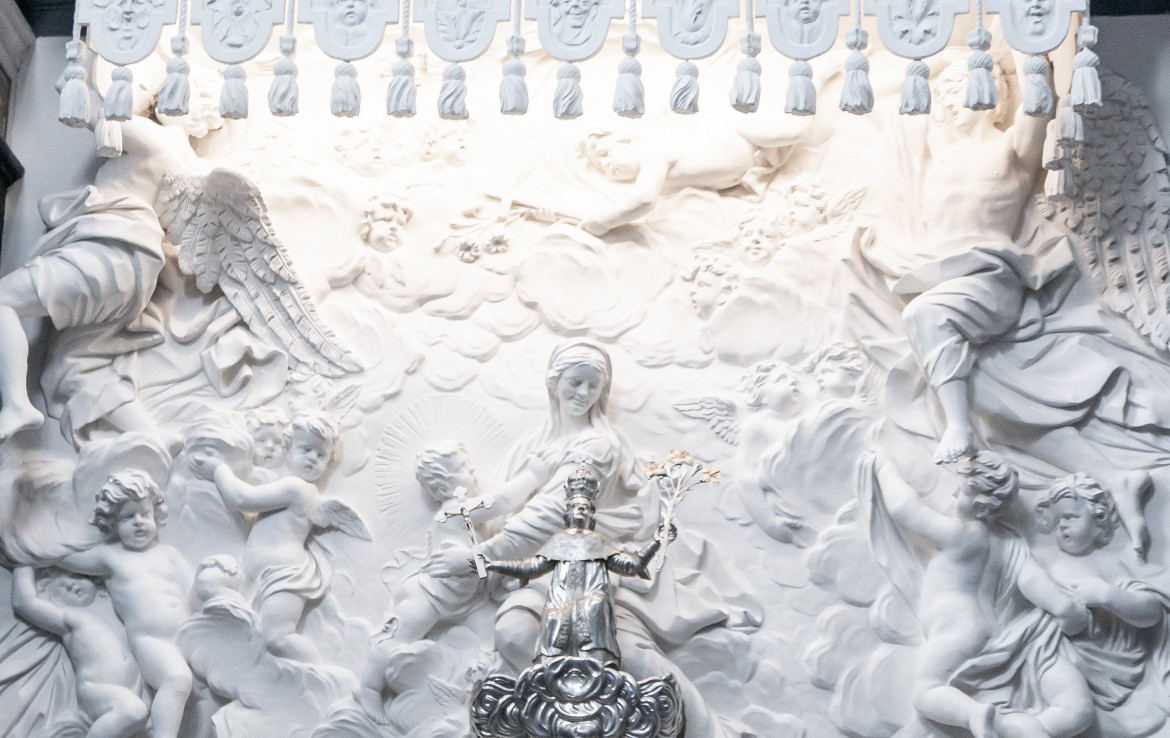 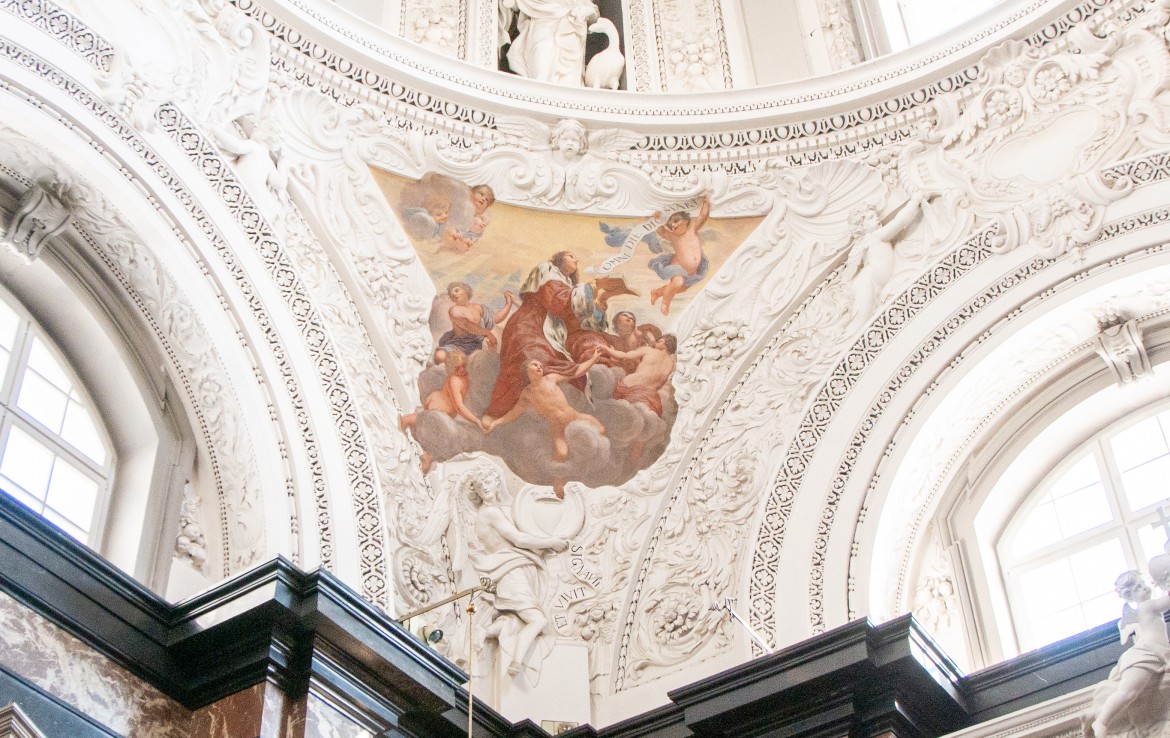 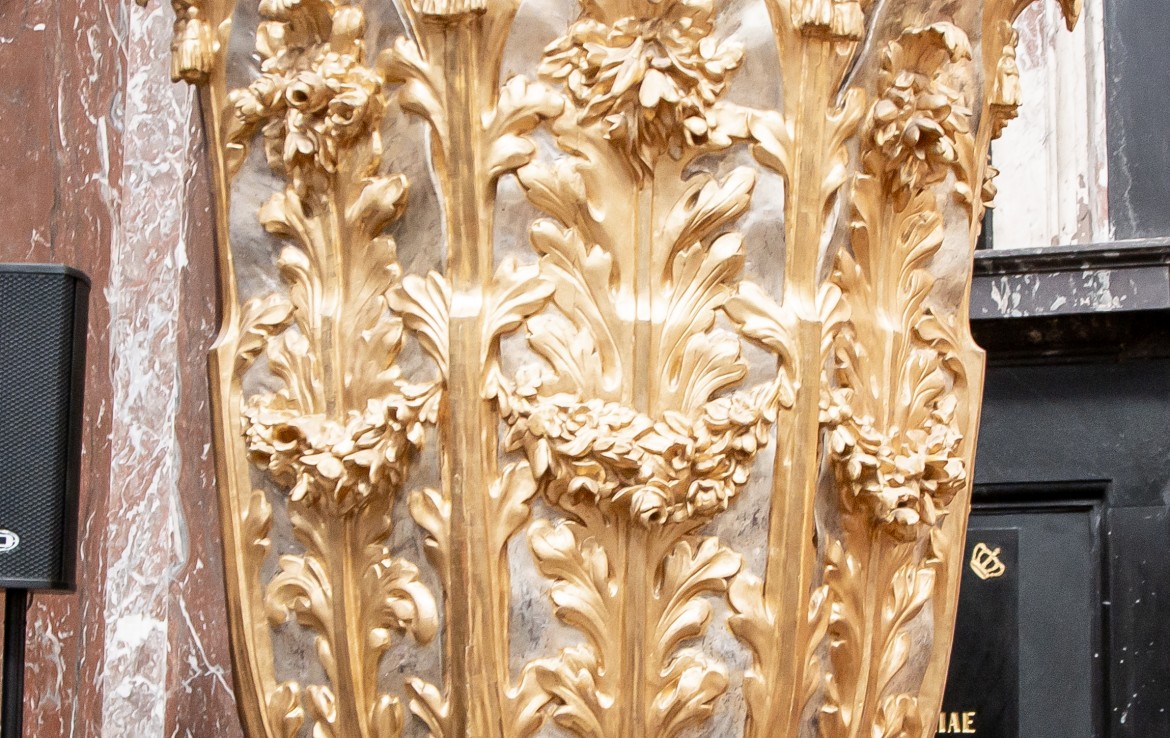 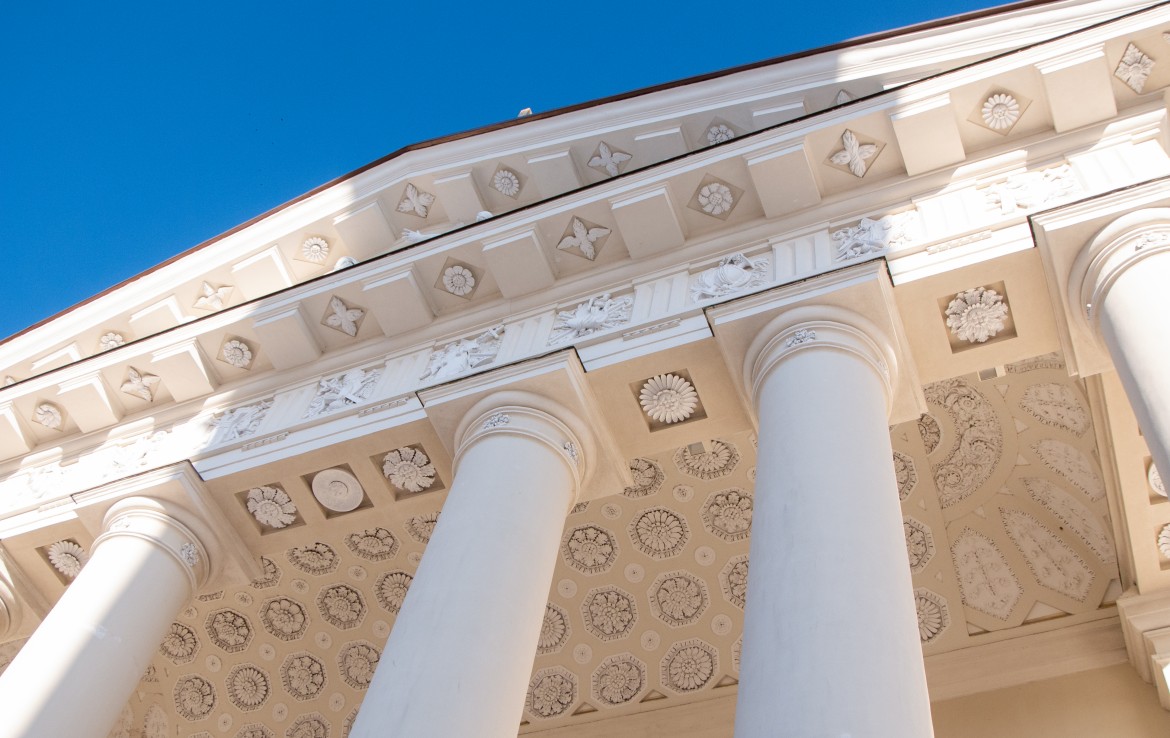 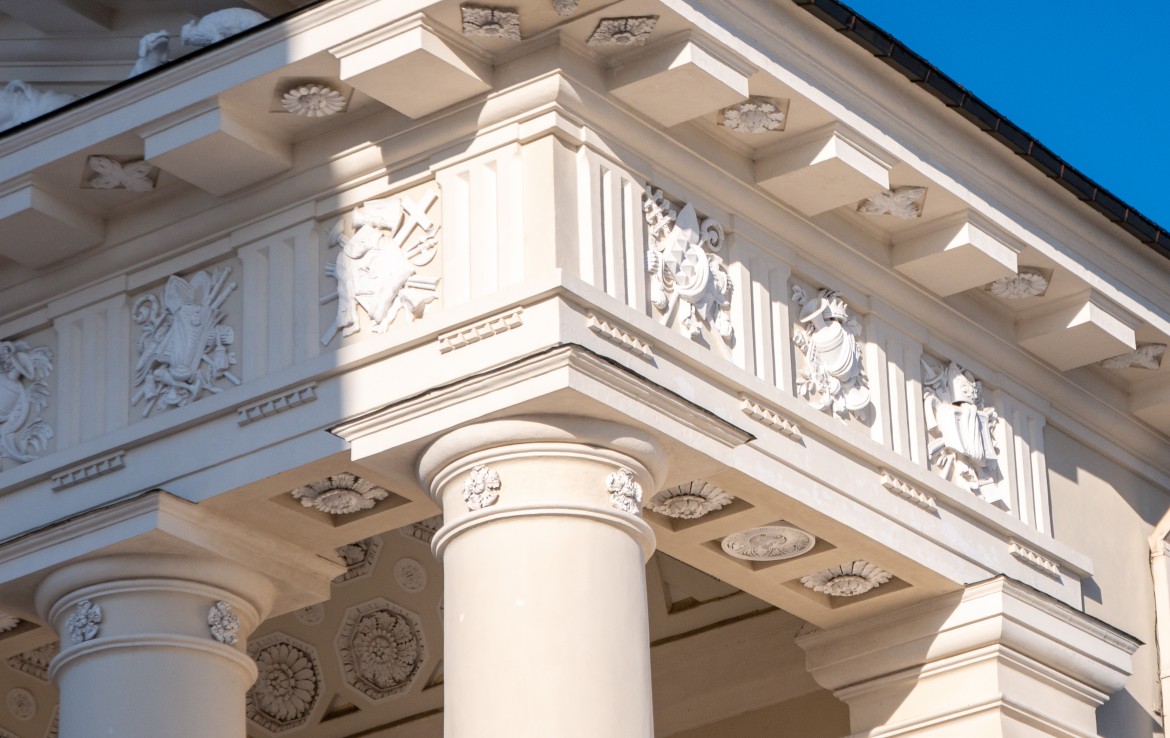 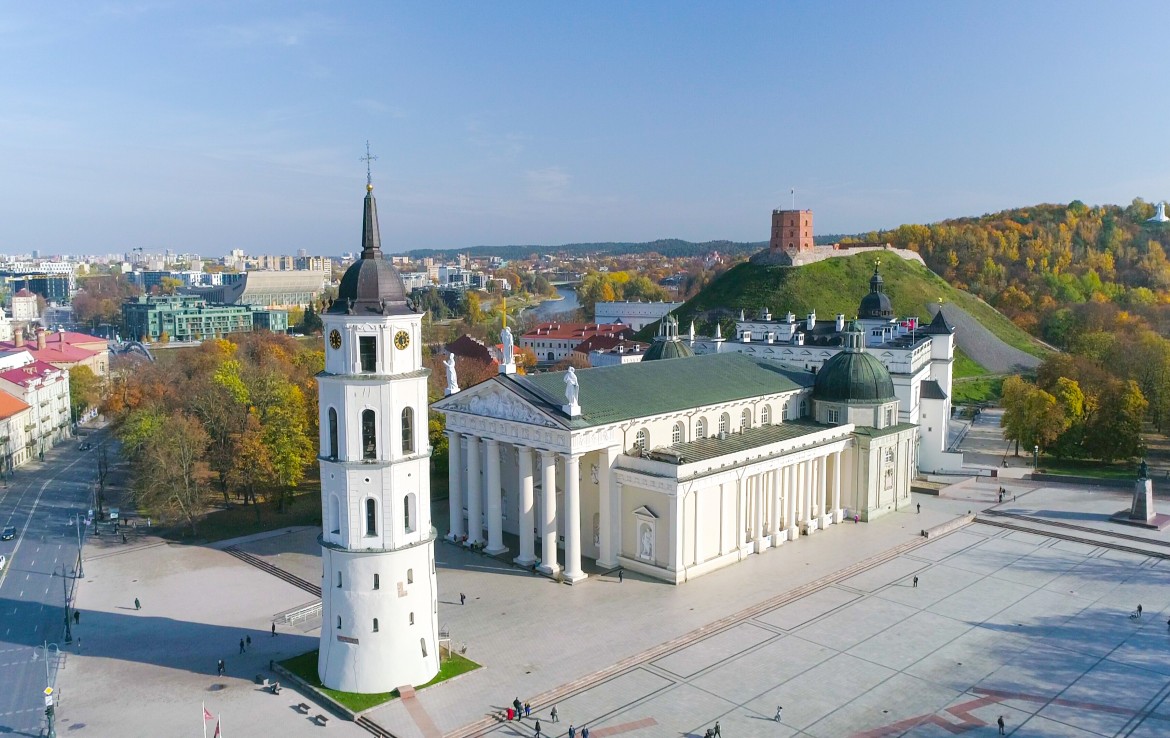 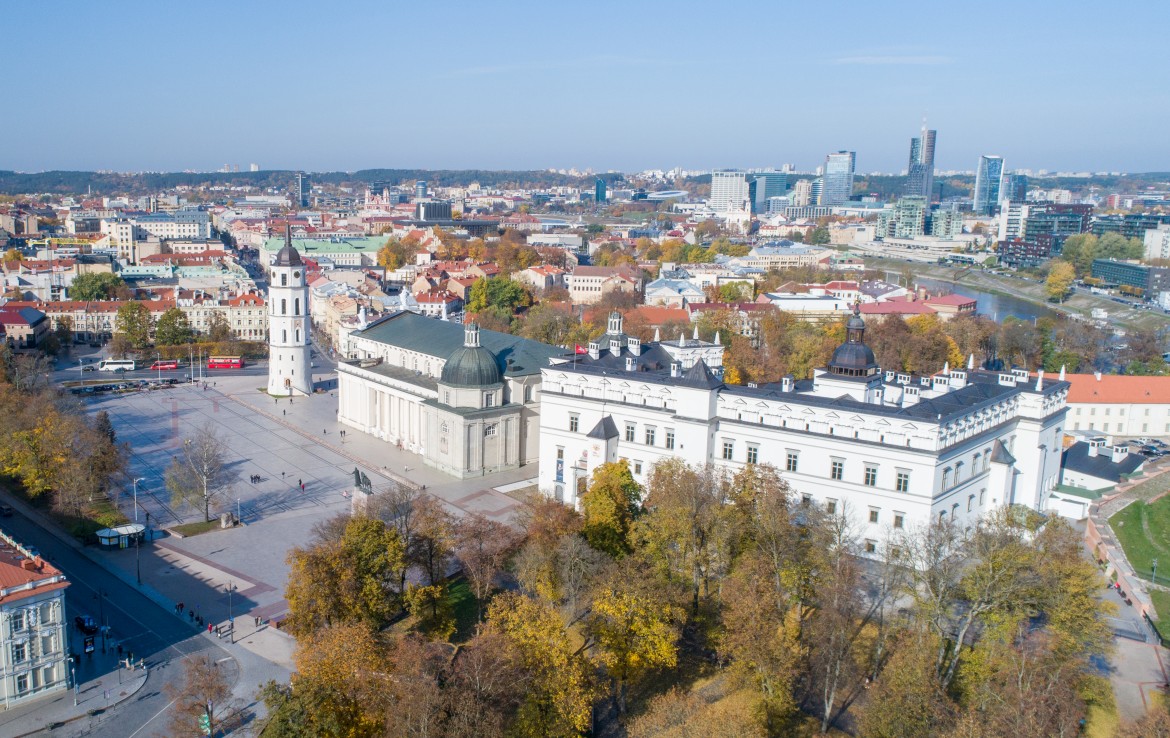 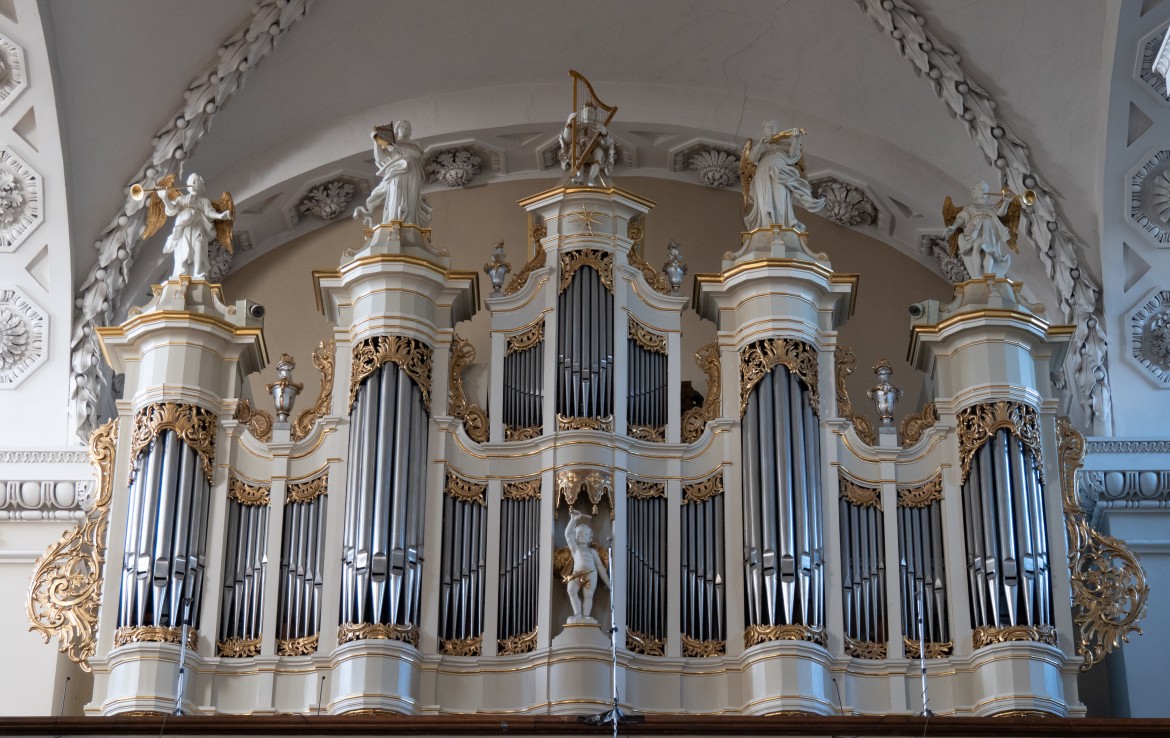 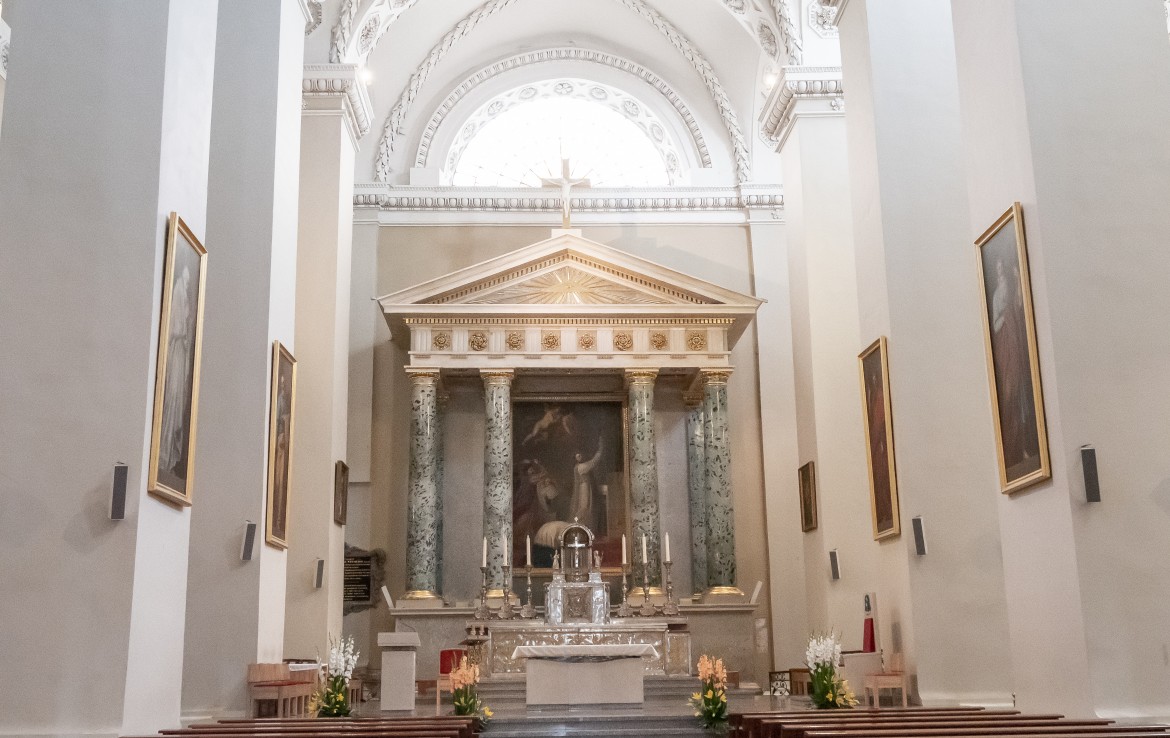 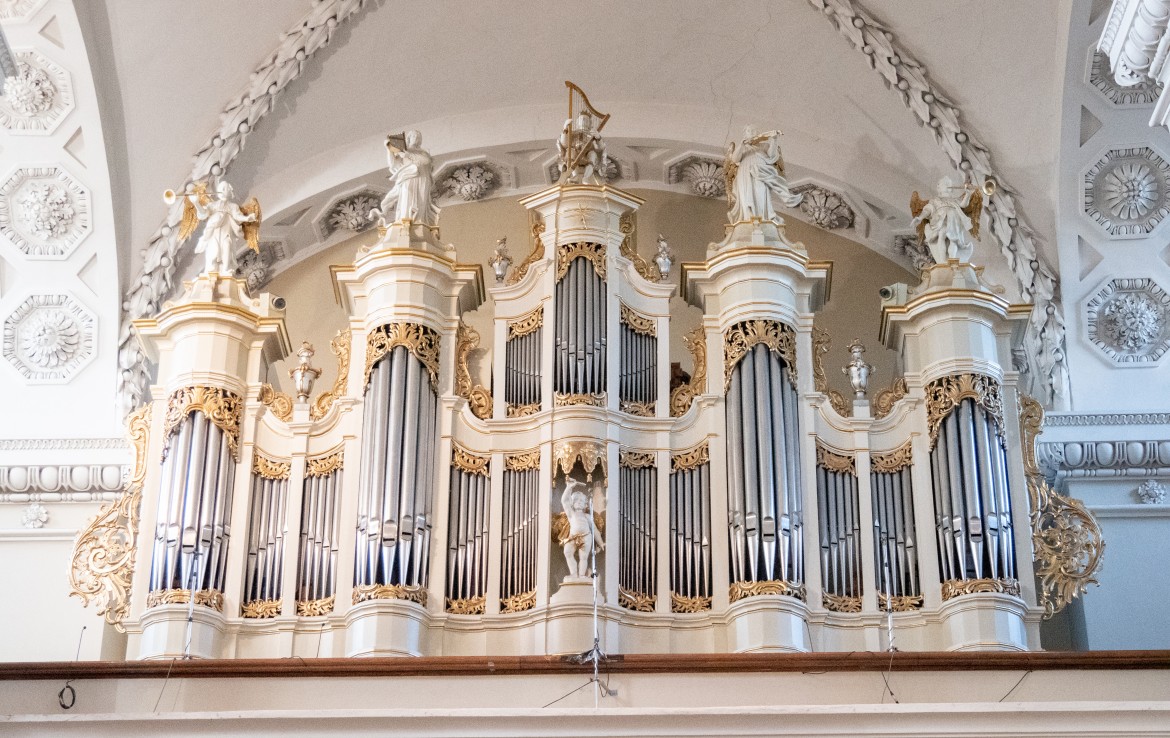 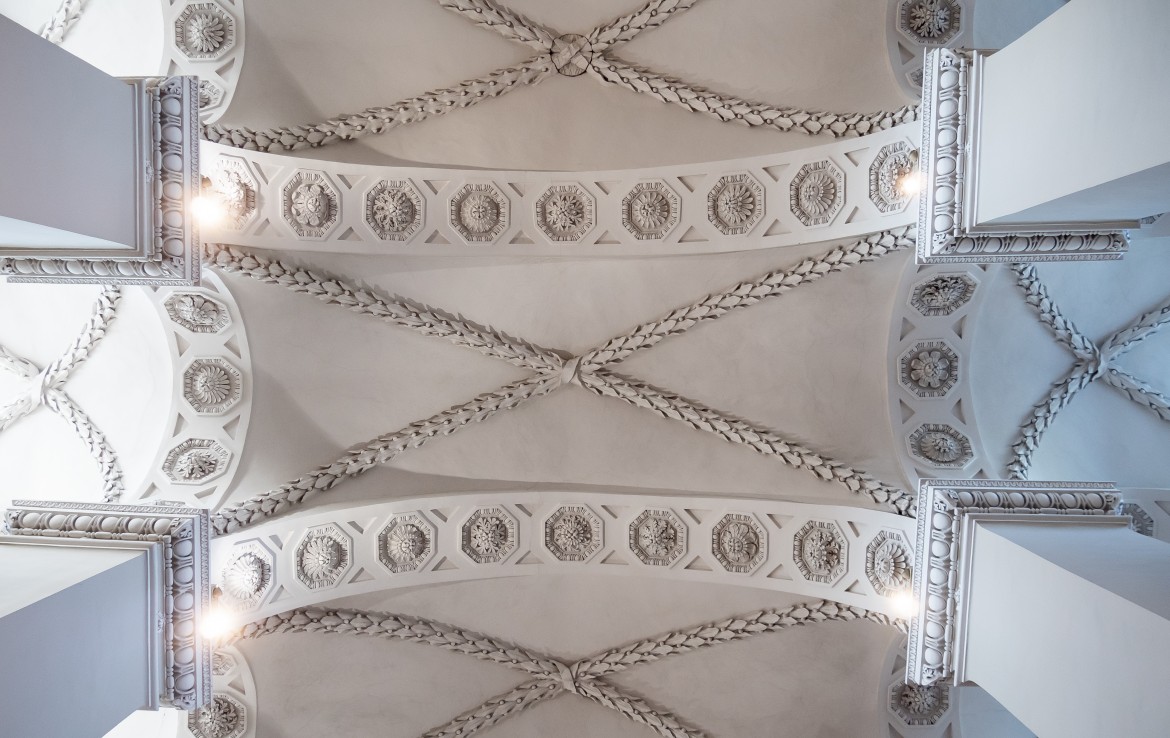 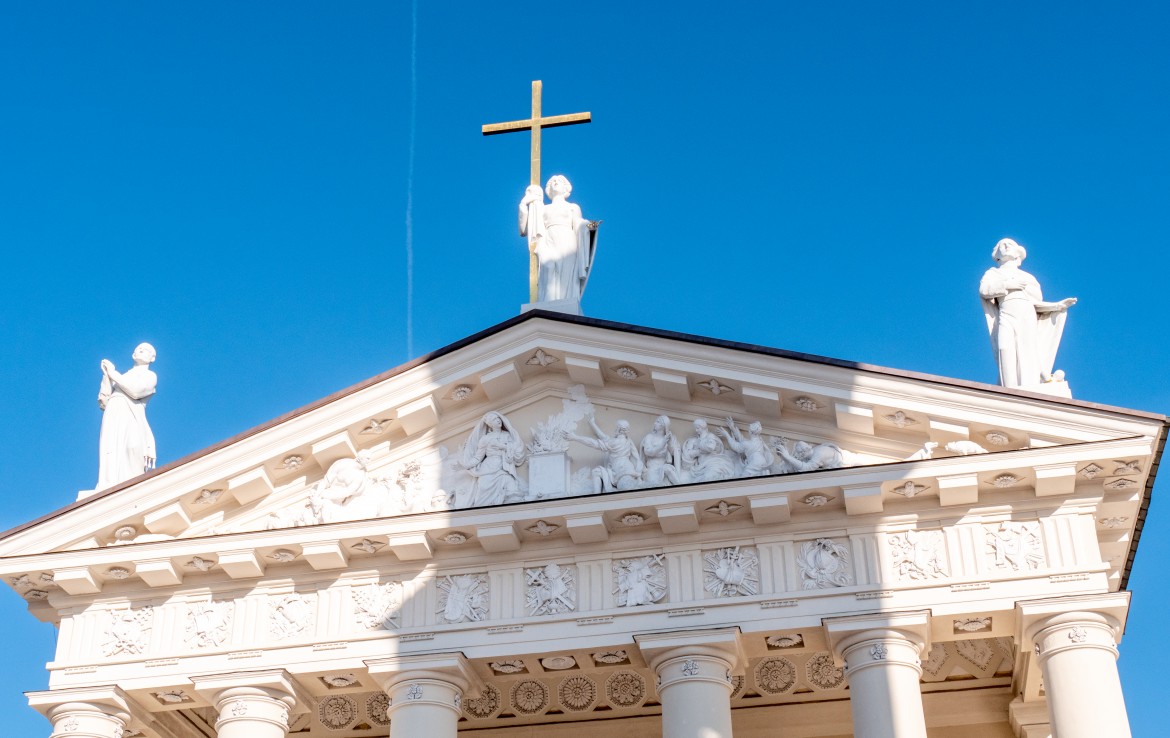 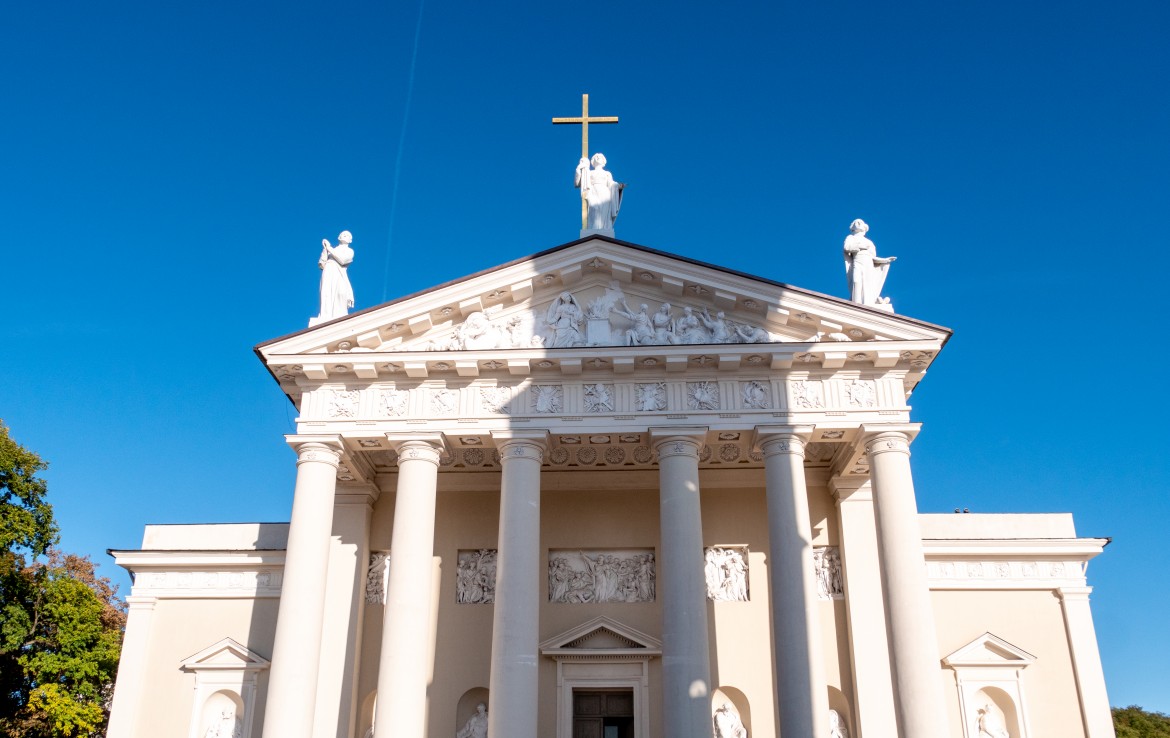 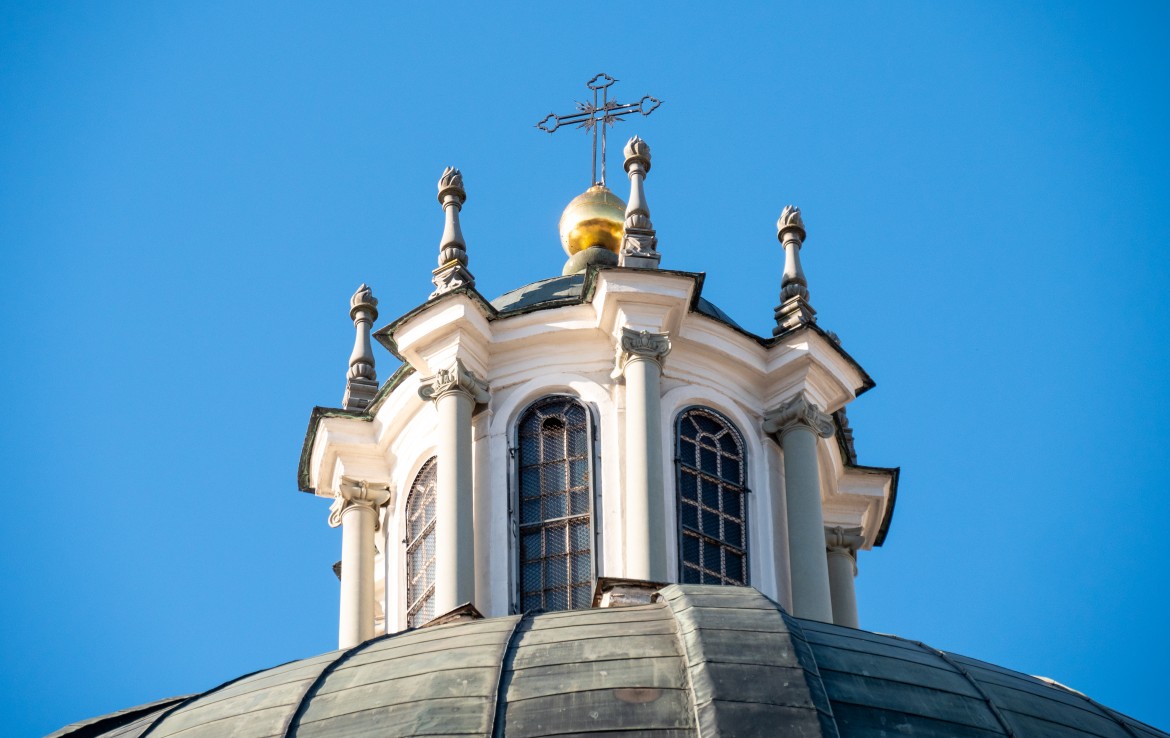 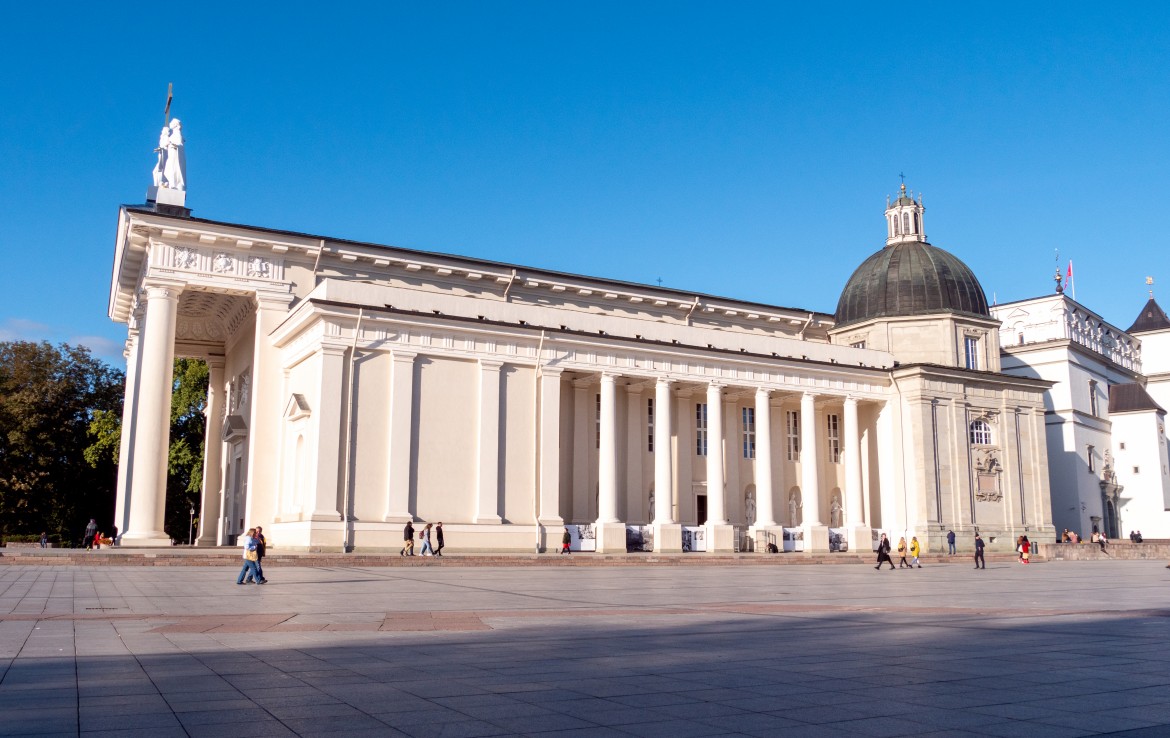