At the end of the nineteenth century, after the tsar’s prohibition to establish new catholic sanctuaries was abolished in 1897, a lot of churches were started to be built in the territory of Lithuania. Sacral buildings mushroomed in towns and cities one after another.  A retrospective style of historicism that prevailed then was reflected there adapting to churches neo-gothic and neo-Romanic forms based on medieval architecture. The architect Vaclovas Michnevičius is considered to be one of the most productive creators of this phenomenon who in 1909 produced the project of Žiežmariai Church, which reflected the neo-gothic trend.

The first church appeared in Žiežmariai as far back as the first half of the 16th century. It was torn down a hundred years later. Then a wooden house of worship was built there, which at the beginning of the 20th century no longer was able to meet the needs of the parish. It took a long time to complete the construction of the church, which was started to be built in 1913 for the money  donated by the believers. After the First World War the construction work on the church was carried out in already independent Lithuania. In 1924, before the great holidays, the church that was not fully equipped yet was consecrated and in 1929 one of its towers was completed.

According to the initial design of the architect, the church had to have two towers; however, due to the complicated historical events the second tower was never completed, thus the Church has an unusual, asymmetric shape. Most probably, on account of economic considerations the original project of the sanctuary was greatly simplified, as a result of which the appearance of the main façade changed considerately: it had to be more embellished and the tower around the spire had to be crowned with the pinnacles, which the architect liked to use in his work. Nonetheless, the simplified variant of the Church retained a part of the architect’s initial ideas. Among them was the accentuated rosette window above the main portal and perhaps the main element characteristic of Vaclovas Michevičius’ neo-gothic churches – the stepped pediment embedded between the towers.

The side facades are vertically divided by the rhythm of two-stair abutments and the lancets. The Church has three naves, it is of basilica type: stepped pediments are also built in the facades of the transept of the sanctuary having the Latin cross plan. Annexes of the sacristy formed of two-storied and one-storied volumes are blocked on both sides around the presbytery; the apse is three-walled. Wooden altars are matched to the neo-gothic architectural entirety of the Church. 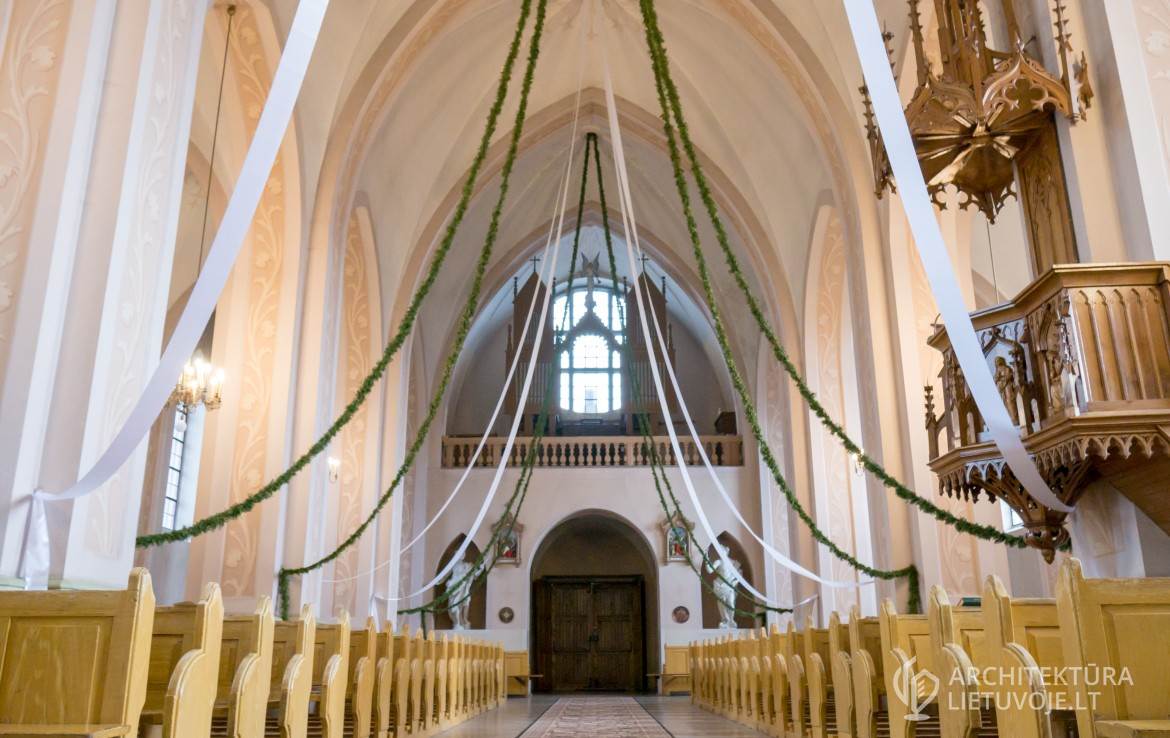 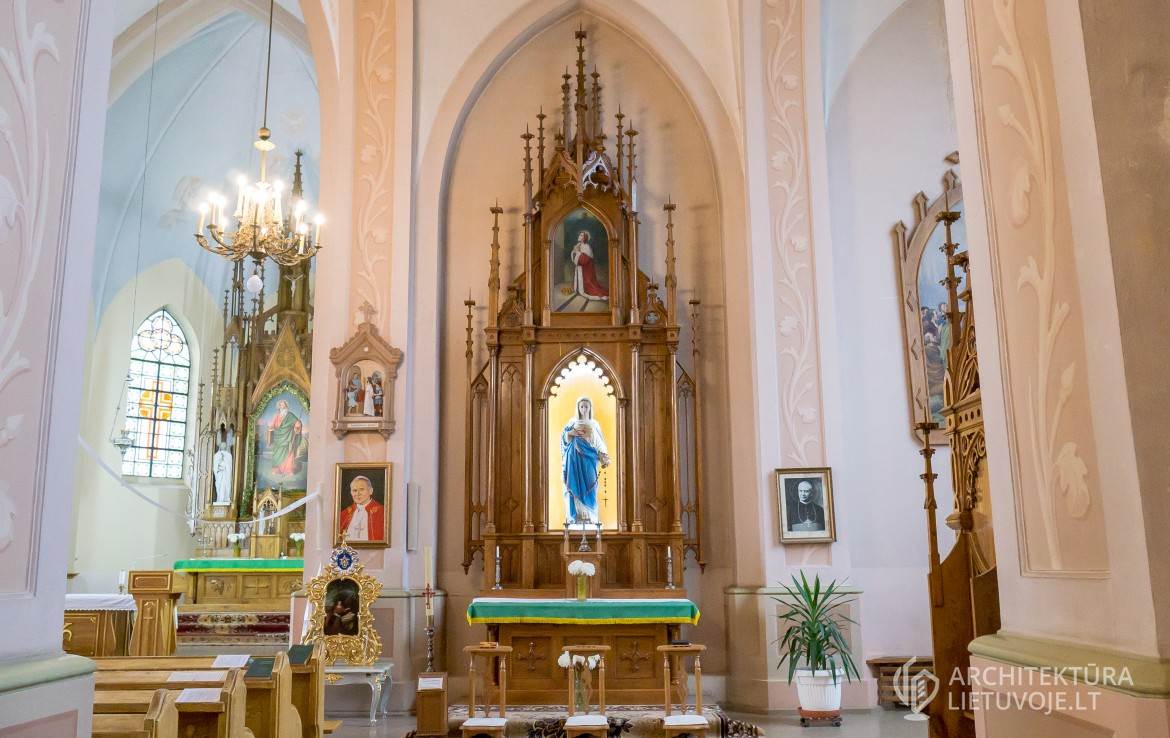 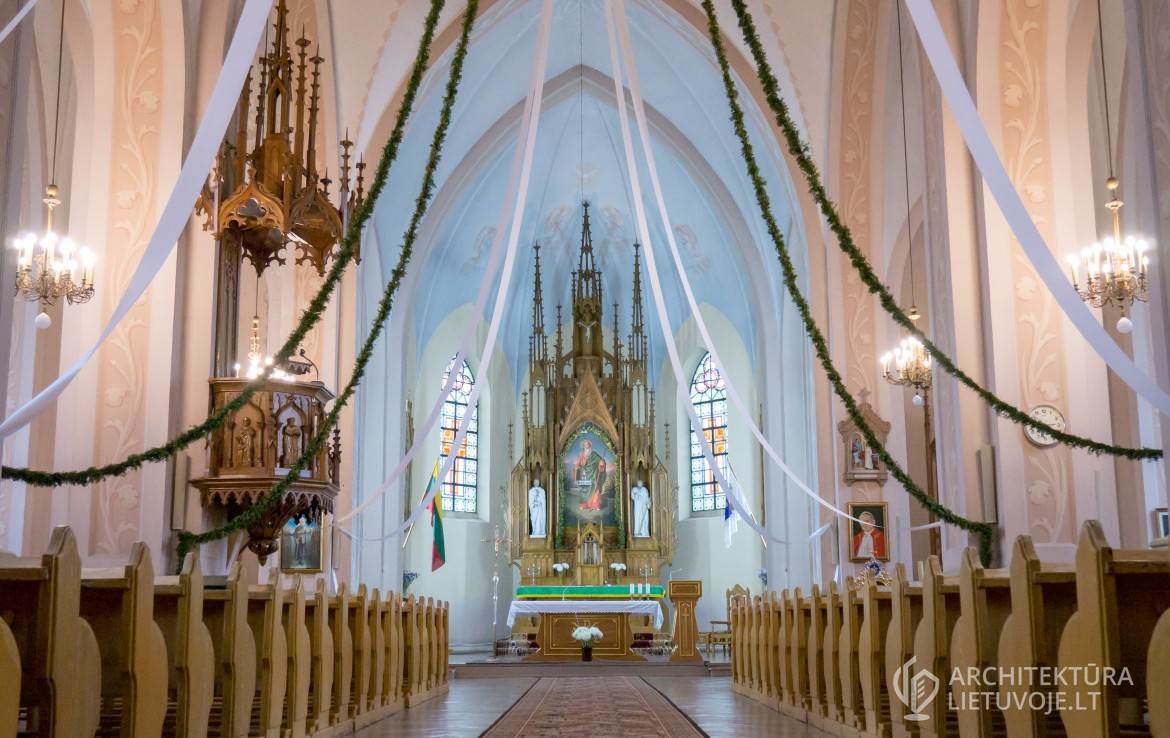 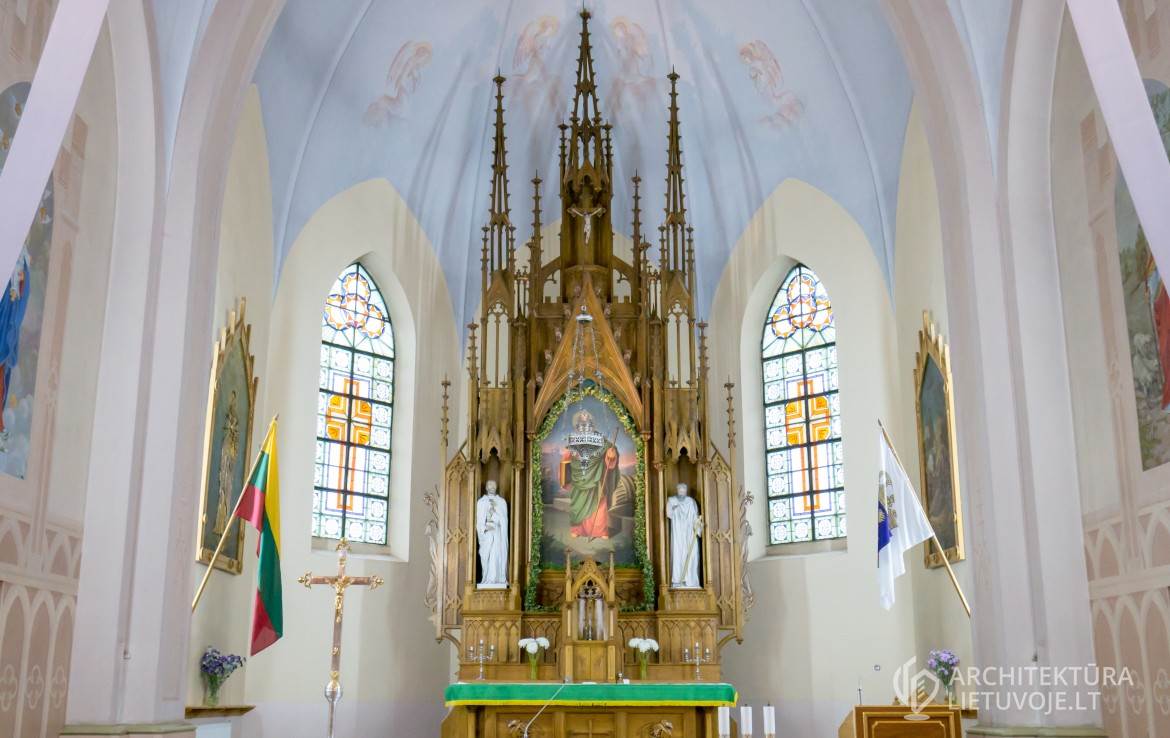 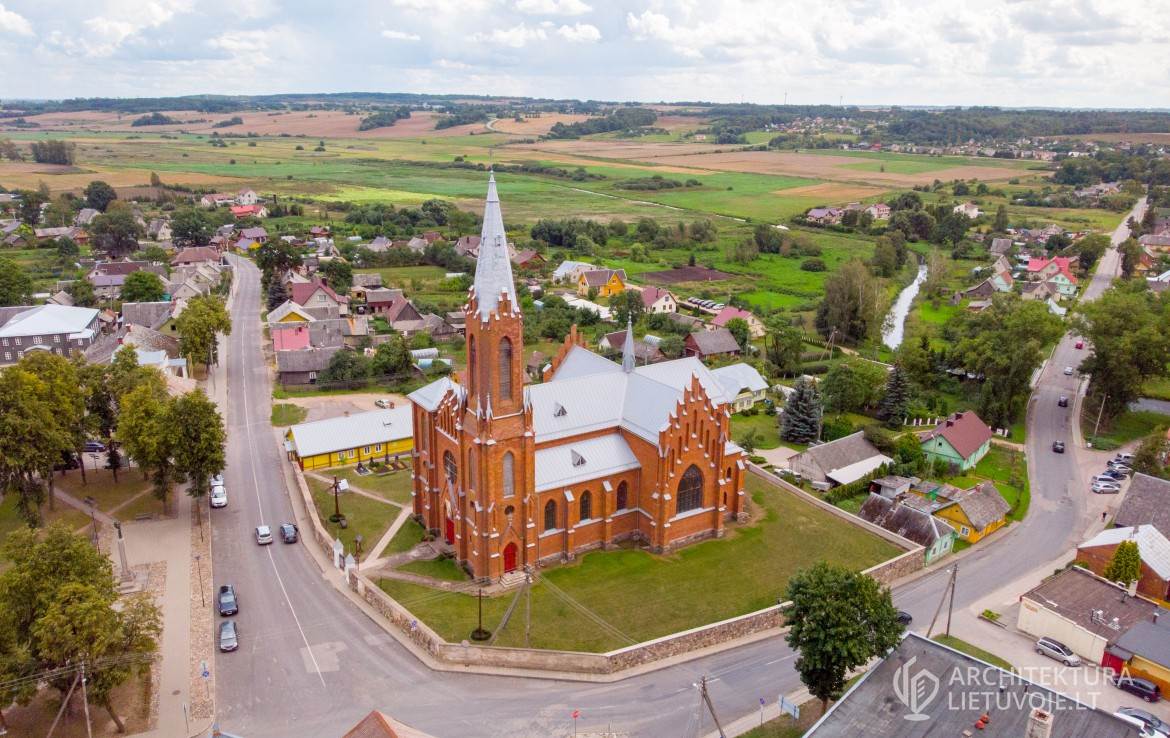 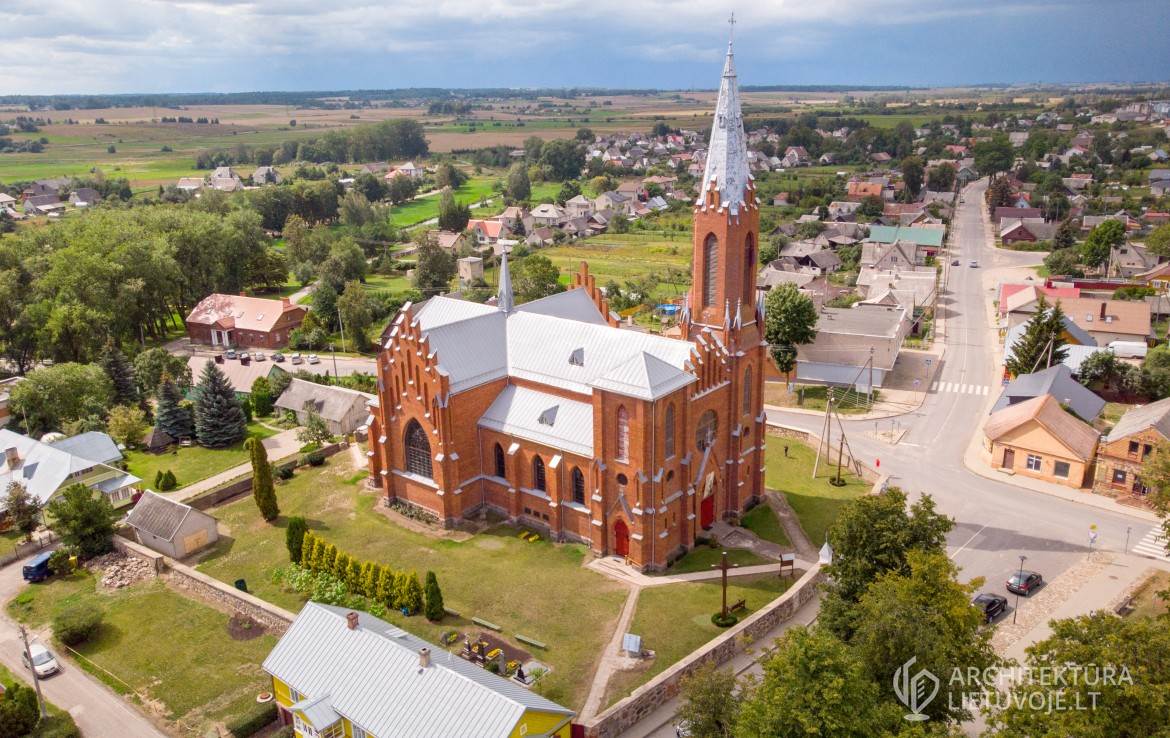 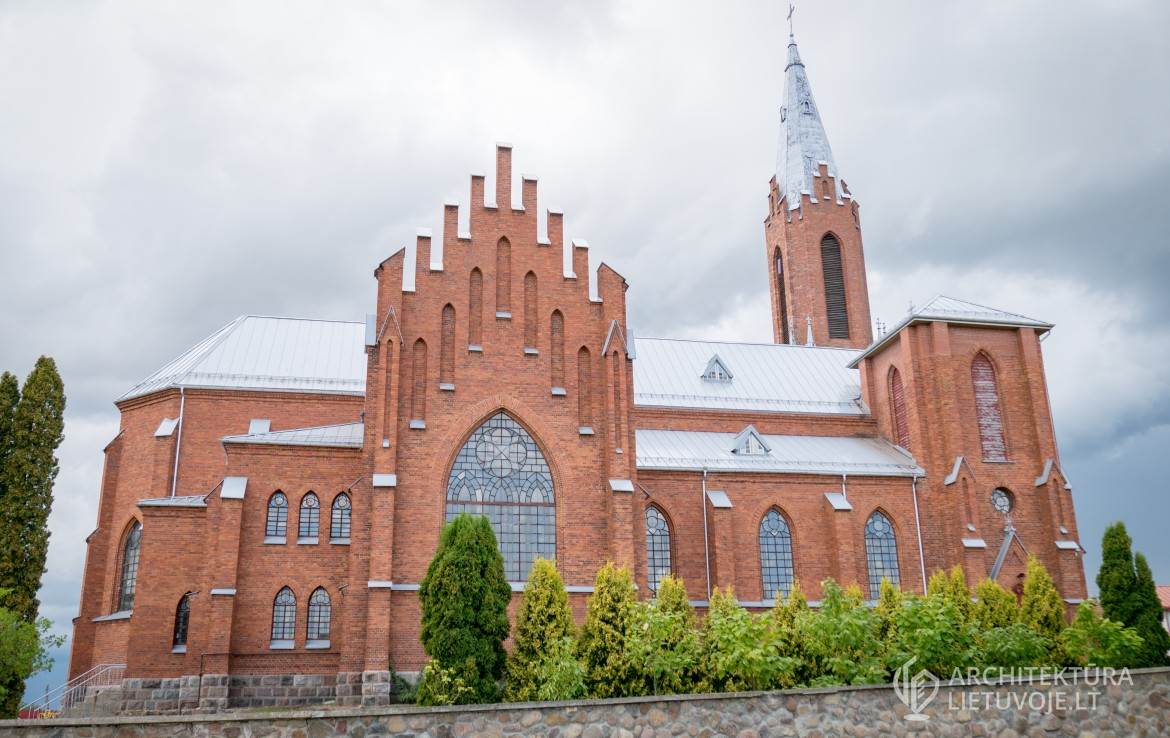 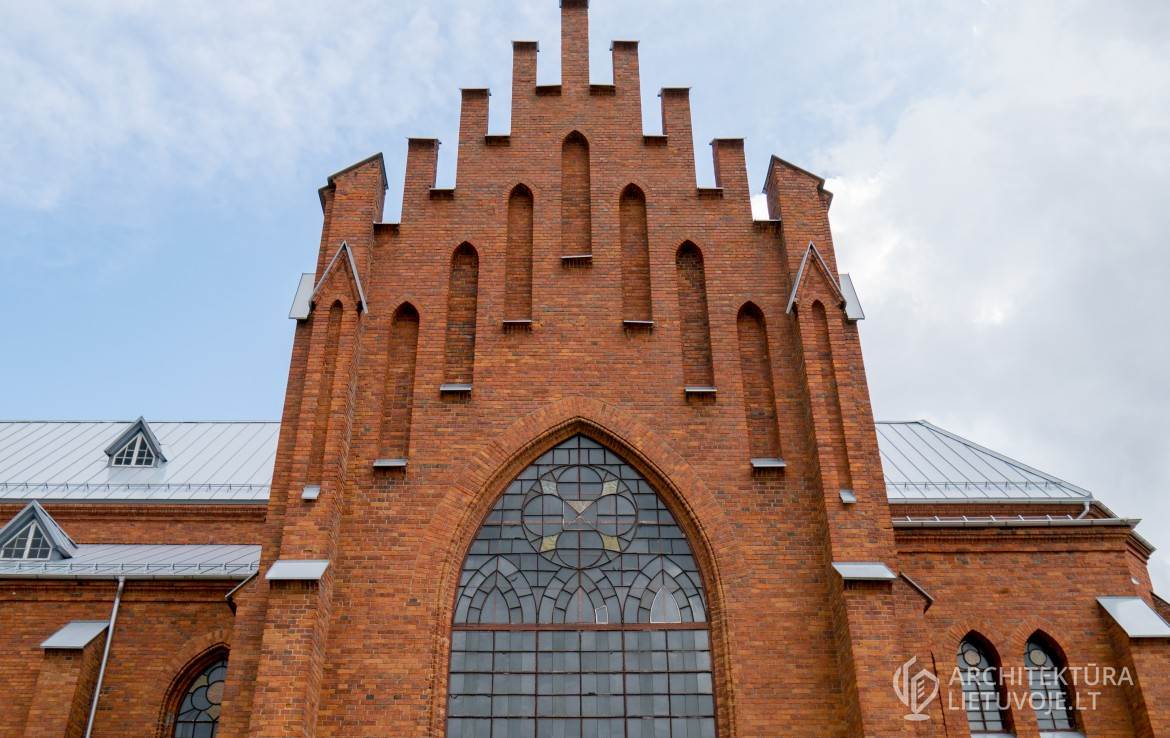 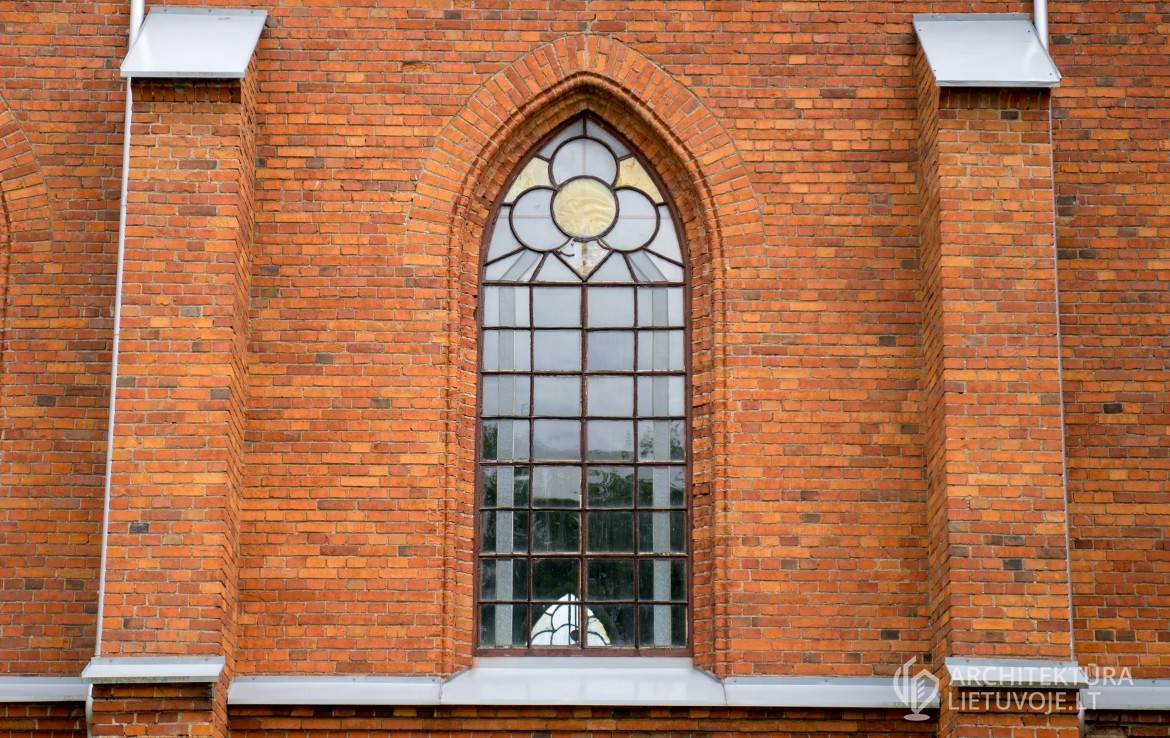 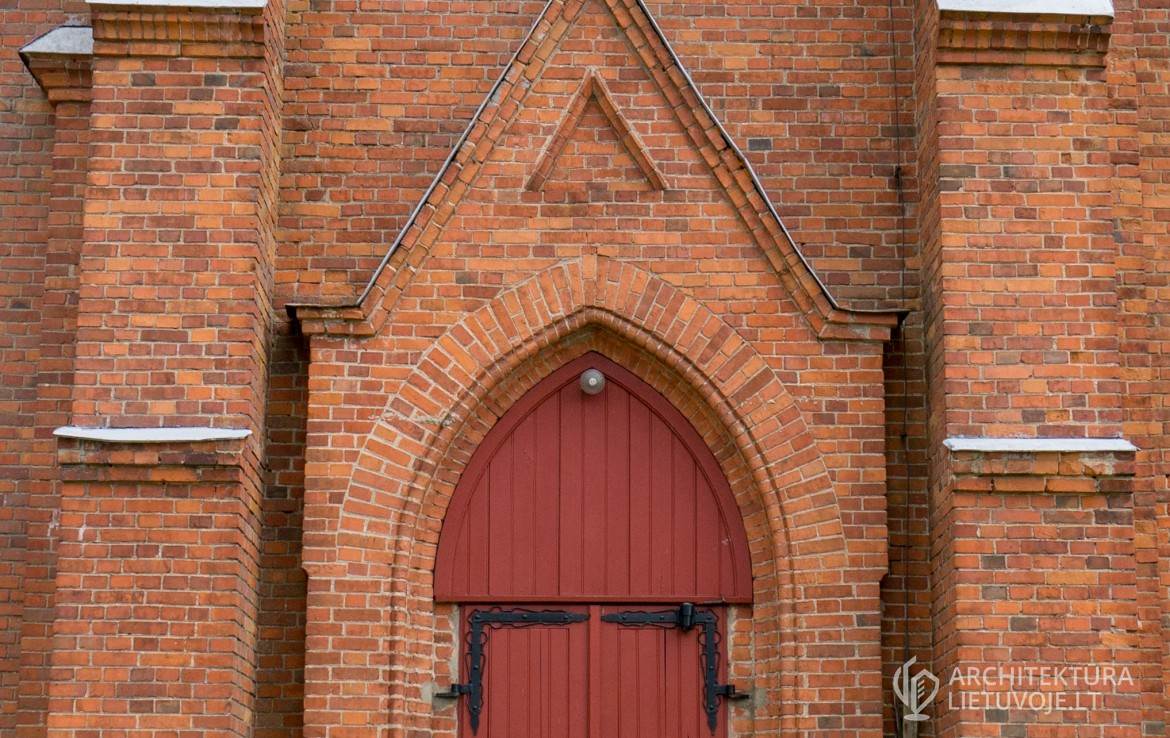 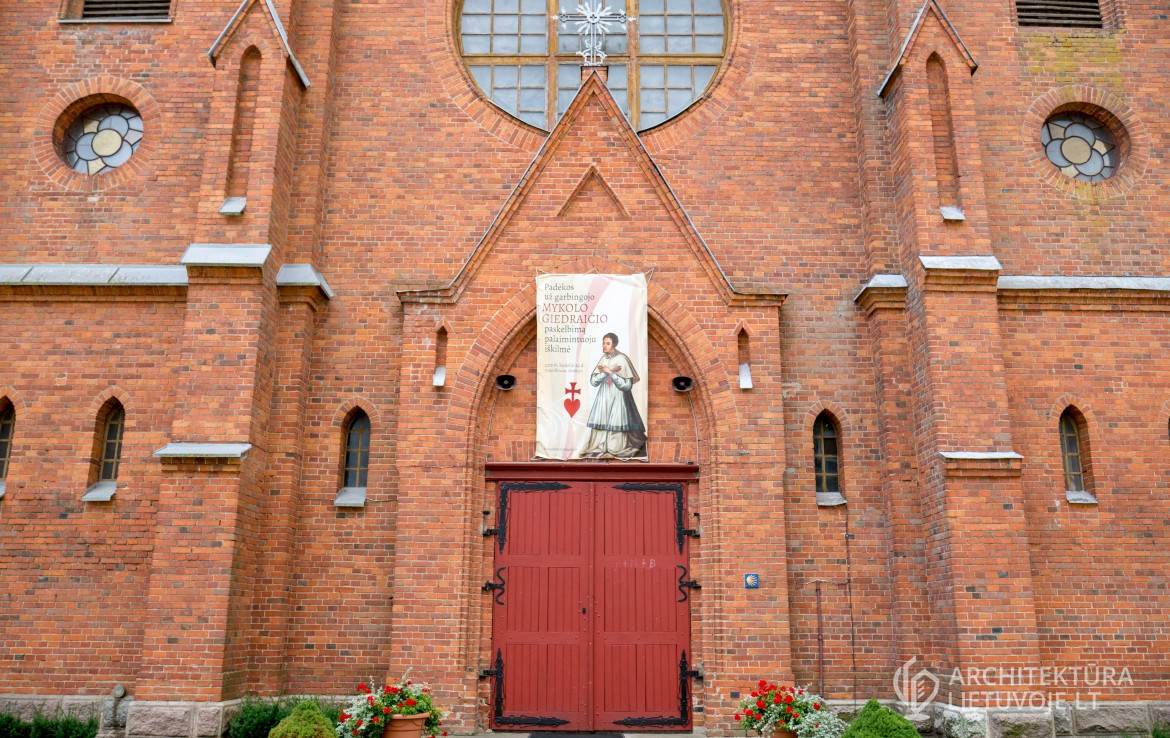 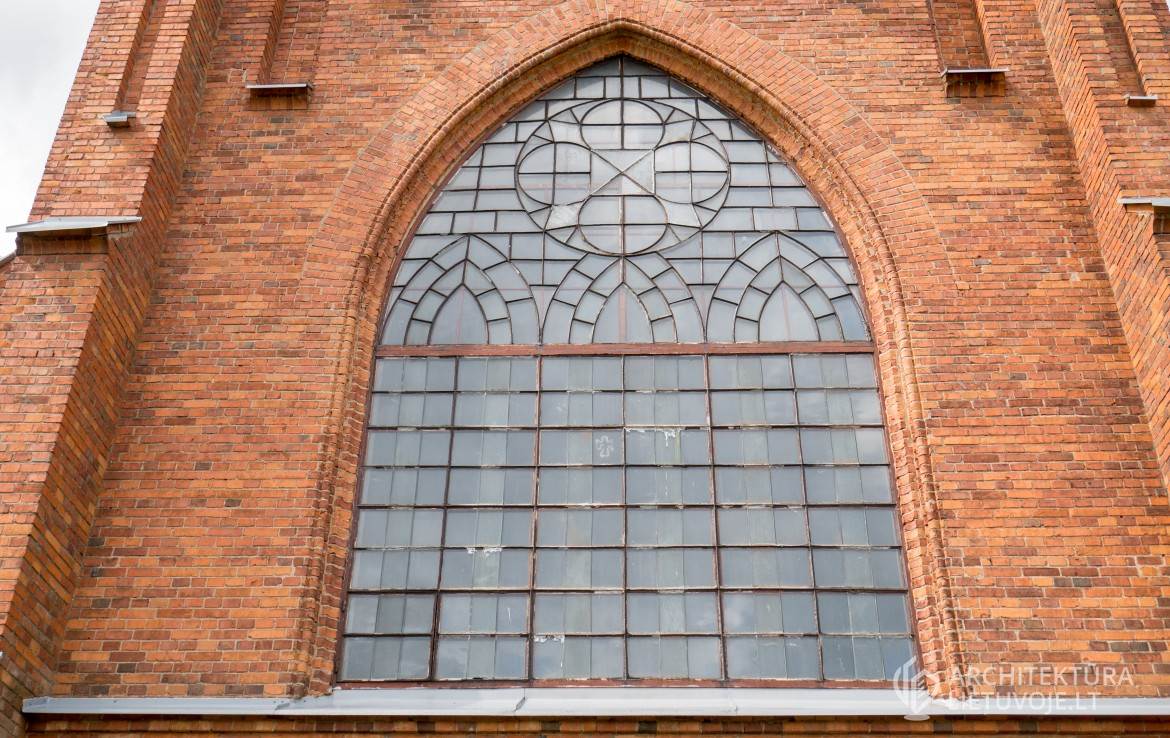 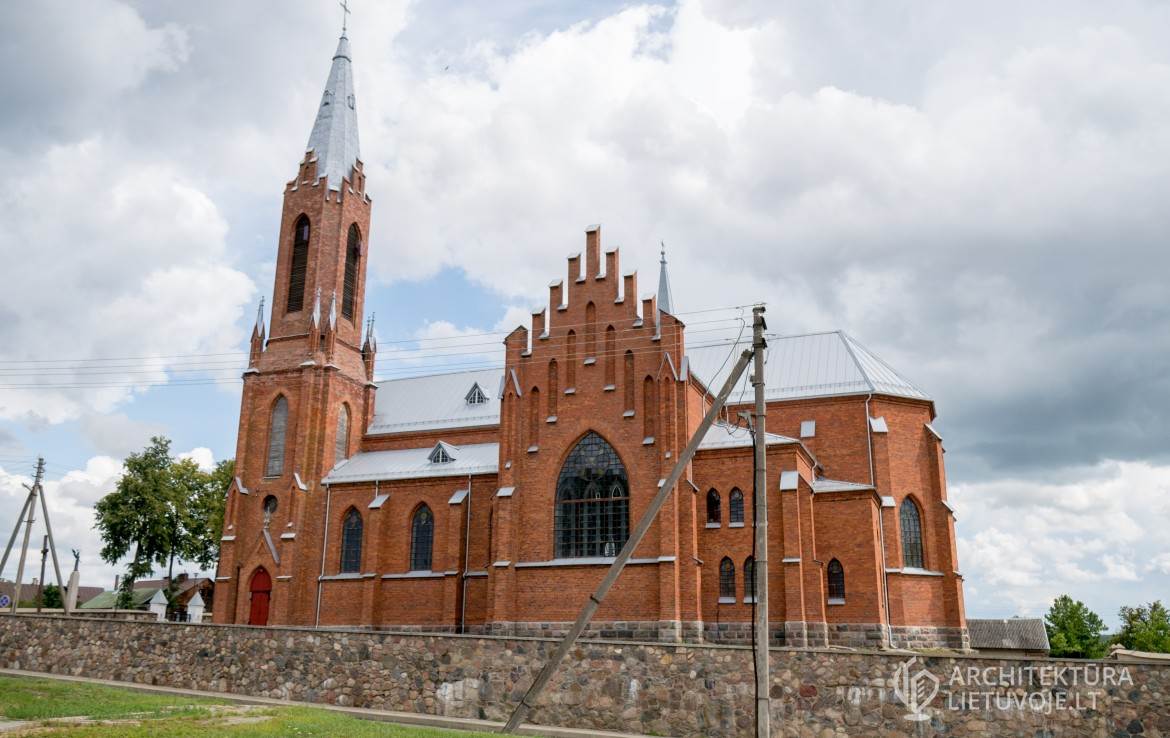 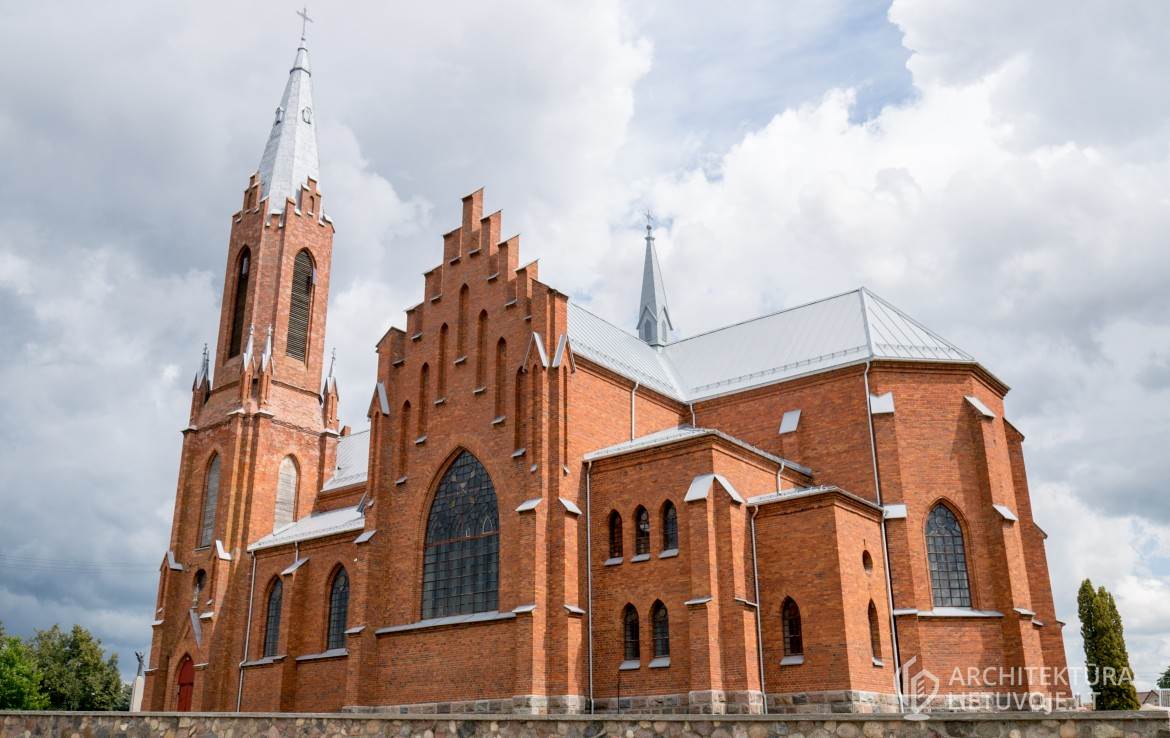 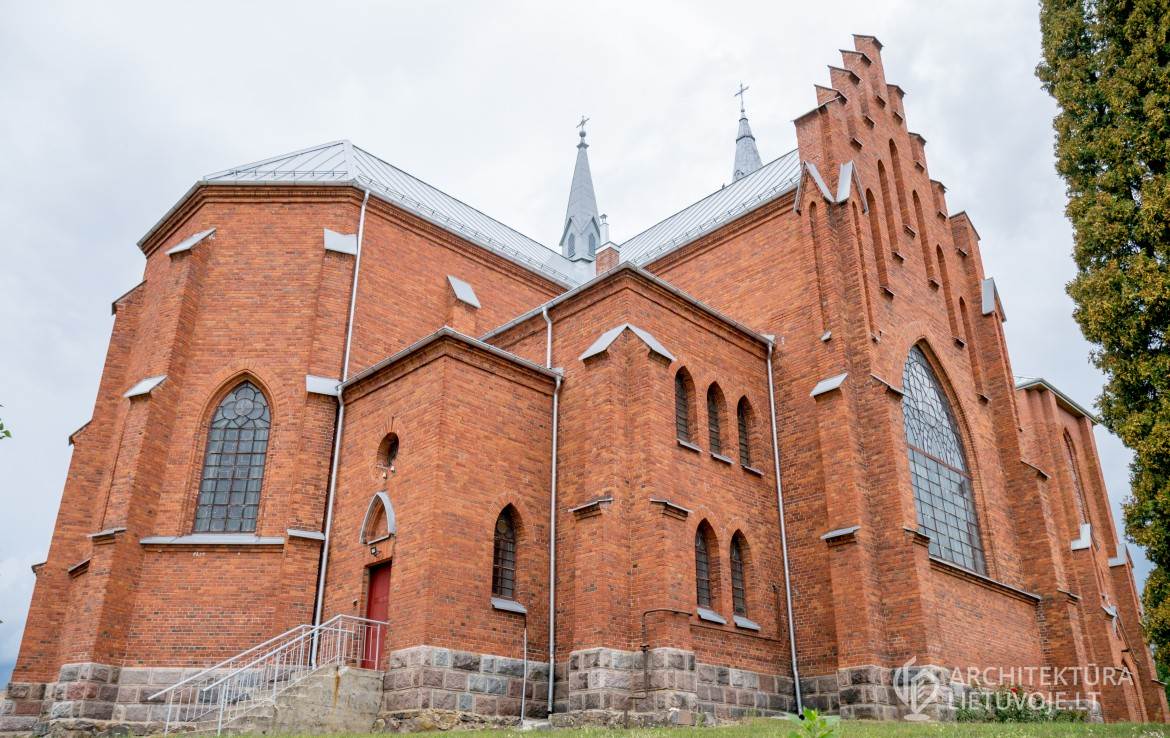