Ensemble of the Saints of Vilnius – the churches of St. Francis of Assisi, Bernardine of Siena, St. Anne and Bernardine Monastery

Building Ensemble of the Vilnius Church of saints Francis of Assisi, Bernardino of Siena and St. Anne and the Bernardine Monastery

One of the most unique architectural ensembles in our country was built thanks to the Order of the Benardine monks: on the second half of the 15th century they were given a plot of land at the outskirts of the city of that time and developed it into an impressive complex in a few hundred years. Soon they built a wooden church, which burned down in 1475 and was replaced with a new one – a large sanctuary, the construction of which was fully completed only in forty years. This is the oldest layer of the modern-day Church of St. Bernard or St. Francis of Assisi. If we disregard such significant marks of the later centuries as the renaissance pediment or chapel buildings, looking at the church we would see a Gothic building.  Pointed arches of the windows, a characteristic frieze, complex buttresses or elegant decorative brick compositions – all these are examples of the brick church shapes, common to that time and here they are significantly richer than in many other similar churches that survived to this day.

Gothic turrets, shooting upward on the corners of the building and small shooting openings signify of another role of this sanctuary – it was also supposed to serve for defensive purposes, especially keeping in mind that the complex marked the edge of the city in that time. Between the main volume and the presbytery, we can see another – a much higher – tower, which is also a rare example of a Gothic belfry in Lithuania: it is believed that it used to have a high spire, which was lost in the course of history. Although the church’s interior has been much more influenced by later rearrangements, the columns that support the vaults and divide the space are still reminiscent of the Gothic period, while the side naves feature diamond and net vaults. Although there are many aspects that make this church special, looking at the walls we can see the original 16th century Gothic murals – the examples of Gothic painting are very few in Lithuania; it is believed that the entire interior of the sanctuary was painted with murals before.

The monastery building was built together with the church and has seen much more changes in the course of time, experiencing larger or smaller reconstructions nearly in every age. As it was common, monastery buildings used to create a rectangular inner yard, the configuration of which survived to our times. Although the architecture of the buildings has changed, looking at the wing, attached to the wall of the church, we can notice restored Gothic shapes. The two-storey façade is divided by a row of buttresses, featuring a different cut on each level. The pointed windows are arranged between them, while the top the building is finished with a castellated cornice.

The Church of St. Bernardine is an example of a Gothic church that is rather common, while the nearby Church of St. Anne features complex and dynamic shapes of the late Gothic period, which are quite few in our country. The first church, which stood here, burned down together with the first Bernardine church – researchers believe that the modern-day building was completed in 1581. The church is much smaller than its neighbour, but both its location and architectural decisions make it more massive visually than it actually is. Compositions of dynamic pointy arches and narrow rectangular verticals, as well as the play of towers, turrets and pinnacles on the front façade create a rather strong and dashing impression.

The light and dynamic view of the sanctuary was also achieved by such aspects like improved construction technology and the masterful work of an unknown architect – the walls are rather thin and the buttresses are particularly narrow; aside from the attic, there are nearly no closed planes on the façades of the church. Profiled buttresses of the presbytery also rise into turrets, which remind of the ones on the front façade, decorated with spires and buds. Upon walking through the sanctuary’s door into a modest-sized single-nave space, one can notice a significantly more modest interior, while the Gothic interior has not survived; it is well worth to take a look at the vaults, covering the church. The individual neo-Gothic belfry nearby the church was built in the 19th c. – the architect, who designed it, tried to follow the shapes of the church.

Ensemble of the Saints of Vilnius – the churches of St. Francis of Assisi, Bernardine of Siena, St. Anne and Bernardine Monastery - Maironio g. 10, Vilnius 01124, Lietuva 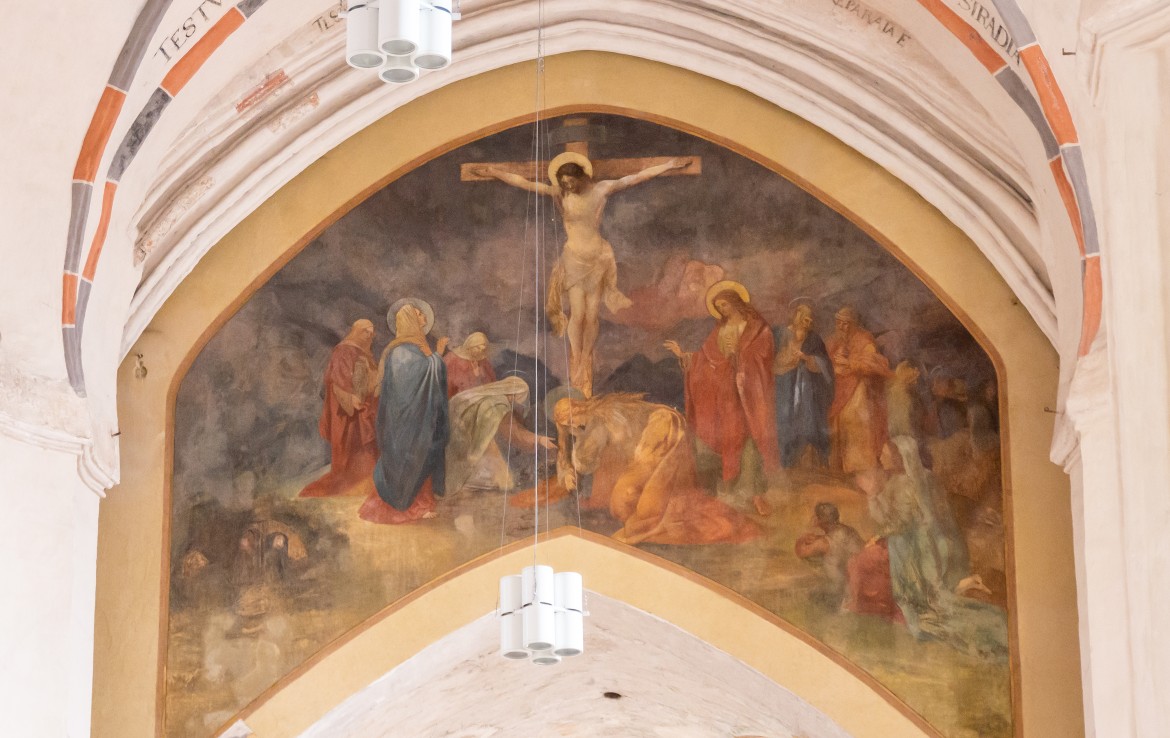 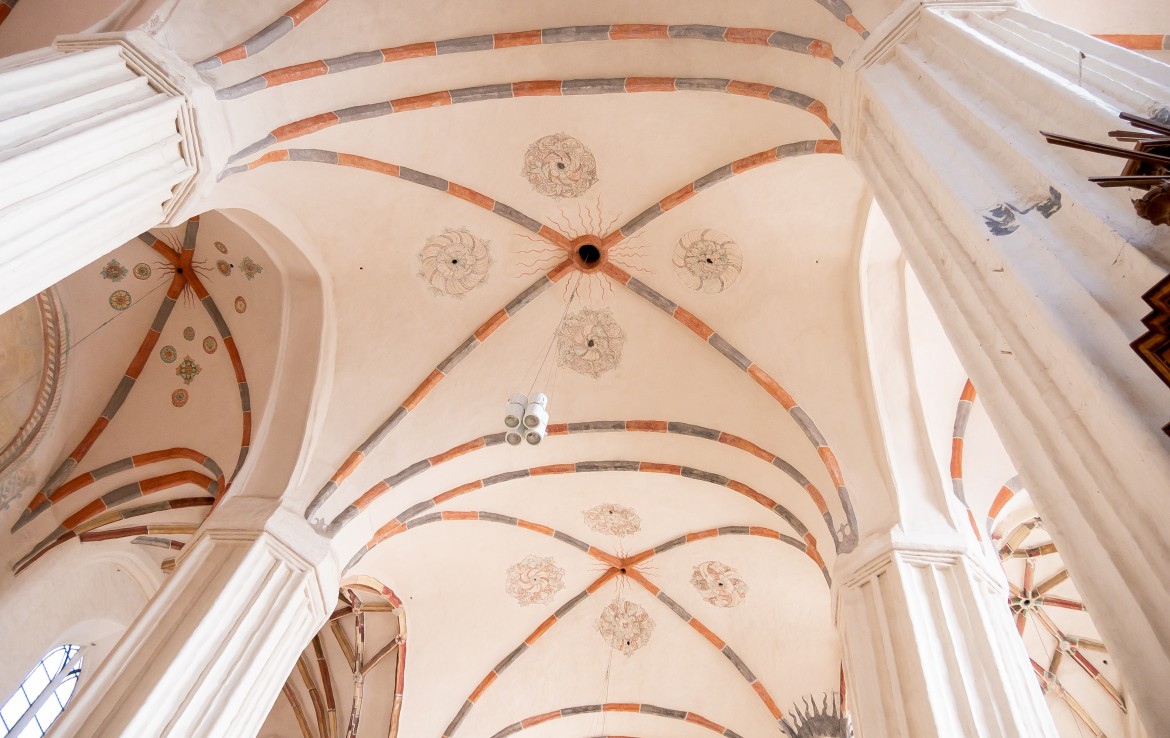 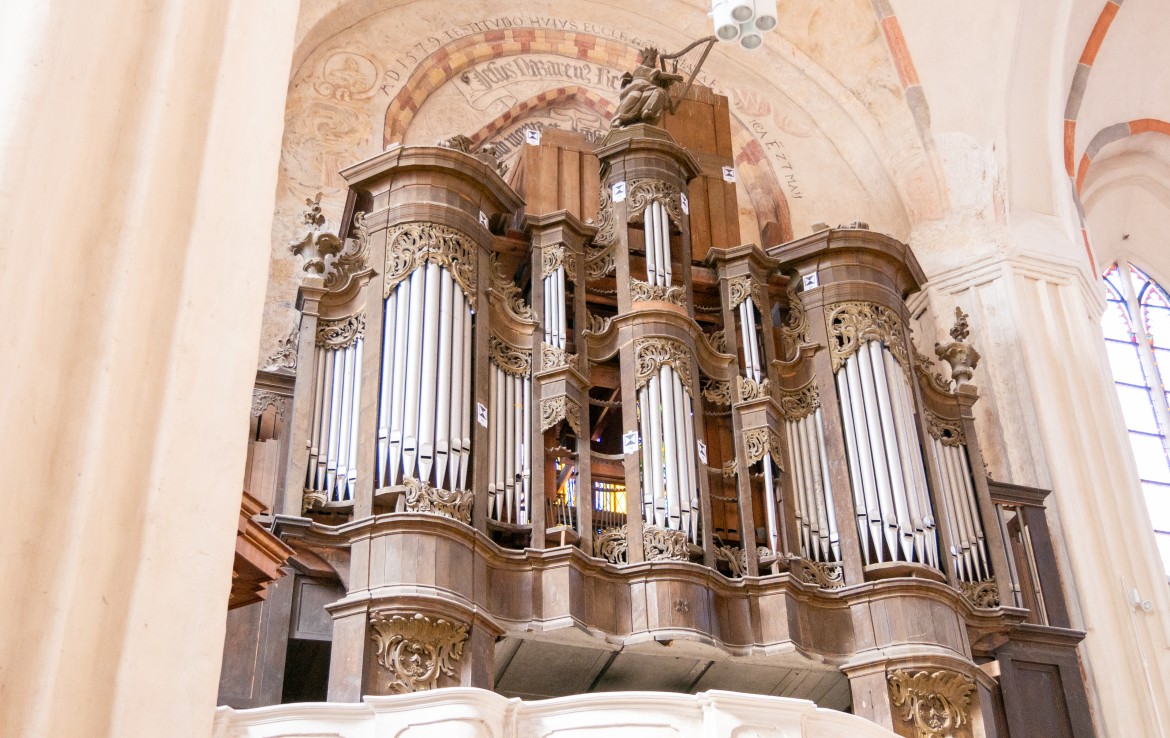 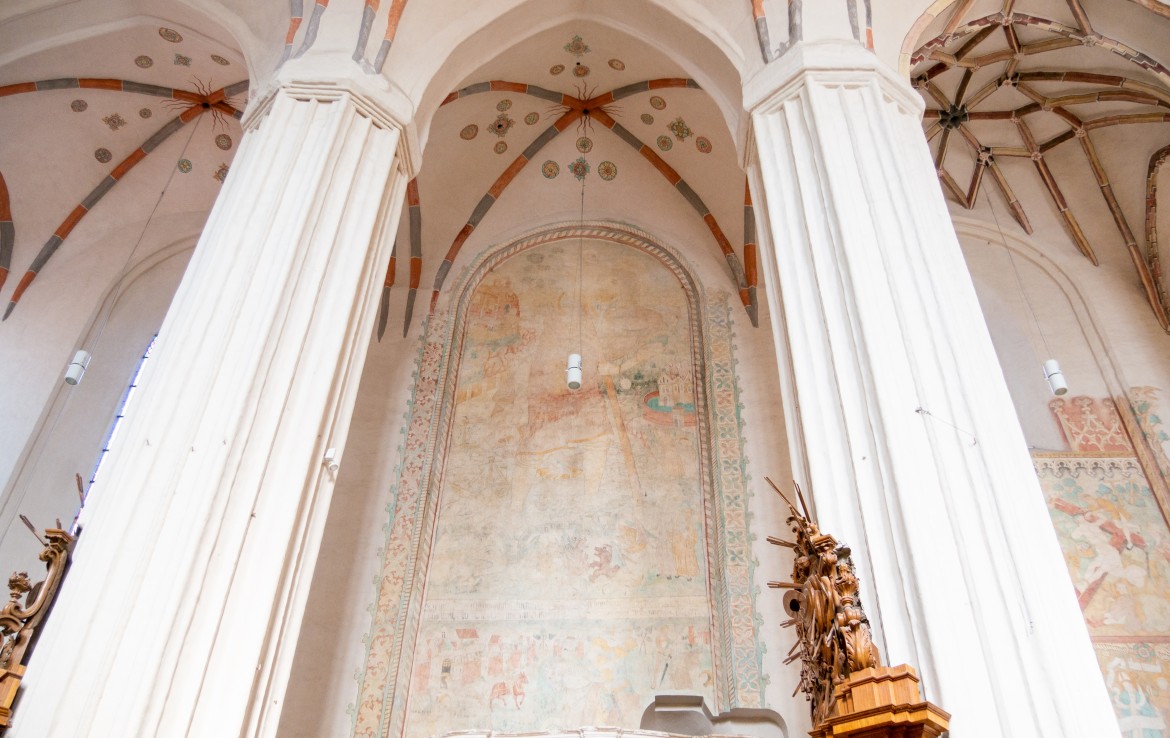 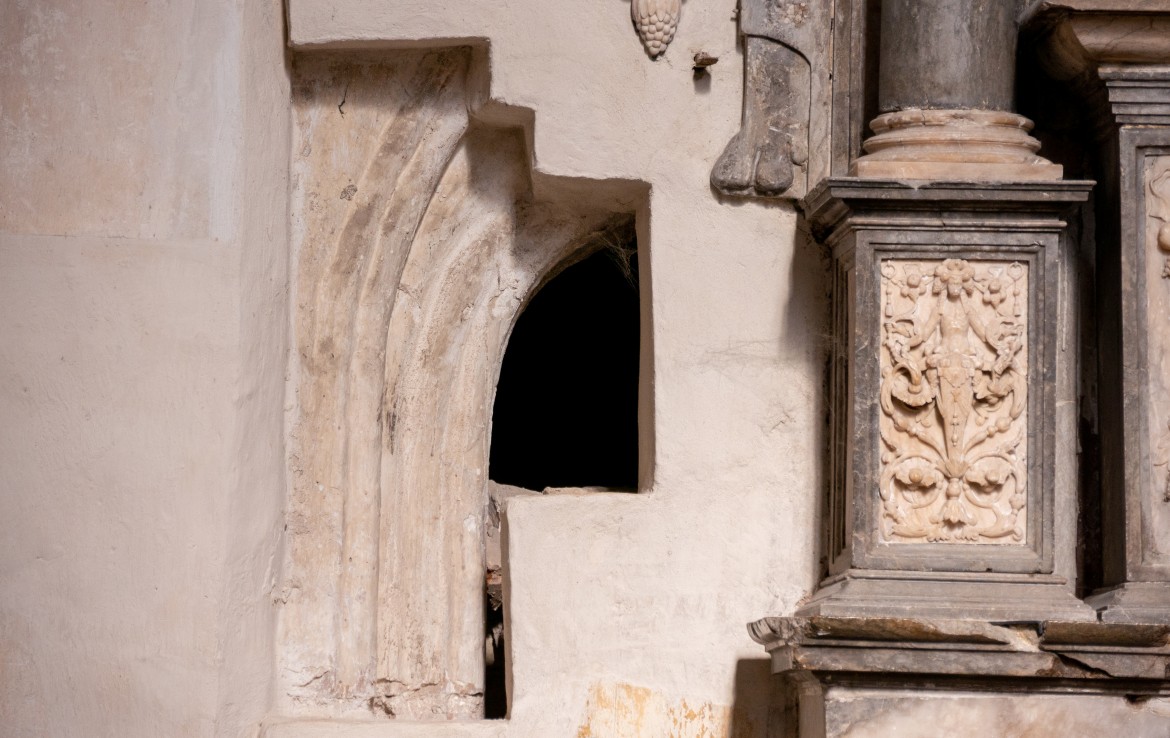 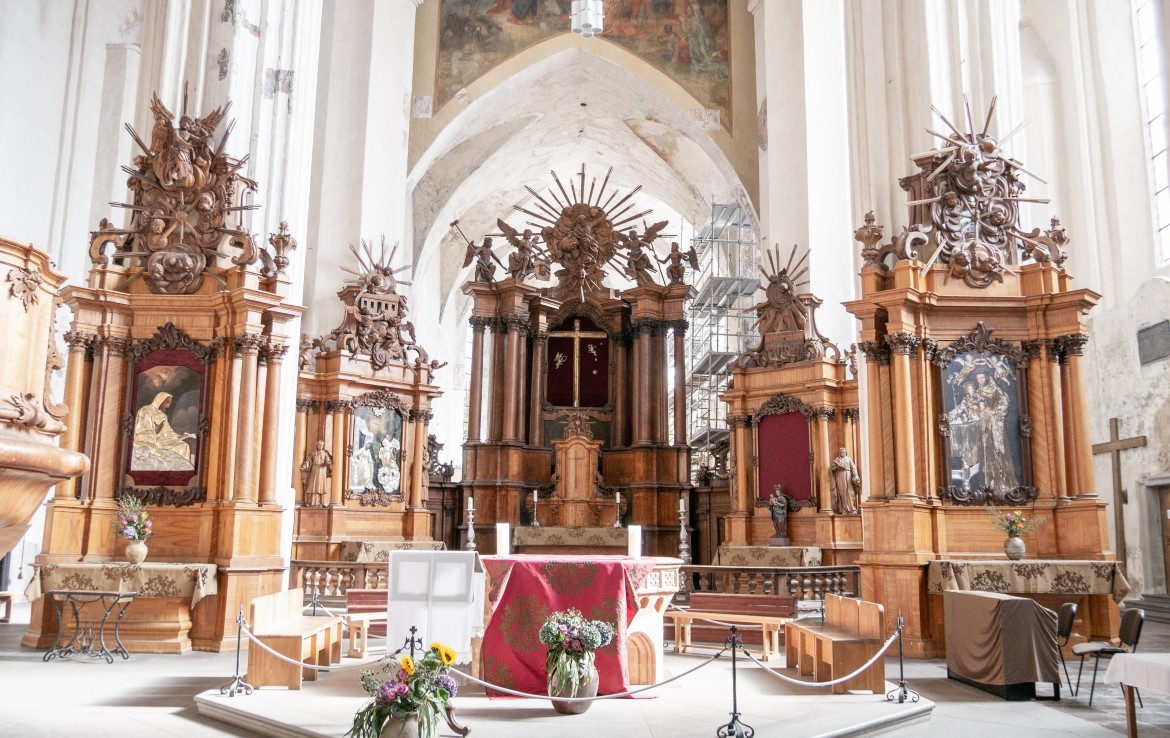 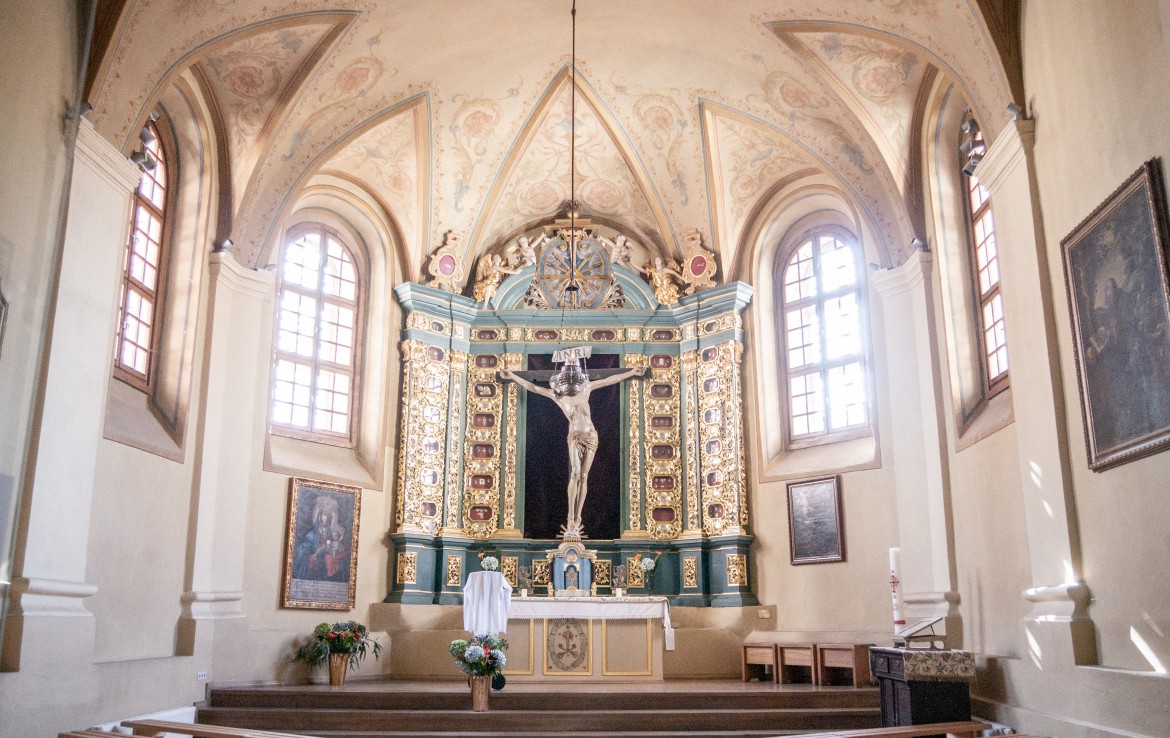 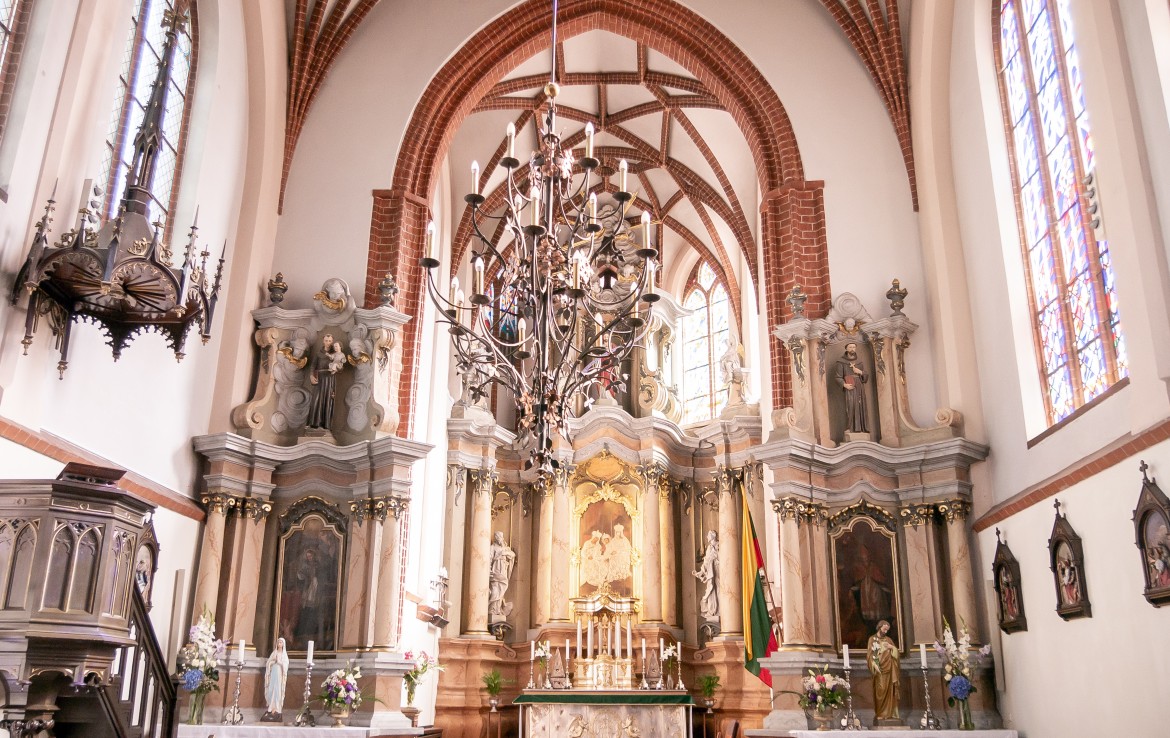 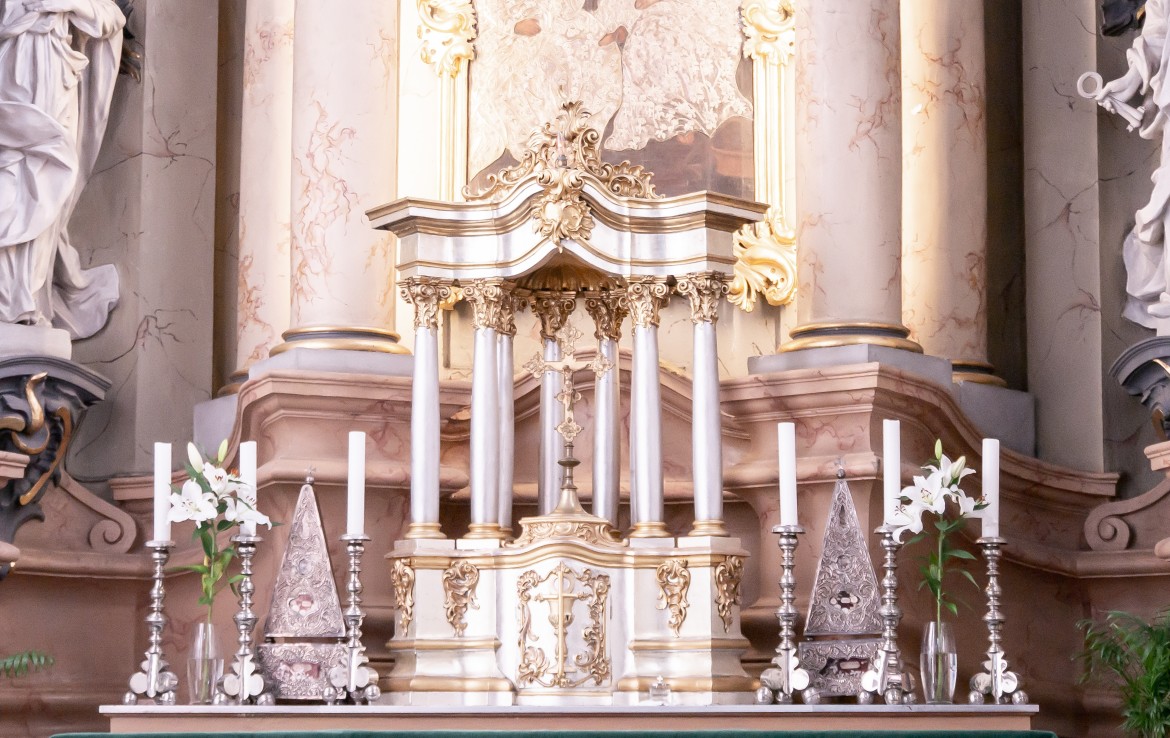 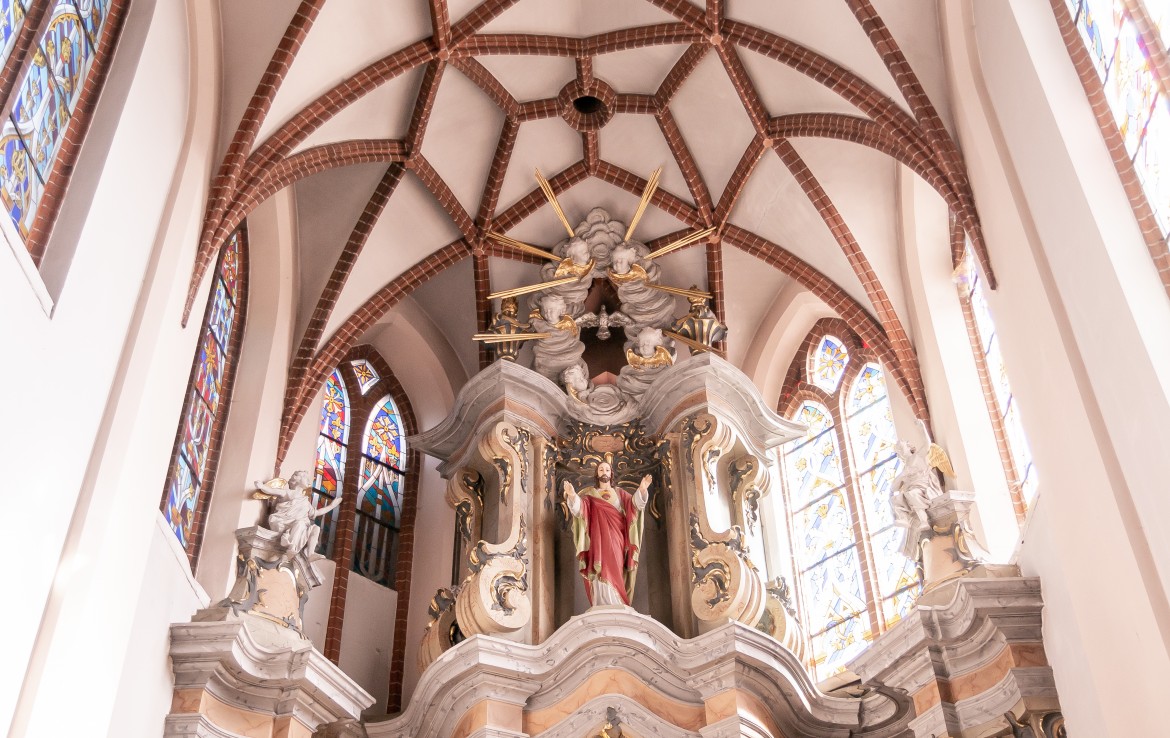 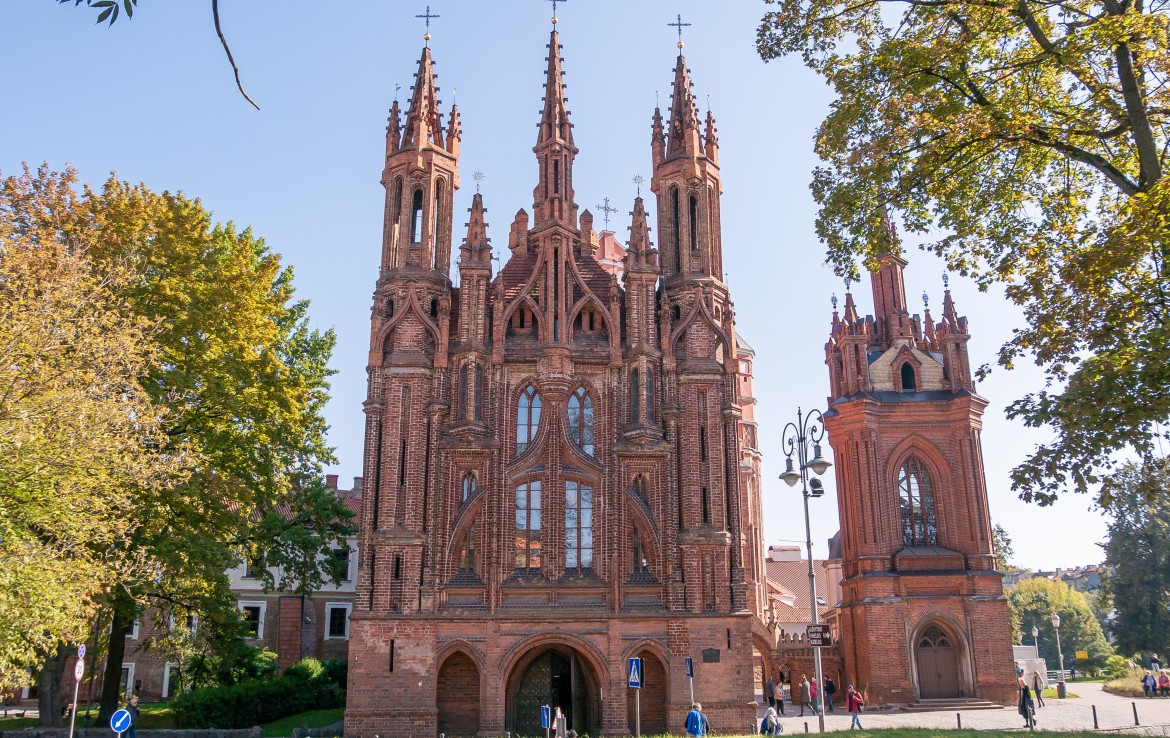 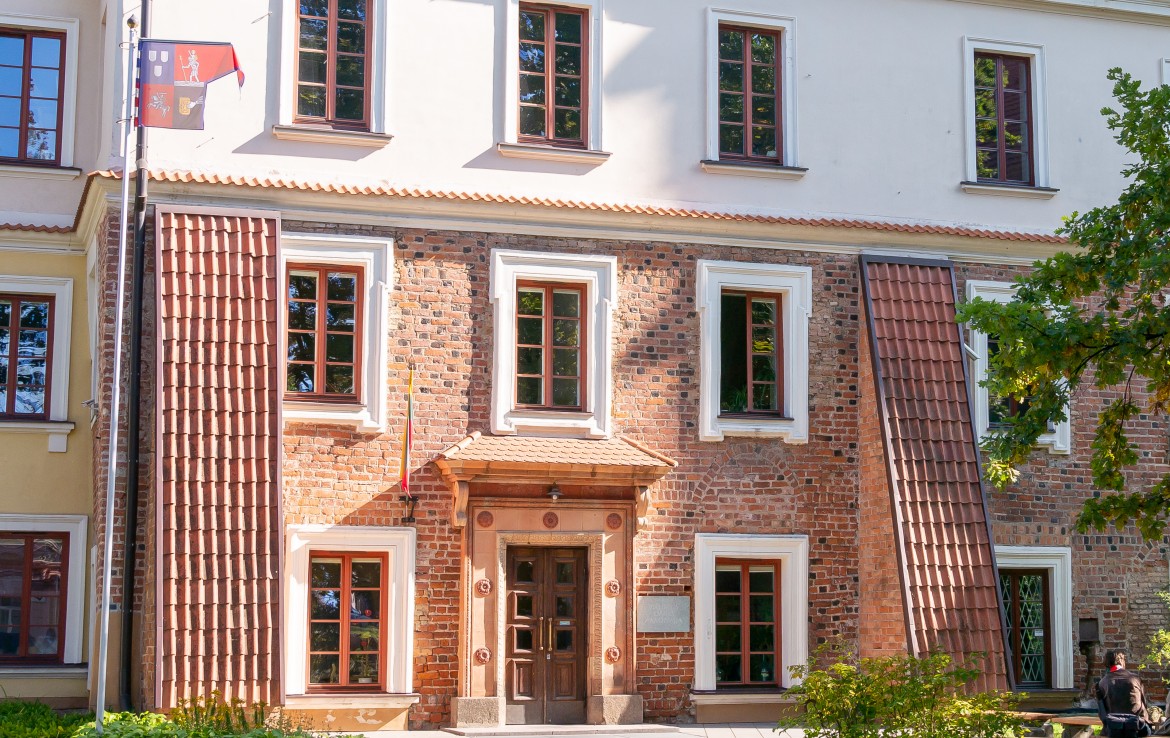 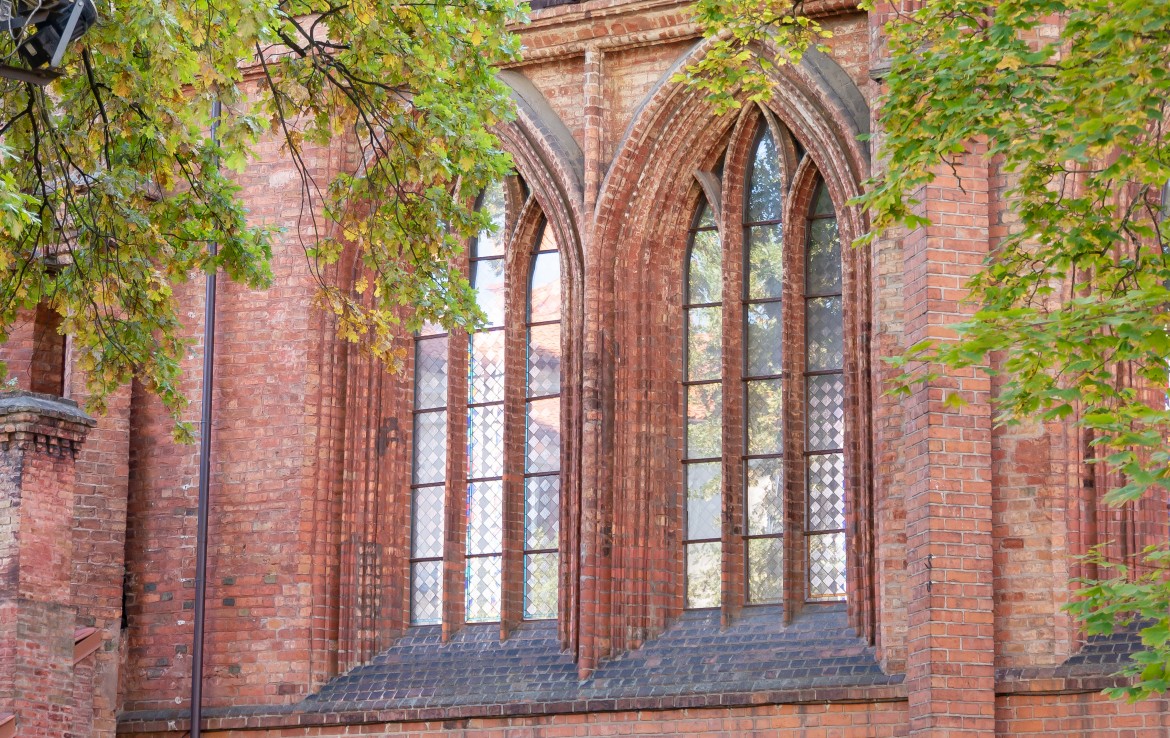 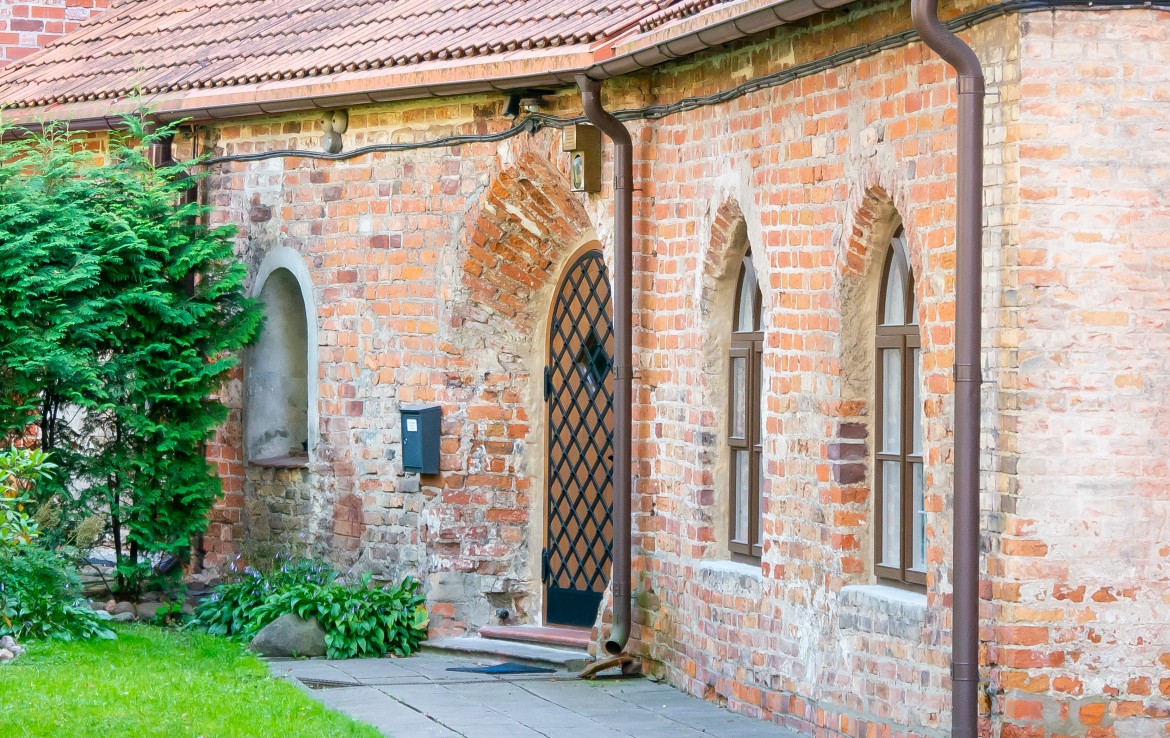 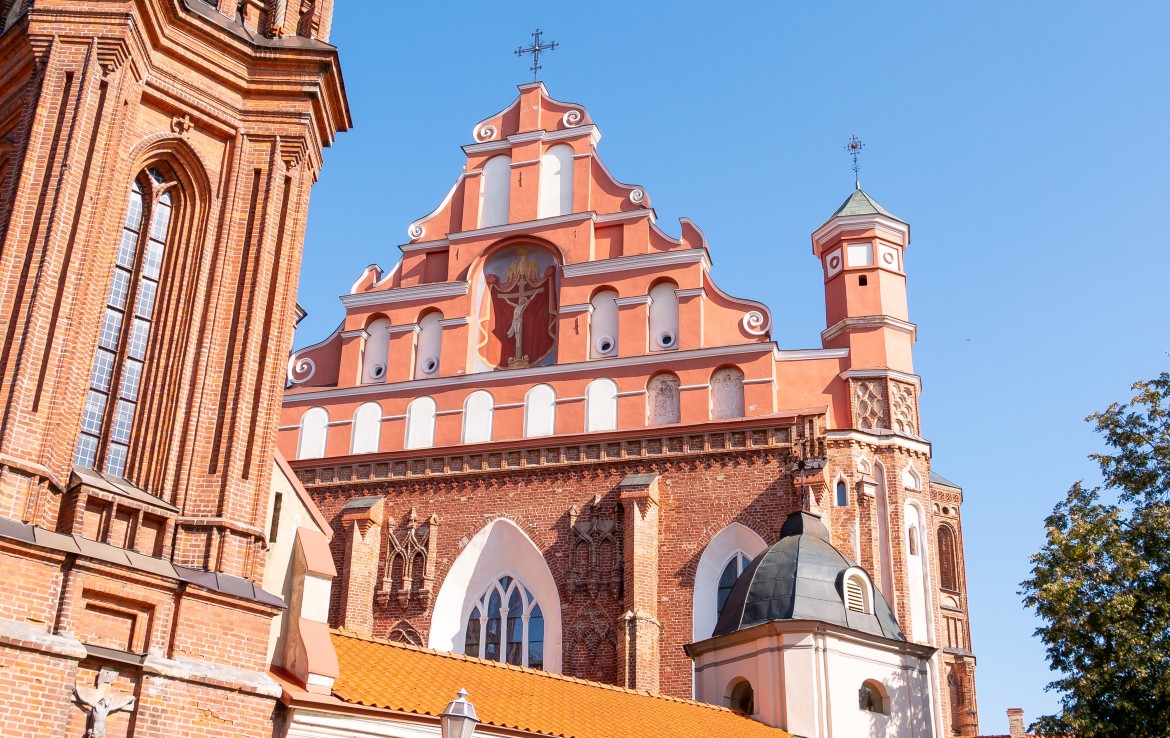 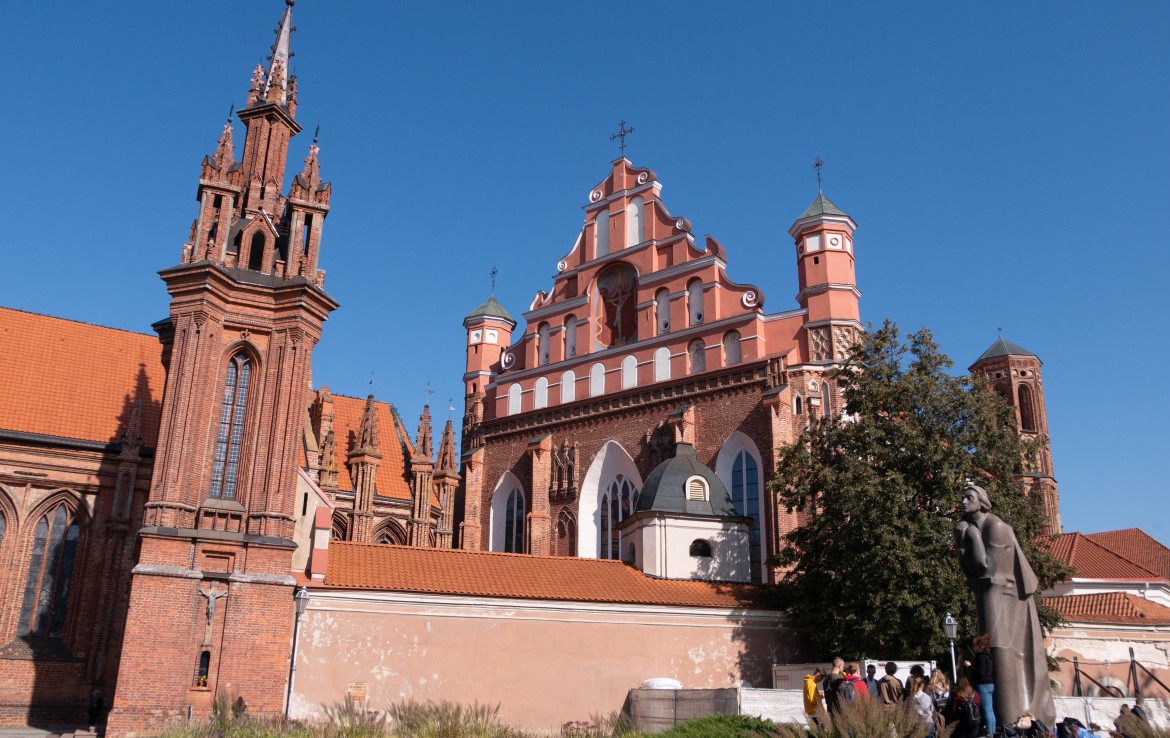 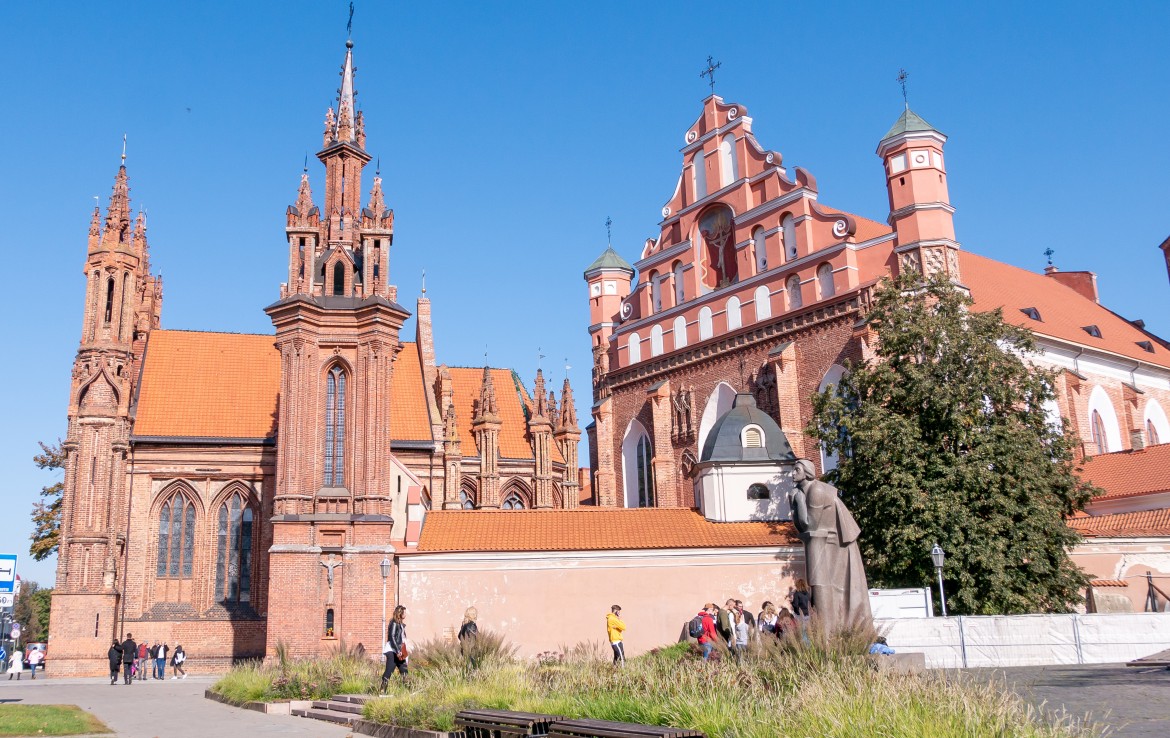 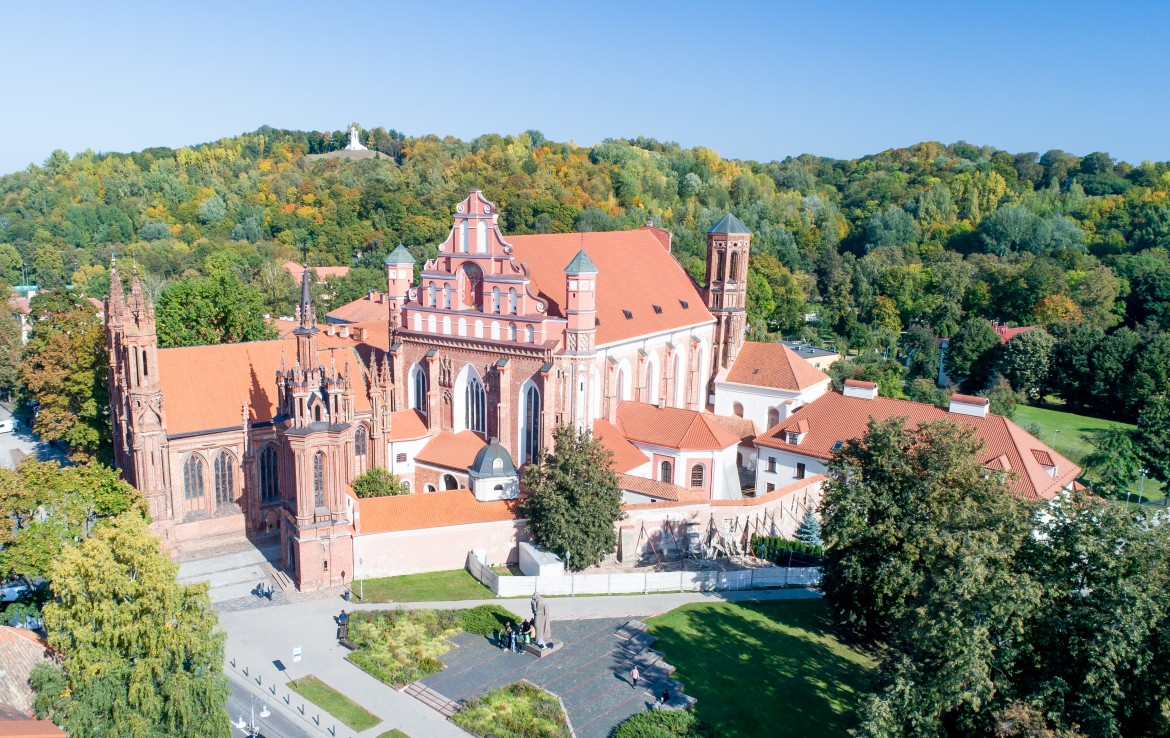 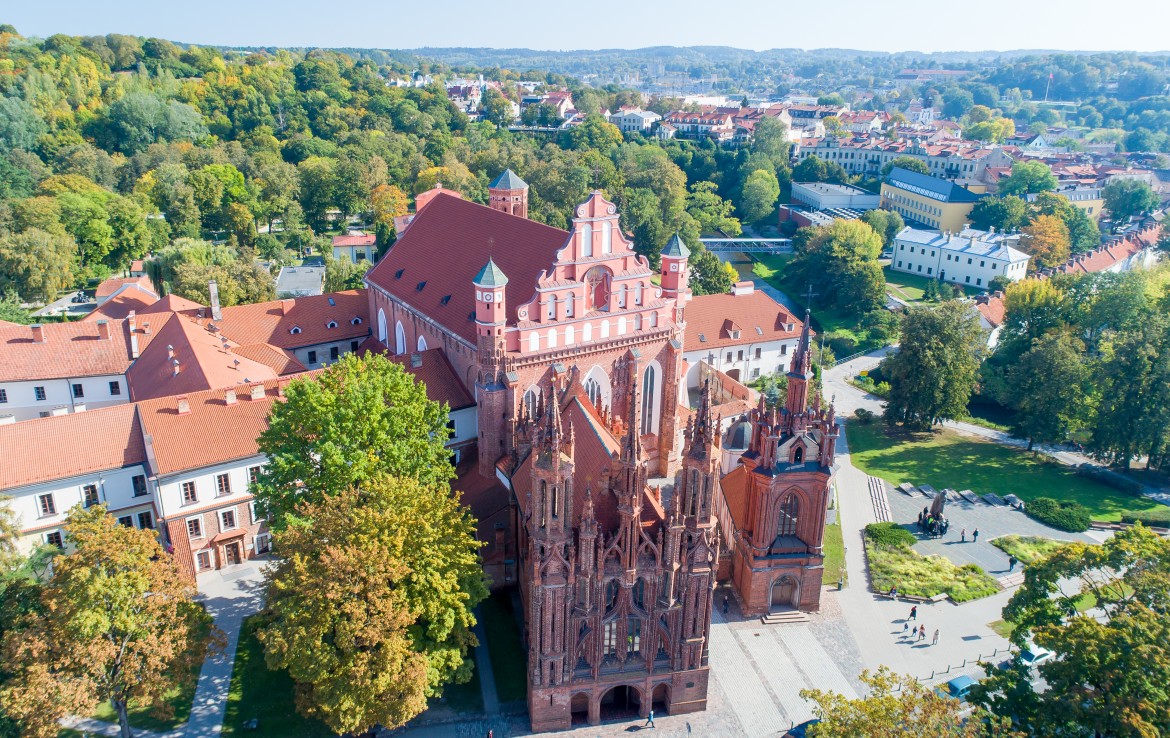 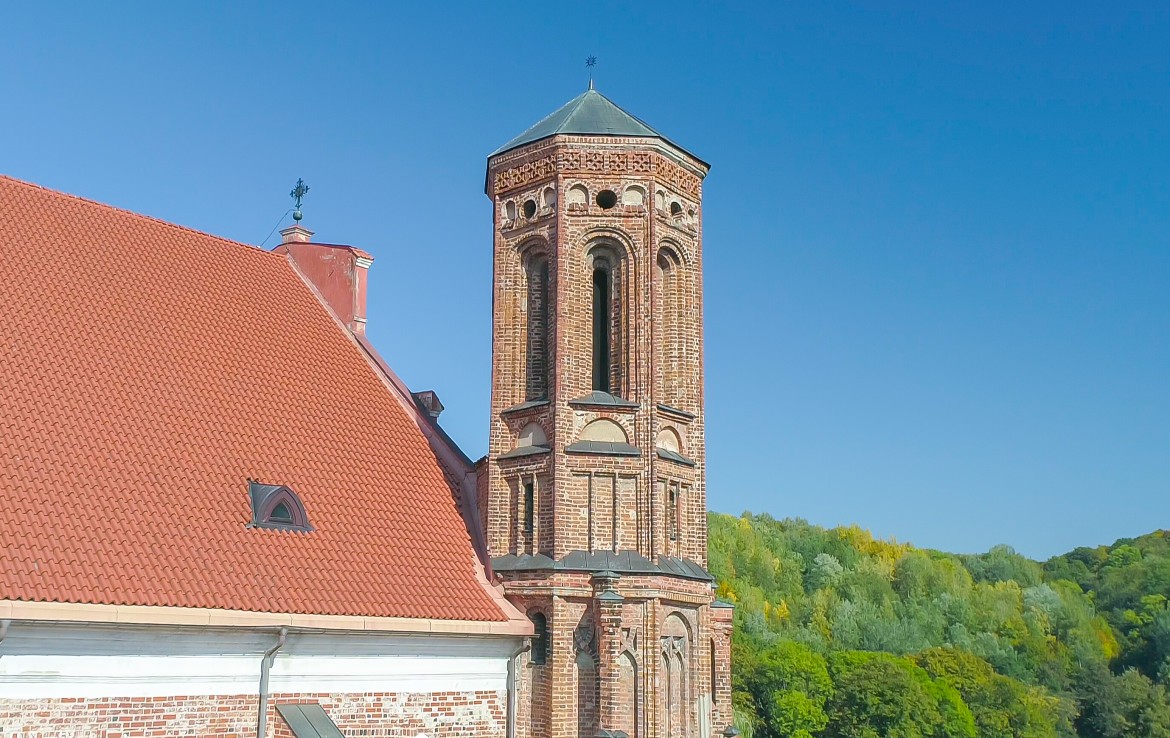 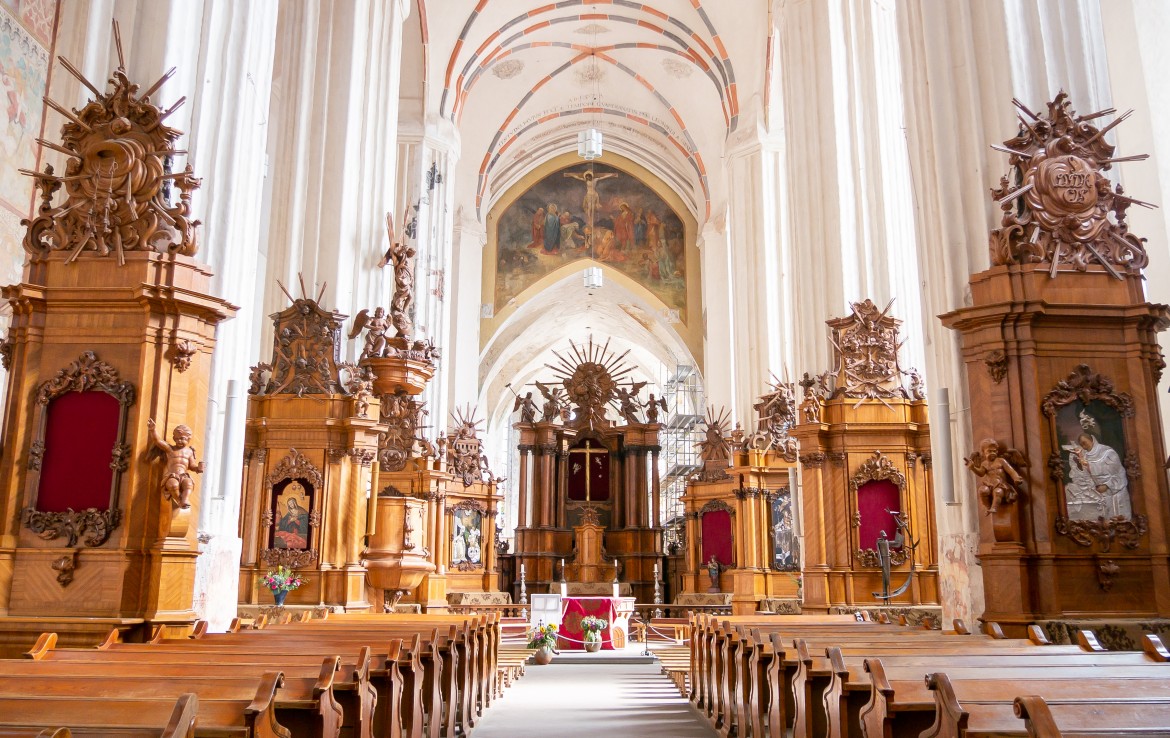 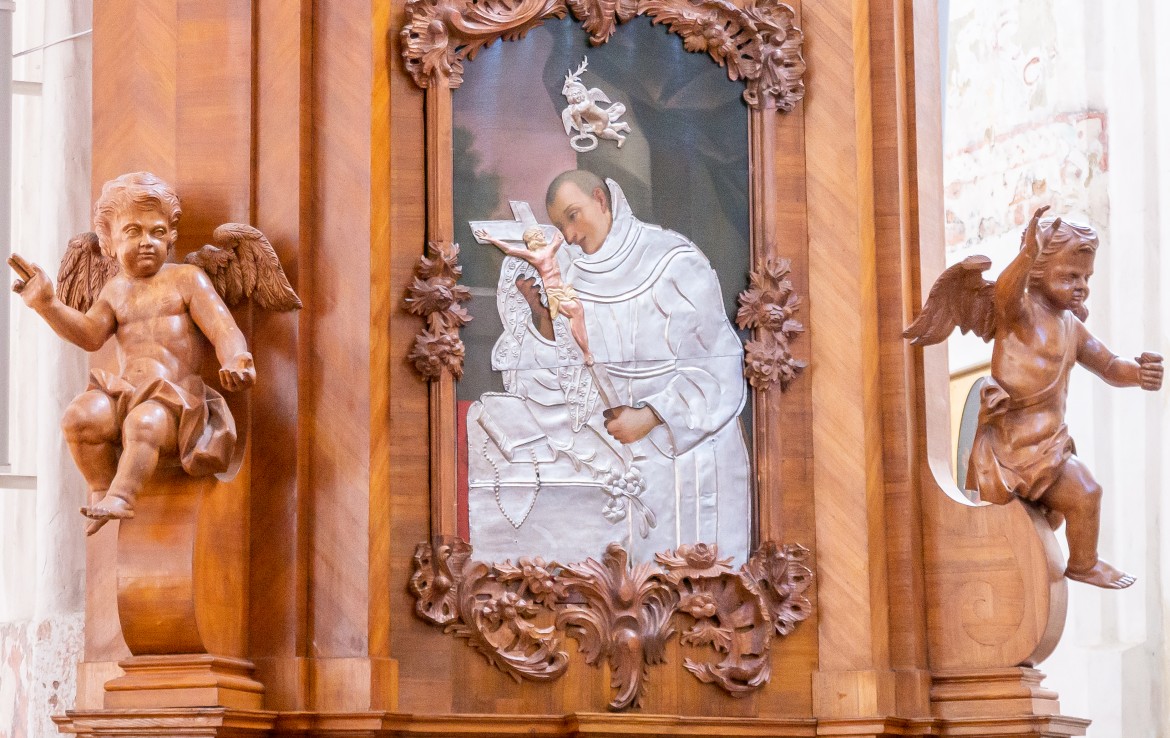 Ensemble of the Saints of Vilnius – the churches of St. Francis of Assisi, Bernardine of Siena, St. Anne and Bernardine Monastery - Maironio g. 10, Vilnius 01124, Lietuva