Near the churches of St. Anne and St. Bernardine, highlighting the Gothic ensemble of the Bernardine Monastery, 1594 marked the beginning of the construction of the most prominent Renaissance cult building, which survived in our capital. The construction of this and the Bernardine Nunnery, located nearby, was funded by Leon Sapieha, Chancellor of the Grand Duchy of Lithuania, who had also planned that this sanctuary should serve as his family’s mausoleum. Although the nunnery was opened earlier, the location was completed only in 1627. In the late 19th century both the church and the monastery were closed by the tsarist authorities, but later the buildings regained their primary functions. In the early Soviet era the nuns were forced to leave it again and the sanctuary was closed.  Currently the complex has been renovated and the church hosts a museum of ecclesiastic art.

The sanctuary still has some features of Gothic construction – narrow, high windows and buttresses on the northern façade; the latter are much smaller, coming into peculiar pilasters. In spite of that, this is primarily an example of the Renaissance period – this fact is best illustrated by the system of buttresses, dividing the front façade, the massive entablature, surrounding the building, and characteristic turrets, covered with Renaissance multilevel headpieces. The high, dominating pediment, supported by volutes is finished with a semi-circular cornice.

The inside space is covered with a barrel vault – this construction element is one of the key interior details, symbolising the breaking point between the medieval and renaissance architecture. The vault features complex rib patterns, which create diamond ornaments, characteristic to that period – among the floral decorative rose-windows in between, we can also see the coat of arms of the Sapieha family. What is interesting is that the presbytery of the church is integrated into its main volume. Upon looking there, you can see one of the most expressive late Renaissance altars in Lithuania, which survived since it was constructed. Another impressive detail of the church interior reminds us of its mausoleum purpose – that is the tombstone of Leon Sapieha and his wives, featuring late Renaissance shapes combined with Baroque details.

Nunnery buildings are also predominated by Renaissance features and shape a unified ensemble with the sanctuary. Near the church we can see the so-called Valavičiai Palace – a building, characterised by the early period shapes, dating back to the first half of the 16th century. Namely this building, later owned by Sapiehas, was given to the Bernardine sisters and reconstructed for the purposes of the nunnery. The newer building of the nunnery formed a closed yard, leaning against the church, characteristic to the time. Upon entering the building (Maironio str. 11), we can find a large room – the so-called refectory, where the nuns used to eat and hold meetings. In the ribbed vault, just like in the sanctuary, there is the coat of arms of Sapieha family. Walking around the building you can also see fragments of painted elements of décor, revealed during the restoration. In order to get a notion of the entire ensemble, it is worth taking a look at the nunnery building on the eastern side of the plot and the restored utility building. The tower, highlighting the intersection of the streets, which also acts as a gate, comes from the Baroque period. Its helmet-like shapes harmoniously fit the sanctuary. 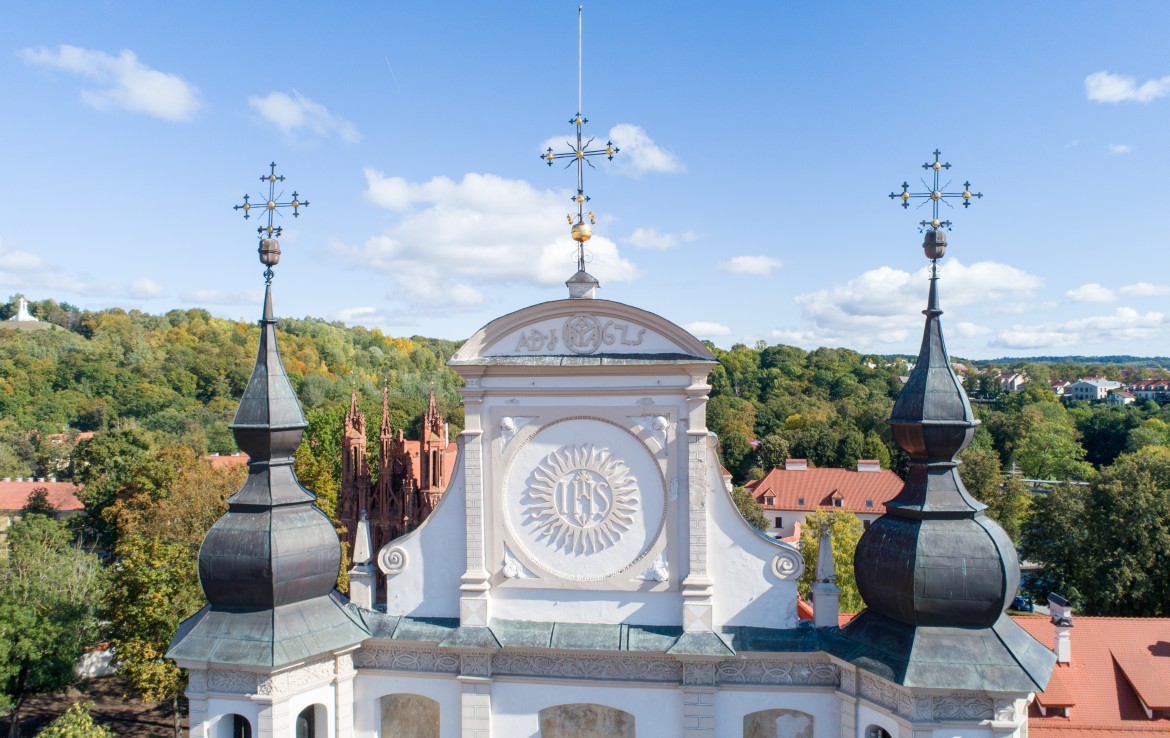 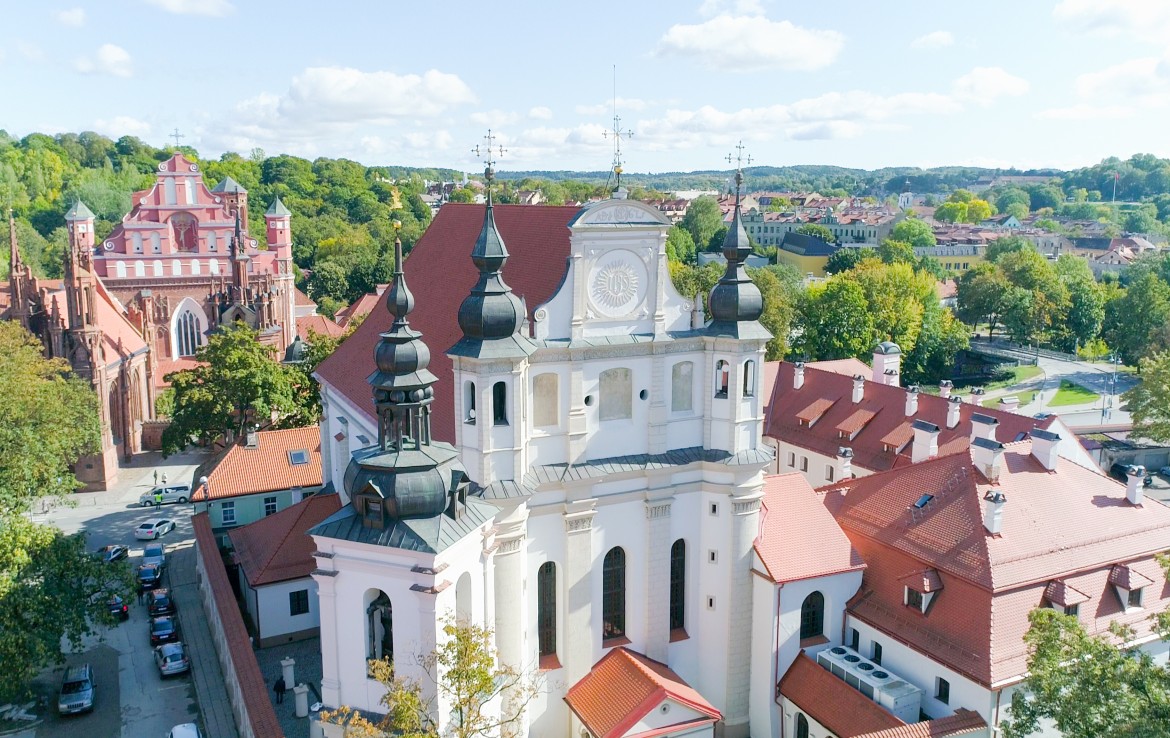 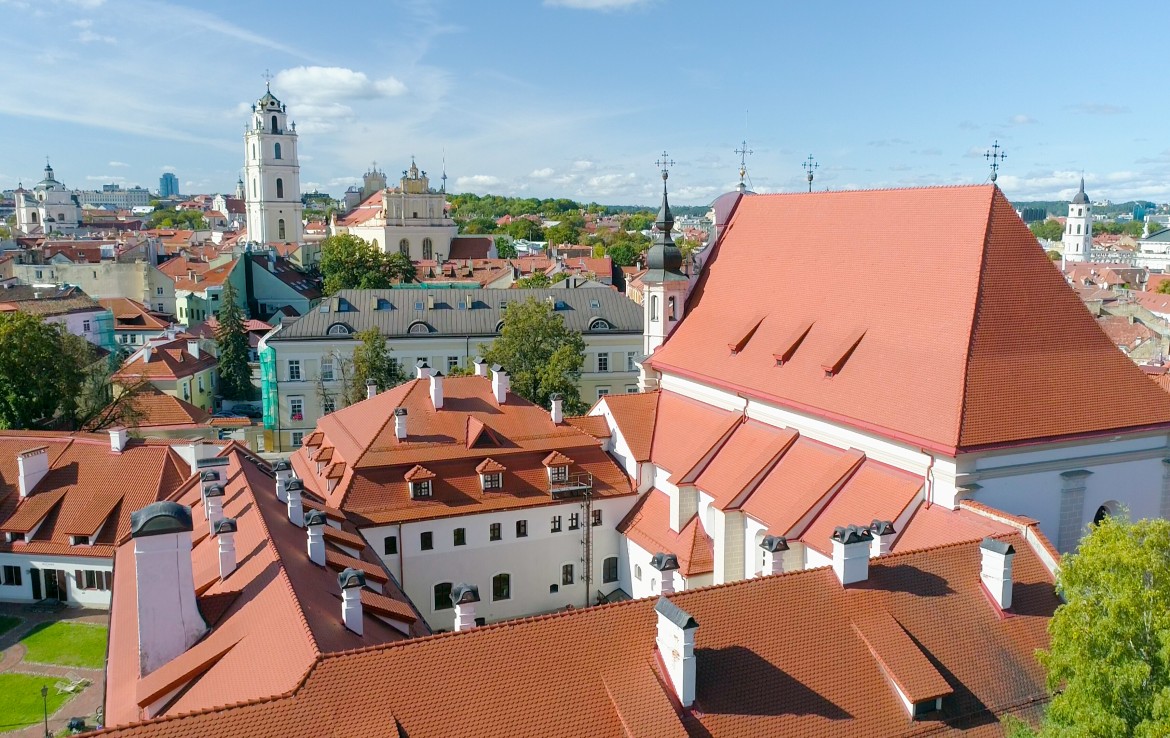 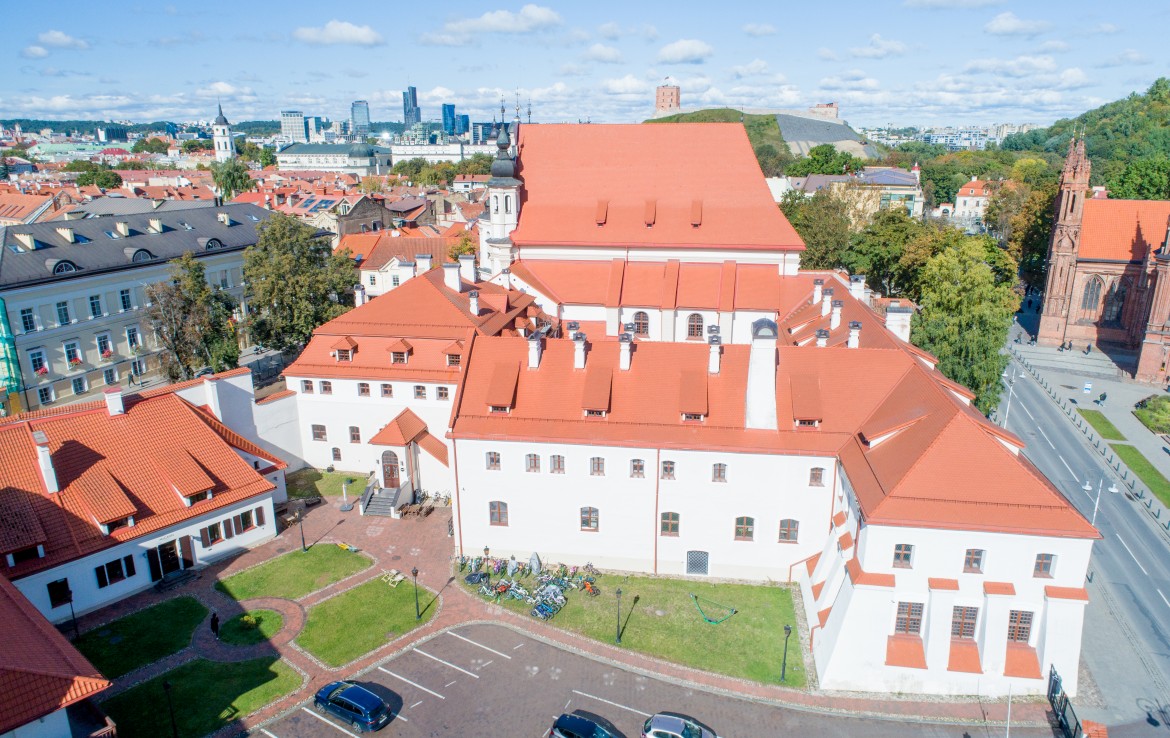 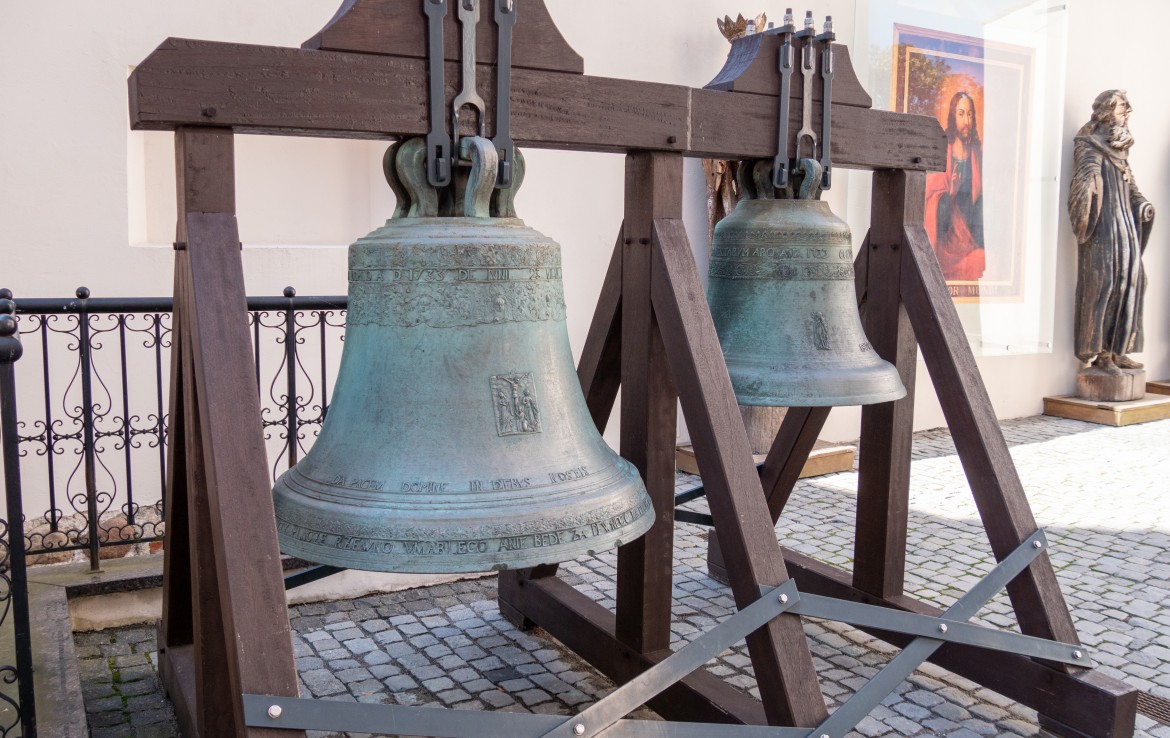 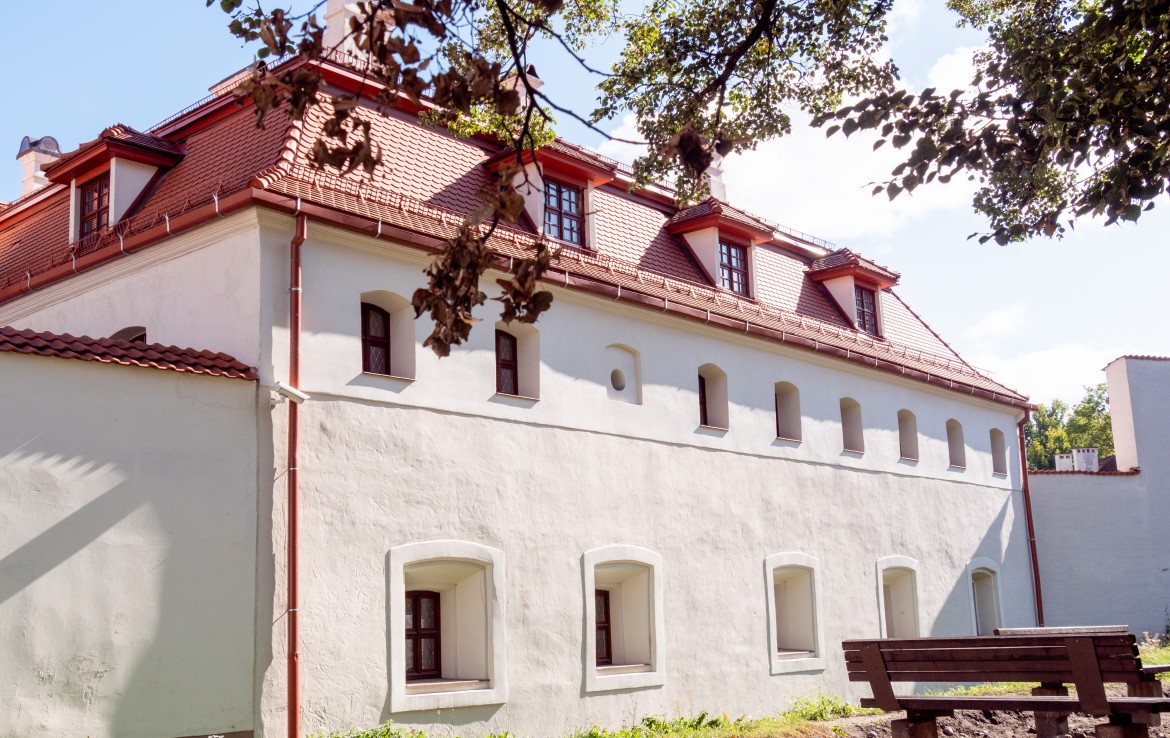 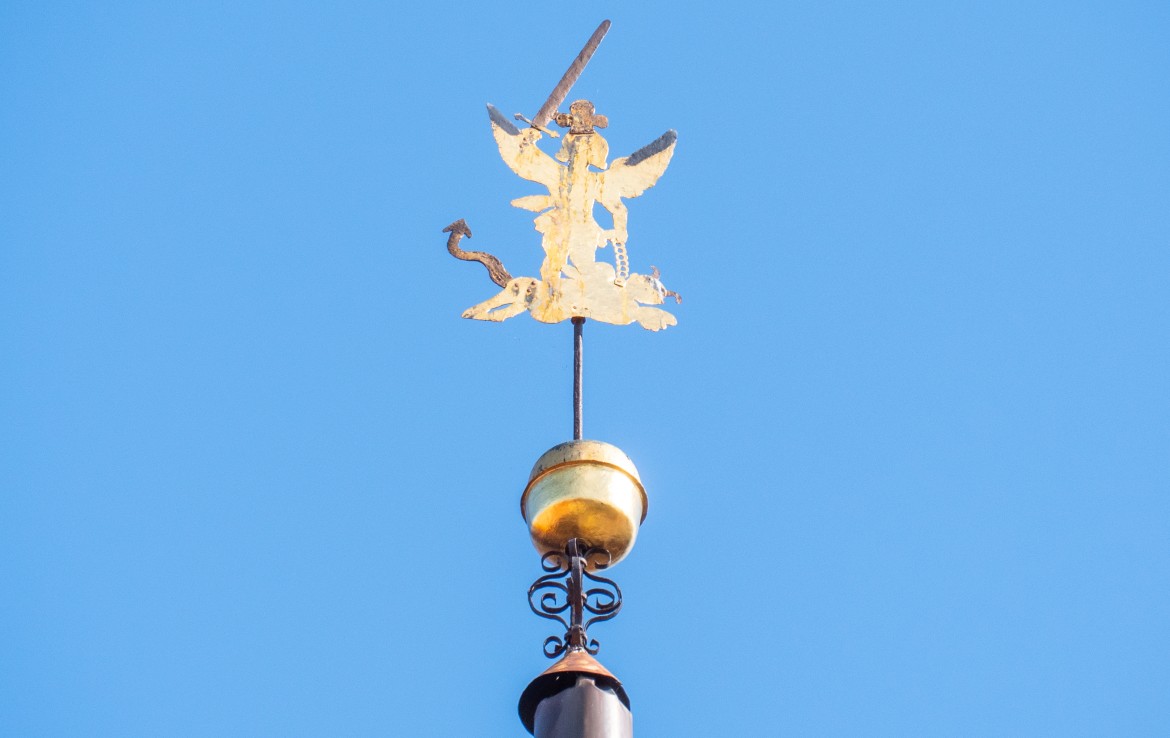 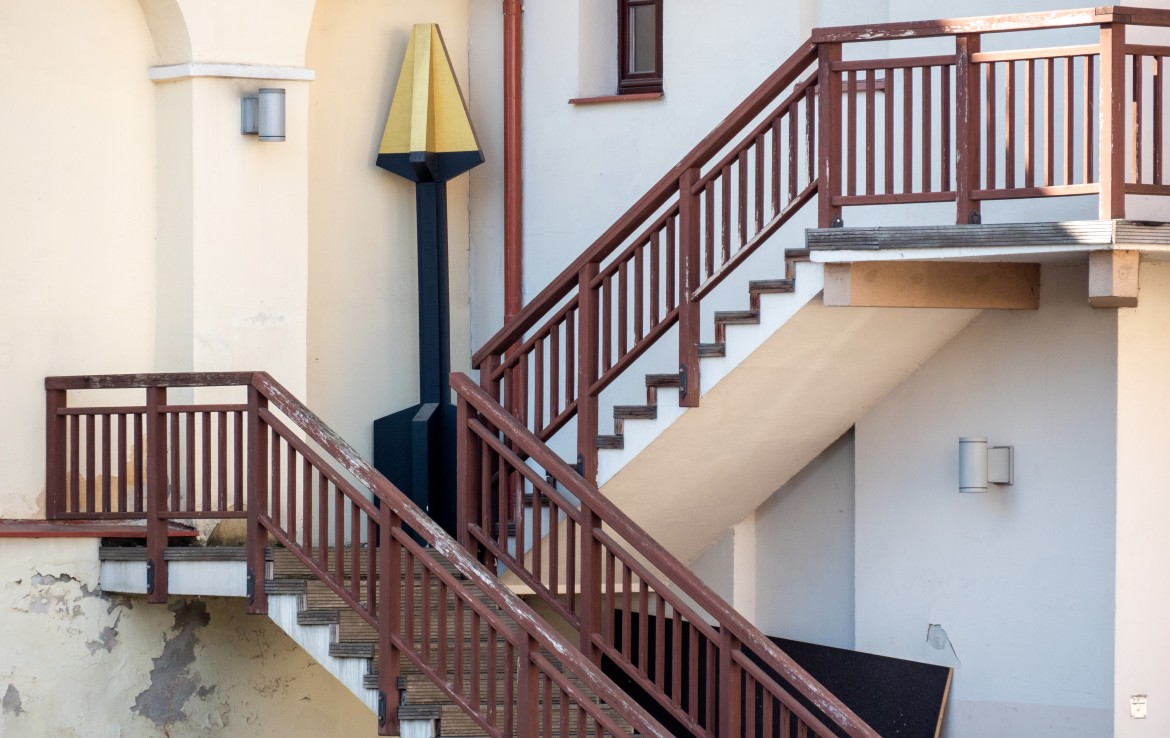 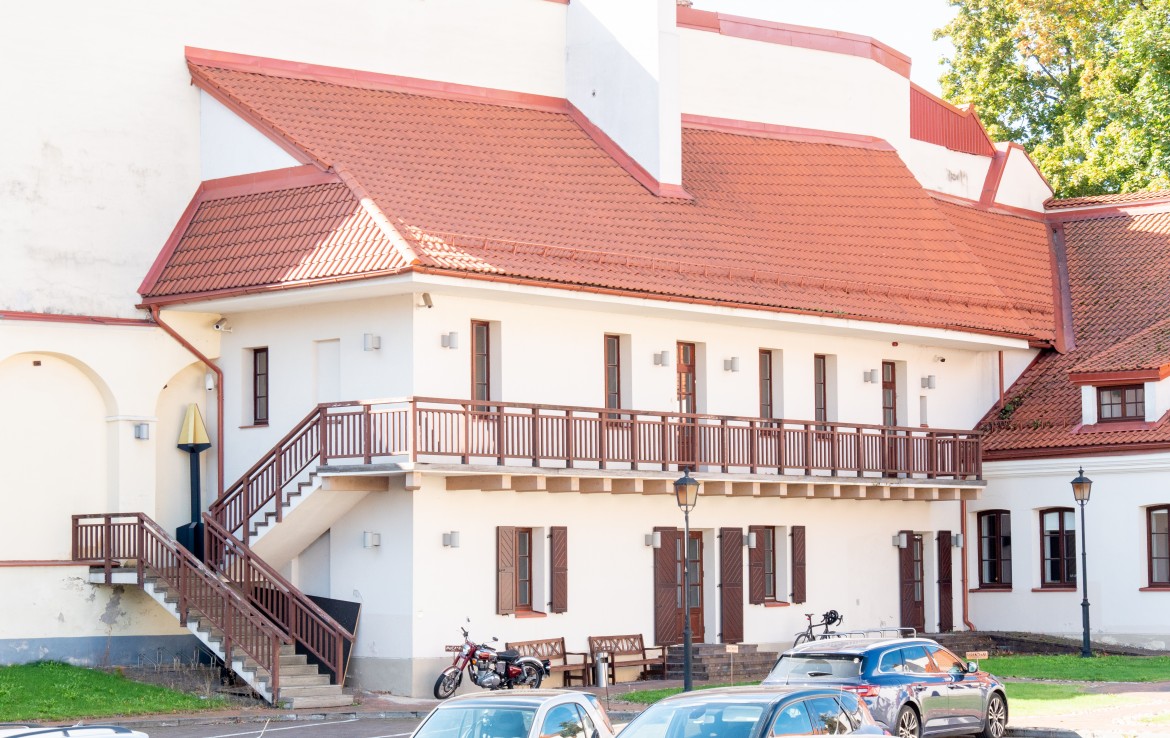 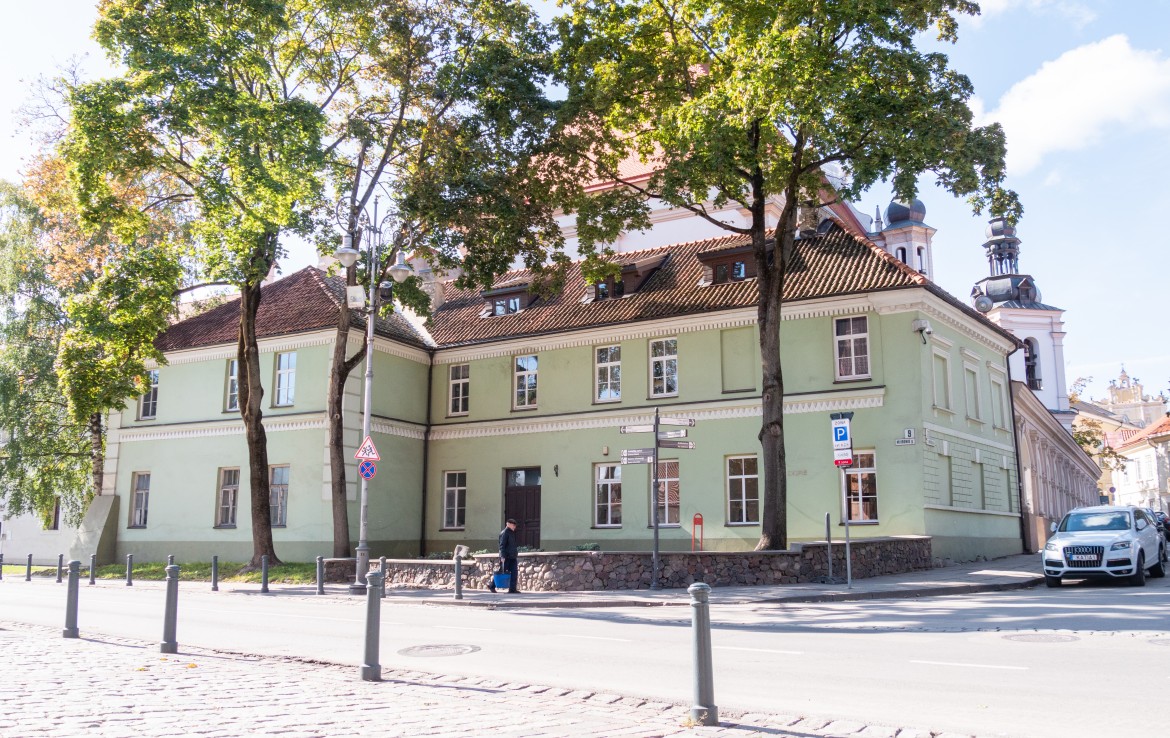 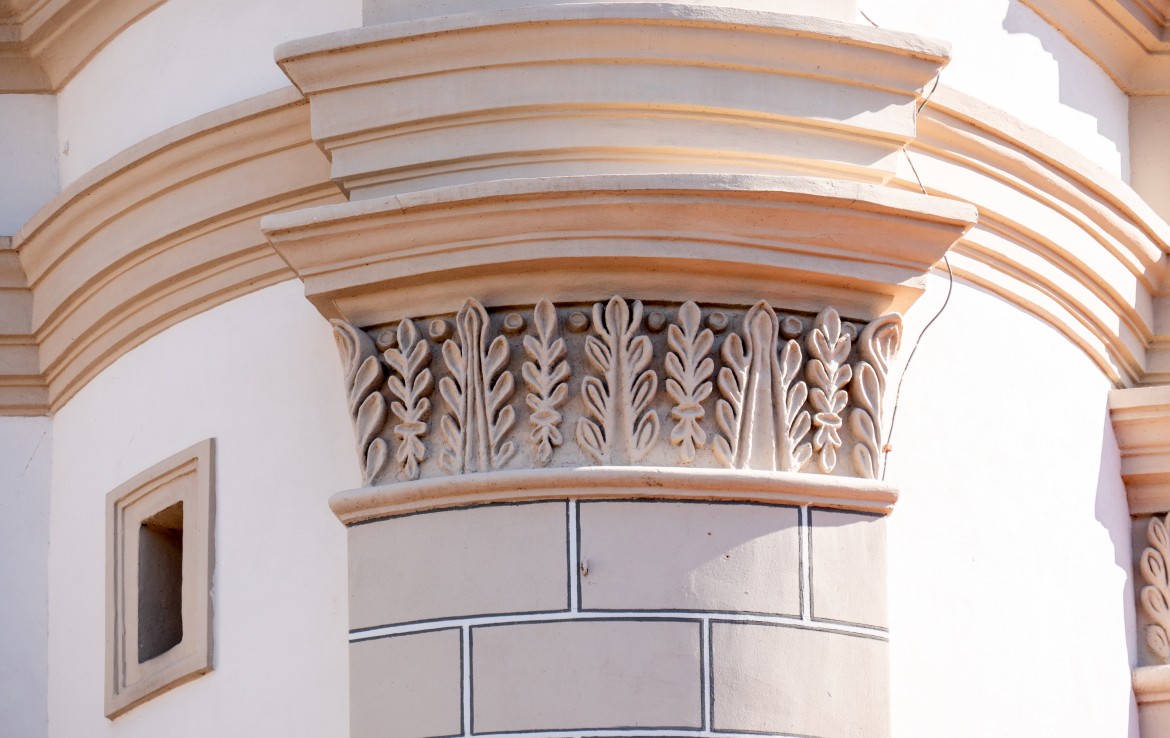 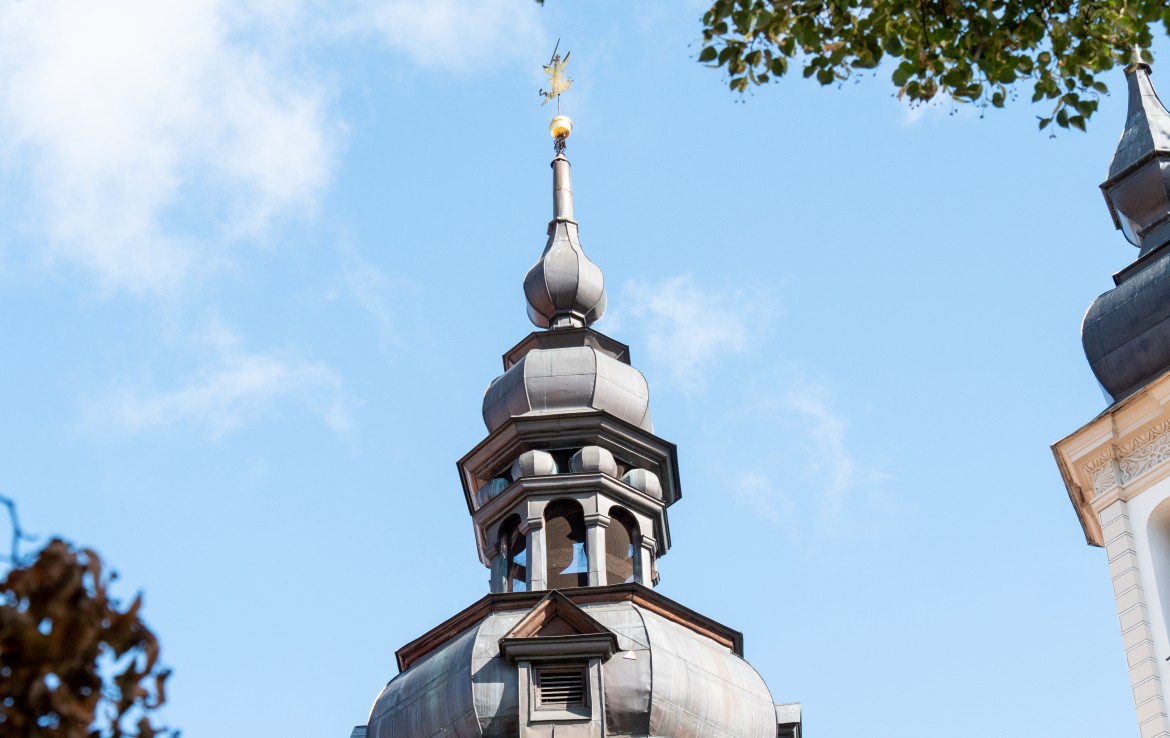 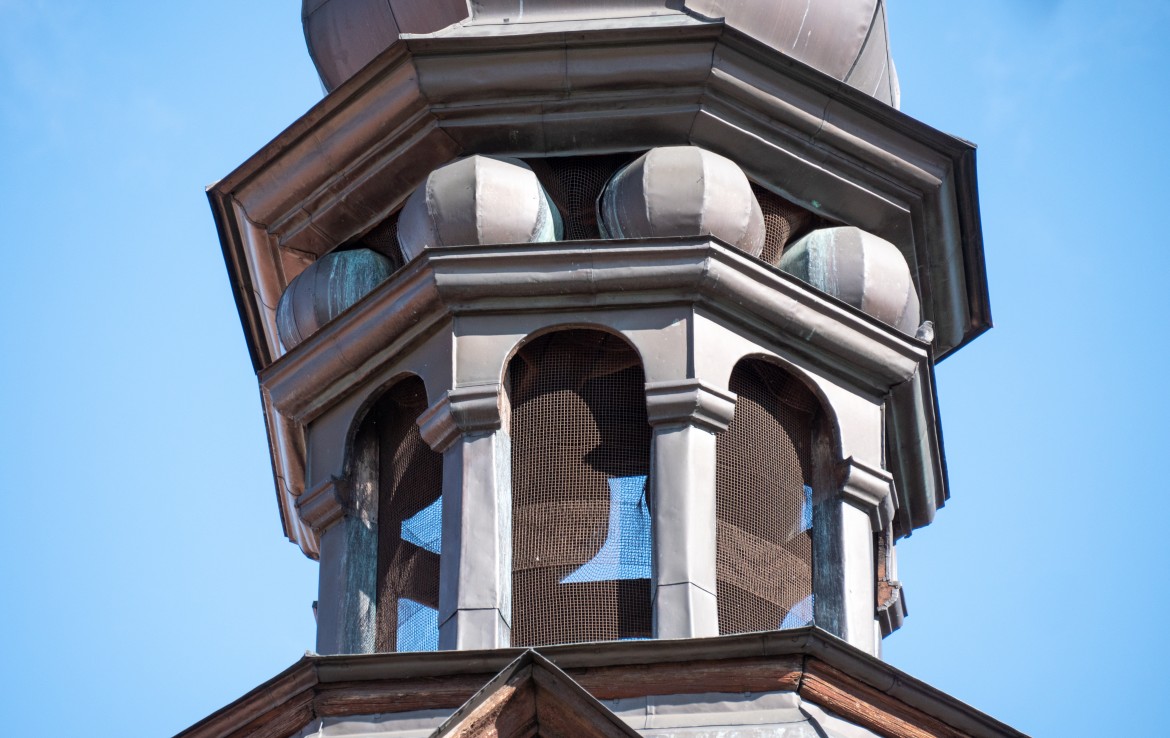 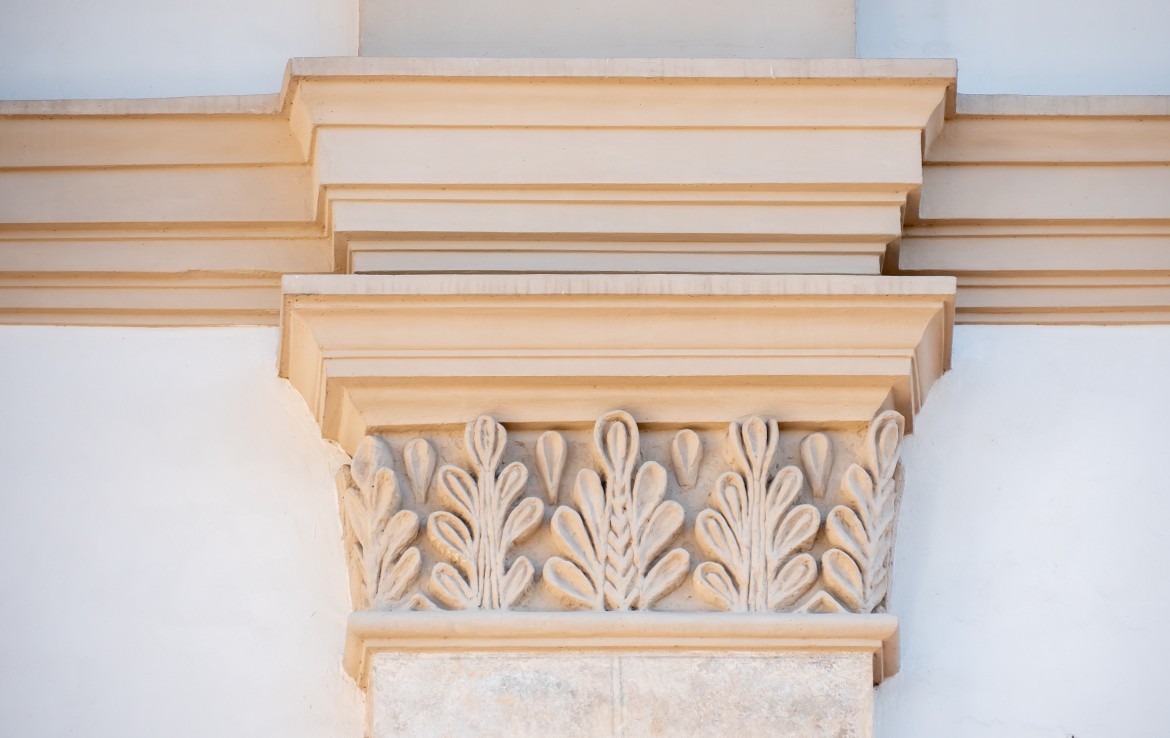 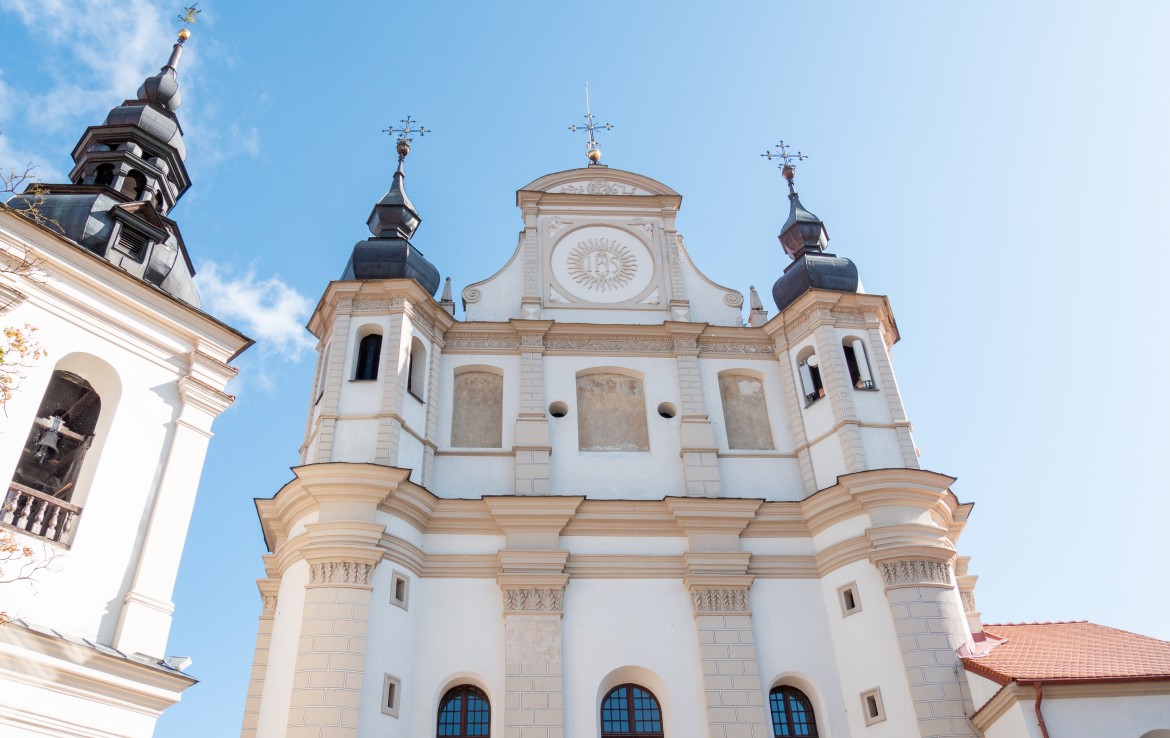 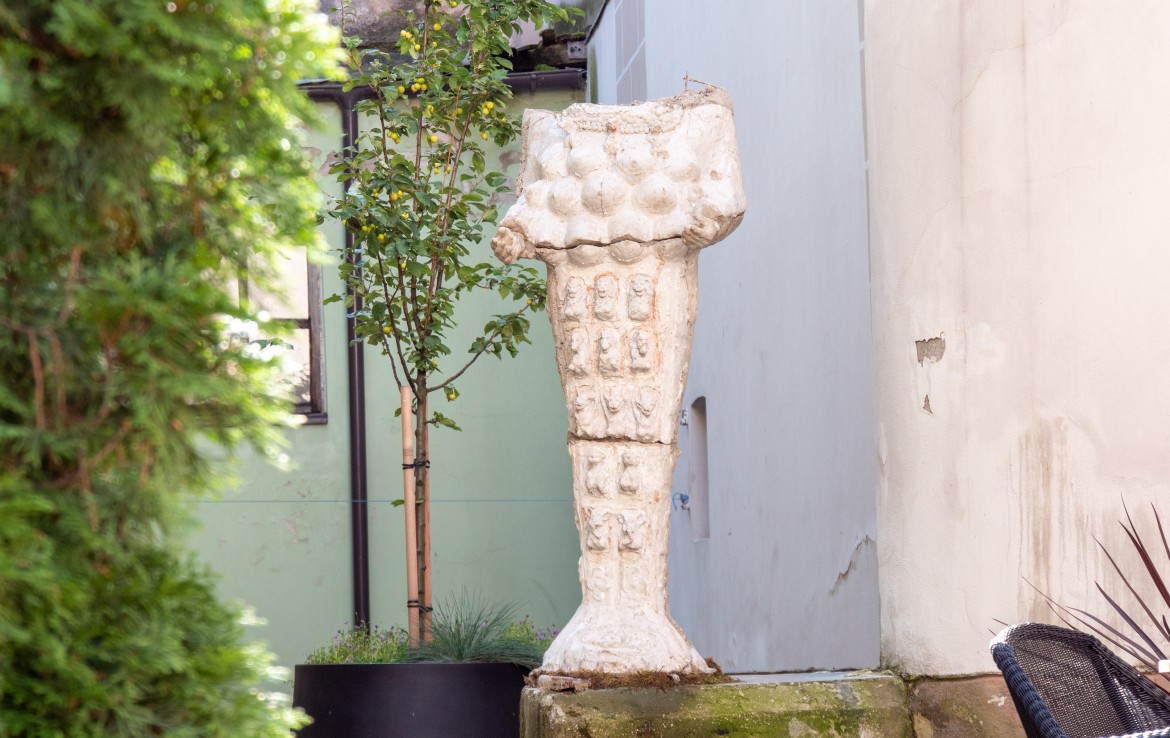 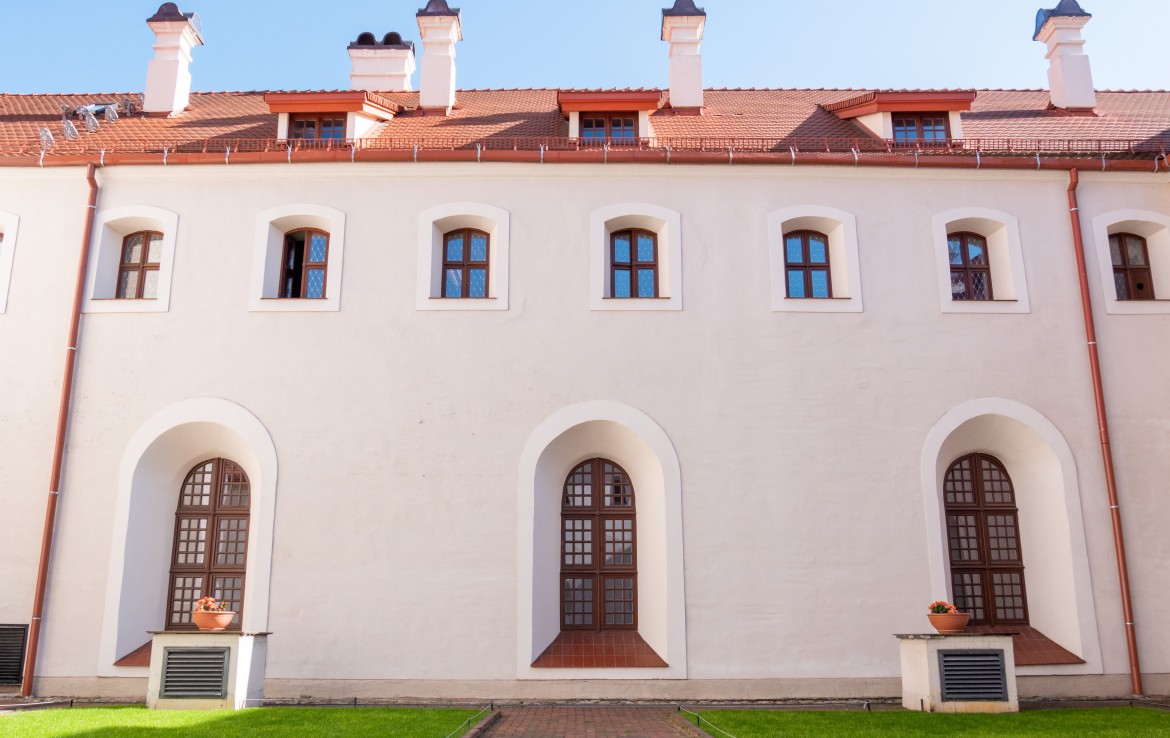 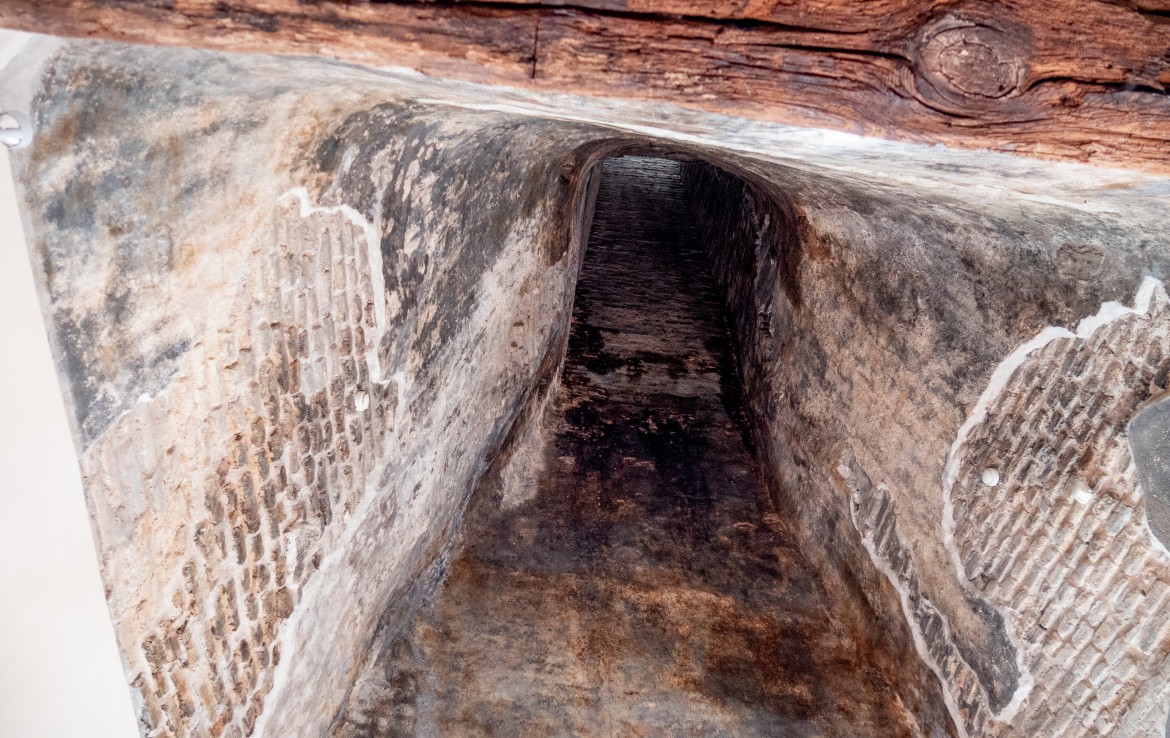 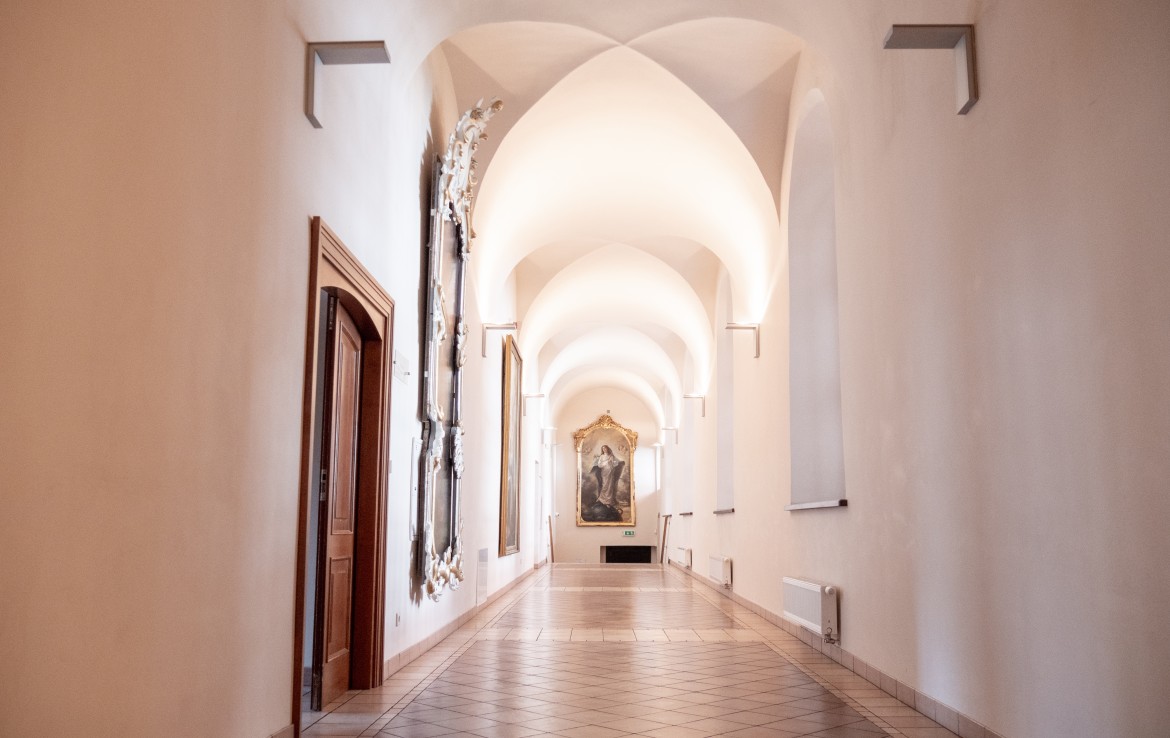 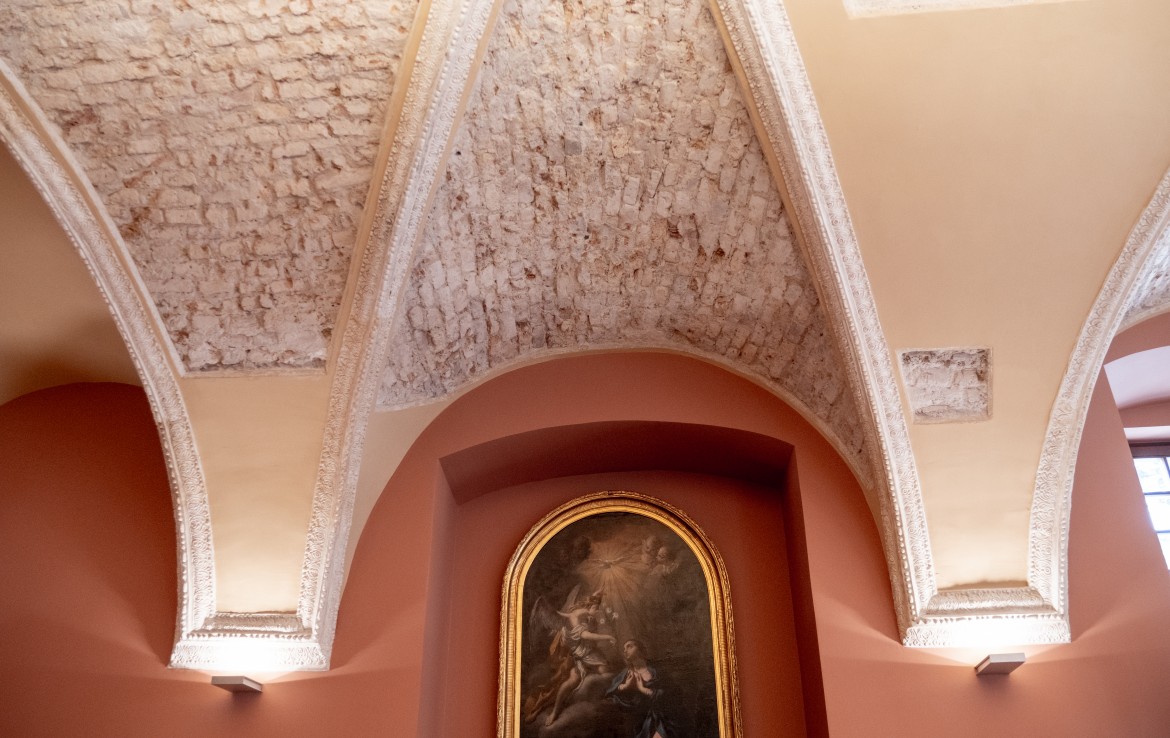