One of the most important buildings in the modern Republic of Lithuania has a long and rich history behind it. In the middle of the 16th century the Bishop of Vilnius moved to the Gothic palace located here, later on a priest seminary was established in the nearby building. The buildings have undergone more than one reconstruction and restoration in the aftermath of wars and fires along with subsequent changes in their appearance: one of the reconstruction projects was prepared by Laurynas Gucevičius as well. During the Tsarist Period the edifice served as an official residence where the most prominent figures and guests of the Empire used to stay and some time later the building was reconstructed again. The building was shaped into the edifice we see today during the 1820s when it was reconstructed according to the project developed by Vasiliy Stasov from St. Petersburg: the Office of the Governor General was established here, thus it became the administrative centre of Vilnius Governorate. As one of the largest palaces in the centre of Vilnius, the building had a significant role at all times: during the Interwar Period the Polish Government used it for representational purposes, after the war it served the needs of the military officers of the Soviet army, and later on, during the Soviet Period, it was used for establishment of the so-called Artists’ Palace. Since 1997 it has become the official residence of the President of the Independent Republic of Lithuania.

The local version of the so-called Empire style, i.e., the Late Classicism, and its forms, which spread from France, still prevailed in Russia in the end of the 1810s, when the project for reconstruction of the ensemble was being developed. The Empire style as well as the local styles affected by it became a favoured element in the field of the “government” architecture: classicist monumentality, pathos-infused décor, and the prevailing pomp were particularly suitable for showing the power of the state and perpetuation of the ideologies sought by it. Thus, the architecture of the Palace of the Office of the Governor General of Vilnius was primarily a representation of the Russian version of the Empire style designed by the architect, who also developed drawings for the Triumphal Arches in St. Petersburg and Moscow.

The first thing that catches the eye, when looking at the edifice from the side of the current S. Daukantas Square, is the strict façade symmetry, which is typical to Classicism. Even though there are no relief compositions and ornamentation characteristic to the Empire style, which prevailed in Russia, yet the dense segmentation of the central avant-corps, the colonnades on the ground floor connecting the latter to the side avant-corps as well as the peculiar composition of semicircular and rectangular window arches, rounded niches above the windows, and triangular cornices could be seen in many buildings of this style. The choice of the rectangular central avant-corps surrounded by the side avant-corps with the triangular pediments above them ripples across the courtyard façade as well. However, here the symmetry of the façade is disrupted by the slightly turned and slightly longer southeastern corps, which probably resulted from a miscalculation of the square measurements within the course of the construction of the Palace causing it to stick out to Universiteto Street and leading to demolition of the buildings located there. A monumental entrance extension leans on this part of the building on the courtyard side with a portal arranged across two floors. The colonnade of the central avant-corps of the rear façade was moved to the first floor: this solution is also characteristic to the Empire style along with the typical example of this décor, i.e., the motif of the crown of victory, which completes the side attic walls.

Very few authentic interior elements on the ground floor remained to this day and only on some of the premises: ceiling moulding of the Empire style could still be seen in one of the halls. Within the course of making adjustments in order to adapt the edifice for the purposes of the Presidential Palace, it was decided to equip the damaged premises on the ground floor to match the prevailing style of the Palace, thus respectively choosing proper materials and solutions. Restoration of some of the premises in the Palace was guided by detailed research. Most of the elements typical to the Late Classicism in general and the Empire style should be looked for on the first floor of the Palace. The ornamented, gilded stair railing in the main staircase as well as the relief décor on the walls and ceilings in the so called blue hall, green hall, and the main white hall withstood the test of time. It is no coincidence that the former main hall of the Bishops’ Palace is nowadays referred to as the coffer hall: this is where we can see an impressive coffer ceiling.

Most of the ensemble territory is taken up by the park, the main courtyard, and several smaller courtyards. The horseshoe-shaped courtyard is surrounded by the fence or the buildings on all sides. On the western side it separated from the park by the colonnade of the Doric order with a massive entablature and attic connecting it at the top. The colonnade on both ends is completed with two gates: one of them leads to the administrative courtyard and the other one leads to the park. The cornice of the colonnade continues on the gate dividing it into two sections and terminating only at the tall entrance arches, while the top cornice continues the one dividing the floors of the great Palace. Here we can see the motif of crowns reflecting the one seen on the façade of the Palace. The colonnade incorporating an identical solution separates the smaller courtyard from the front courtyard on the eastern side, but the first floor has been built above the northern gate leading from the Palace to other buildings of the complex. The massive fence surrounding the park is highlighted by semi-circular niches with profiled architraves incorporated into the planes completed with key-shaped mouldings at the top, while the parts of the posts sticking out the fence are decorated with crown mouldings. There is a small but monumental guard, or corps de garde, building made up of three blocks joined by a curved wall on the other side of the Palace across the front square. The most expressive of them is the central single-floor building where we can see a triangular pediment with the crown motif on the tympanum supported by eight Doric columns. 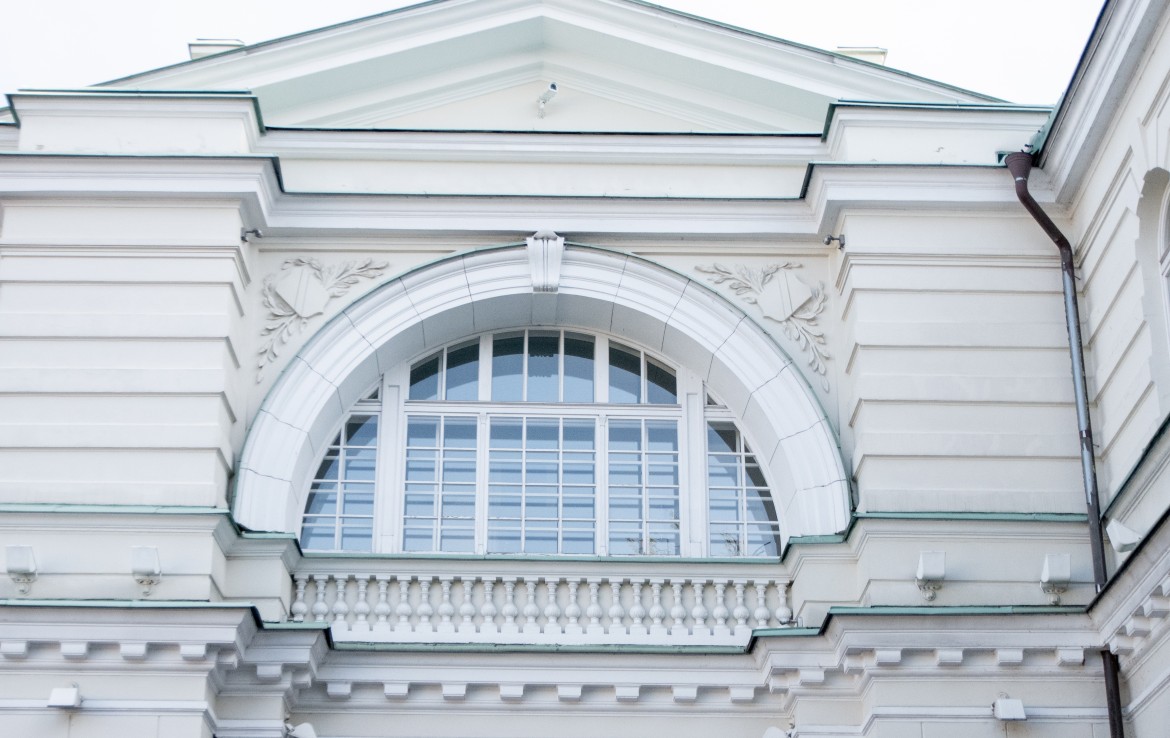 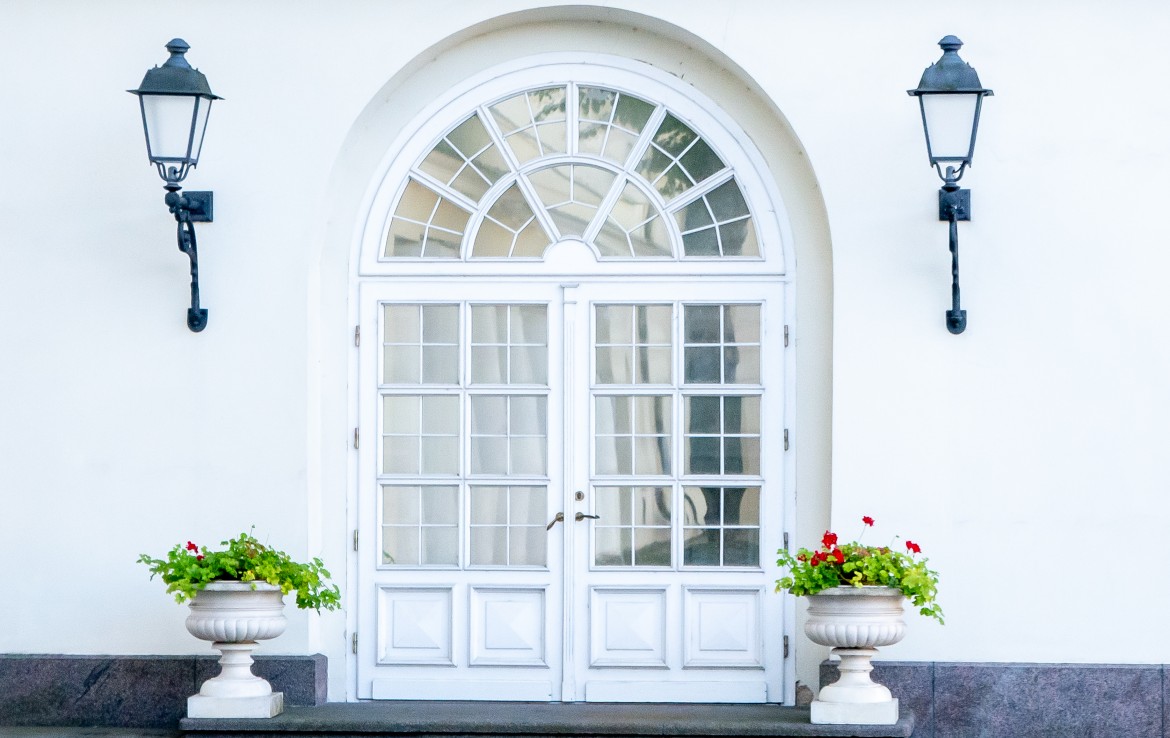 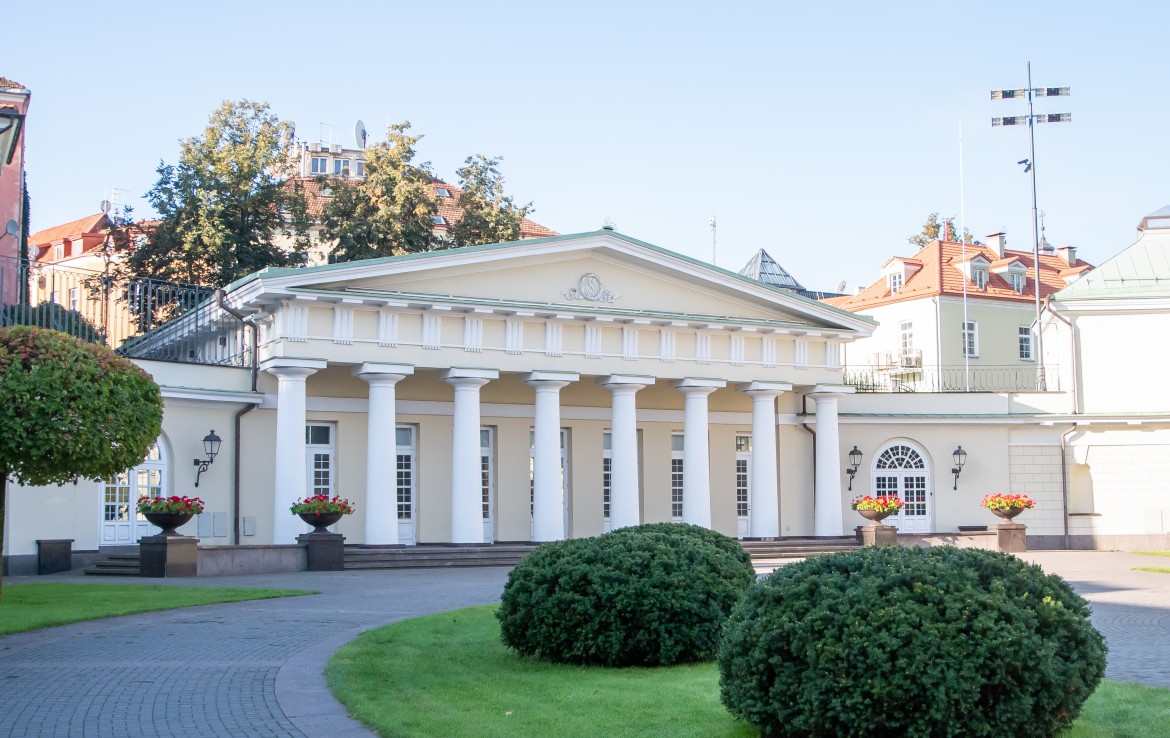 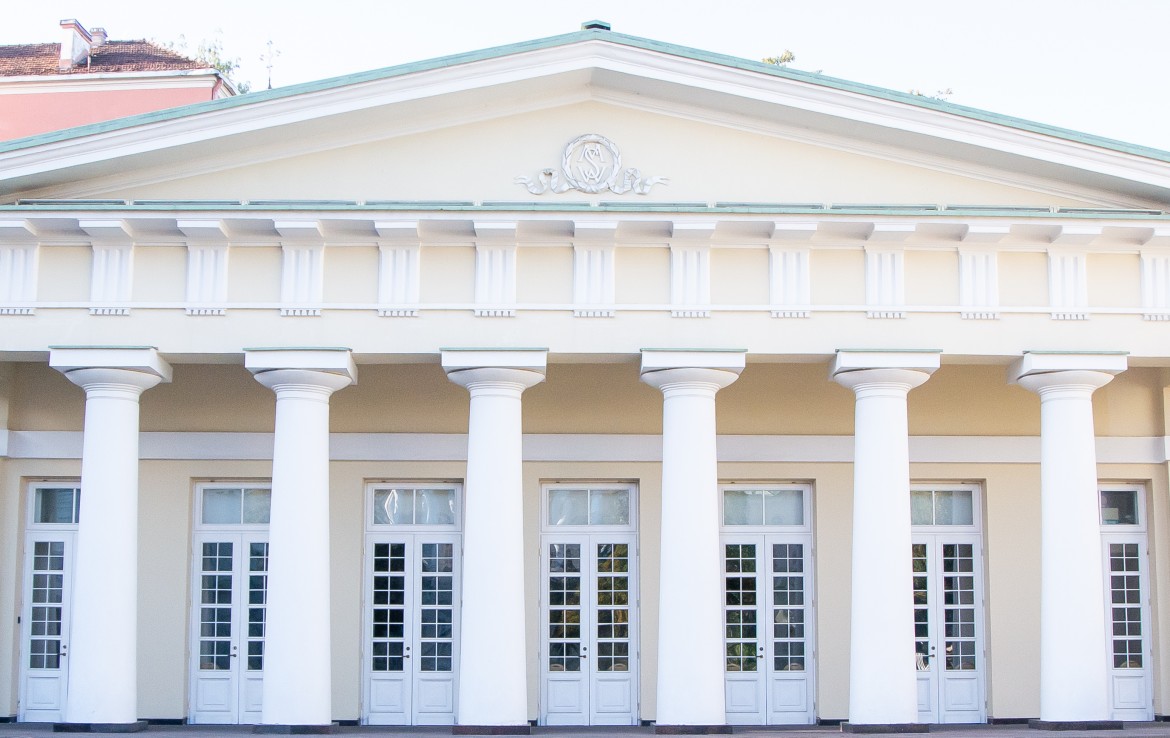 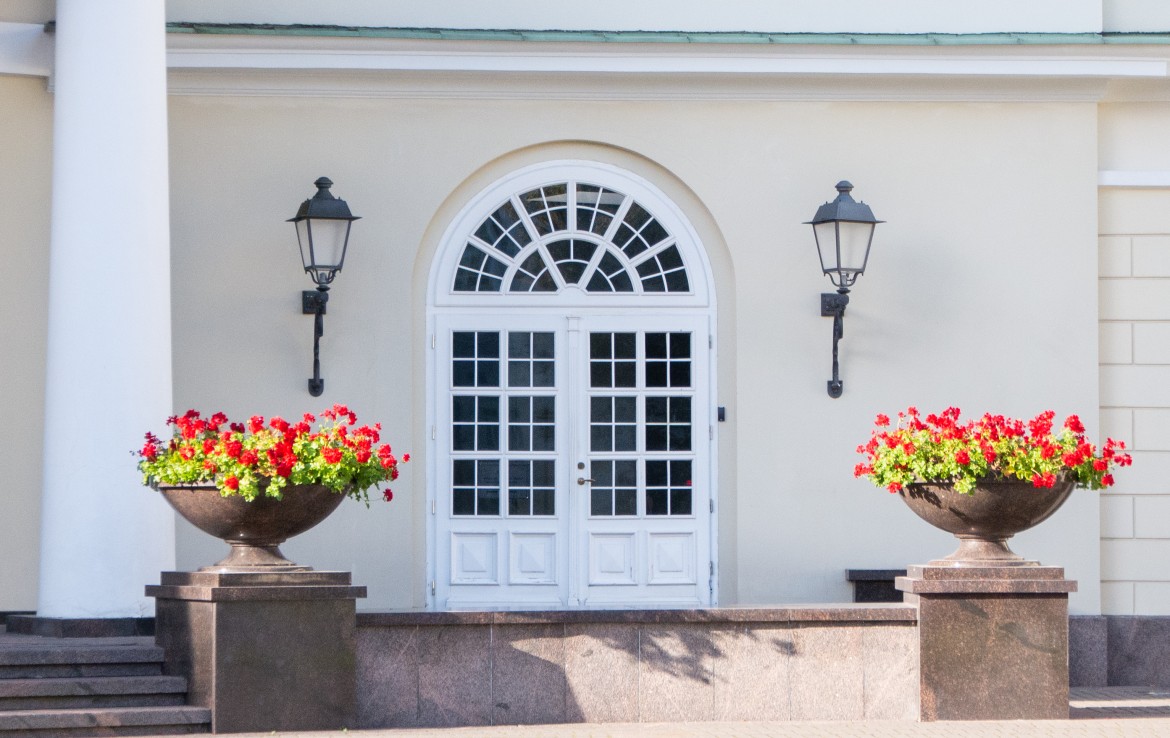 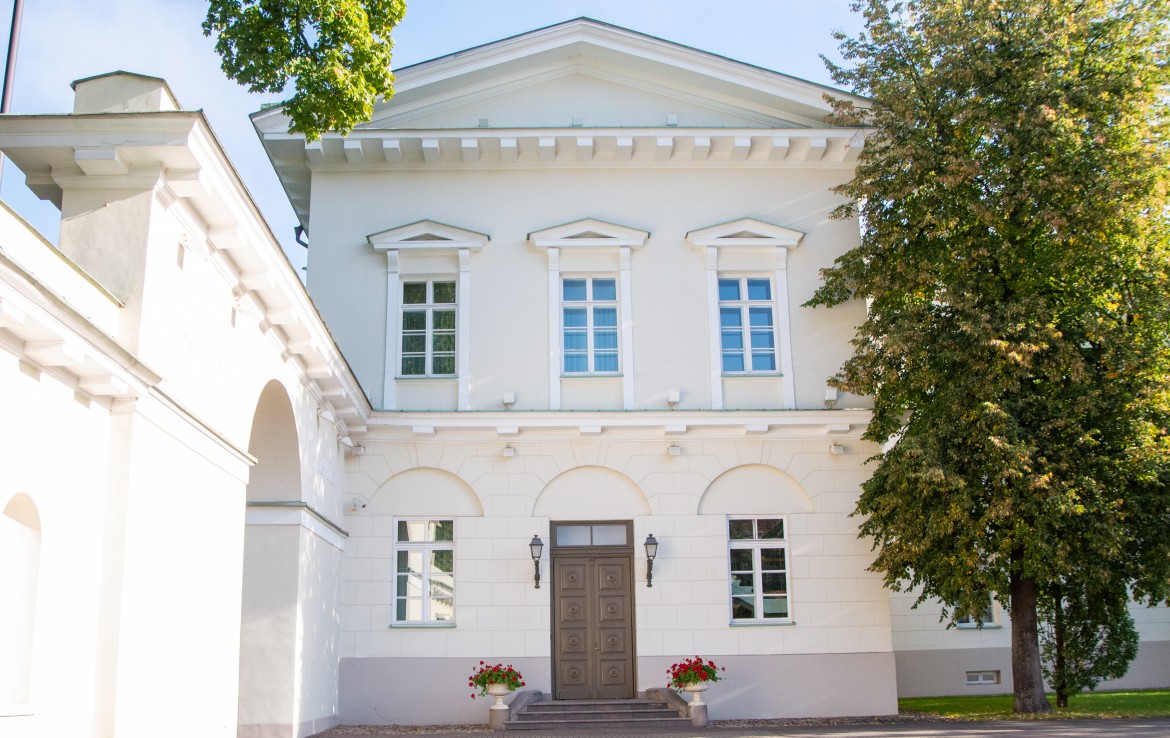 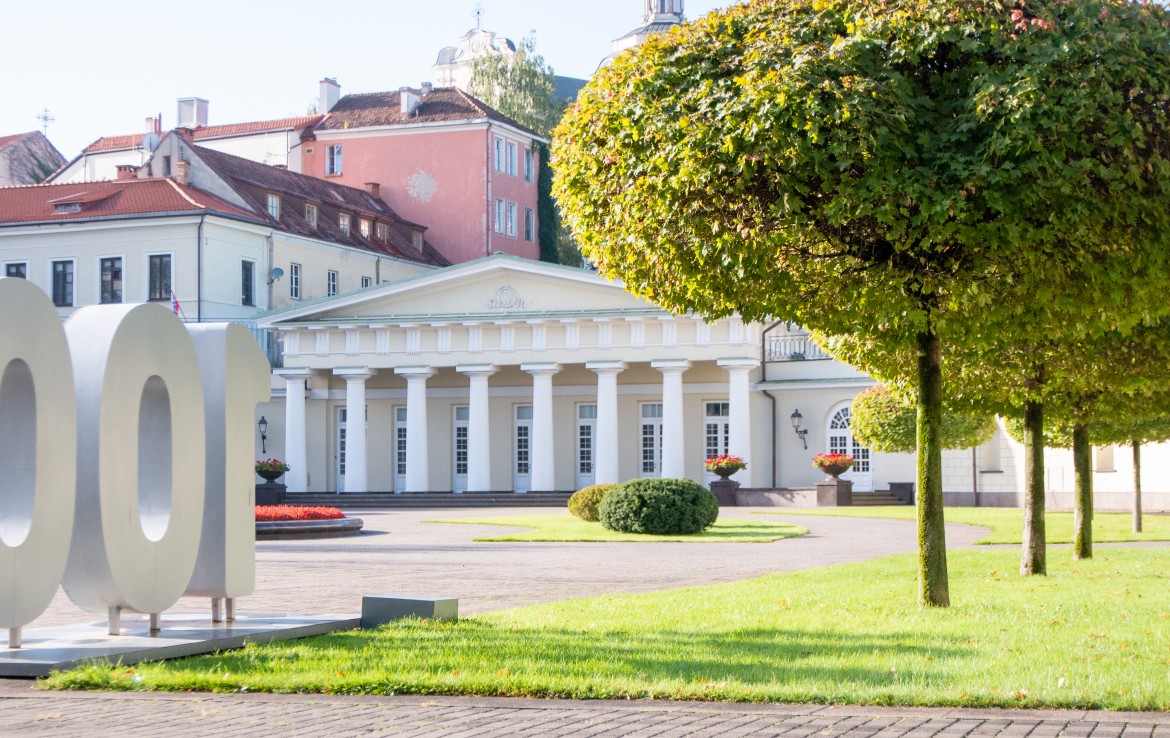 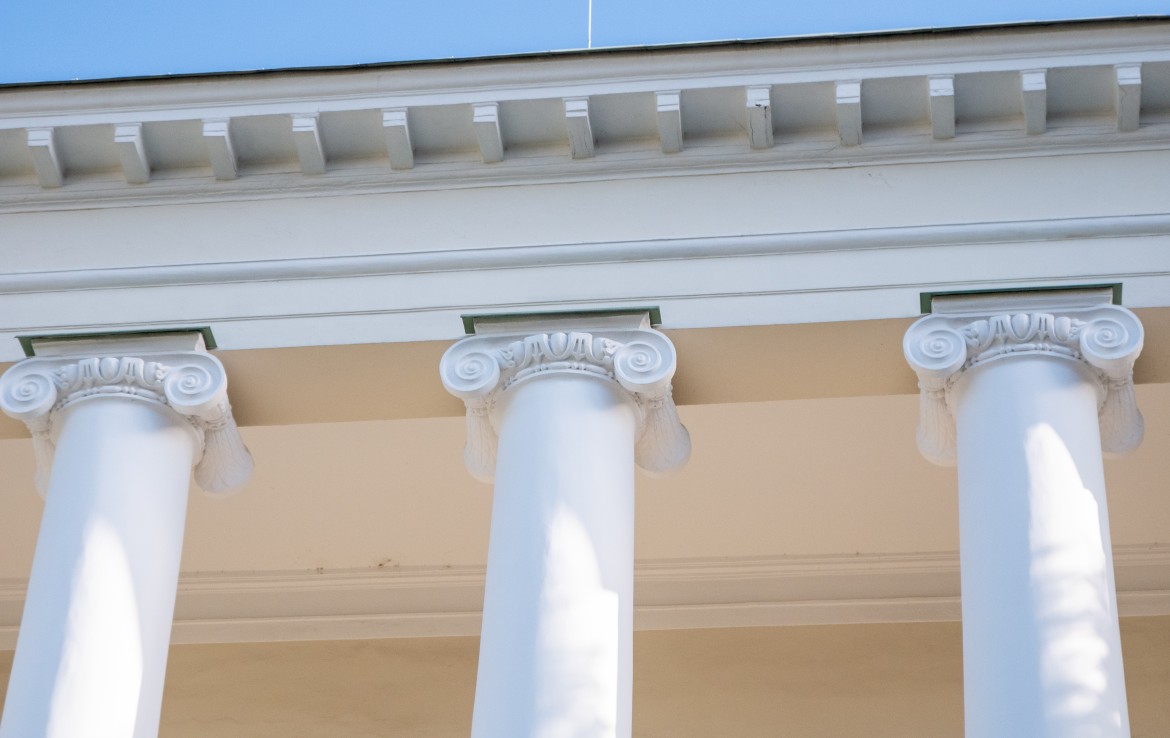 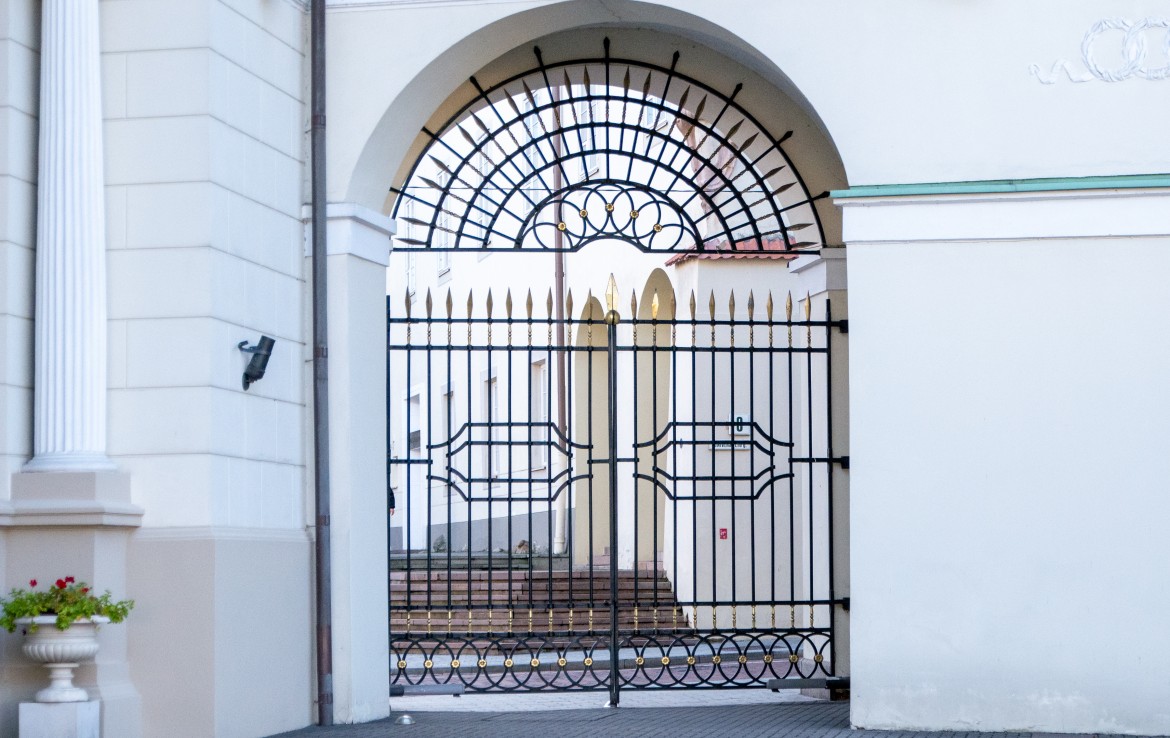 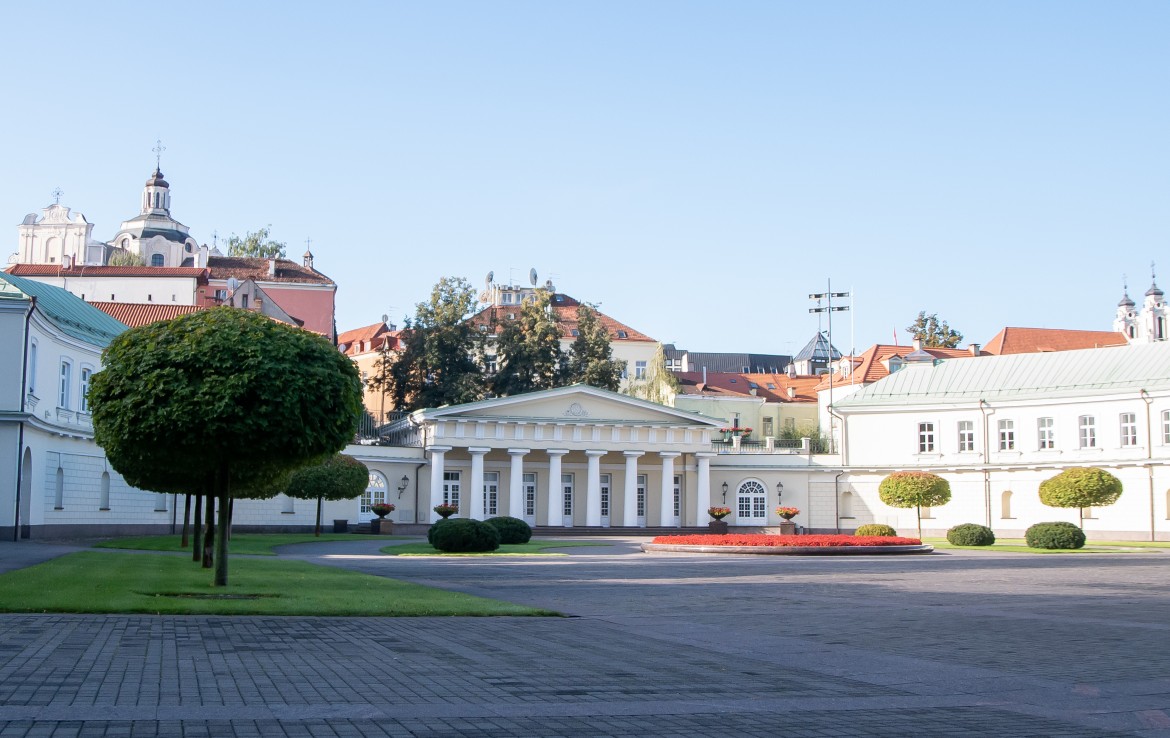 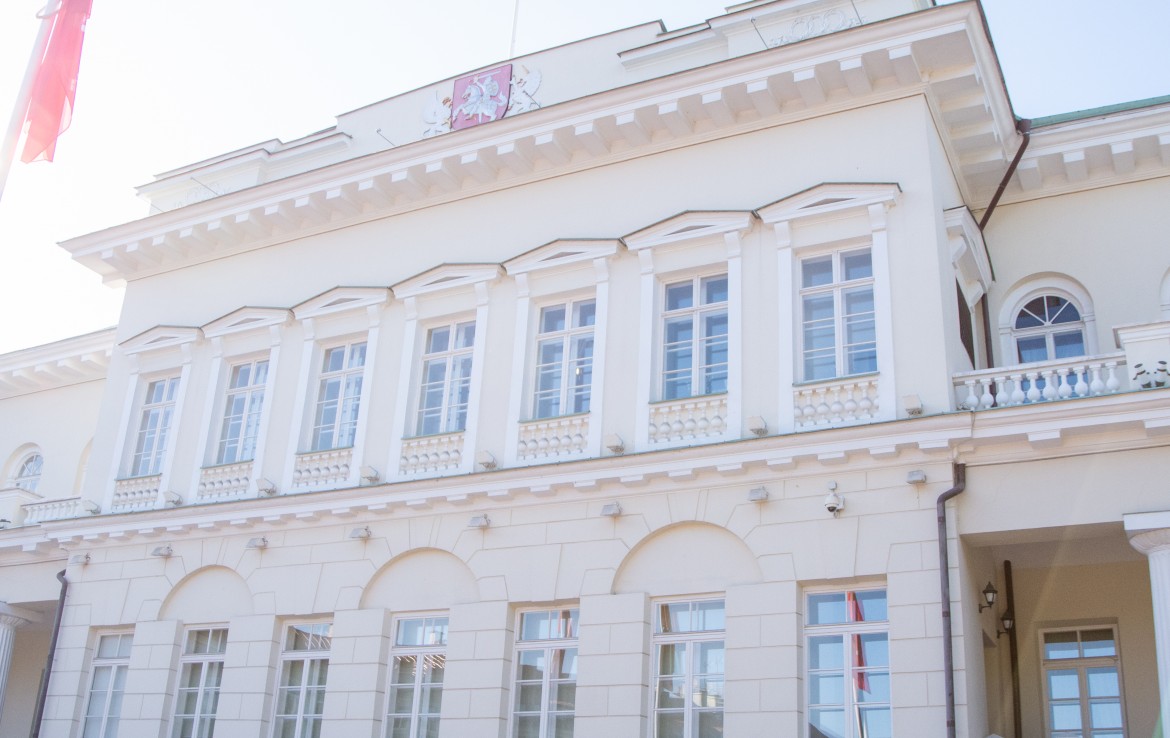 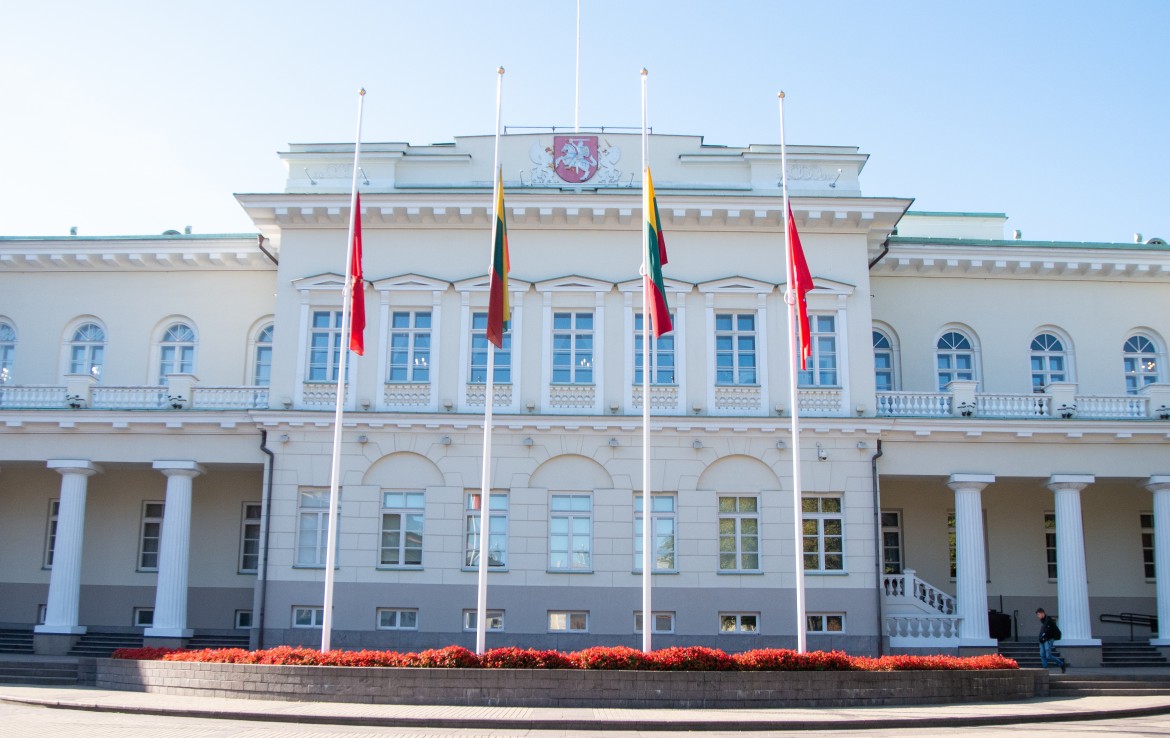 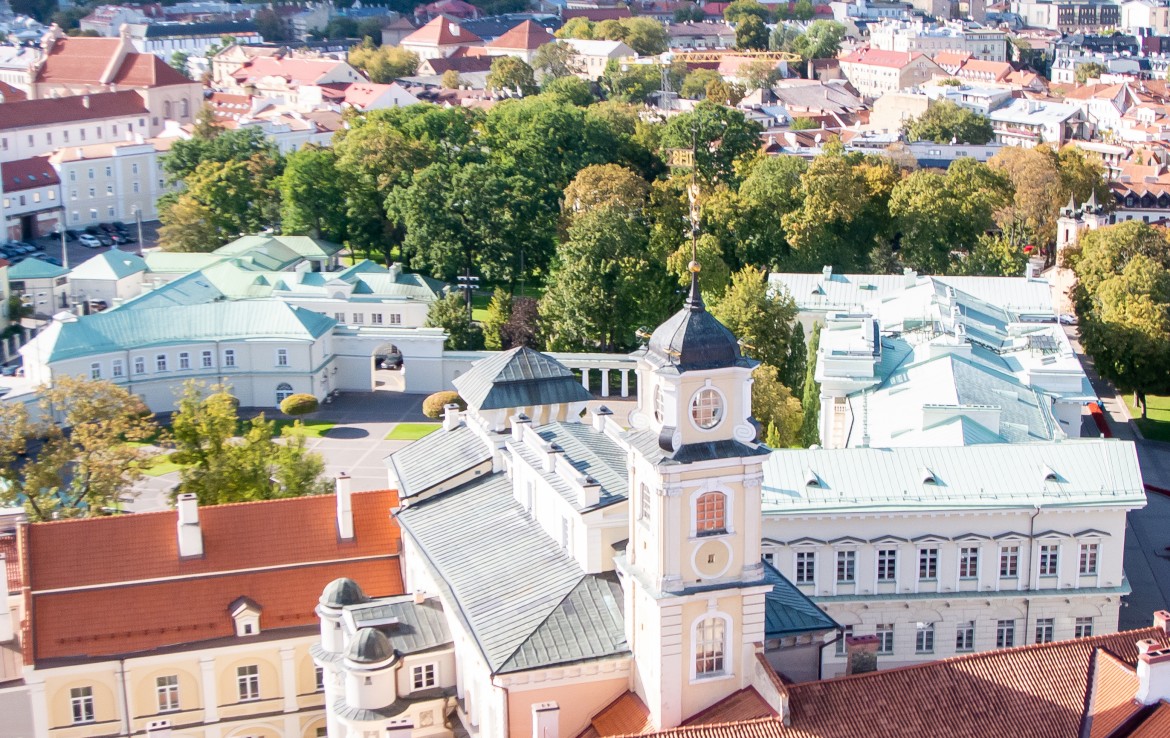 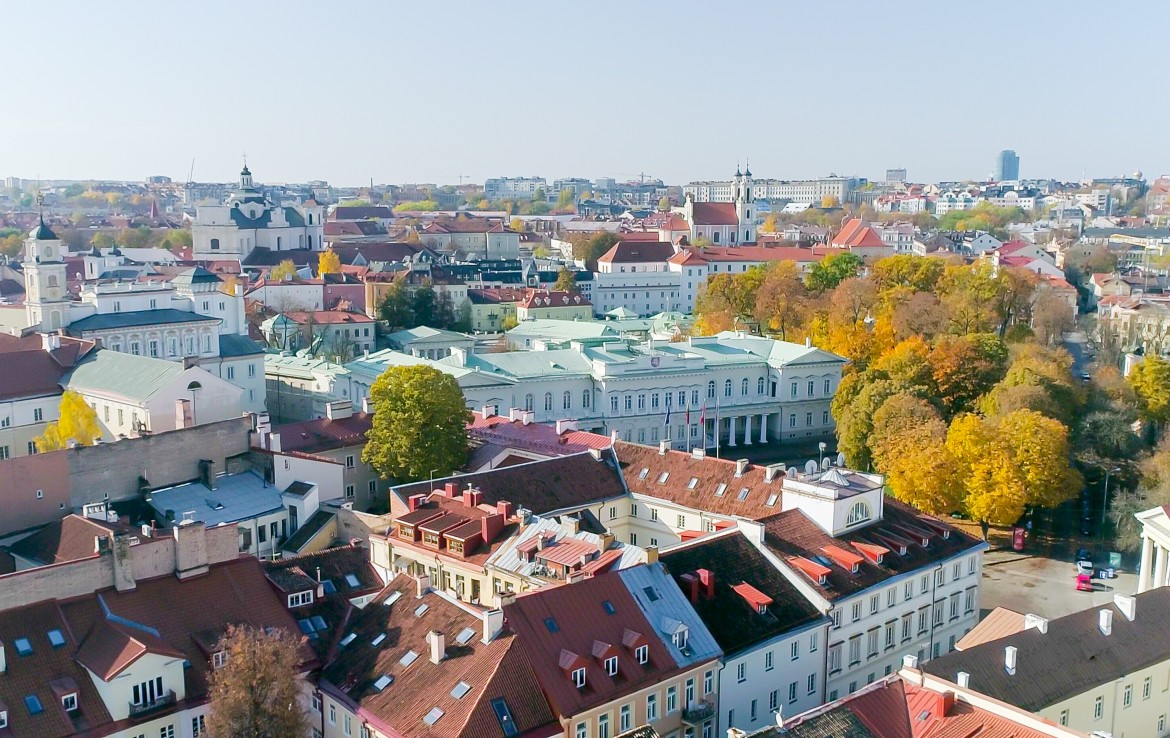 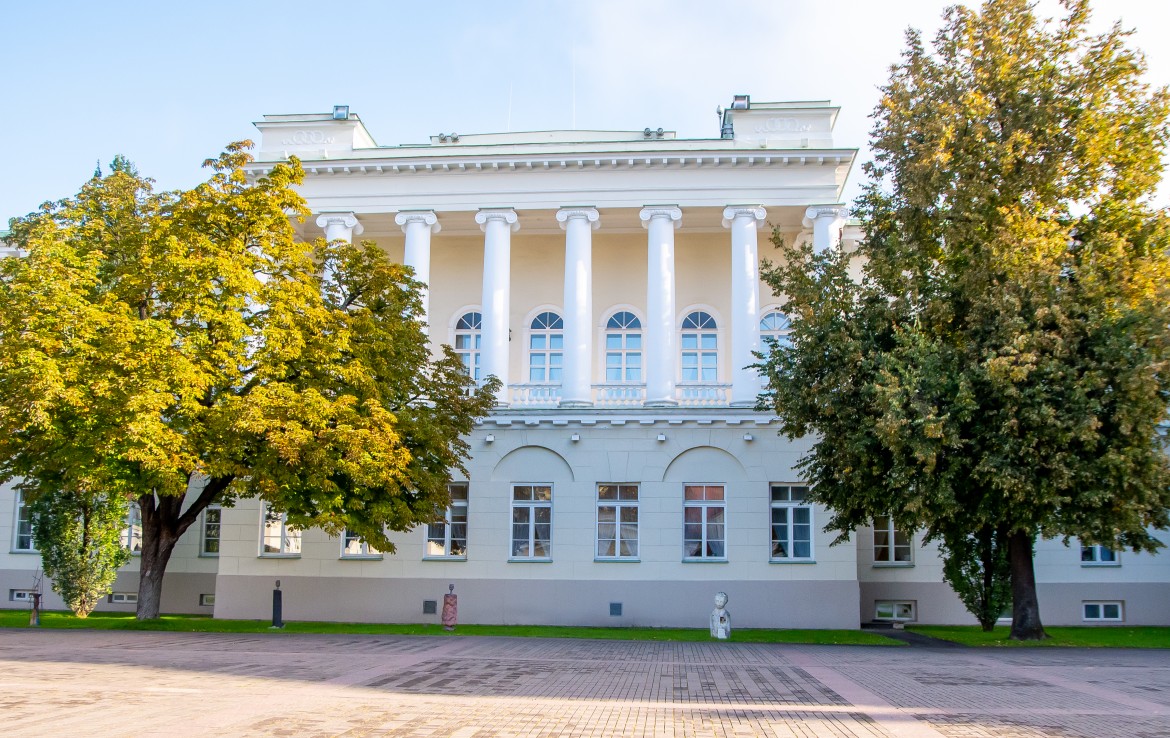