The Dominican Church of the Apostles St. Philip and St. Jacob began to rise in 1690 and became the dominant figure in Lukiškės suburb of scattered low buildings. Years went by and the city started expanding towards this direction, surrounding the church with multi-storey buildings of Naujamiestis. Yet this church remains one of the major landmarks of this part of Vilnius centre to this day. Because of the long construction, which took place in stages, the Baroque details of the church belong to different periods, featuring intertwining features of both the early and late characteristics of the style. While the lower sections of the belfries and the pediment were built already in 1718, the two upper sections were completed only in the middle of the century. Their tapering shapes, diagonal corners and graceful helmets feature the shapes of what we call ‘the baroque of Vilnius’. The composition of the lower part of the façade is massive, with a particularly notable very high first section, surrounded by a square plan and lower sections of the belfries. On top of it, situated between the belfries, is the two-section pediment, the high lower part of which is connected with the triangular top with volutes, characteristic to all periods of Baroque.

Probably the most impressive aspect of this church is its main volume – this is the highest single-nave church in our country. Compared to other double-belfry Baroque churches in this city, its height, which equals the nave length, as if visually neutralises the rather high belfries of the church. The impressive interior space is surrounded by the altar ensemble, created by the architect Joachim Herdegen and the sculptor Joseph Hedel. The original wooden Baroque pulpit survived as well. Side walls feature Corinthian pilasters, supporting a massive profiled cornice. Looking back at the entrance, we can see a wavy organ balcony, characteristic to the period. The church also has some of the original examples of painted décor –  the vault and walls of St. Hyacinth chapel at the bottom of the southern belfry features 18th century painted compositions and décor. The main space of the church also has some of the authentic décor – the pilasters feature the cross of the consecration of the church from 1794. Baroque details are also visible in the presbytery and above the organ balcony. The modest monastery building consists of three wings. The one adjacent to the church is connected to the last one with a perpendicular middle one. Here we can see the windows that are relatively small for this type of a building and what used to be a rather massive cornice – the highlight of the façade. Although the plan of the buildings changed, the size of some of the old premises inside that remained the same signify the original purpose of the building. 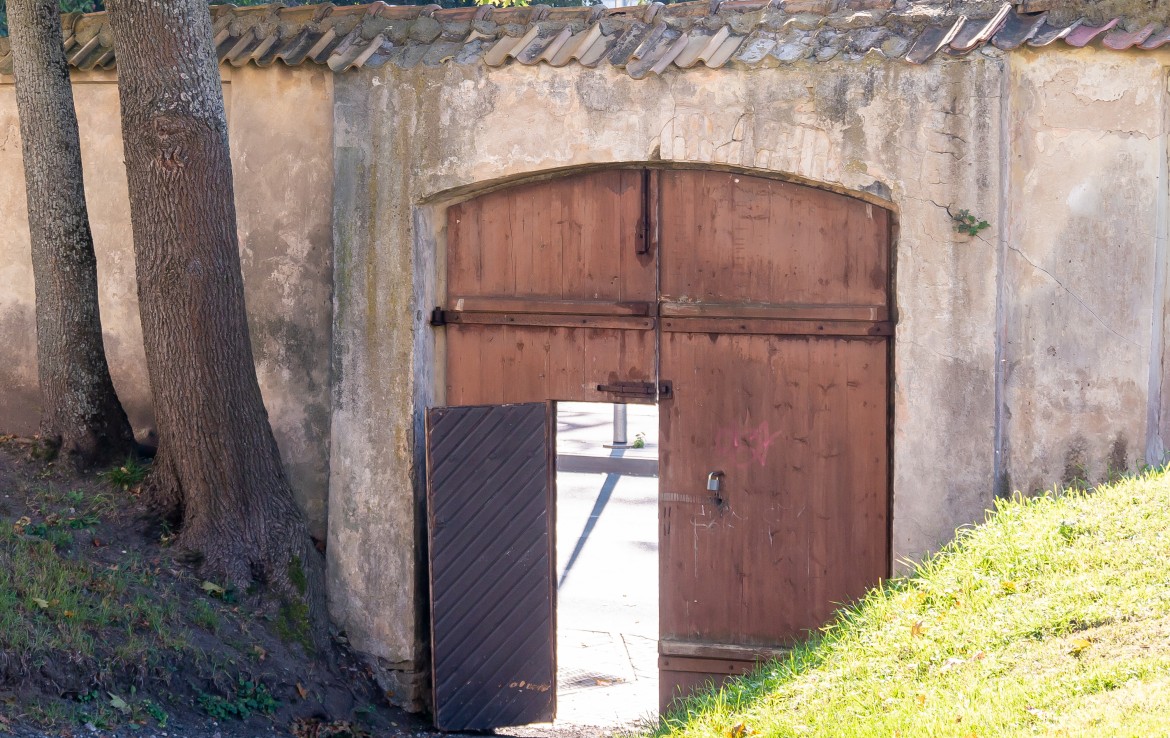 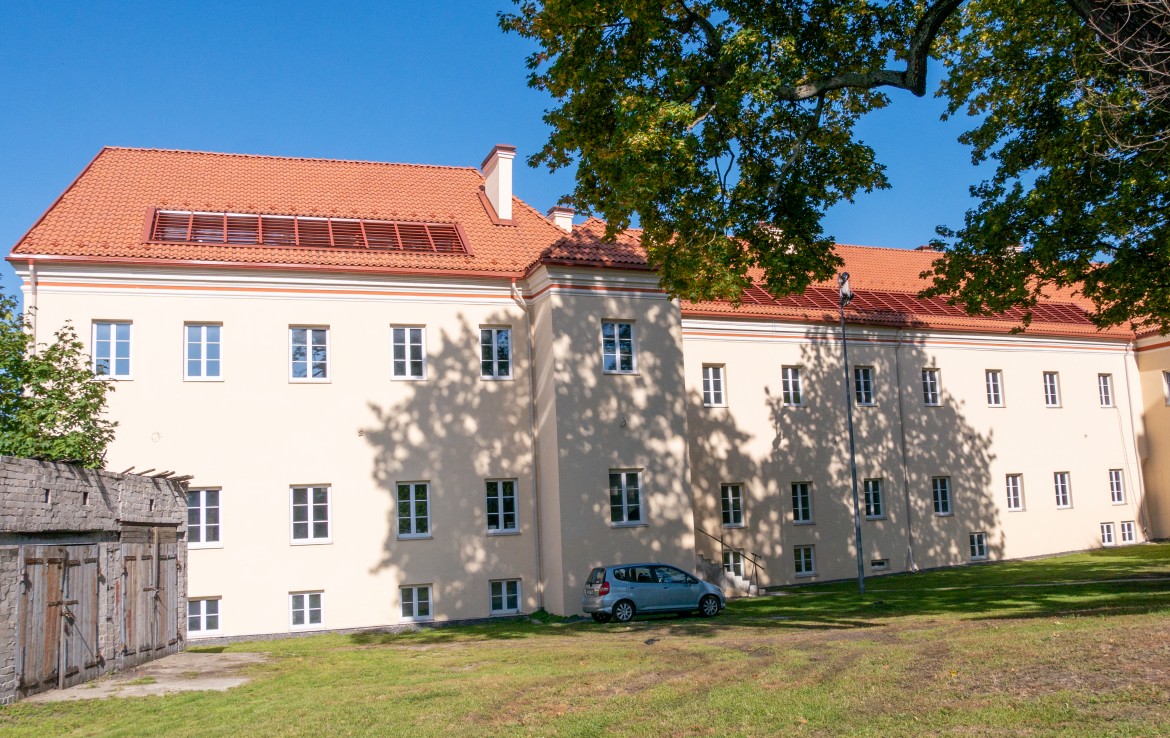 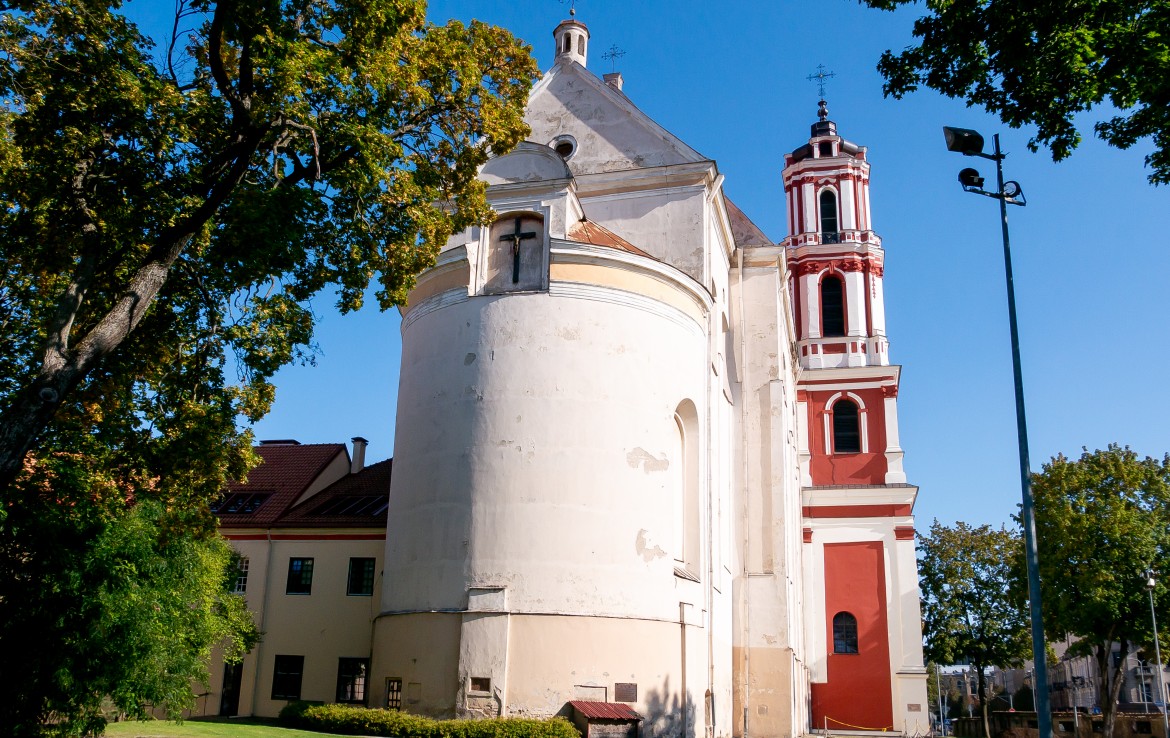 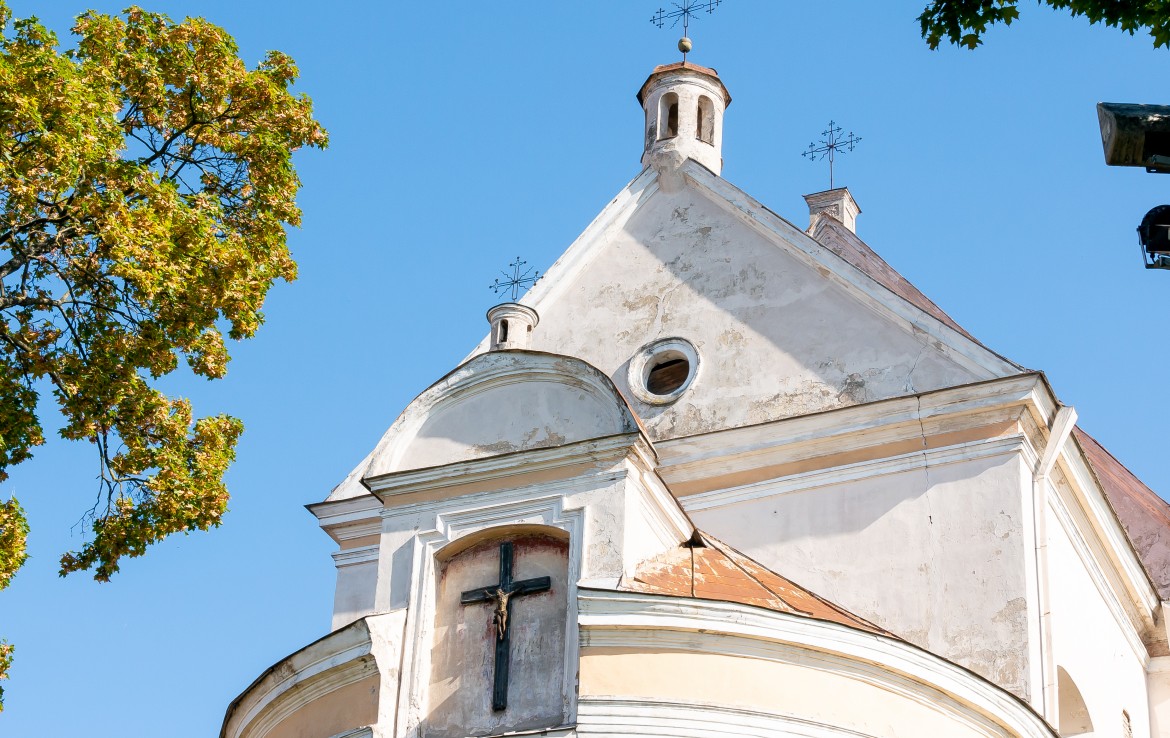 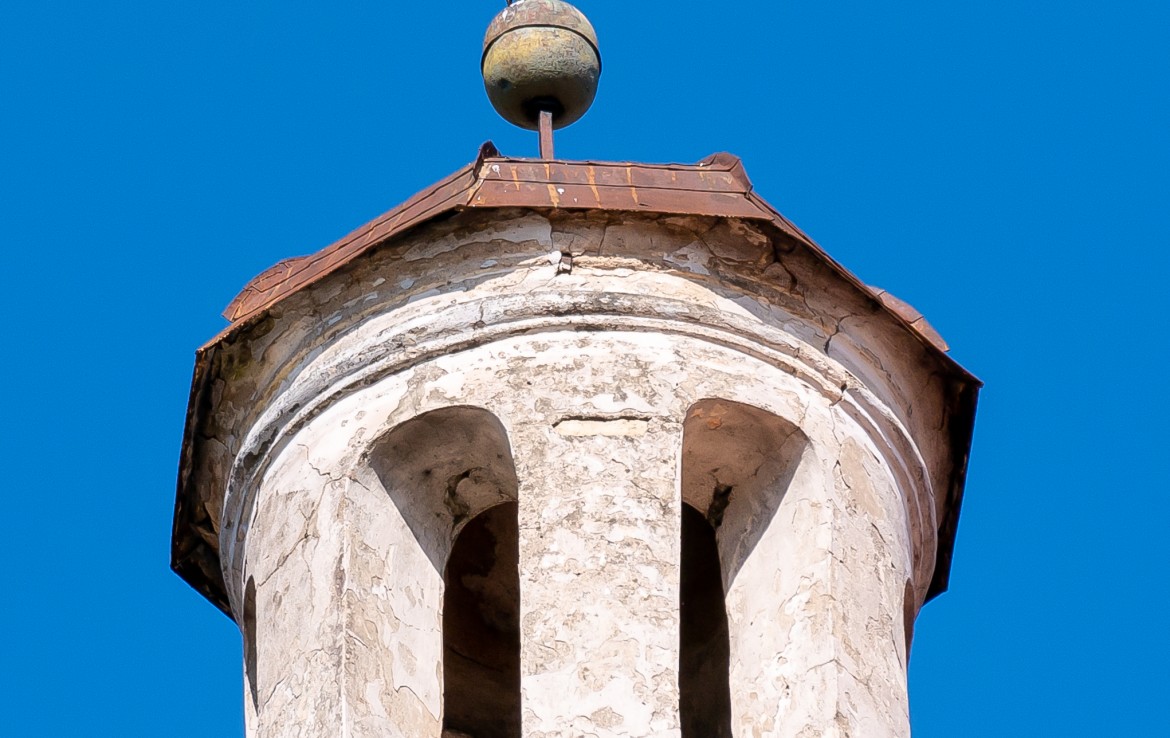 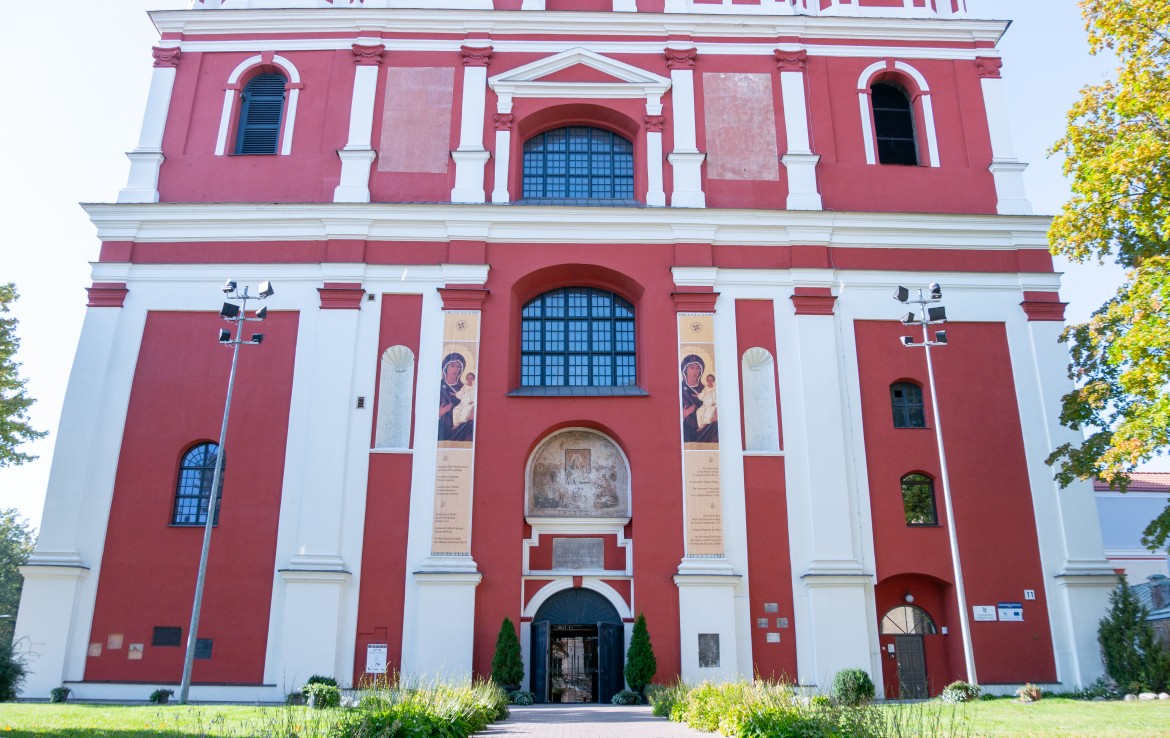 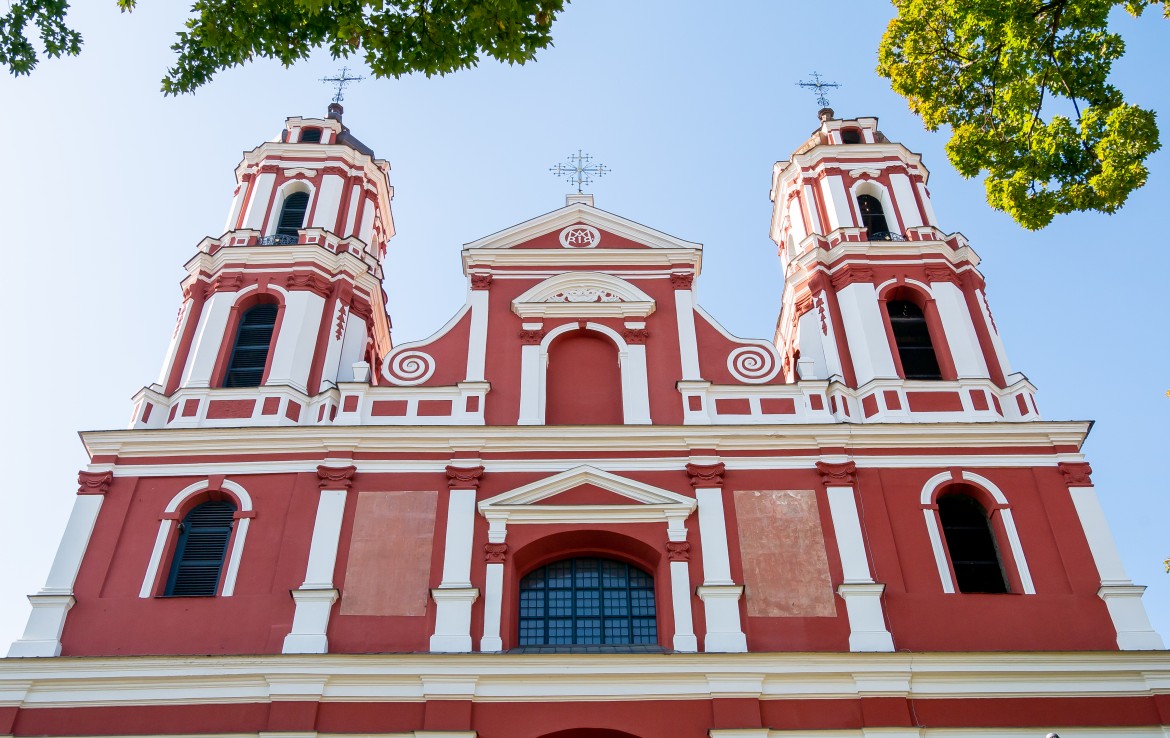 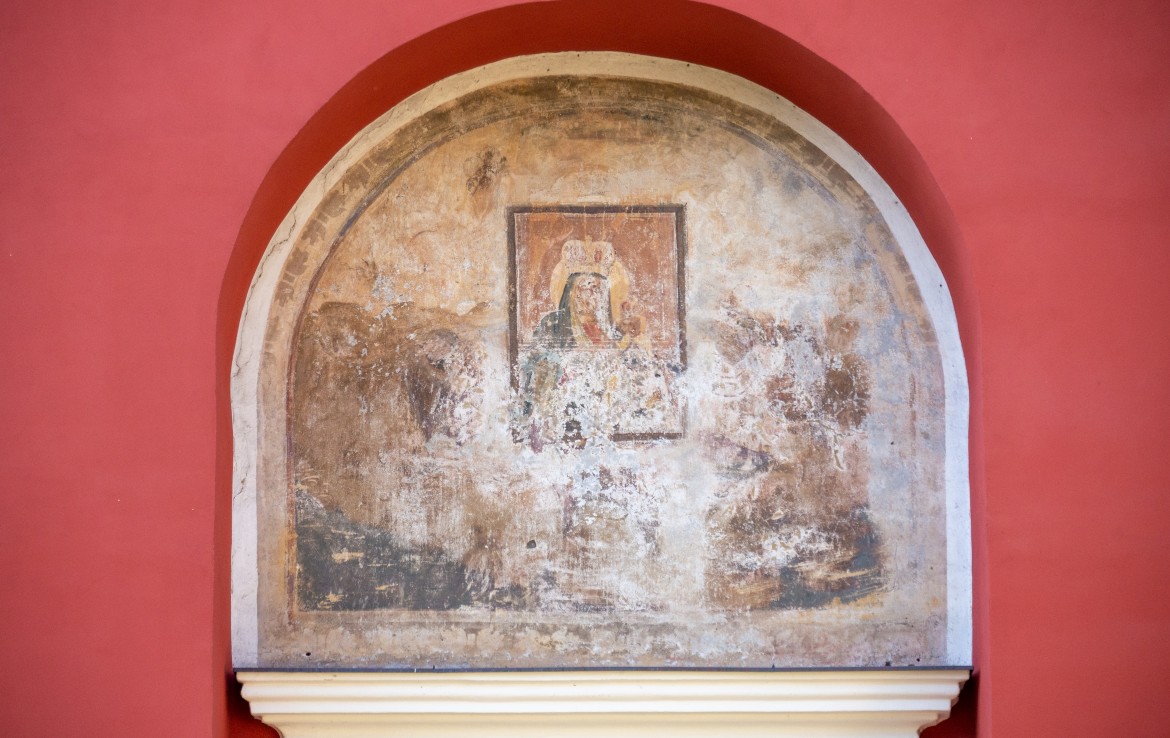 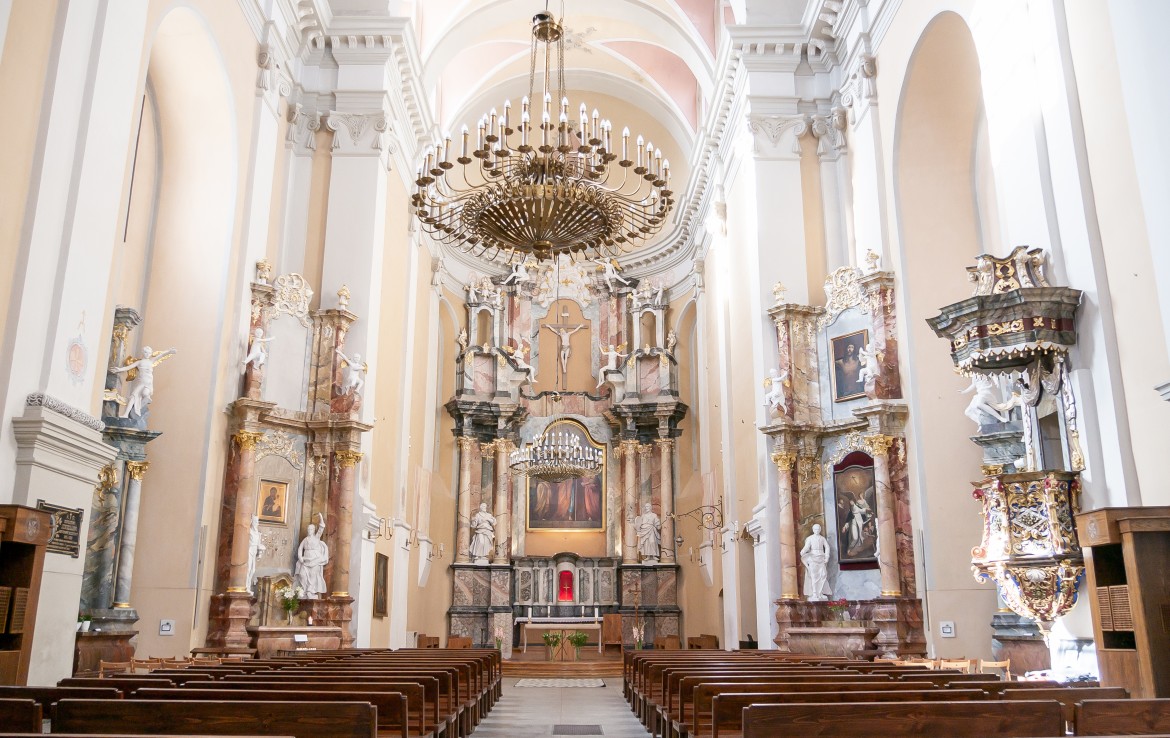 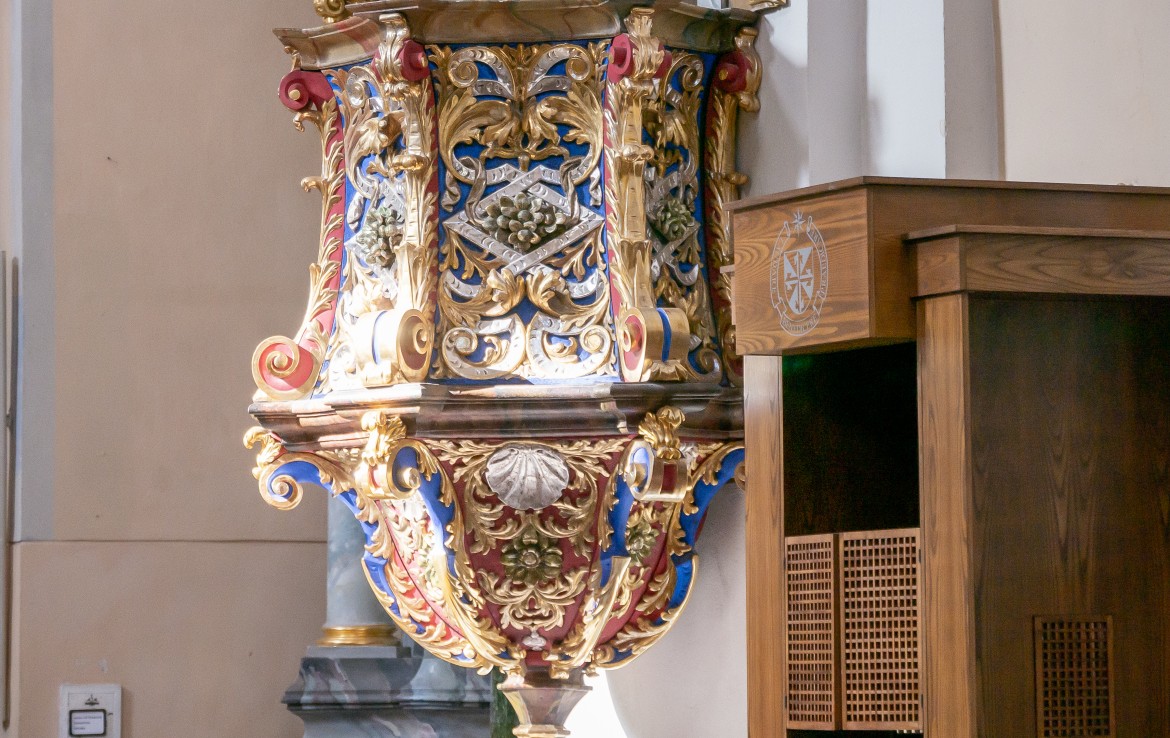 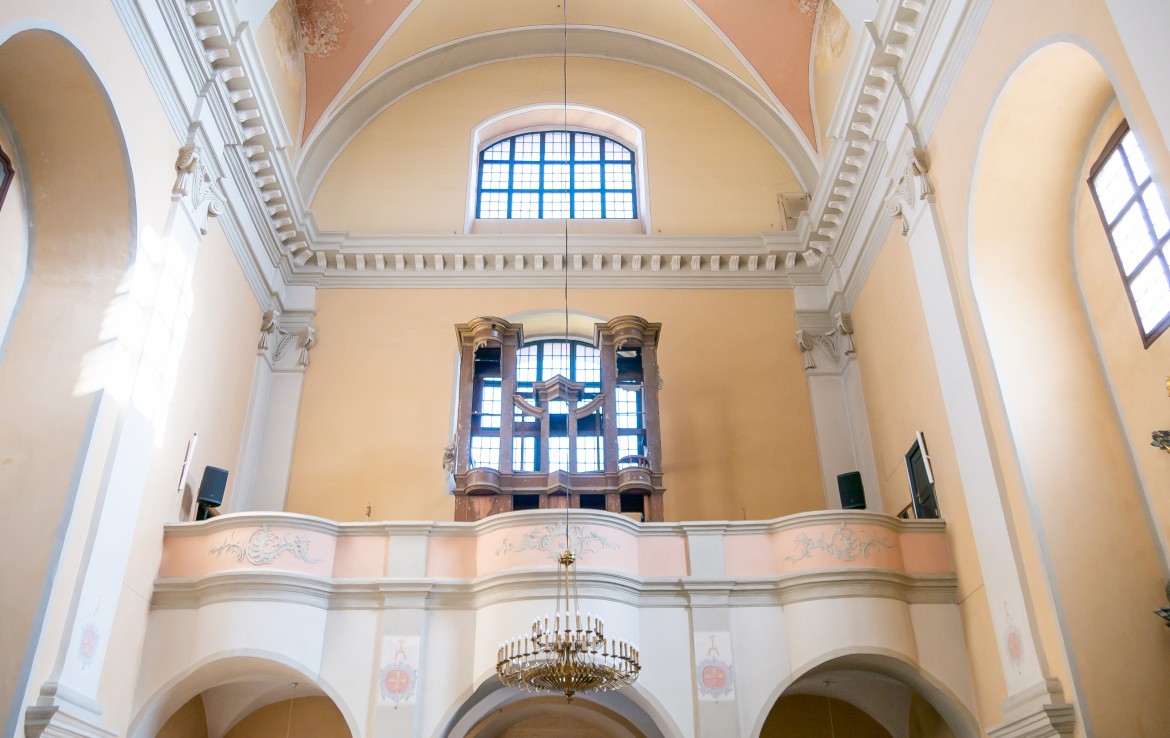 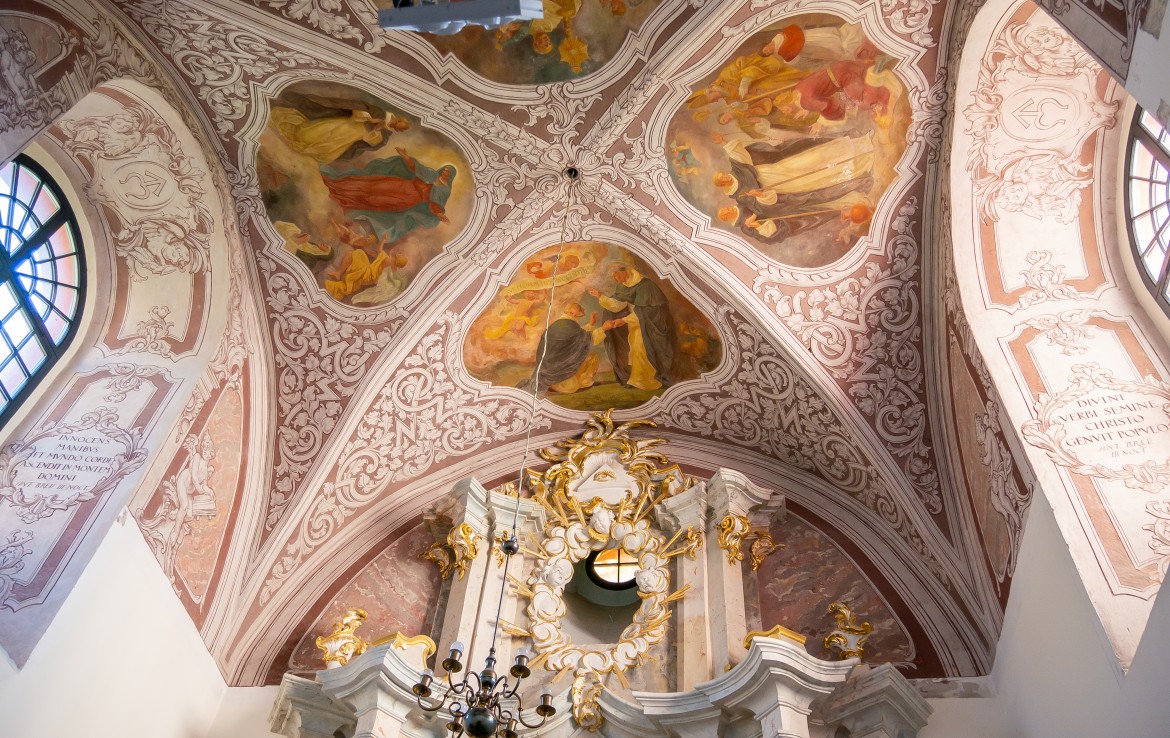 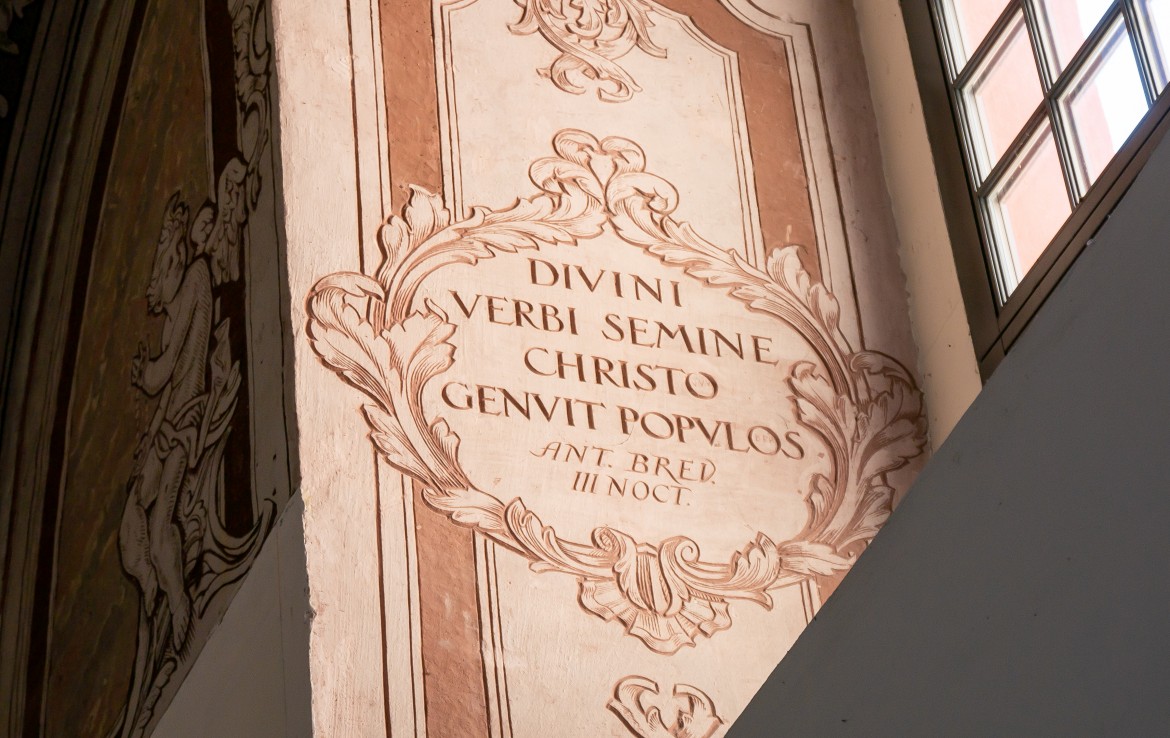 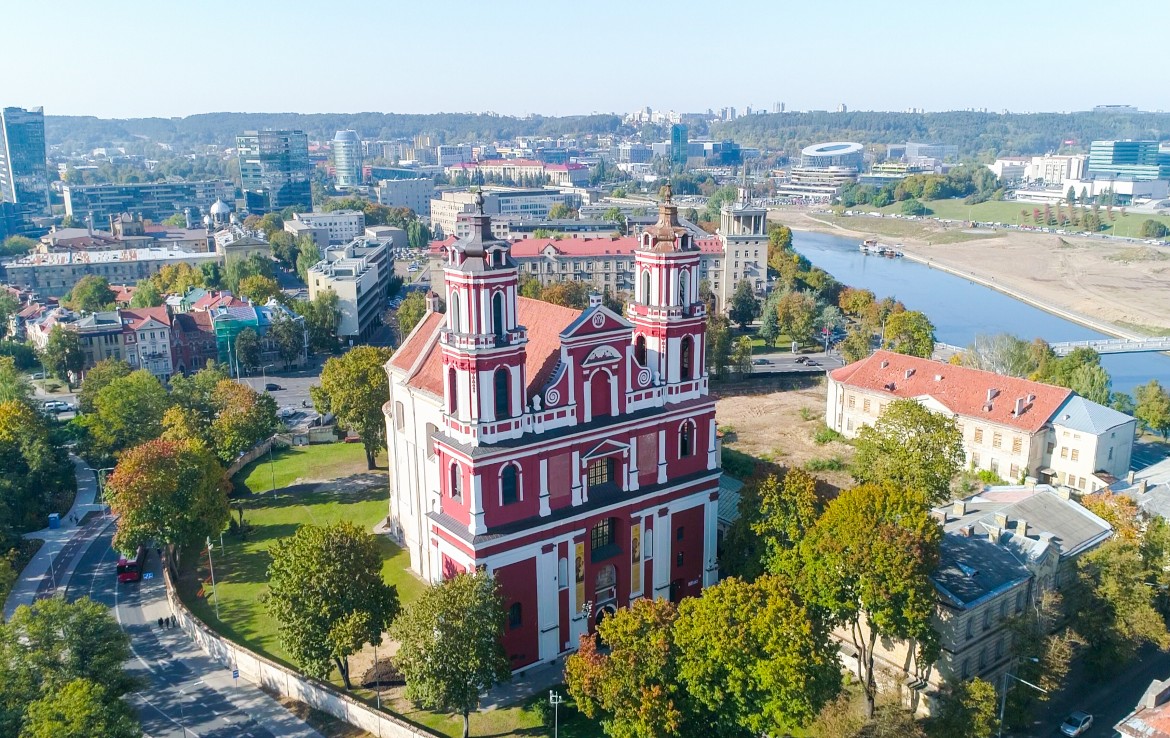 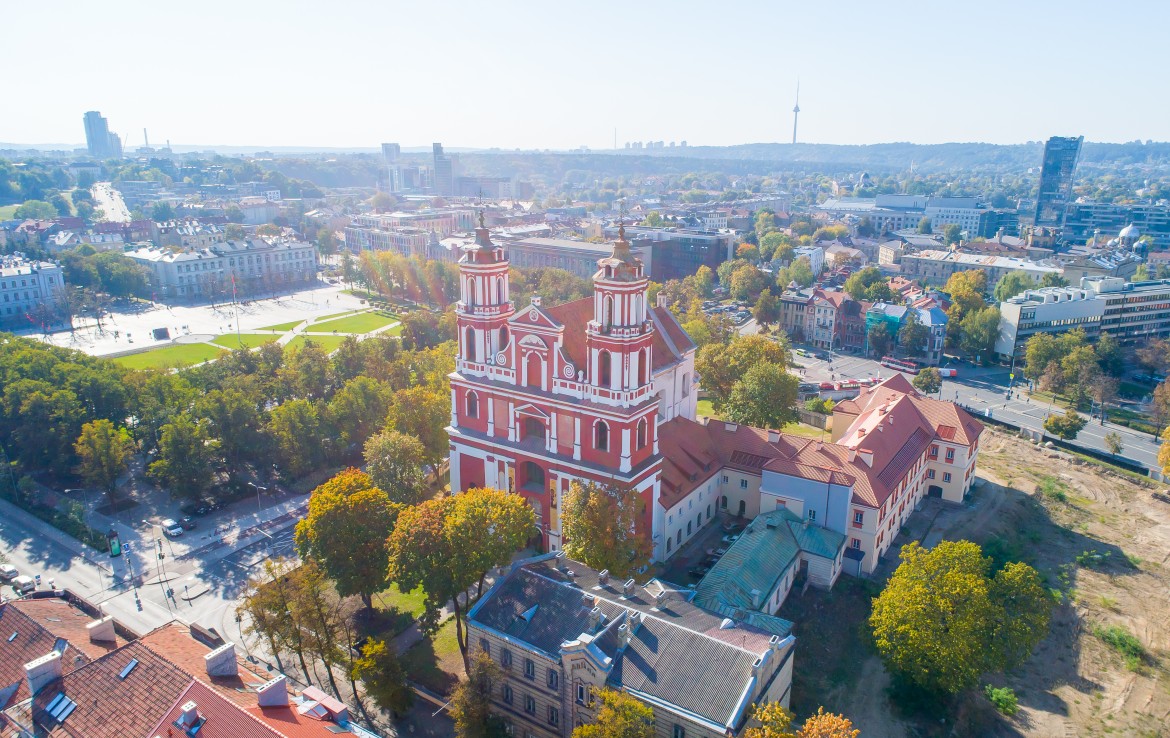 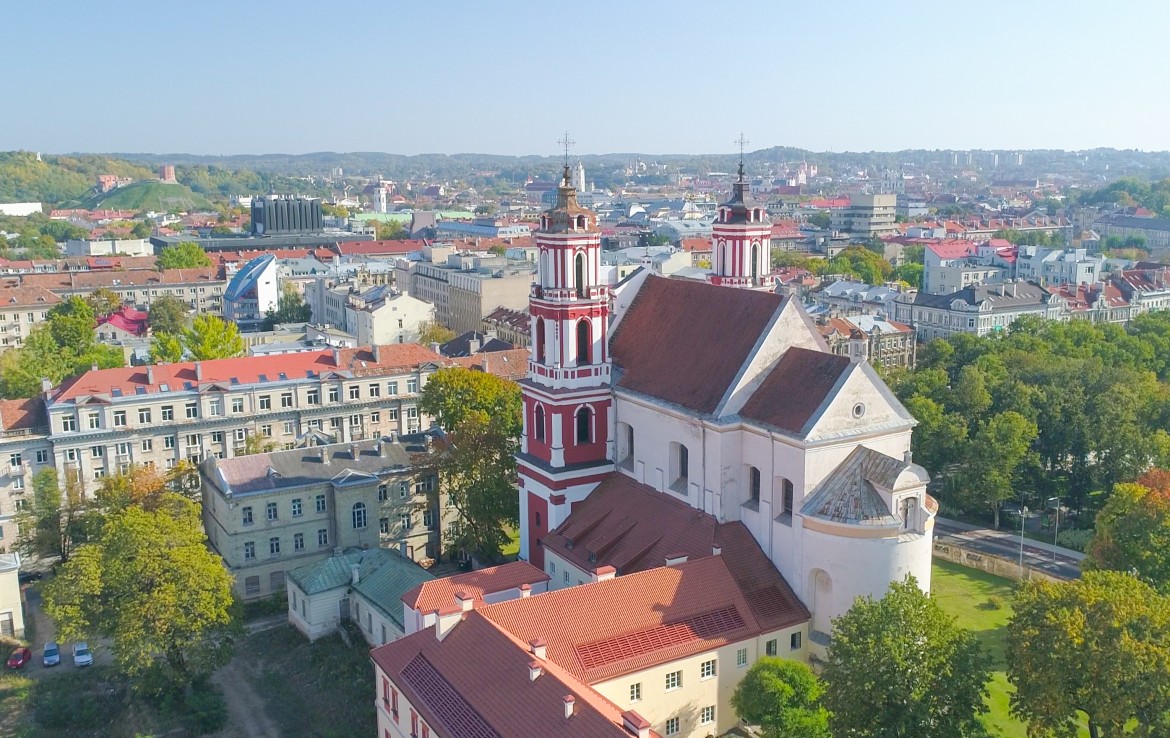