Ensemble of the Canon Regular of the Lateran Monastery, Vilnius

In the first half of the 17th century, the Canons Regular of the Lateran were given the church, which stood in Antakalnis, and a monastery was built for them too. A couple of decades later, during the war with Moscow, both buildings were destroyed. Michał Kazimierz Pac, Hetman of the Grand Duchy of Lithuania, funded the construction of a new church and monastery: the new church became one of the most prominent monuments of Baroque in Lithuania. The project has been designed by the Polish architect Jan Zaor, whose work upon his death in the course of the constructions was taken over by Giovanni Battista Frediani, author of Pažaislis Monastery ensemble. The church and the monastery were completed in 1682-1684, although the most impressive part – the elements of décor – took much longer.

The architecture of the church features shapes of the late Baroque. A particularly distinctive element is the columns, used in both sections of the protruding part of the front façade – they divide the façade vertically, while all previous Lithuanian Baroque church features pilasters. The pairs of these columns – Ionic at the bottom and Corinthian above – surround the portal and the large window, built in a rounded niche. The pediment solution is interesting as well: here it consists of two parts, arranged on different planes. The protruding part features a broken rounded pediment with a broken triangle behind it, which crowns the entire width of the middle part of the façade. The pediment sectioning has the higher part with an embossed composition in the niche, surrounded by fine double pilasters and finished with a triangular cornice at the top.

The cylindrical belfry section features two rising octagonal belfries. Looking at the church from a distance, they fade against the impressive 39 m dome. The edges, emphasized with its pilaster pairs and a massive entablature remind of the composition, used for the belfries. The top of the dome – the so-called sanctuary lamp – is vertically divided by volutes, arranged on pilasters. On the front façade we can see two sculptures – St. Augustine and St. Stanislaus – settled in niches, decorated with a shell ornament and finished with angel figures at the top. The pediment features an embossed composition, created in the late 17th century, while the side façades – two marble portals, which were later bricked and used for tombstone plates. The sacristies, leaning against the presbytery, are highlighted with small, single-section turrets.

The richly-decorated entablature and the pediment of the front portal, decorated with the coat of arms of the Pac family, as if prepares the visitor of the church for the interior of the sanctuary. Namely the interior of the church earned this building the title of one of the most important monuments of Baroque in Northern Europe. The impressive mouldings, which organically blend in with the construction elements of the building, were created by the Italians Pietro Perti and Giovanni Galli, assisted by local masters. There are several thousands of examples of stucco décor with themes ranging from biblical to everyday life. The murals survived as well, attributed to the works of Martino Altomonte or Michelangelo Palloni – they are arranged on the vaults of the middle nave. The sacristy is decorated with two murals of another author. During the reconstruction of the church interiors in the early 19th century, one of Poland’s churches bought the great wooden altar of this church – the new solution for the central piece of the church was much more modest; the Rococo pulpit and some other sculptures were built approximately at the same time.

The rather massive shapes of the exterior of the church are complemented by the little chapels with rounded helmets, integrated into the corners of the fence, surrounding the churchyard.  The church is connected to the monastery building by an arcade with a corridor on the top, stretching from the presbytery of the church. This is a rare architectural solution in Lithuania. The wings of the monastery building create a closed yard and the interiors of the buildings still have the cross and barrel vaults with lunettes. Nevertheless, both the plan of the building and a part of its façades changed in the 19th century, when this, like many of Vilnius’ monasteries, was closed and used for other purposes. 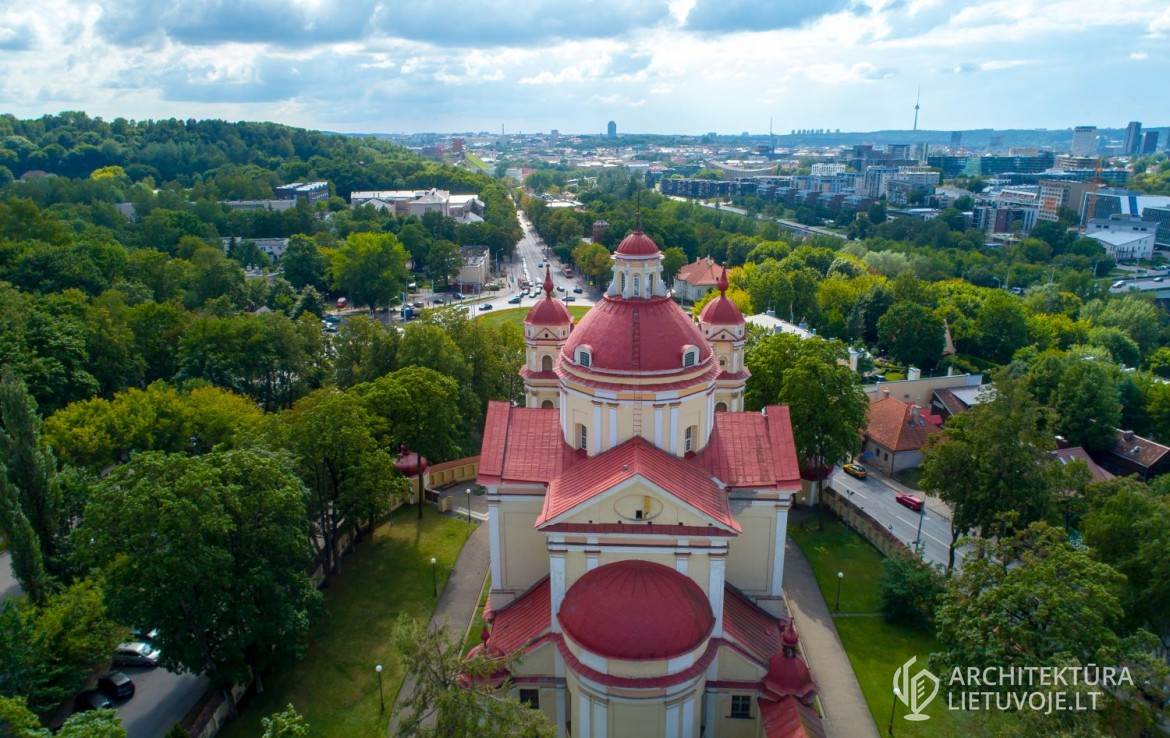 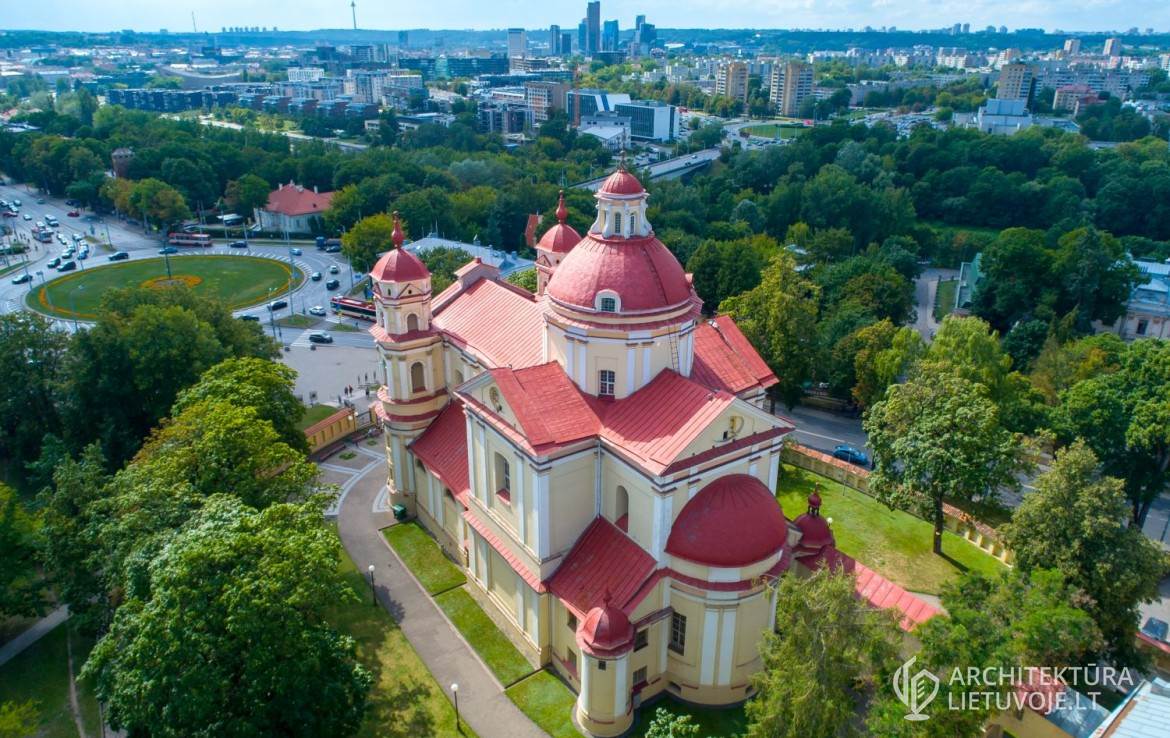 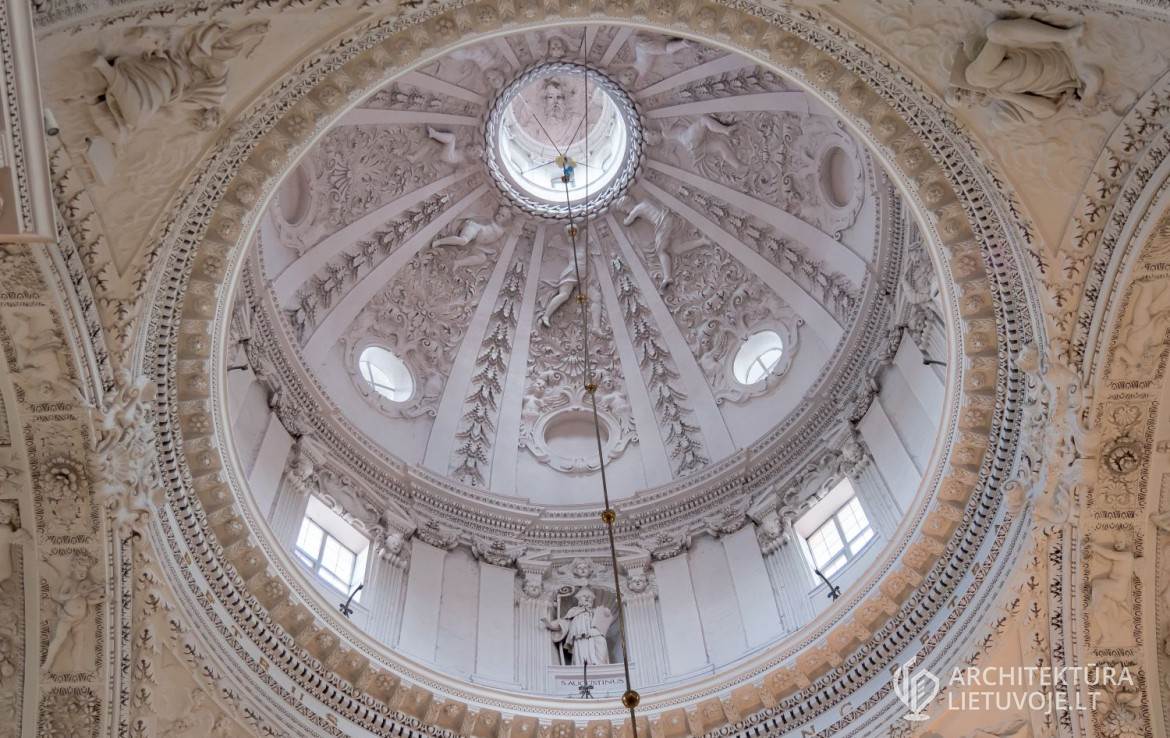 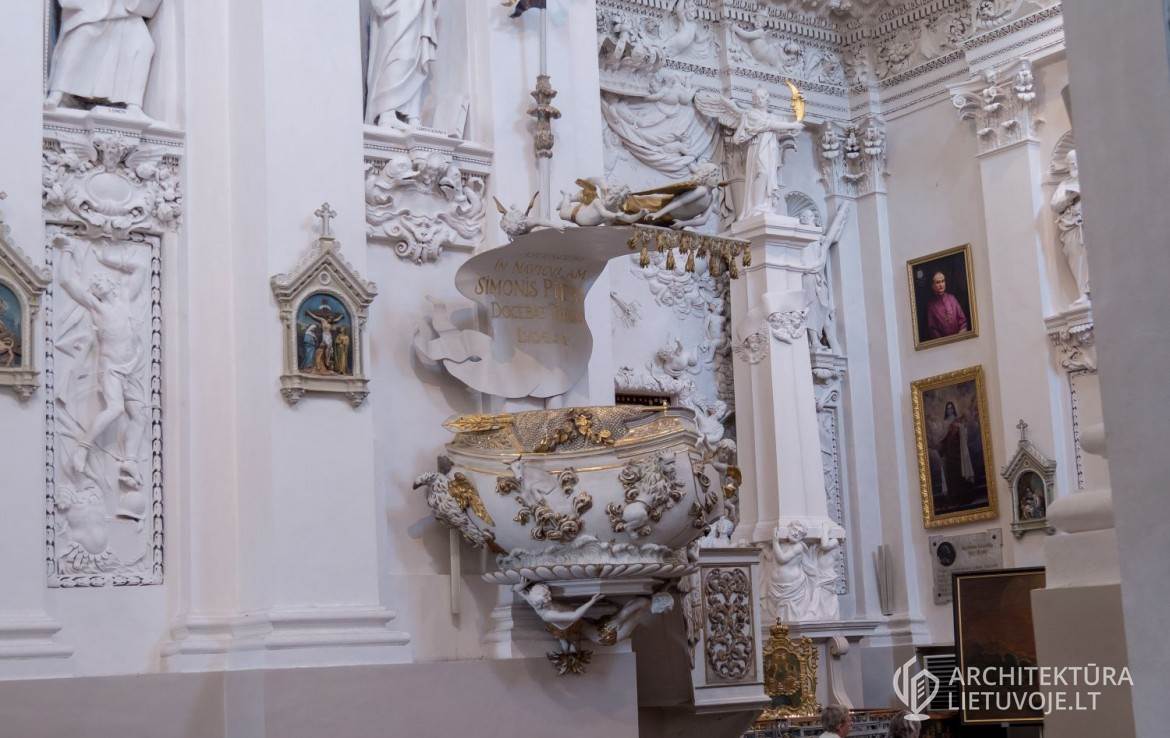 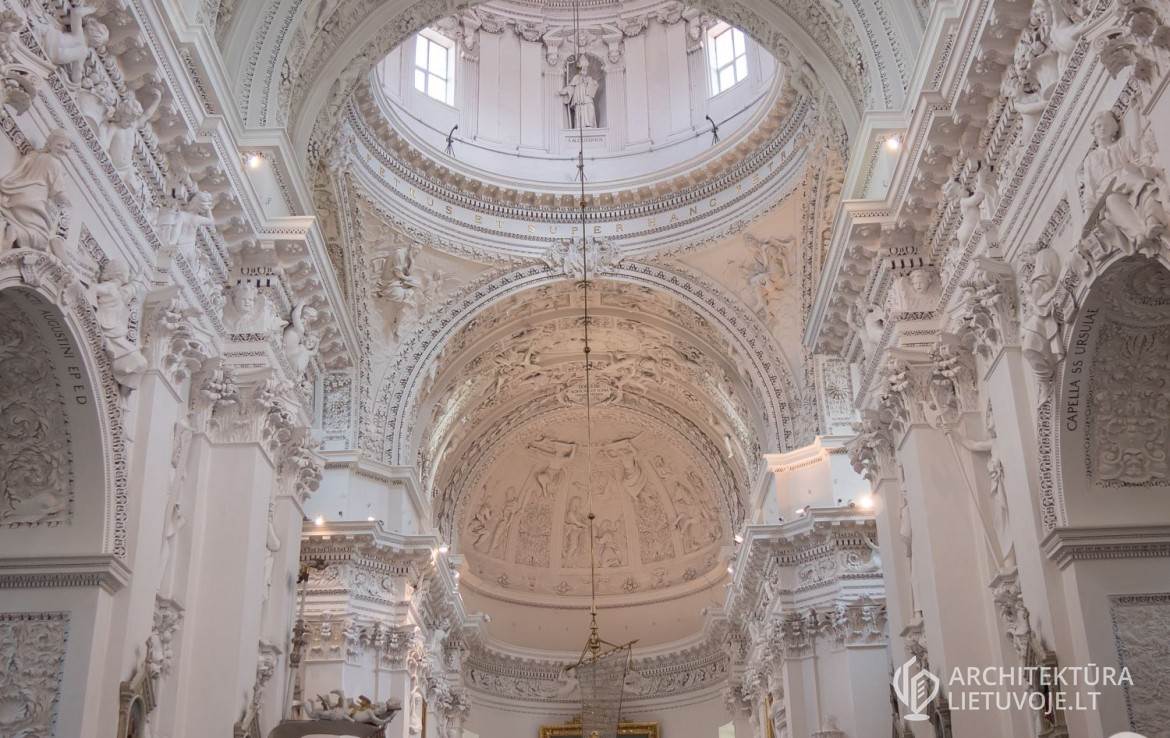 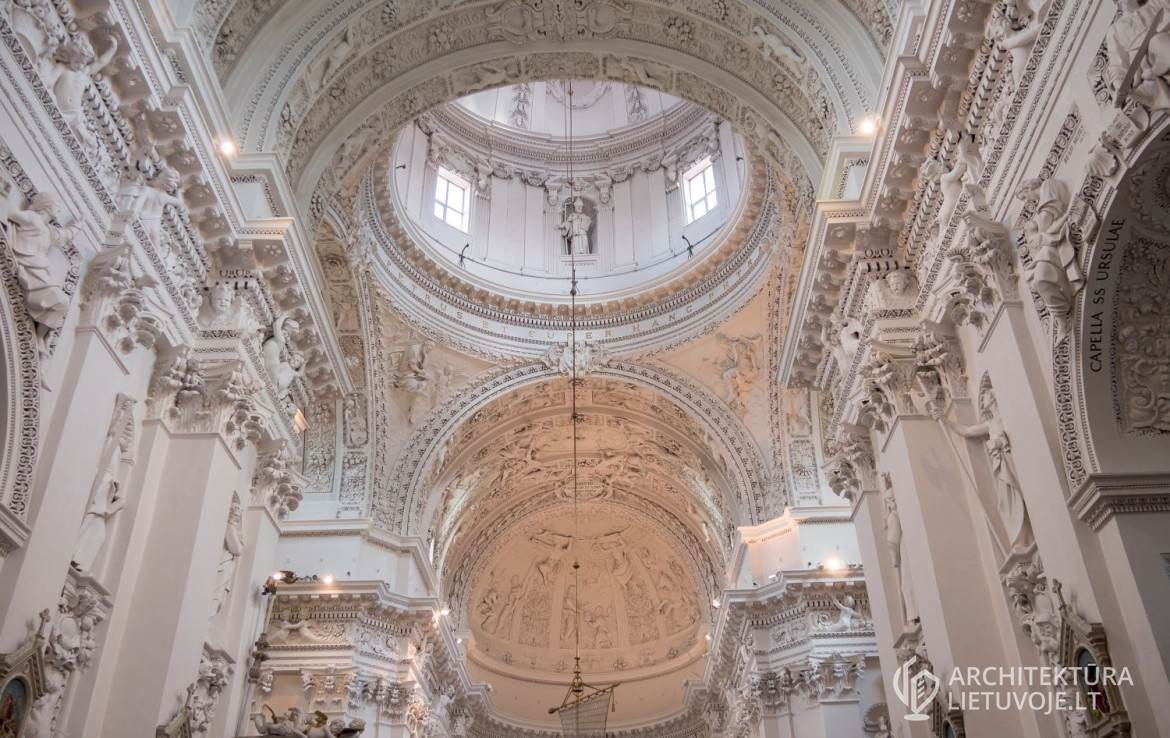 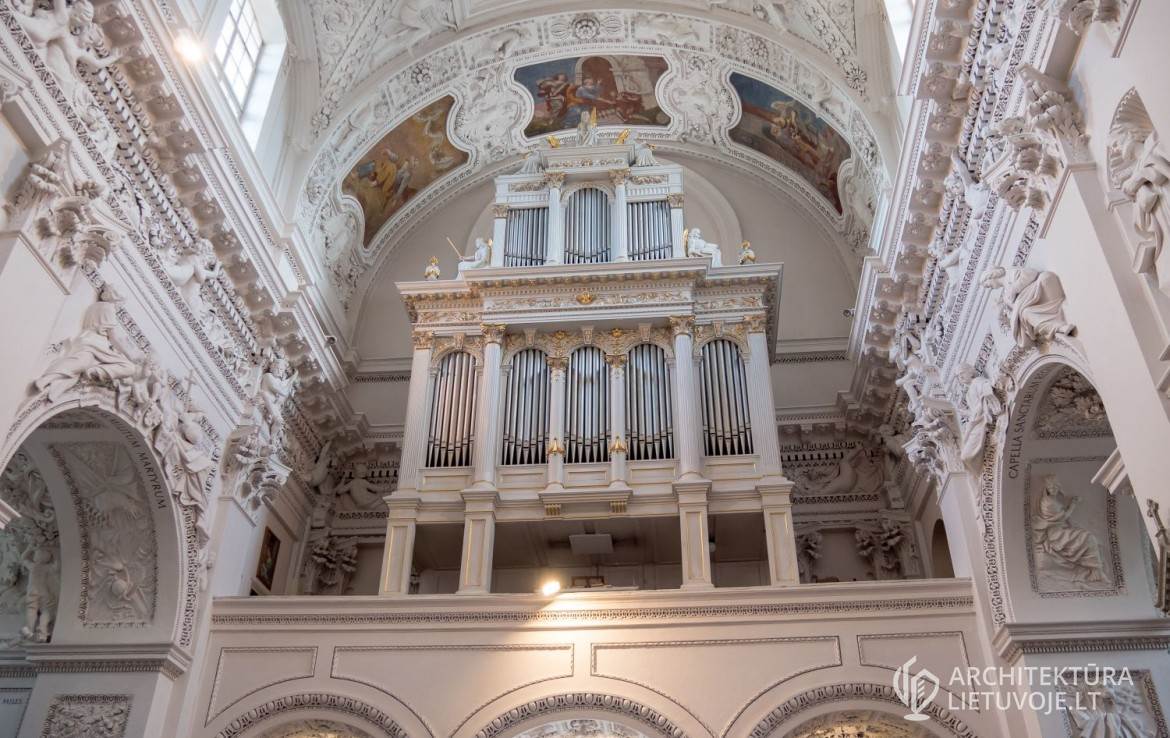 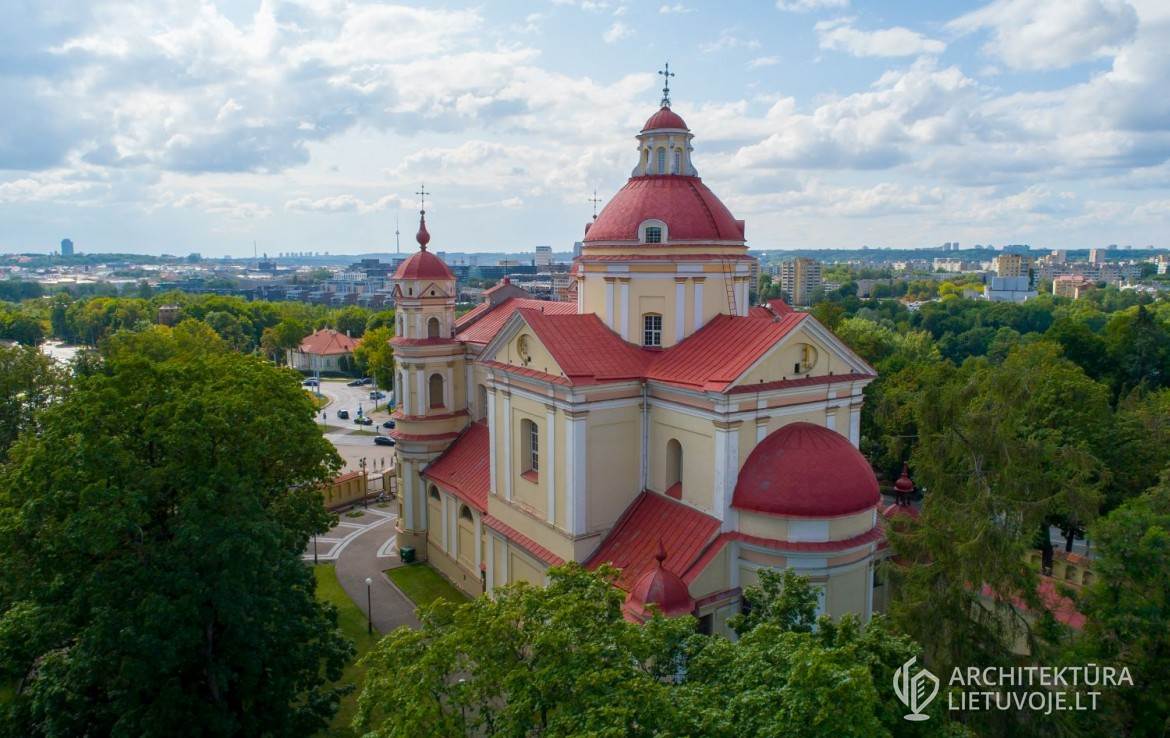 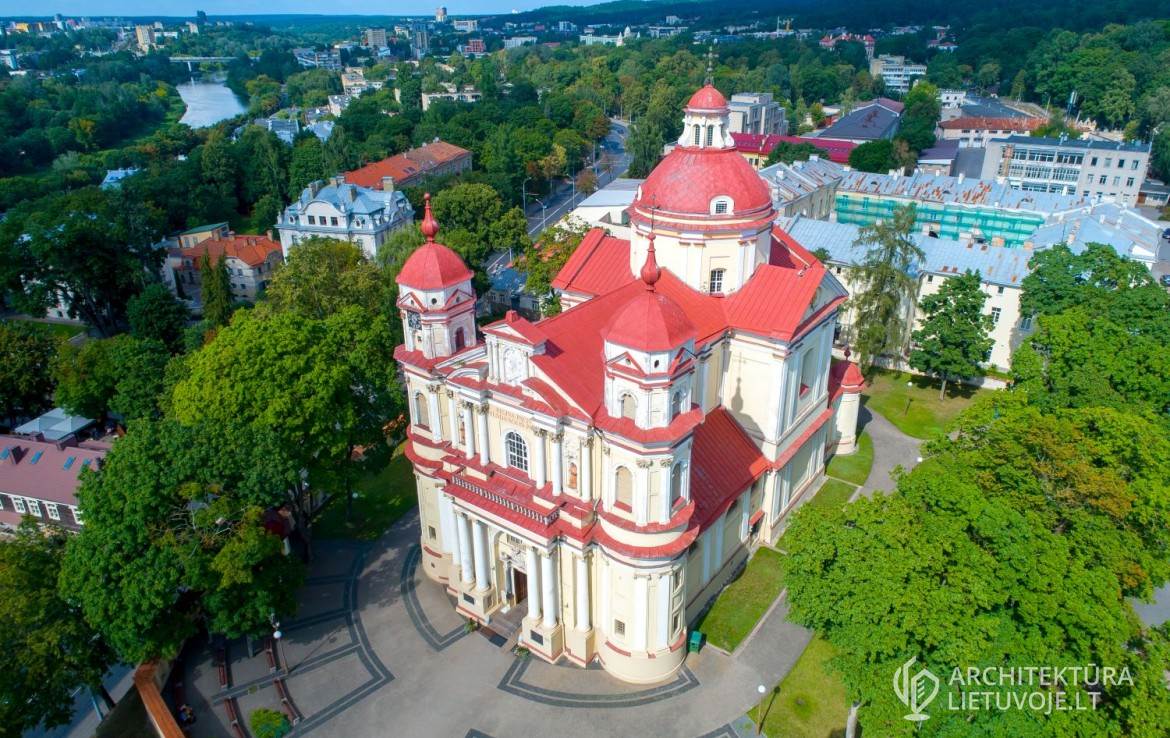 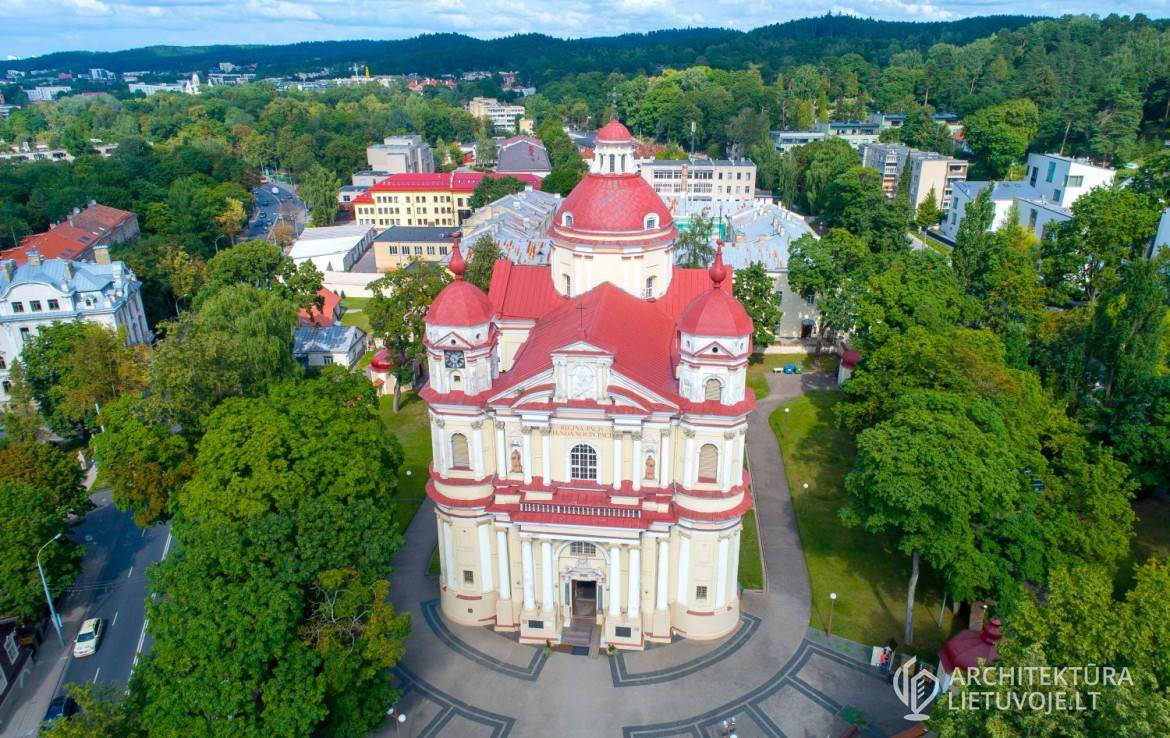 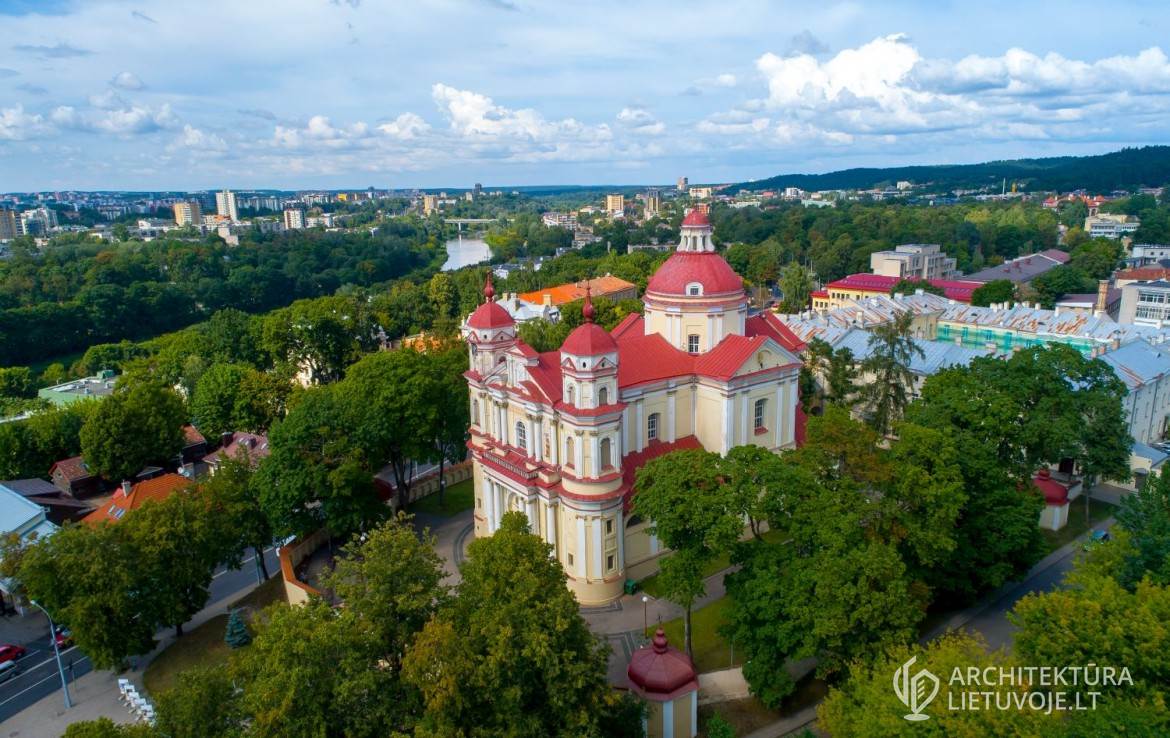 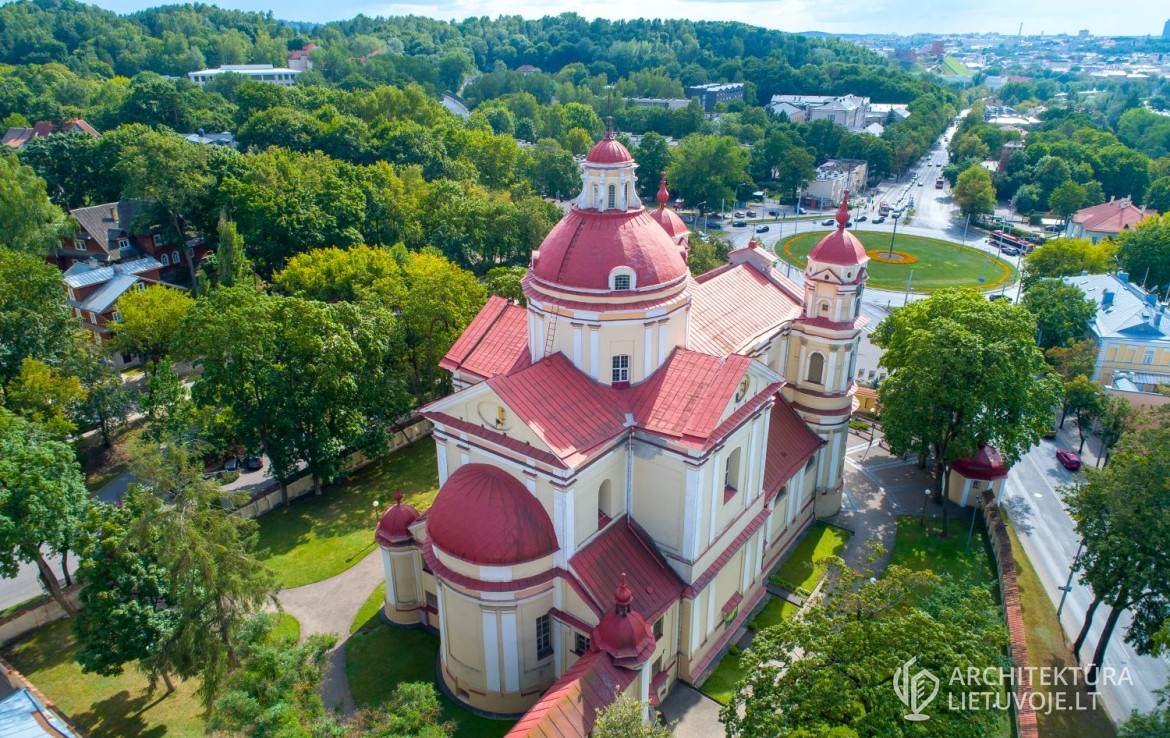