Videniškiai Church is an example of Renaissance-type buildings of cult, which has been spreading since the early 17th century. A single-nave, rectangular space was typical of it together with a large tower in the front part of the central axis, where the main entrance used to be.  Like many other important buildings in this region, Videniškiai Church appeared on the initiative of the Giedraičiai family – it was built in 1618, at the same time as the Monastery of the Canons nearby.

On the front part of a slender and tall main volume, a massive to compare tower rises, made of several parts – the main part of the tower, square in plan, consists of one tier, on all sides framed by pilasters, running along the entire height of it. In the planes between them, on three sides of the tower, there is a composition of different niches and windows, diversified by triangular fasciae installed on the top part of the upper large niche as well as small hexagonal windows. The tower ends with a two-tier octagonal part.

Verticality is highlighted in other facades of the church as well, the planes of which with the rounded arch windows are divided by pilasters too. In the front facade parts, surrounding the tower, fasciae of straight forms are integrated above the windows, broken in accordance with rectangular form of windows. There is no portal – the entrance is accentuated only by a modest, straight cornice above it. The volume of the building ends with a slightly narrower part of the presbytery, still retaining the tallness of the large volume, with the rounded apse. The chapel’s addition, slightly damaging the rectangular plan of the church, appeared later – under it, a mausoleum of the Giedraičiai family was established. Apparently, the parts, surrounding the tower on both sides, resulted from later reconstructions.

Inside the church, one can see the vaults with lunettes – in both the vaults and the capitals of pilasters holding them, one sees Renaissance stucco works. Some survived epitaphs reach us from the 17th century, while in the altars one can see samples of Renaissance paintings. The altars themselves, like the pulpit, appeared after one century has elapsed, and, although they bring more Baroque aesthetics, still harmoniously match the interior of the church: Renaissance serenity is sensed in the altars. 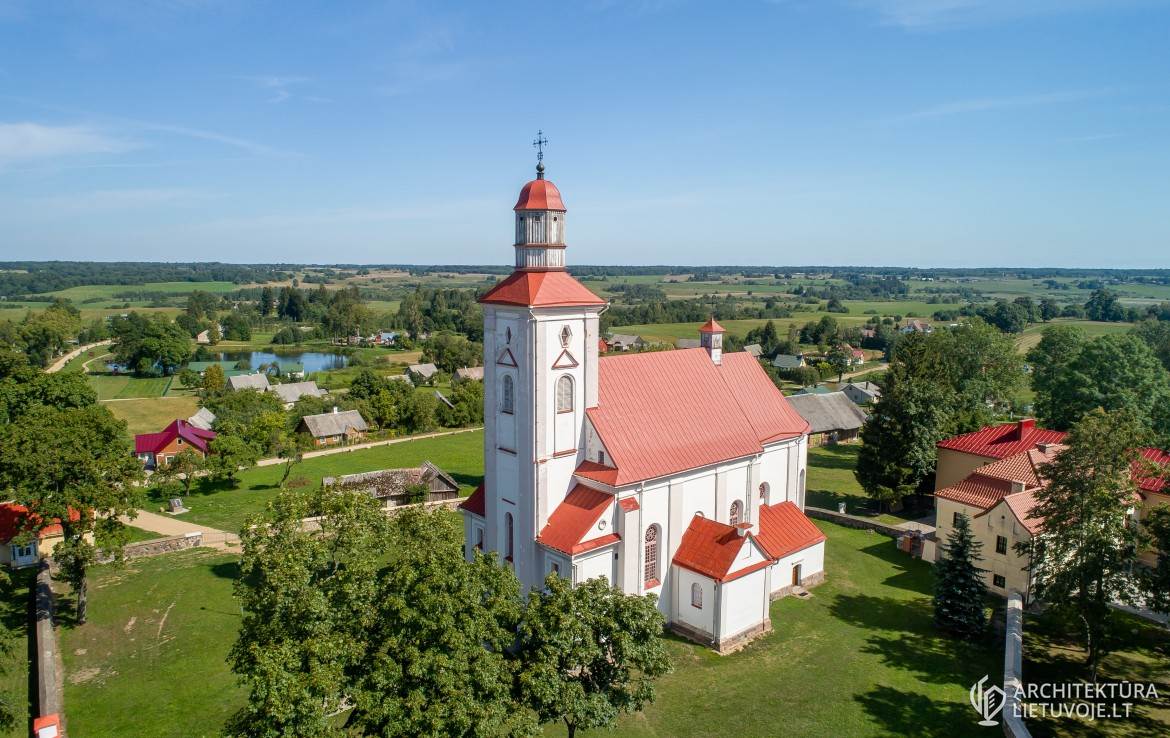 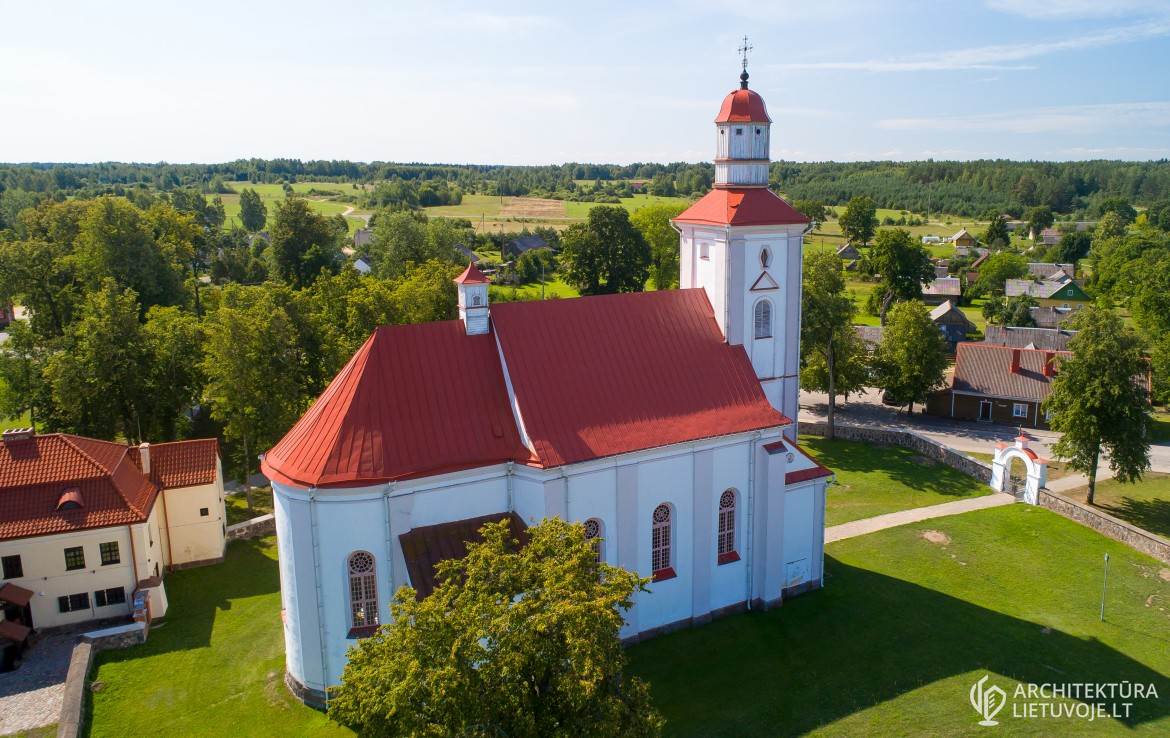 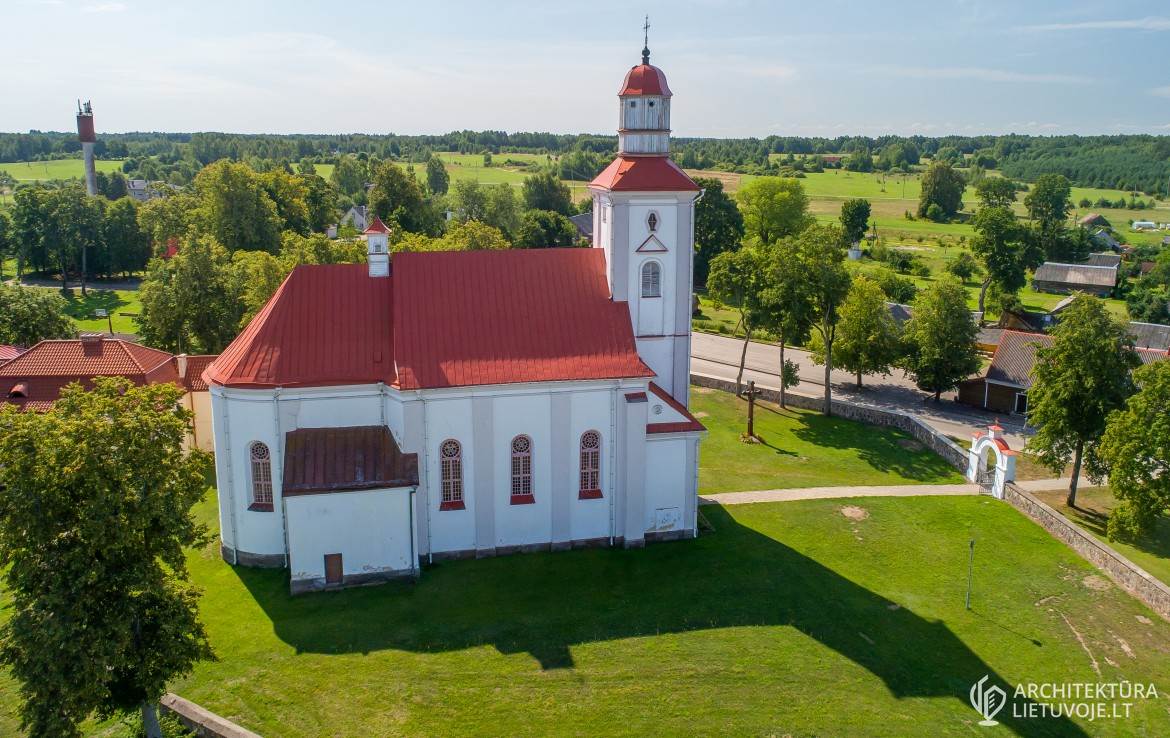 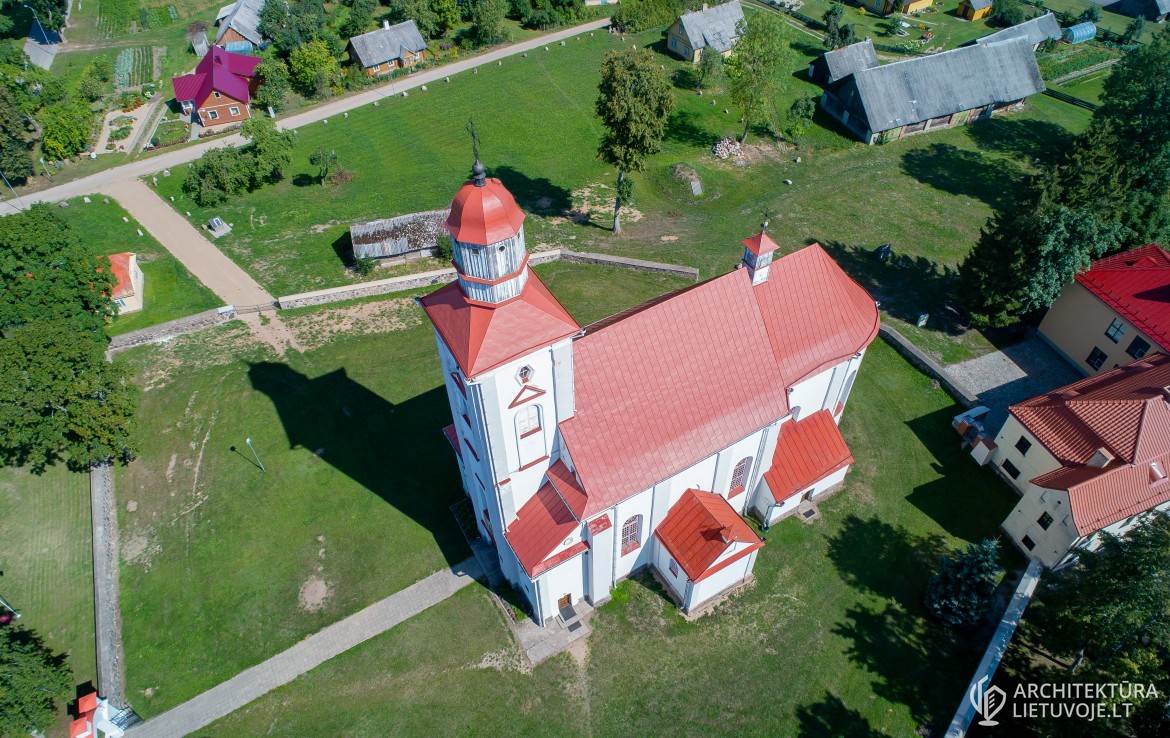 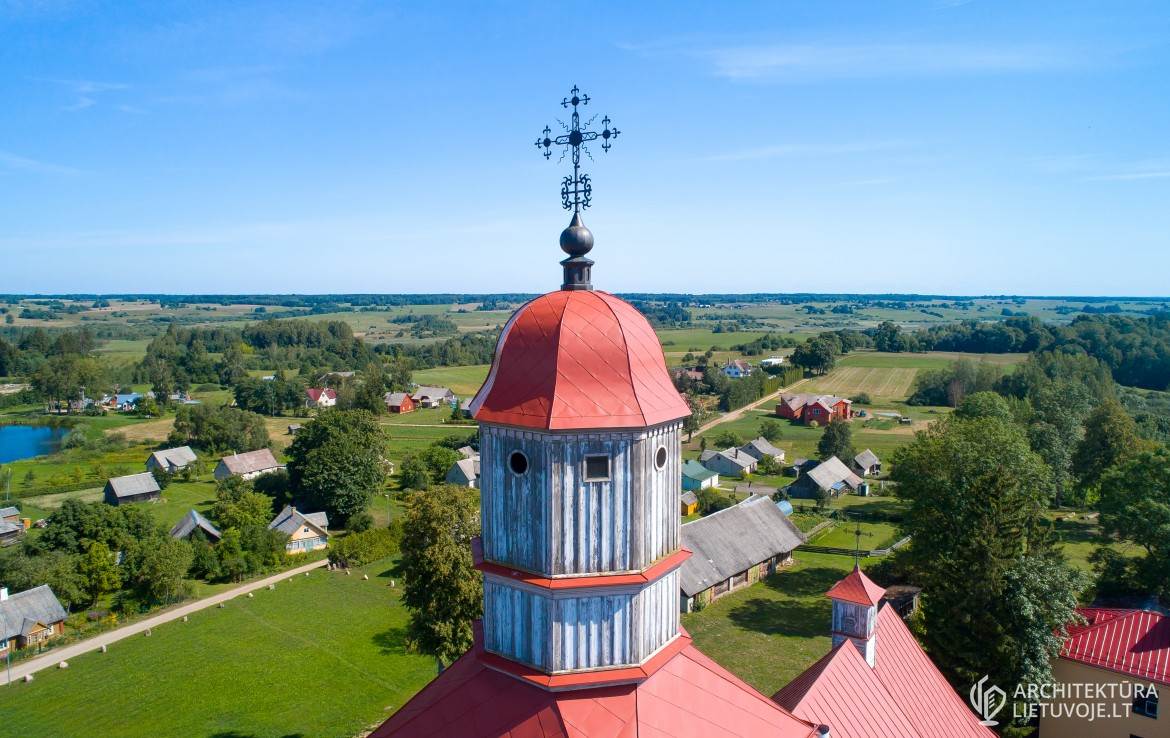 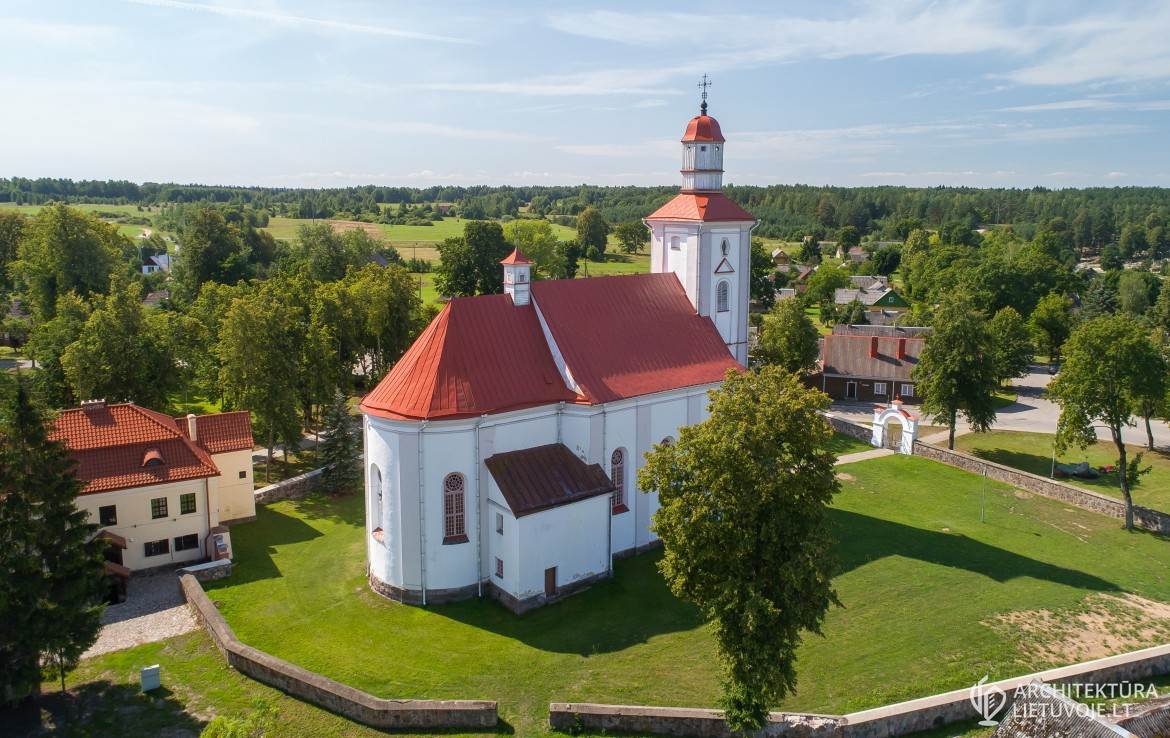 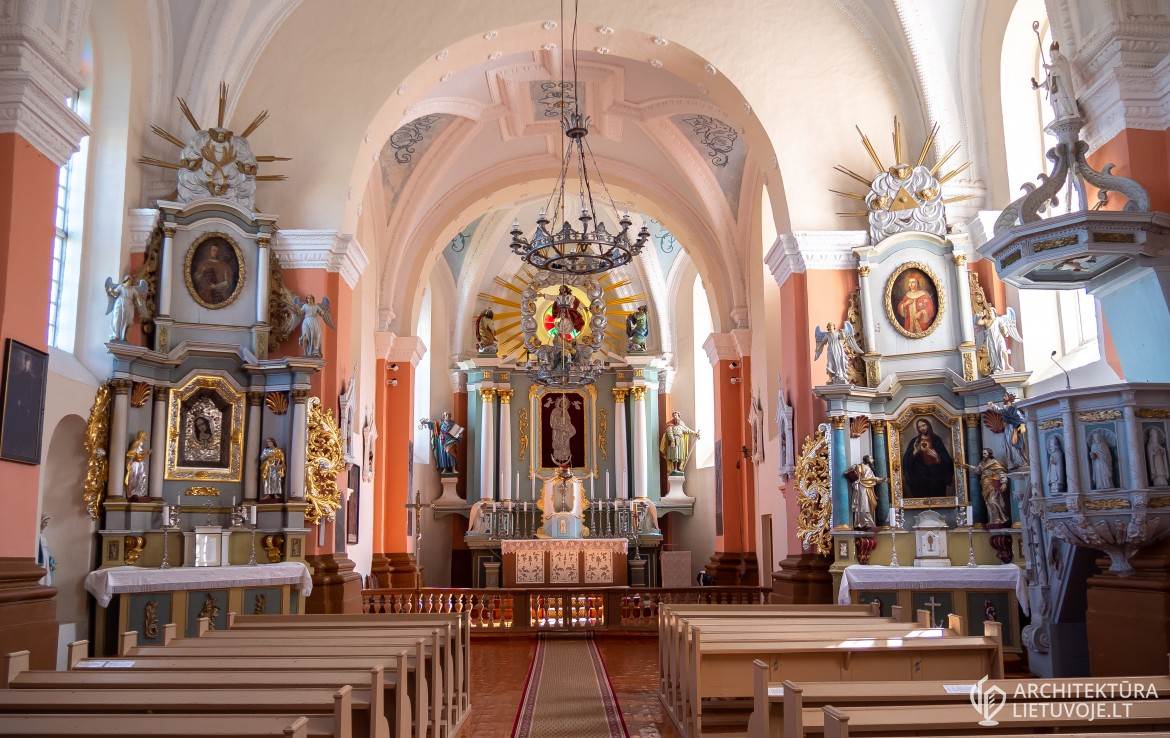 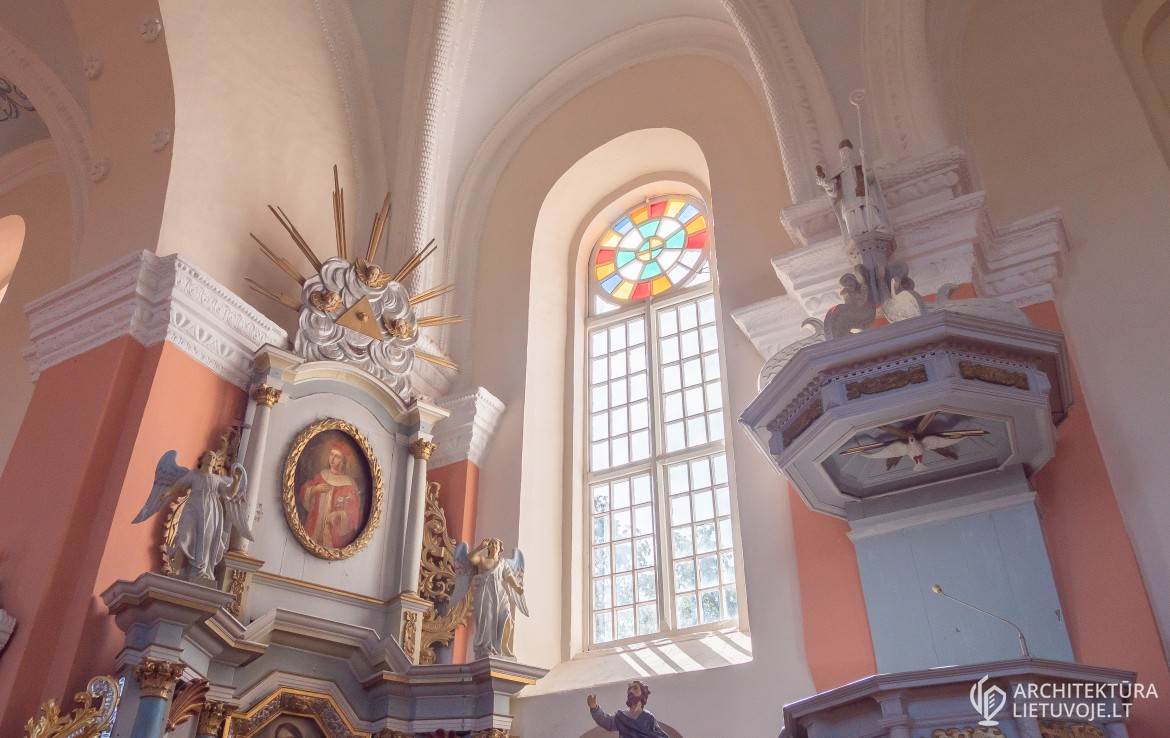 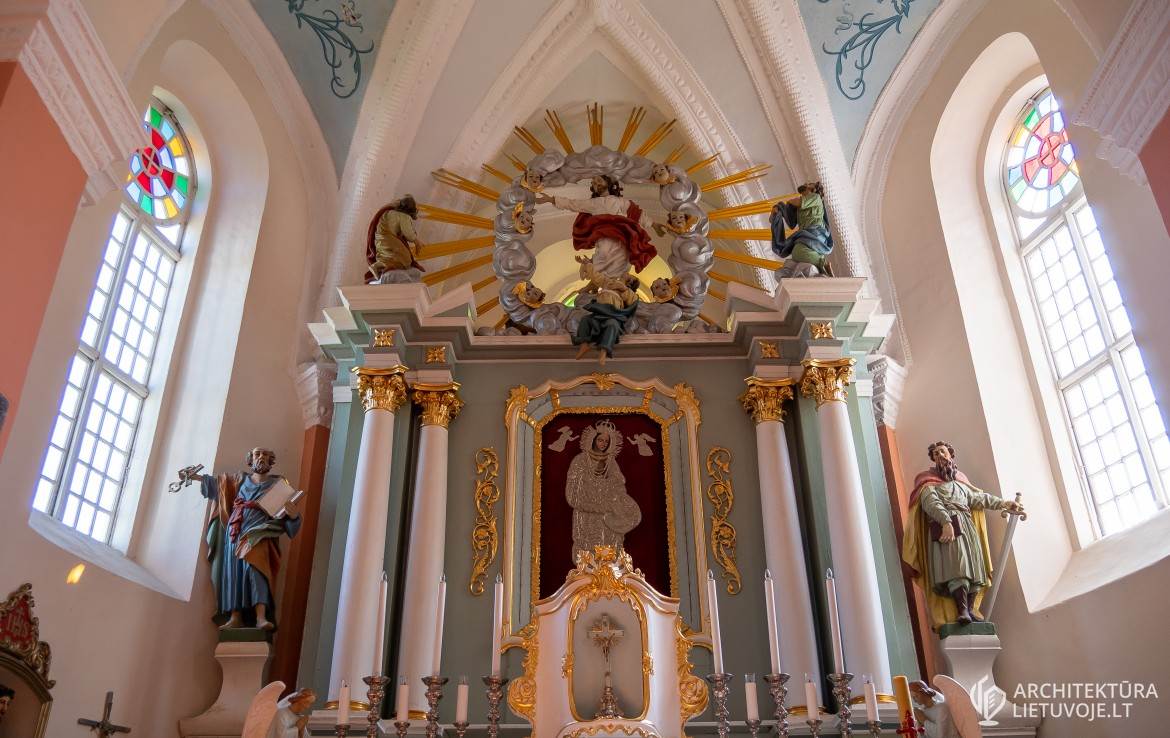 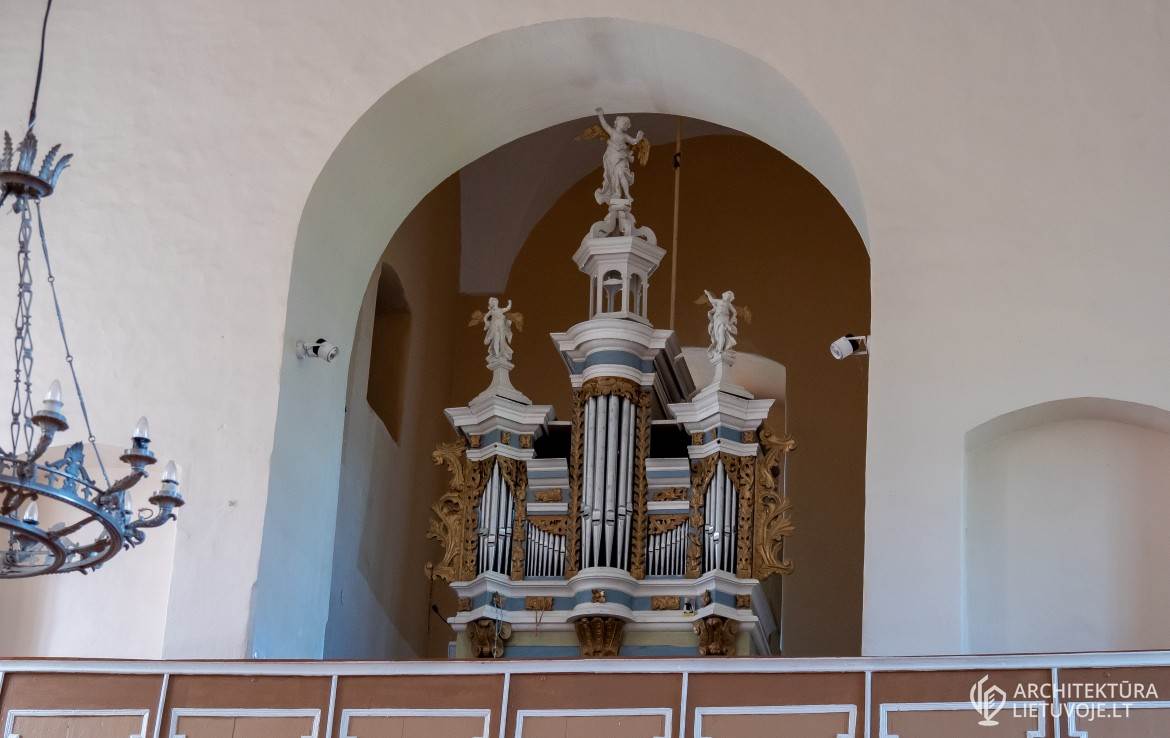 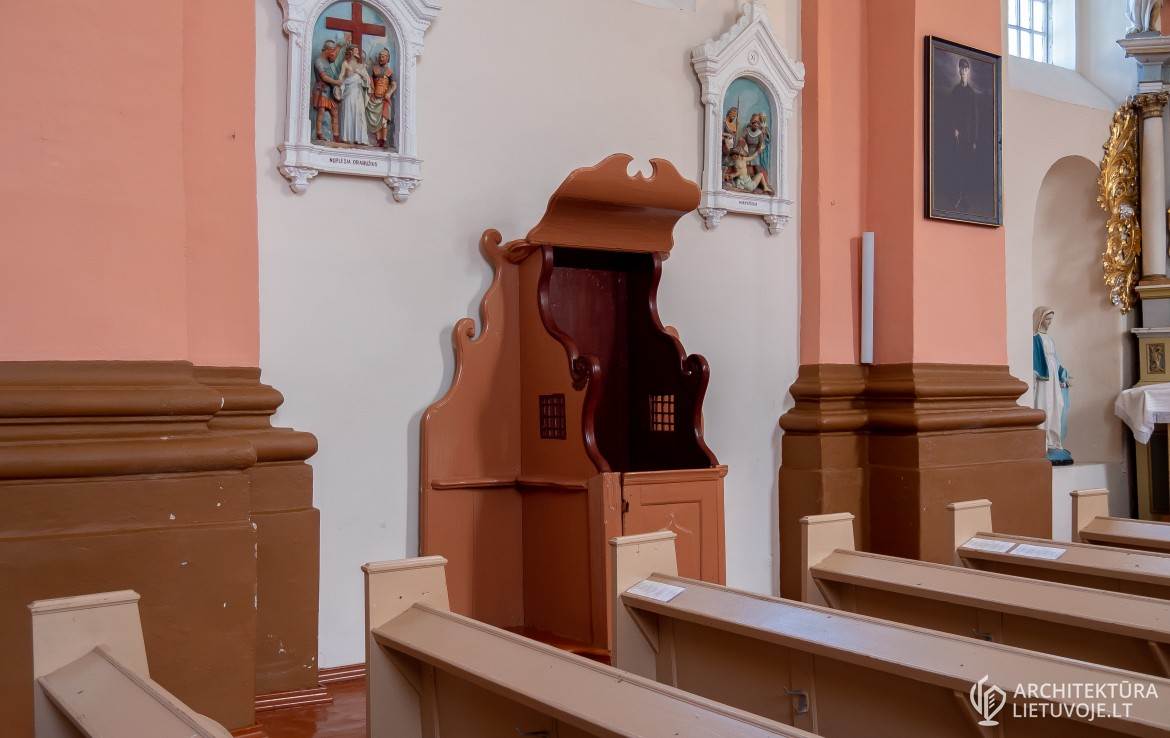 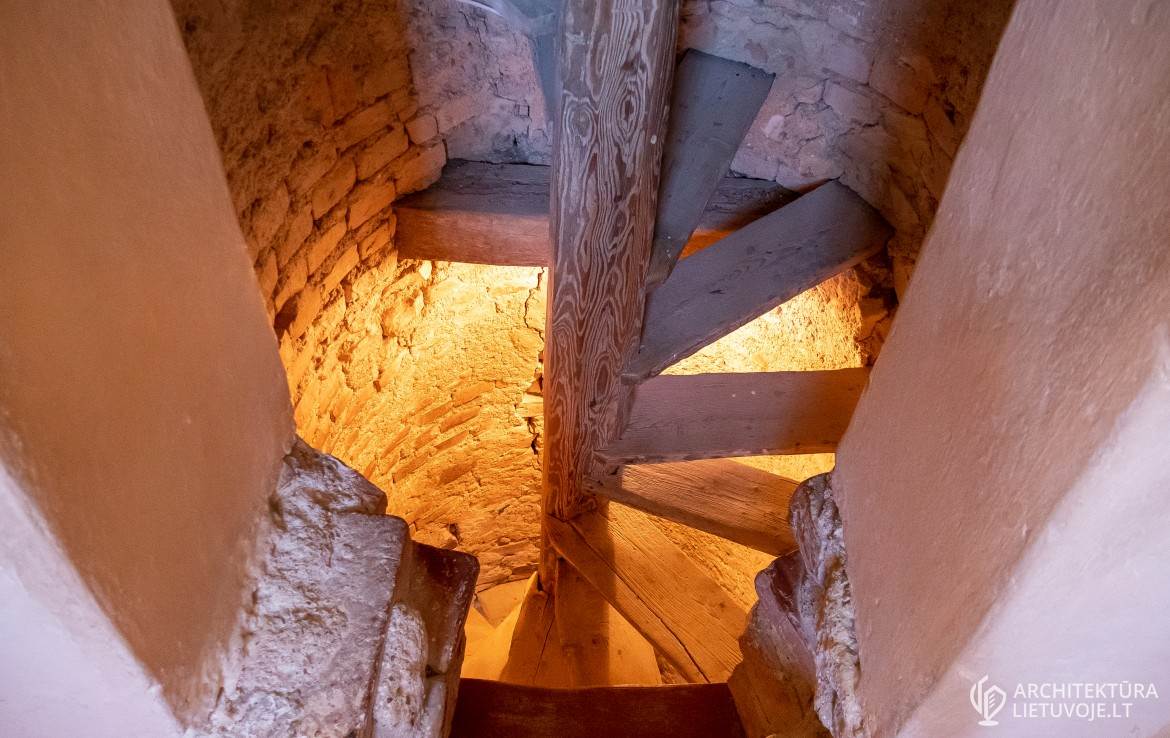 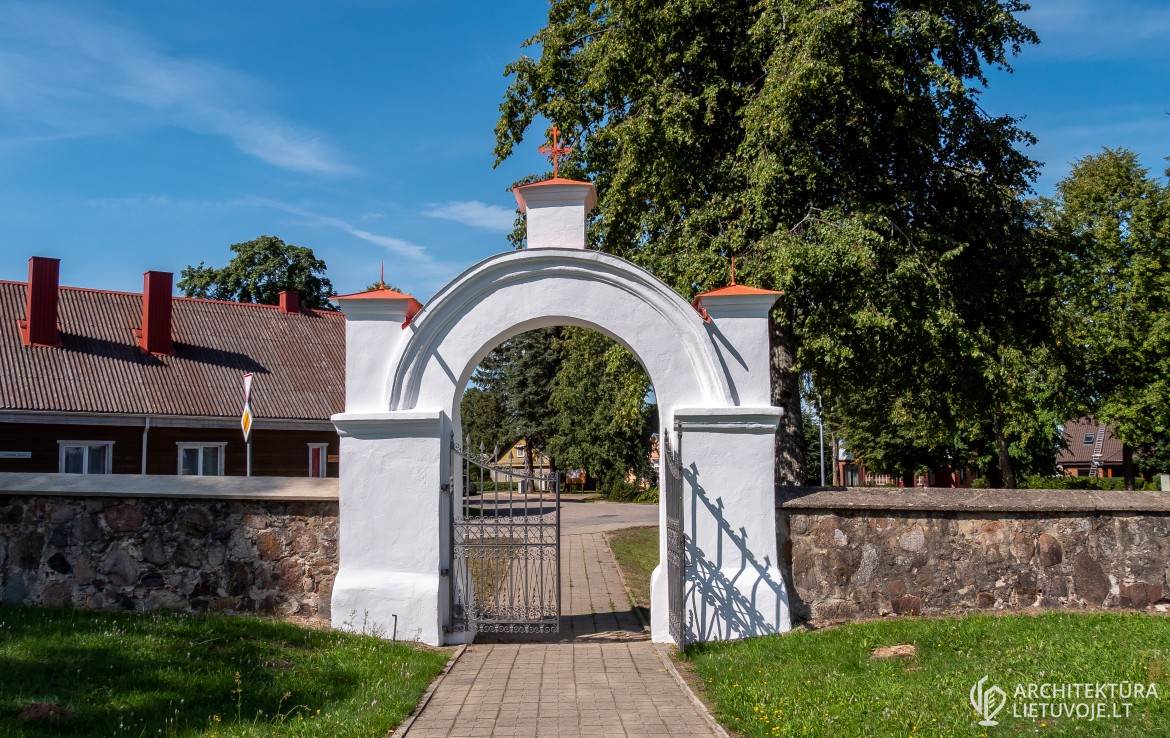 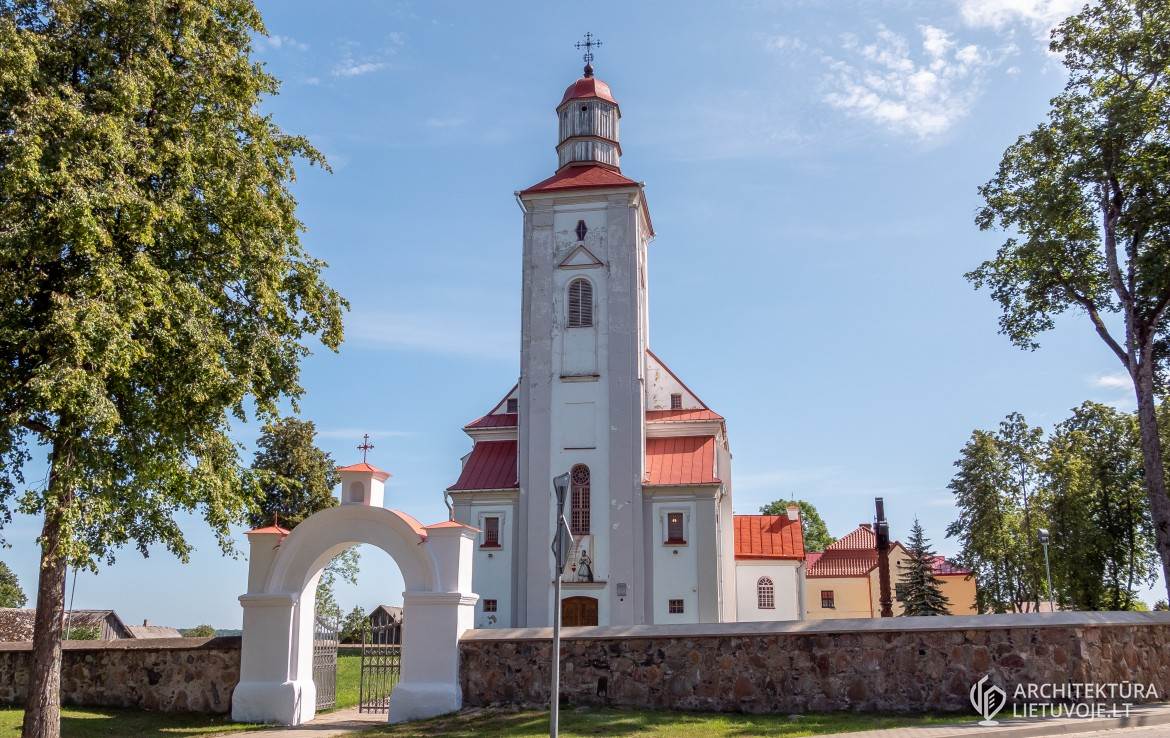