Church of the Holy Trinity, Suderve

Building Complex of the Sudervė Church of the Holy Trinity

Churches of circular plan, inspired by the example of the Roman Pantheon, have been constructed already during the Renaissance. Later on, as the ideas of Classicism spread around the world, a new wave of such buildings began to shake. We have only a few of such churches in Lithuania – one them stands just a few kilometres from the current capital. The church of Sudervė has been constructed by the local landowner on the initiative of the bishop Valentinas Volčackis. The building under construction in 1803 has been completed well after the death of the founder – in 1824. There are several opinions regarding the author of the project for the church – although the prevailing view is that the architect of the building was Laurynas Bortkevičius, the building is still sometimes attributed to Laurynas Gucevičius, one of the most famous classicists of the country, who has been considered its author for several years. There is also one more version, that L. Bortkevičius built the sanctum namely according to the project of L. Gucevičius, who was already dead at that moment.

At the front of the rotunda building we can see Doric colonnade, which is extended in the lateral sides of the building by two staircases on each side and a part of the presbytery and sacristy – colonnade – integrated into the general area. Rectangular pilasters, also visible in the inner wall of the porch, continue the rhythm here as well as support the entablature surrounding the building. The bottom row of rounded window arches here turns into concave niches with the sculptures of the six apostles. Arches of windows and niches of the second row are rectangular; the entrance is also rectangular, decorated only with modest profiled edging. The drum of the dome is visible on the top, which is composed of large windows in semi-circular niches, planes with recessed parts as well as the pilasters of different colouring dividing them. At the top of the dome there is a lantern, according to the rounded forms of the windows of which the cornice on the top as well as the form of the roof is replicated.

Entering the main interior area, visitors are frequently amazed by an abundance of décor – it’s true, the appearance of some of the interior elements has been changed in the middle of the 19th century. Above the pilasters dividing the walls there is an entablature decorated with painting and surrounding the church area; illusory ceiling rosettes are painted on the inner side of the pillar arches. The most impressive part of interior decoration is the dome, where we can see illusory ceiling rosettes in the painted caissons. The painted composition “Coronation of the Blessed Virgin Mary”, from which descend the floral decoration strips widening towards the bottom and dividing the dome, is on the top of the dome. Illusory cornices of the windows of the drum here are complemented by other painted elements – the garlands connecting them, sitting eagles as well as the little angels that fill the gap between the windows and the supposed cornices.

The space is surrounded by two small galleries, the lower of which leads to the organ choir and, unlike the upper one, extends only over half the perimeter of the building. There are expressive classicist altars in the sanctum; the greater two-section altar with a small gallery on the second floor is especially wonderful. The great altar, four sculptures of evangelists visible inside, and, supposedly, the ones outside have been created by Ignotas Gulmanas, who was probably responsible for the decor of the Chapel of the Gates of Dawn as well. 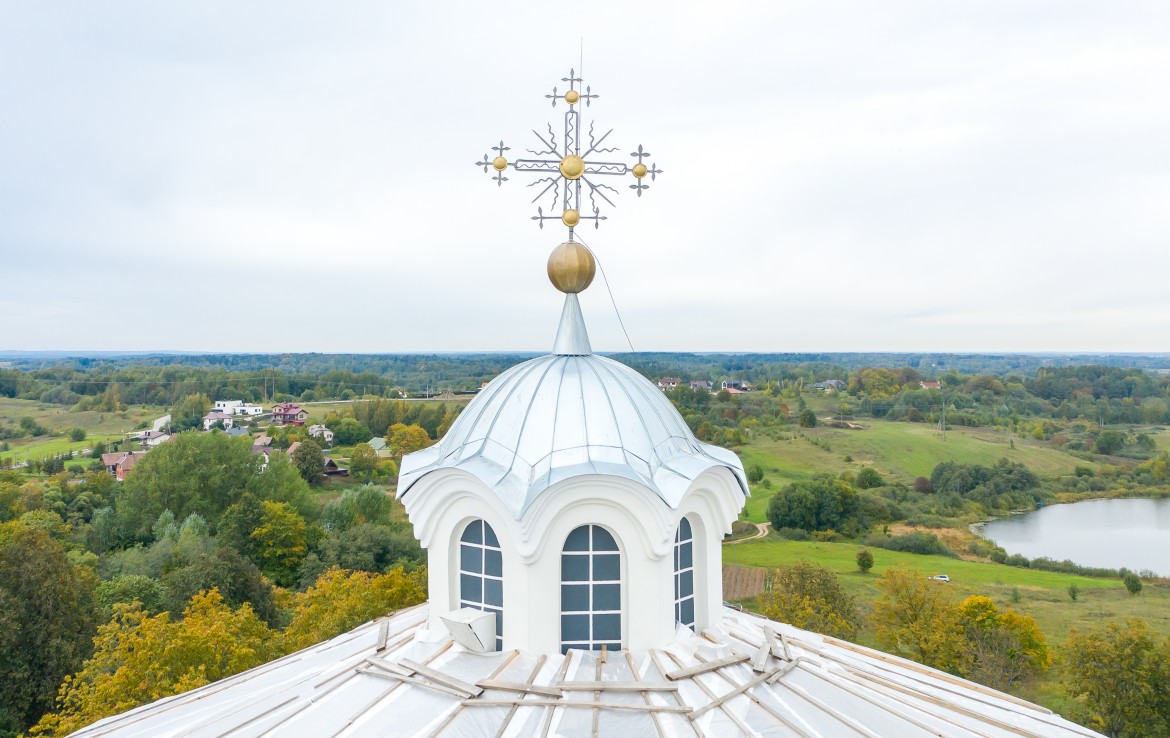 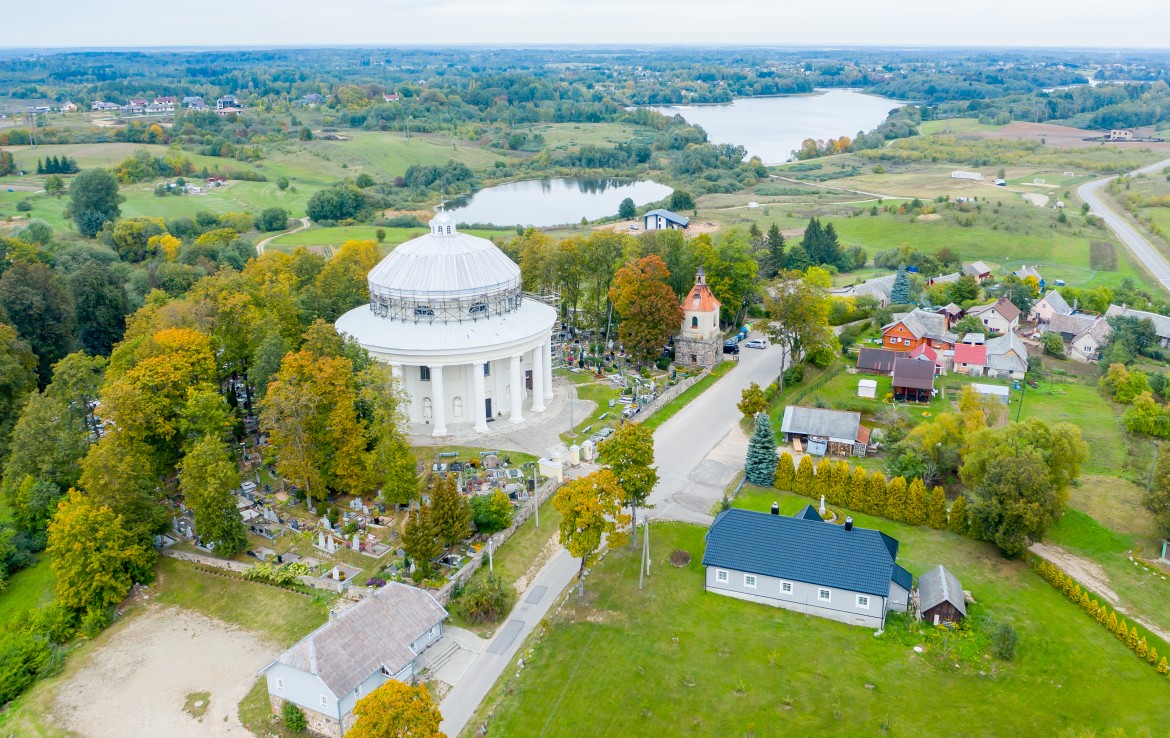 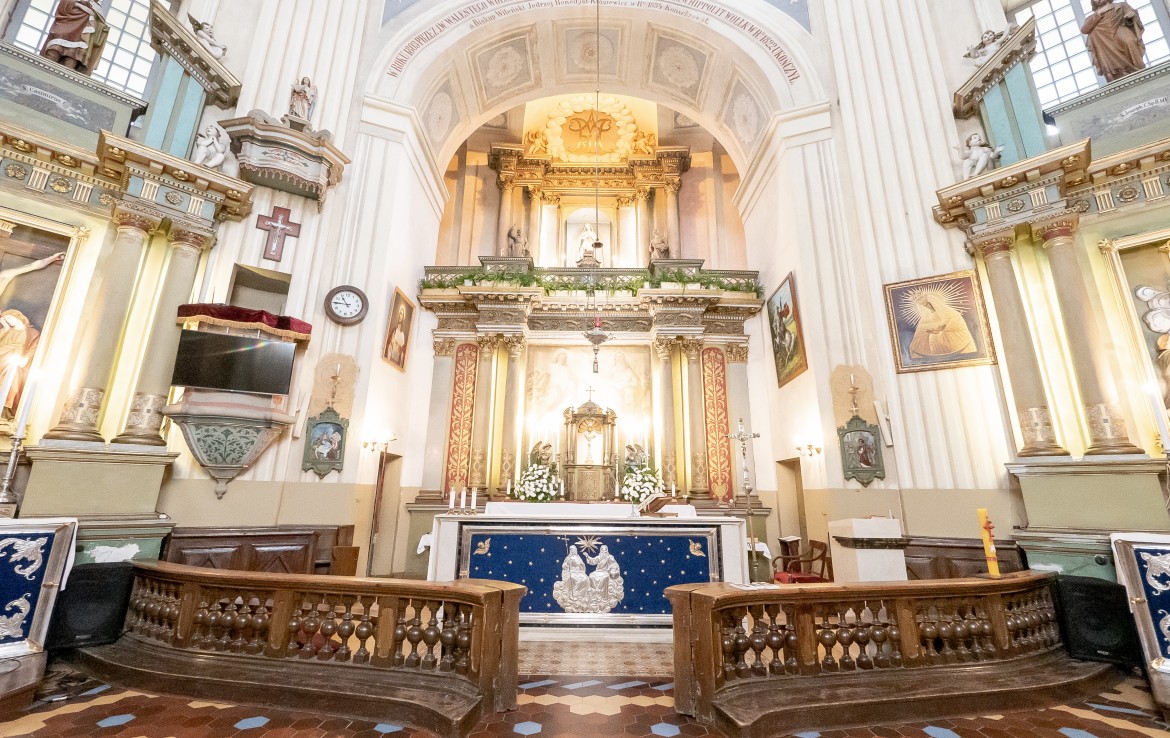 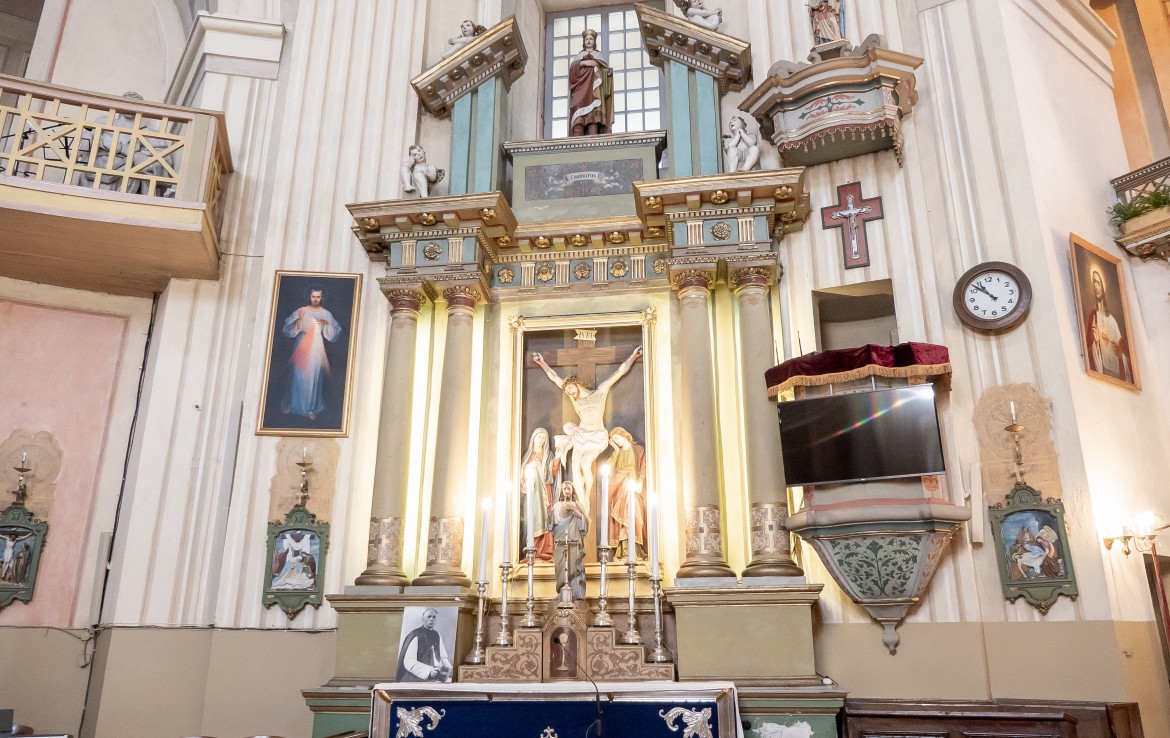 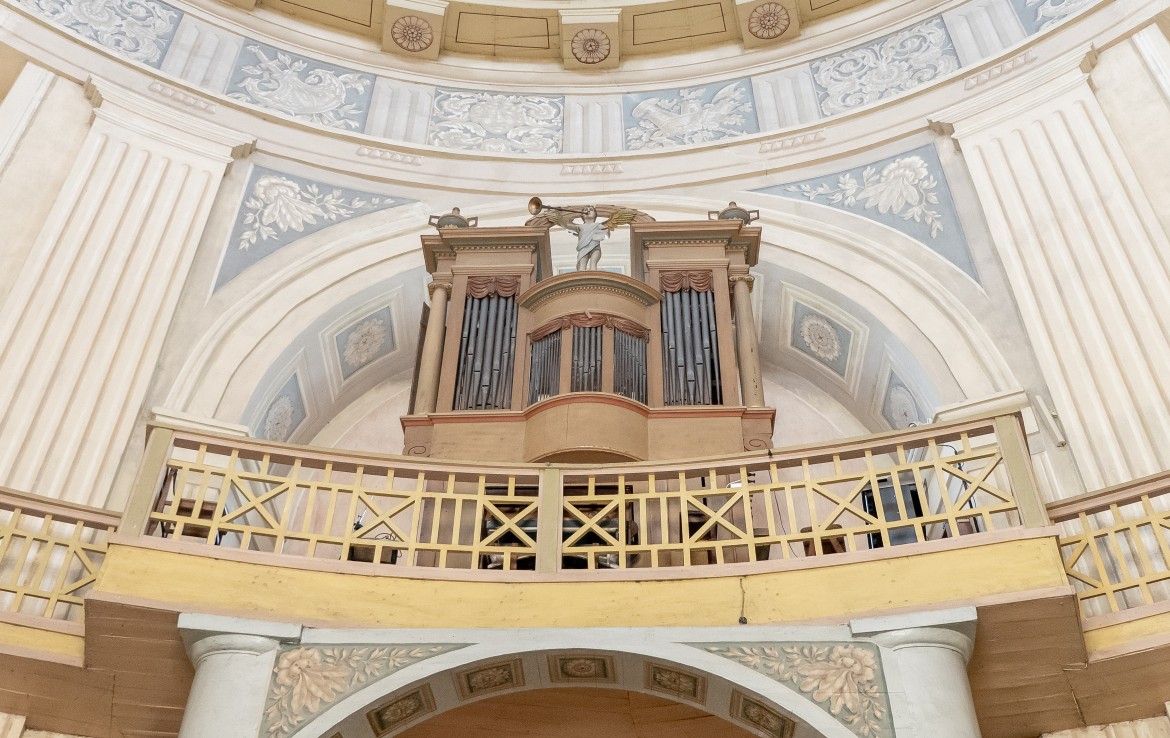 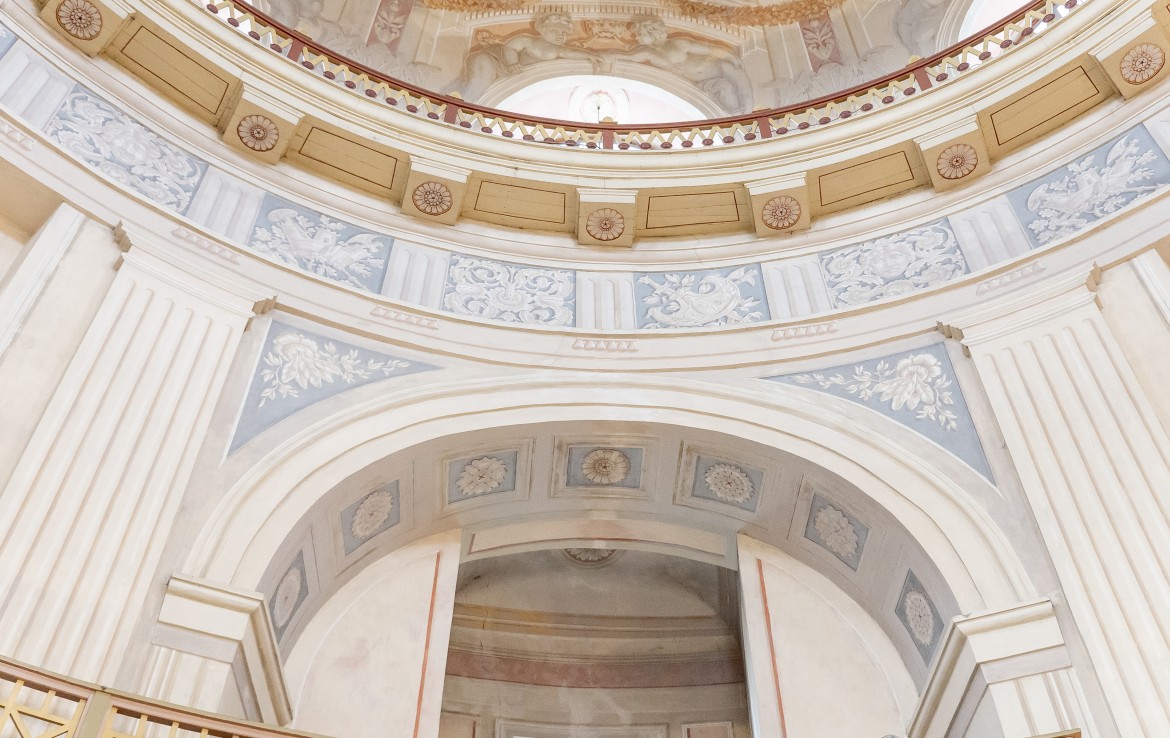 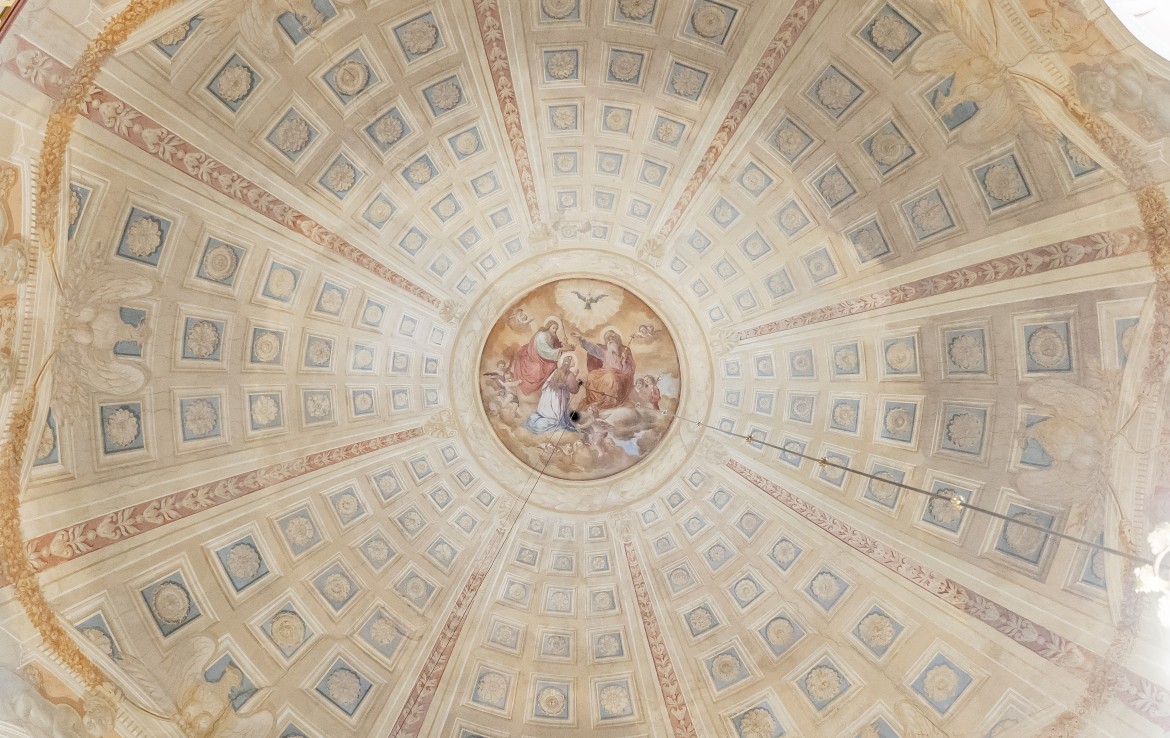 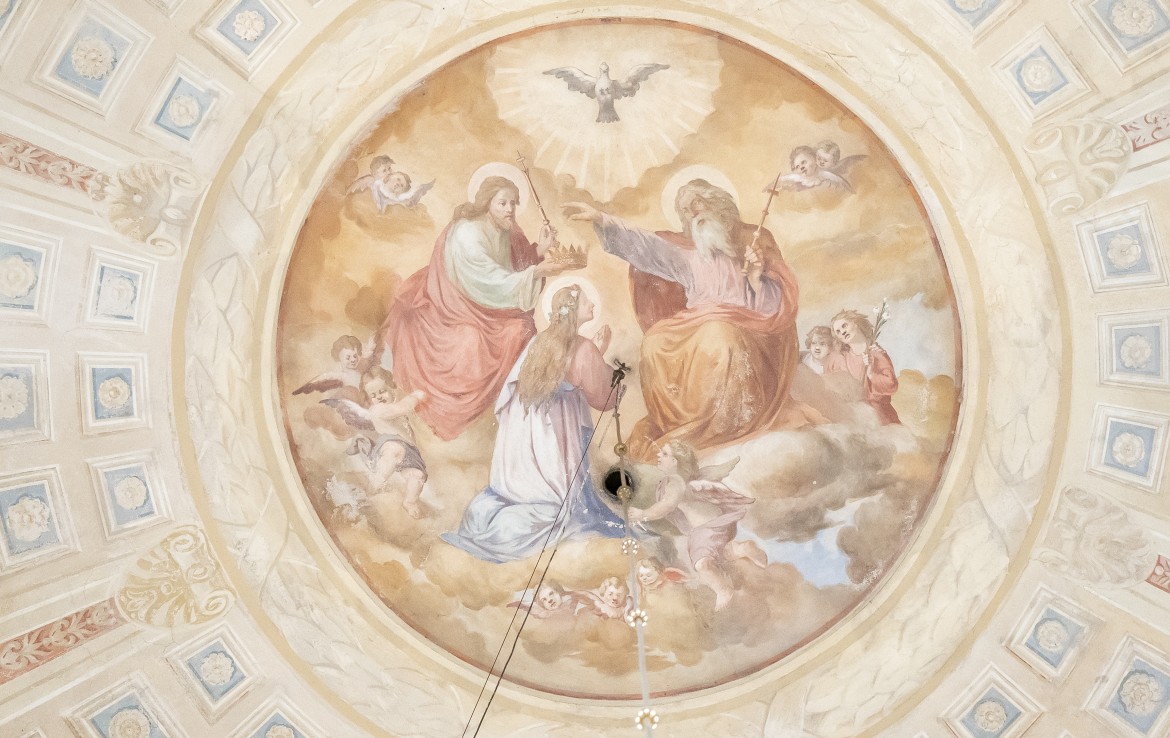 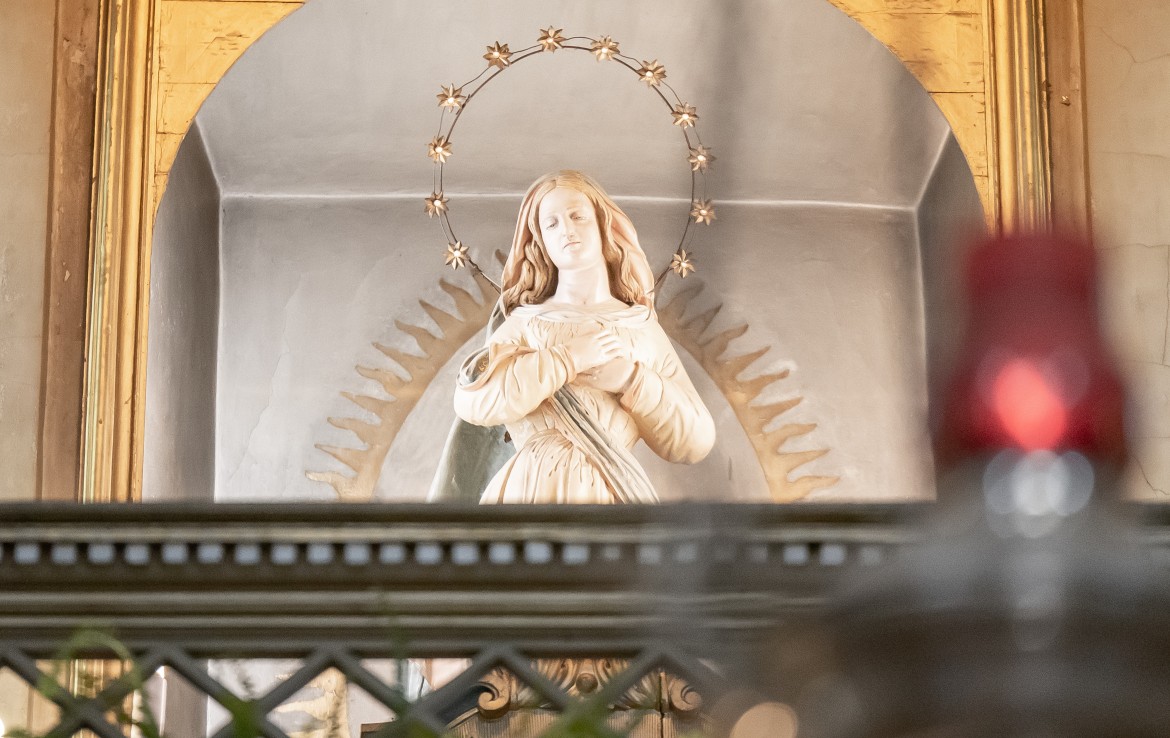 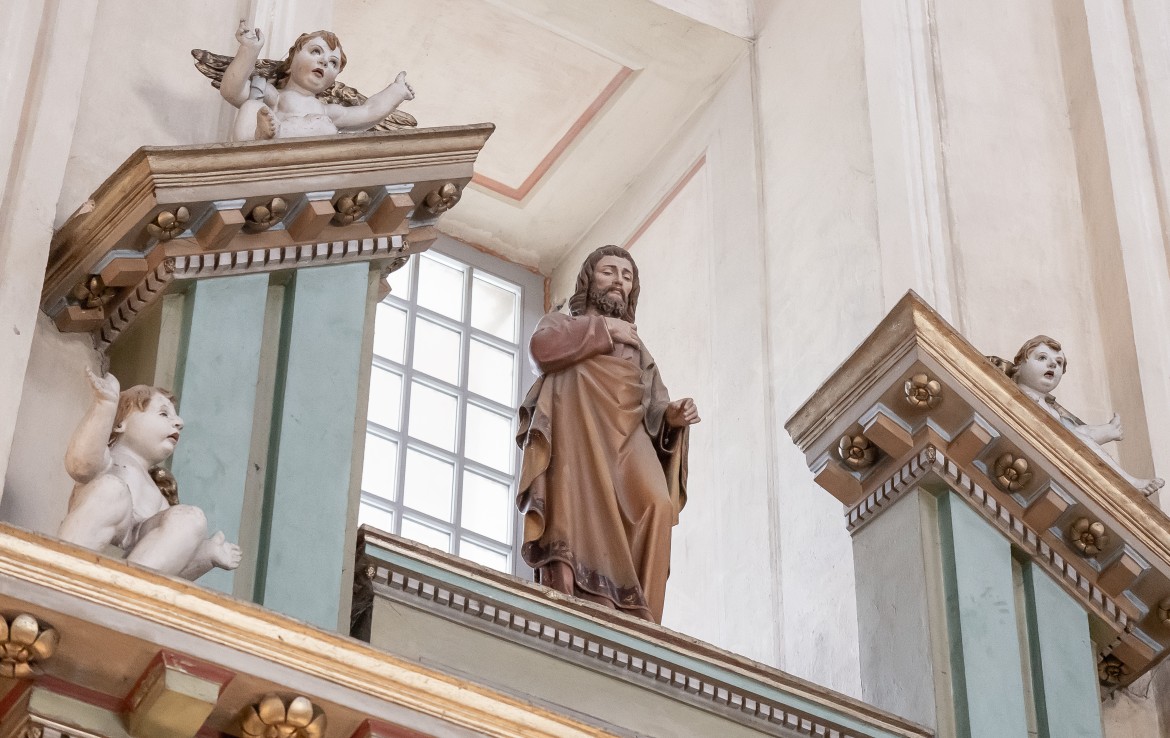 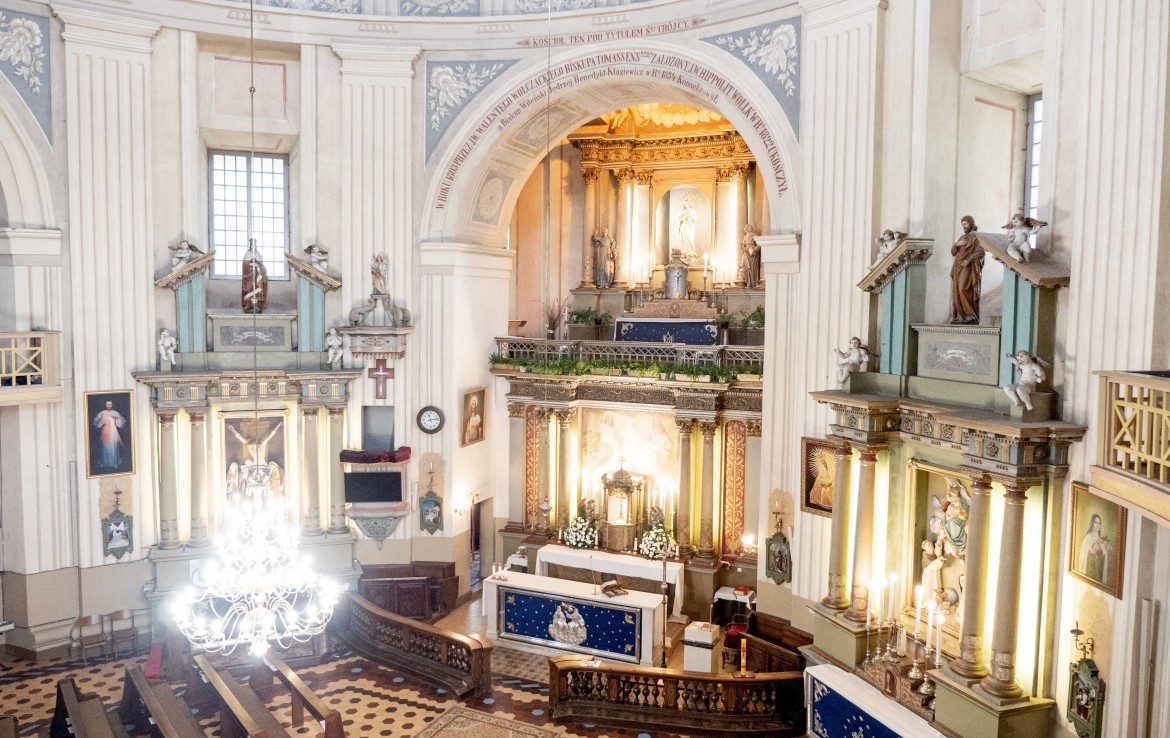 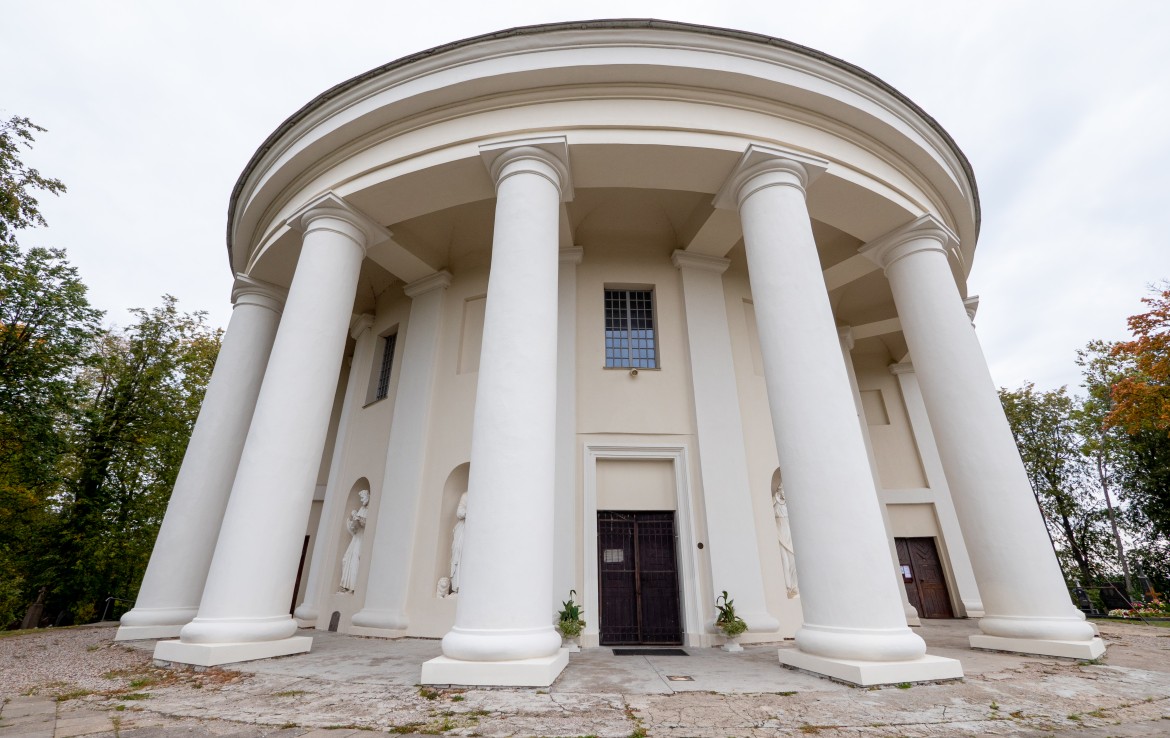 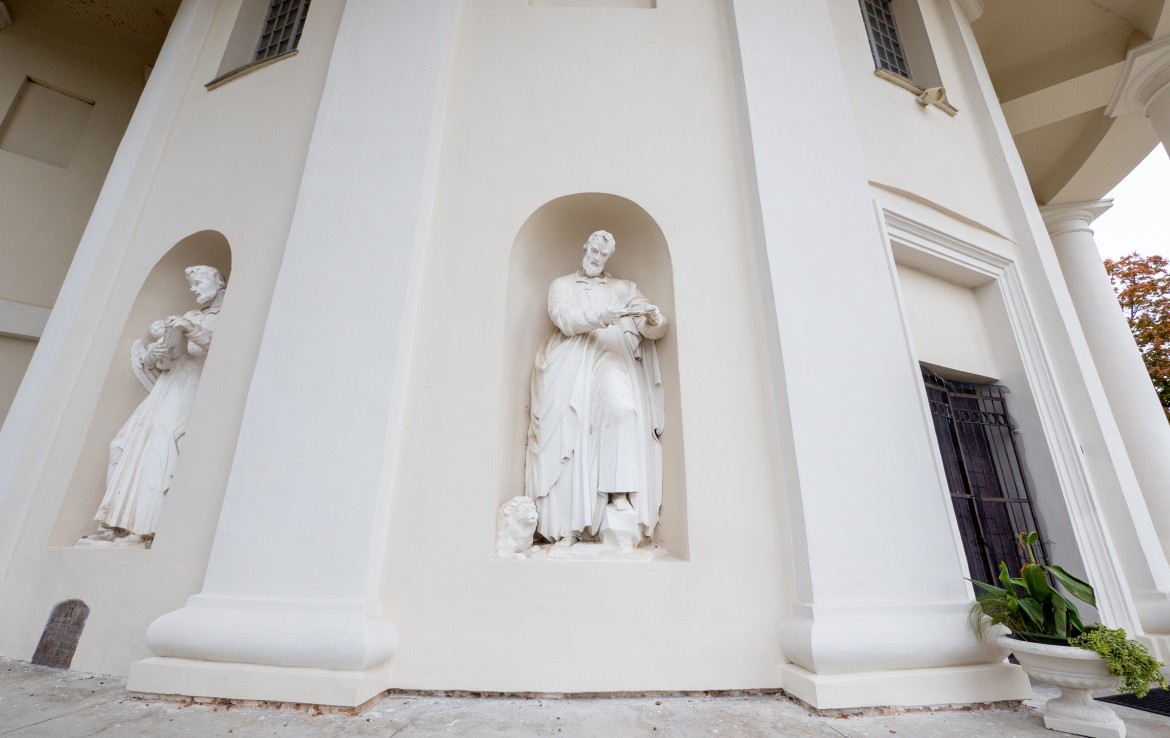 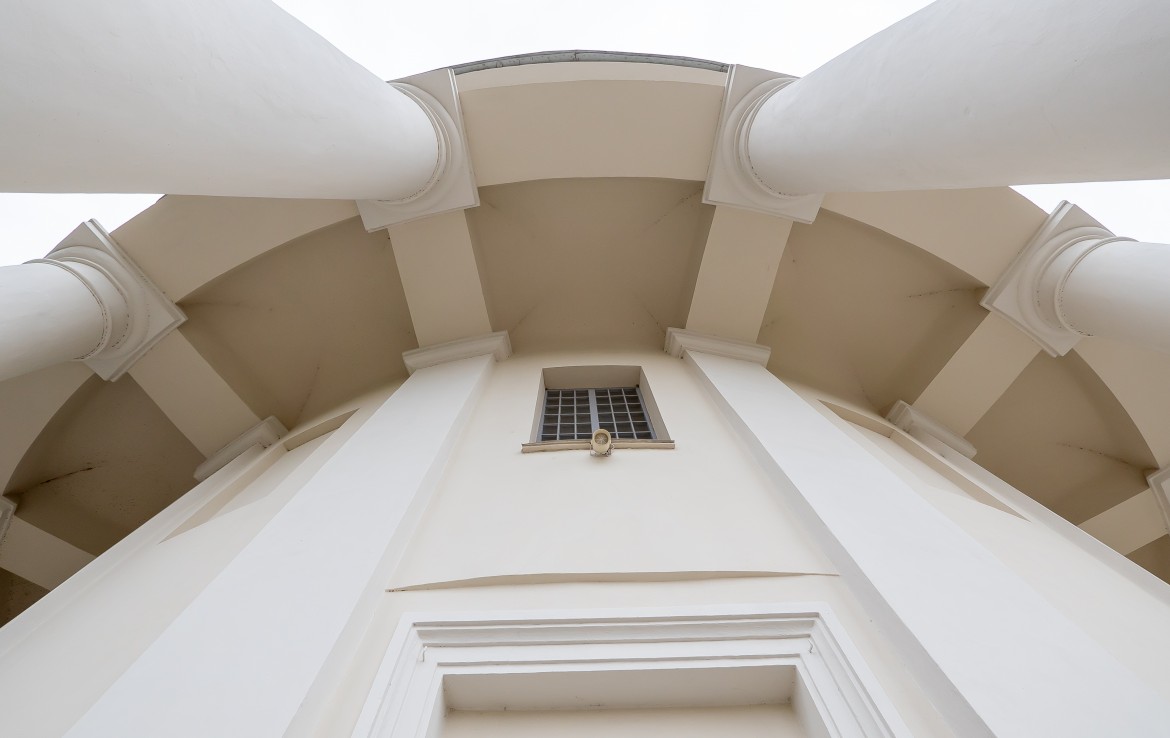 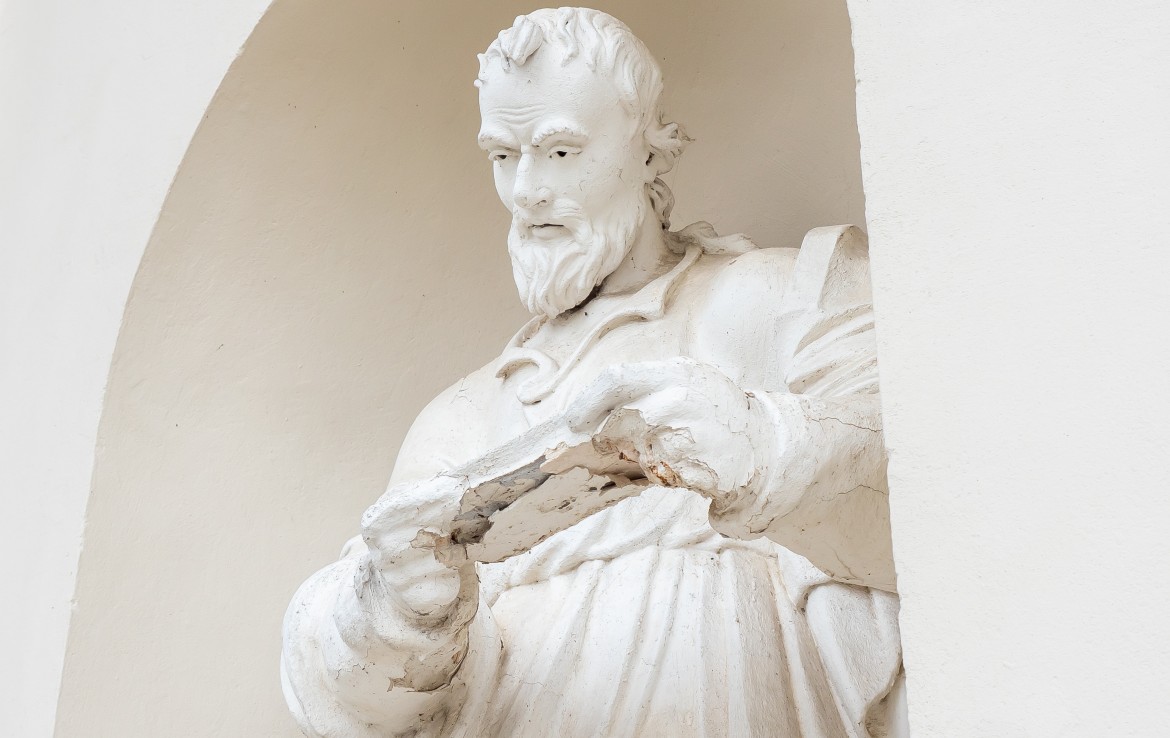 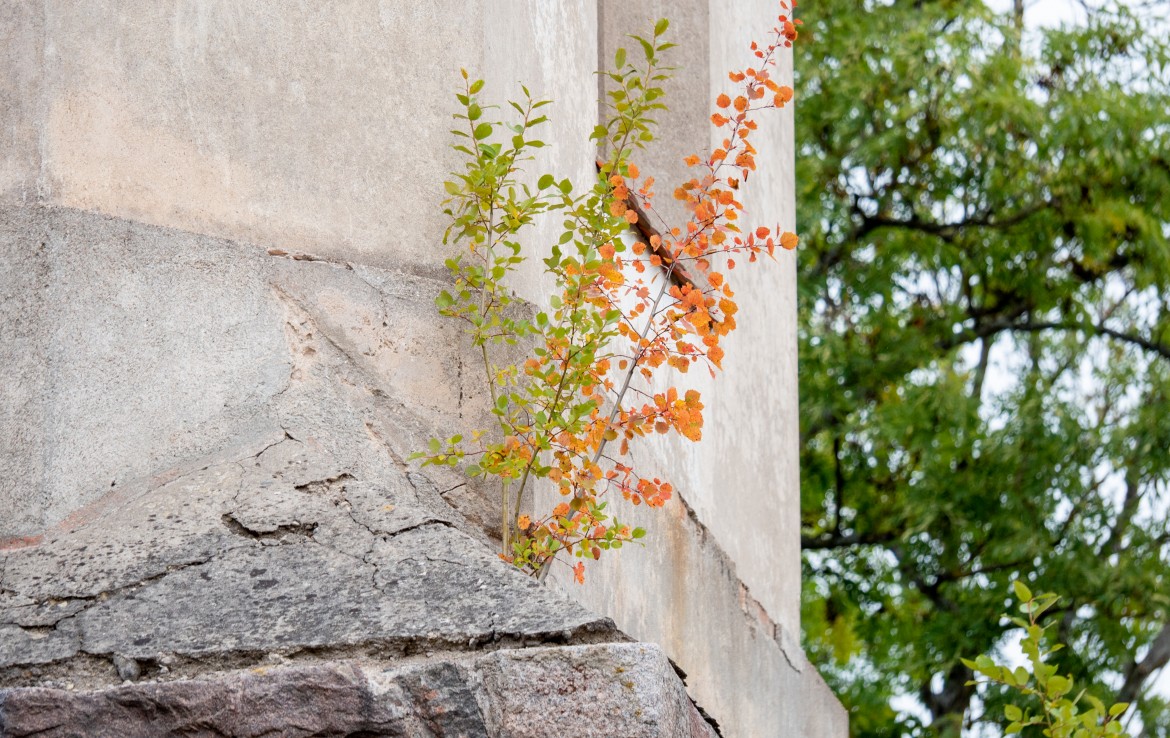