The Building Complex of Stakliškės Church of the Holy Trinity

Only ten kilometres away from the impressive Jieznas Church, another pair of twin towers of late Baroque emerges in the skyline. This is Stakliškiai Church of the Holy Trinity, built between 1765 and 1776 on the initiative Juozapas Teodoras Boufalas, the head of the eldership. Next to the main volume of the single-nave church, which is narrow in comparison, at the sides, tall three-tier towers are bricked – the church’s proportions accentuate verticality. On the facades of the church, the Ionic Order is used abundantly, which can be seen on both side pilasters of the towers and in the columns of the massive portal, running along two storeys. The latter ends on the top with an interrupted triangular pediment, in the recessed part of which one can see a tympanum, decorated with a relief composition.

Behind of it, a massive tall pediment of two tiers rises having much more dynamic forms, the lower part of which takes up almost entire area between the towers. This also consists of two planes set up on different level. On the sides, the columns, set up in the first plan, surround the recessed central plane, accentuated by the pilasters, and hold the side fragments of the upper tier of the pediment that end with a broken recessed central part. Such a composition of the pediment is even more enriched by the motifs of volutes protruding at the sides. The convex upper tiers of the towers, surrounded by the volutes from the corners are slightly reminiscent of those from Jieznas, still the broken form is granted to them by the outer pilasters, while the profiled cornices reiterating this form make the tiers quite “heavier”.

The volume of the church is crossed by the transept, providing the church with a cross plan – both the edges of the transept and the sides of the five-walled apse are accentuated by the doubled pilasters, which are connected on the top by extremely wide, solid, stylized Ionic capitals. The inside space is narrow, still tall – such a solution caused the inside of the temple being sufficiently illuminated. The church is increased from the inside even more by the domed vault, which creates the monumental impression when rises above the intersection of the transept and the nave. In the interior, there is almost no pictorial decor – modest ornamentation unfolds here through the elements of stucco works. The most impressive are the capitals of the Ionic pilasters, large, broken entablatures and their cornices, the ornamentation of the Baroque pulpit, the baptistery and altars.  On the second tier of the High Altar one can see a so-called glory, decorated in the solar motif and characteristic of Baroque period.

The modest massive main gate of the churchyard, likely to have appeared at a similar time is in contrast to the slender forms of the church – an assumption should be made that its appearance has changed. Charming, having modest Baroque forms, is a smaller gate on the periphery, reminiscent of little chapels. It is concave on the side of the churchyard, thus forming a specific inner space. The pilasters of elementary forms on their edges are inter-connected by the small profiled cornices, reiterating the convexity of the arch. 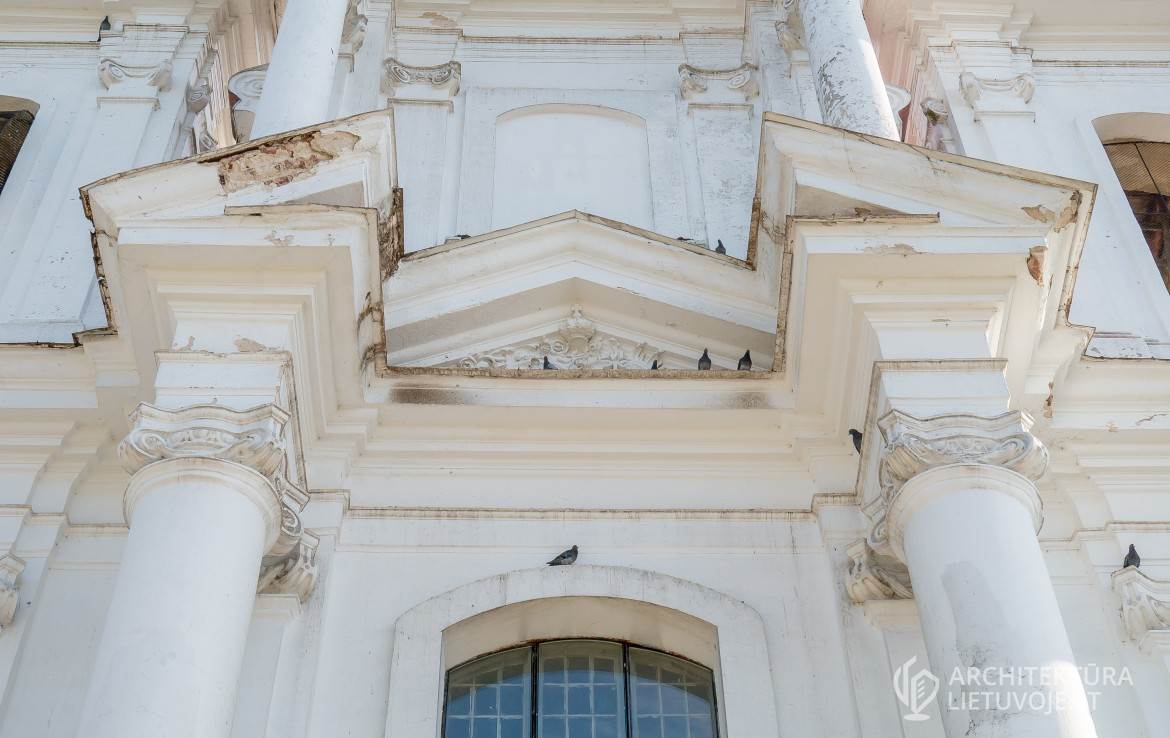 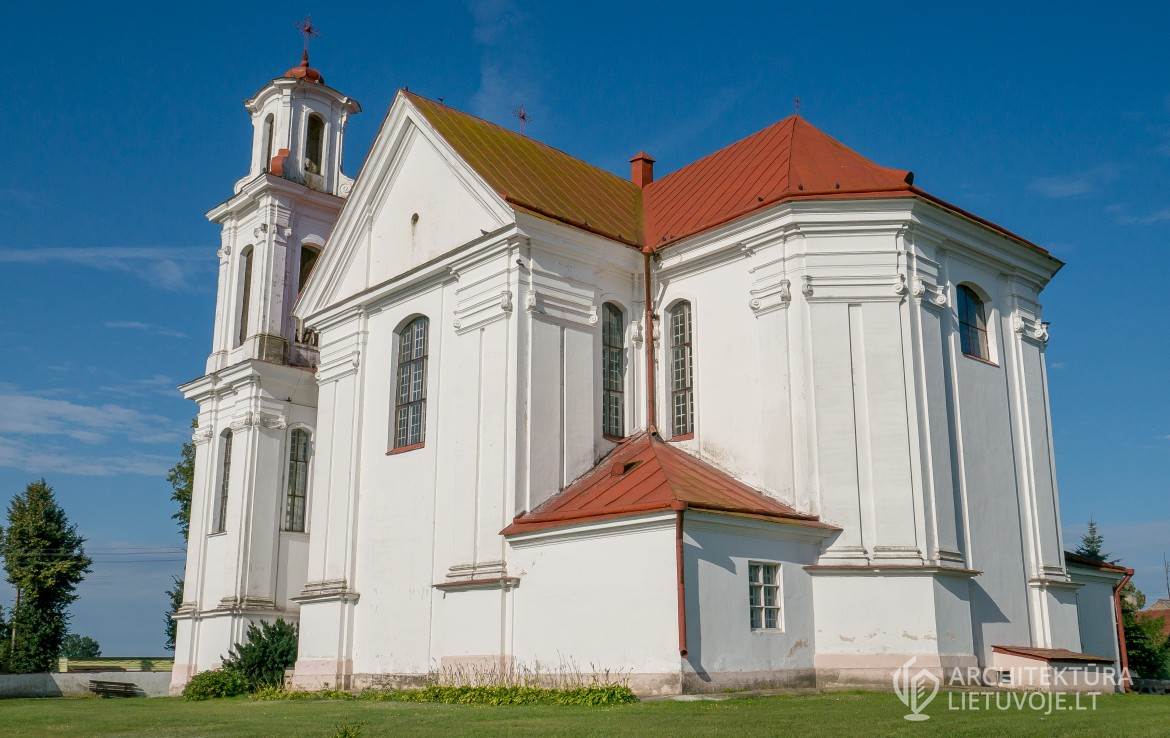 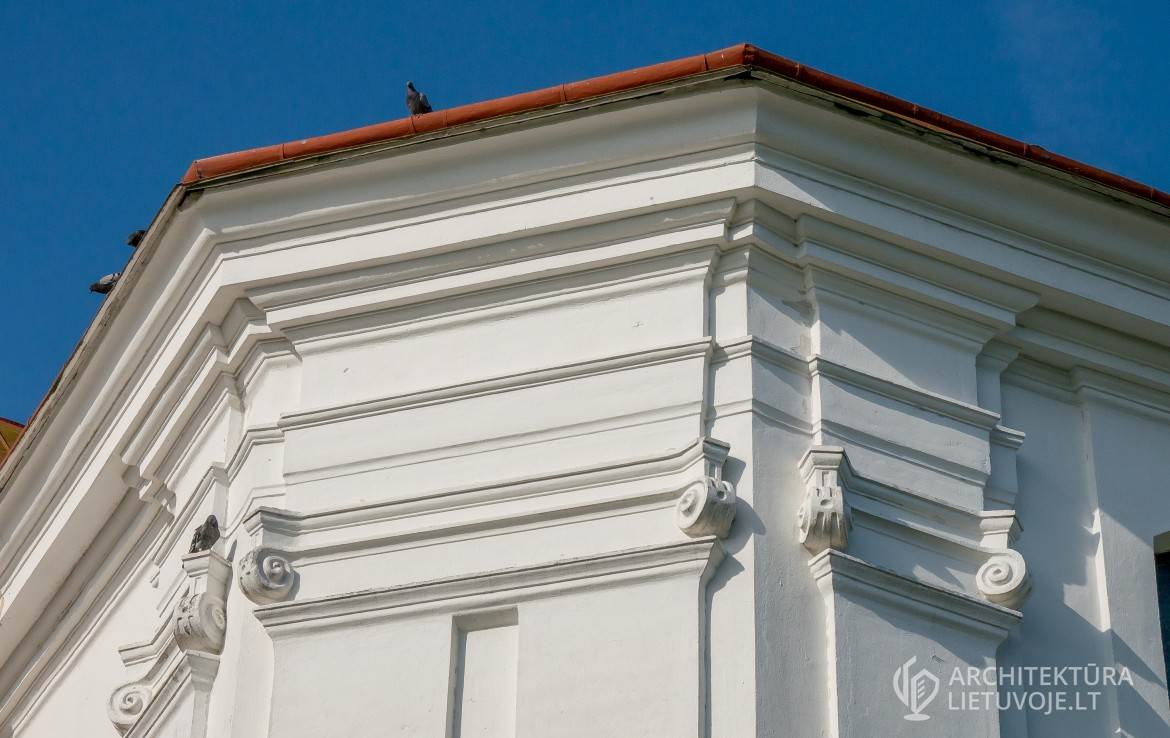 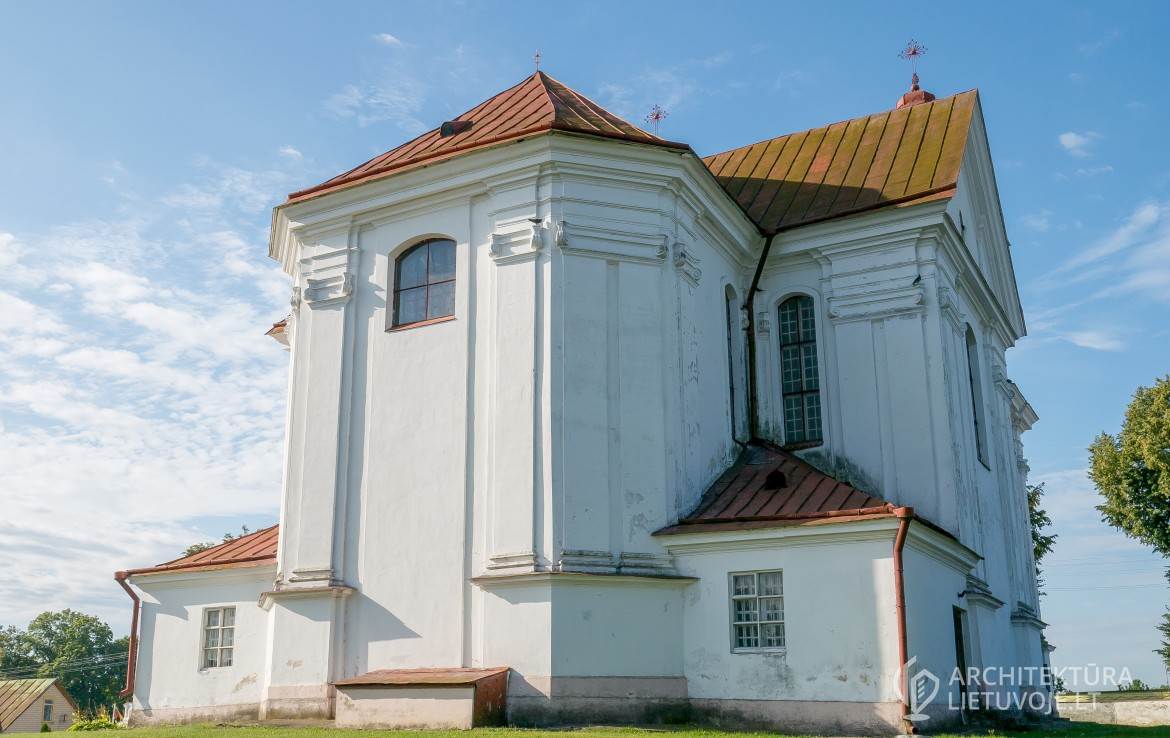 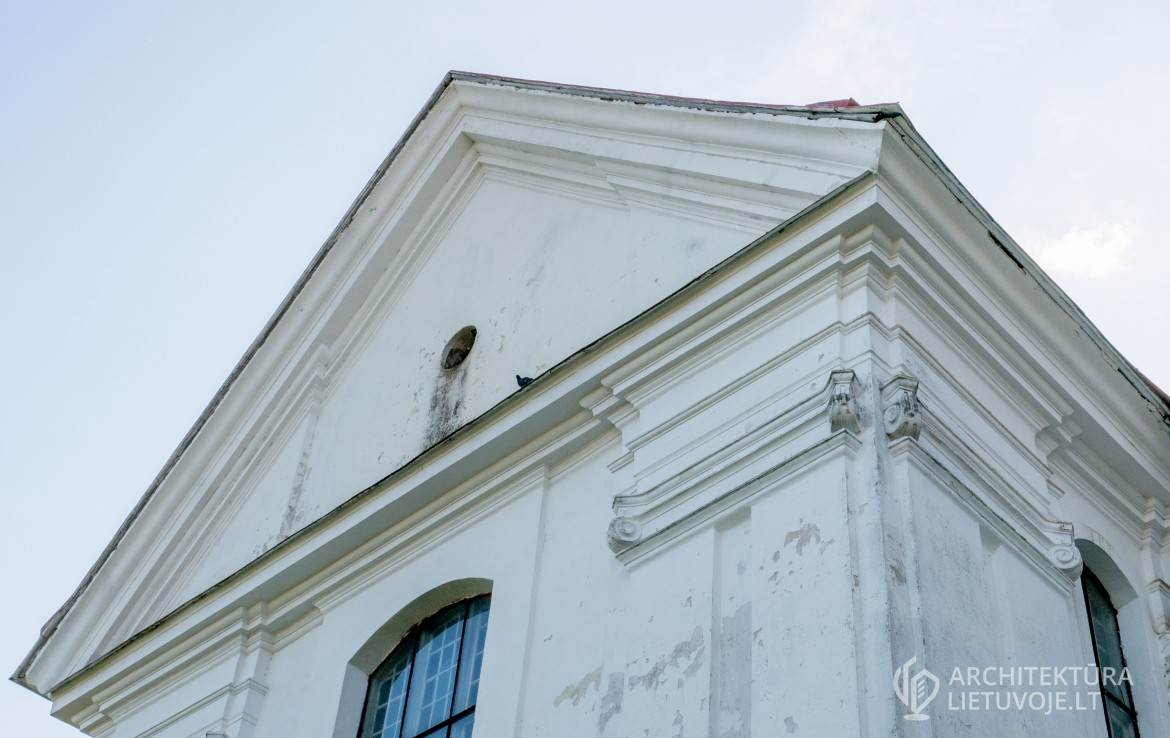 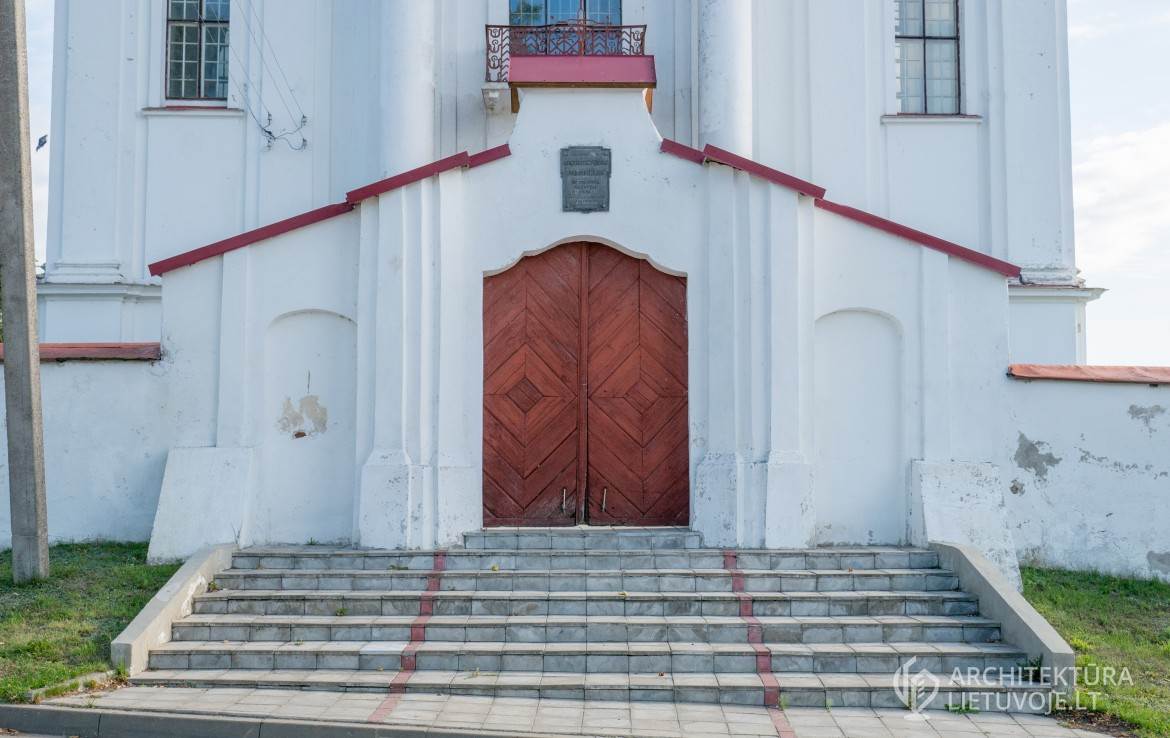 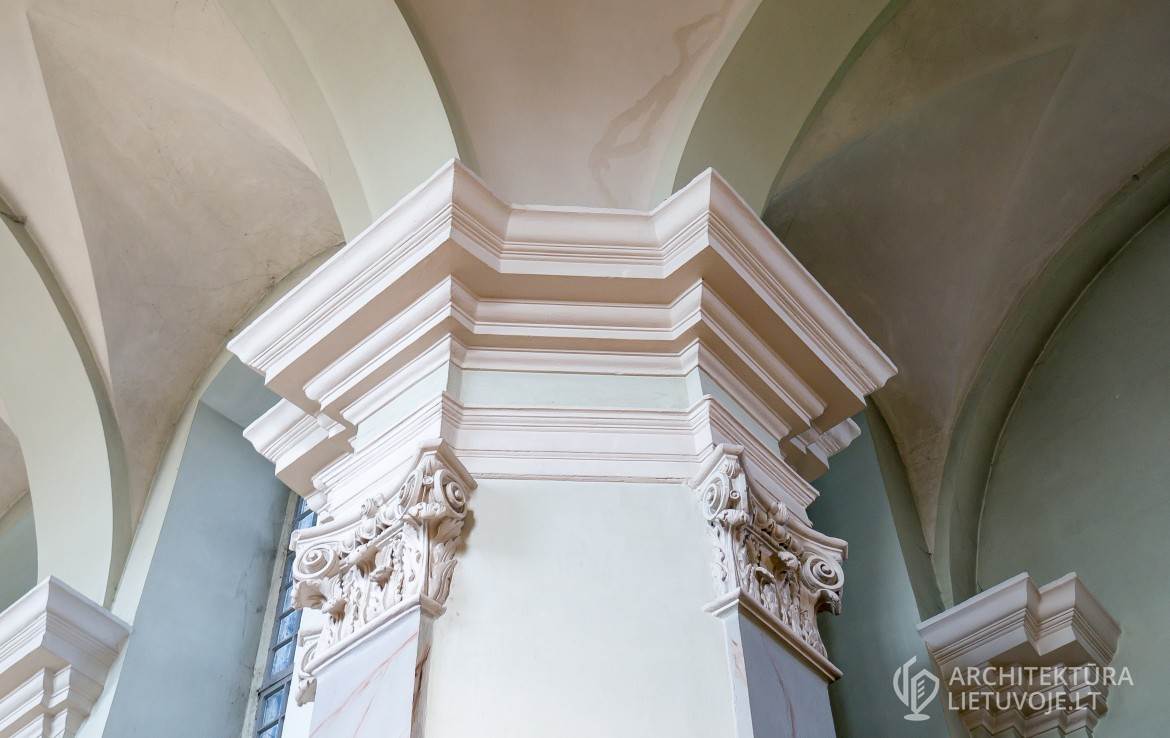 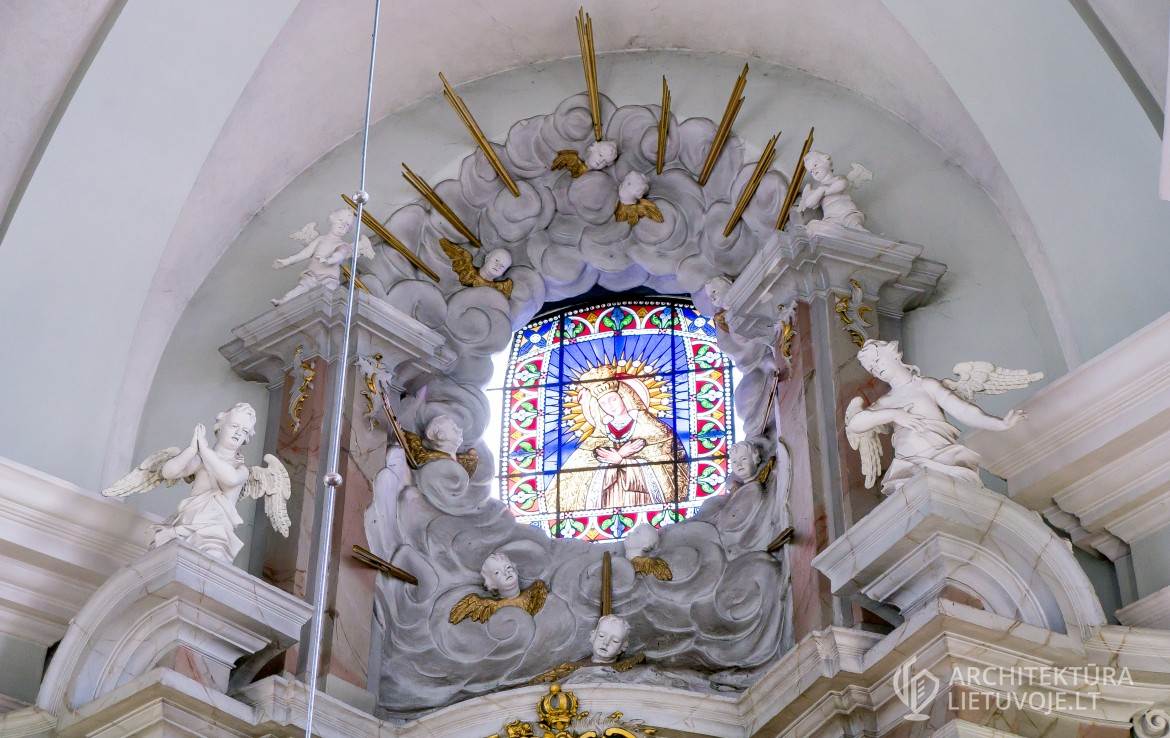 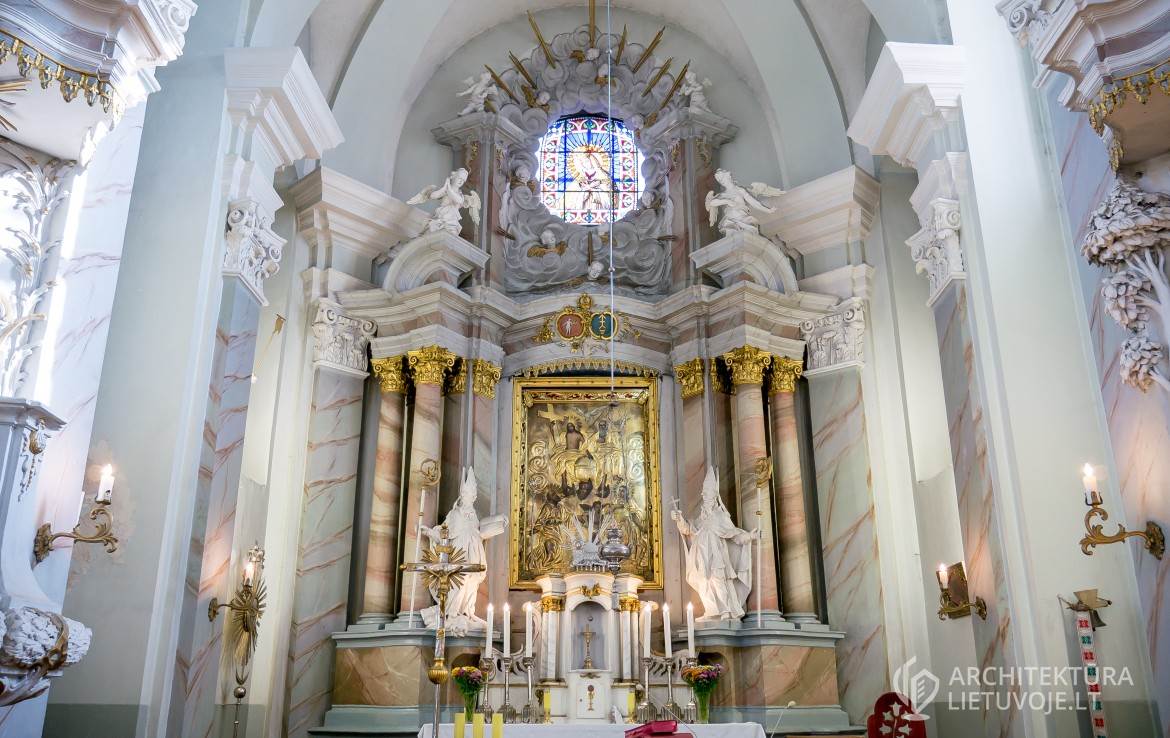 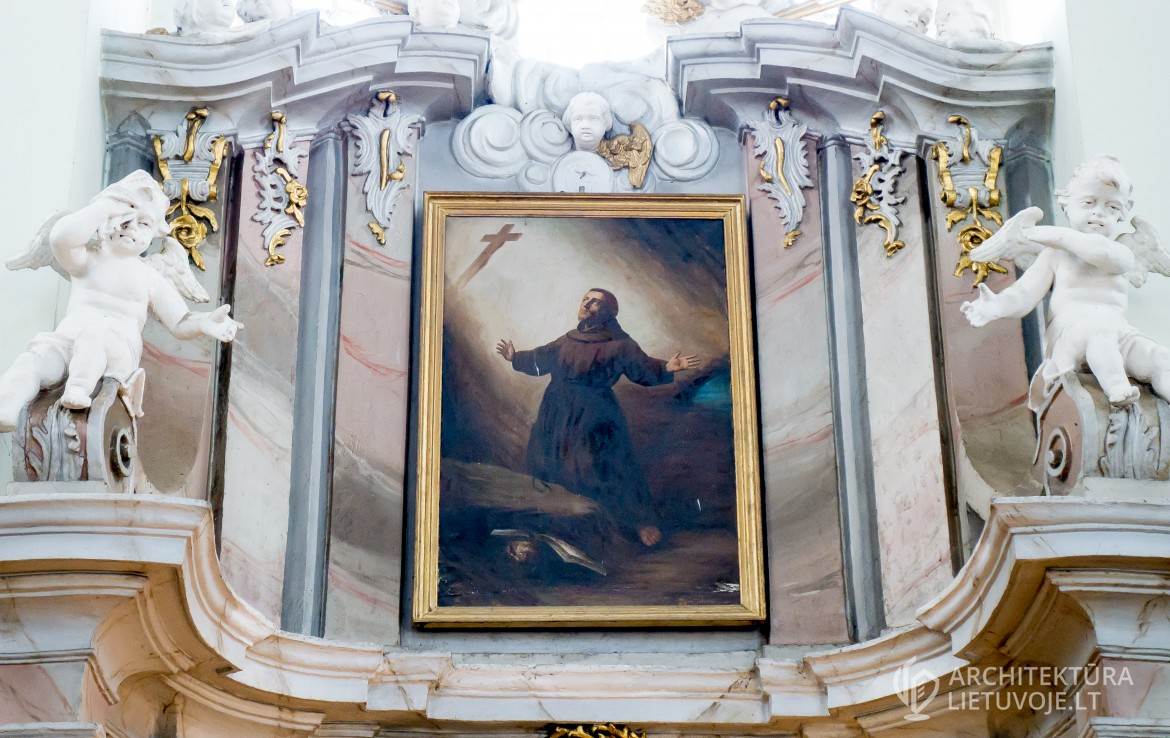 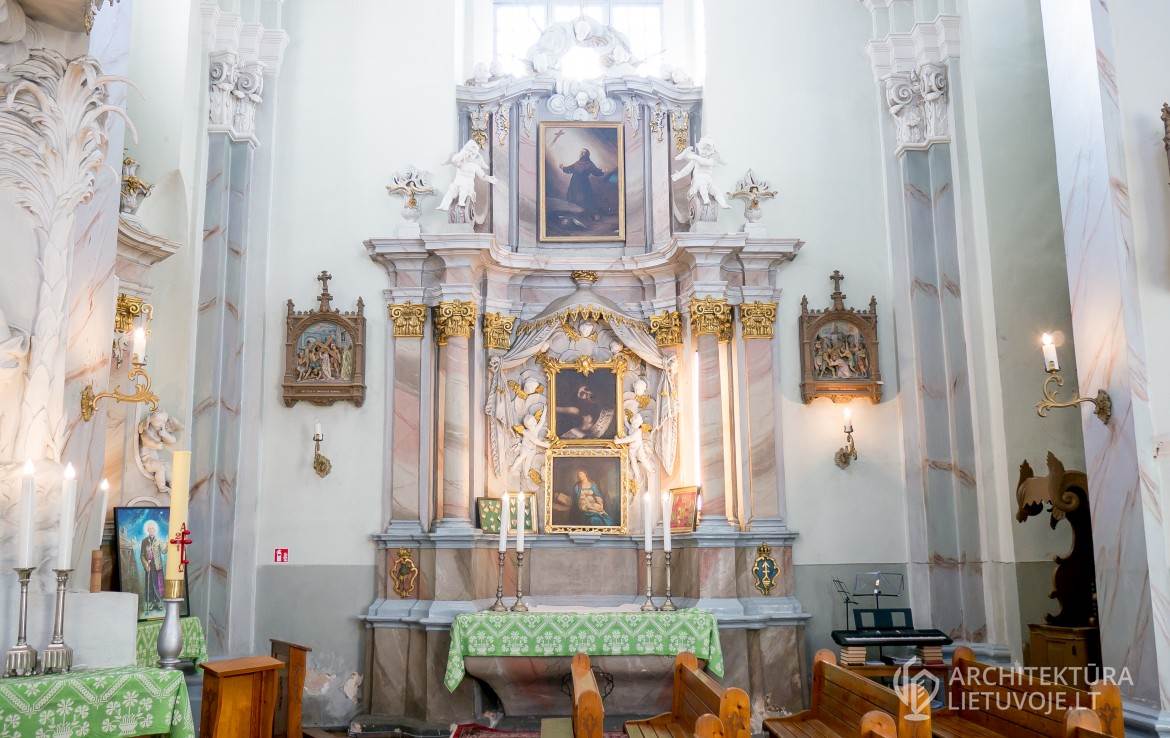 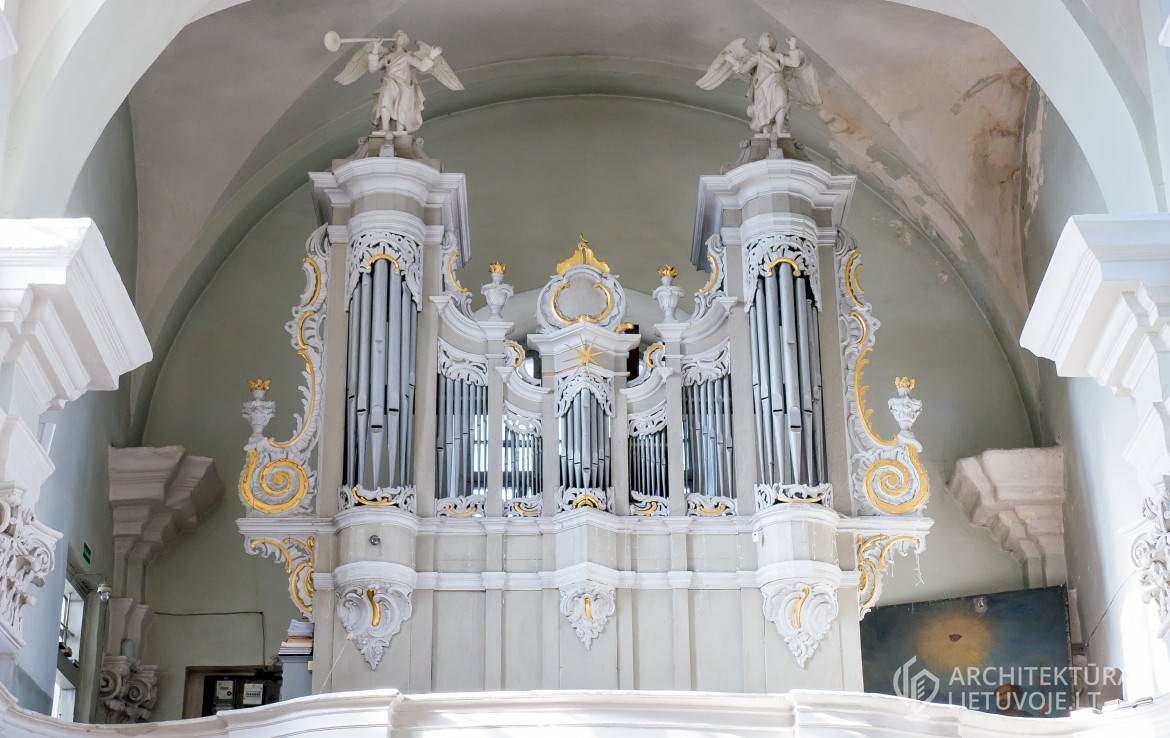 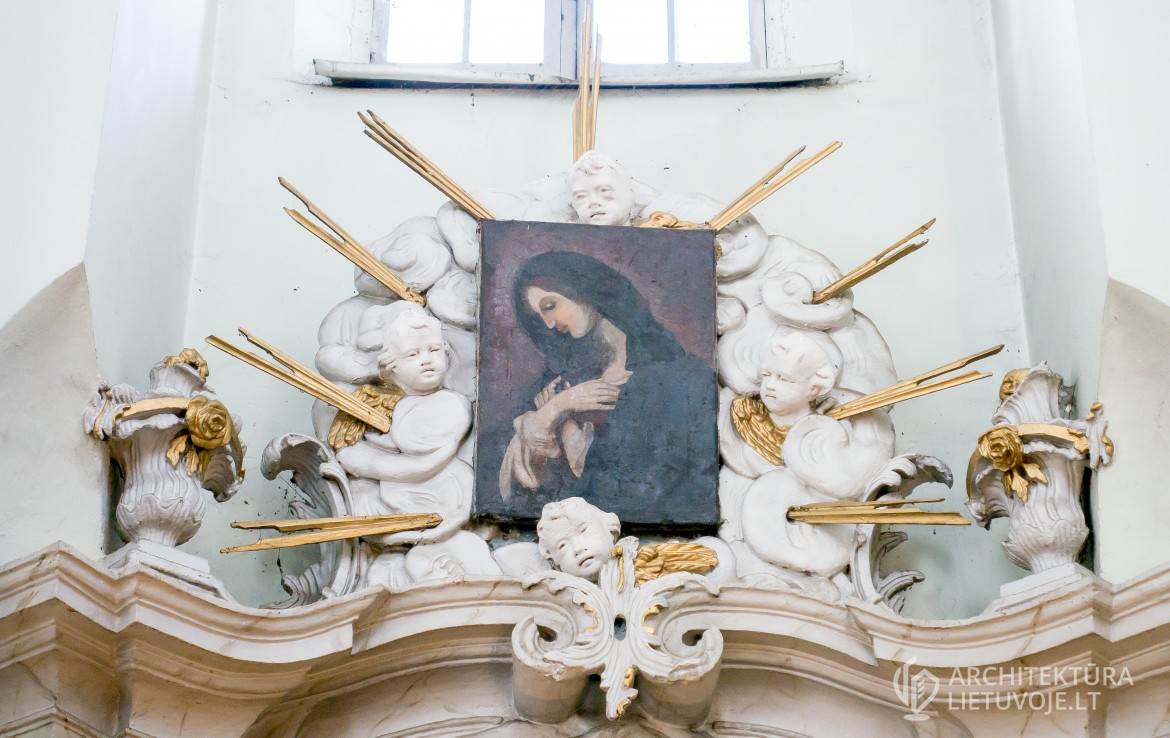 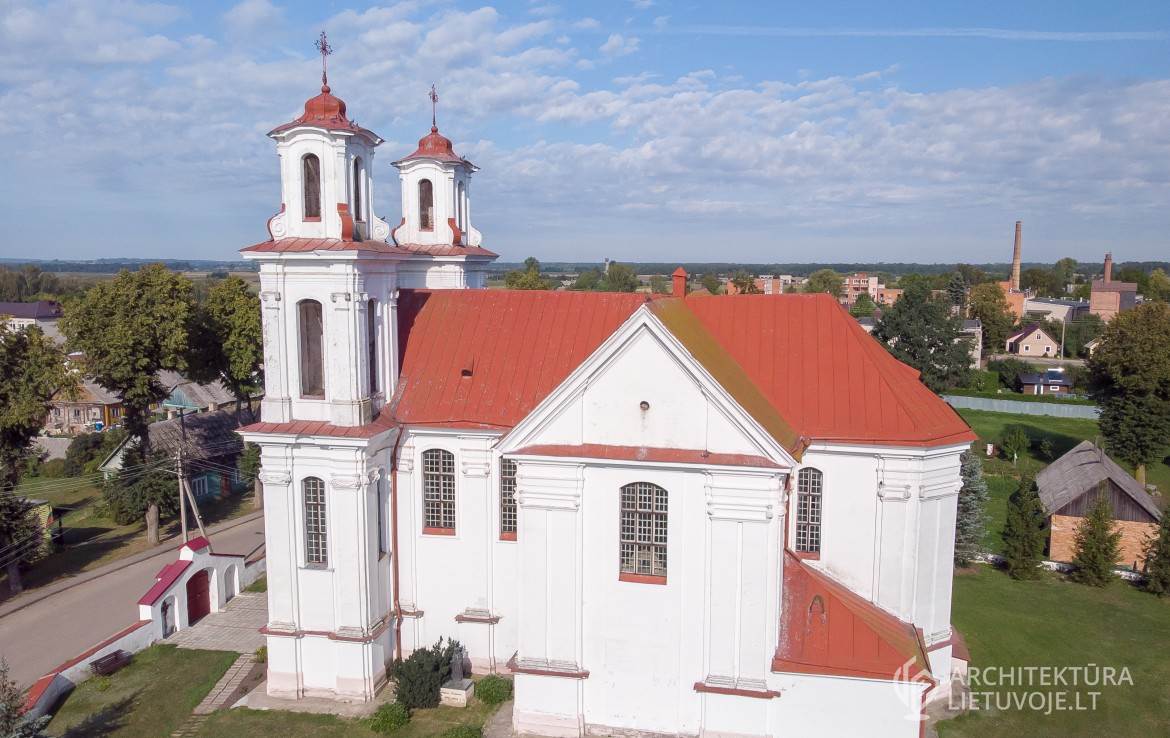 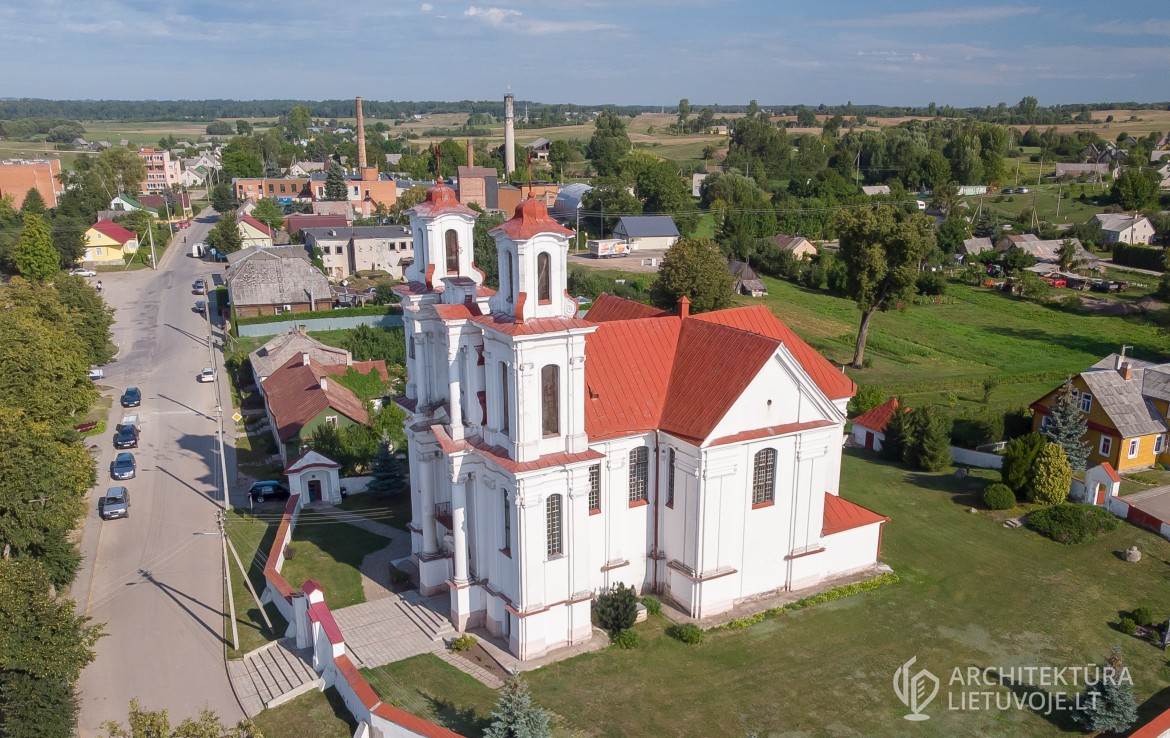 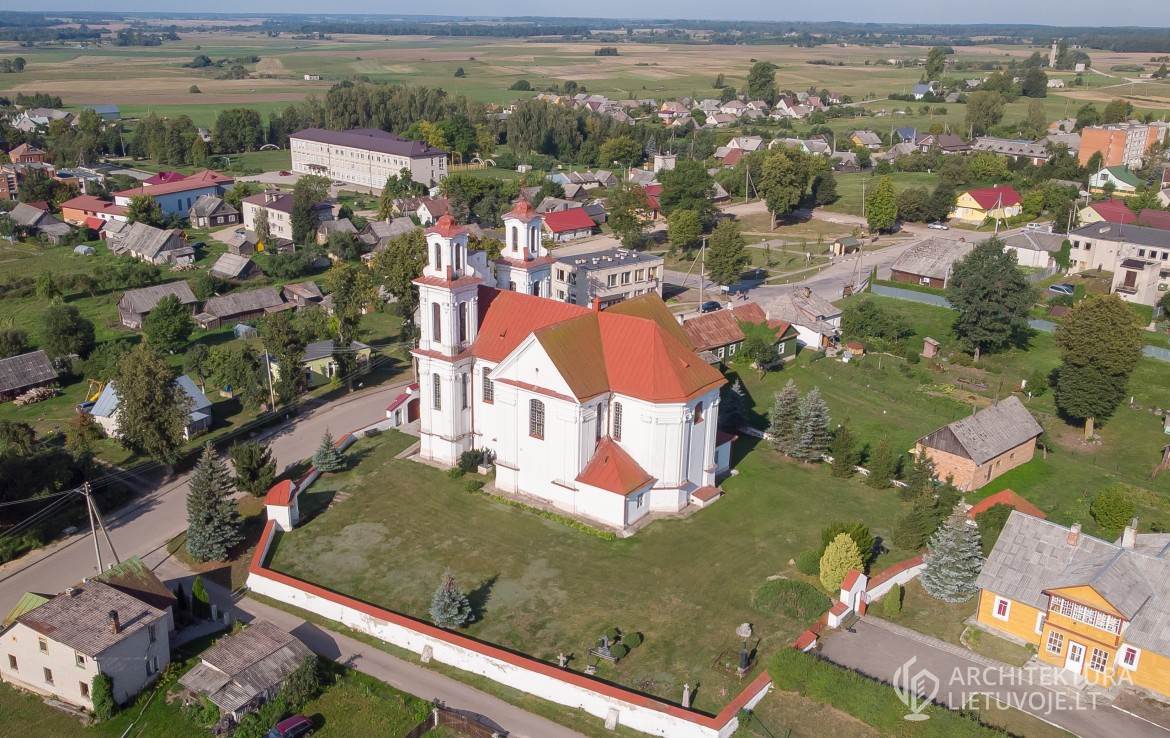