As the entire Curonian Lagoon, Smiltynė has been a sparsely populated area with several fishermen’s homesteads and a tavern for many years. However, with the changing social situation and the growing popularity of recreational culture, the seaside across the lagoon has become an increasingly popular holiday destination for townspeople. After the territory was connected to the city in 1900, its importance has increased even more: in the press of the interwar period Smiltynė was already described as “Klaipėda’s main resort and summer resort”. The summer villas of the rich people of Klaipėda started to emerge on the shore of the Curonian Lagoon and a large kurhaus was built in the place of the tavern. The buildings of the latter type used to be some kind of cultural centres in recreational areas: hotels, dance halls and restaurants used to be there. This one was no exception – it used to be not only one of the most important places of entertainment in Klaipėda at that time, but also the largest structure and symbol of Smiltynė. Among other entertainments, tennis courts, a panoramic outdoor café and a pier not only for larger boats but also for water sports enthusiasts used to be established here. Since the kurhaus was built on a small hill, it enhanced its dominant impression as well as a spectacular view of the port city was visible from it.

The kurhaus of Smiltynė is primarily an example of the romanticised “homeland style” popular in Germany, and especially in its resorts, since the end of the 19th c., having a typical roof structure, balcony design and a use of a partial fachwerk structure. Although the construction of the buildings of the latter structure in Klaipėda was limited after 1900, exceptions used to be applied to the parts of shelters as well as country villas. The influence of the Jugendstil spreading at that time is primarily felt in the pattern of the fachwerk elements. Surviving décor typical of the style can also be found in the pattern of the wooden single-storey extension as well as the fences of the staircase. The main façade of the building is symmetrical: the visual solution of the three-storey lateral avant-corps is created namely through the fachwerk structures and balconies. They are connected by a wooden balcony-gallery throughout the entire second floor of the middle part, and covered by the main roof structure. Two dormer windows as well as a highlighted turret typical of the resort architecture of that time, which is lower than the general height of the building, are incorporated in the roof of complex form. Although the interior was almost completely destroyed during the Soviet reconstructions, part of the layout solutions as well as arches surrounding the corridors have remained. Part of the monumental stairs leading to the main entrance did not survive, and the altered relief reduced the building’s influence on the surrounding landscape. And yet, the kurhaus and the villas surrounding it form the strongest surviving collection of the German resort architecture of the beginning of the 20th century in Lithuania. 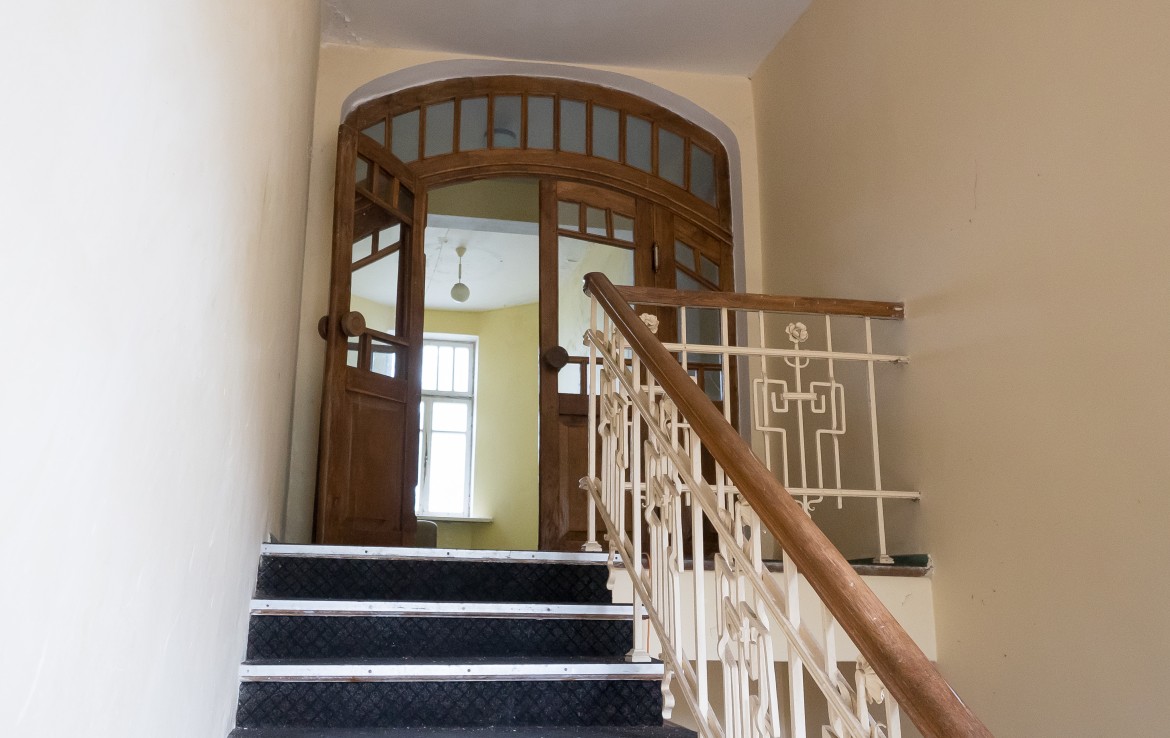 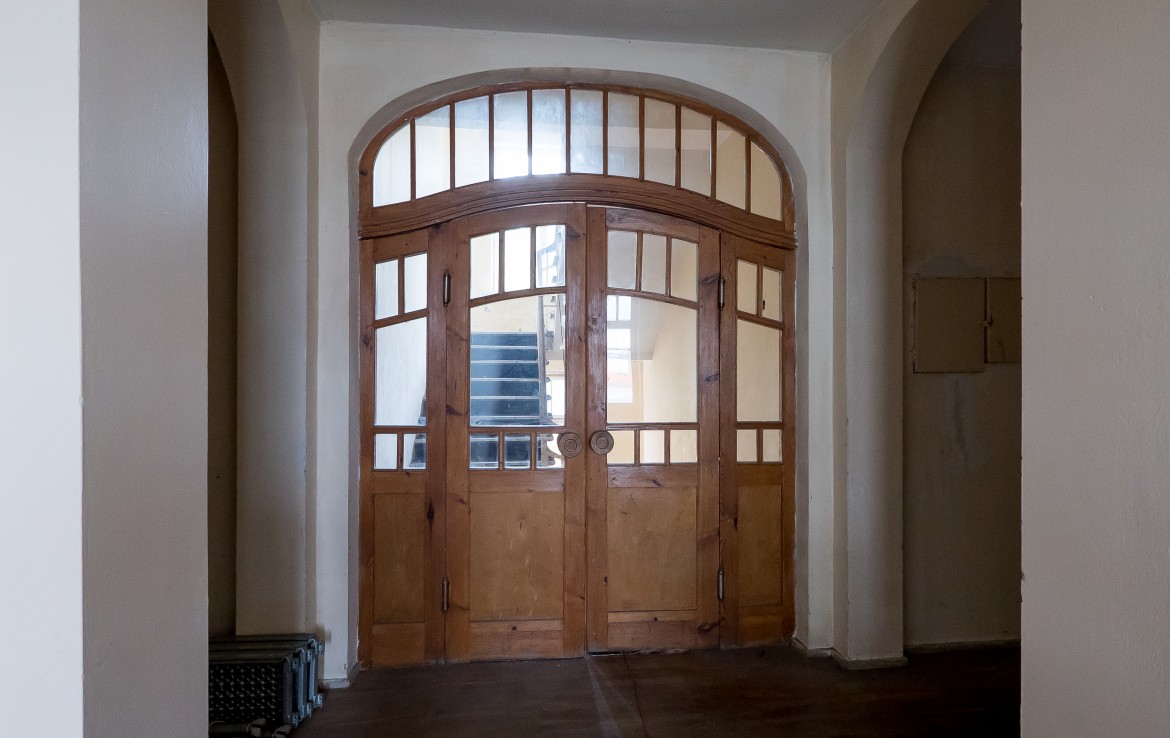 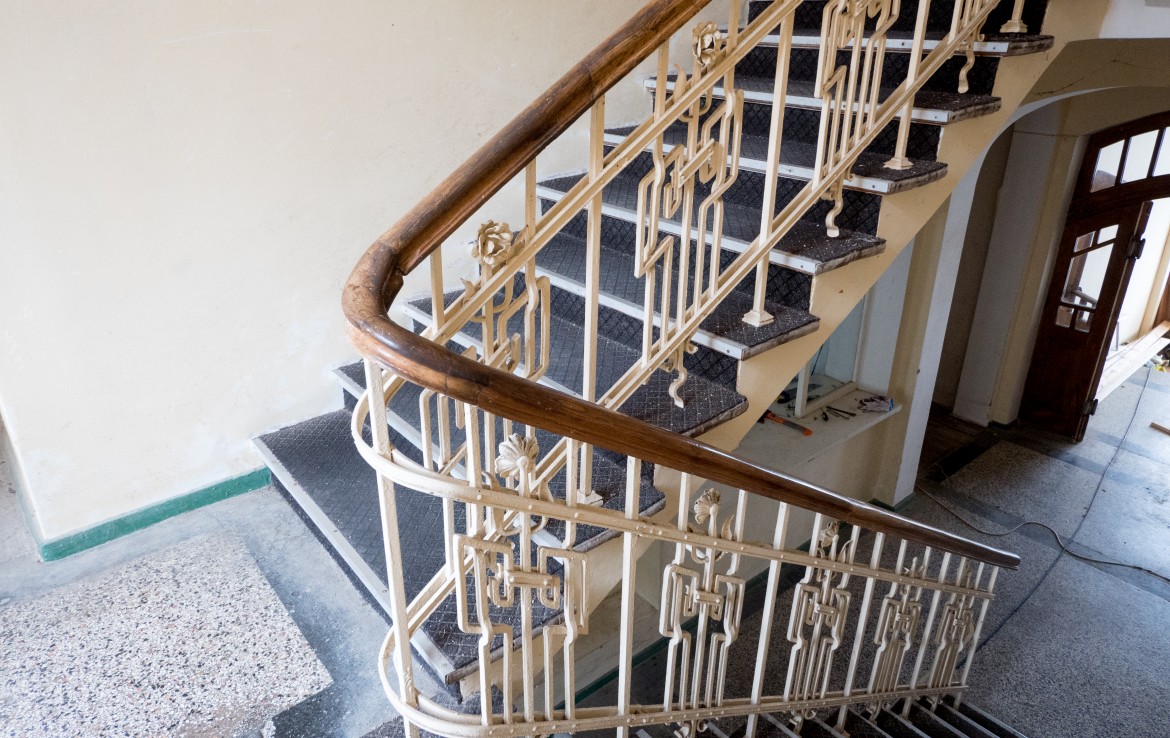 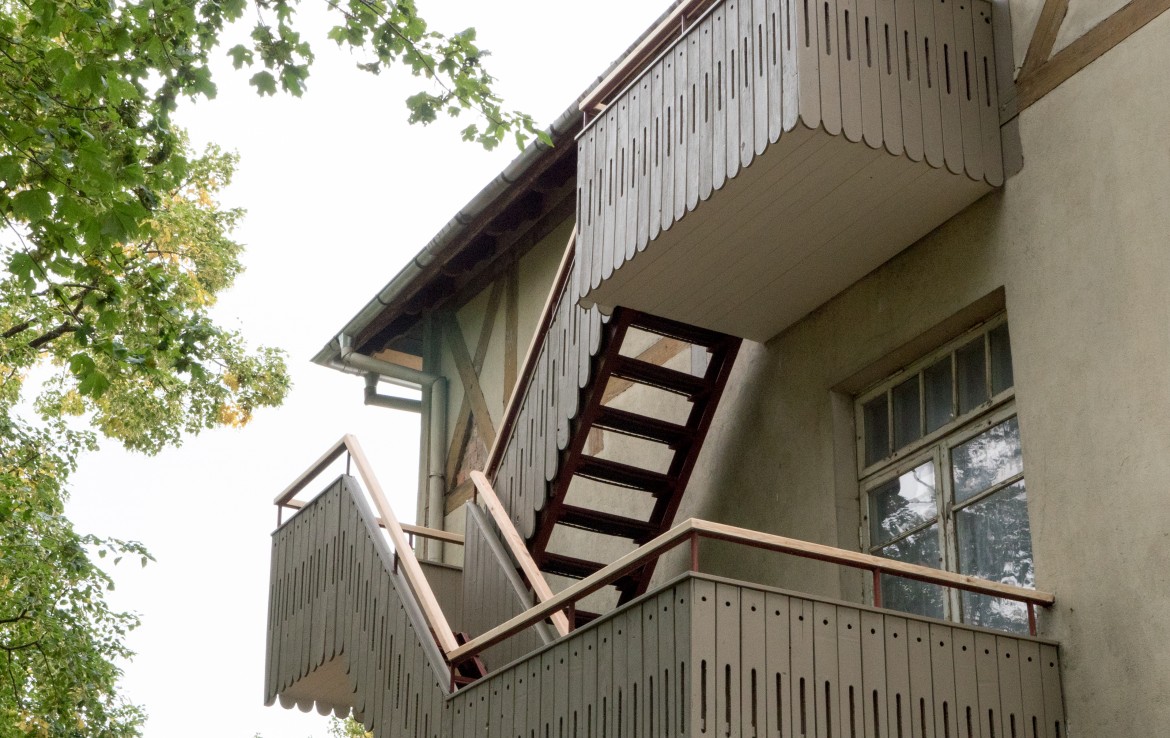 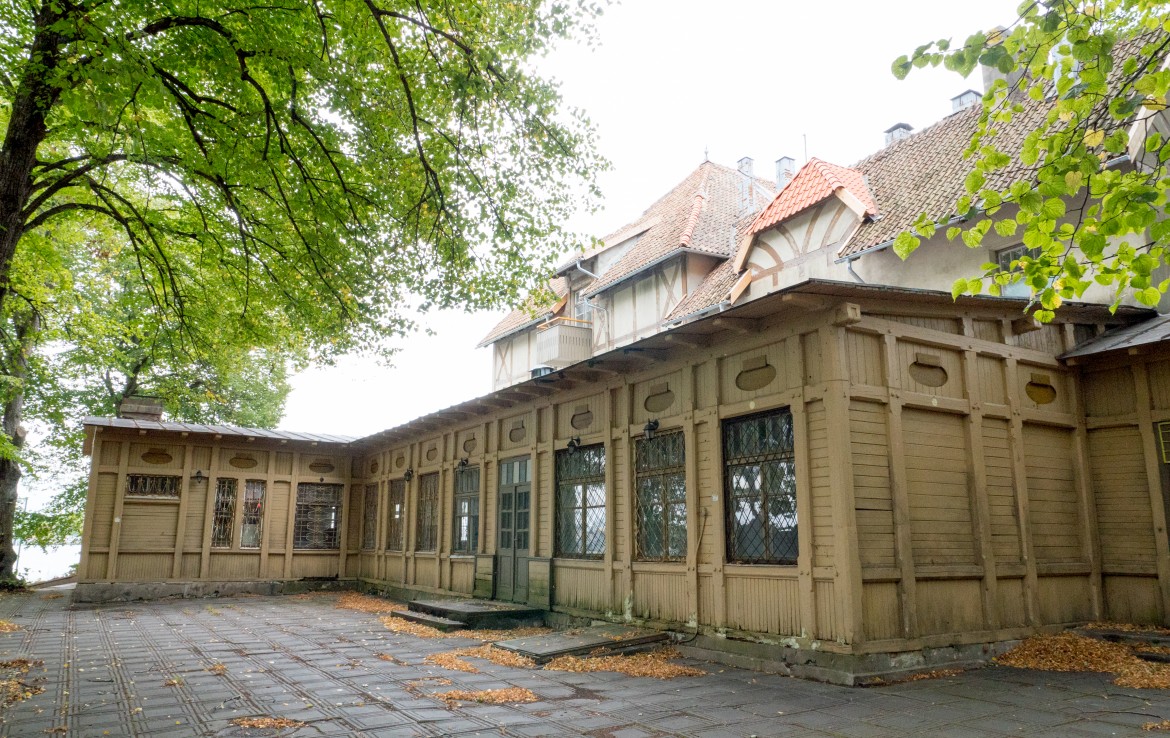 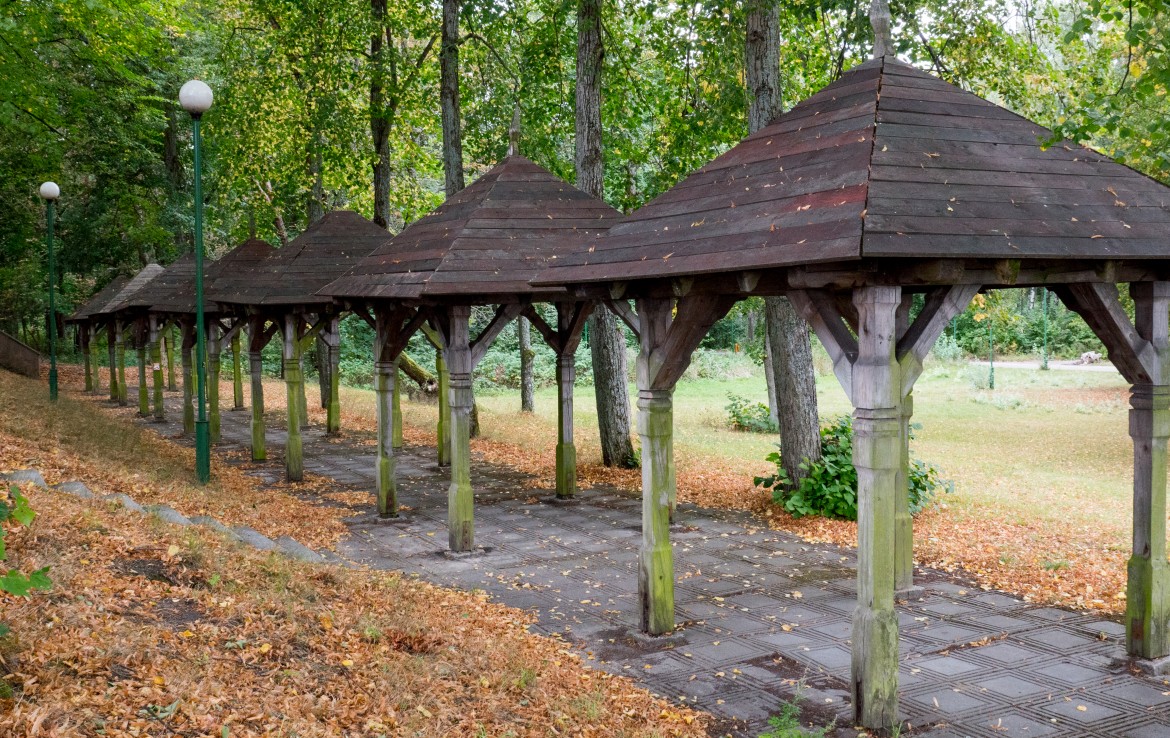 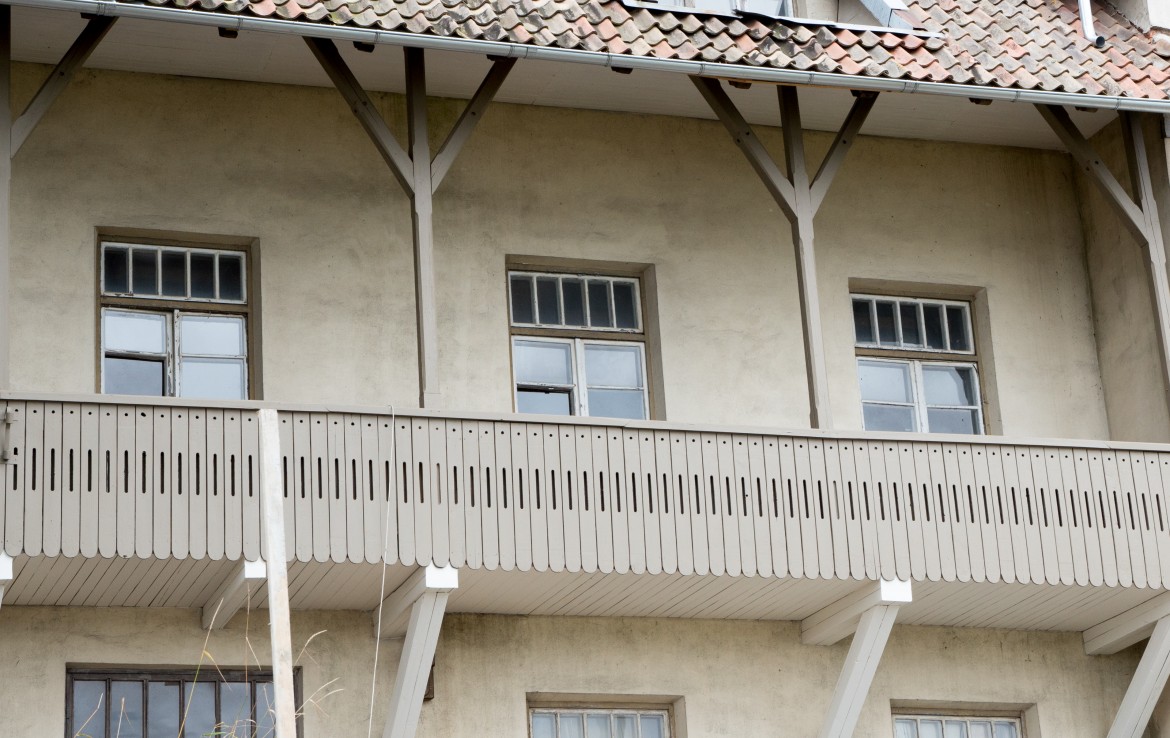 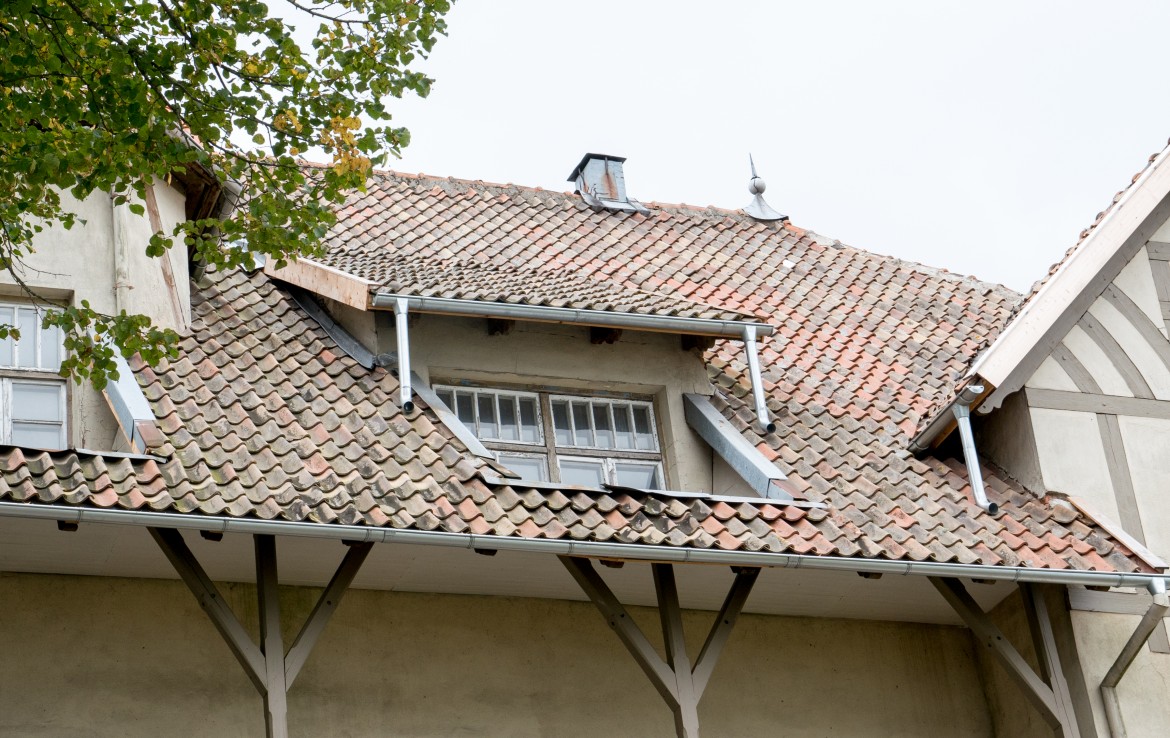 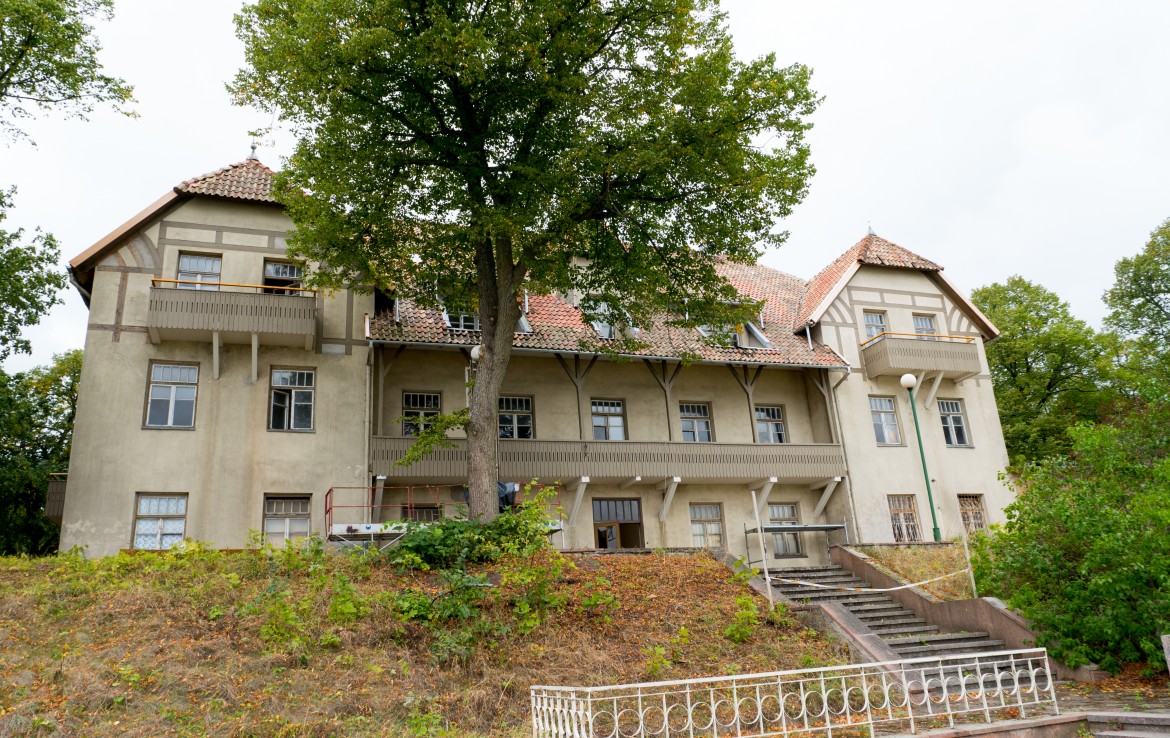 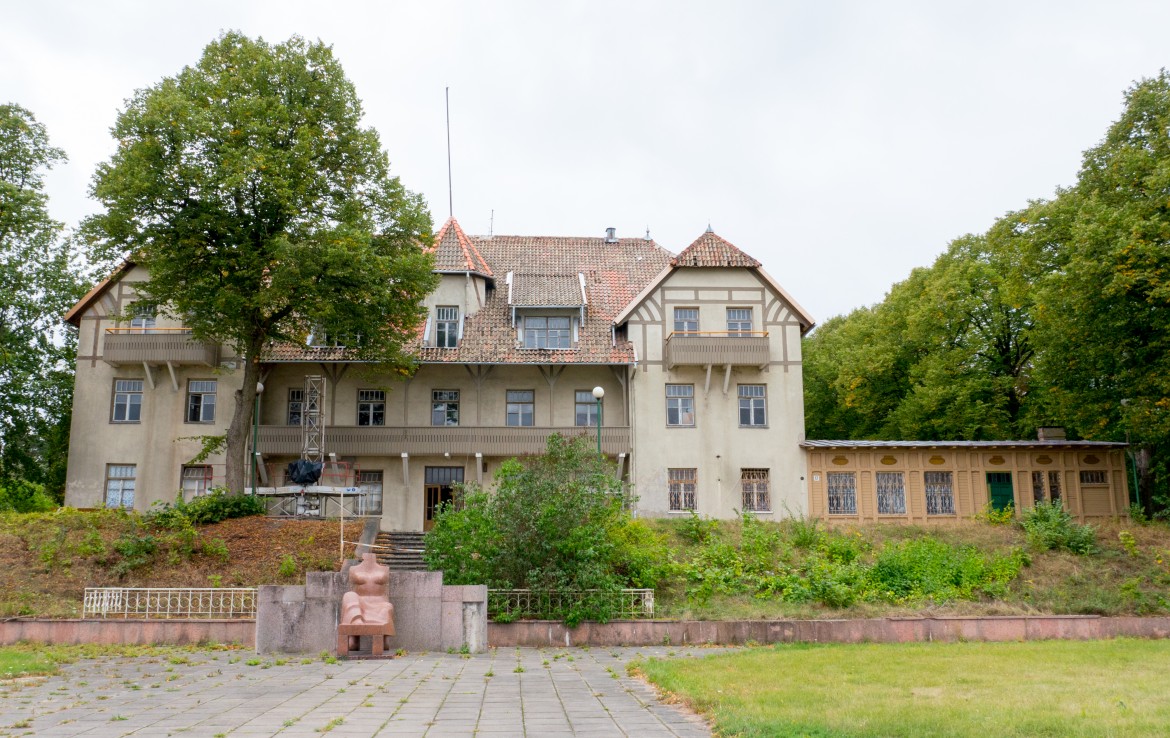 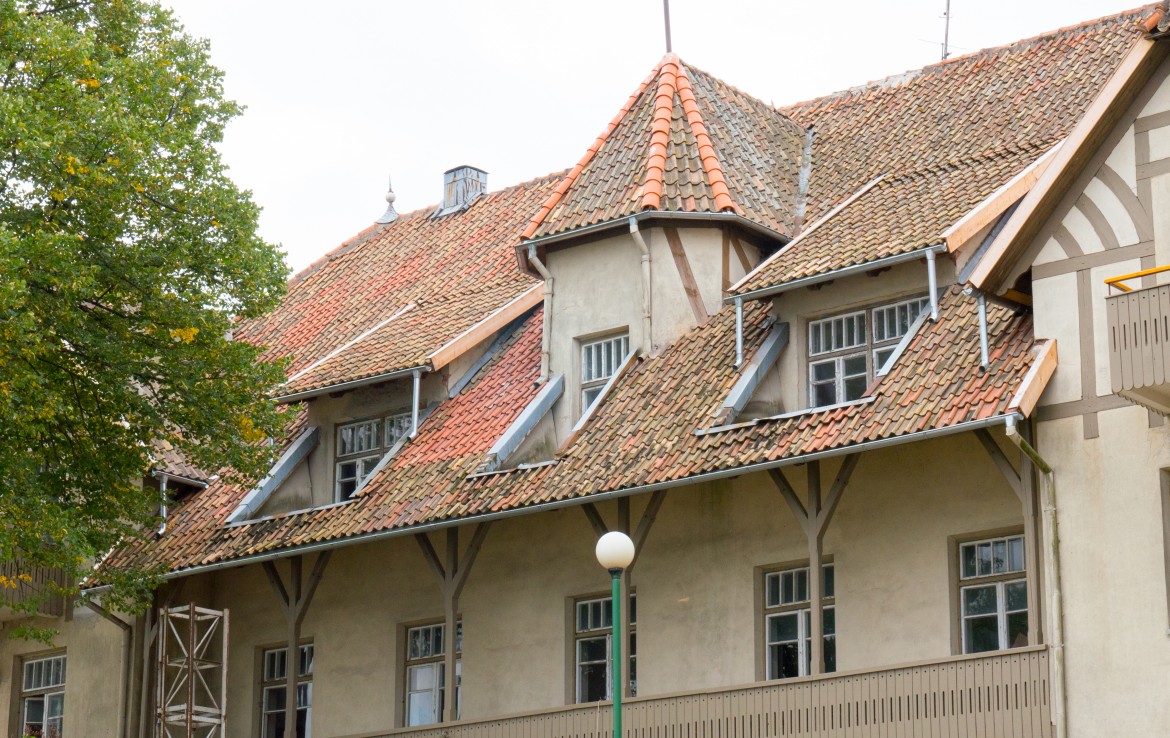 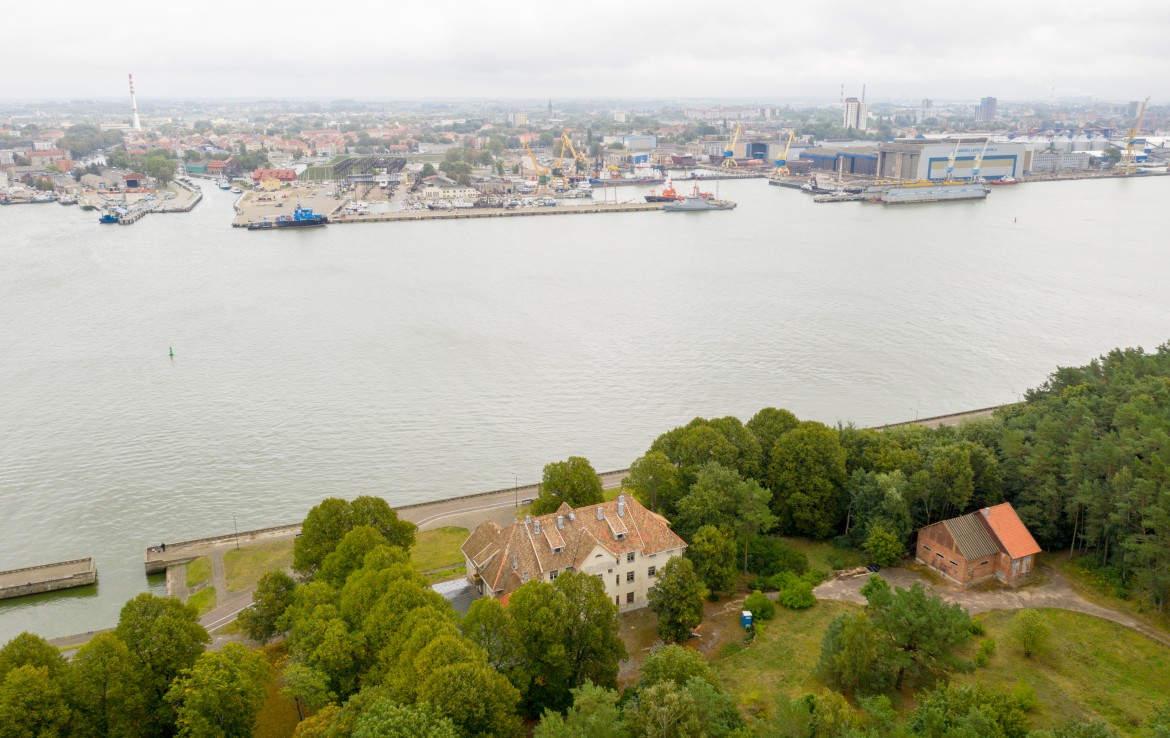 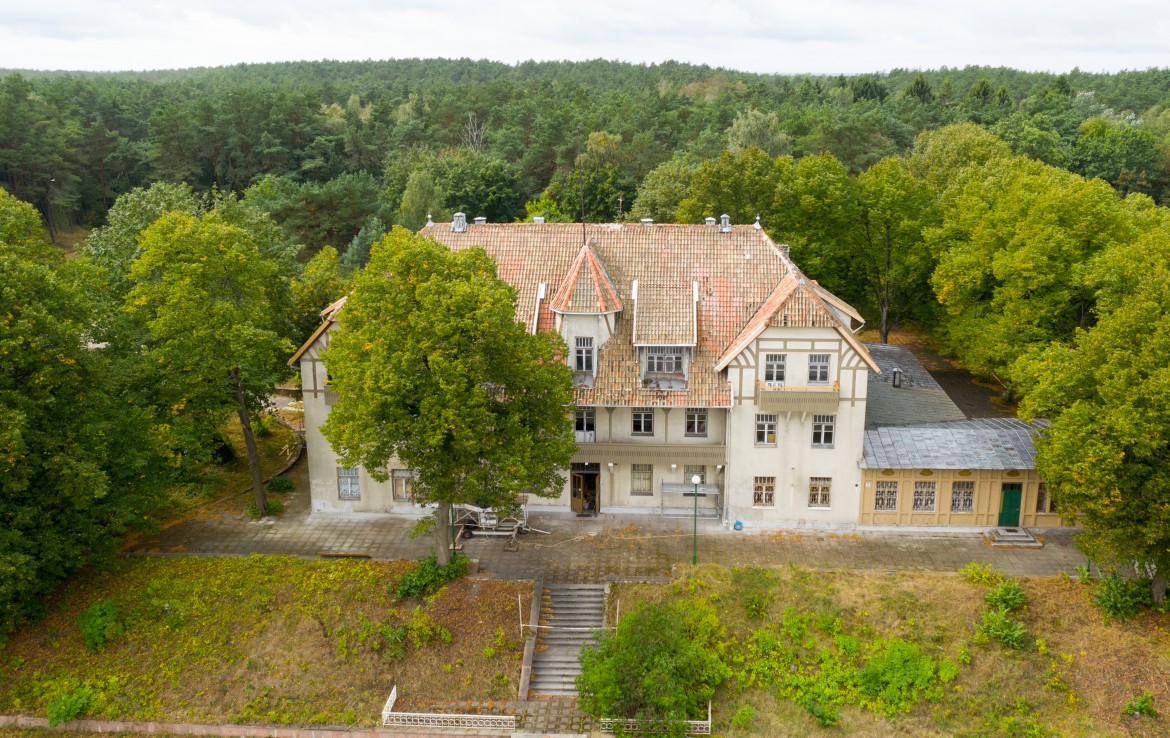 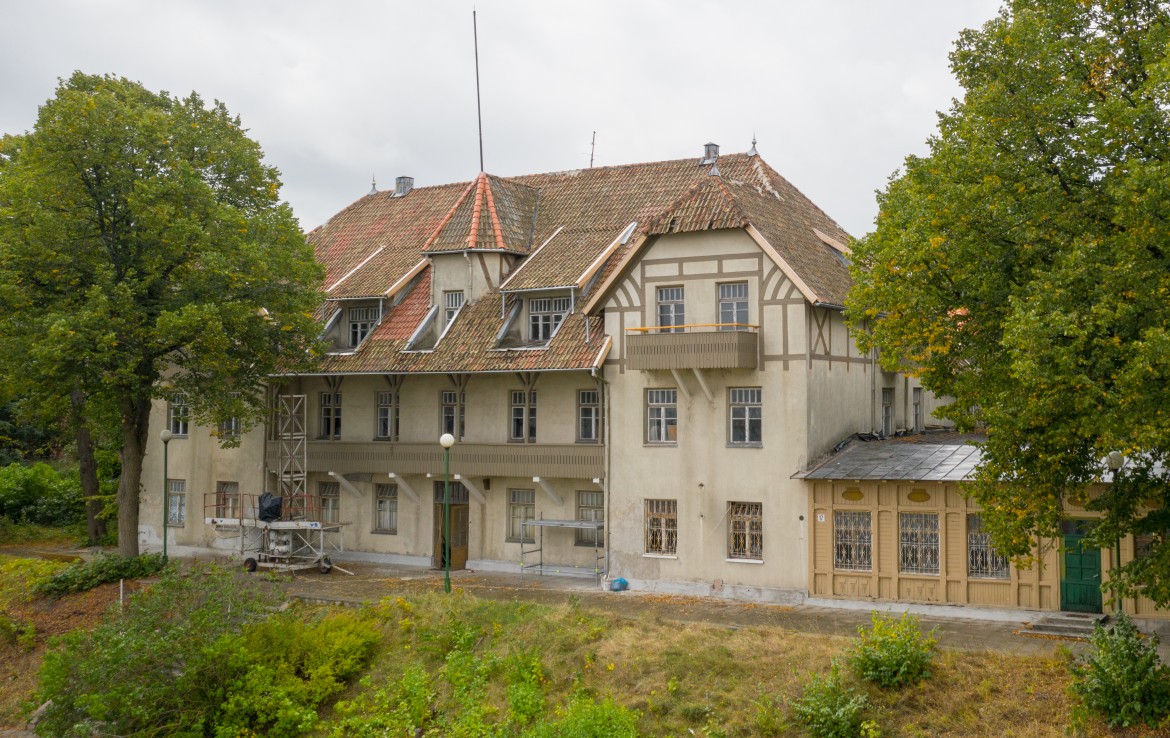