As the Šilutės town (then – Šilo karčema), formed out of four settlements, continued growing rapidly in the early 20th century, a need for a new Lutheran sanctum rose. The church present in one of the subordinate parts, in Verdainė, could no longer meet the needs of all the residents. The cornerstone for the new church was laid in 1913, but only a parsonage was built until the World War I. the construction of the church was delayed up until 1926. The main religious community of the city received new, spacious home with almost a thousand seating positions.

Thought stylistically the church is attributable to neo-Gothic style, still typical of the region, but the Šilutė sanctum differed from many surrounding predecessors simply by the fact that it was plastered. Though the church was designed by a local Curt Cutknecht, architecturally it is much closer to other buildings of the regions of the German Empire. Next to the exceptional church accents, it is worth mentioning the high plinth strip from quarried stone, rising through the section of the whole first section on the tower part. The recessed main entrance, located at the profiled portal, is complemented by two lateral entrances, above which – relief compositions. An especially playful element – a motif above the entrance of three pointed arch windows “framed” by small pilasters with an entablature, which constitutes a composition with the solution of the section of the upper tower. The main tower spire is surrounded by four smaller ones. They are stocky, but perfectly adapted to the proportions of the church. In many neo-Gothic sanctums in Lithuania, the sanctum’s spires are complemented by much smaller pinnacles.

The church is of a rectangular plan, of three naves: the main area is surrounded by galleries typical of Lutheran churches. The laconic setting up of the interior, mostly by designing the various functional parts, is also typical. Since the Šilutės church was ravaged the least out of many sanctums in Lithuania Minor, many fine elements have still survived. Though the interior is not abundant in neo-Gothic elements, however it perfectly reflects the somewhat eclectic trends of the early century – we may see this in the remaining wall painterly, ceiling décor, in the remaining chandeliers or the stylised column capitals. The work of local craftsmen was used as much as possible in the setting up of the church. For example, the oak altar and the confessionary were manufactured at the local Munkas workshop. Echoes from some distant parts of the former German Empire also remained: the walls and vaults were painted by the Königsberg professor Richard Pfeiffe, according to whose project the remaining stained glass was crafted. The bells of the church were cast in Thuringia. 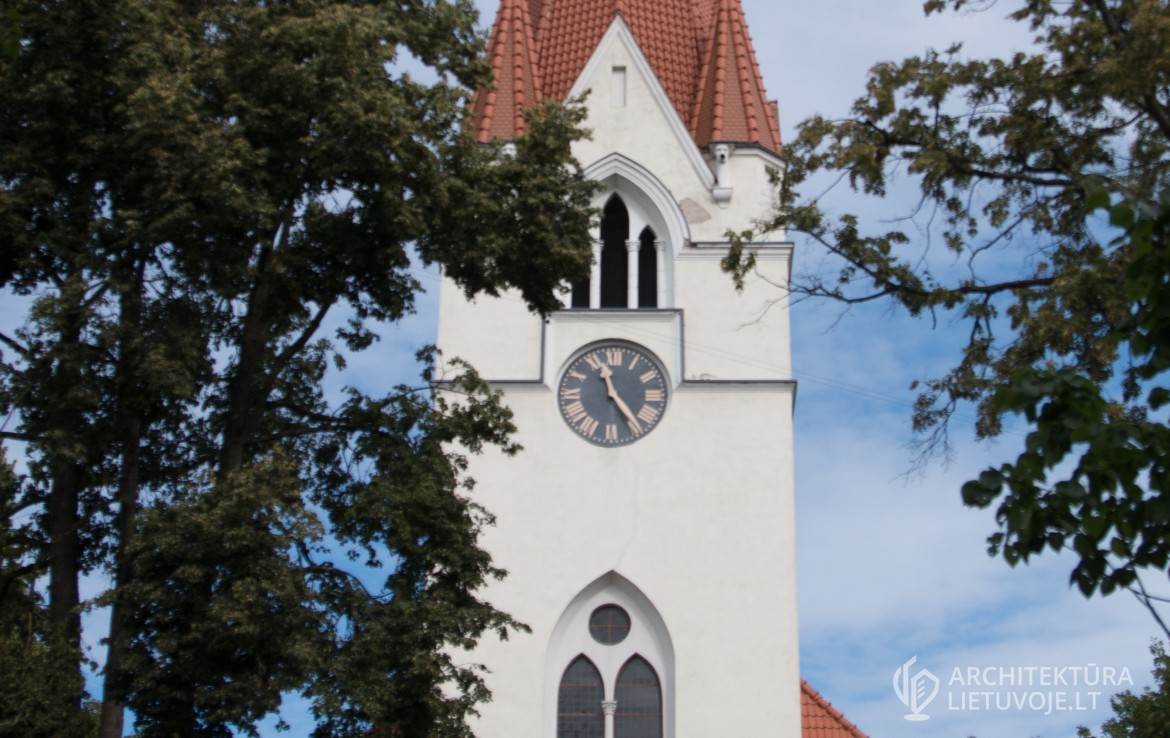 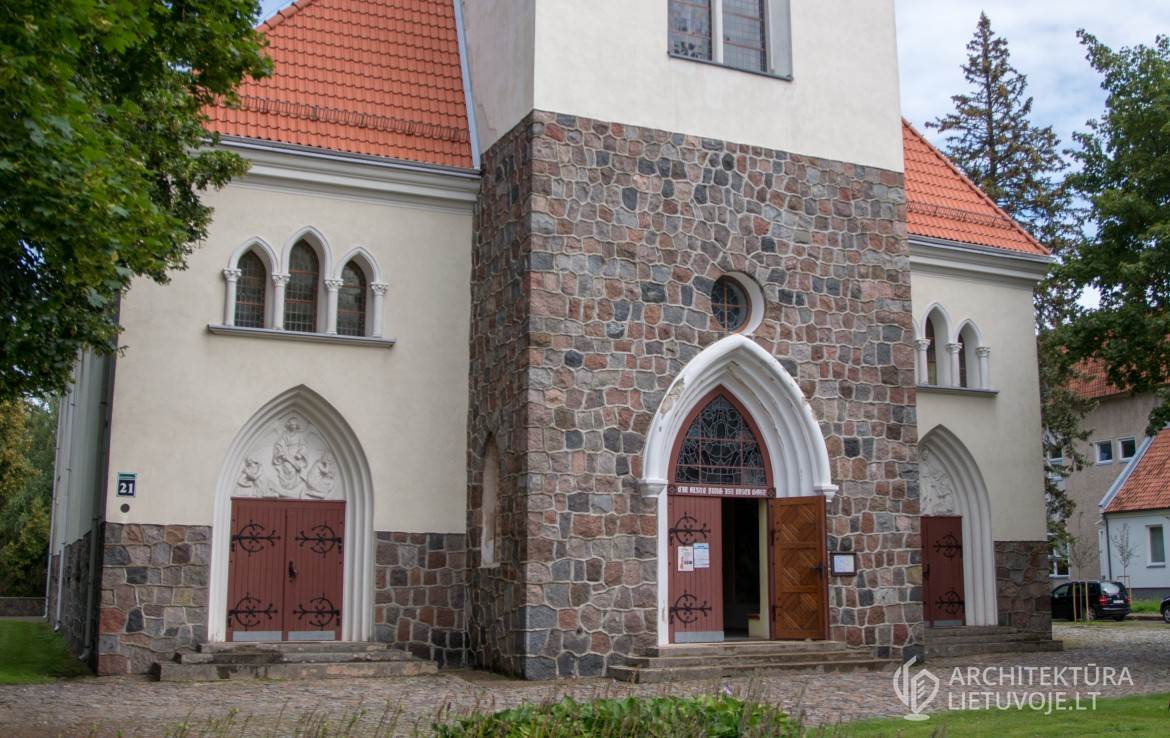 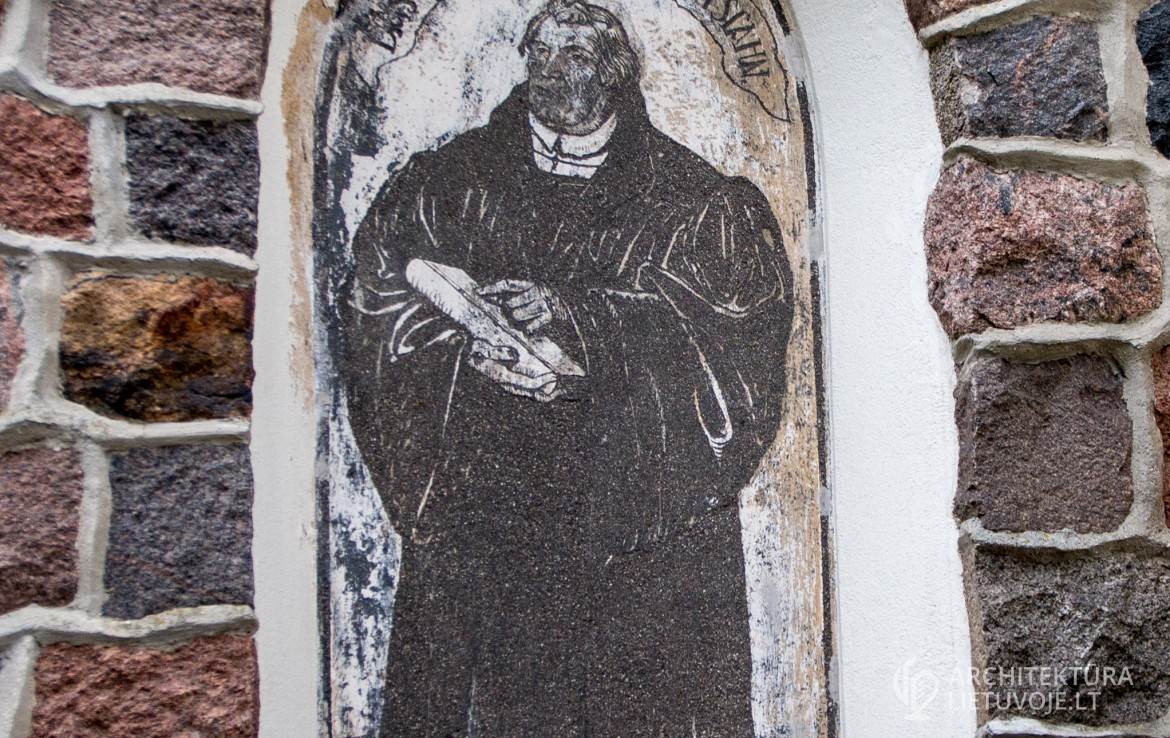 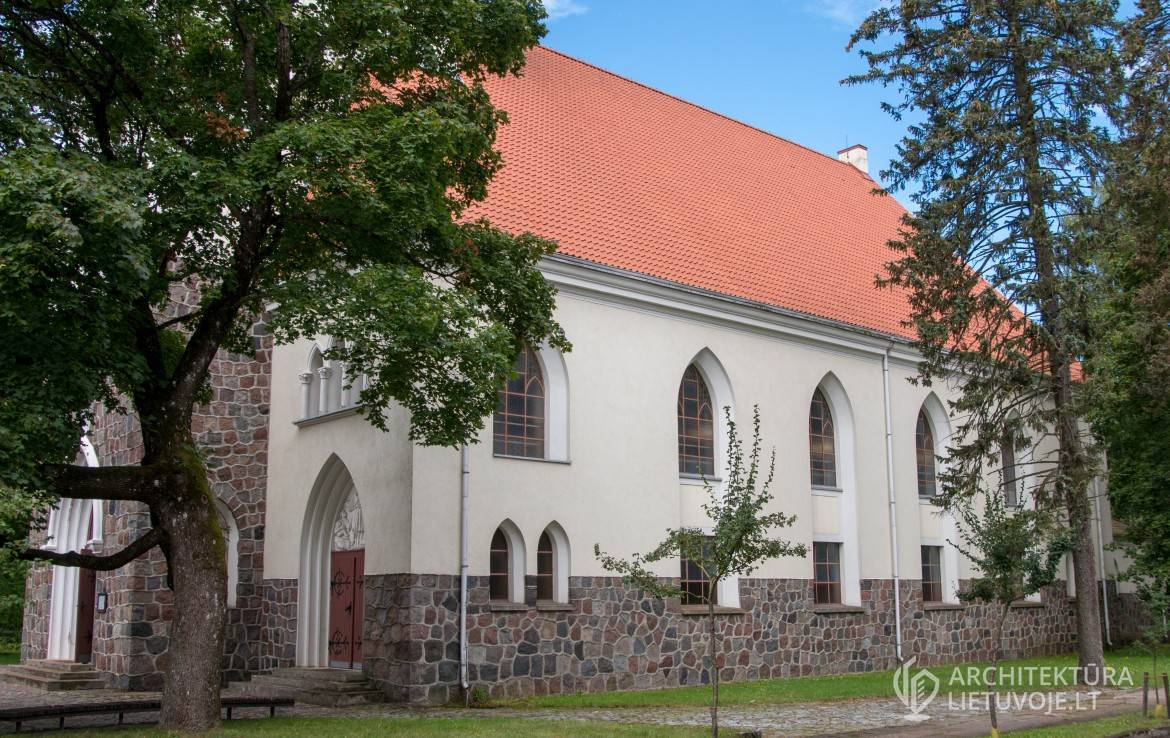 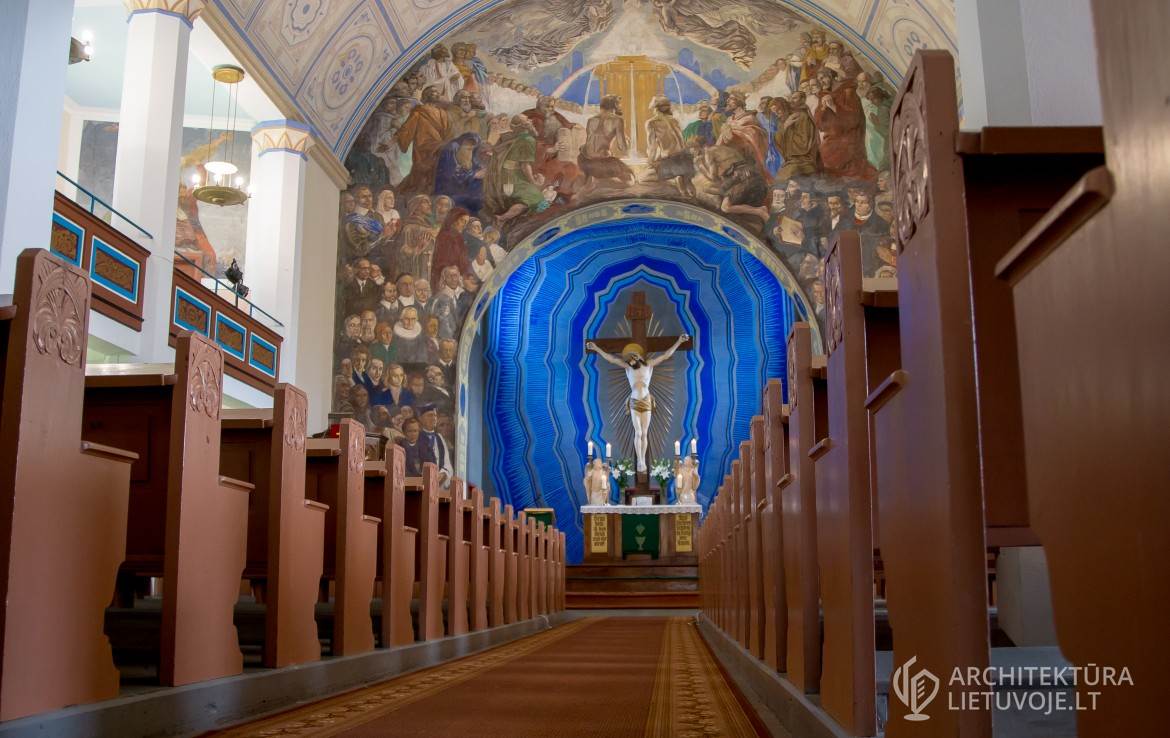 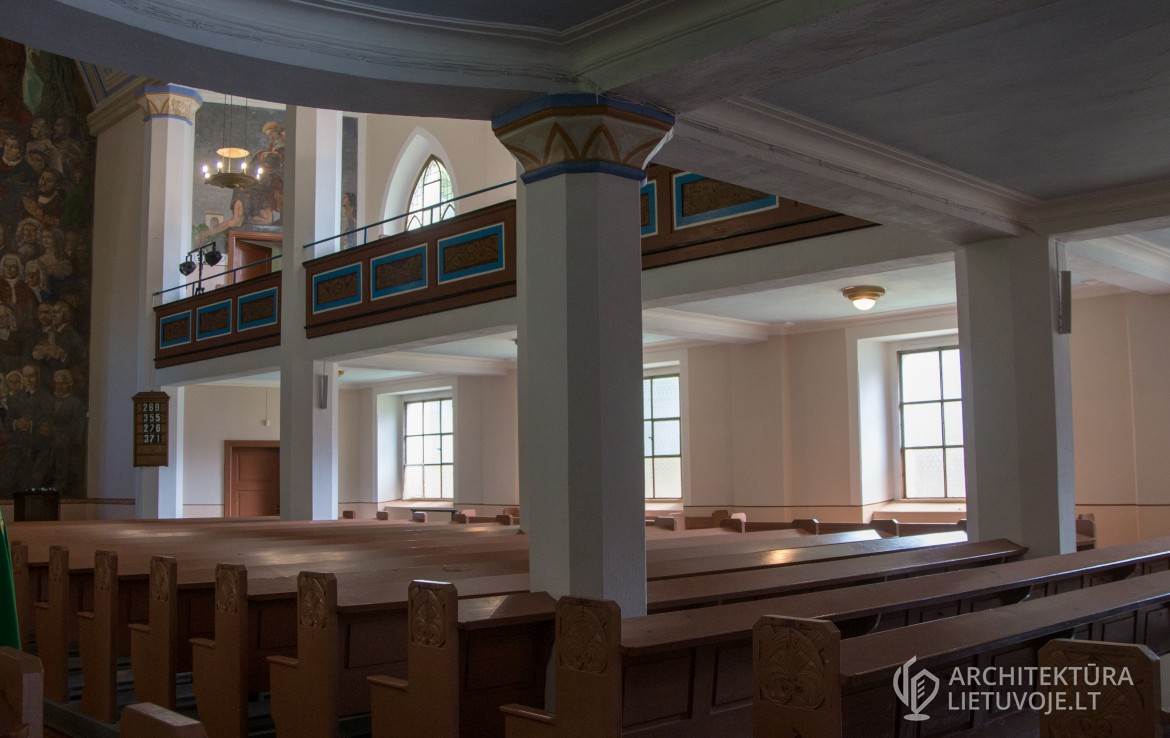 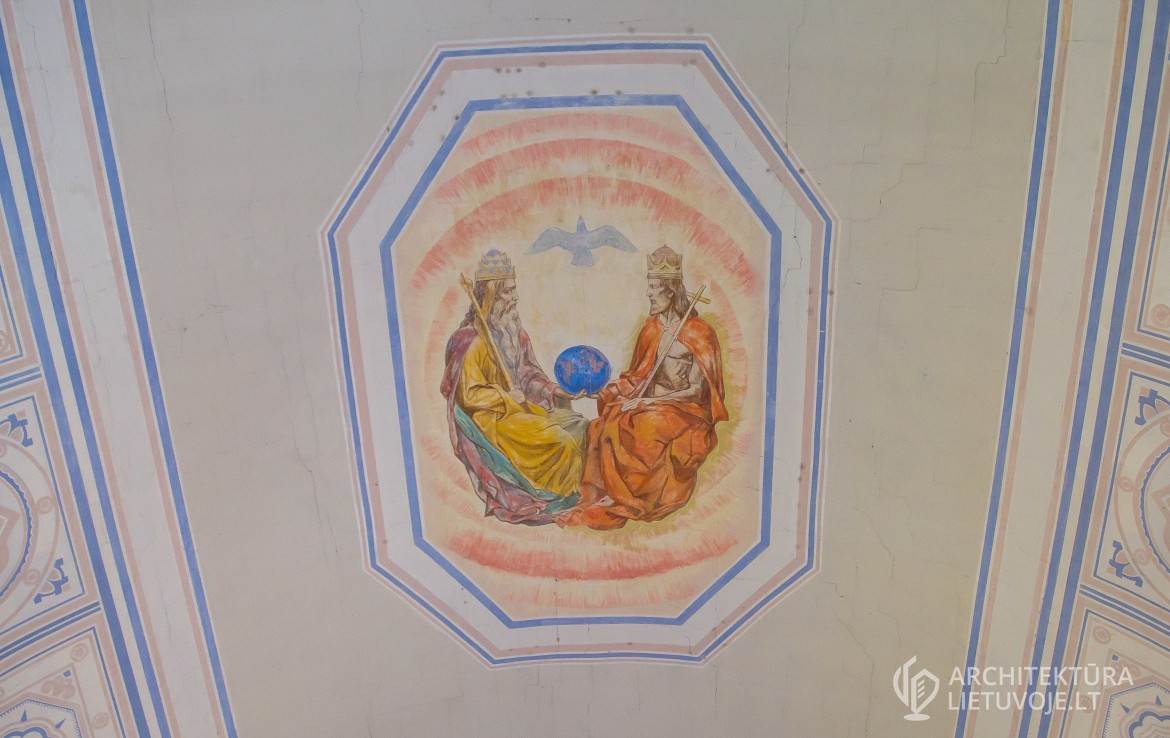 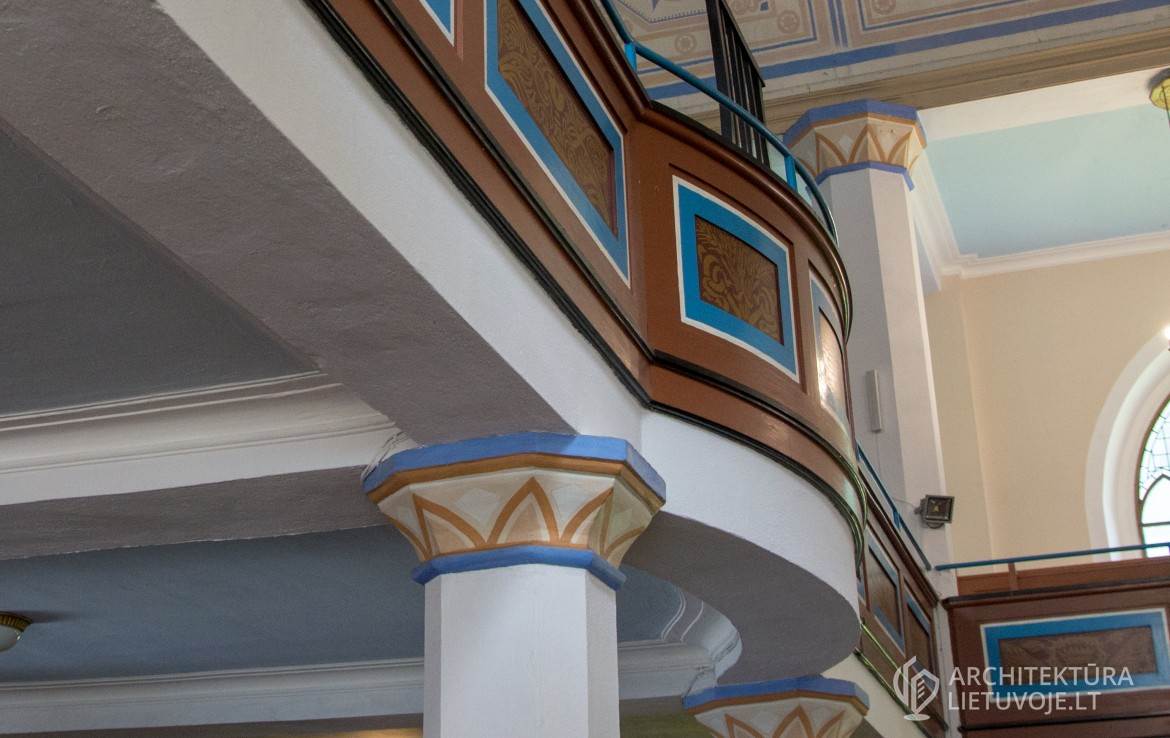 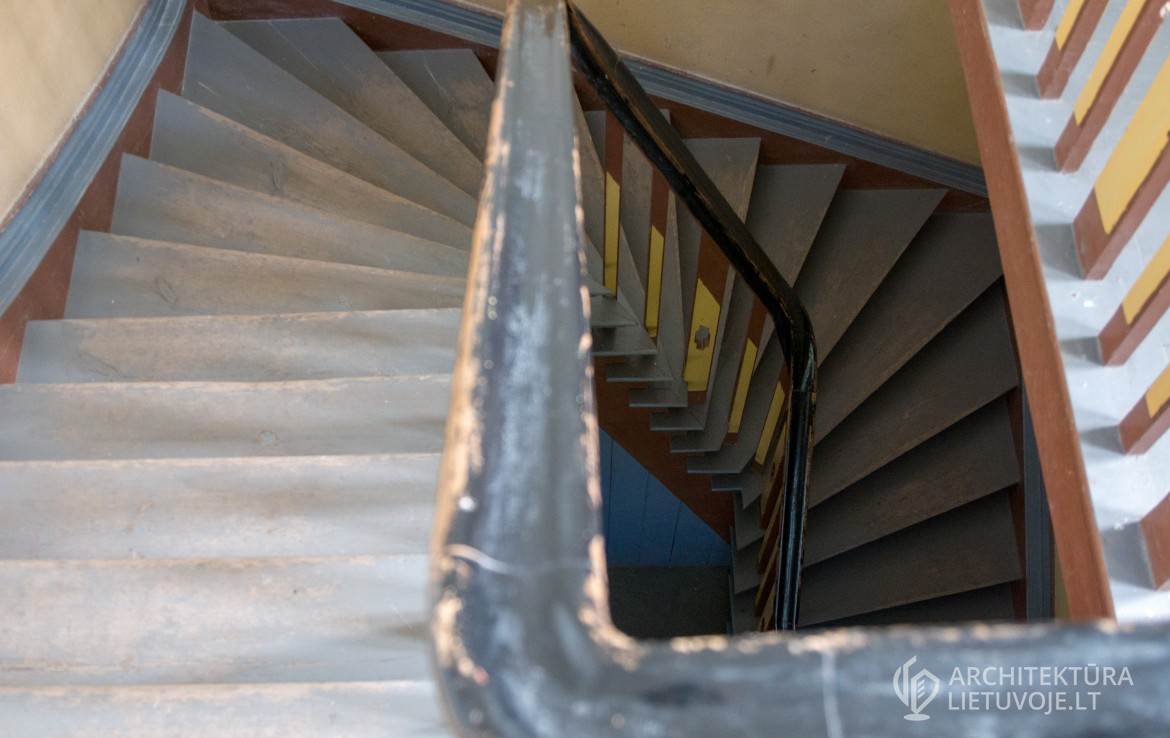 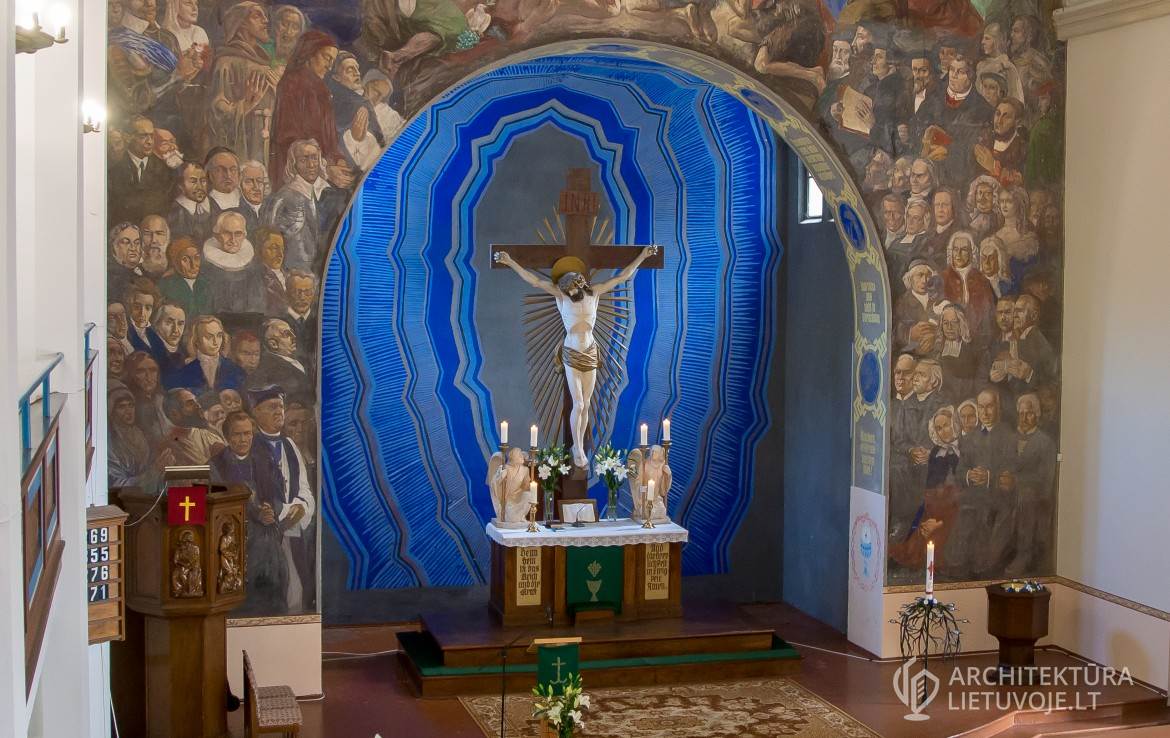 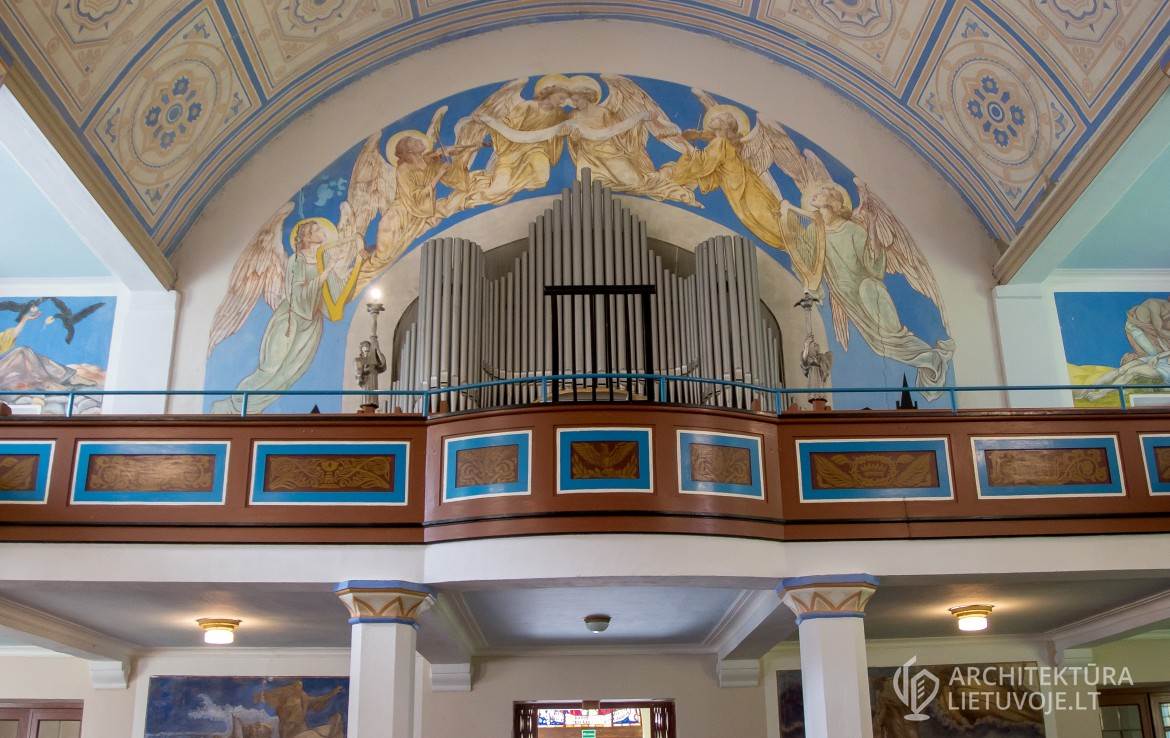 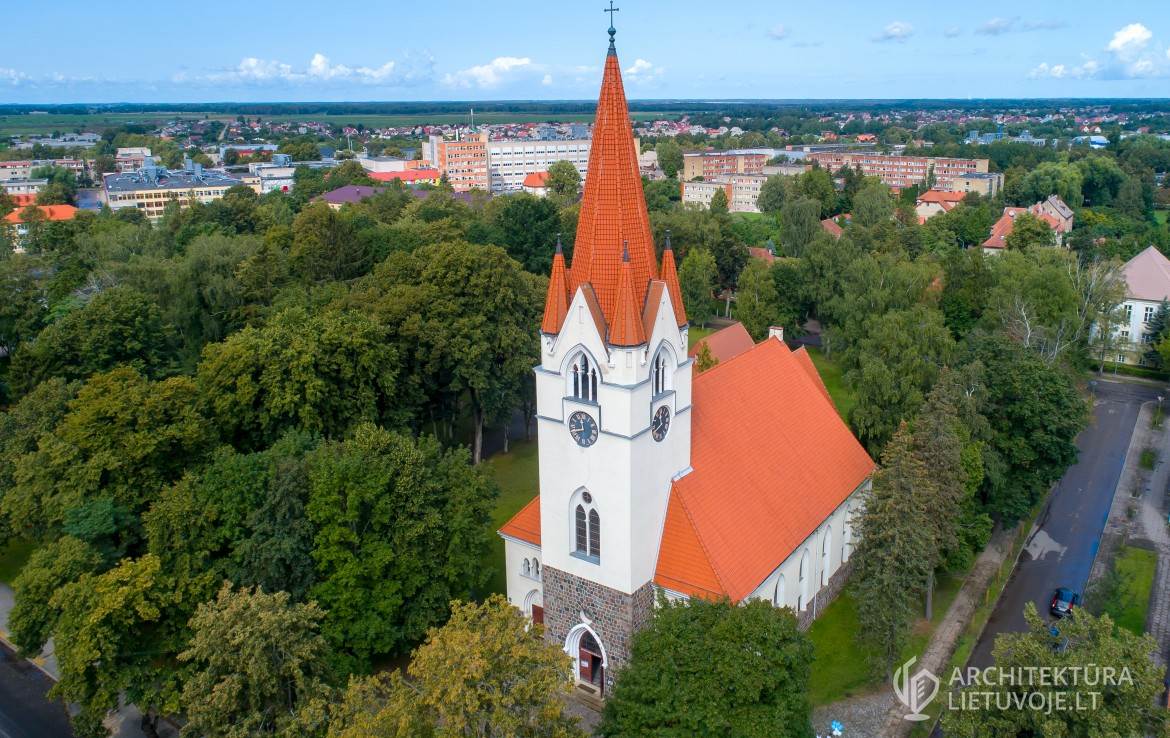 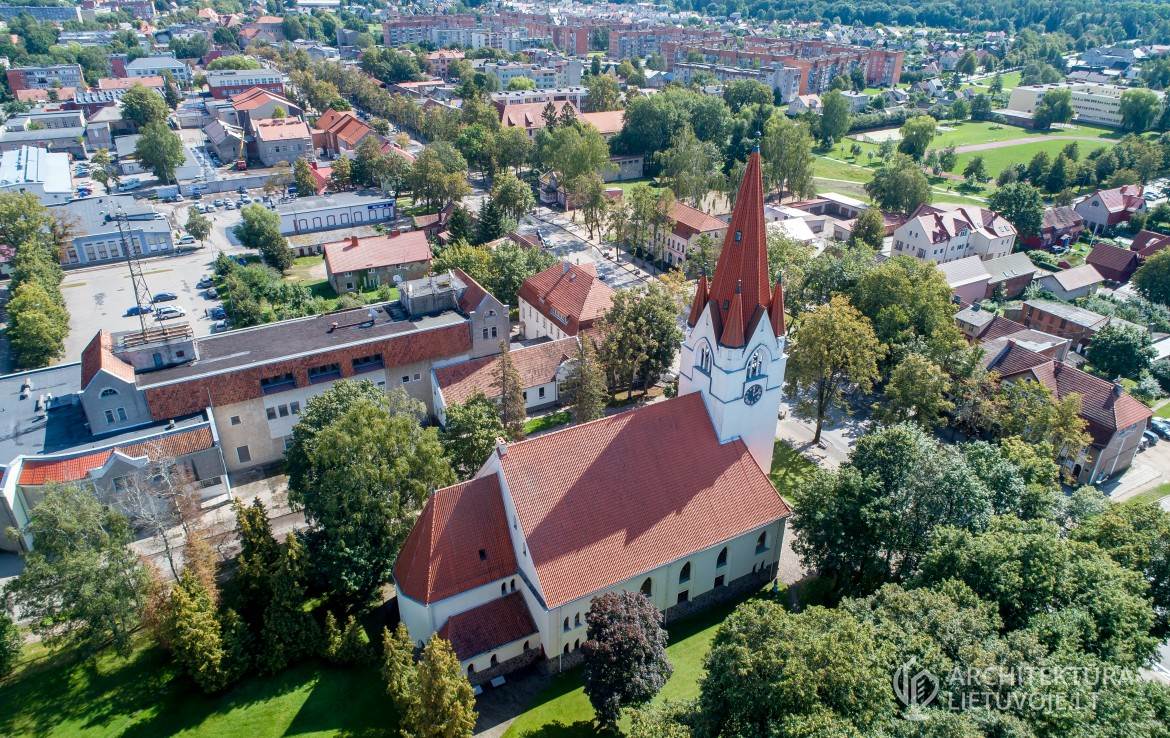 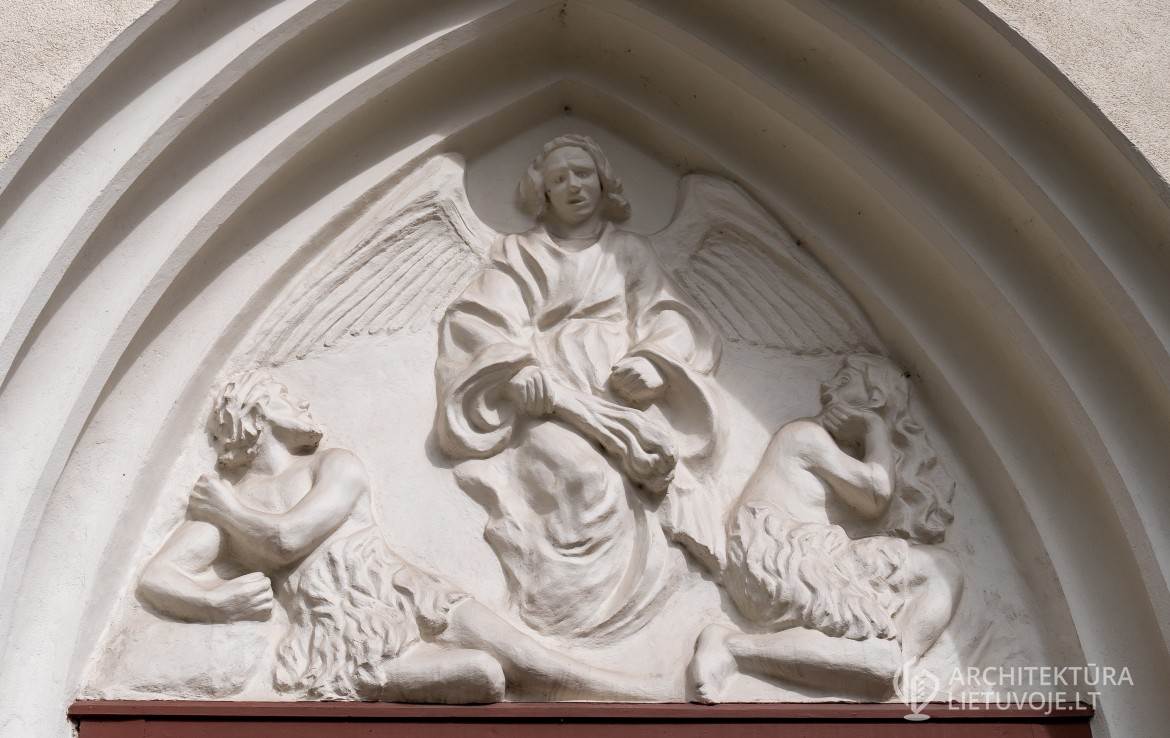 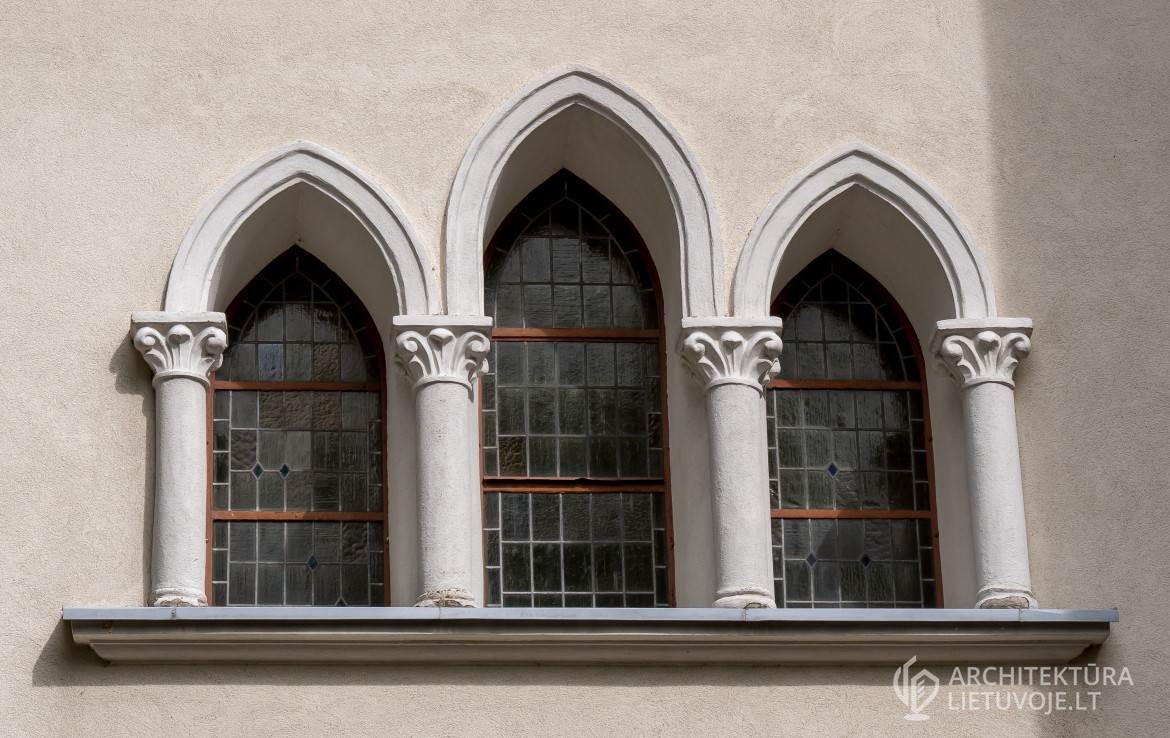 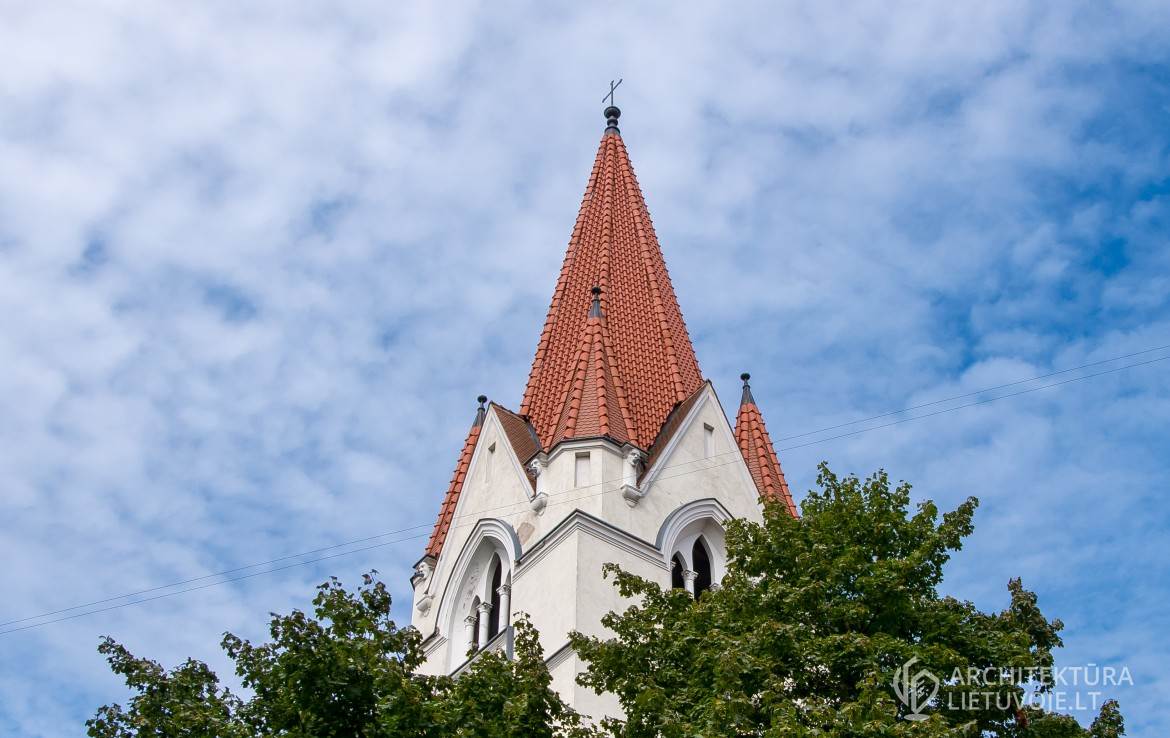