Lord’s Revelation to the Virgin Mary and St. Benedict’s Church in the Old Trakai

Old Trakai Church of the Lord’s Revelation to the Blessed Virgin Mary and St. Benedict (Church and a Former Monastery)

It is thought, that before this title was assigned to Vilnius, the capital of the Grand Duchy of Lithuania was transferred from Kernavė to the Old Trakai, which were established in 1316. Once the Old Trakai lost its relevance, Vytautas transferred his home castle to the Benedictines in 1405 and built a church there, and in the second half of the 16th a new monastery and a church were built, which were lost during the fire of 1757.  Reconstruction works took a long time, but the tsarist authorities closed the monastery in 1845 and the reconstruction was still not completed. The incomplete building was transferred for the needs of the Old Trakai Parish. Only by the end of the 19th century, a permit for the construction of a new church was obtained, or more precisely – for the reconstruction of the former northern monastery wing, which was completed in 1899. What’s interesting is that Apolinaras Mikulskis, a resident of Vilnius, who has designed the building, would usually work only with residential buildings. Though slightly changed, the volume more typical of the monastery is still very prominent in the church silhouette; this is revealed by the sanctum’s plan resembling letter “L”. The side façades are laconic – only the large niches of the pointed arch windows are prominent here, thin lisenas and a modest cornice. The main highlight of the building are the four two-tier buttresses, the top parts of which are turned diagonally, vertically splitting the quite simple front façade,  which is made up of several layers of pointed arch windows and a Gothic portal. The buttresses transform in to pinnacles of two different sizes, in the walls of which, high, vigorous niches are situated. Above the roof line, the pinnacles are joined with non-plastered arcatures by forming particular attic walls. The lower pinnacle rises at the centre of the façade, above it the crown motive protrusions are incorporated – a modest cross is placed on this small central vertical. The buttress – pinnacle rises on the edge of the north-east extension of the façade, harmoniously incorporating its volume to the silhouette of the church. The three-nave area of the sanctum is split by pillars joined by the semi-circular arches, as the lisenas stretching through the height of which connect with the fine, profiled cornice at the top. The area of the church is utilitarian – the most striking decorative accents here are the elements of the equipment, such as the altar in eclectic form or the neo-Gothic organ. 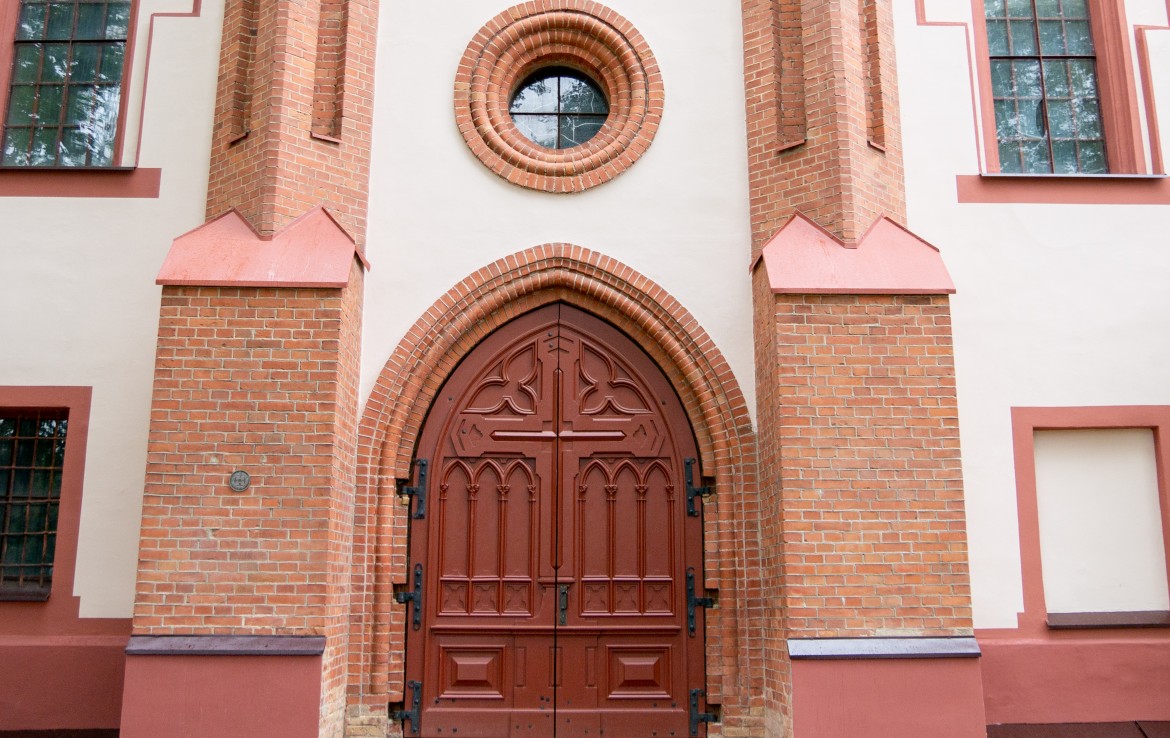 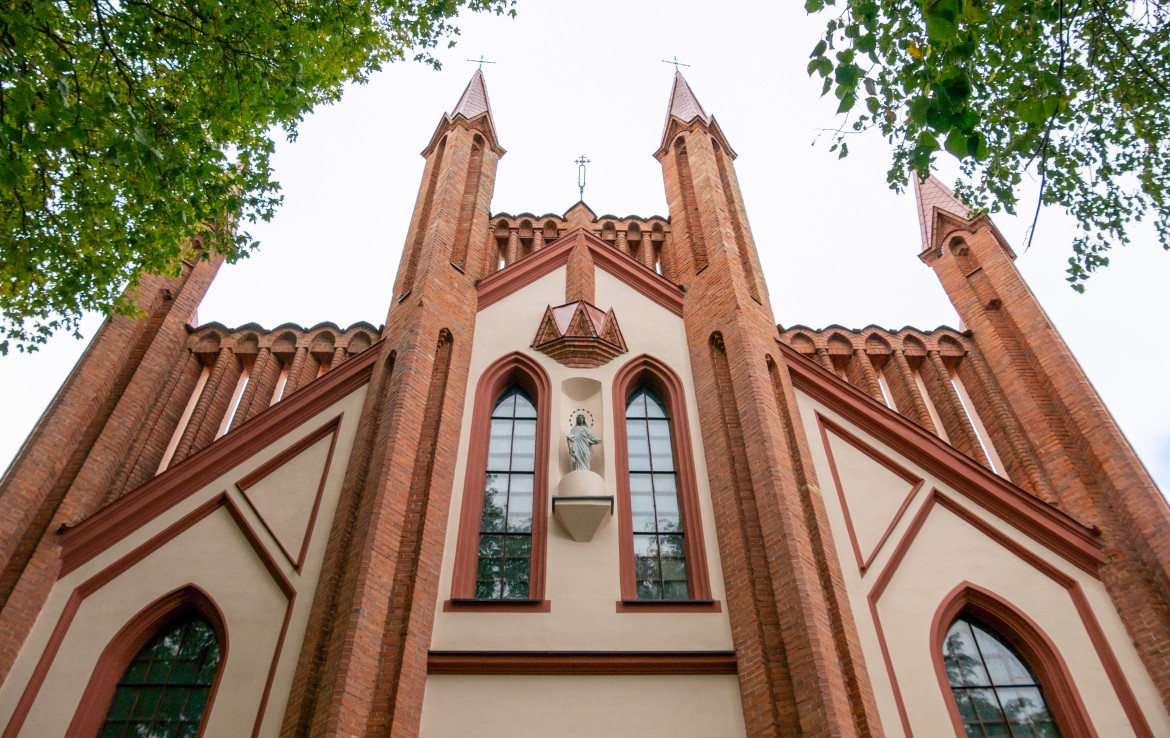 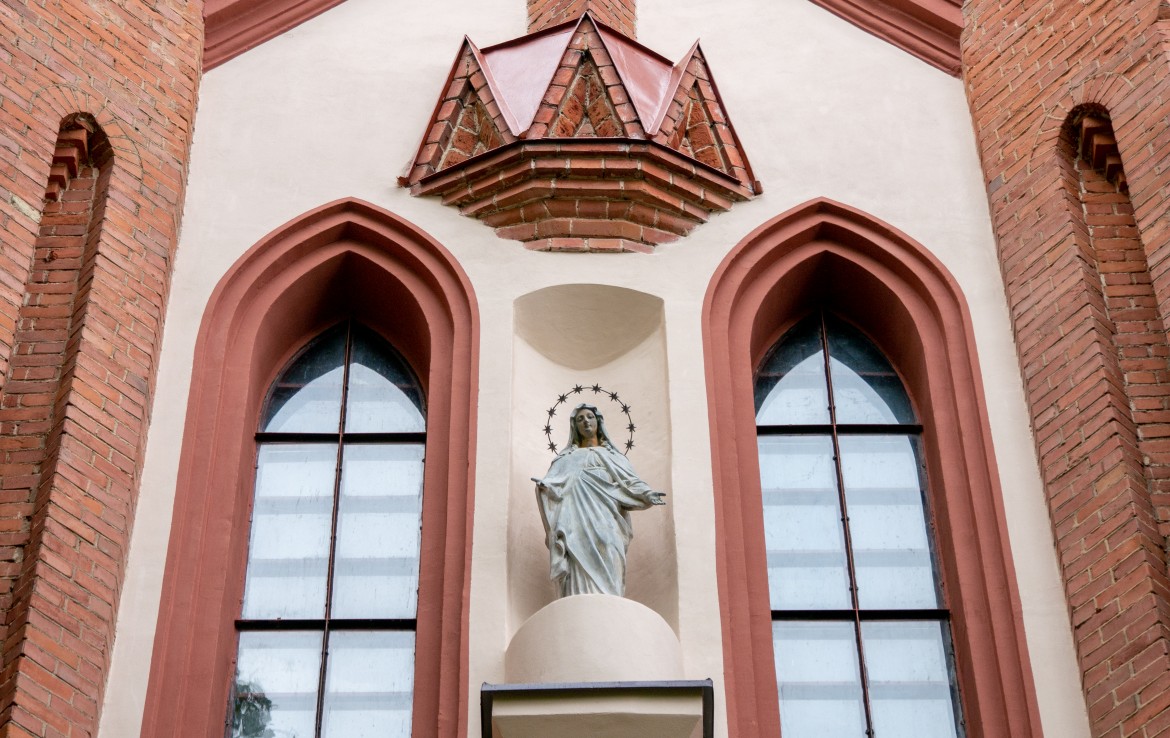 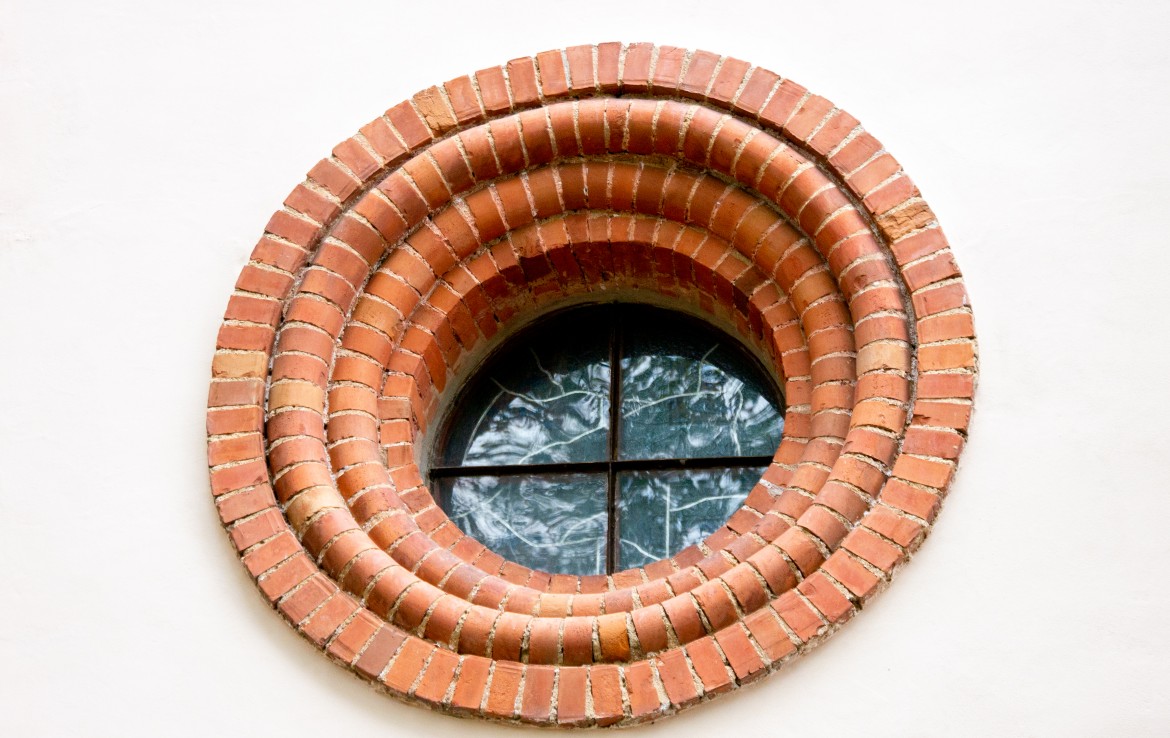 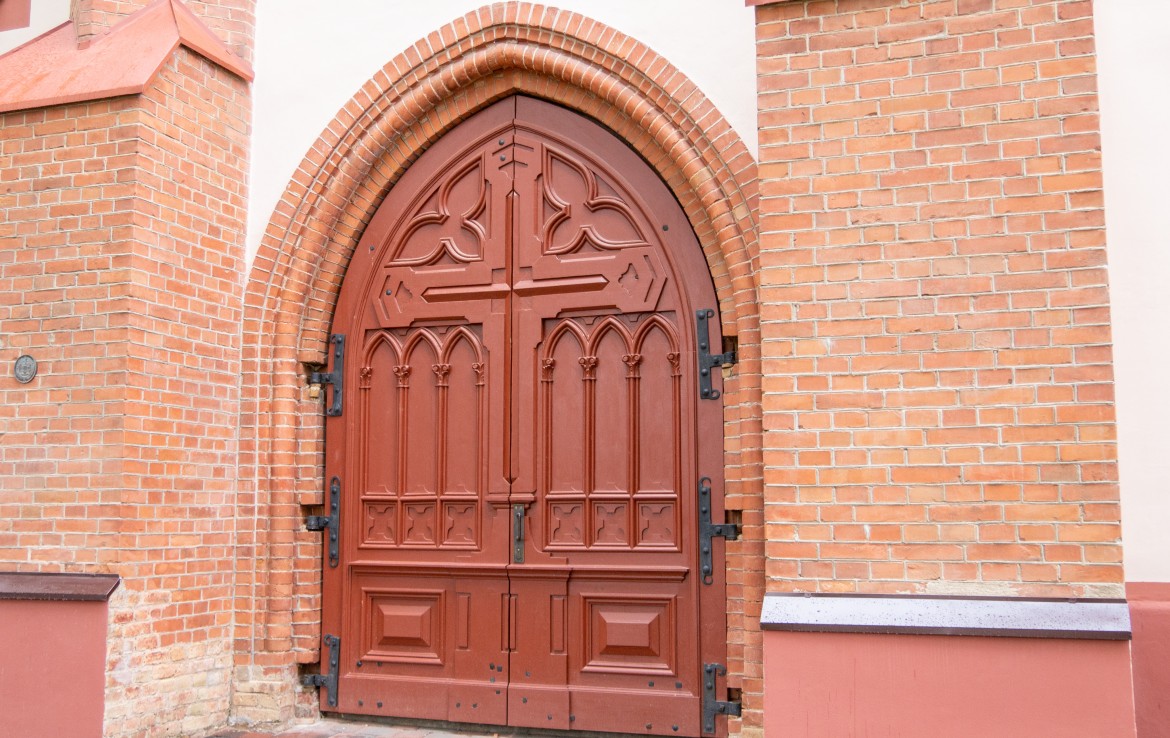 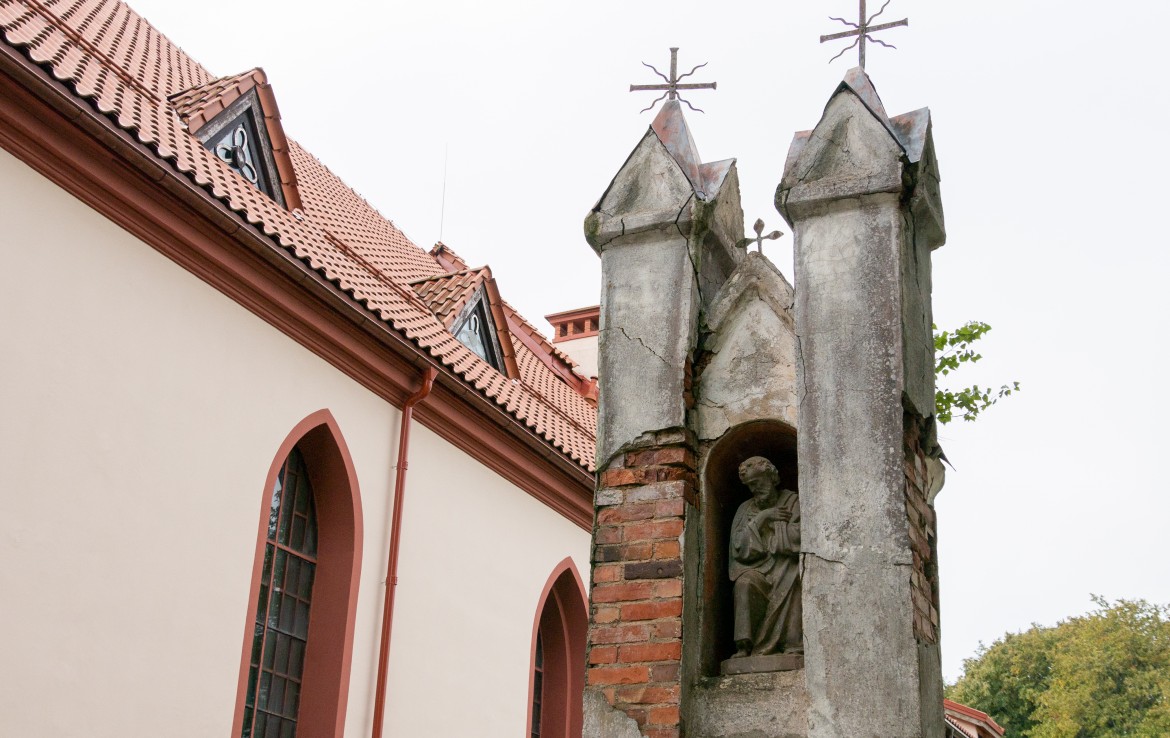 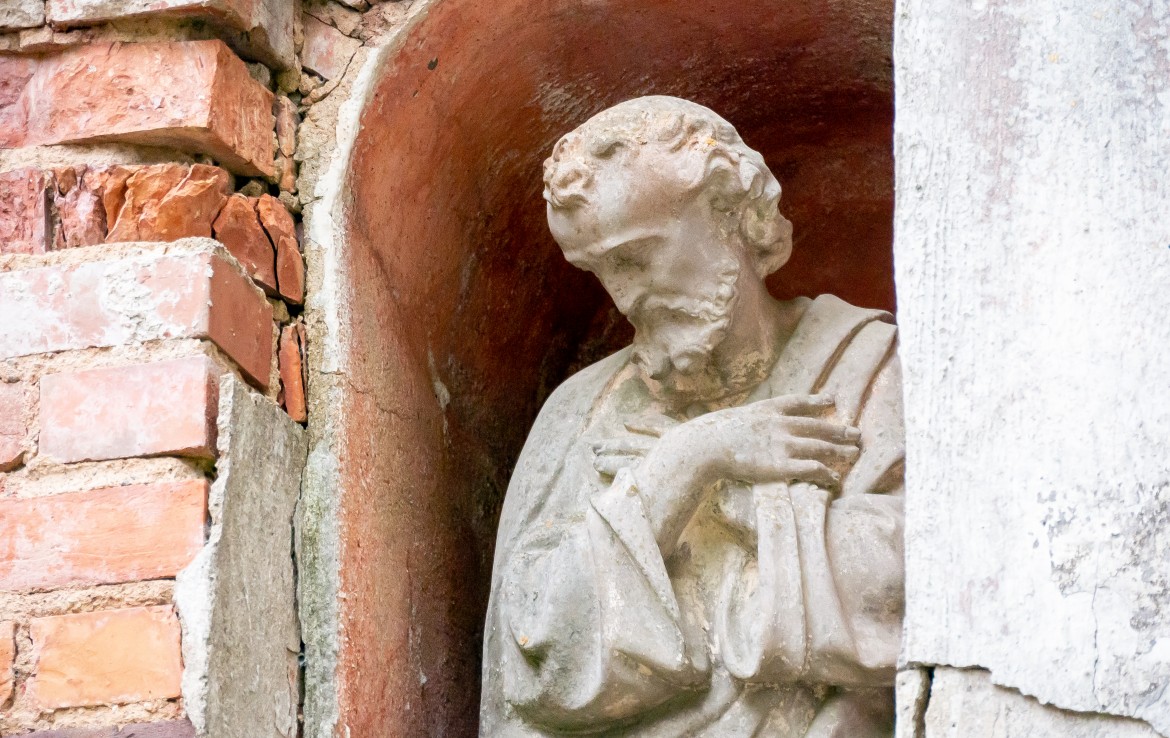 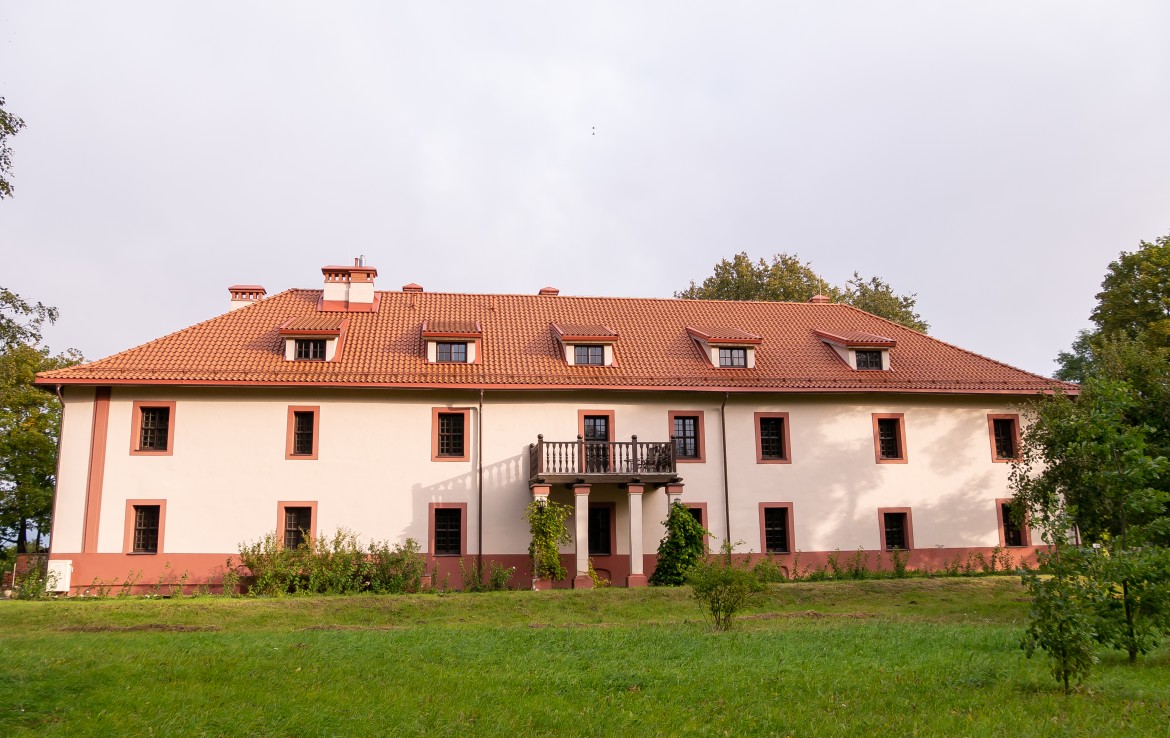 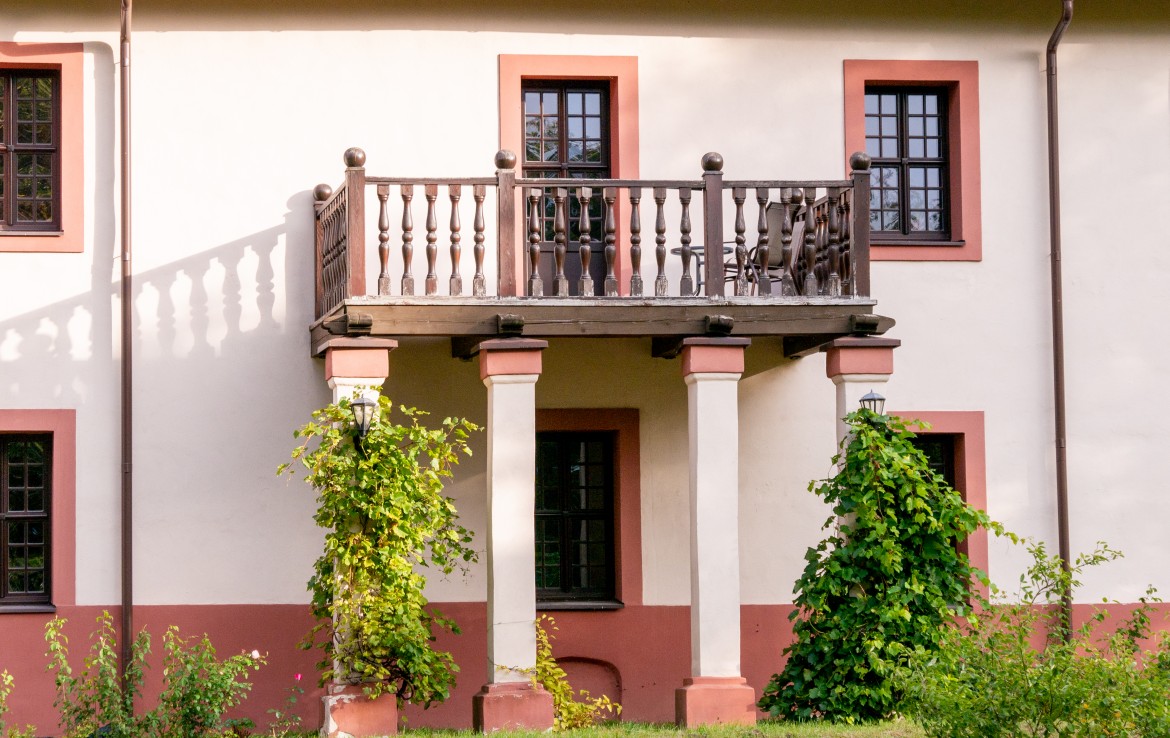 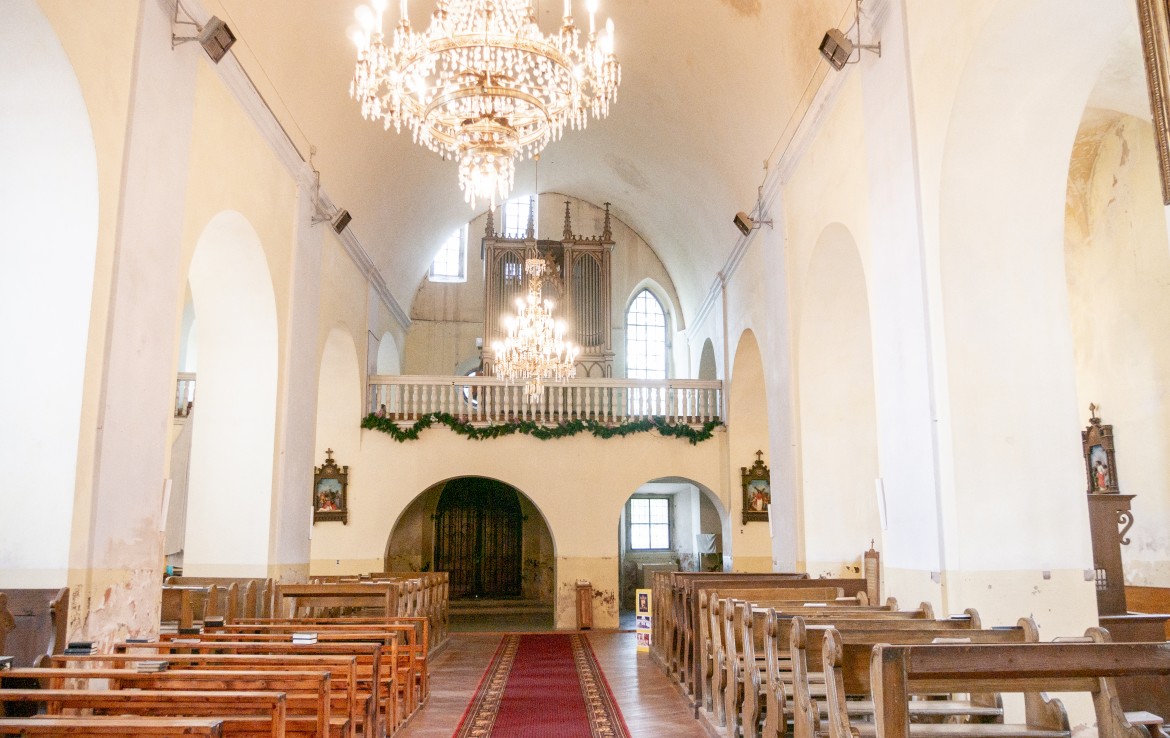 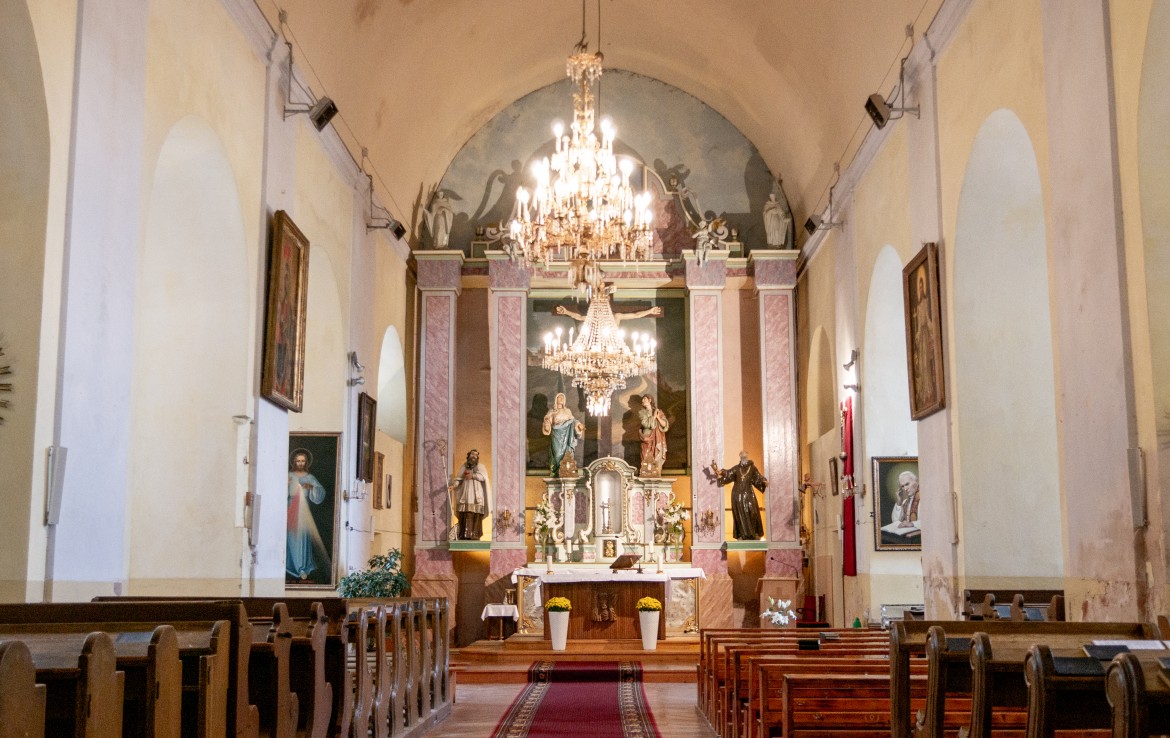 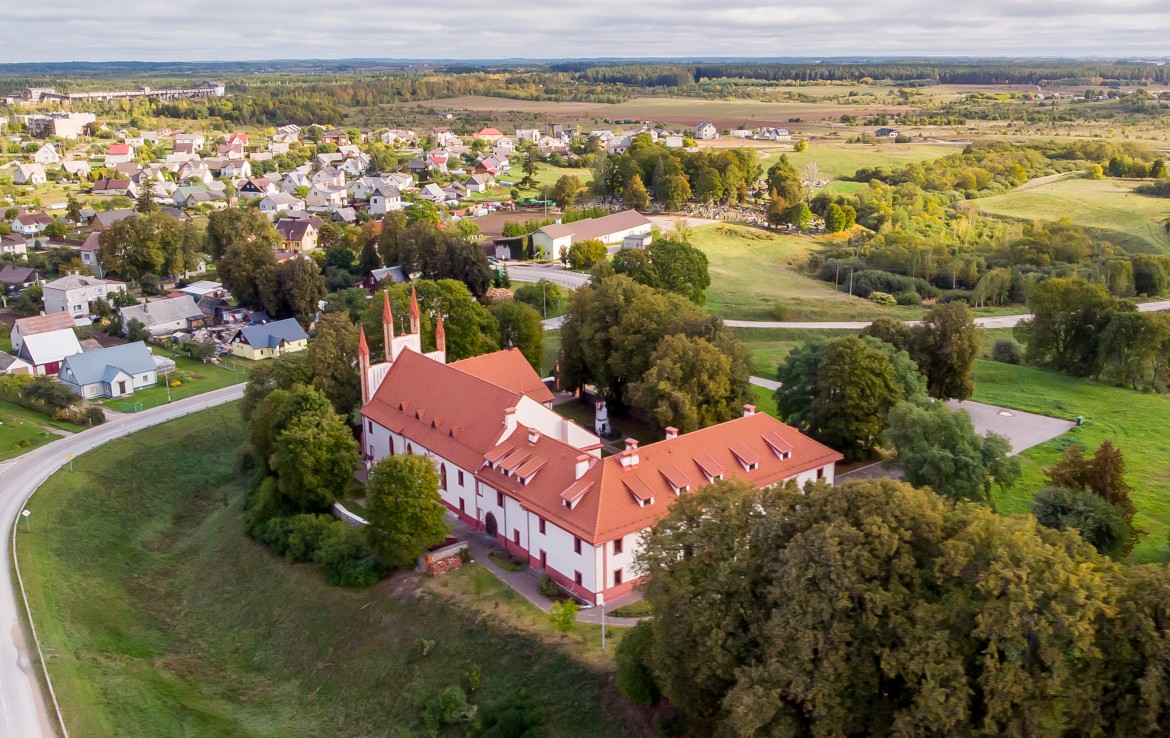 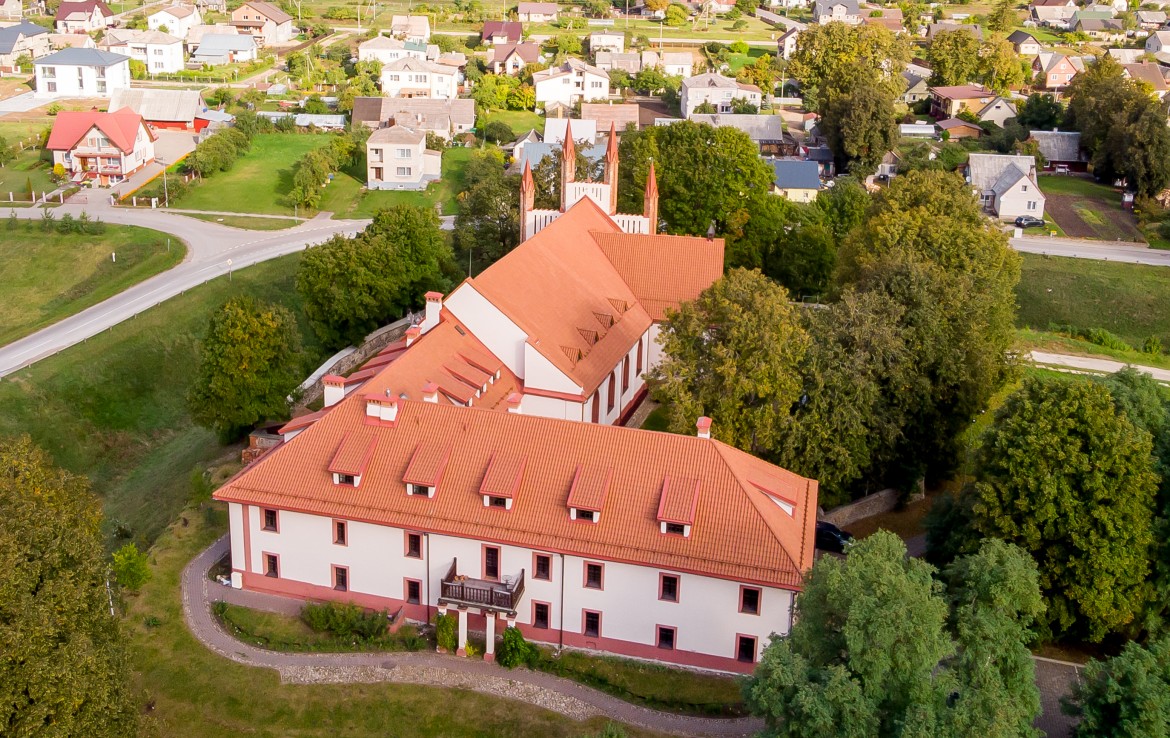 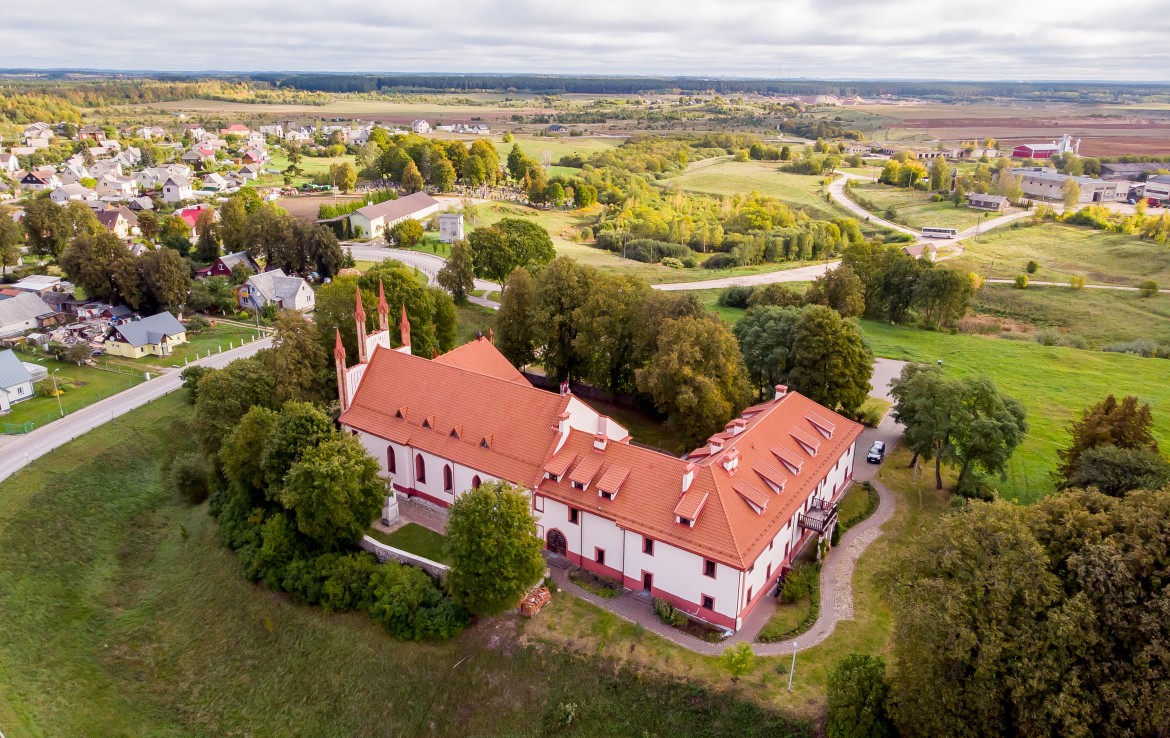 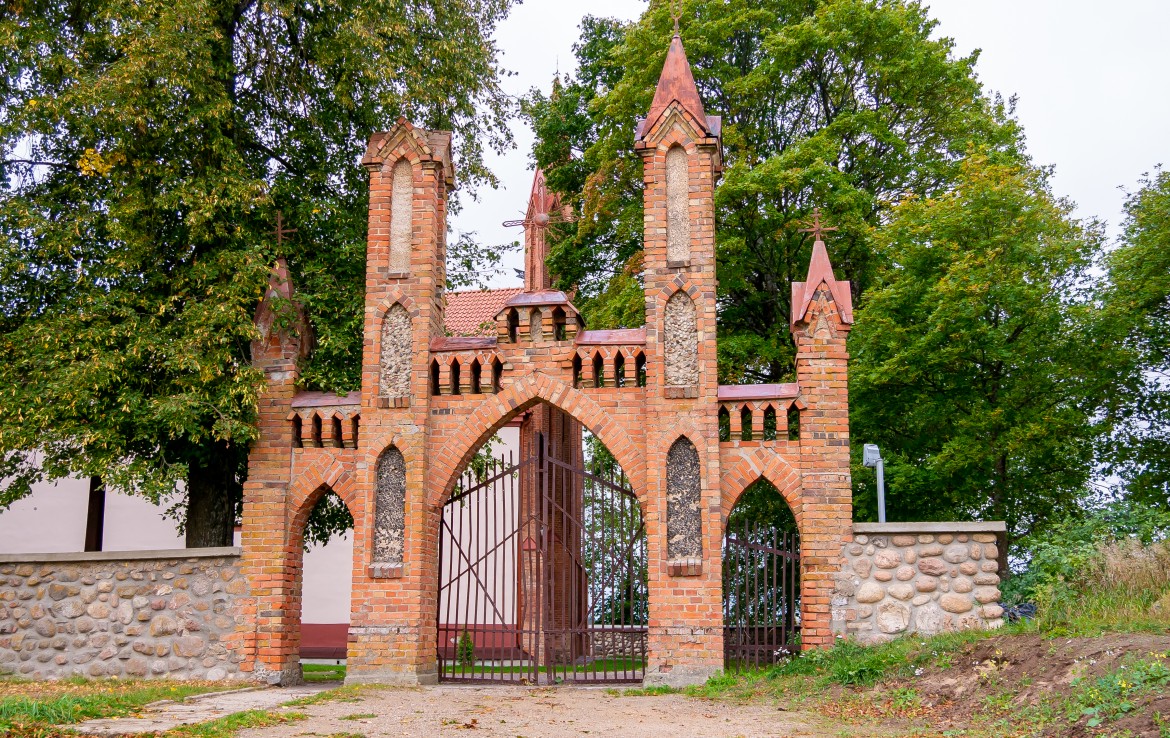 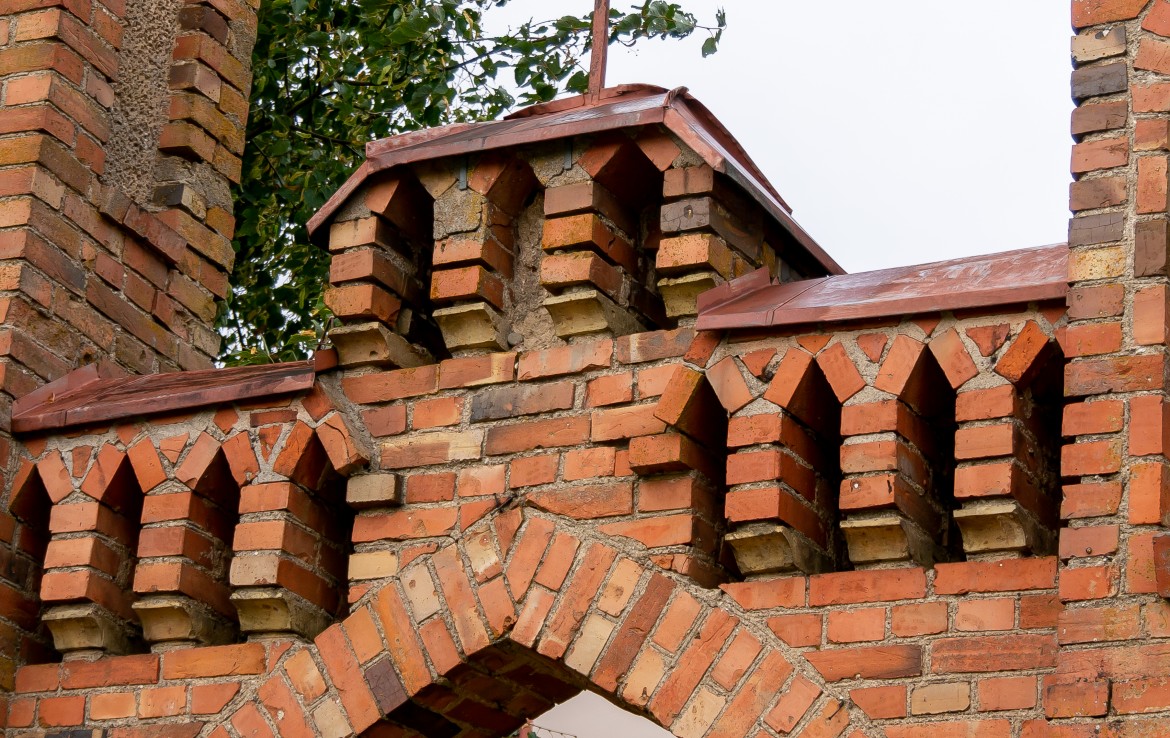 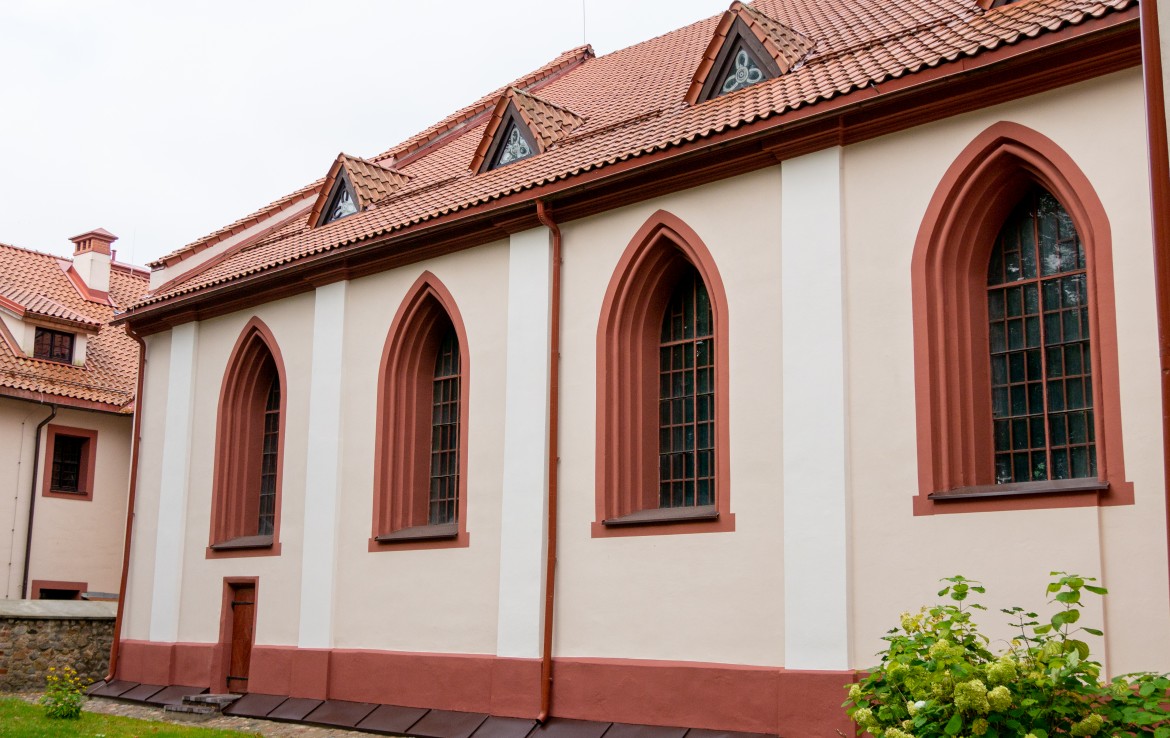 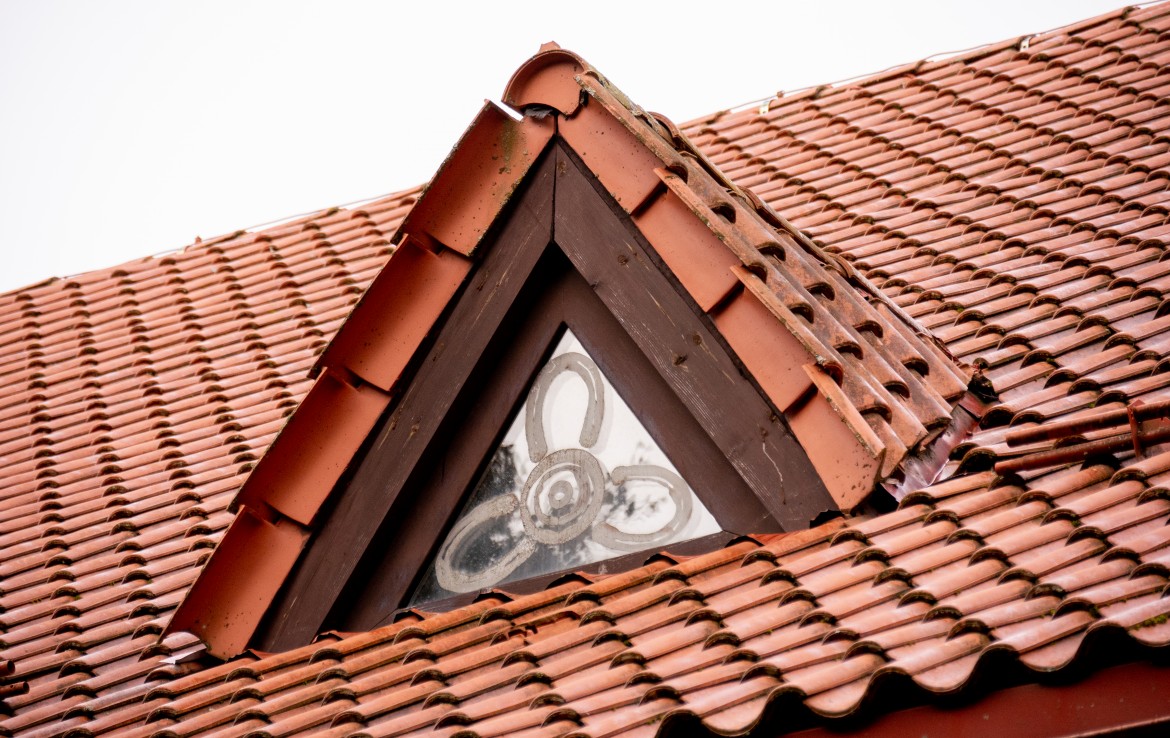 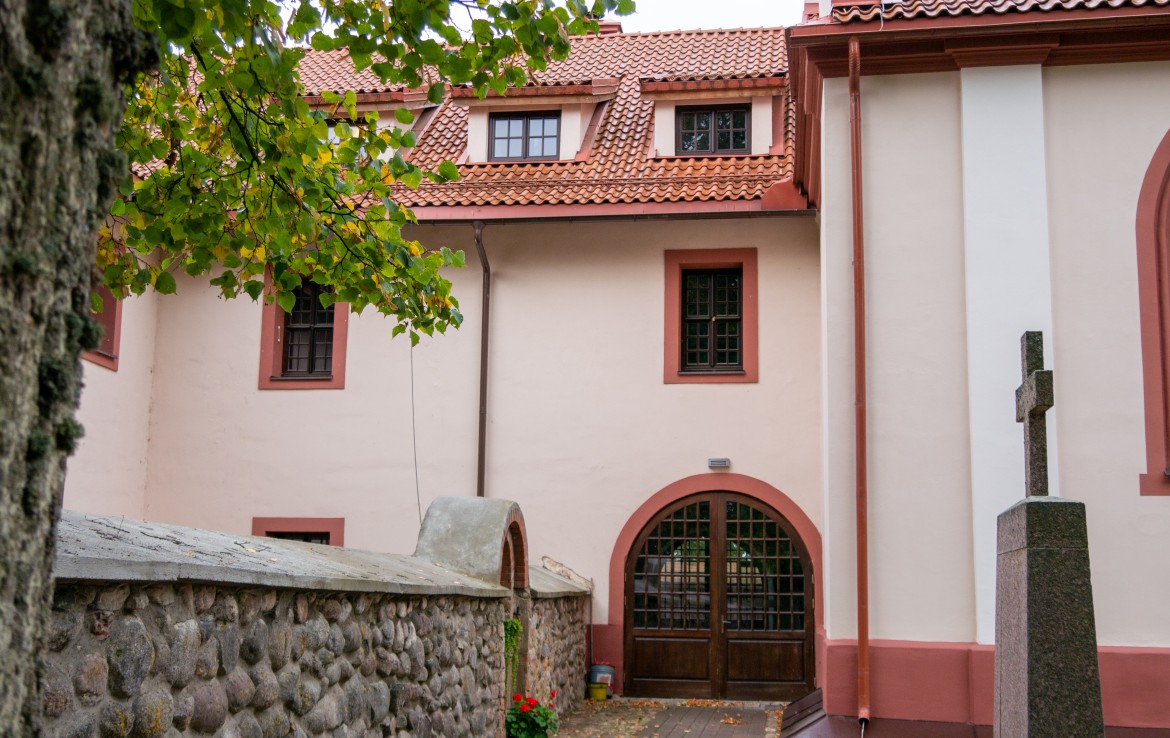 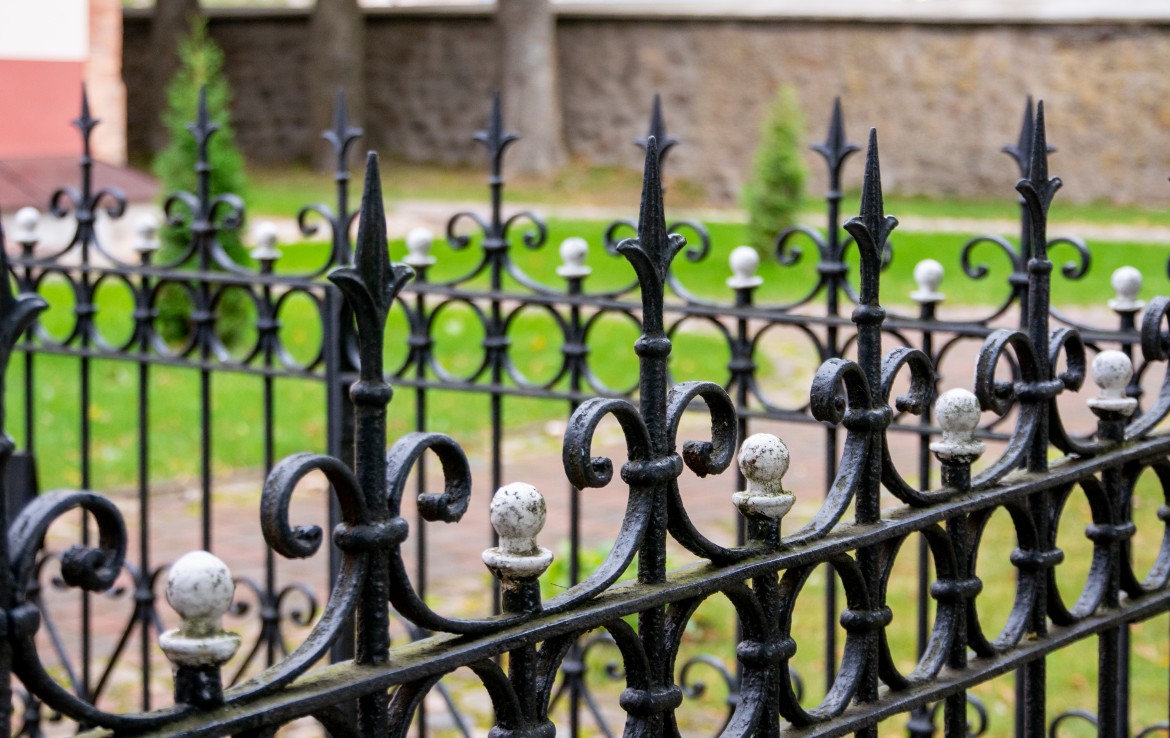