It has been known that at the end of the 17th century, Raguvėlė Manor became owned by the Komarai family, the noblemen. Soon, this place became the homeland of this family. The present ensemble started to be formed under the rule of Ignotas Komaras in the 70-80-ies of the 18th century. After Juozas Komaras becoming the owner of the Manor at the end of the 18th century, on his initiative, representational and sacred buildings were erected: the former two-storeyed building was expanded, the integral Classical appearance of the Manor formed, a maintenance building, a wheelwrighting building, granaries, an inn and The Church of St Stephen the Deacon were built. The second stage of the works of Raguvėlė Manor construction took place after Konstantinas Komaras, the son of Juozas, became the owner. At that time the cemetery was established and chapel-mausoleum of the Komarai family was built. Until the very beginning of the Second World War, the owners were engaged in cattle breeding activity, a water mill was operating here, a dairy and distillery with a storage facility as well. In 1940 the Manor was nationalized, and the agricultural school was established here, which was reorganized into a high school after the War, and later – into the school of beekeeping and horticulture specialists. In the Soviet times, for a long time, Raguvėlė eight-year school was operating in the Manor, which later became a nine-year one, while the other buildings of the Manor belonged to the local soviet farm. In 1992, the complex of the Manor’s buildings was returned to the heirs and restoration works on foundations started.

The Manor built in the style of High Classicism, was completed at the end of the 17th – the beginning of the 18th century. The building is rectangular in plan, two-storeyed, with a garret. Two stages may be distinguished in the construction of the Manor: first of all the two-storeyed structure taking up the south part of the present Manor was finished, which later (at the end of the 18th – the beginning of the 19th century) was doubled in size and a Classical integral expression was formed, and a portal added.   The main accent of the Classical style Manor, the open portal, has a decorative pediment, embellished with relief stucco works and held by four massive columns of Doric Order, and the frieze of the entablature, decorated in animalistic motifs. On the rear facade, above the closed tambour of the ground floor – an open balcony on the first floor. In the Soviet times, in order to adapt the Manor to meet needs of that time, the original enfilade planning of the interior spaces, which used to be characteristic of the manors of the period, was damaged – the layout re-designed to a corridor-style planning.

The wheelwrighting building, built in the Classical style at the end of the 18th century is rectangular in plan, single-storeyed with a basement and a mansard. The building sits on the foundation bricked of field stones, the basement floor is of field stone masonry with fine rubble aggregate, the walls – of red ceramic bricks, plastered. The roof has hipped-gable shape, a slightly recessed porch can be seen in the main facade, supported by four masonry columns. The openings and niches of the building are decorated with red brick masonry trimmings, the cornices of the garrets are decorated with profiled plastered bricks.

The maintenance building of the Manor has a similar appearance. It was built at a similar time in Classicism style, rectangular in plan, single-storeyed, with a mansard, which is top-covered with the hipped-gable roof. The porch of the maintenance building like that of the wheelwrighting building is slightly recessed, decorated with four masonry Ionic columns. The garrets are decorated with a profiled cornice running along the entire perimeter. 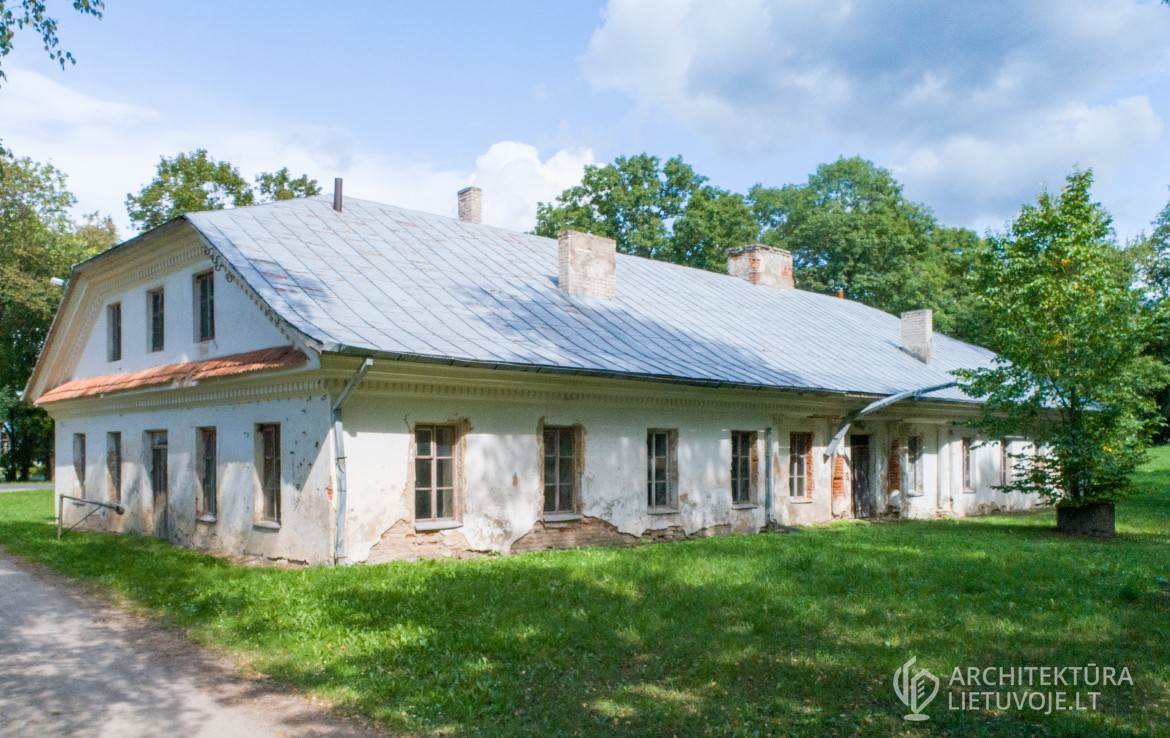 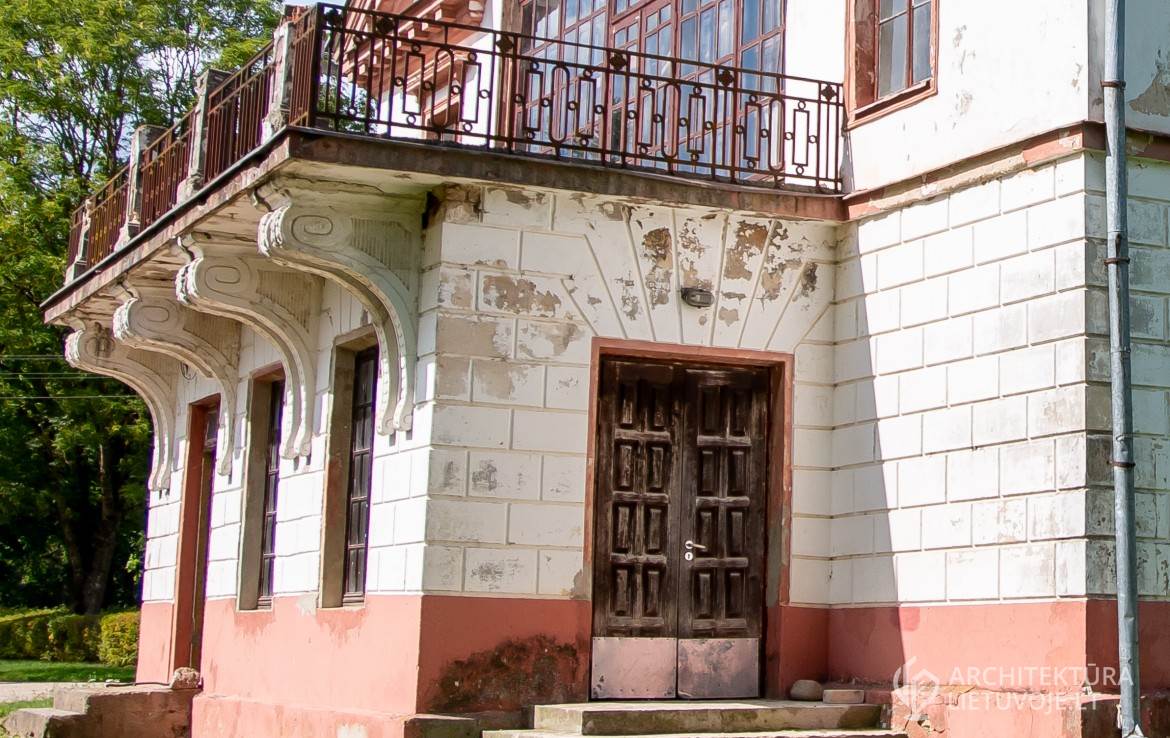 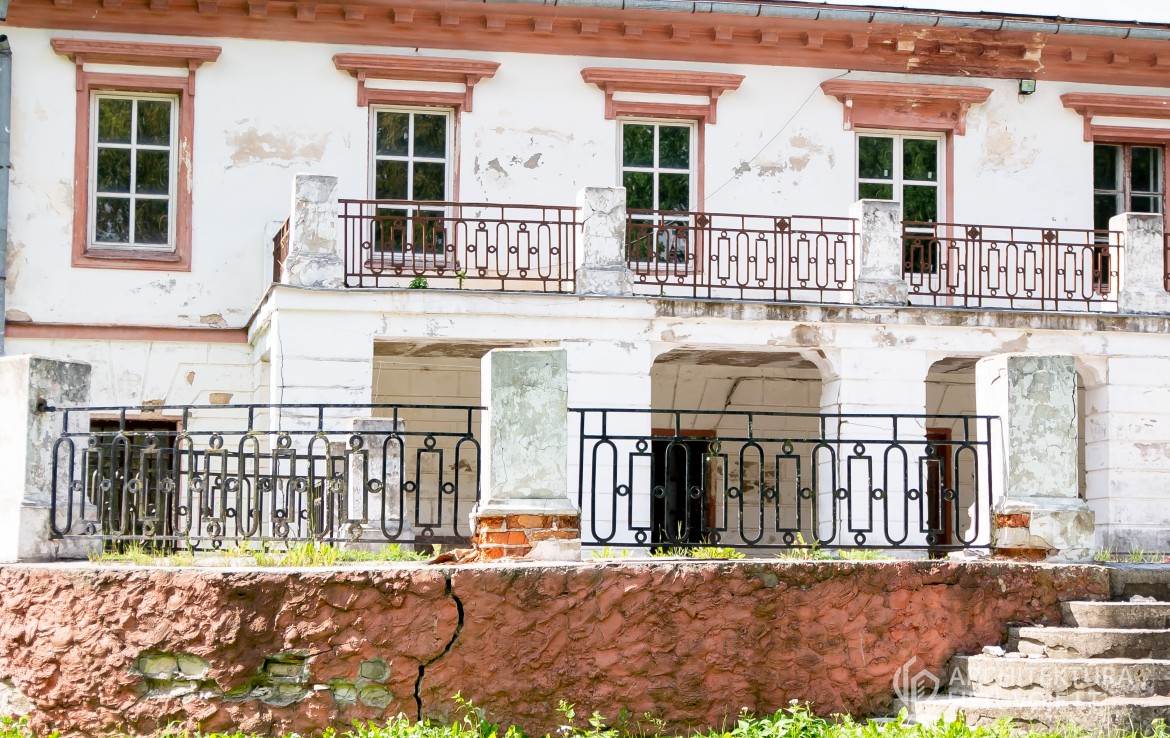 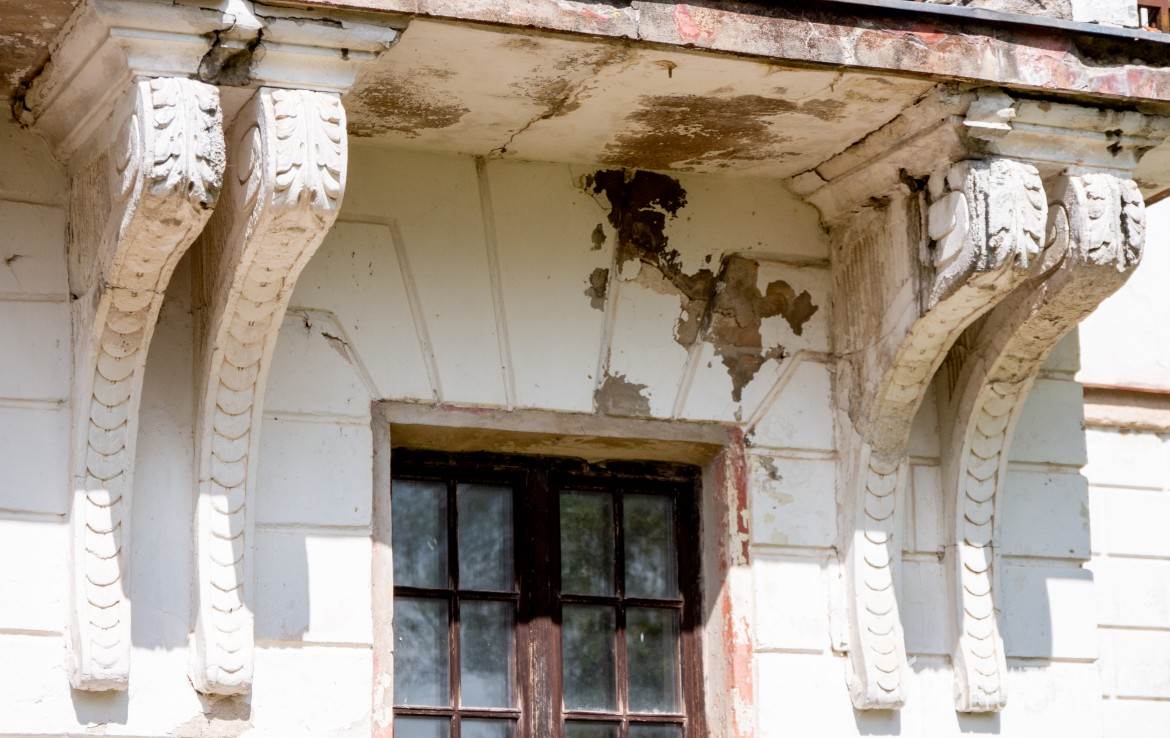 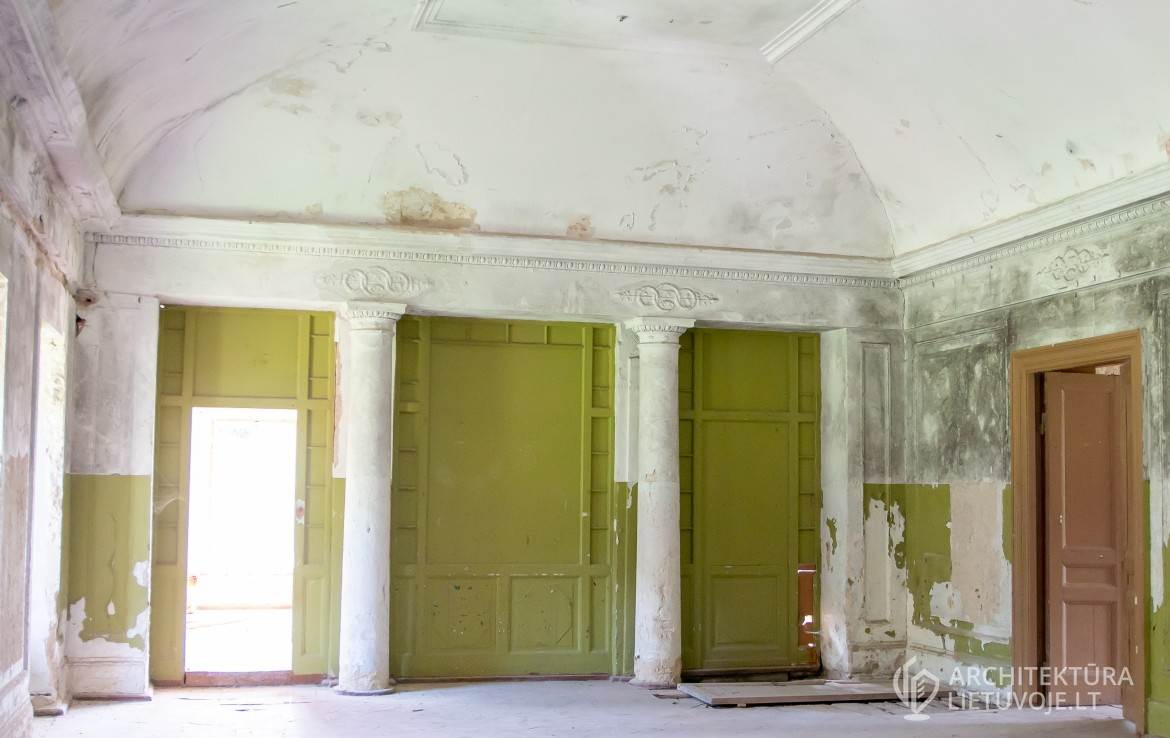 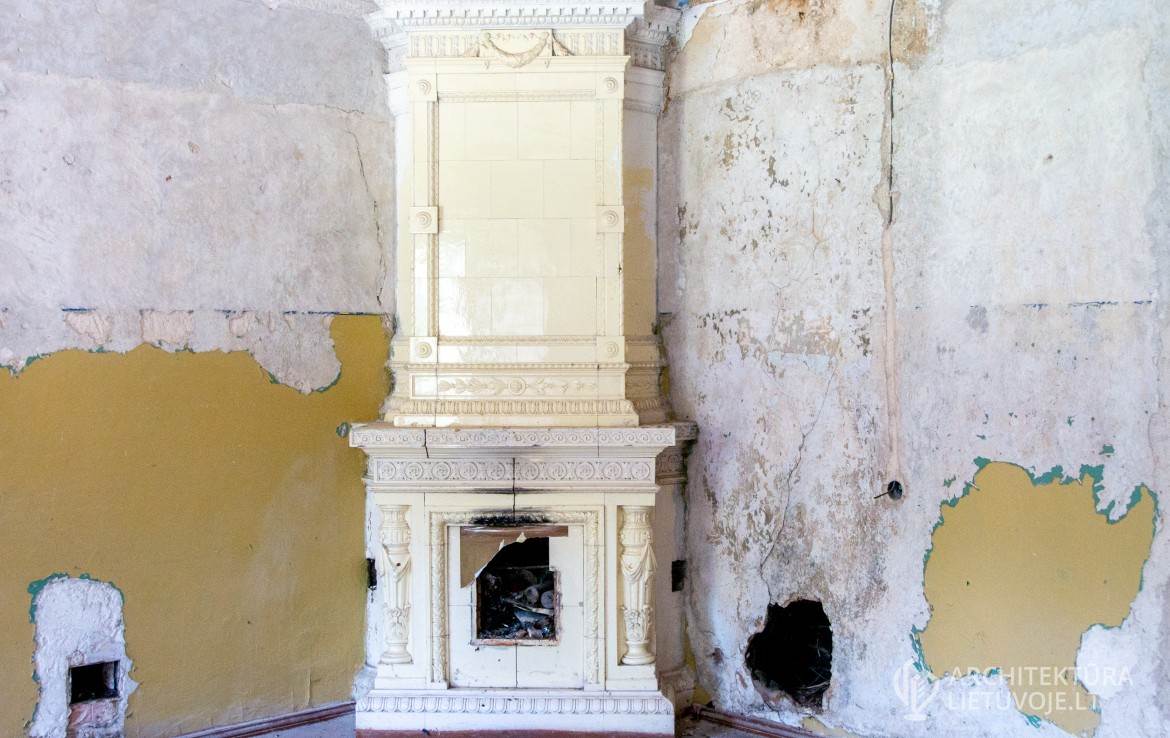 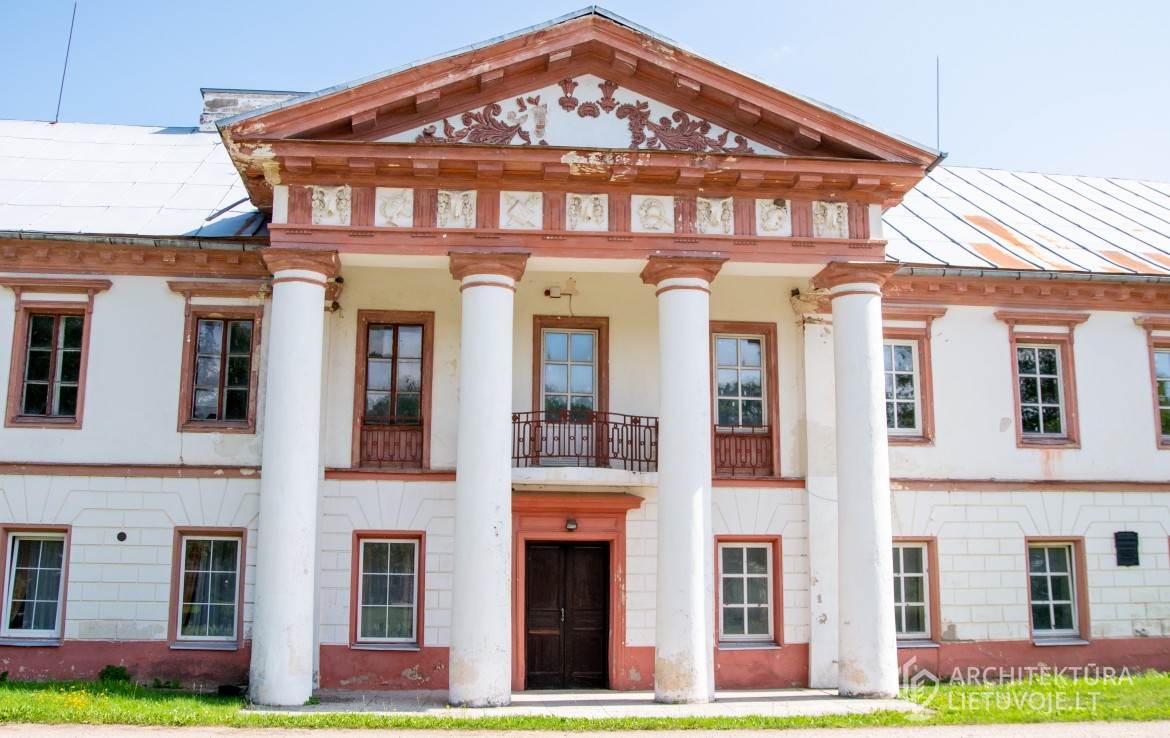 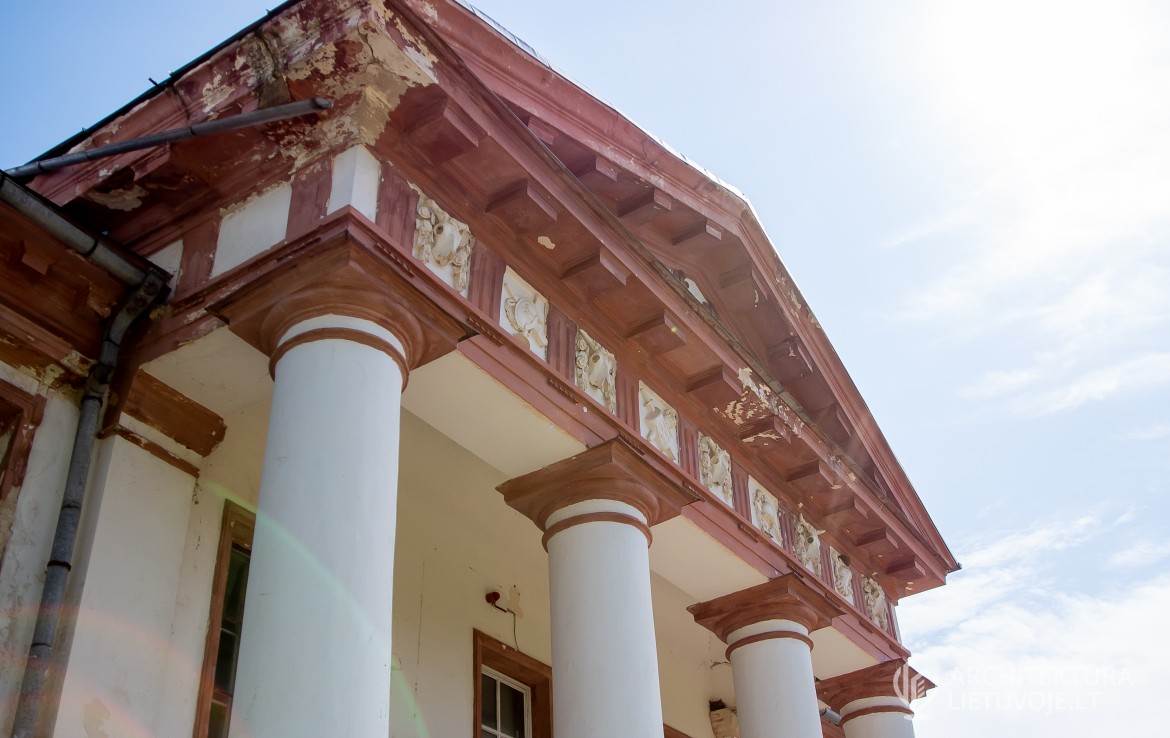 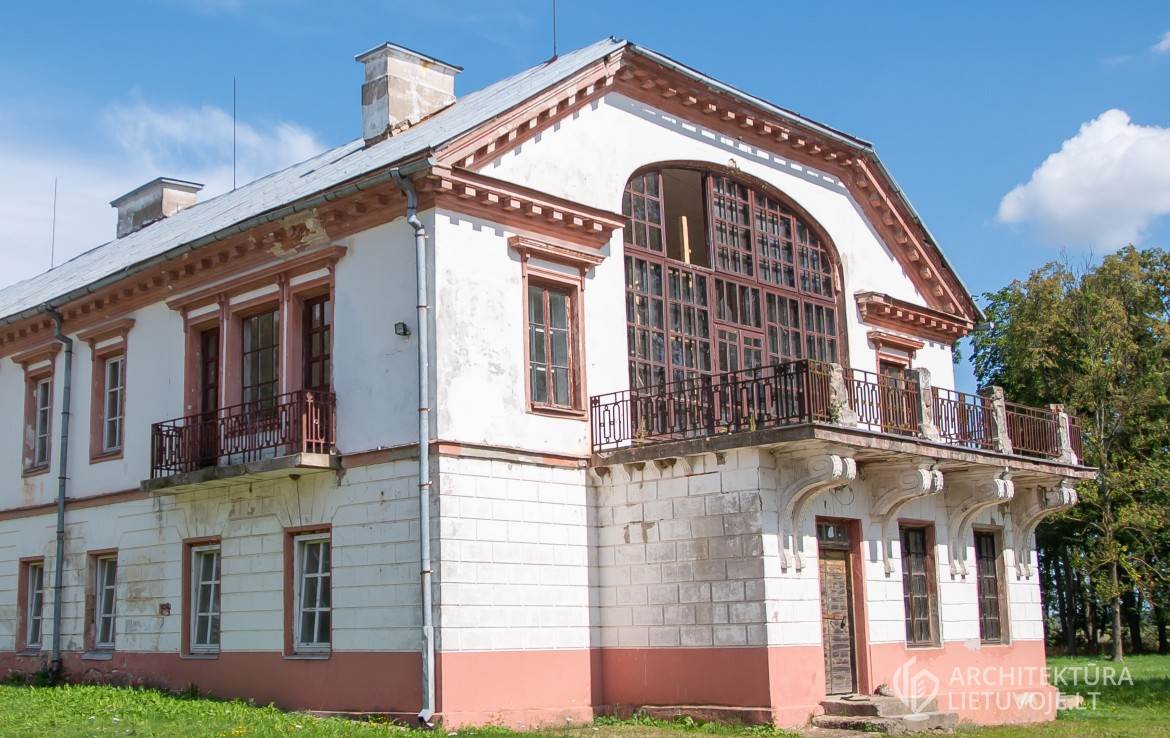 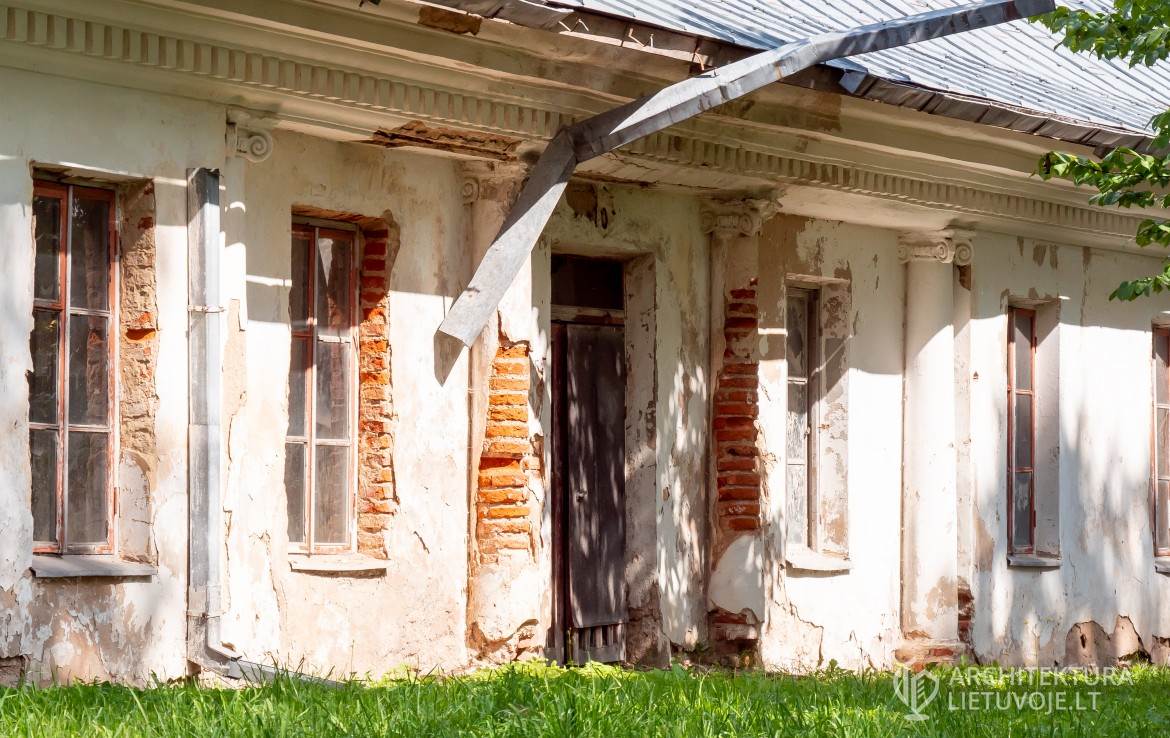 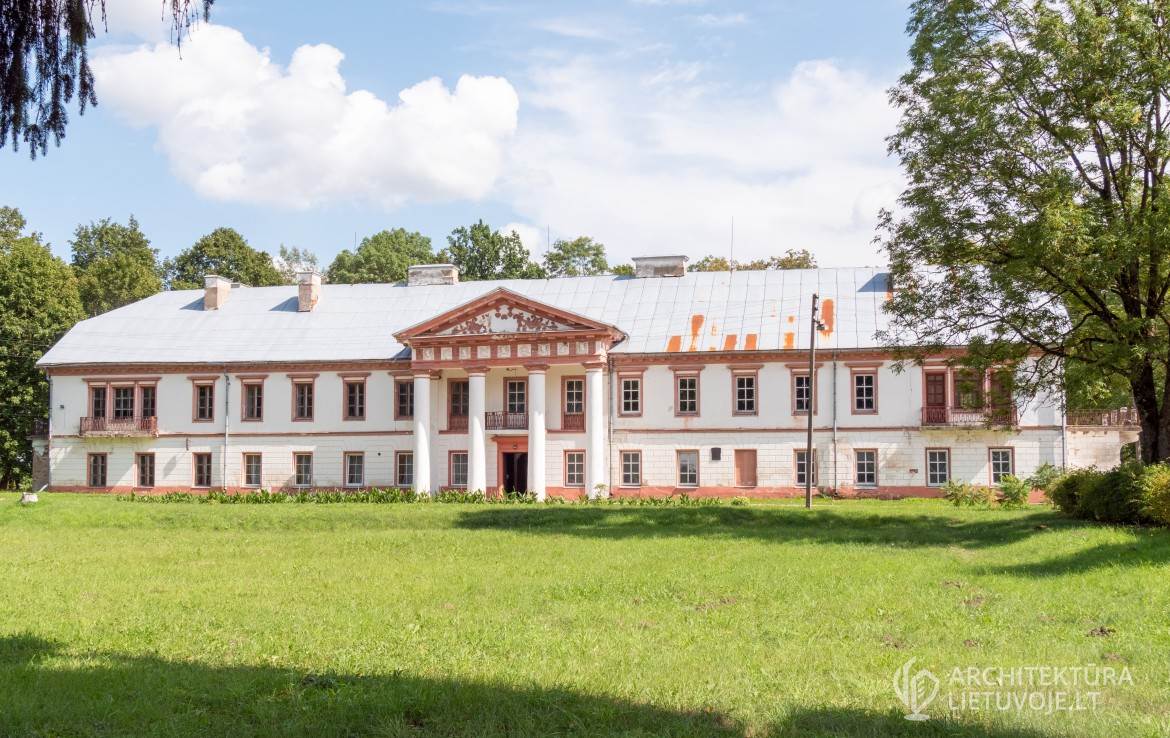 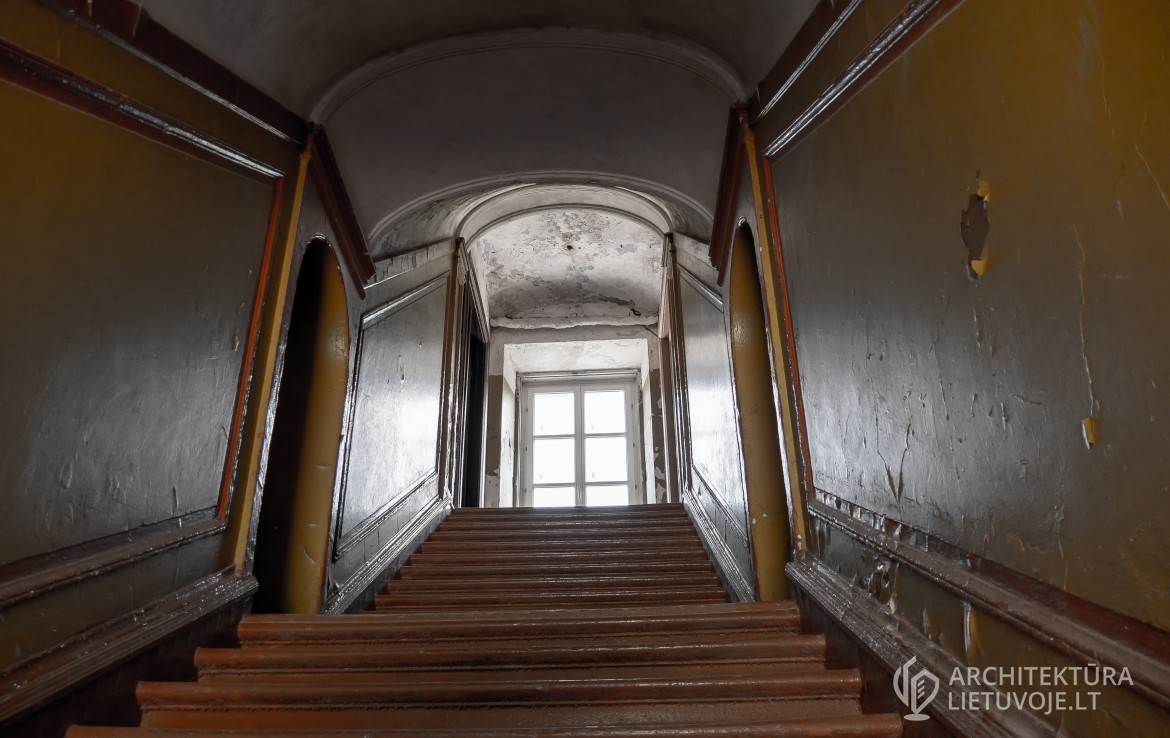 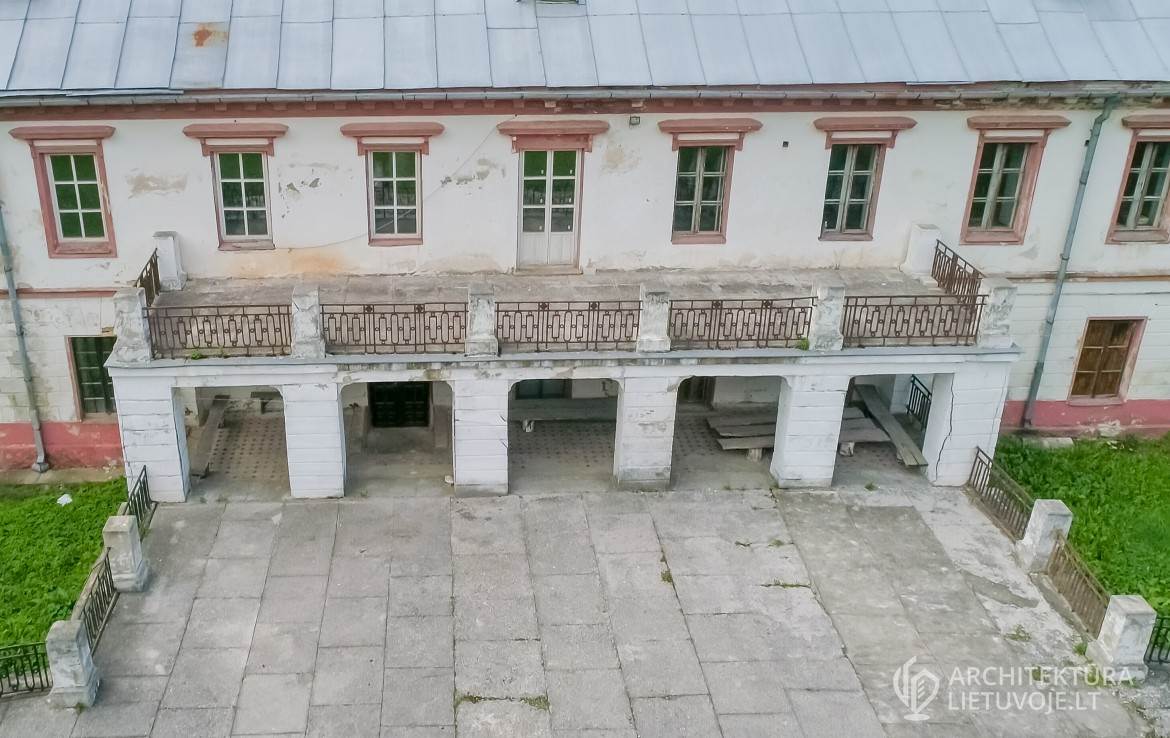 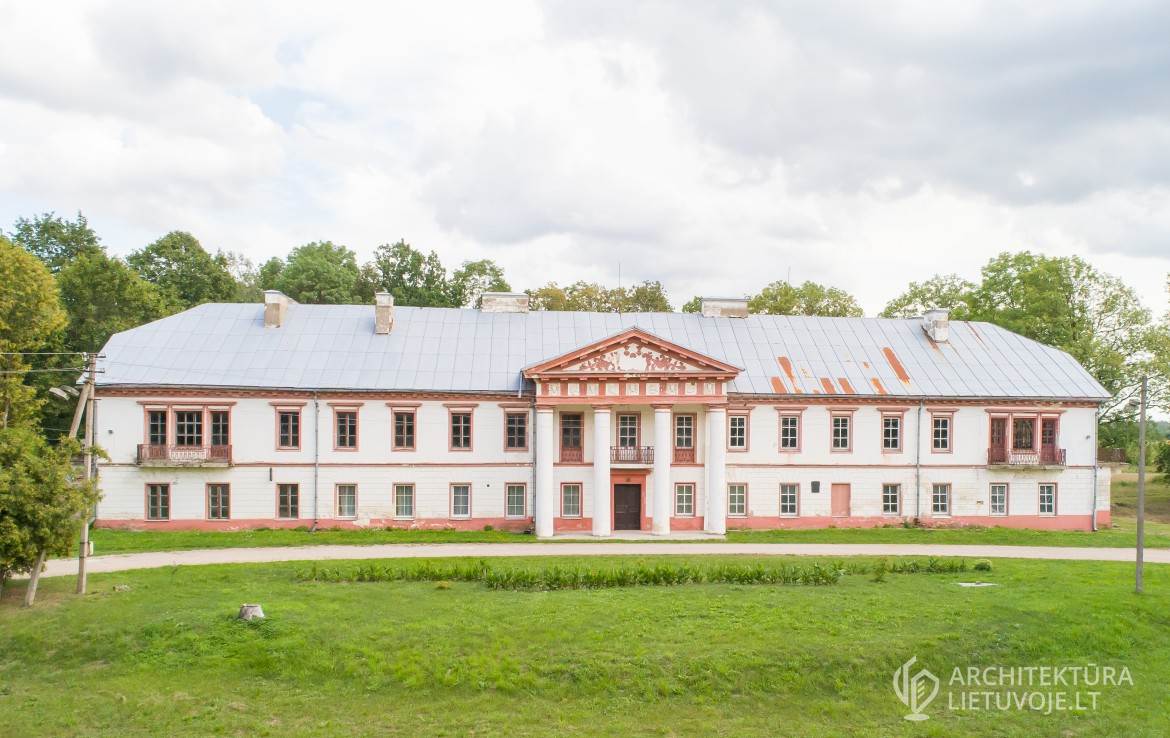 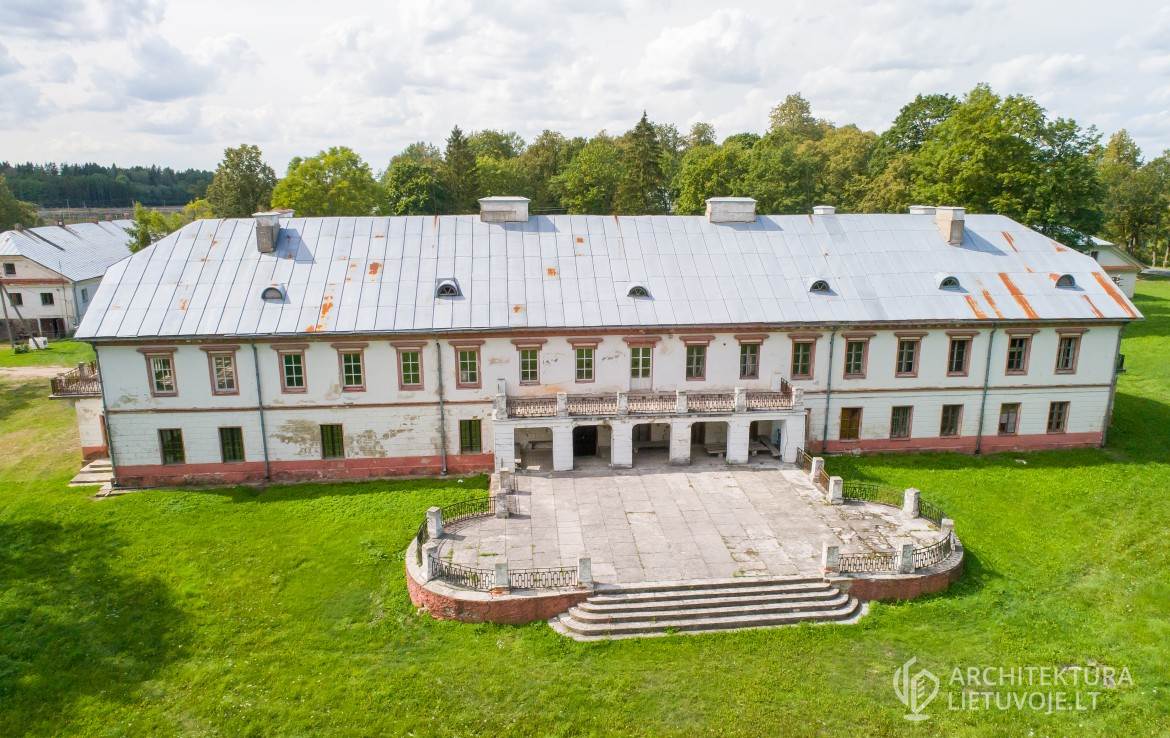 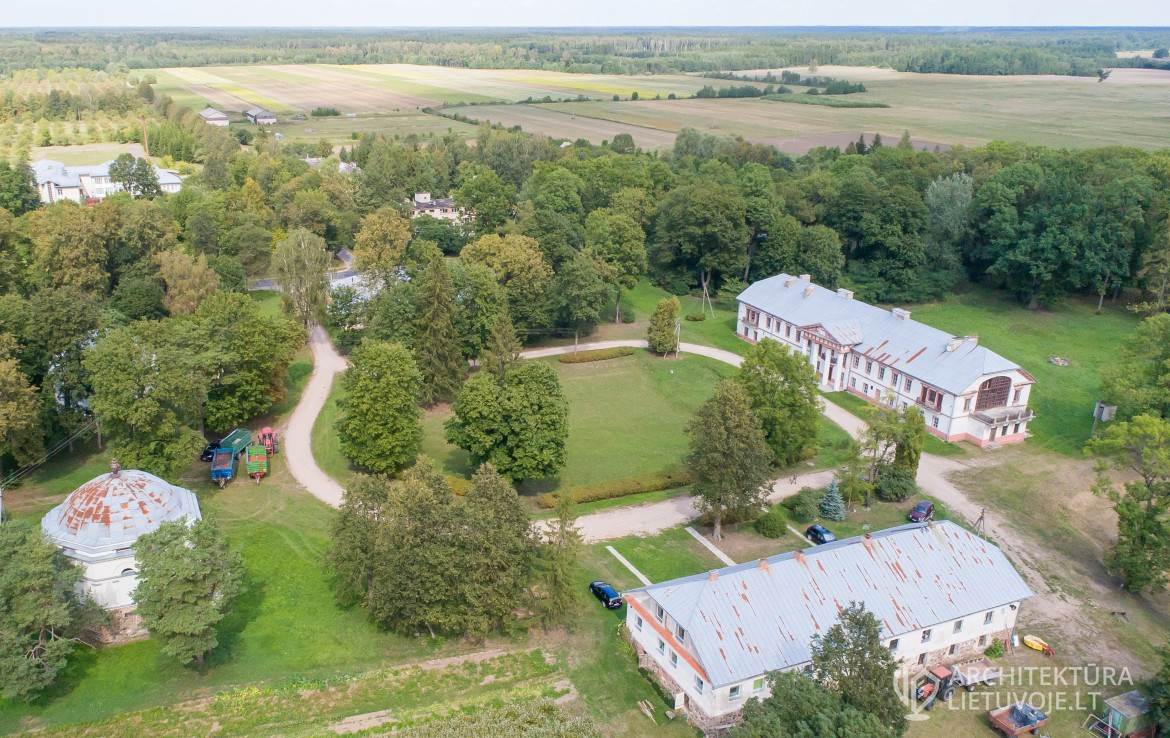