Industrial architectural heritage in Lithuania has been ignored for a long time. Even most exquisite inter-war buildings of this function that mostly reflected the main direction of industry of Lithuania, the agriculture country, food production, was not an exception. “Pienocentras”, which unified dairy cooperatives of the country, was one of the largest enterprises of this country and increasingly expanded its activity. Soon, apart from dairy production, activity was directed towards egg industry, while later – to modernization of processing, trade and production of fruit. A chain of branded shops and eateries occurred throughout entire Lithuania as well. New modern dairies, emerged throughout Lithuania on the initiative of the company, as well as buying stations and other type production and structures and outbuildings became the symbols of the rapidly developing modernization of the country. Many of these structures have become not only most advanced technologically places in the periphery, but, quite frequently, they were only one example of Modernist architecture in small settlements. Kaunas, which was a temporary capital at that time and a strategically important food industry centre, needed a large building for production execution that would be able to serve the entire region in the neighbourhood.

In 1934 designing works were commenced, and the complex was developed gradually – its different buildings had architects and engineers working on. These specialists today are held celebrities in their field: Bronius Elsbergas, Vytautas Landsbergis-Žemkalnis, Jonas Kova-Kovalskis, Algirdas Prapuolenis, Anatolijus Rozenbliumas. In 1935 the first part of the future ensemble was completed. The industrially utilitarian facade of red bricks on the front side of the B. Elsbergas‘s refrigerator building is accentuated by twin small towers, reflecting one of the main Modernism criteria: the building must serve not only for aesthetic purpose but for functional one as well. The elevators were installed in the towers. On the top of the towers, one can see the personal “autograph” of the architect, which can be seen in many buildings designed by him: small short juts (bands) set up in several tiers. A peculiar accord develops between the vertical bands of light plaster and main verticals of the façade, when those bands are in sharp contrast with the red brick facades not only due to the colour but texture as well. The side facades are tripled in accordance with the shape of the pitched roof of three segments; on the south east side, the architectural expression of the building is enlivened by three semi-round arches of windows that bring a Classic citation as well. The modern structure of the building is reflected by reinforced concrete supporting poles that can be seen on the ground and the first floors – the spiral stair inside the building has survived as well.

The building of the Dairy itself appeared in 1936. Marija Drėmaitė, the architectural historian, having investigated the fact that although the Danish company that has sold technologies of the structure to “Pienocentras”, proposed its own typical project for the building, yet, the architect V. Landsbergis-Žemkalnis make decision to draw up a project of the original architecture. Like the Refrigerator facility, the Dairy is roofed with pitched roofs of three segments – yet this detail here is much more accentuated in the architecture of the building: on the side facades, the image of three adjoined identic buildings is created. Tripled windows on the side facades trimmed with massive trimmings and joined by them, in the pediments are supplemented with circular fanlight windows. The massive windows of the main facade facing the east may be considered a direct echo of the Modernism aspiration – this way a working environment, healthy and illuminated with natural day-light was created. The main accent of the slightly asymmetrical facade – a red brick avant-corps with the verticals of windows and circular day-light one, partly citing the building of the Refrigerator. Like in the Refrigerator facility, the ramp continues to highlight the industrial purpose of the building. One can see the results of the modern reinforced concrete structures and the main stairs survived.

Kovalskis, the representative of young architect generation of that time, who was rapidly climbing the career ladder, in 1938 drew up a project of a storage facility. Here, the Modernist forms much more combine themselves with the interpretations of stylized Gothic style storage facilities: not surprisingly that the pitched roof is accentuated much more here as well. The side and middle volumes of the building face by their ends the street and are not plastered, while the small pointed-arch fanlights, integrated in the pediments, and the doors in the central part reflect the romanticized elements of the past that had returned to the European Modernist architecture at the end of the fourth decade. The pediments, use of pointed-arch niches and the vertical of the upper avant-corps doors provide the building with impetuousness, compensating the horizontals of the windows, set up in the facades, and those of their interconnection. Light plaster parts, joining the red brick facades of the “Gothic storage facilities” create not only the contrast, but separate them visually as well. The expression of the side facades is supplemented by the plastered vertical of the stairways. Reinforced concrete structures seen in the previous buildings of the complex, are met in the cellar here – on the main floors of the building, riveted steel support poles are installed as well as the beam-type slab. Next to the authentic rails of the stairs survived, one of the most interesting parts of the equipment is the sliding door, designed by the architect himself. Quite impressive are the spaces of these storage facilities as well.

Although the original project of the administrative, commerce and residential building was much more monumental, perhaps due to economic incentives, in 1938 a more modest structure appeared, created by V. Landsbergis-Žemkalnis and A. Prapuolenis. The conservative building reflects a subgenre of Kaunas Modernism of quite laconic architectural expression, frequently seen in the buildings of minor administrative and residential architecture. The most expressive moment, providing the building with a dynamic view – its volume, curved along the street. Window trimmings connect visually the main volume of the building with the single-storey part set up near the gate. An outbuilding was designed nearby as well. Noteworthy is, also, the building of “Sodyba” company’s subsidiary, a factory of juice production, which had been designed by the same authors and by its architecture extends the idea of the first building. This building, abandoned at present, was the last to emerge among all others abovementioned. Interestingly, even A. Rozenbliumas was working on it, who was perhaps the most famous engineer in the field of reinforced structures of this country.

The emergence of the complex in this place received criticism from an urban point of view by some architects and engineers of that time. Although it was one of the oldest industrial districts of Kaunas, still, as the city was developing rapidly, even in the third decade specialists were talking about the need to move it gradually. Irrespective of this, in the so-called Carmelites region, a new complex of “Pienocentras” emerged, as well as new buildings of some other factories – for example, a workshop of “Kauno Audiniai” (Fabrics of Kaunas) built in the Modernist style, which is at the present time integrated into the “Akropolis” shopping centre. The site was determined first of all by a convenient location in the vicinity of both trunk railway and the beginning of Vilnius highway of that time. The river was important as well – even a special ferry in this location was established for the farmers from Užnemunė (opposite bank of the Nemunas river). Irrespective of criticism regarding the location, the new Dairy complex, like the administrative building of the “Pienocentras” (Milk Centre) that had emerged at the beginning of the fourth decade in Laisvės Alėja (Freedom Avenue), became an object of architectural pride of that time, at the same time it was demonstrated as a symbol of industrial progress of this country. 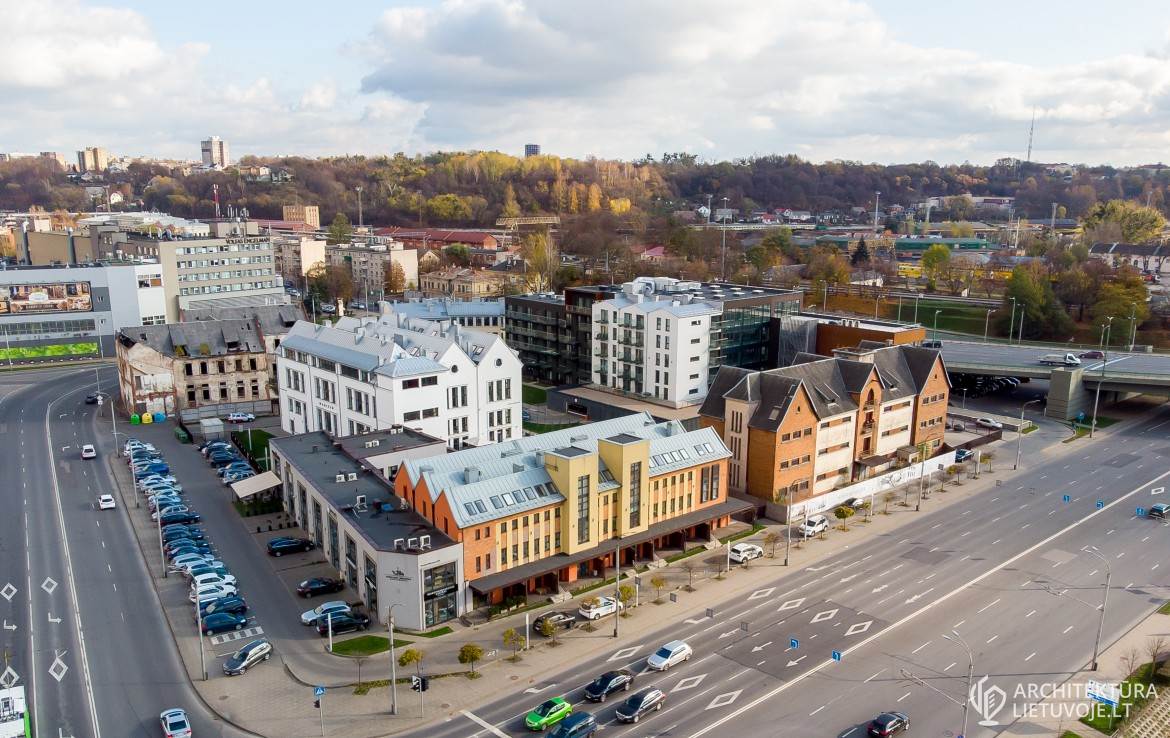 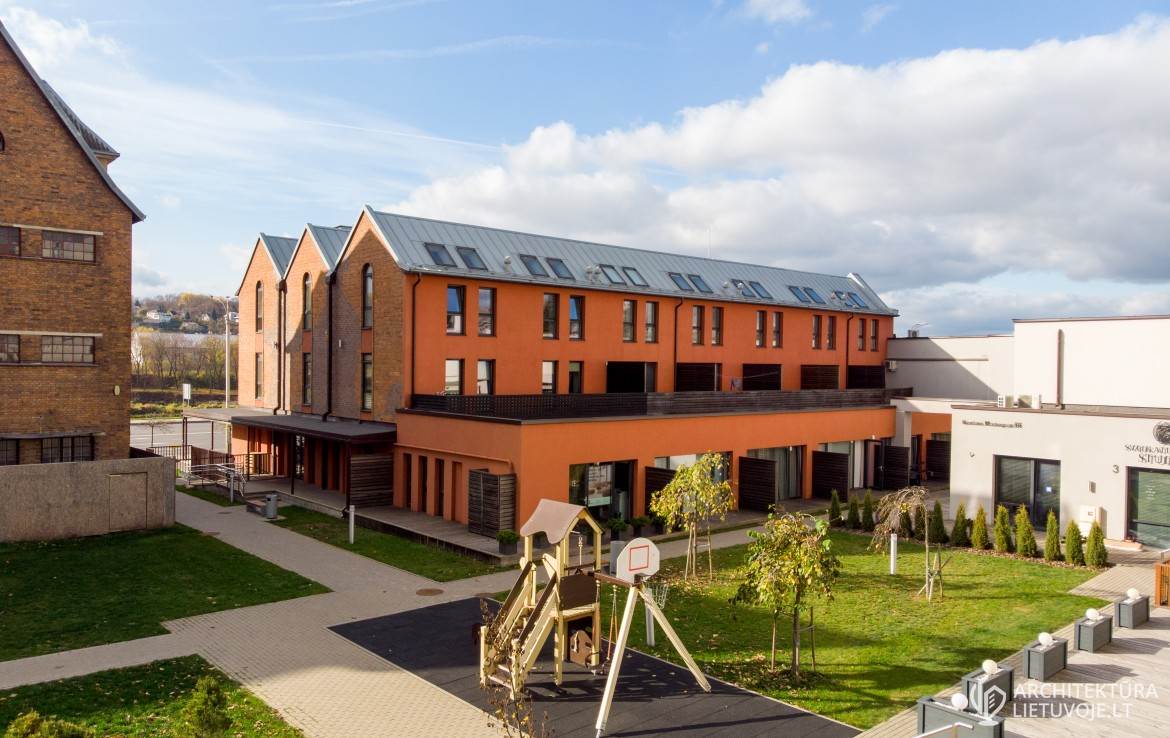 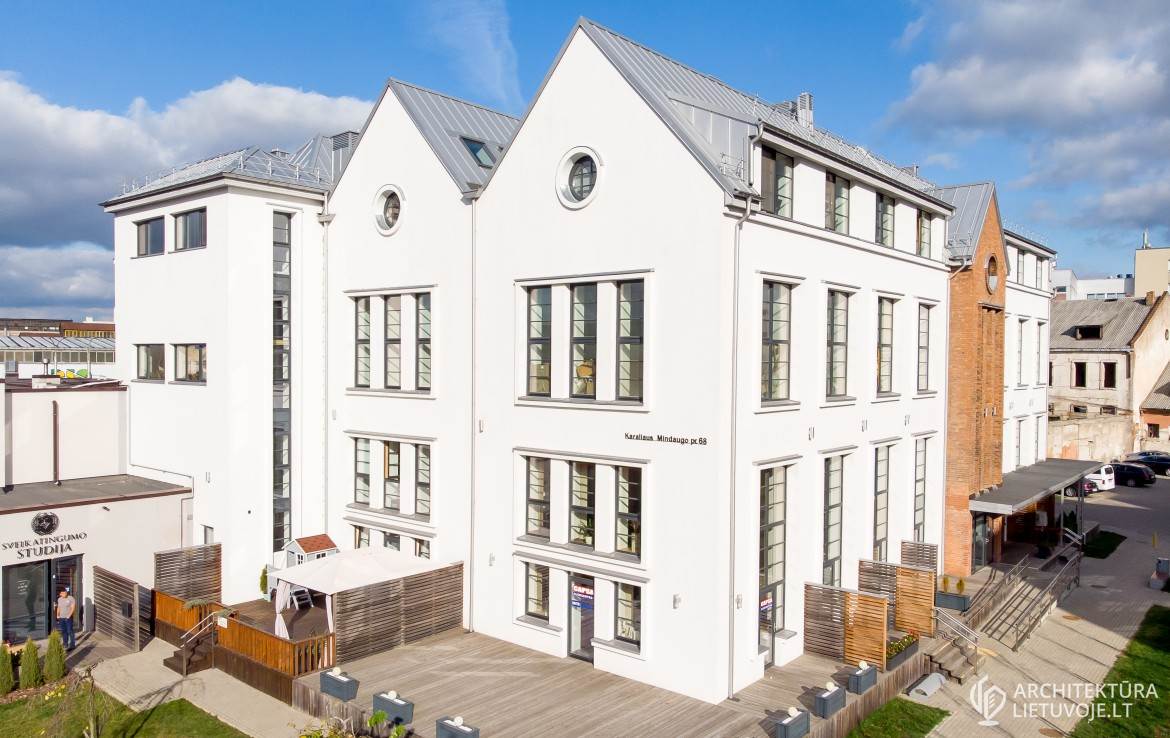 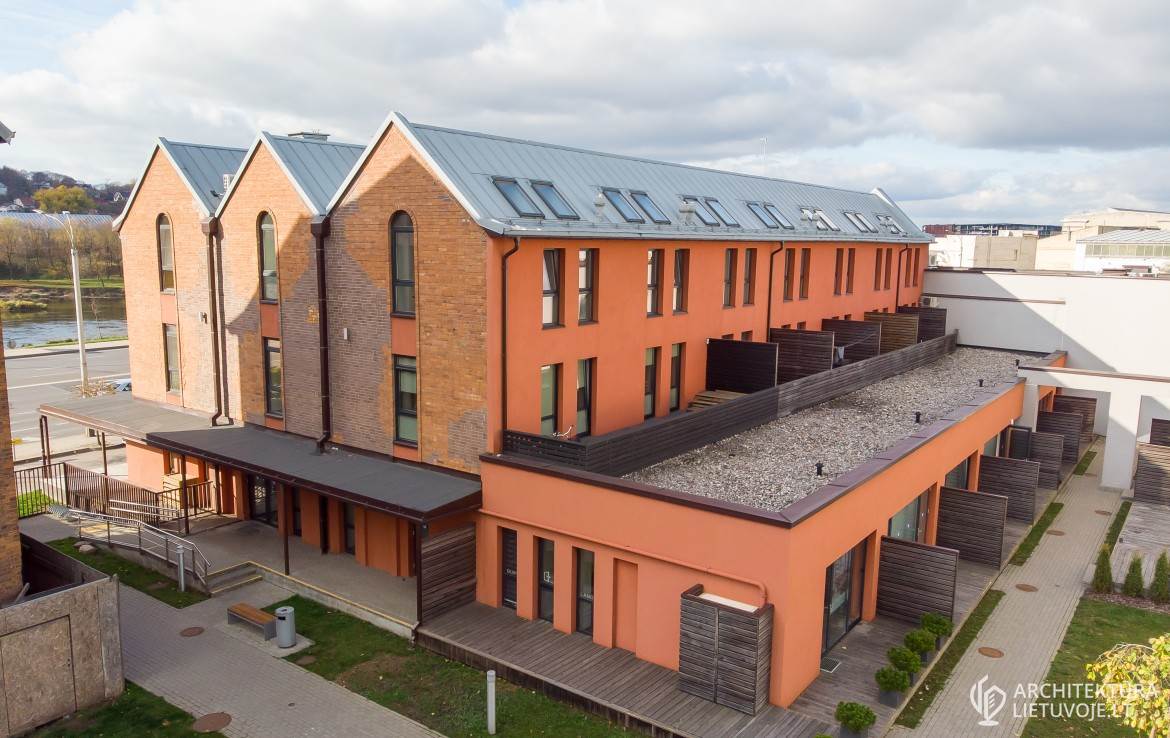 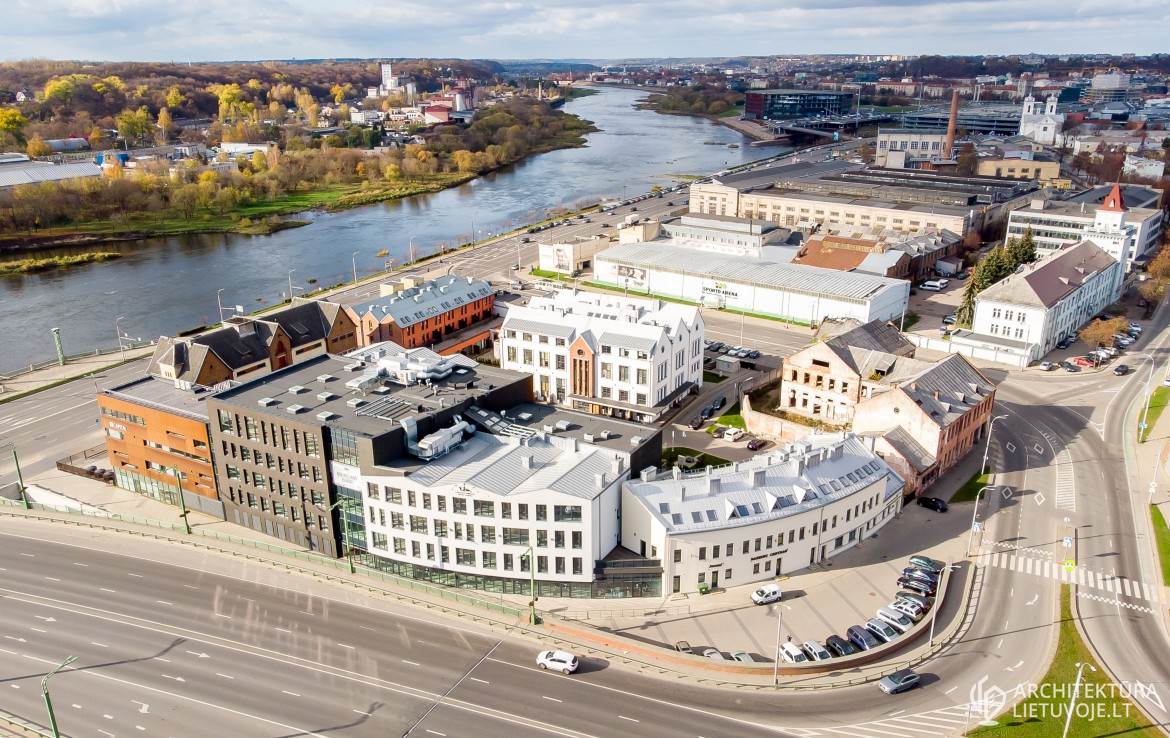 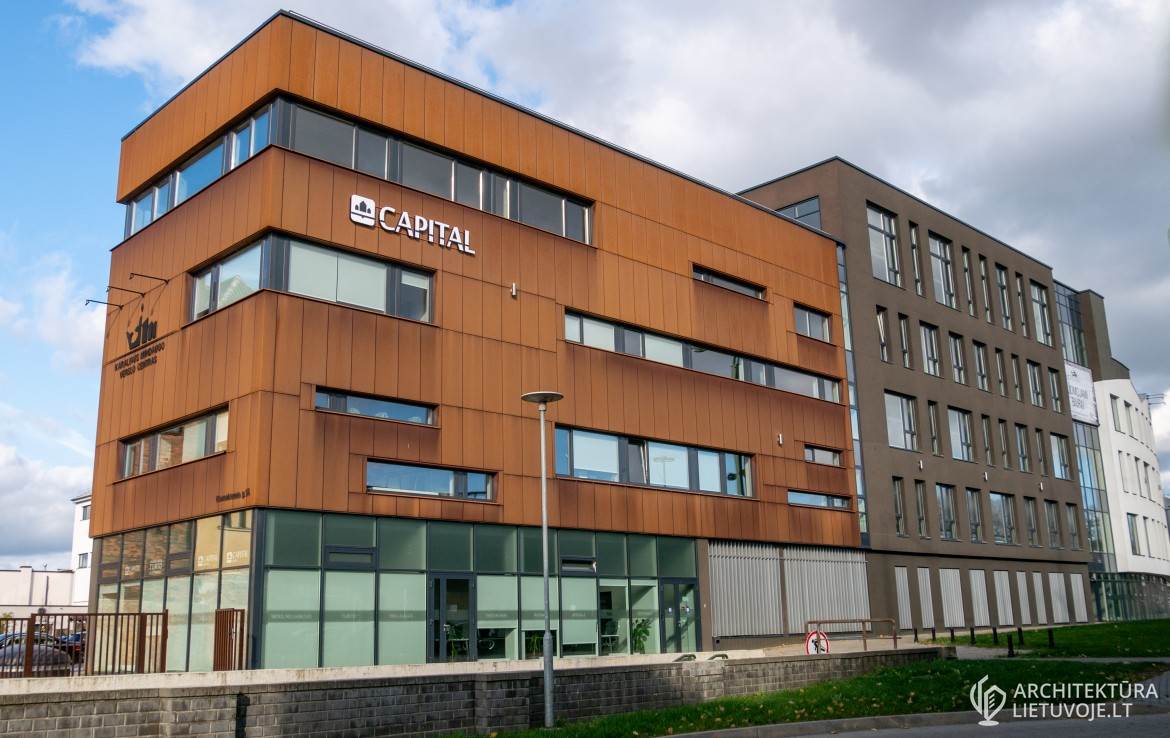 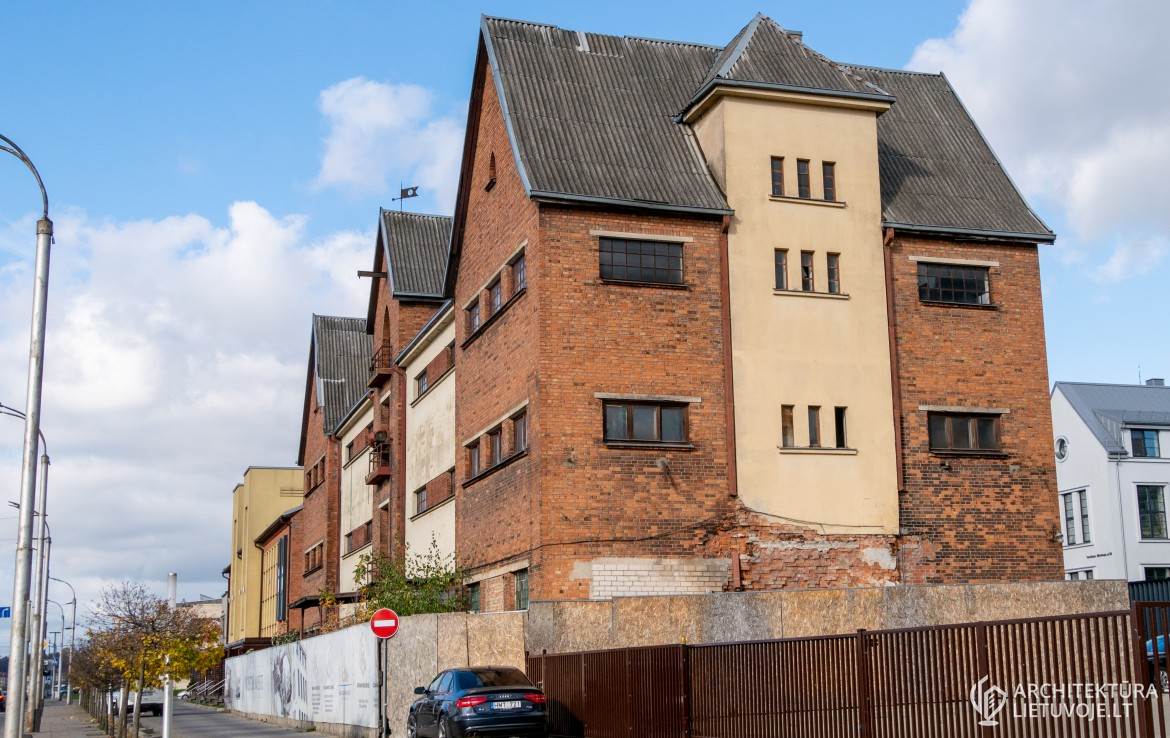 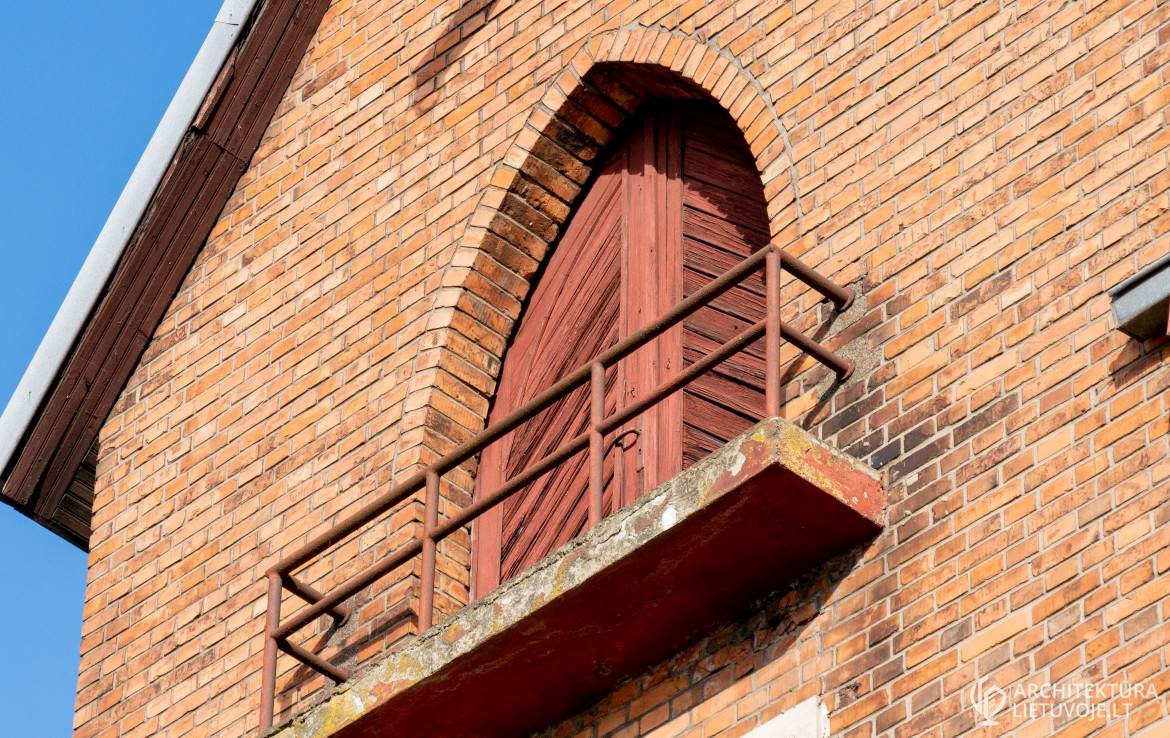 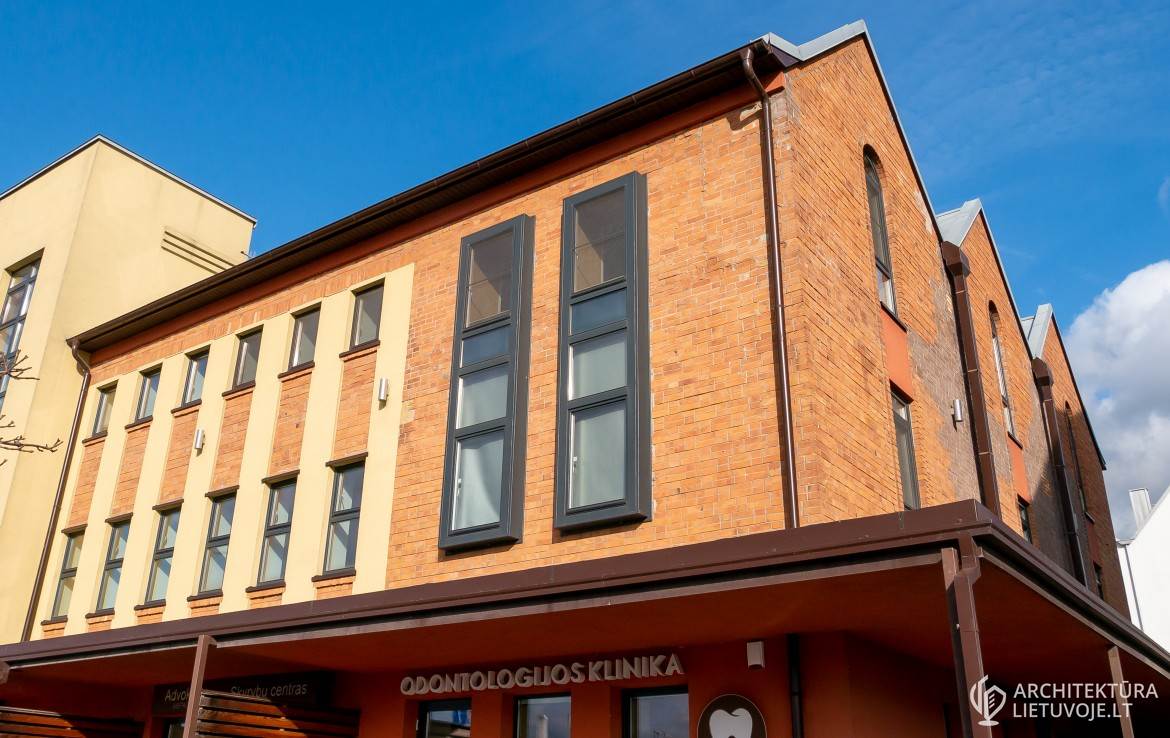 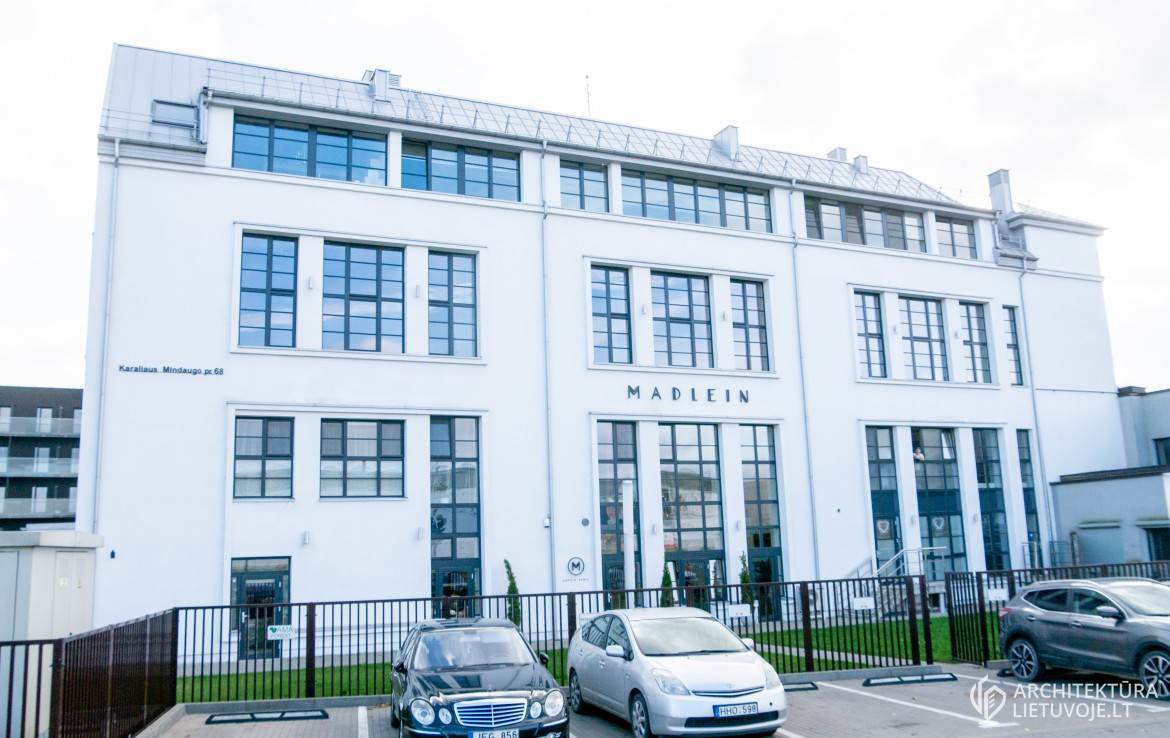 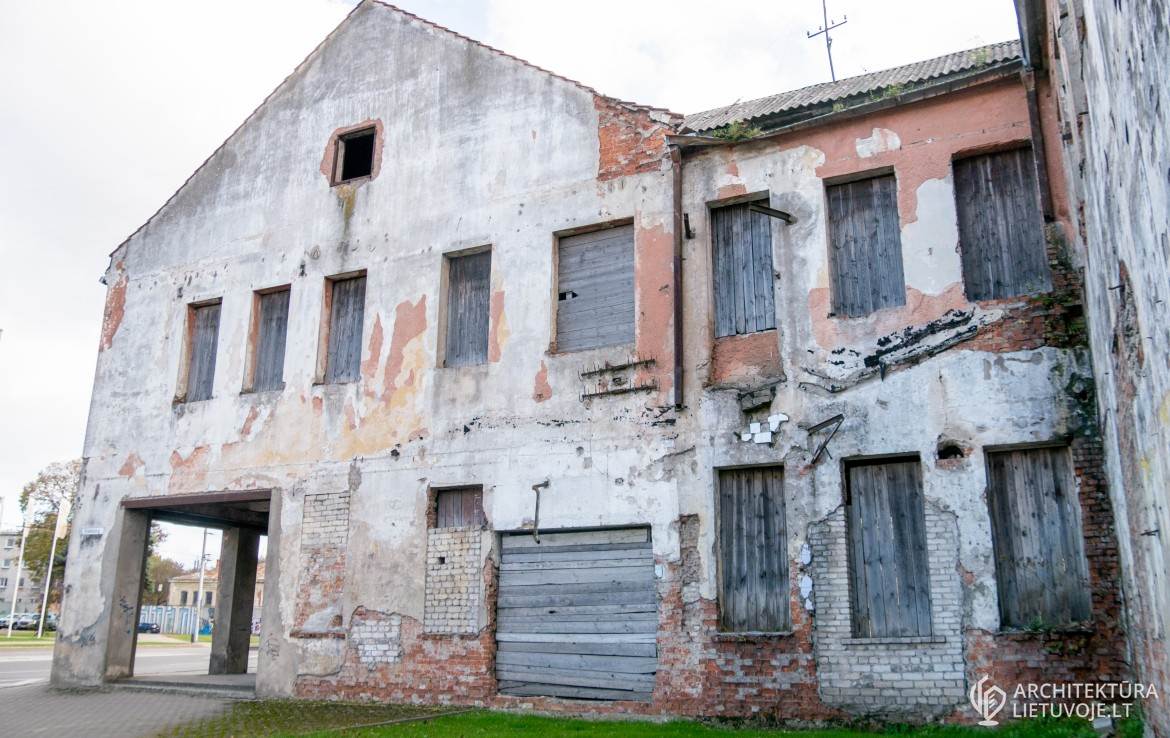 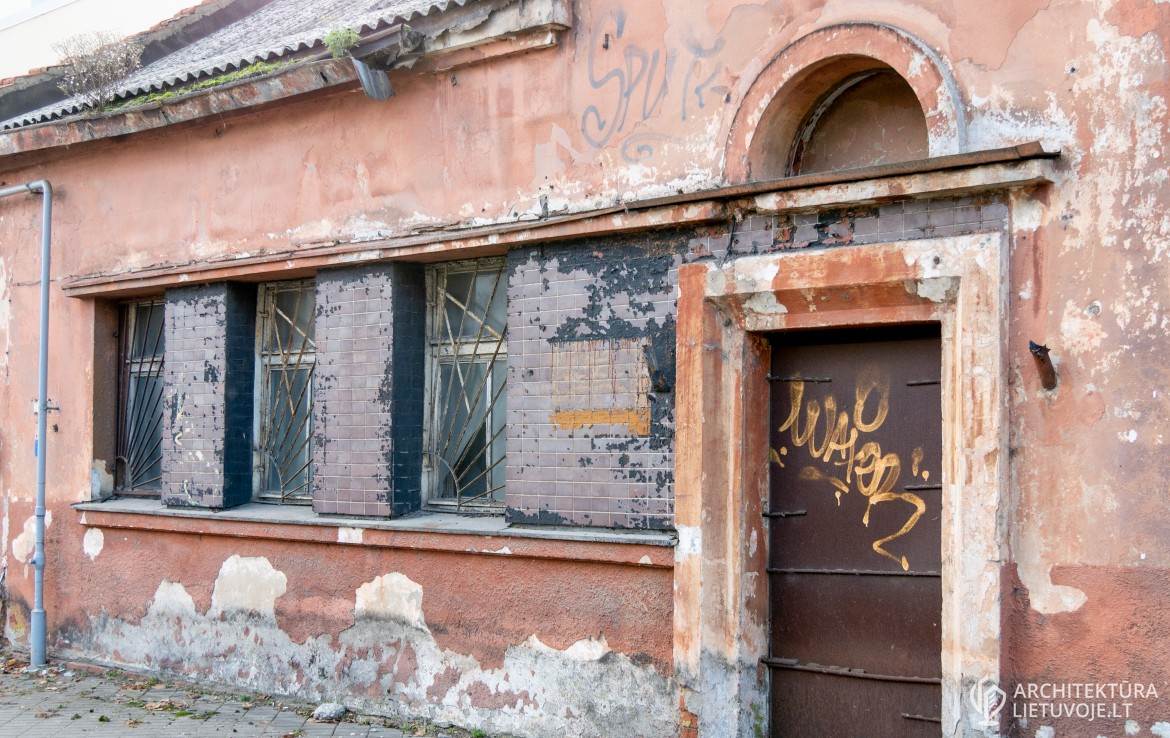 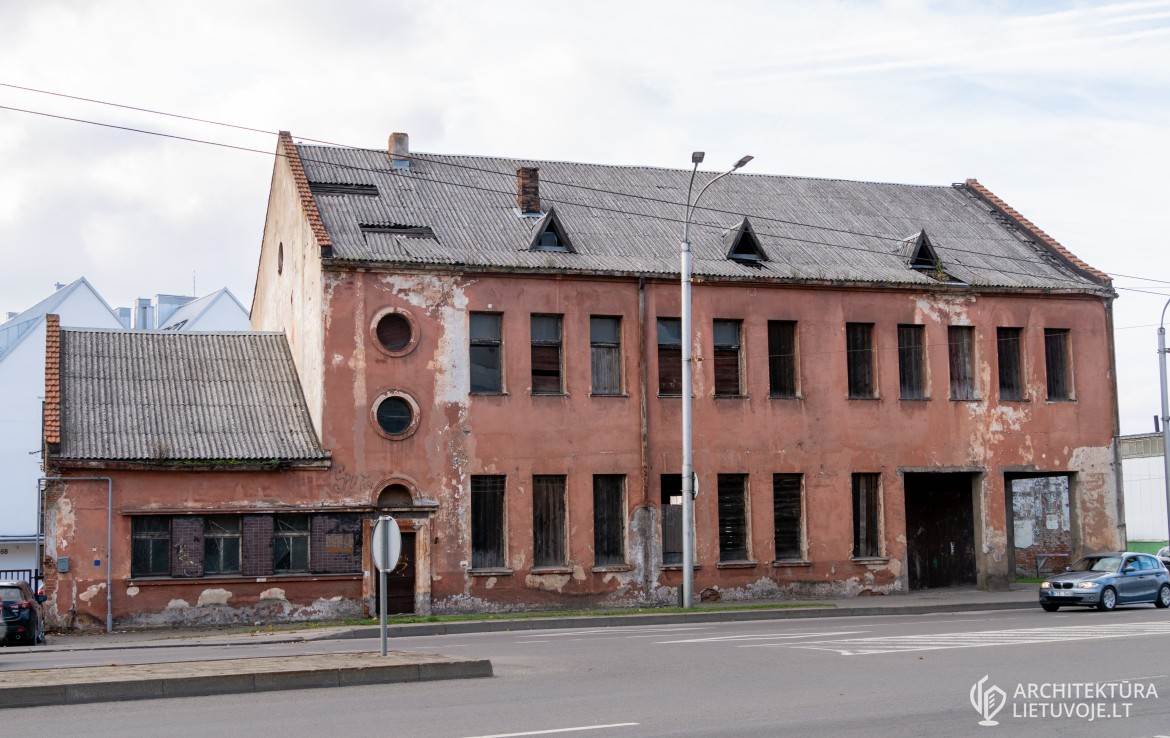 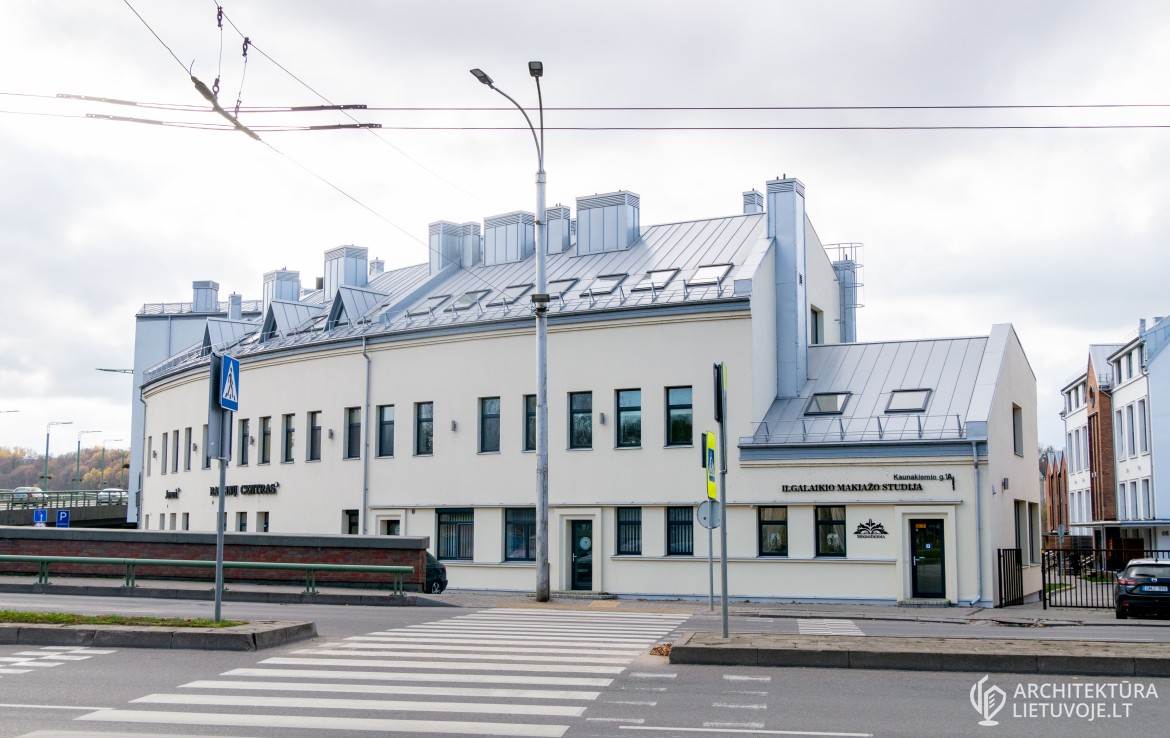 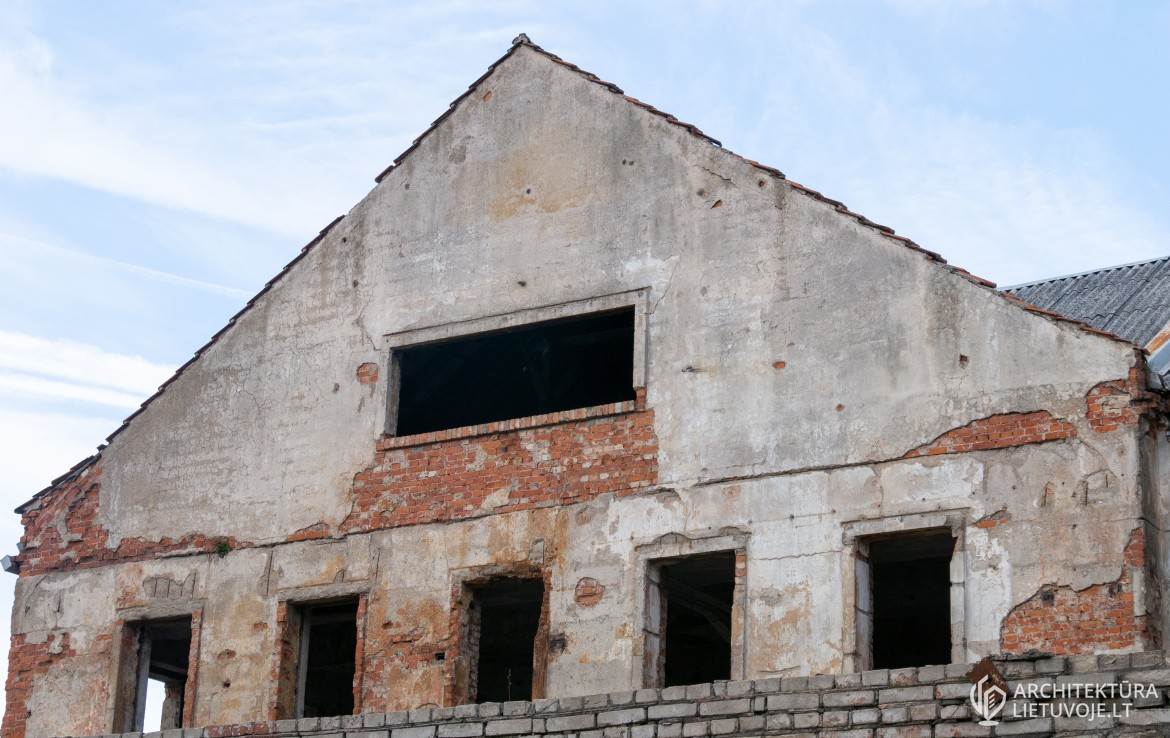 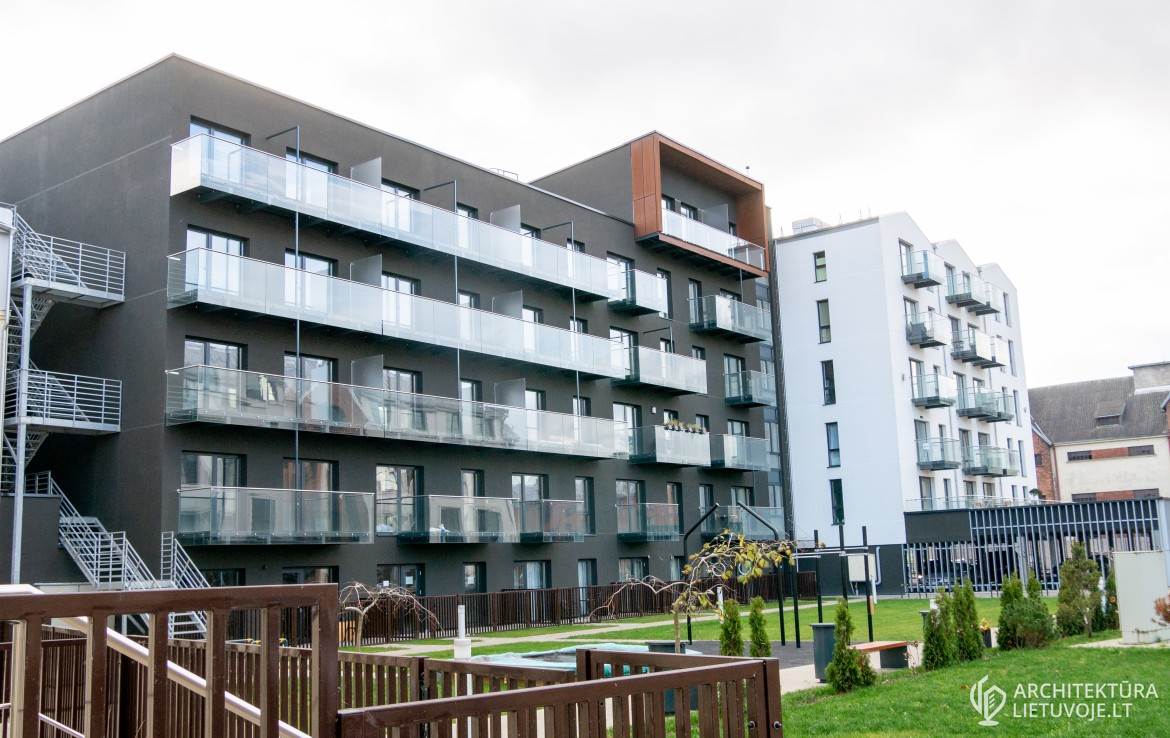 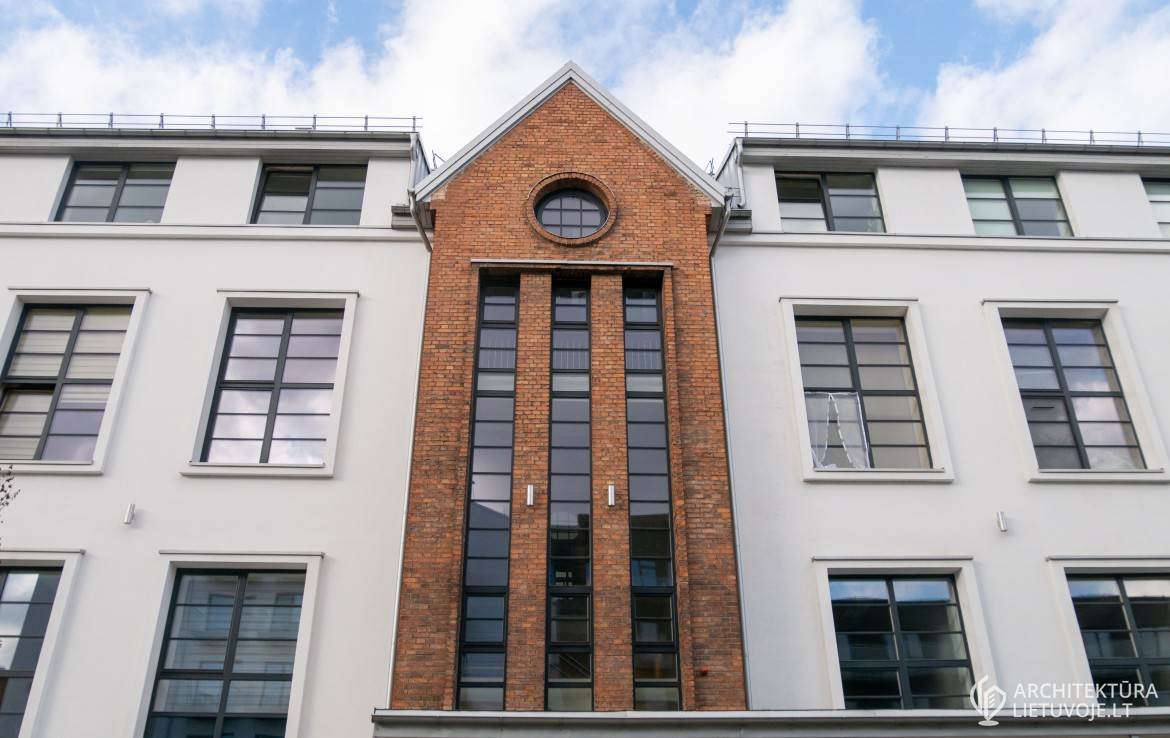 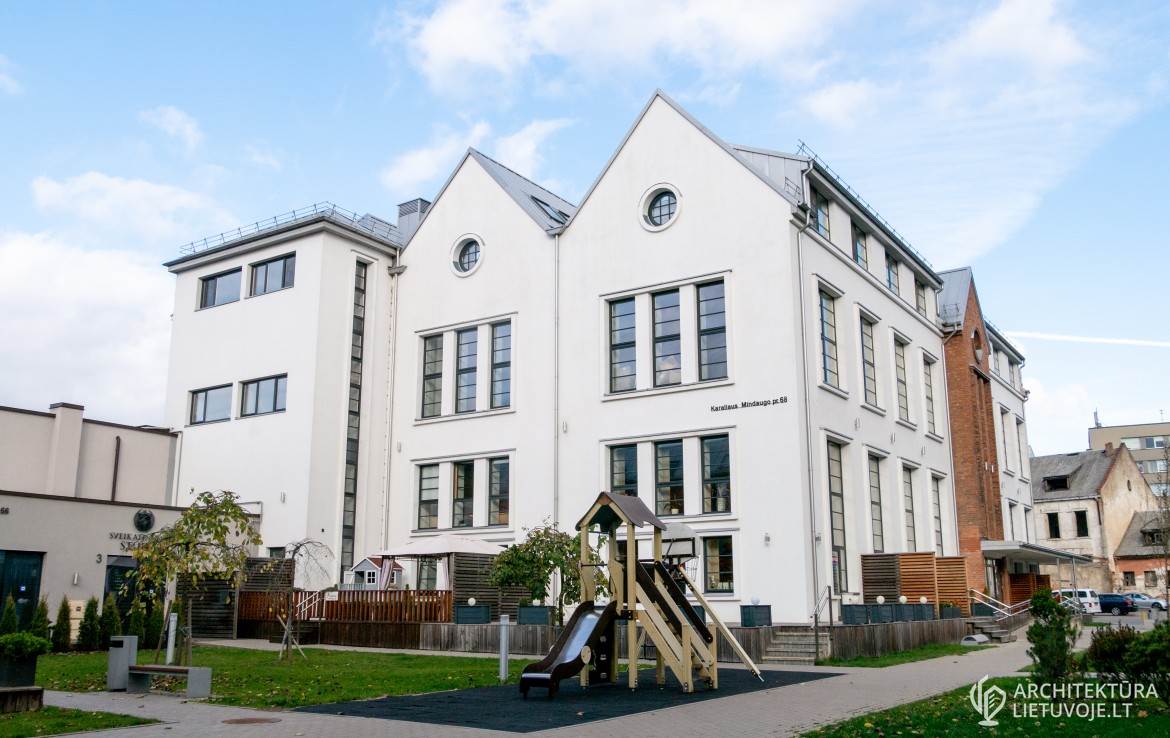