In the second half of the 19th century the Curonian Spit was nothing like it is today: the forest cleared during the seven-year war in the 17th century changed the whole landscape of the peninsula. The windswept sand, having buried the local settlements, inhibited the further development of the region. The landscape works of the Curonian Spit took place actively in the 19th century, however, the fishermen settlements still consisted of modest, wooden fishermen homesteads. Nida was no exception and when a church rose on one of the hilltops in 1887-1888, the settlement only had a single brick building – a lighthouse.

The so called Eisenach order, which came into effect in 1861 in Germany, provided guidance for the construction and architecture of the Lutheran churches. Alongside certain standards for the arrangement of the interior of the churches, the then trending spirit romanticising the middle ages resulted in requirements to build churches in “historically German” neo-Romanesque and especially neo-Gothic forms. This reflected in the small Nida church characterised by the latter expression. It was built thanks to the faith effort of the local pastor Karl Gustav Echternach: he initiated the collection of donations all over Prussia.

The church is of a rectangular plan, with a prodome slightly lower than the main one and the slightly pulled forward tower. The main façade is modest, diversified with small, rectangular window openings on the sides. On the top of the portal, located at the bottom part of a three-section tower, a round window is integrated – typical accent of that period, replicating itself in the middle section of the tower a well. The lateral is also diversified by three Gothic pointed arch niches, with a window in the middle niche. The most decorative parts of the façade – the top cornice and pediment diversified with brick pattern, with niches, windows and pinnacles giving the fine building the impression of vigour. The lateral façades are completed by a rhythm, placing two windows between the buttresses. The portals of the former side entrances are decorative as well.

As it is typical of the Lutheran churches, the presbytery is lower than the nave and is ended with a straight wall. On the other hand, the symmetrical church plan is disrupted by the sacristy protruding from the northern side of the presbytery. In the presbytery covered in a cross vault – three pointed arch windows, which form the main highlight of the rear façade from the exterior. The wooden roof structures, the second floor gallery, the columns    supporting it and the organ choir (set up in its current form during the late Soviet period) forms a functionally decorative, but modest interior of the church typical of that region. 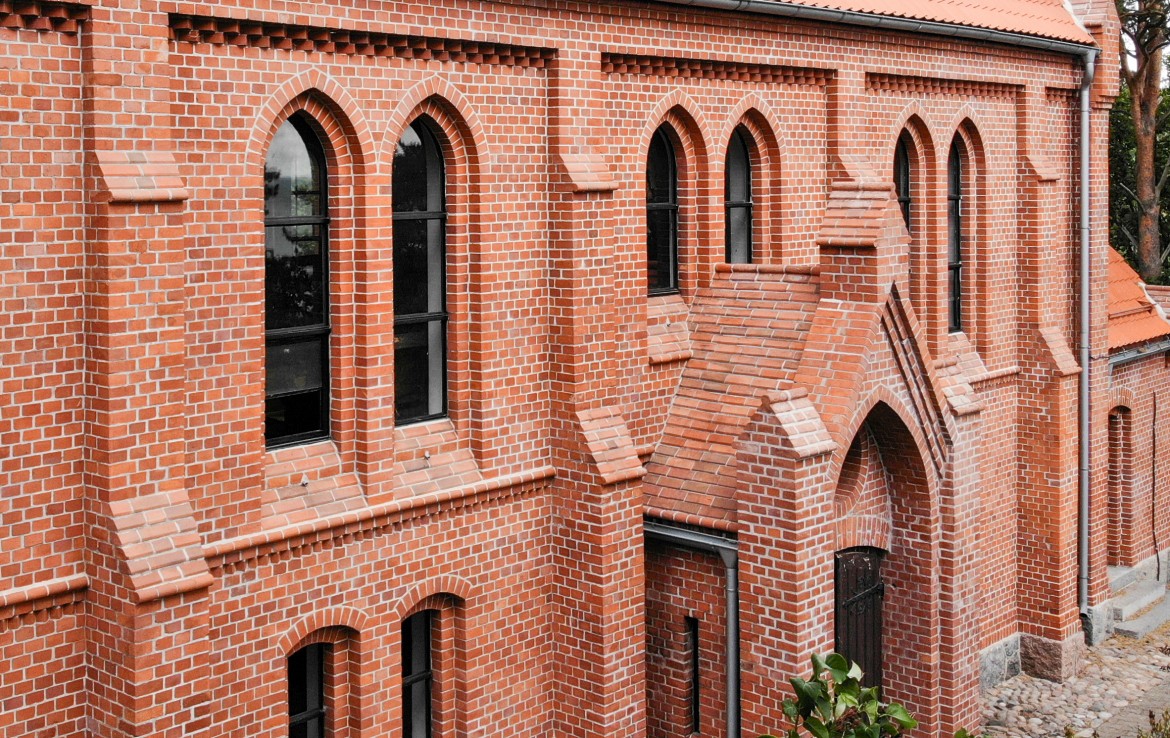 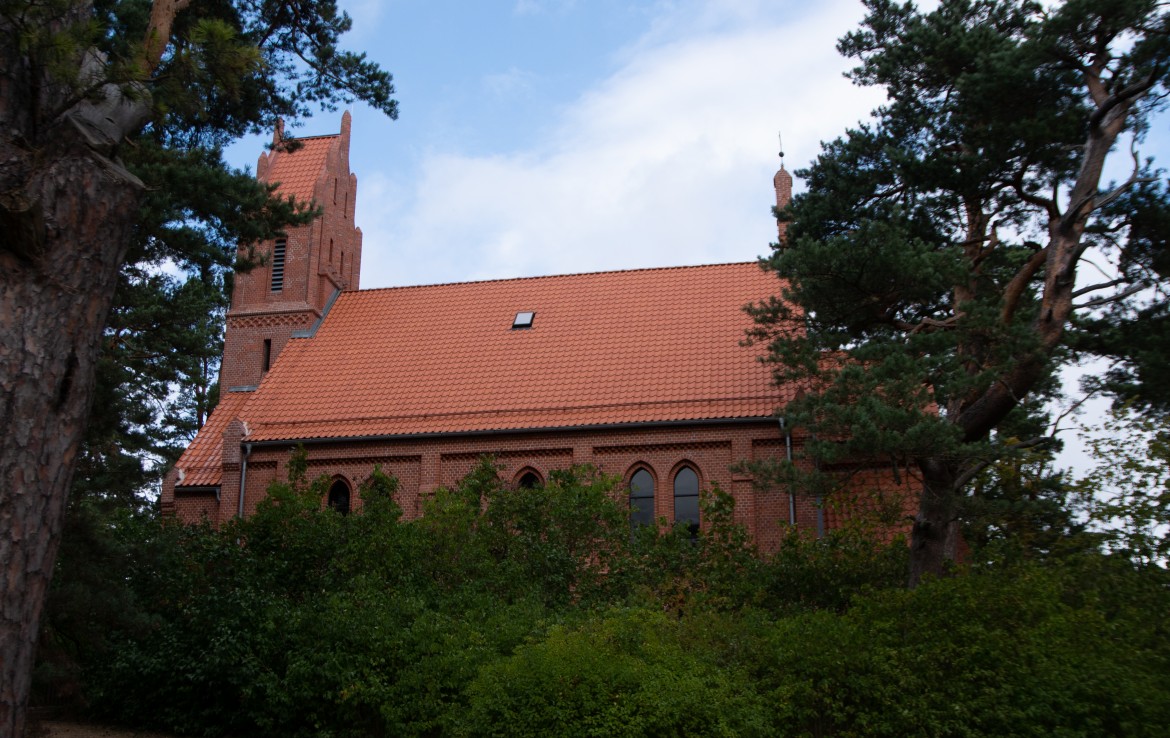 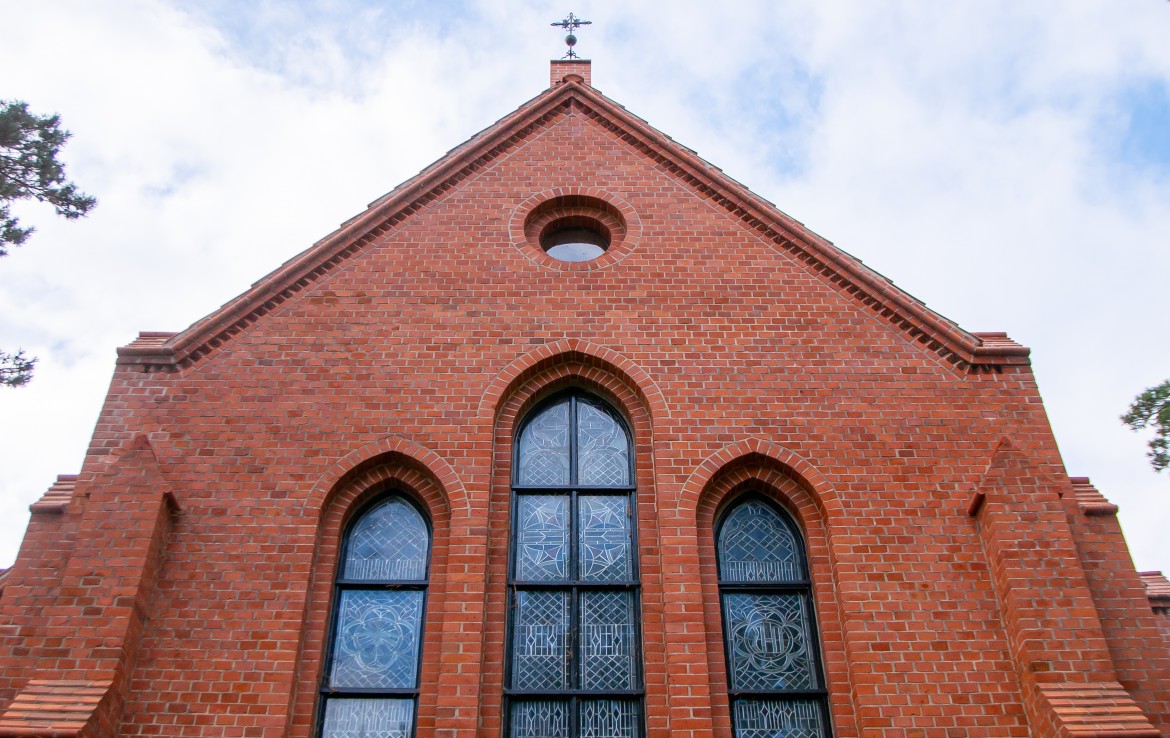 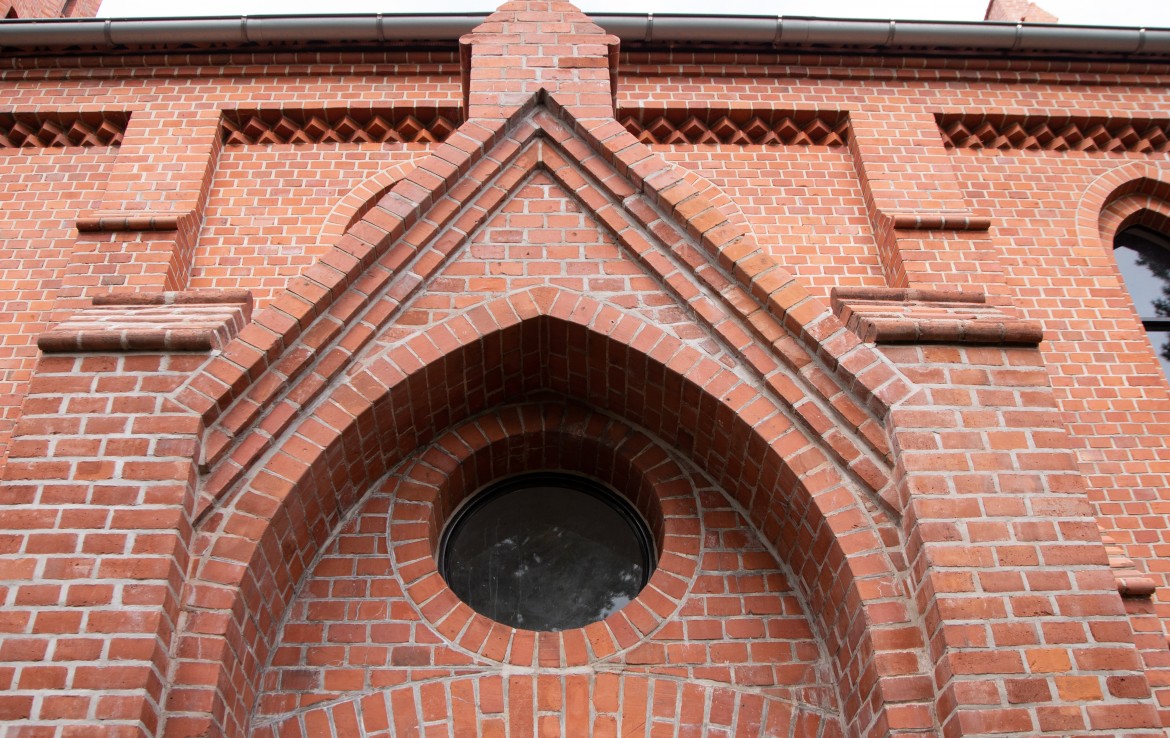 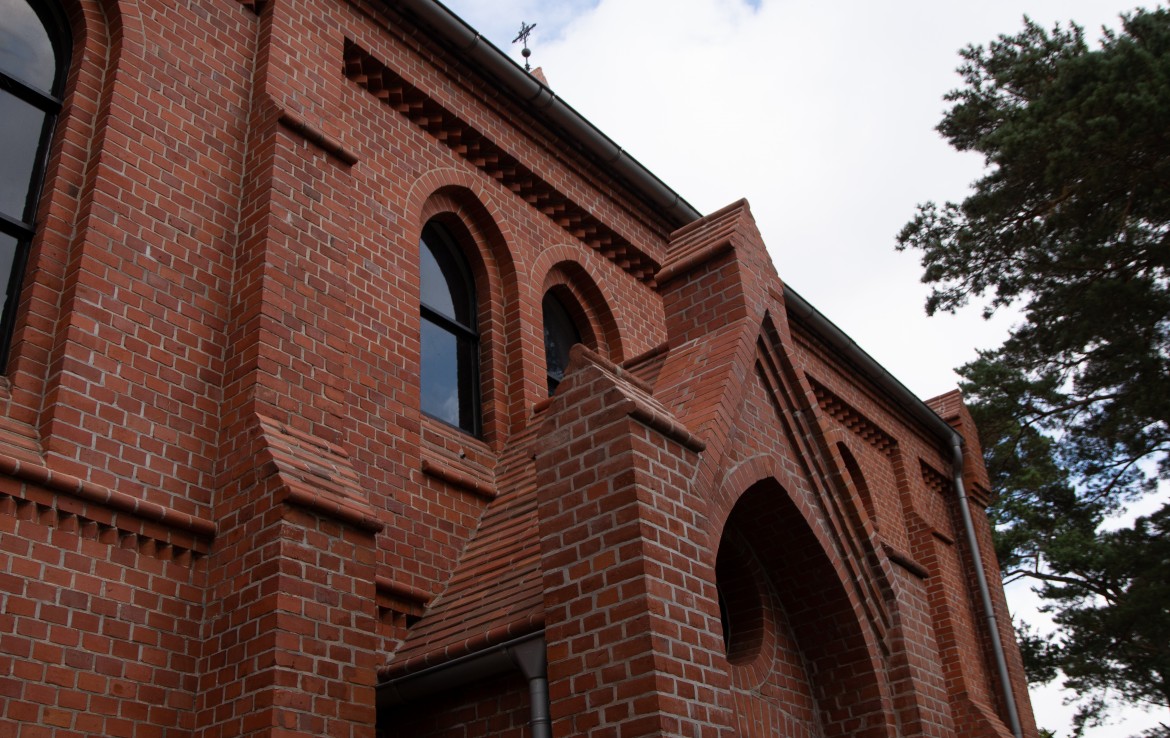 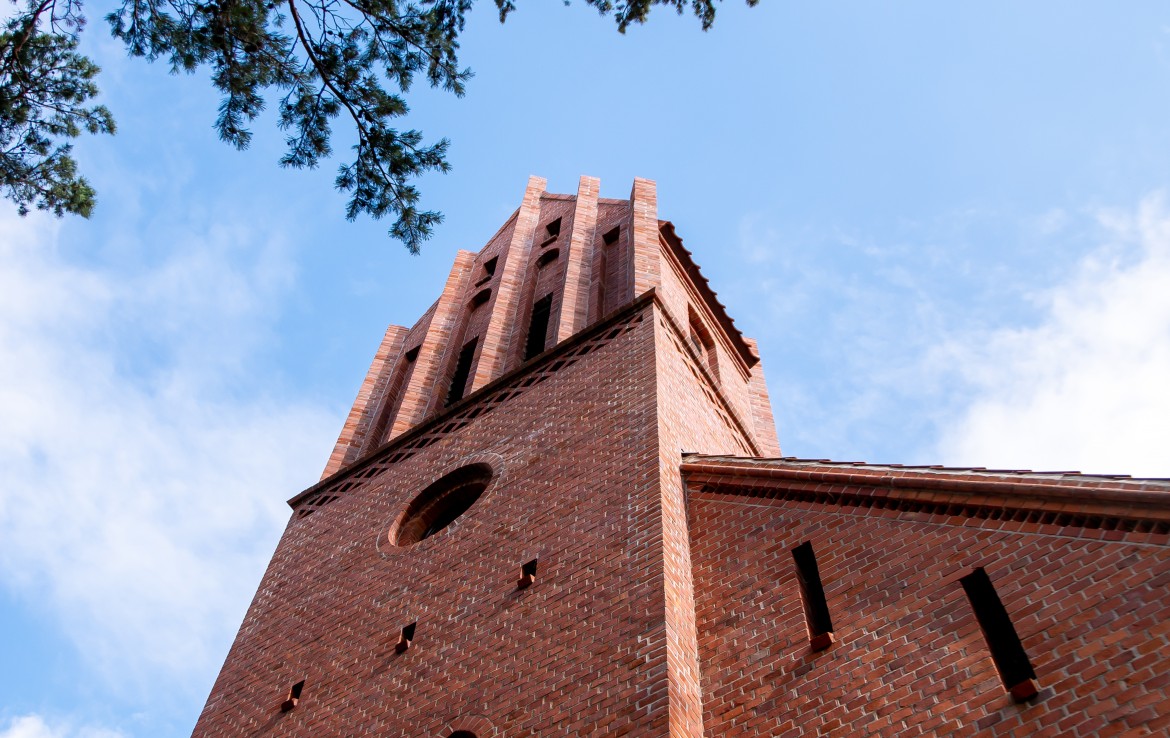 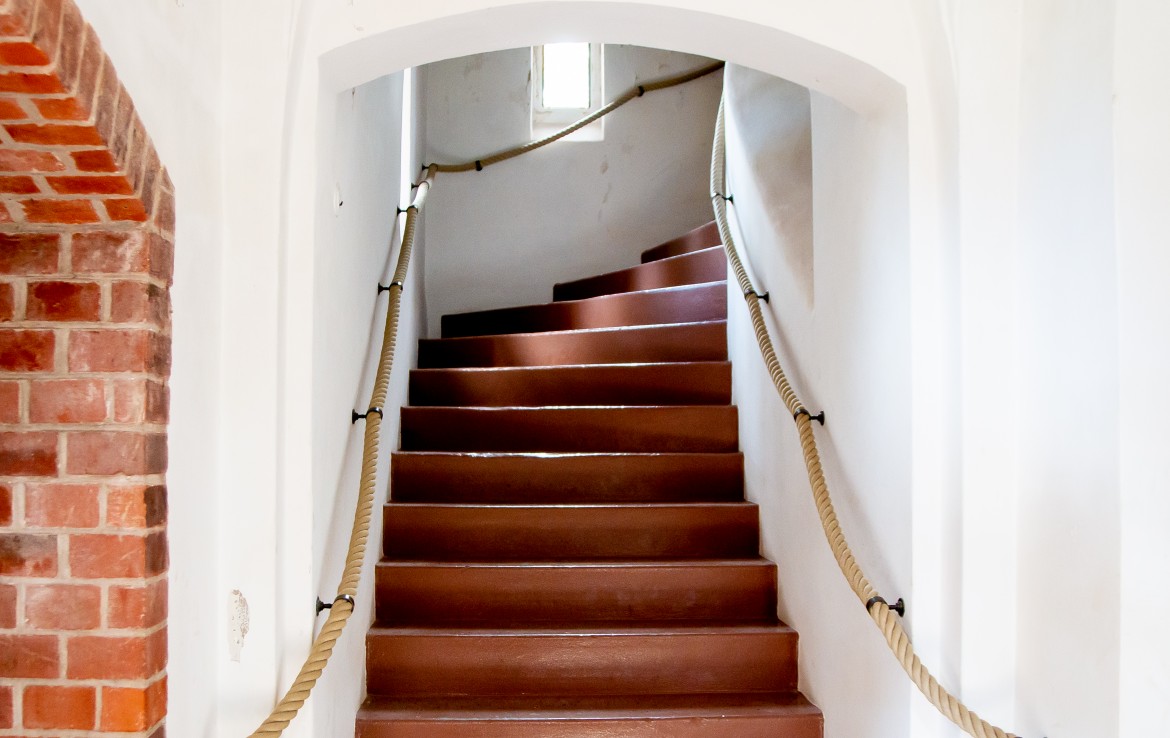 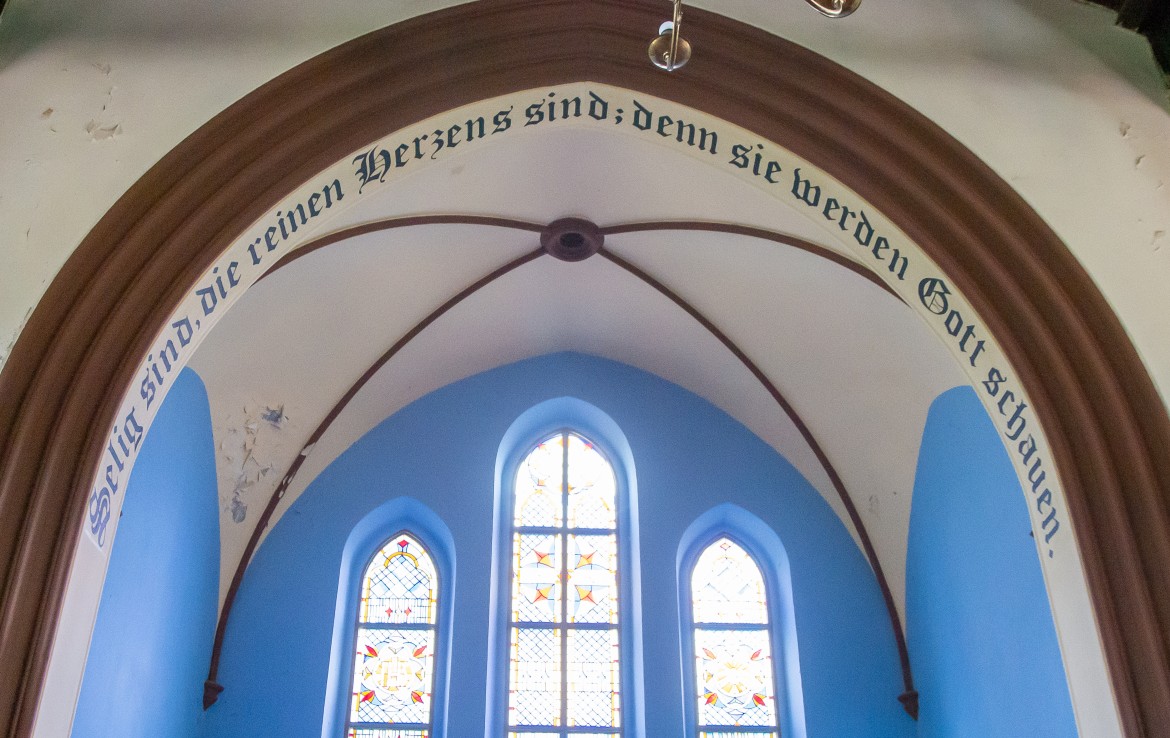 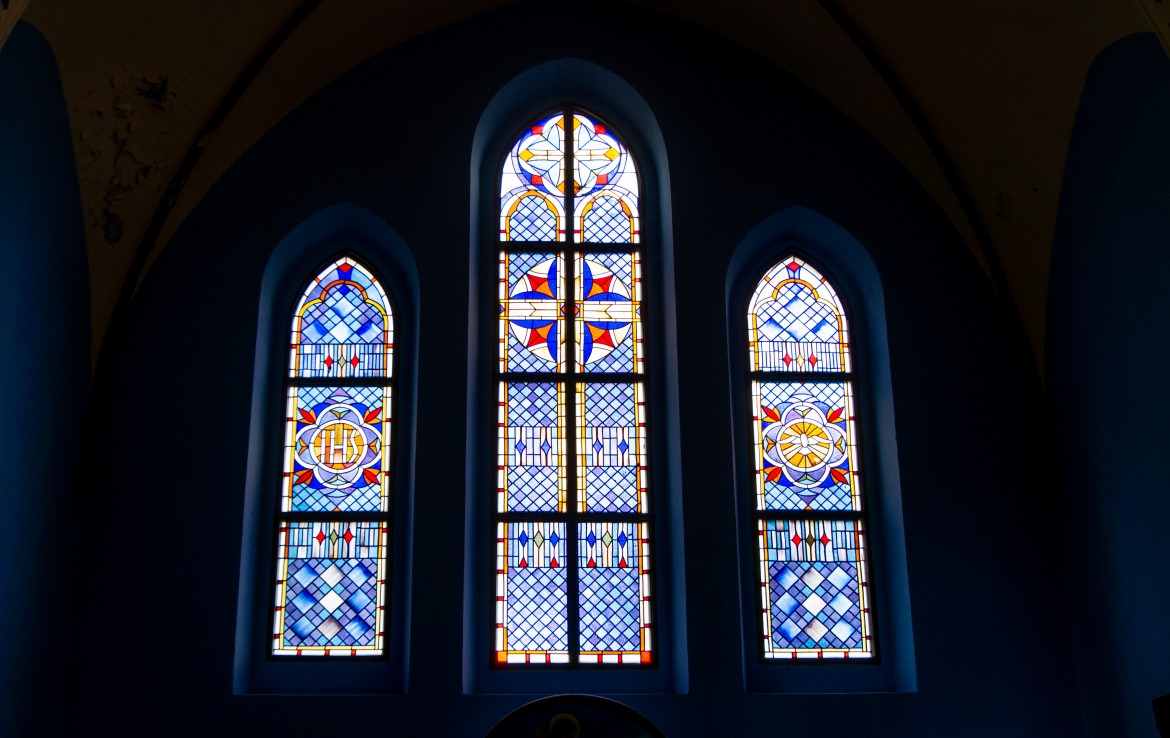 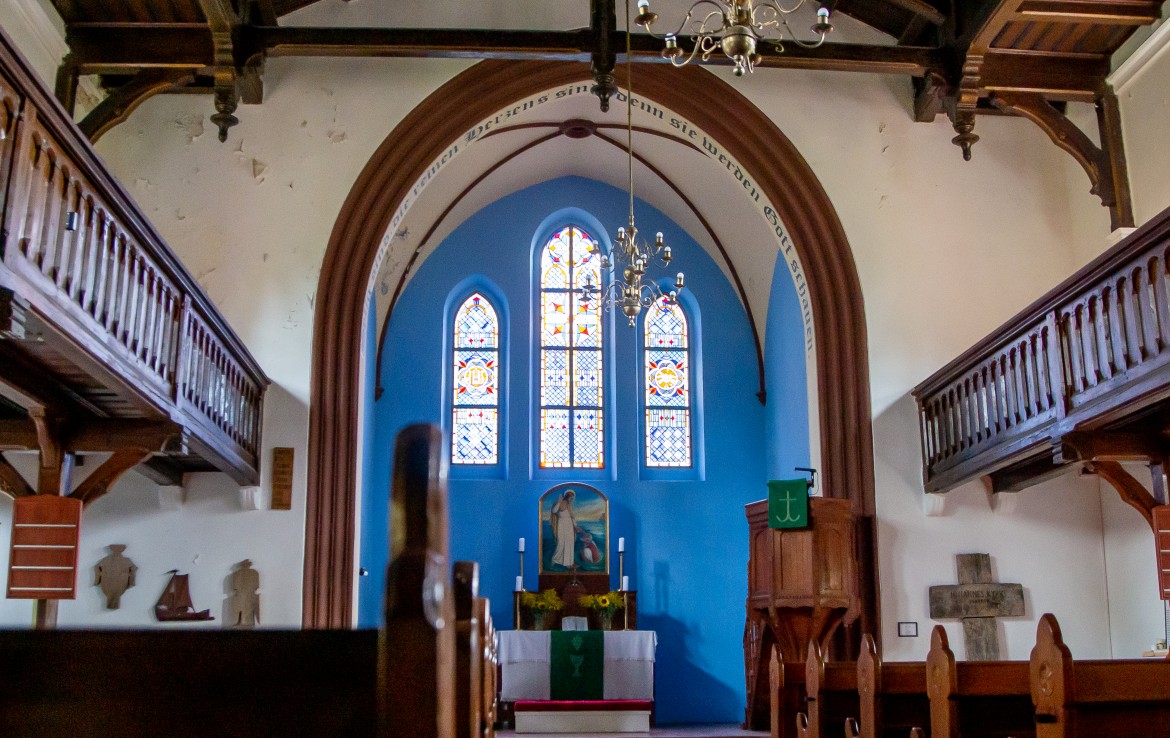 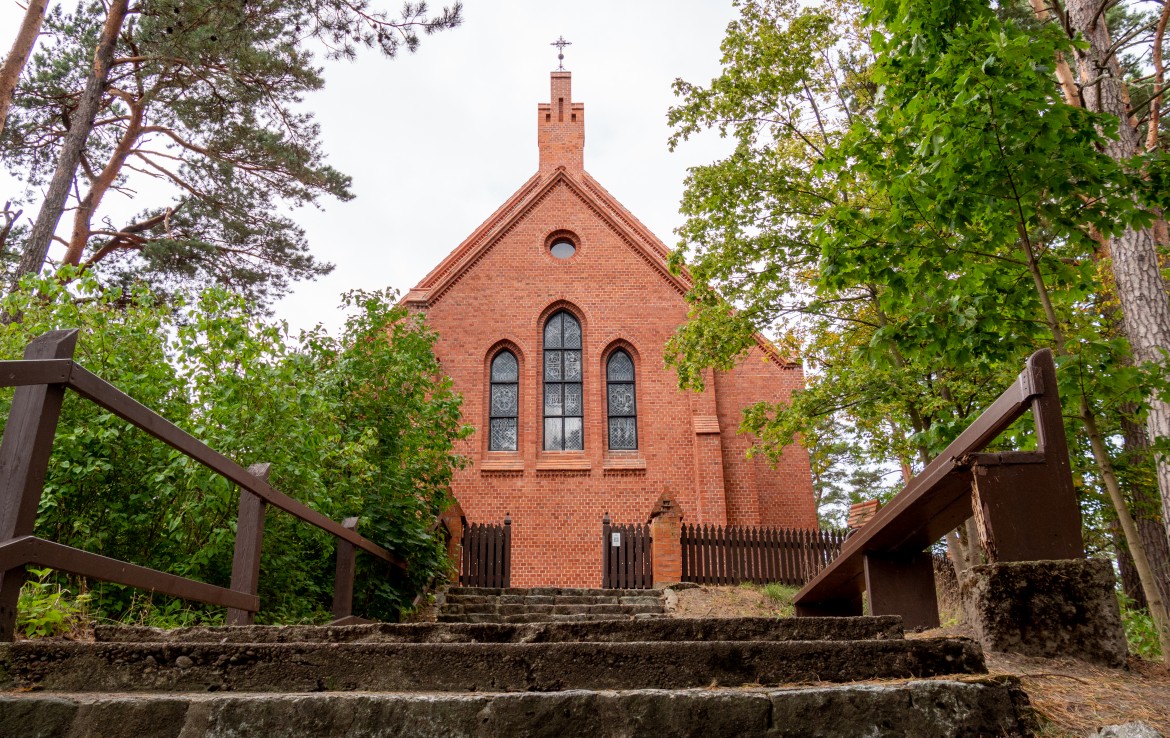 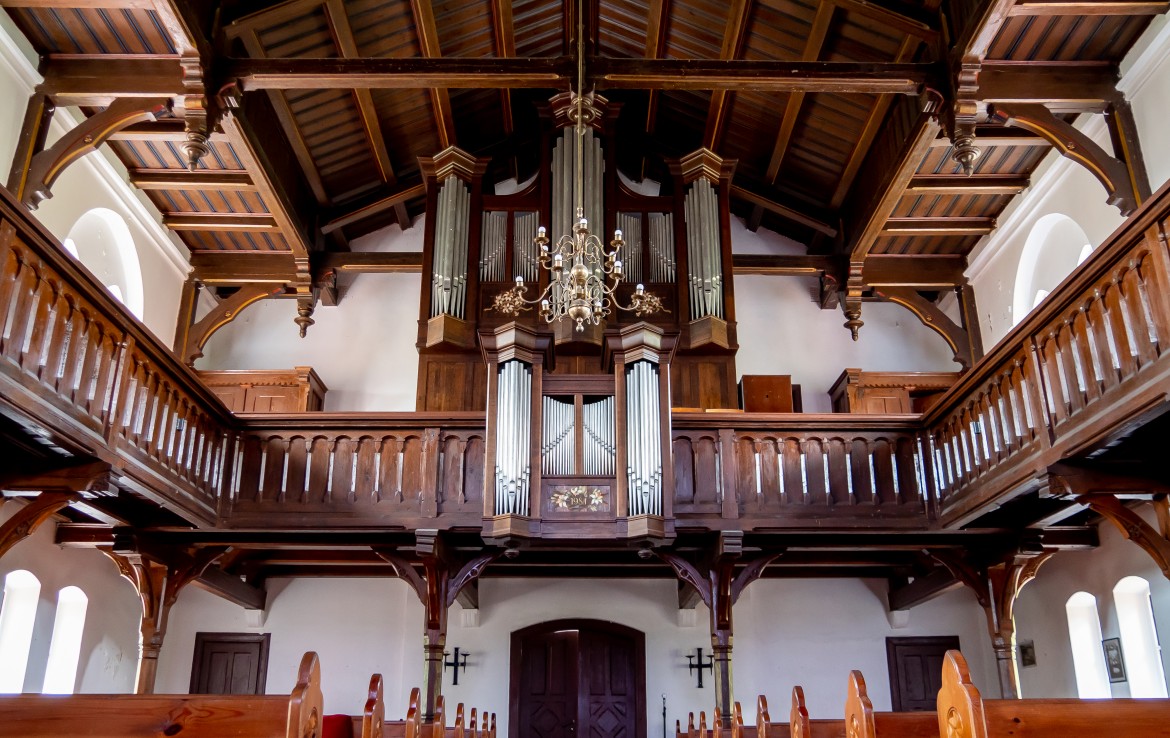 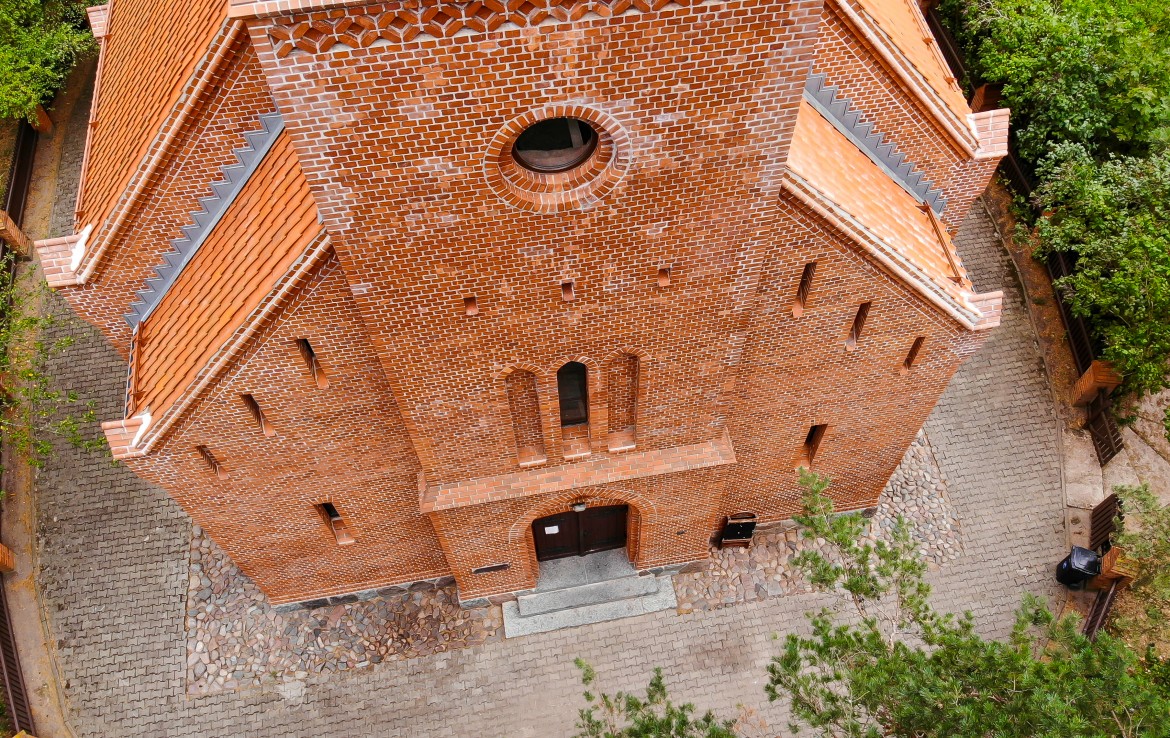 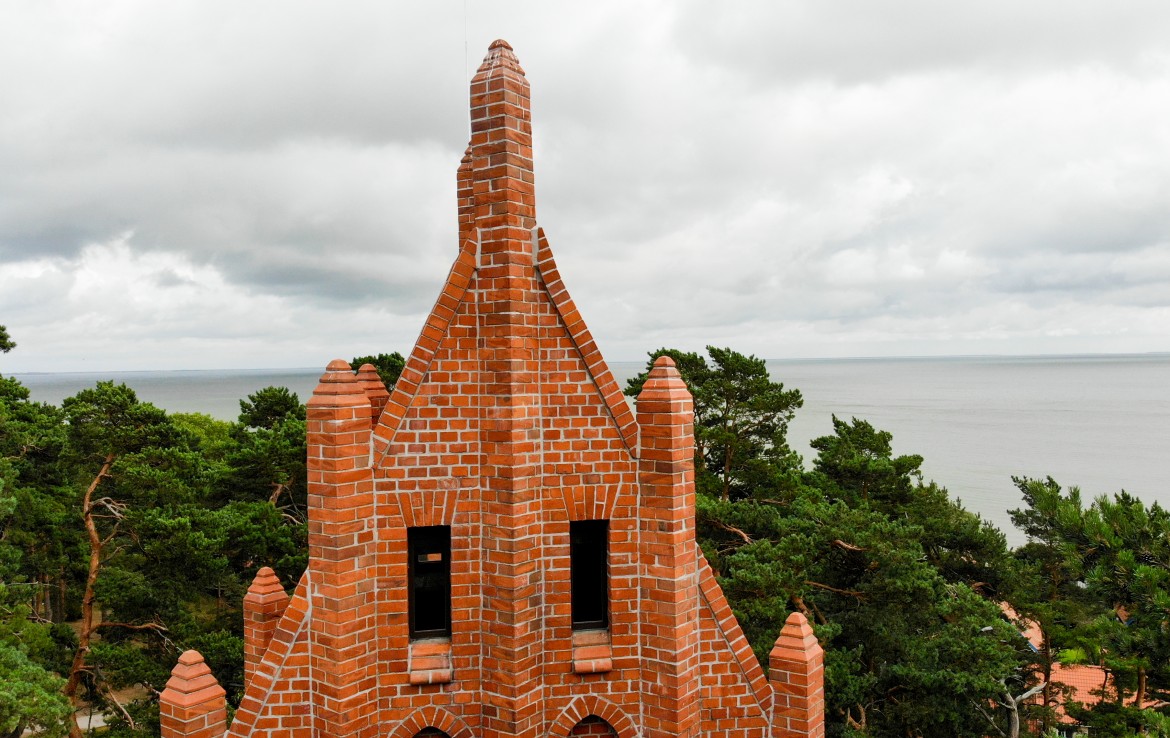 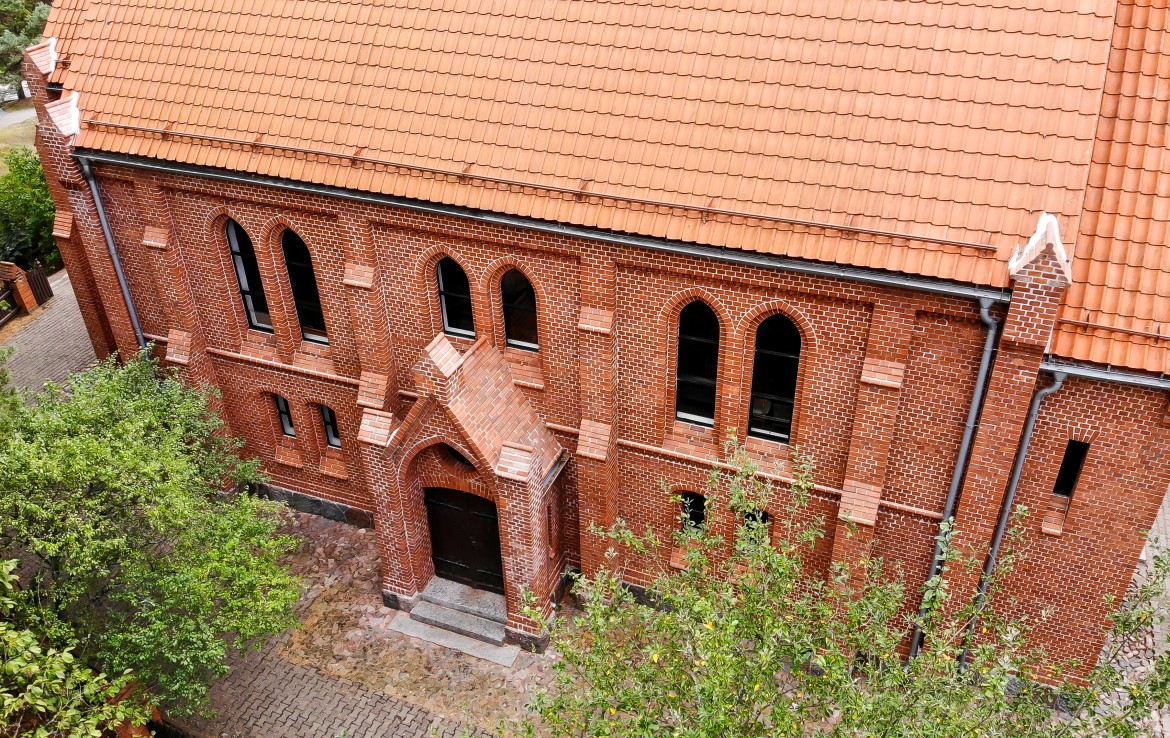 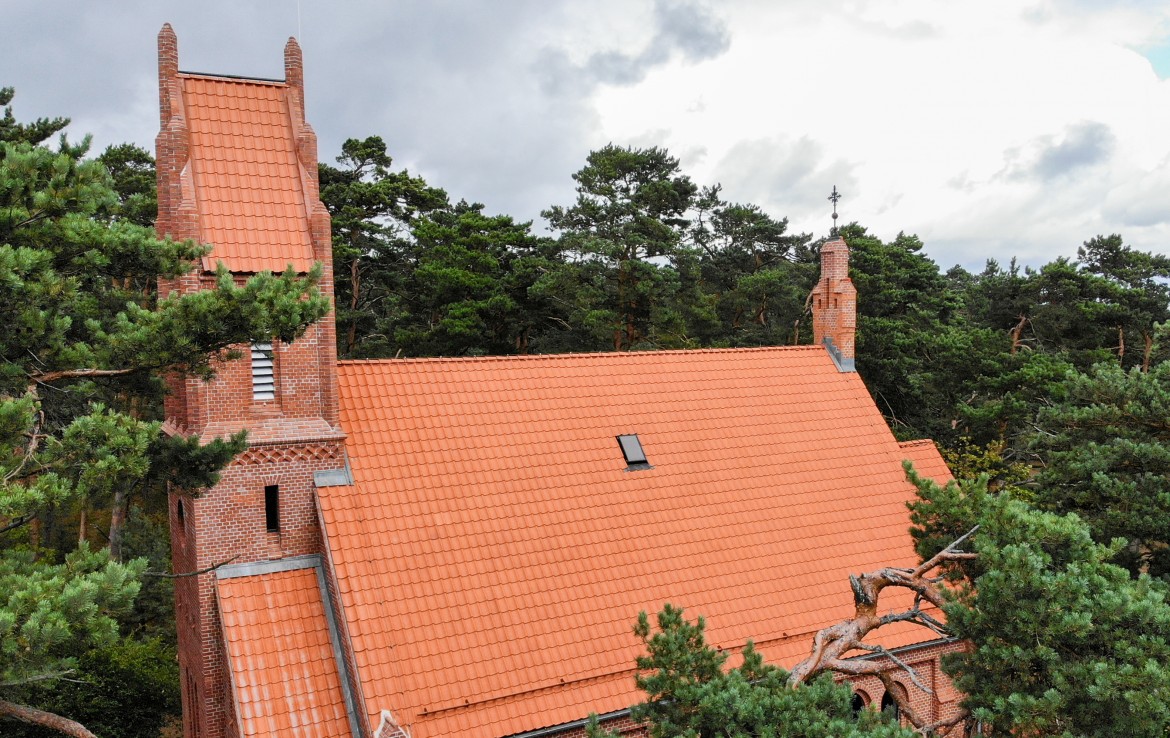