Near Druskininkai, on the high bank of the Nemunas river, a Baroque ensemble stands, which perhaps is a southernmost Baroque ensemble within the boundaries of the present Lithuania and is one of the most impressive examples of the style in this region. It is the complex of Liškiava Church of the Holy Trinity and Dominican Monastery, decorating the vicinity for almost 300 years. The monks of the Order built the church on the land plot, obtained as a present from the local Manor owner Vladislavas Kosyla between 1704 and 1741, while the new Monastery House was built later.

Above the narrow and tall church, a massive dome rises – the church is an example of the so-called centrally set up domed church, which in Lithuania became popular particularly in the early18th century, in monasterial ensembles namely. The dome rises above the central eight-walled space, the narthex and intersection between axes of the presbytery and the transept. In the expression of facades of the church, straight tectonic forms dominate – the pilasters, set up in the intersections of walls, hold the wide, still ordinary enough, entablature, above which in the front and transept facades, triangular pediments are integrated. On the front facade, the pilasters are doubled – from the sides two small decorative towers rise – both their tiers on the top end with the small cornices curved according to the shape of niches. The presbytery part, ended with the rounded apse, corresponds to the heights of the main church volume and is quite longer than the parts of the narthex and transept.

The inner division of the walls slightly reiterate the external one – the main space is surrounded by ordinary pilasters, ended with the profiled entablature, which surrounds it. Having taken a look upwards, one can see the frescoes of Baroque period and of the same time, which are integrated on the inside walls of the drum and in the dome, and, most likely, were created by the artists who came from Vilnius. Execution of the seven altars of the church and the pulpit stands out – this is an example of rococo. One sees here the main features of this late Baroque manifestation – the accentuated angles, richly curved and broken, and a complicated, strongly expressed decorativeness. The Monastery House, adjoined to the church, by its simple forms reflects the tendencies prevailing. The facades are divided by the verticals of the pilasters, slightly reminiscent of those used in the church, while the garret is surrounded by a quite massive cornice band – a particularly characteristic of the Baroque monastery houses is an impressive two-stage  roof. 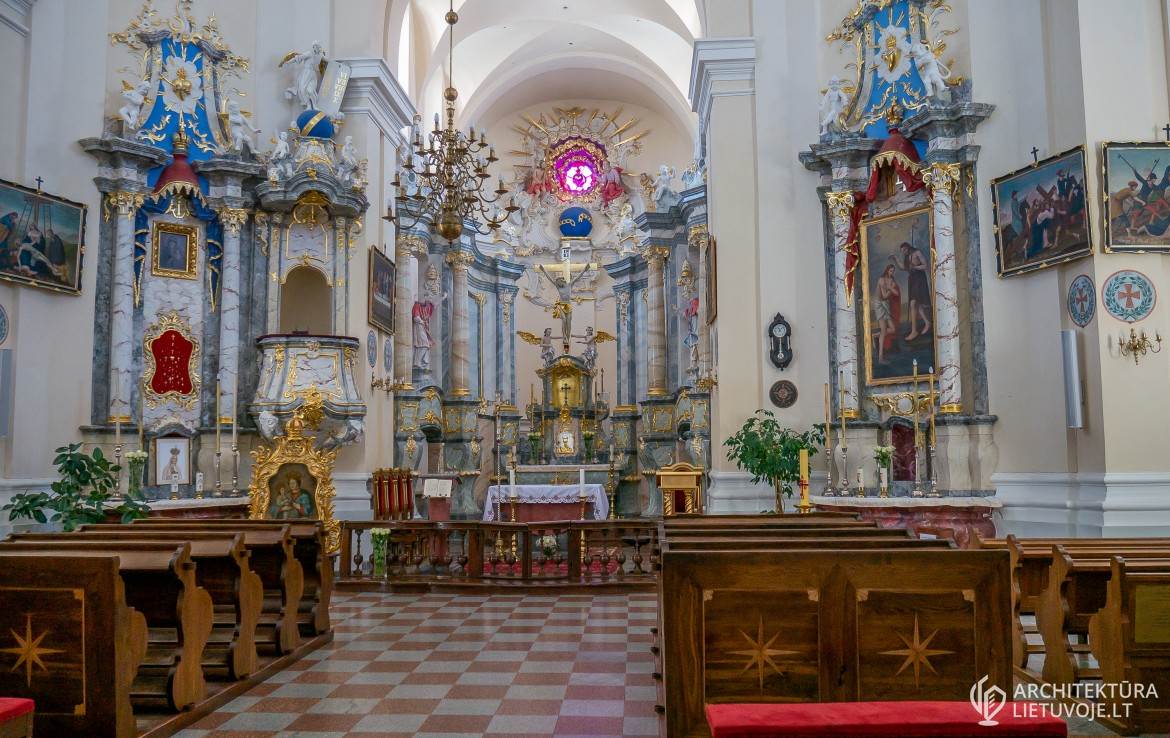 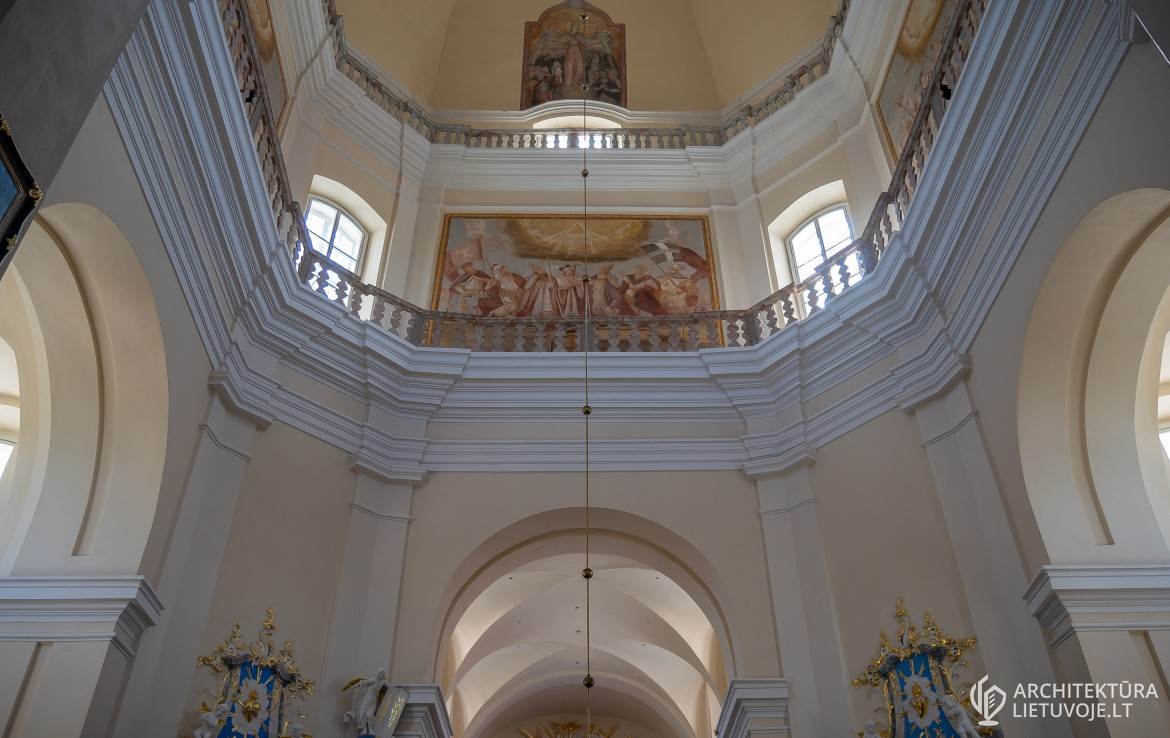 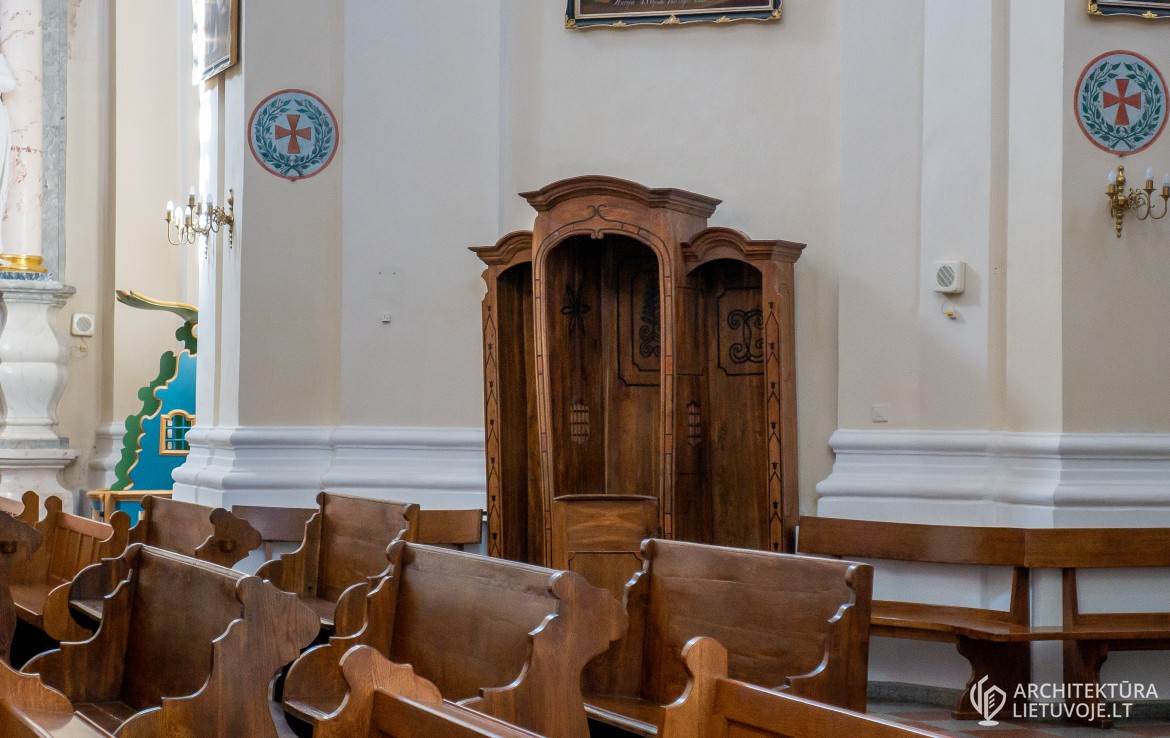 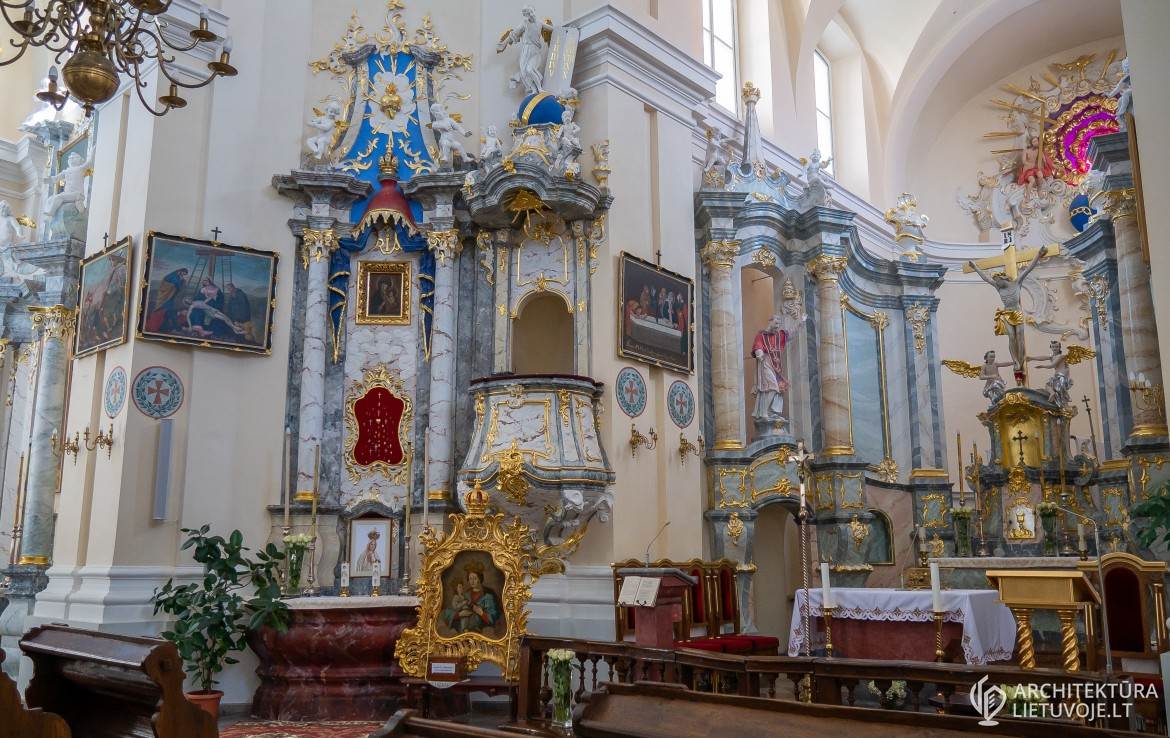 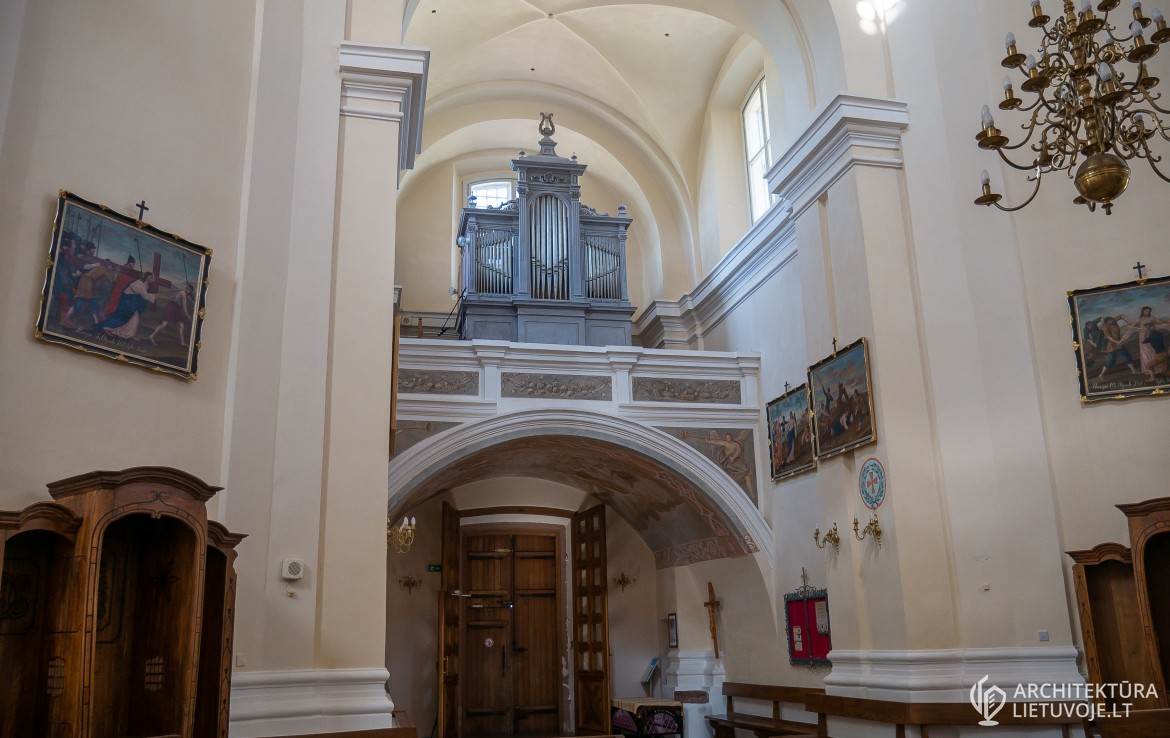 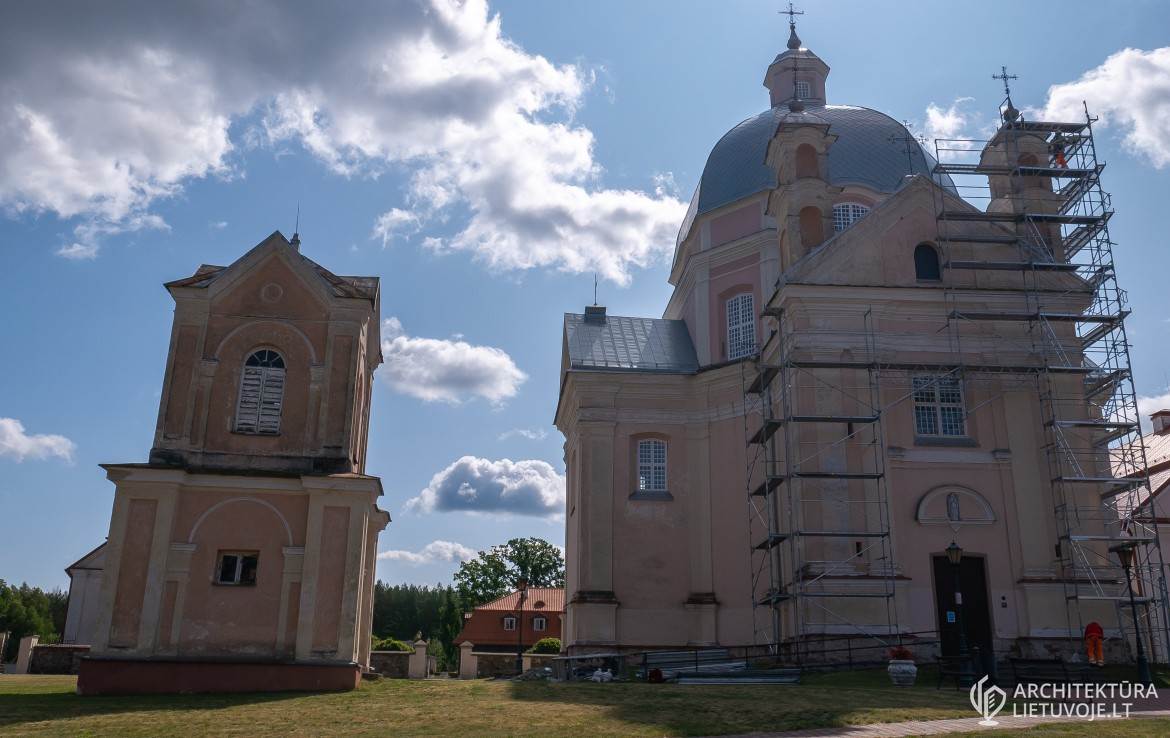 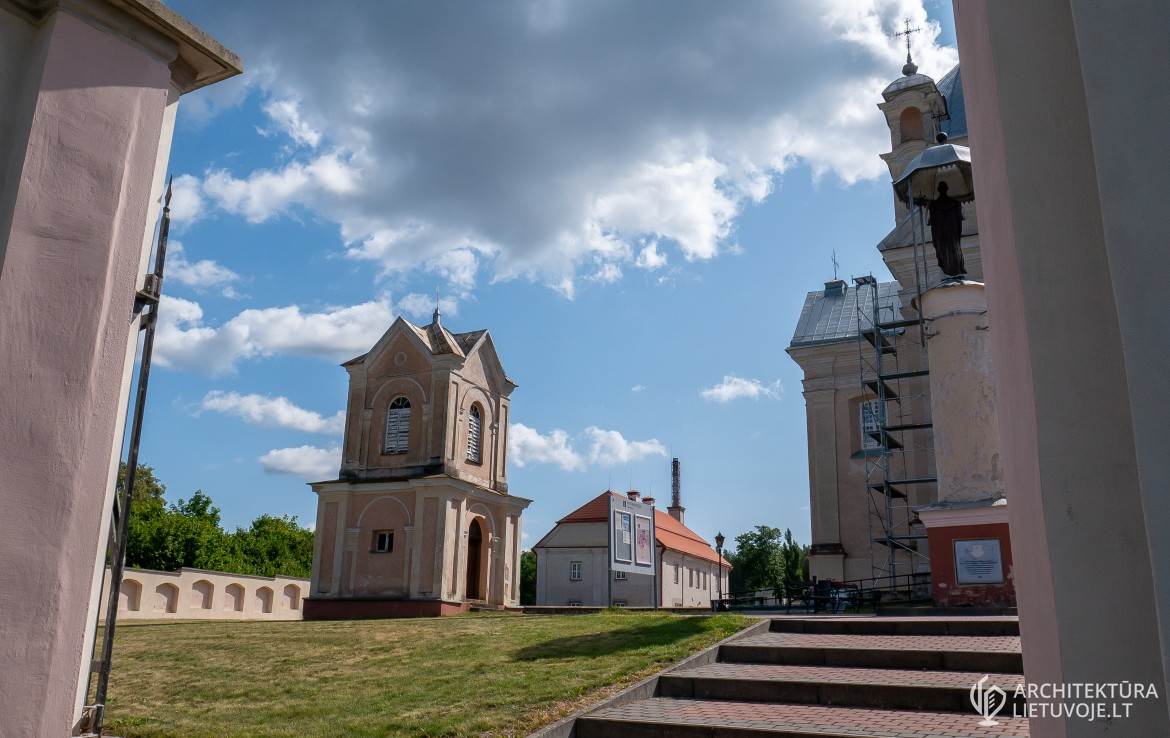 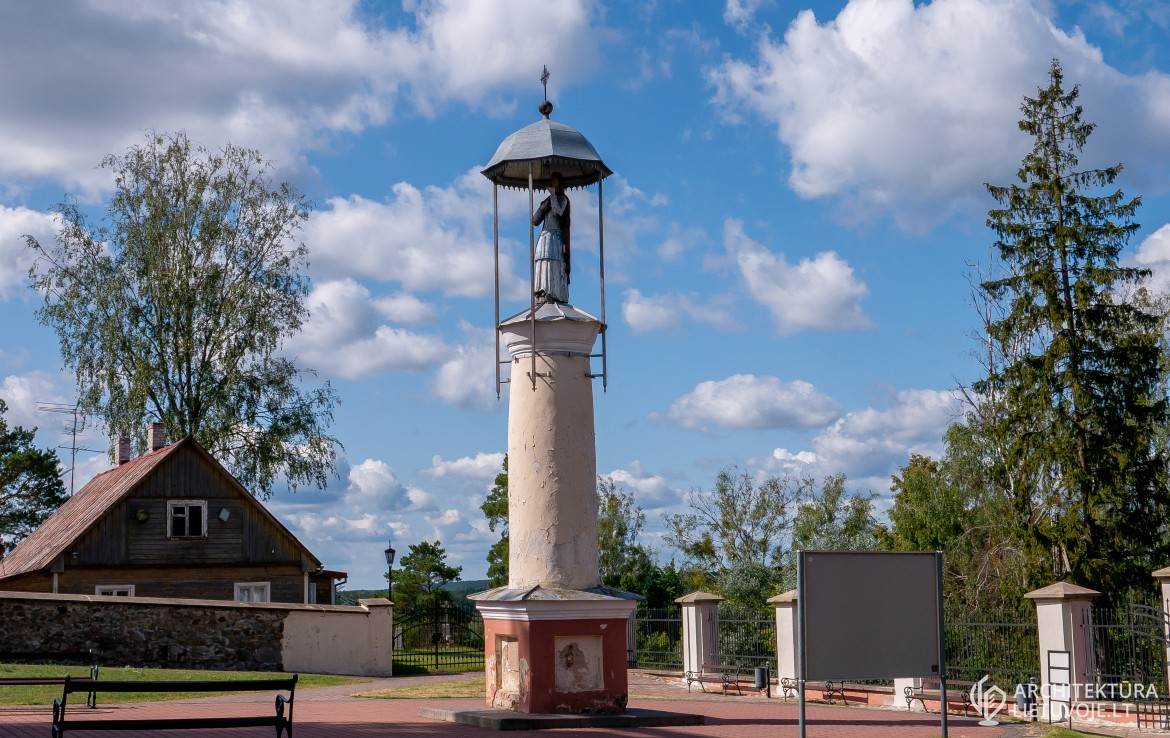 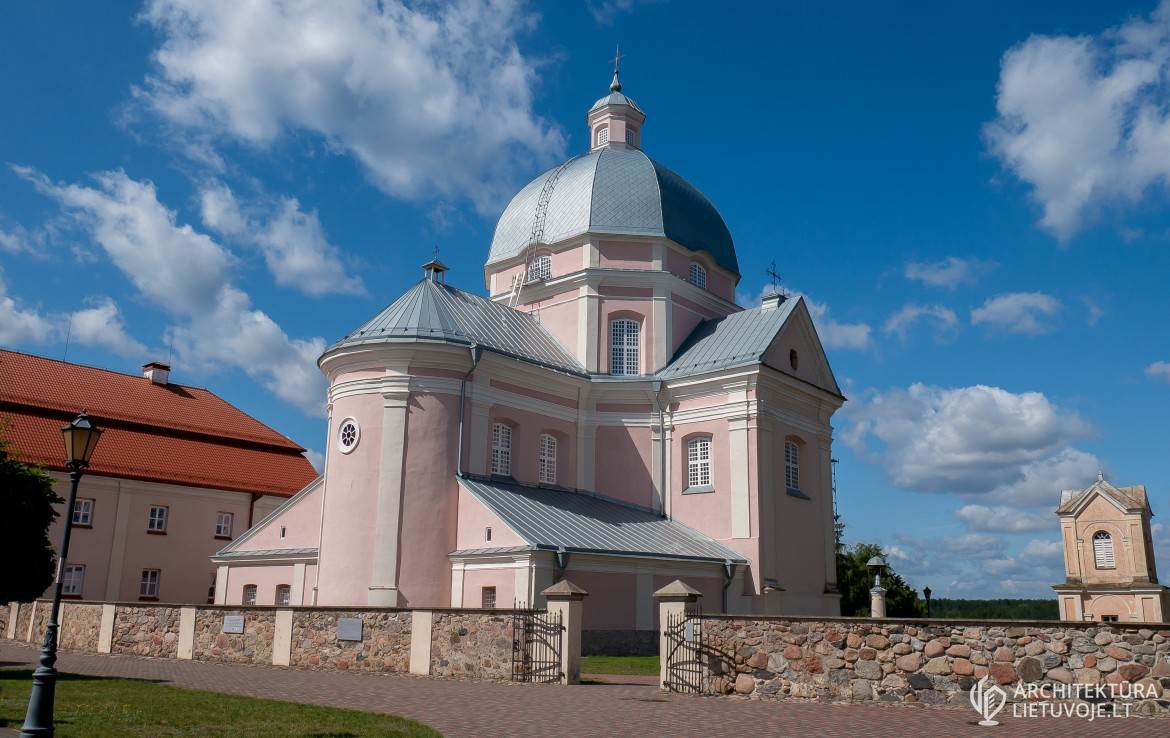 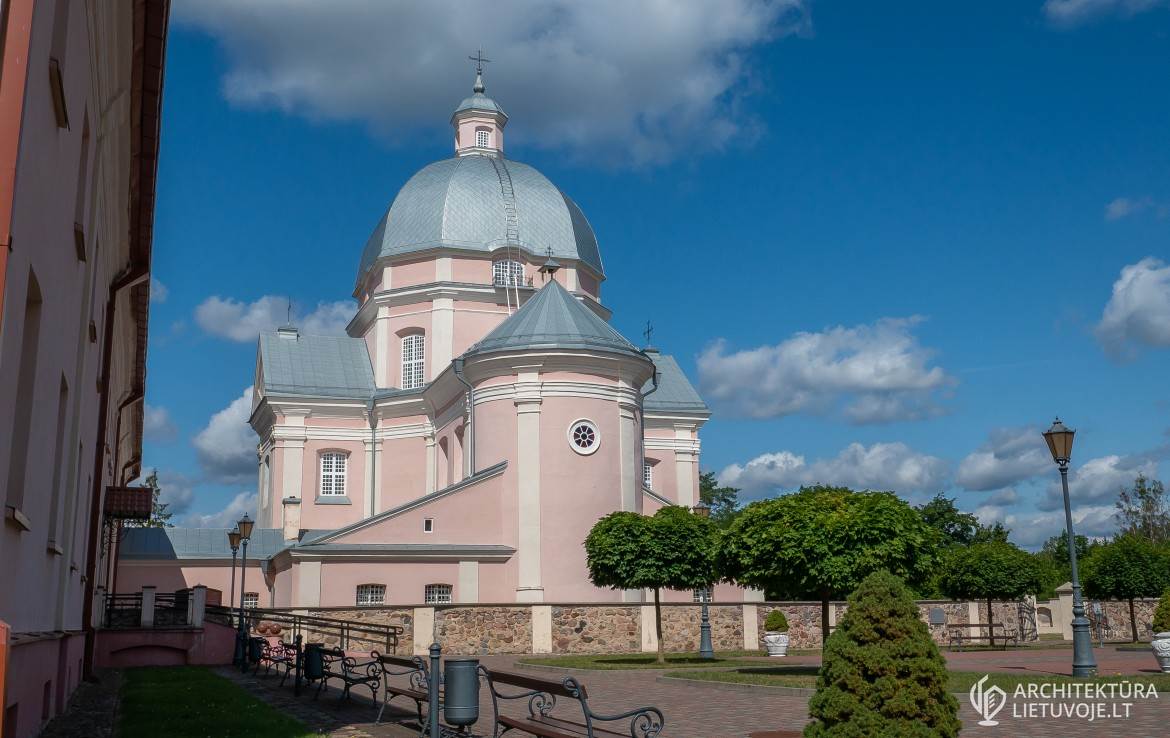 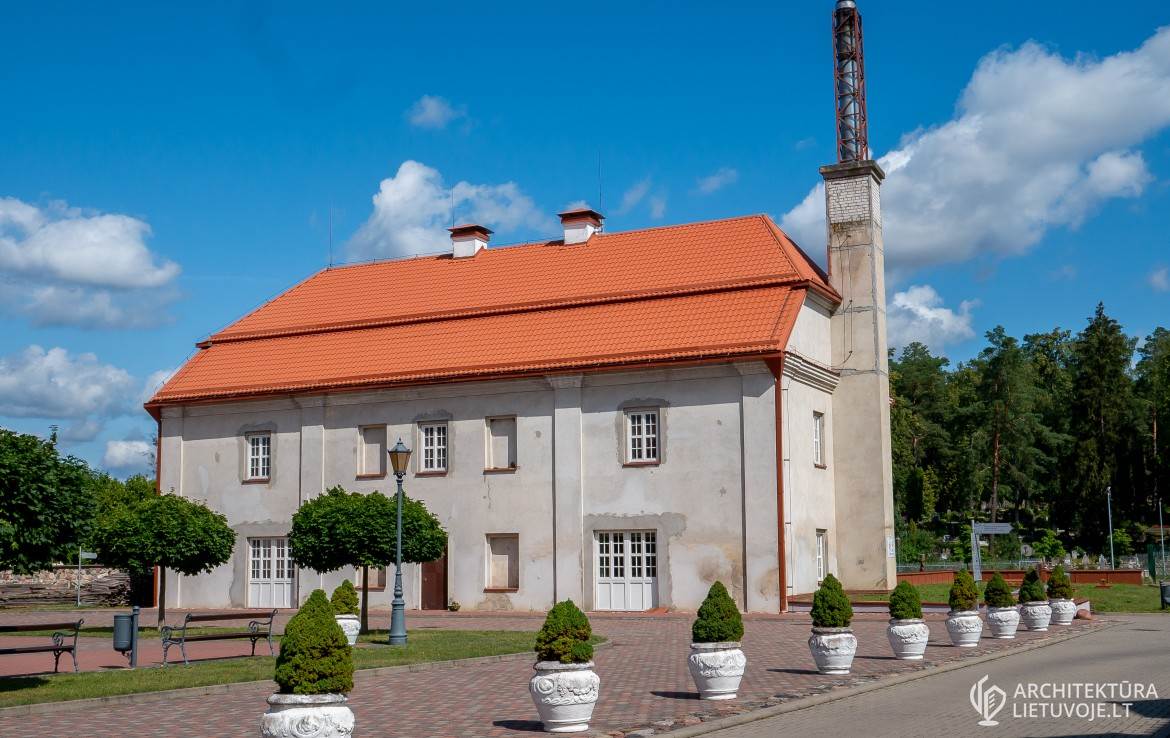 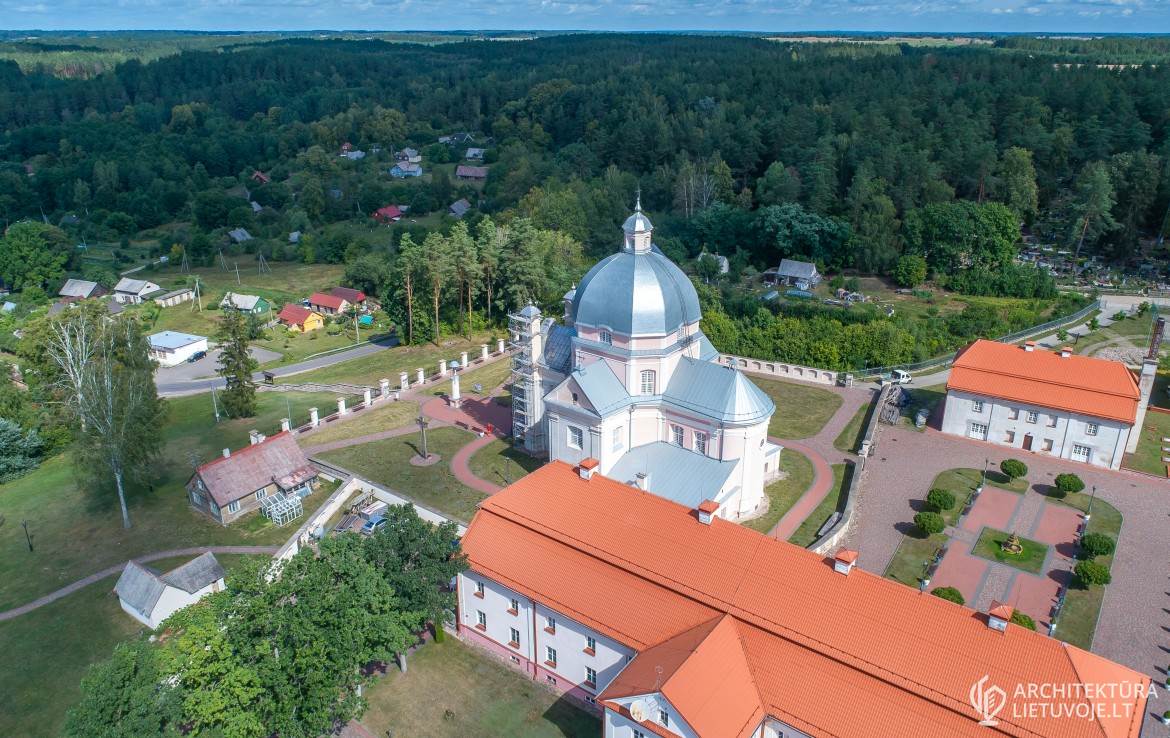 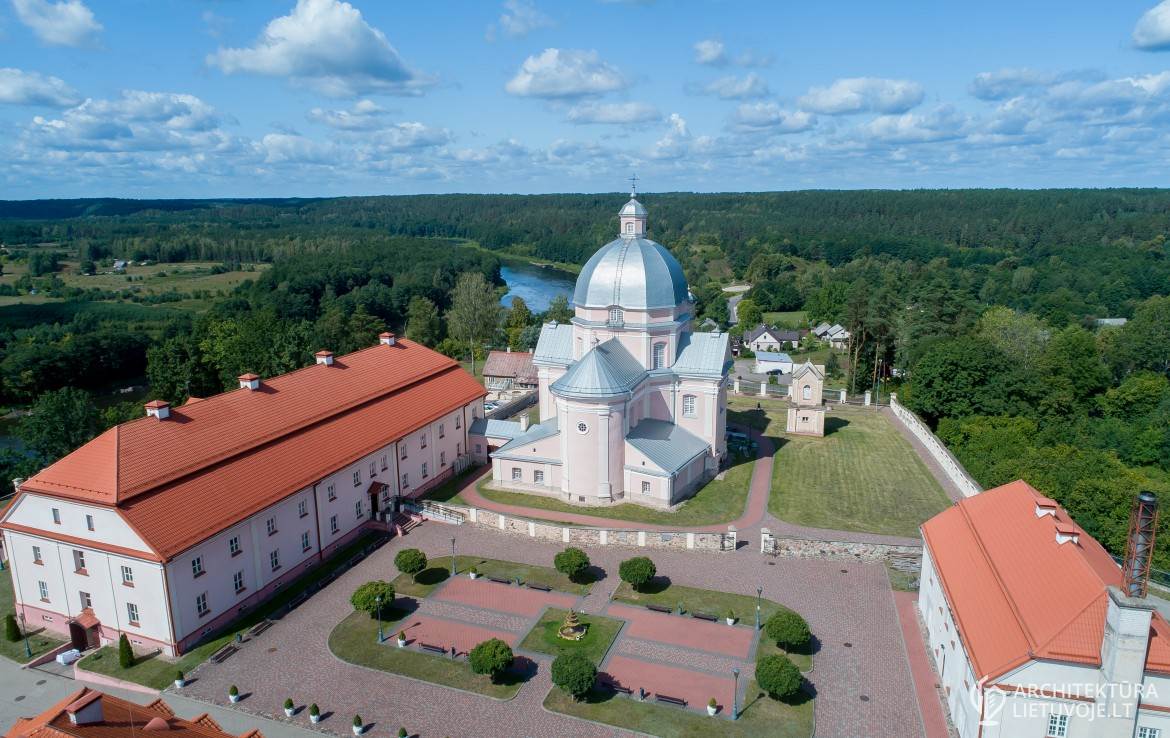 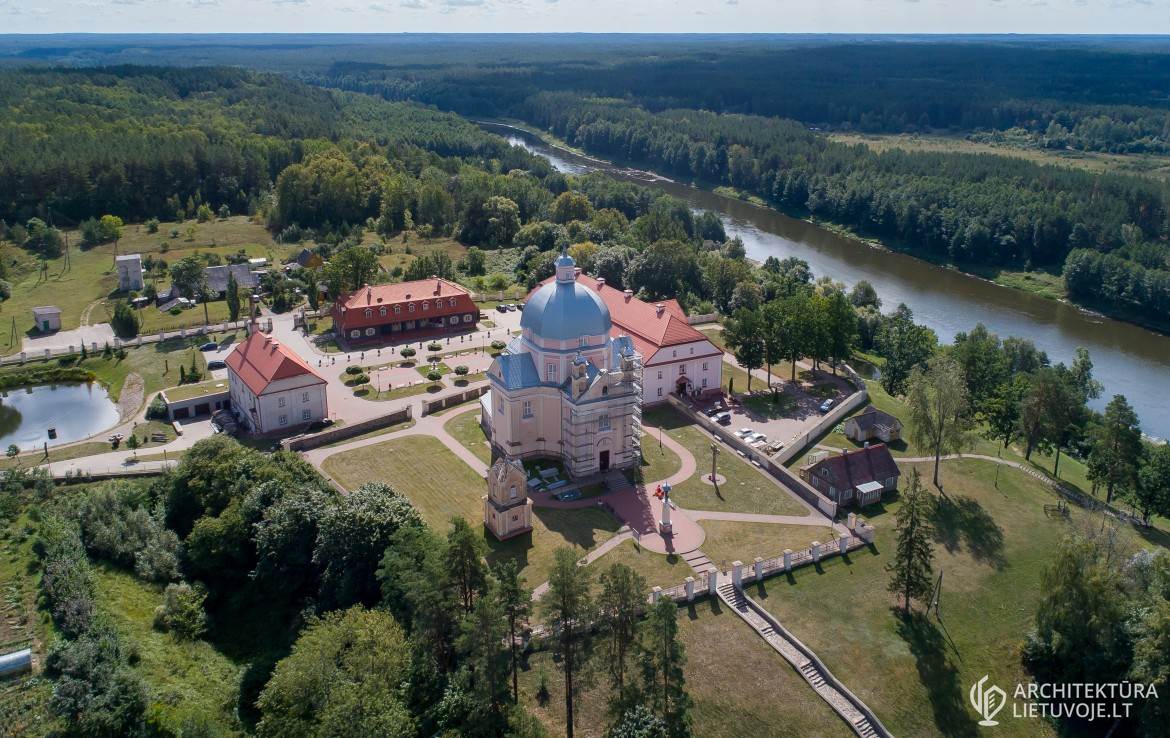 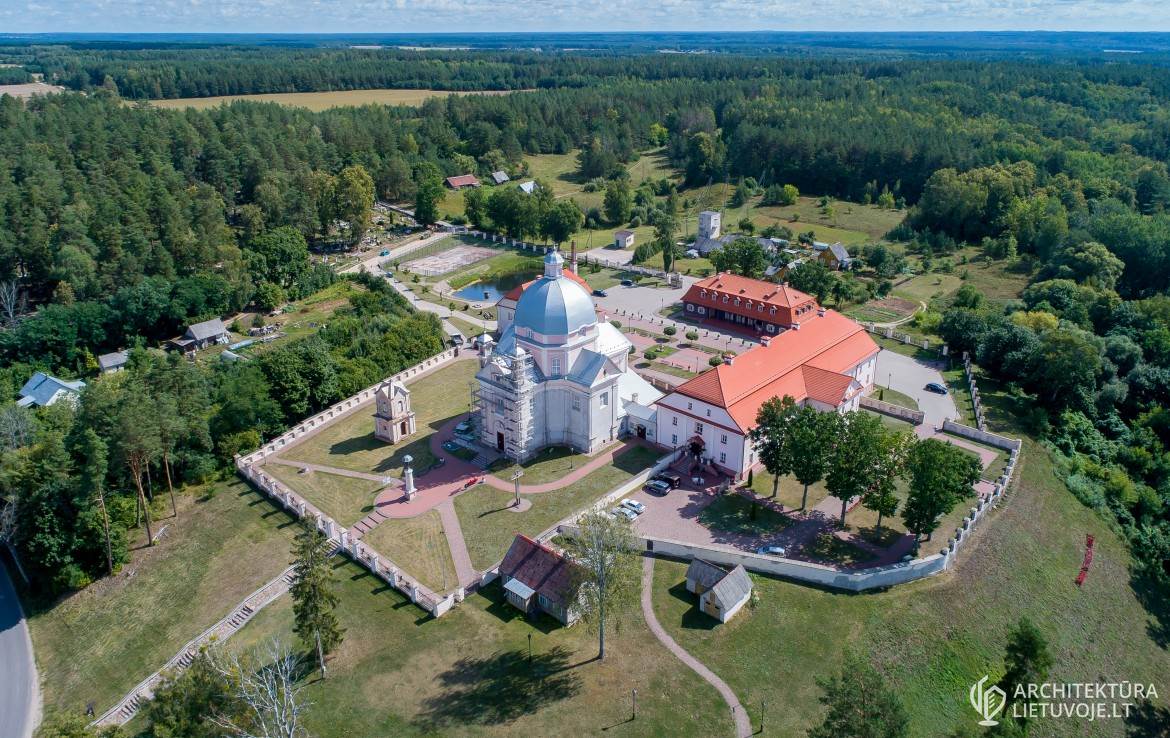 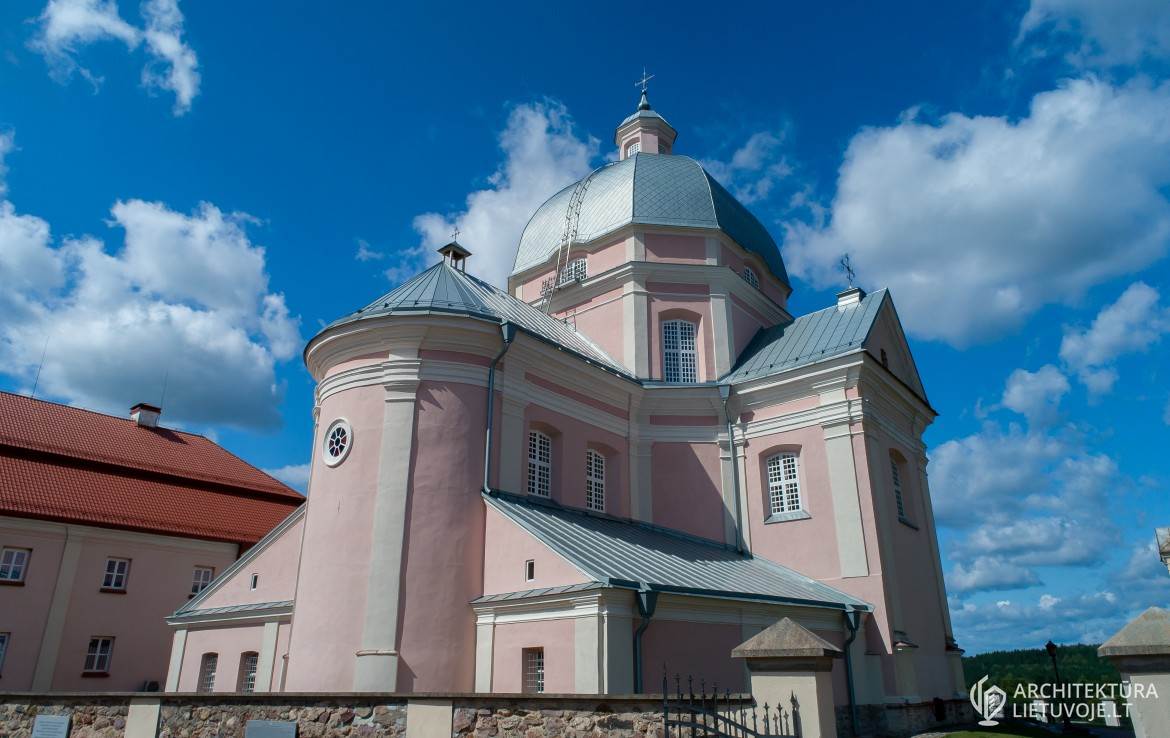