Palace of the Bank of Lithuania in Utena

Palace of the Bank of Lithuania in Utena

From the second half of the third decade, in smaller towns of Lithuania, the most important public buildings used to be built – schools, banks and Houses of Riflemen performing a cultural function. Particularly monumental was the building of The Bank of Lithuania in Kaunas: mostly thanks to Mykolas Songaila, who even in the 20-ies had drawn up the project of this building, which was the first and the main edifice of one of the most important financial institutions. The architecture of banks in smaller towns, built in the 30-ies of the 20th century, although retaining monumentality and architectural accents, characteristic of Classical architecture, was inter-twinned with Modernism tendencies: many of them partly could be named “undressed Classicism”. Maybe more modern expression of these buildings was determined not only by changing fashions in architecture, but the fact as well, that one of the most prominent “modernists” from Kaunas, Arnas Funkas, authored or co-authored many of them, in collaboration with M. Songaila.

One of the first such buildings, drawn by A. Funkas, appeared in Utena that was a rapidly developing town at that time. The building has a partly symmetrical plan of the letter “H”: the front and the rear parts of the building are joined by the vertical central block, where the heart of the bank is set up – the operations hall. The hall is surrounded by single-storey parts, slightly recessed. Thus, the side facade facing J. Basanavičiaus street creates the divided, seemingly consisting of several buildings, development. Yet, symmetry dominates on the facades corresponding to different volumes. The main facade is symmetrical like of Classical style too: although the forms made of modern type, still monumentality is created here via the rhythm of ledge verticals and a large cornice on the top of the building. The entrances are accentuated by large concave trimmings. Still, if one compares this building with The Bank of Lithuania in Kaunas, or even with a bank building in Tauragė, which was erected later, Modernism spirit is sensed here first of all.

The synthesis of classical monumentality and modern forms is sensed even upon entering the building through its doors: the light, laconic interiors, characteristic of Modernist spirit, are combined here with the means reflected representativeness even at older times, such as the use of artificial marble in the columns, surrounding the hall. Like many other buildings of Lithuanian banks, which survived into our days from the inter-war period, the building has retained its function and part of original elements of the interior, even throughout the Soviet times. Part of furniture pieces has survived as well – in the operations hall one can see even today original tables and settees of Modernist forms. Other exhibits are no less characteristic of the representational building – all doors interspersed throughout the space or a spiral stair at the rear part. True, an addition was blocked to the building, reminiscent of Soviet Modernist architecture – still the architect showed respect to the neighbourhood of the historic building. 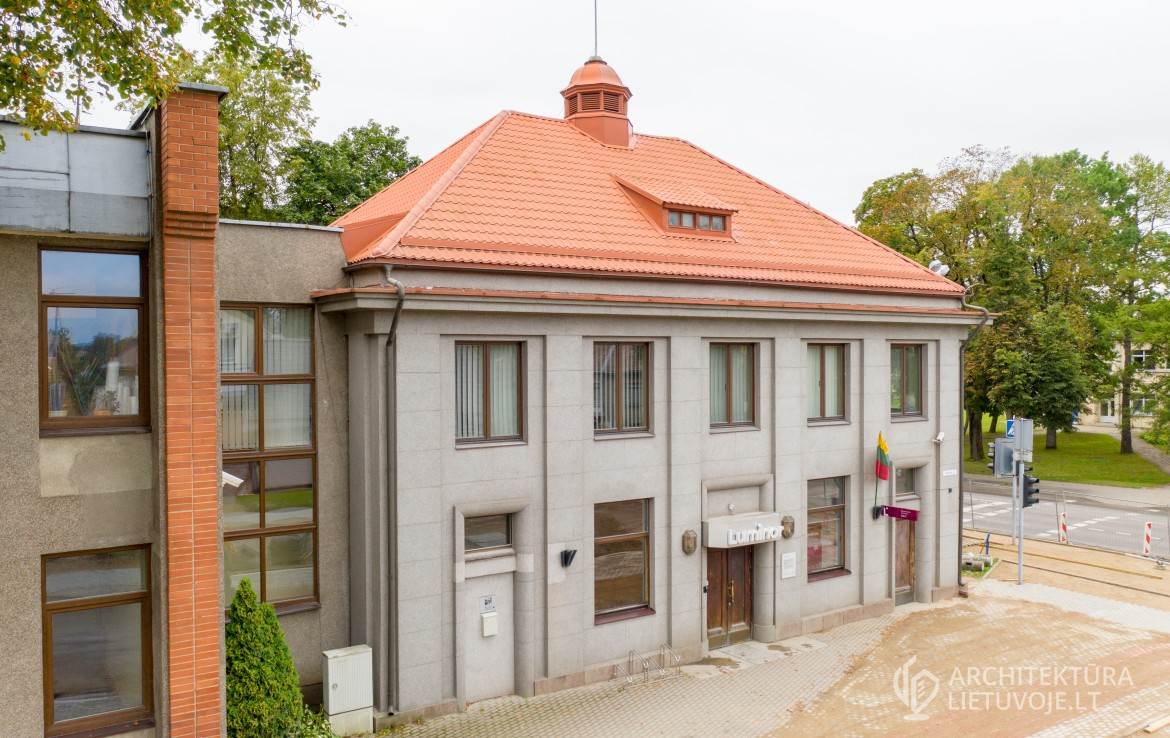 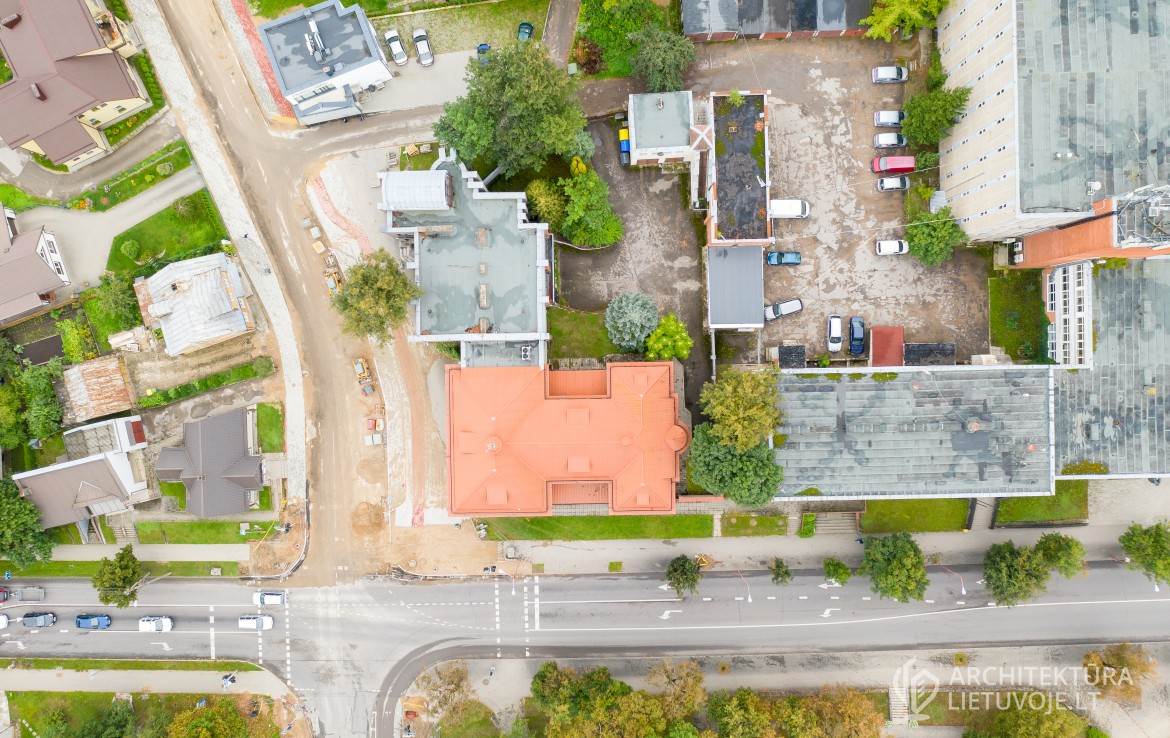 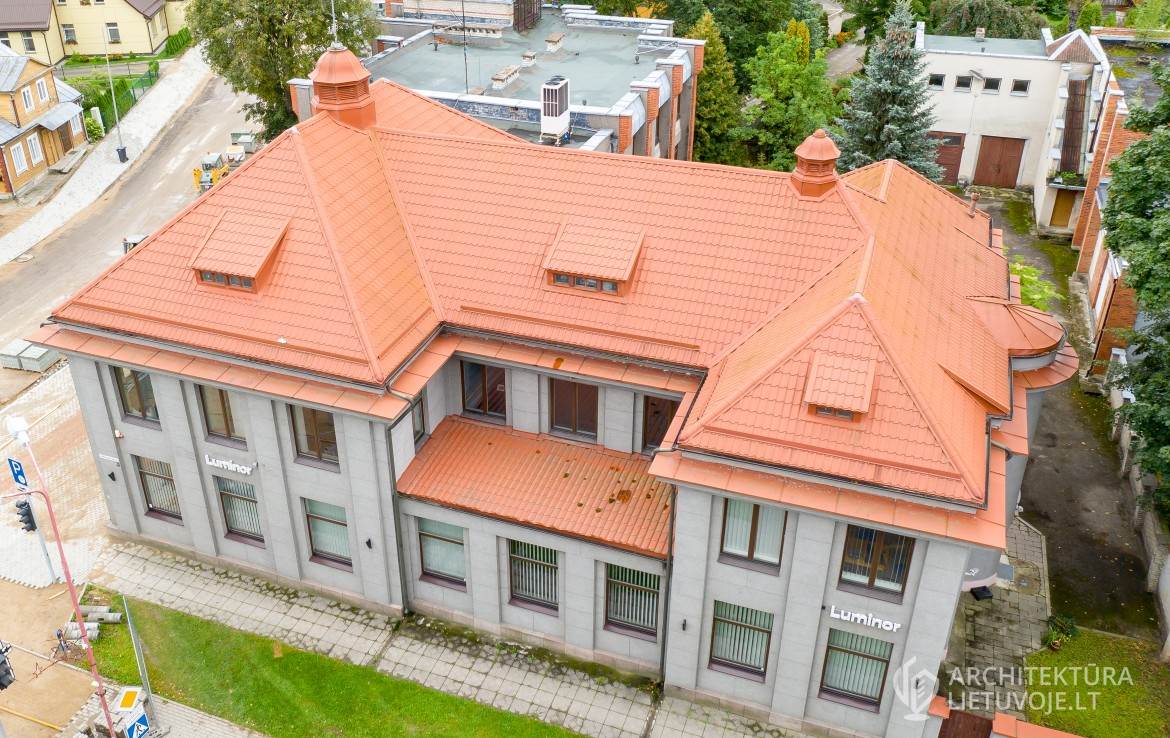 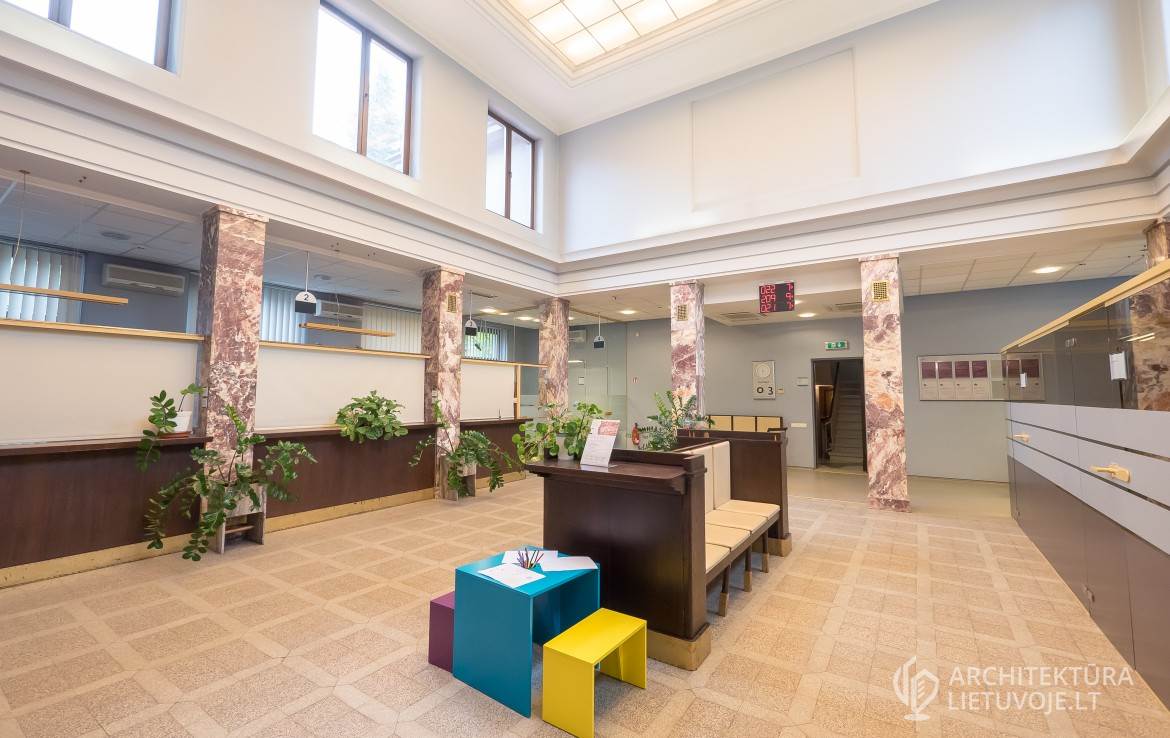 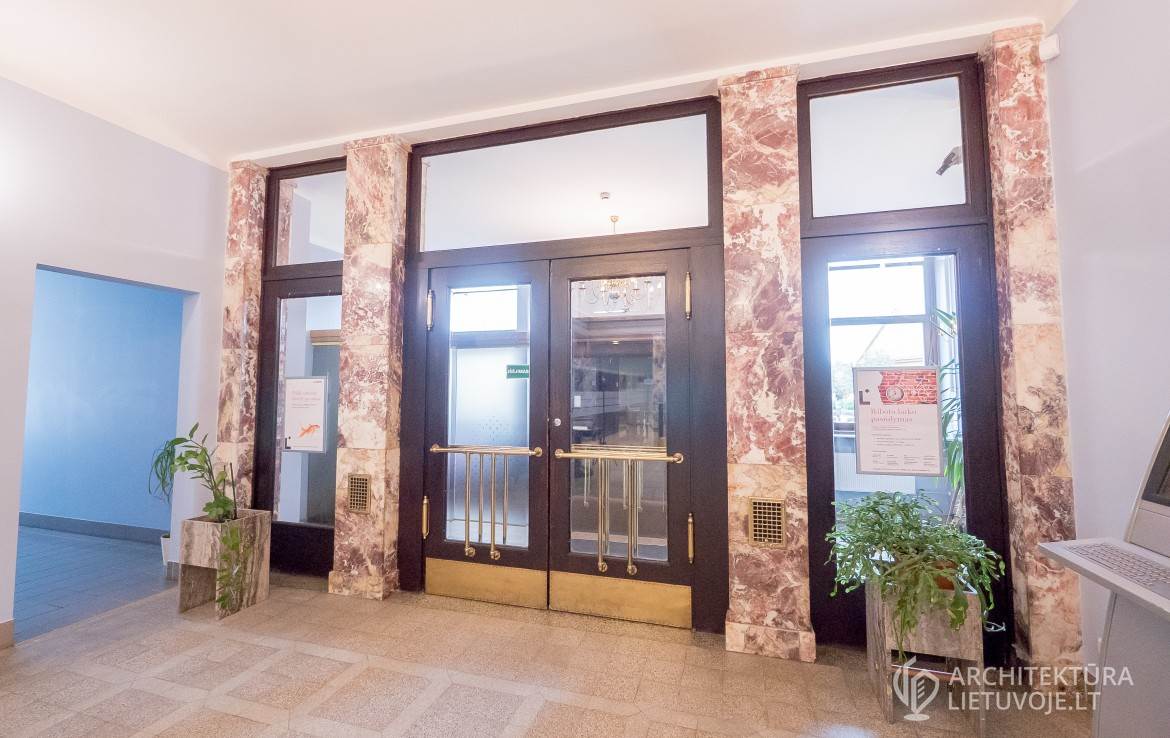 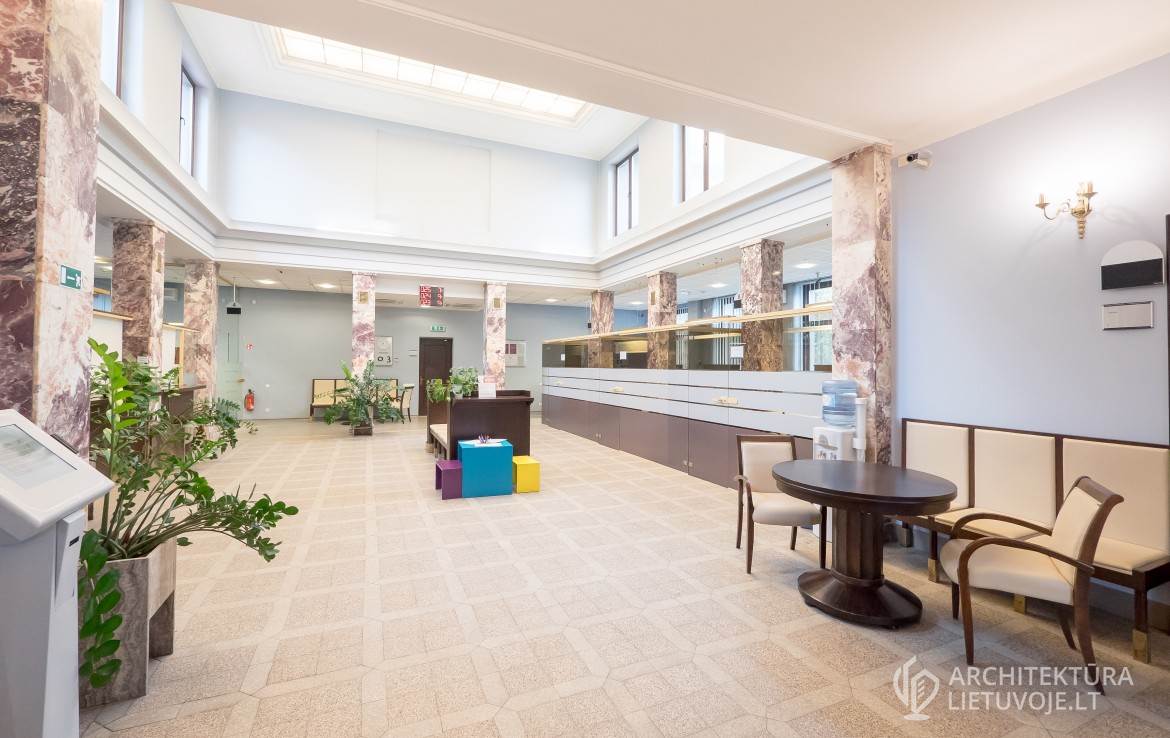 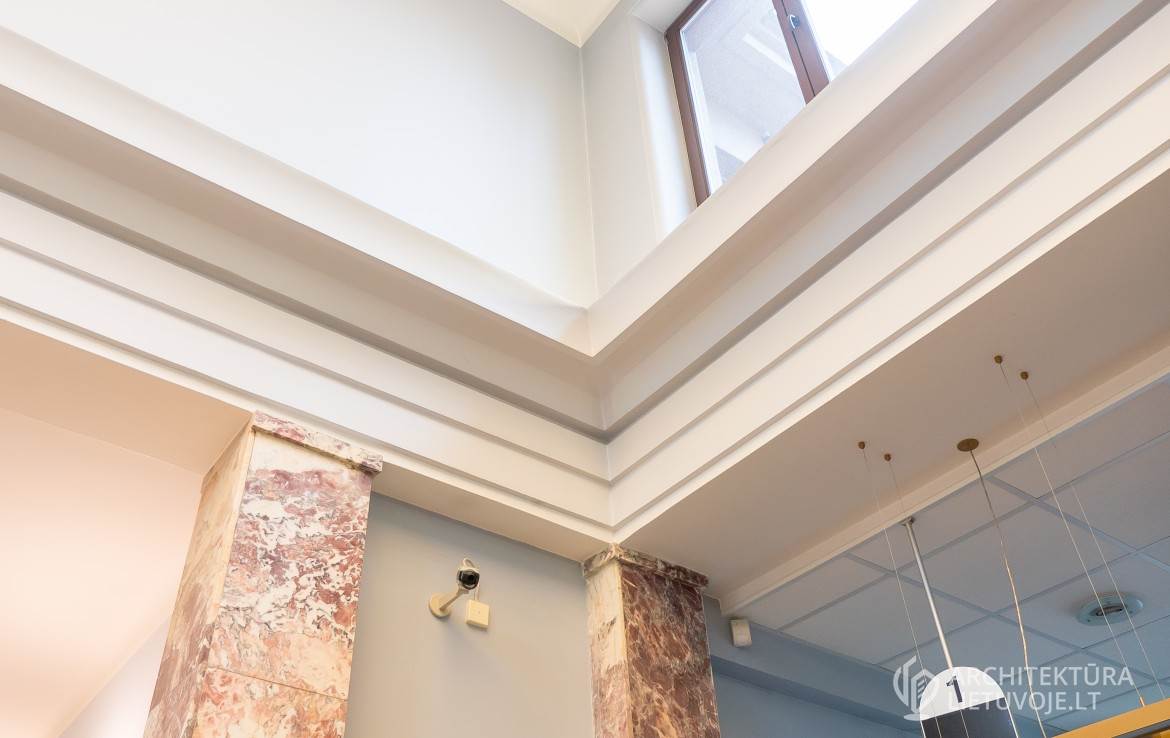 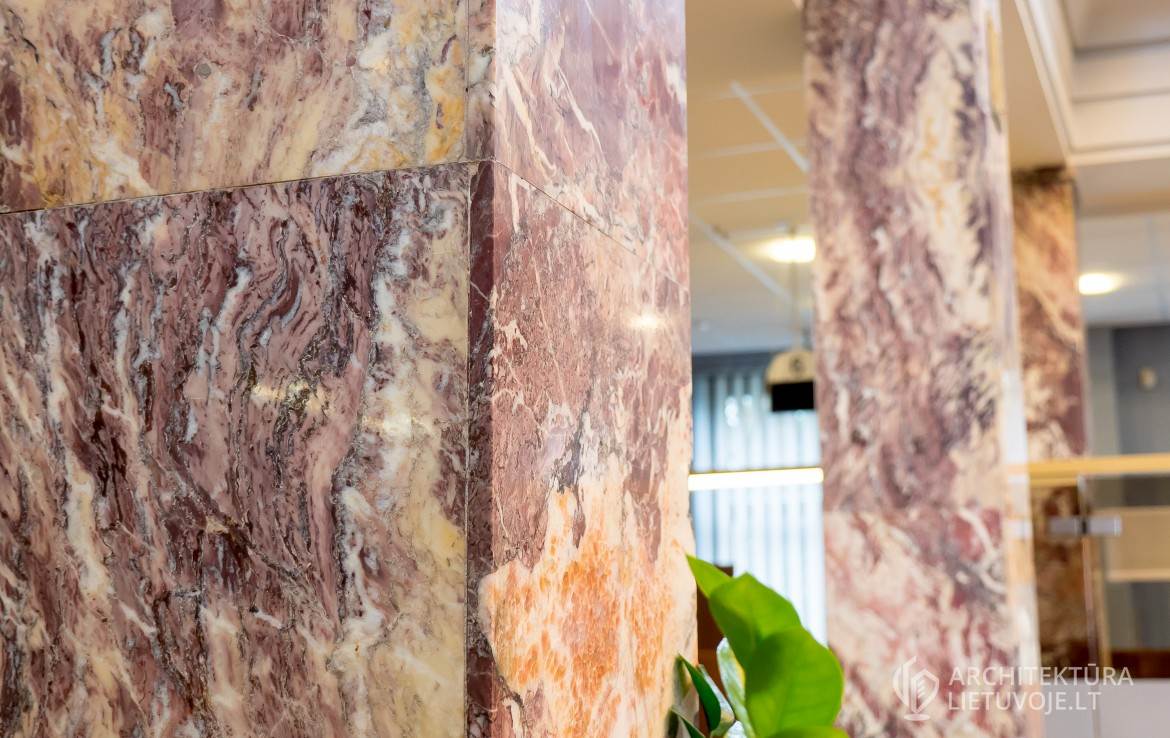 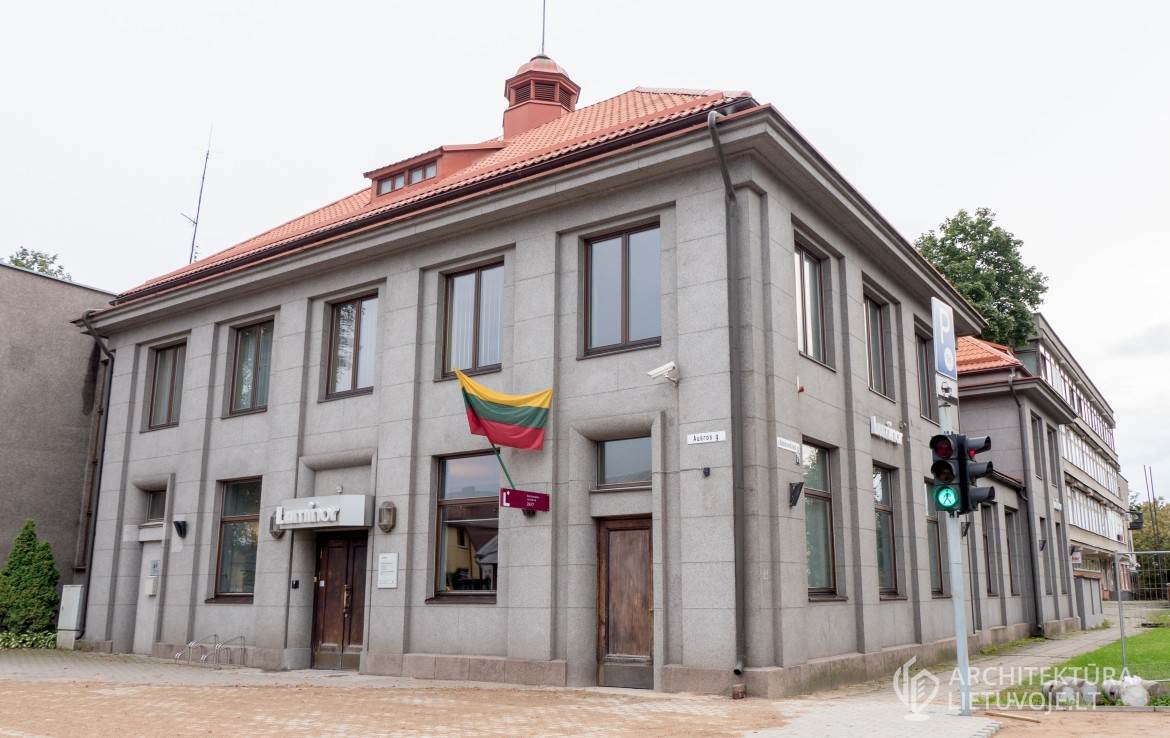 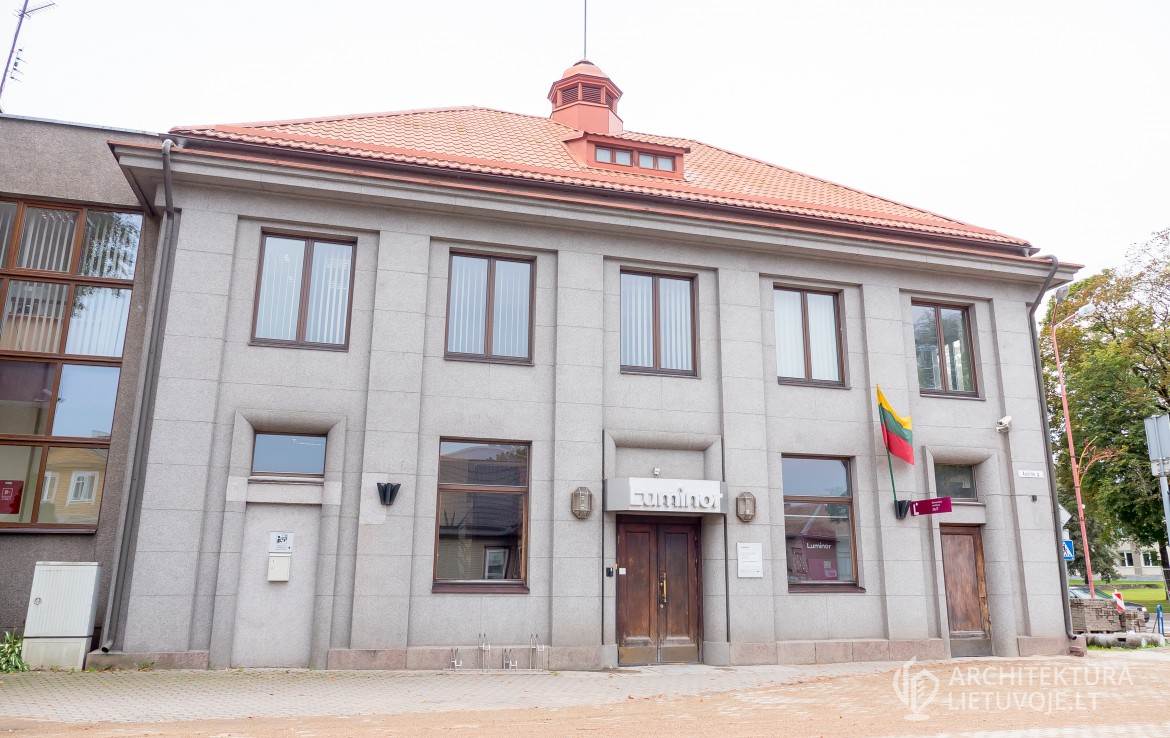 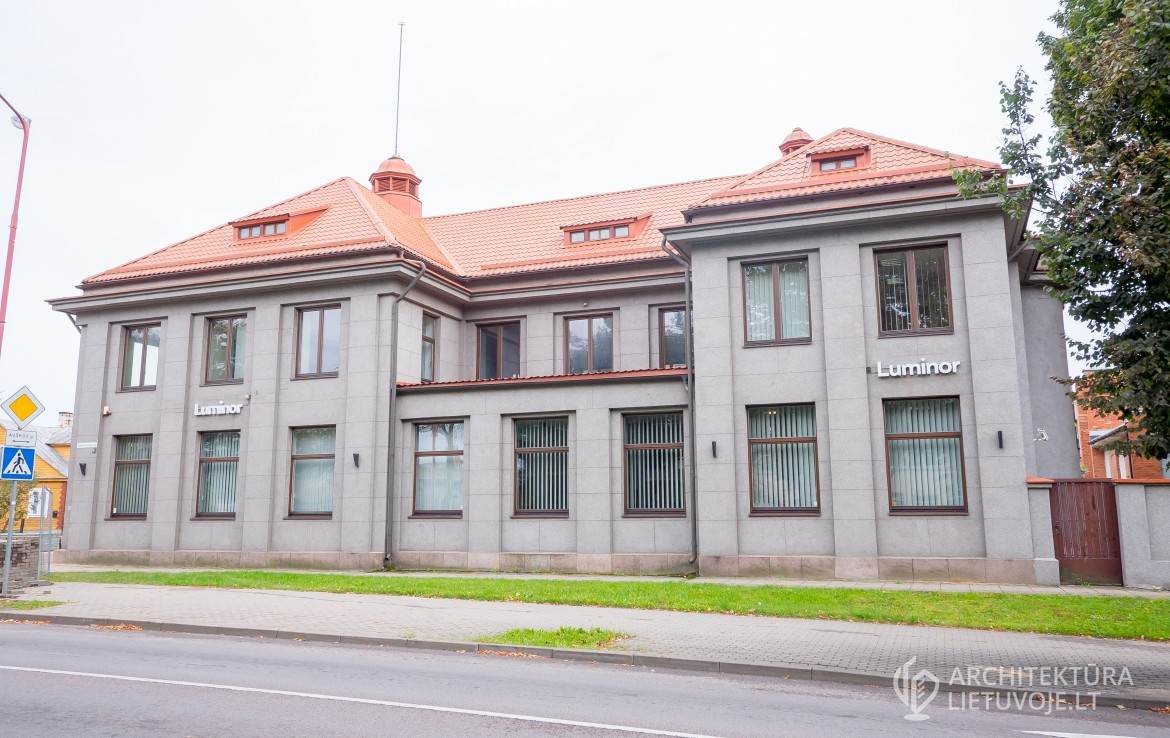