In the 1920s, the economic situation of the young Lithuania was quite difficult. The situation was worsened by the fact that the capital had to be immediately relocated to Kaunas, which was not prepared for that: the premises were scarce not only for the swarming civil servants, but for the institutions themselves as well. Priorities had to be set thoroughly, which “government” buildings were necessary the most. It is no surprise that one of the first international architectural competitions were announced for the headquarters of the Lithuania Bank: the need for a new bank building was not only huge, but it was also a certain symbolic gesture, that was supposed to illustrate the country’s economic stability. Having chosen the project of Mykolas Songaila, the most productive architect of the 1920s, the new palace opened its doors on the corner of K. Donelaitis and Maironis streets in 1928.

Monumental, somewhat modernised neo-Classicistic forms, which were not alien to the architect himself, have been chosen for the new building. The corps, located by the street, are interconnected with a rounded part covered with a dome, which is not only one of the main accents of the building, but also reflects the tendency to architecturally mark the intersections of the streets. The magnificence of the building is created through pilasters splitting the main façades, a wide entablature strip, and a bulky, highlighted granite plinth. The imitations of balustrades “frame” the rounded windows of the first floor from below, and a stylised rustic on the sides. The line of windows on the third floor on the main façade from the Maironis street just seems to “break”. In the pane connected with a triangular pediment, a semi-circular window, split into three parts, is incorporated. One of the most impressive elements of exterior are built in front of it: a sculptural composition “A soldier, peasants and a worker“ (orig. “Karys, valstietės ir darbininkas”), where the Columns of Gediminas were hidden under a layer of plaster and survived the period of Soviet occupation. This is only one of the elements of the abundant decorative façades: almost every element remained unchanged since the interwar Republic period. Almost each detail seems to reflect the luxury of that time: chandeliers, a fountain, doors, access gates and floral sculptural décor incorporated in niches above the central entrances. Though façades surrounding the inner yard are much simpler, however, they are far from modest regarding the context of the constructions in Kaunas of that time. For example, even the Soviet entrances are highlighted with bulky, protruding triangular pediments and the niche, located at the back of the yard, is decorated with a peculiar “portal”.

The building is much more impressive from the inside: the Historicistic luxury, complemented with art deco quotes, here intertwines with the used of the most advanced technologies of the time: the impressive money vault is still used for its purpose, as well as the one of the functioning elevators of that time. Not only a rich painterly and plastic décor of many premises, which is very expressive in the ceiling design, has remained, but also a considerable part of authentic furniture and chandeliers as well. Natural and artificial marble of few colours, especially highlighted in Ionian columns of the main premises, radiates representativity. Though the building is abundant in decorative premises, however, one of the most unique premises in the whole Kaunas is the main operations room, covered with a massive dormer window, and surrounded by columns and a gallery on the second floor. The glass ceiling is surrounded in relief compositions. As it was typical of the public buildings of that time, part of the palace was intended for the housing of officers. The most impressive residential premises were located in the corner part of the building: on the third floor, in the former apartment of eight, Prime Minister A. Voldemaras was settled. The apartment is considered to be one of the best preserved interwar interiors, where we can see another spectacular area: the minister’s former office under the dome, with convex decorated caisson ceilings and black marble pilasters in the walls.

Almost each of the most important premises of the building are individual and giving an opportunity to not only get our hands on the Lithuania of that time, but also take a look at the fact, how Historicistic forms were considered as the most appropriate for representation in the 1920s. Though the modernism era of Kaunas soon began and the old aesthetics were left behind, but the need for the “historic” representation, which was expressed through much more stylised and modern forms in the 1930s, was still felt in most important administrative buildings. It is worth mentioning that Mykolas Songaila still remained the “full-time” designer of bank buildings in smaller towns of Lithuania, but the featured Classicistic spirit was much more “bare” and adapting to the spirit of that time. 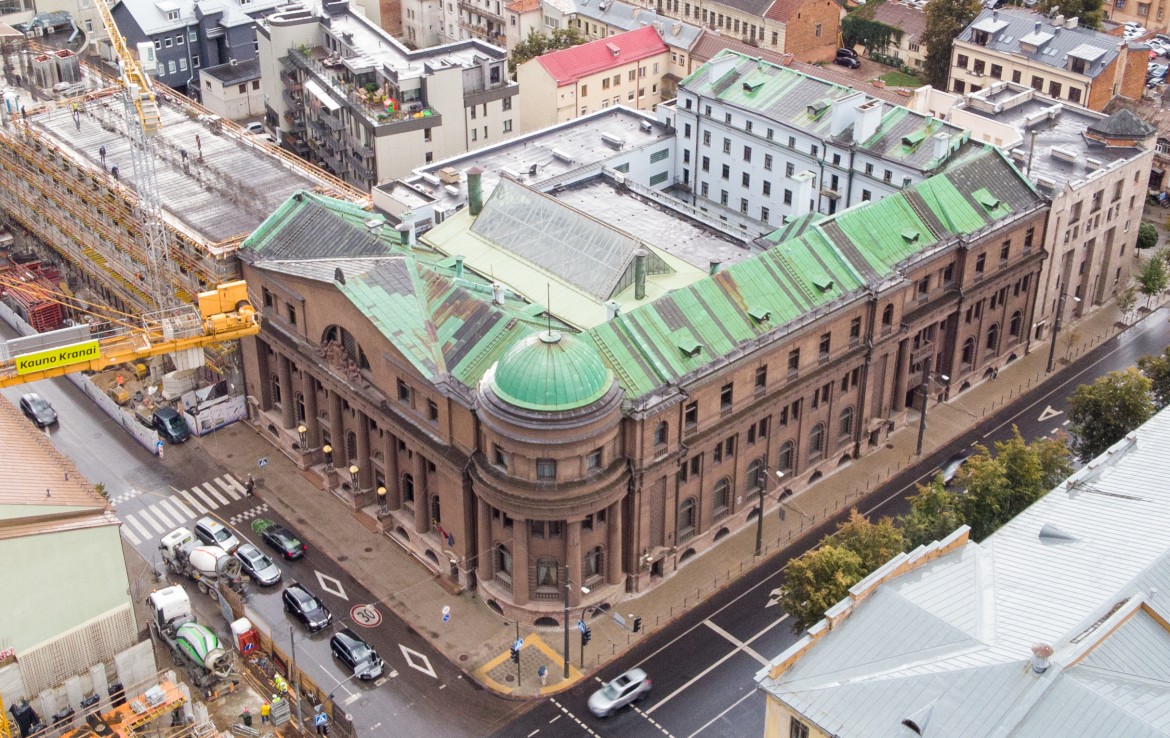 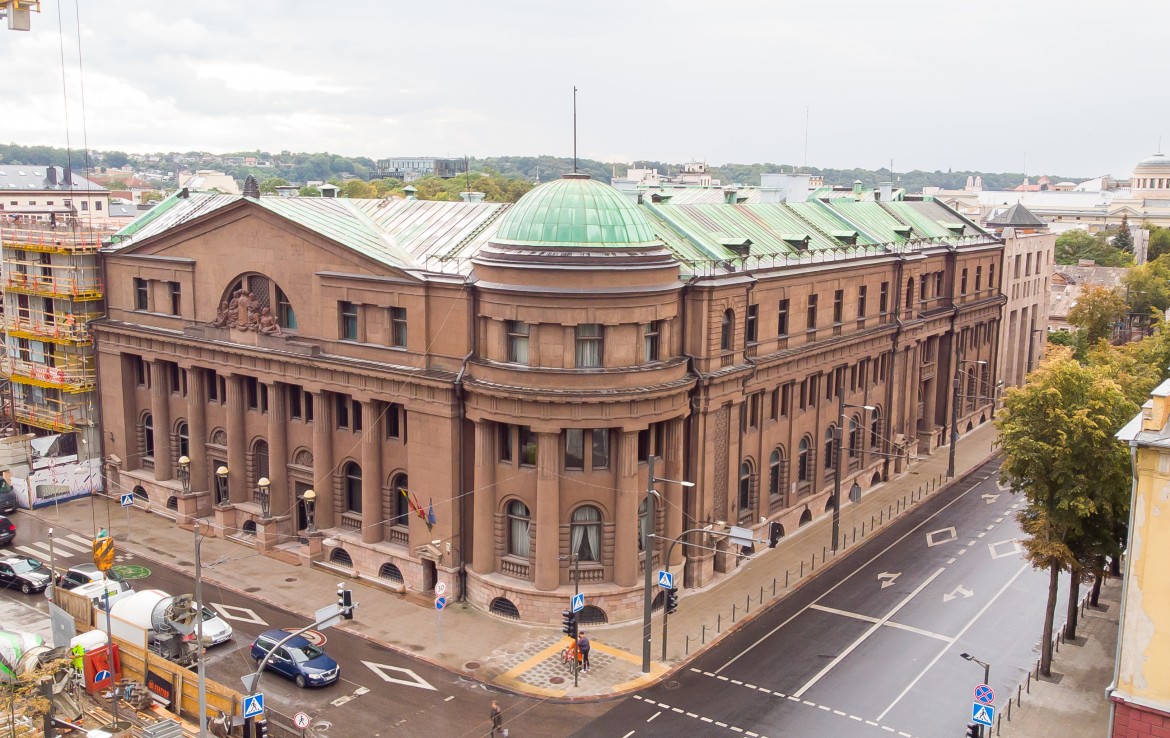 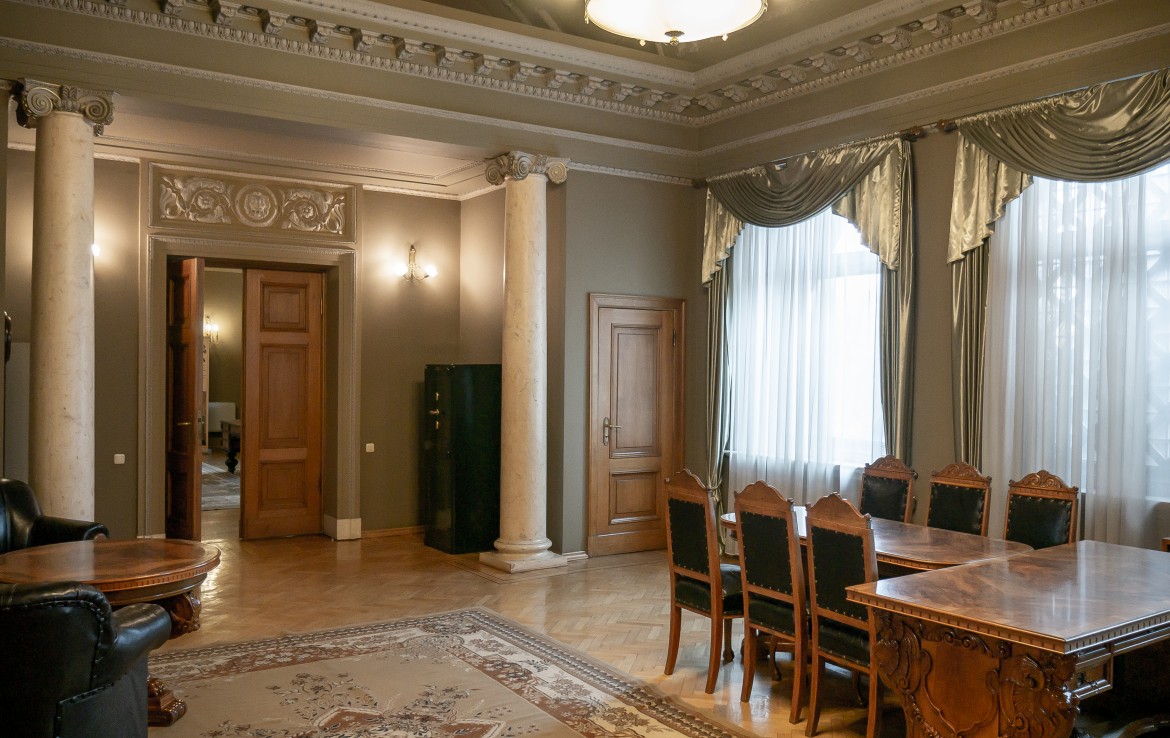 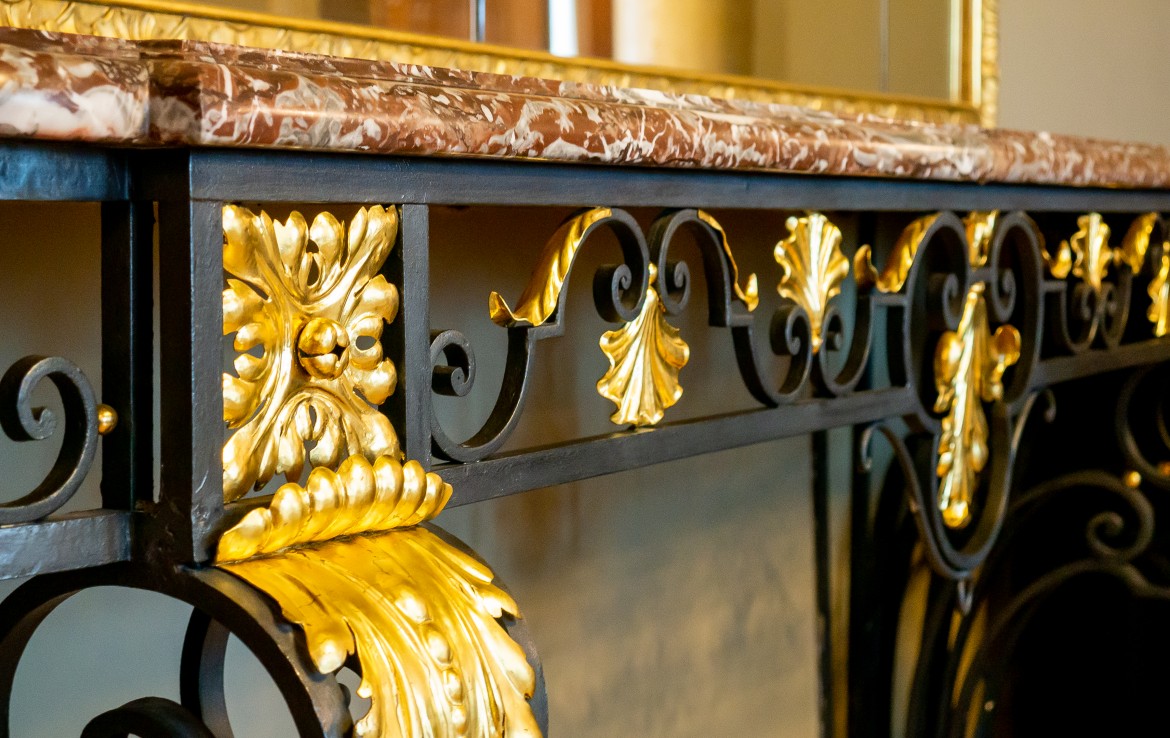 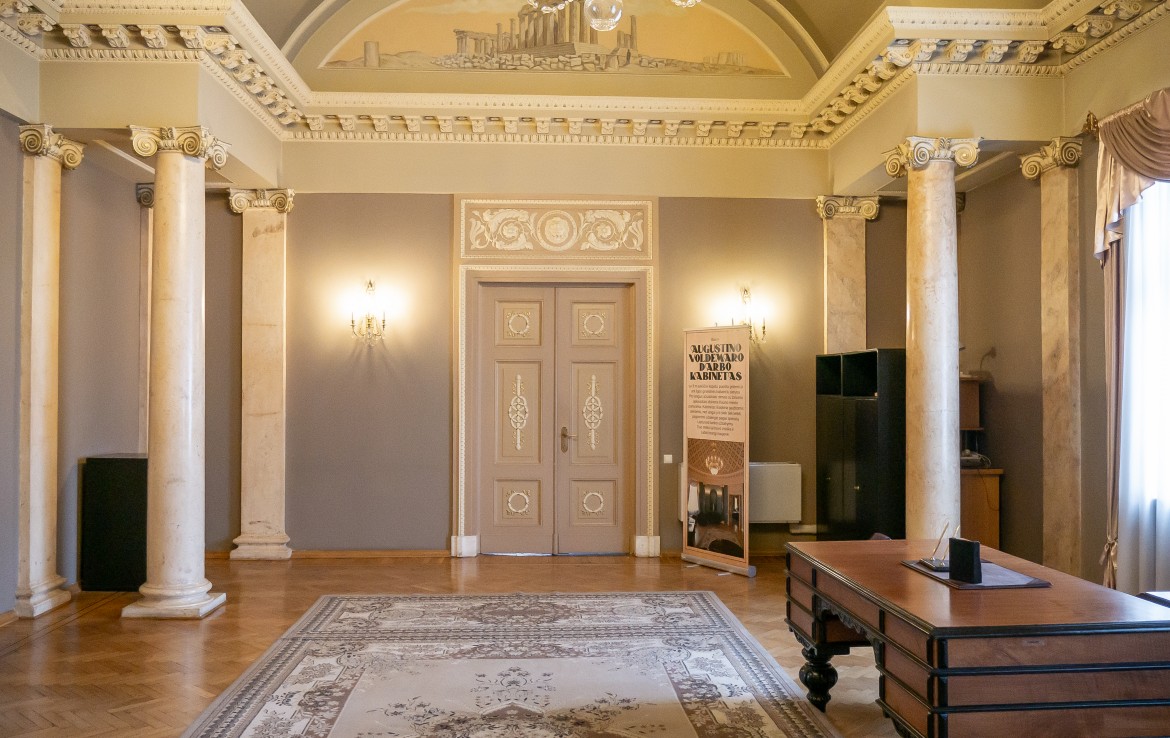 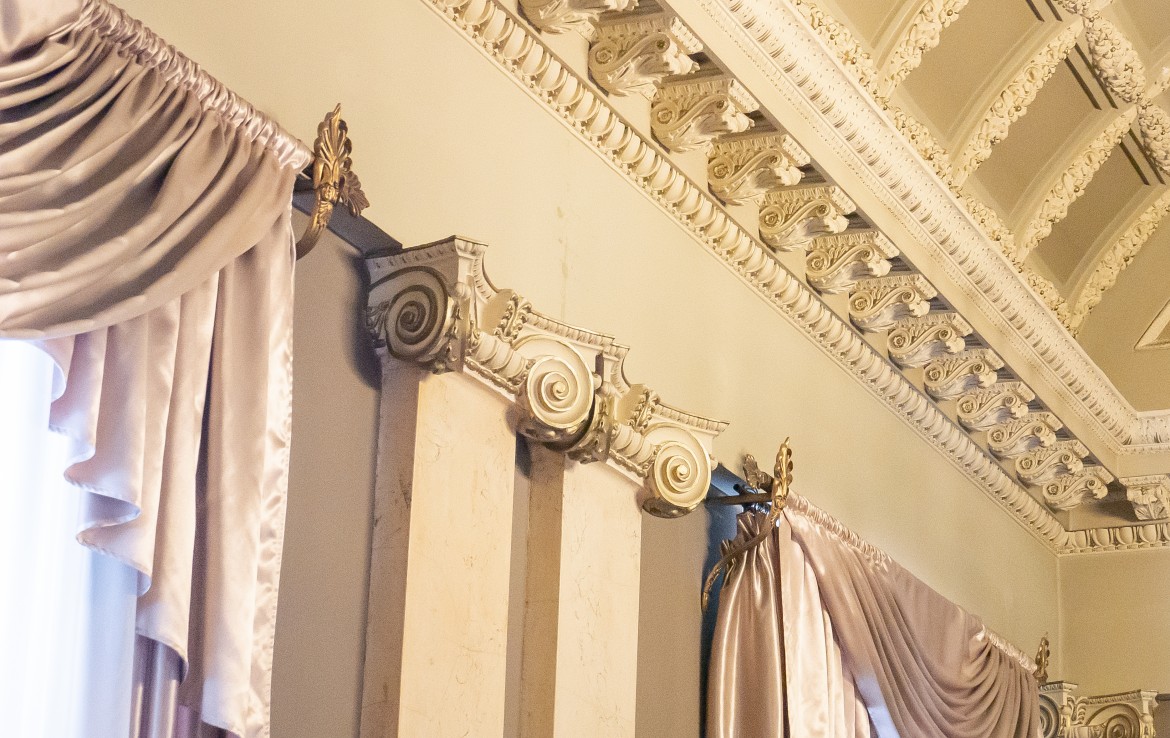 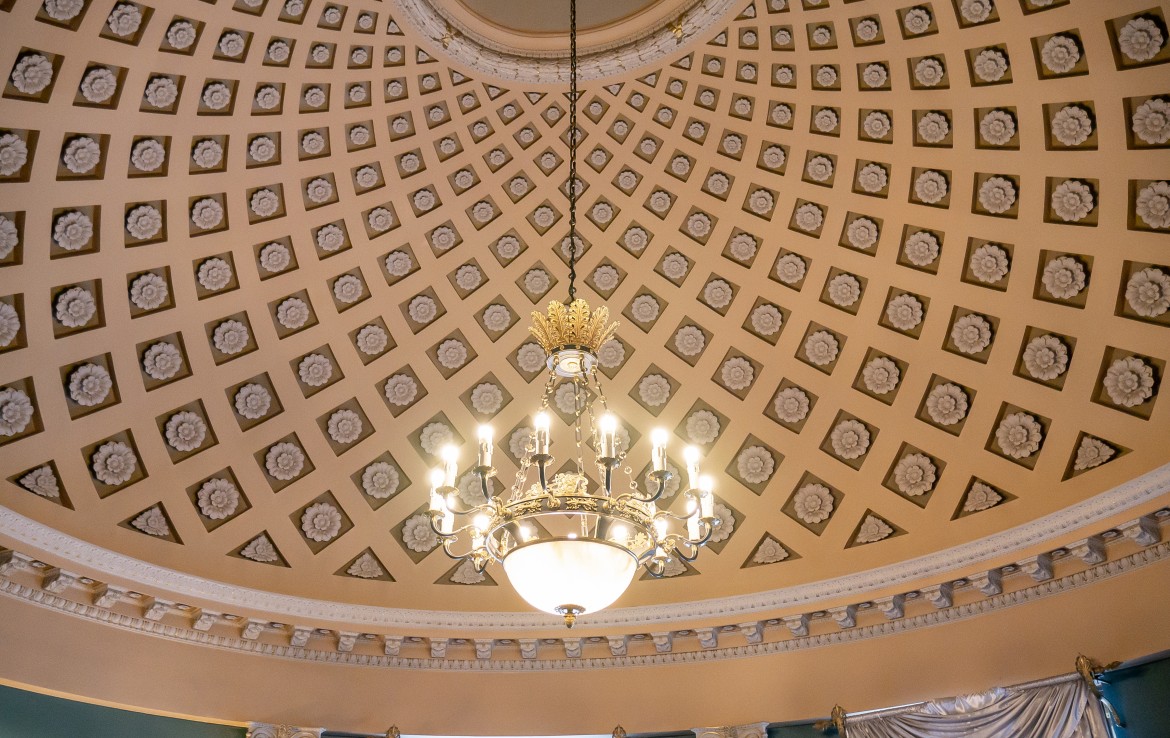 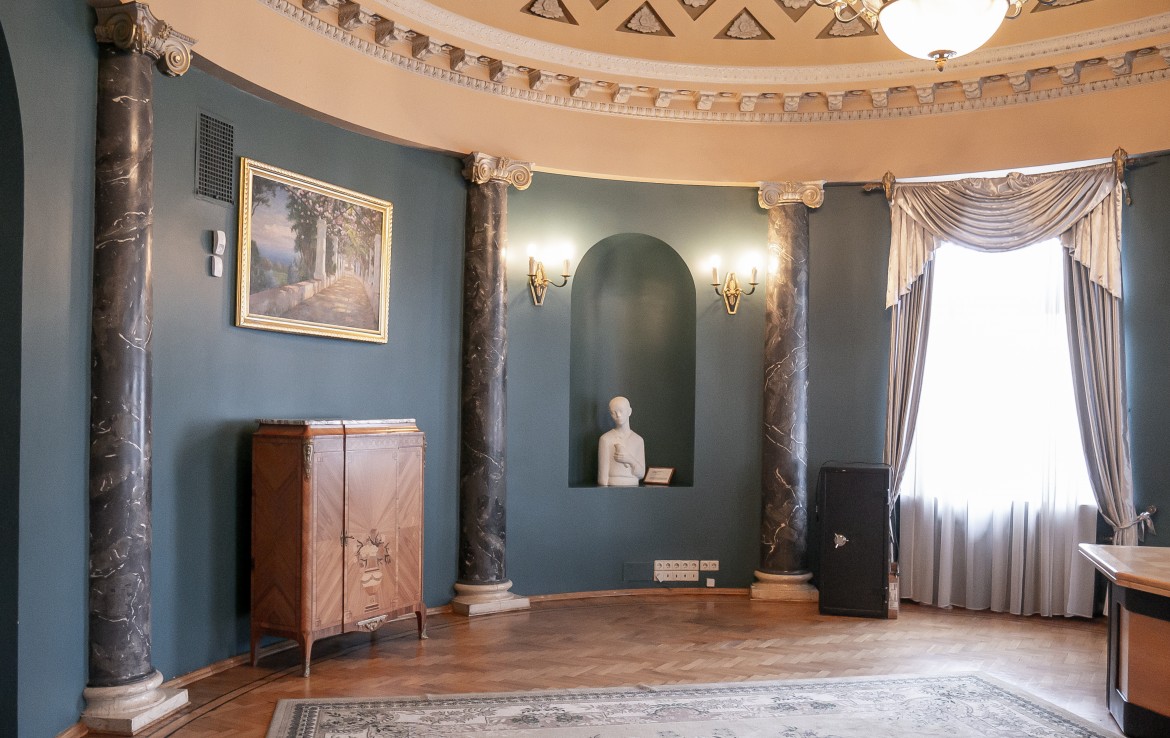 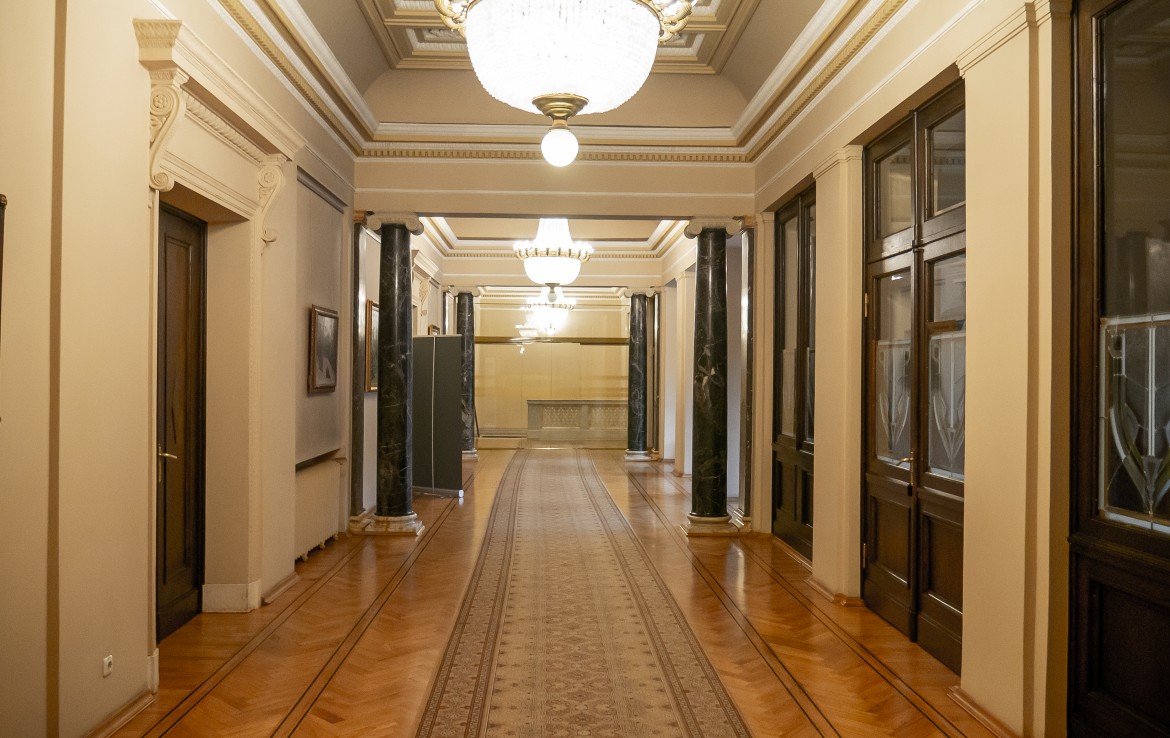 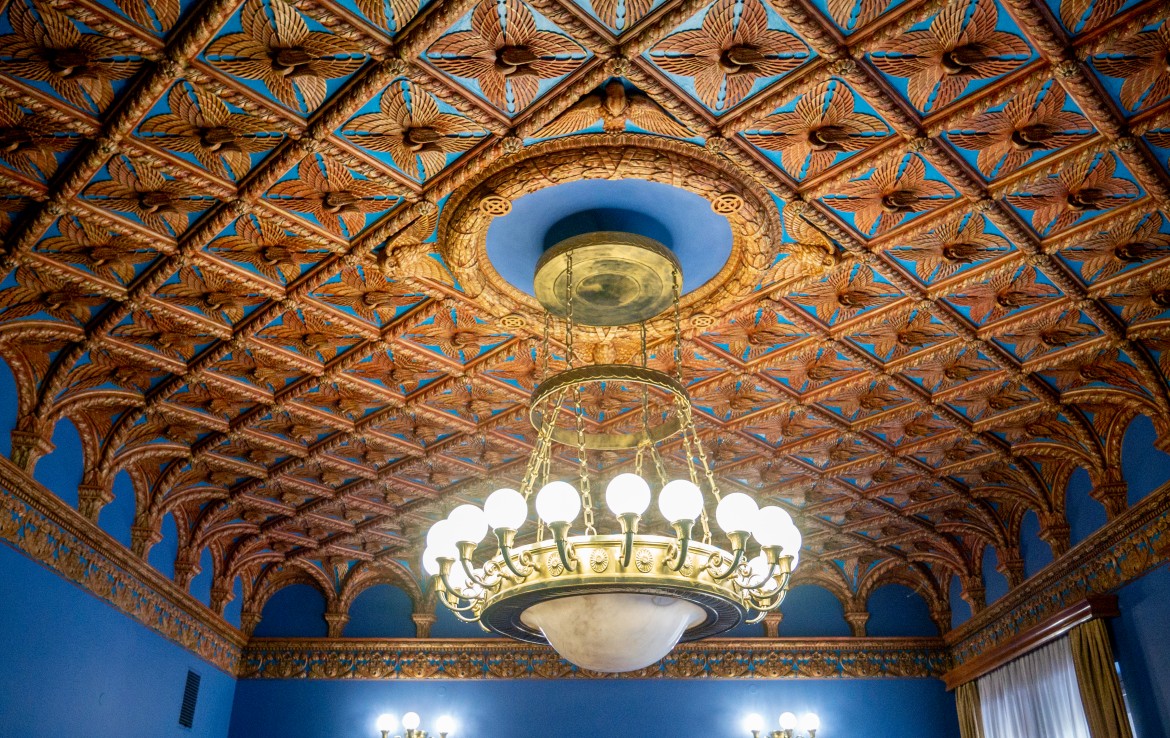 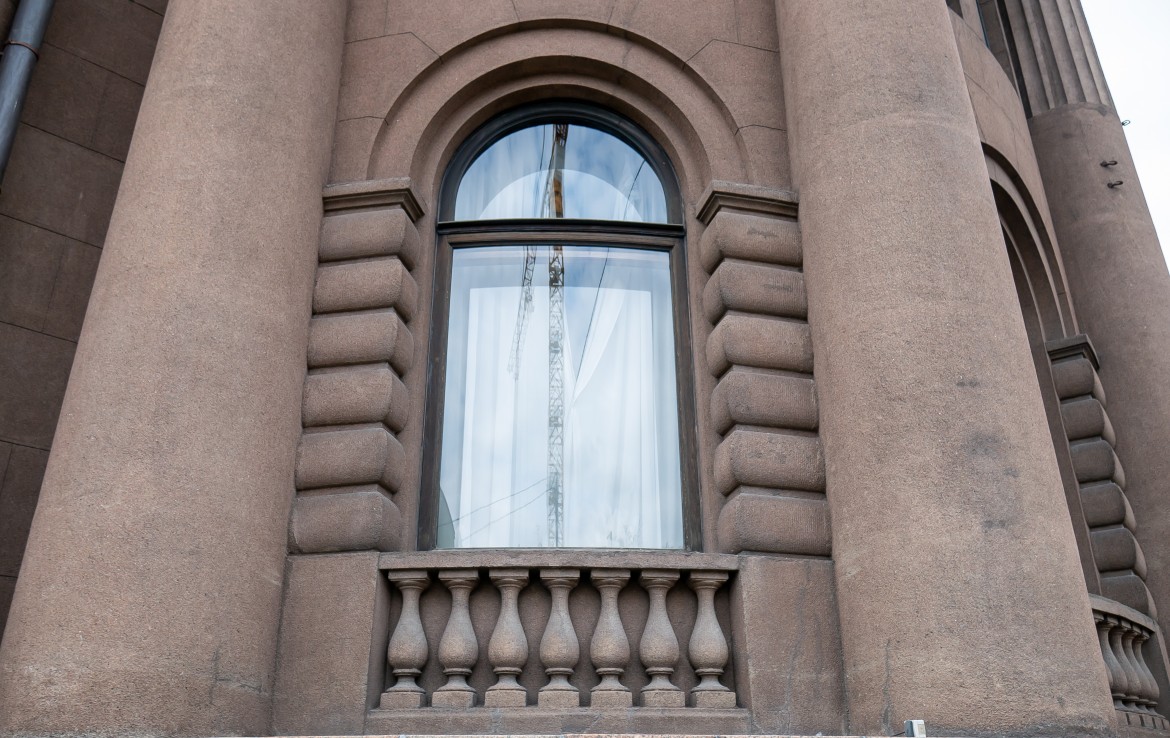 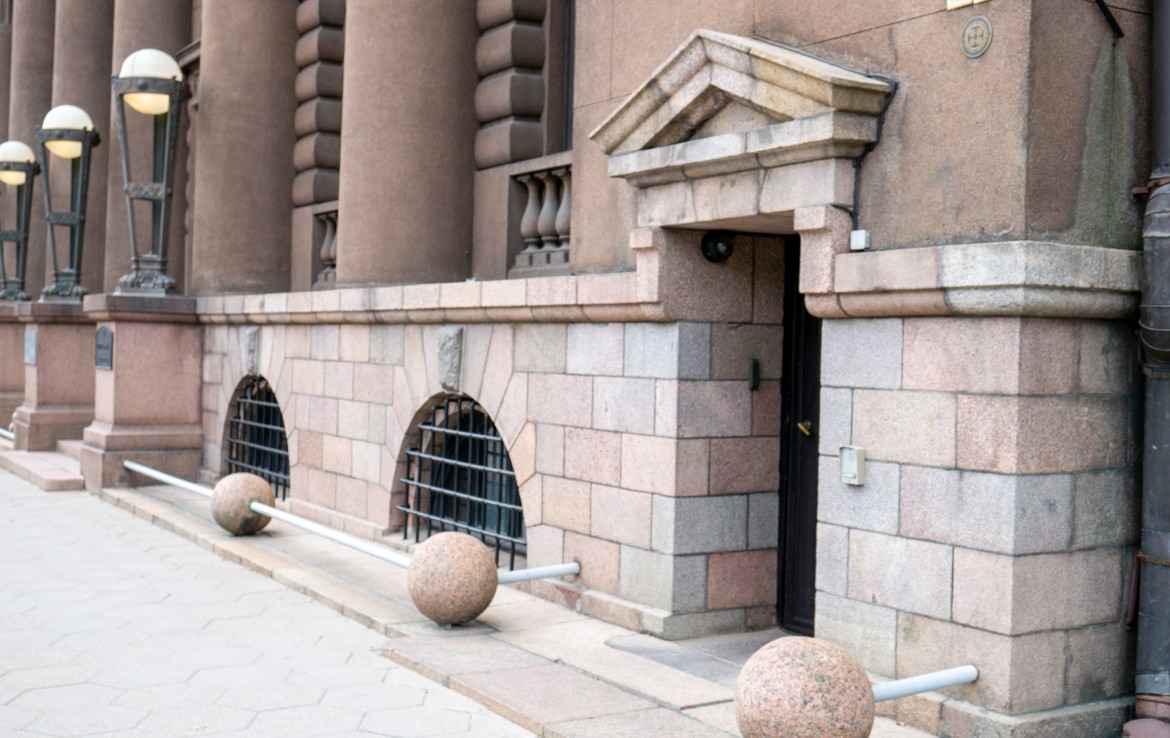 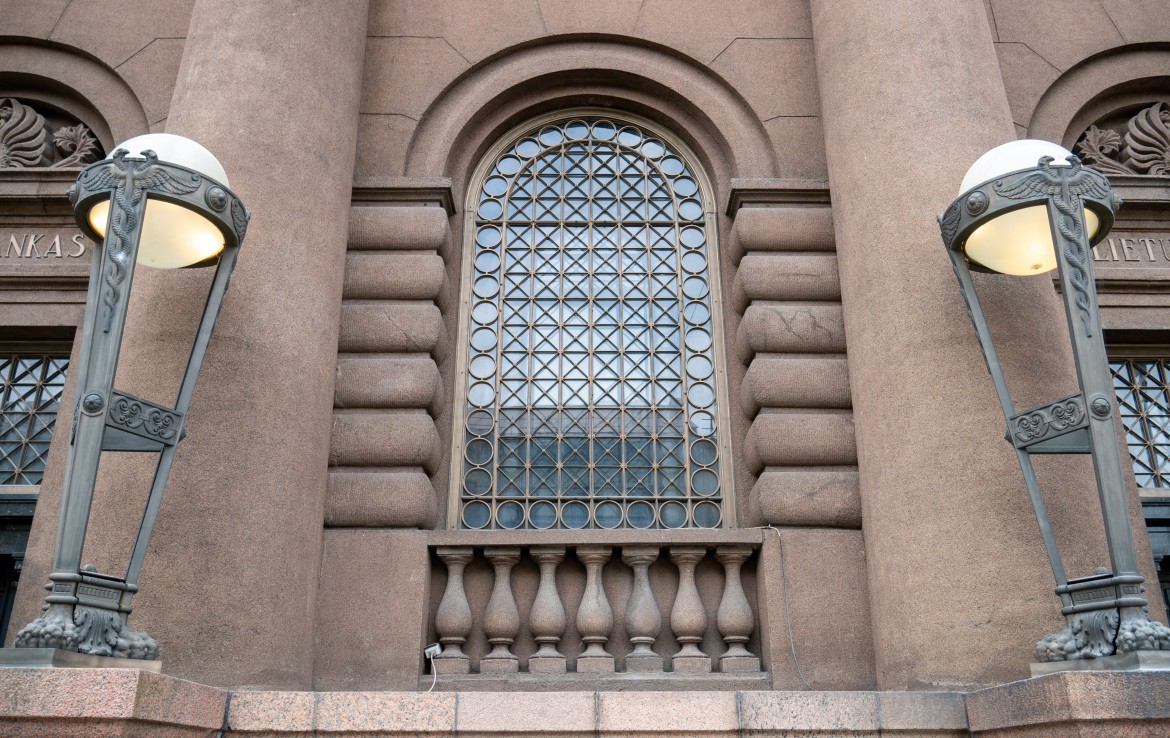 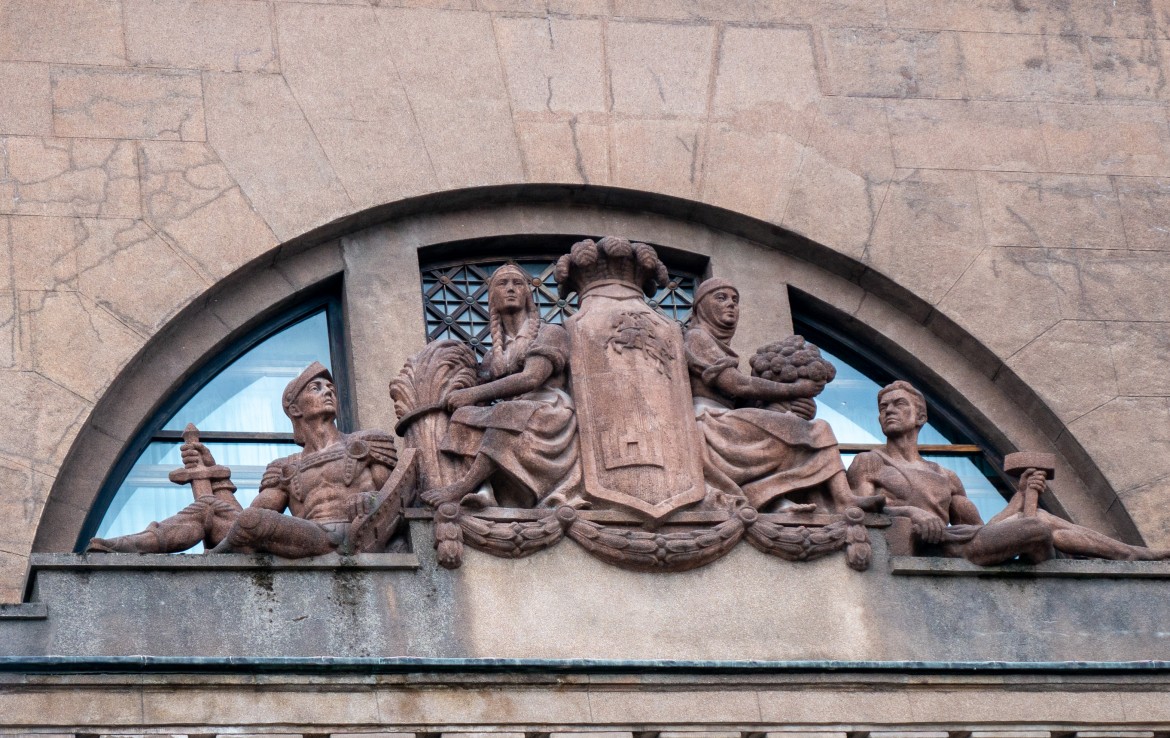 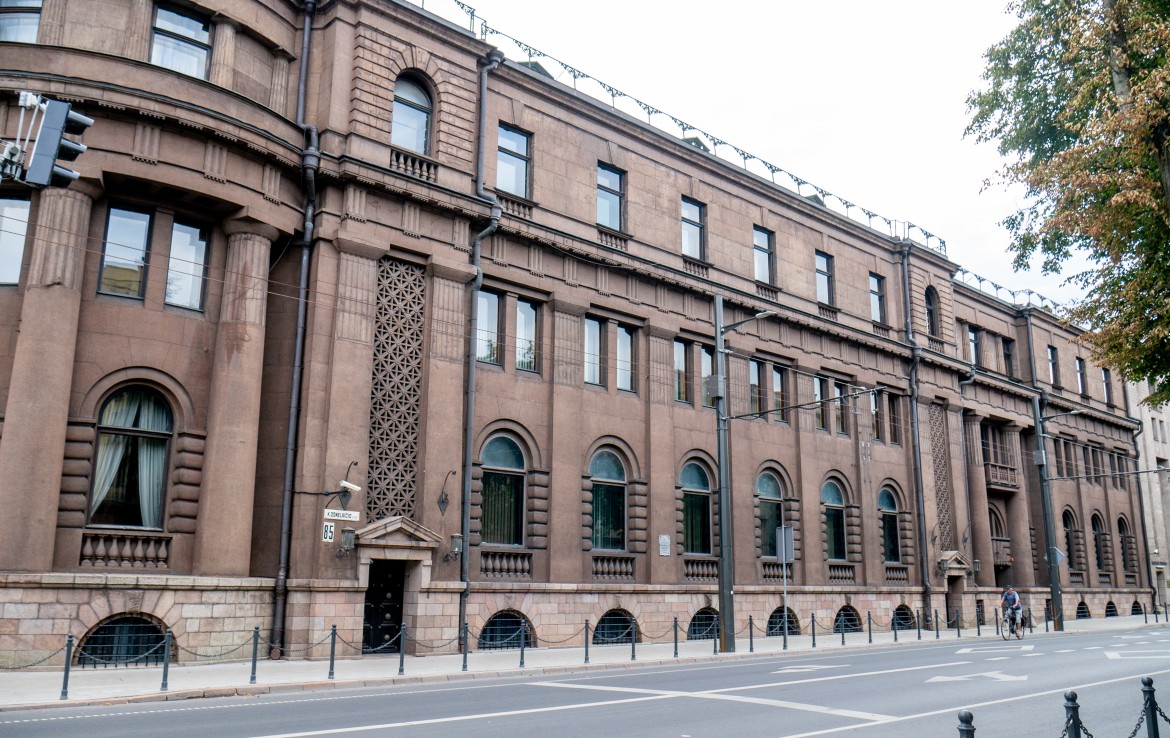