Church of the Discovery of the Holy Cross in Kudirkos Naumiestis

The present Baroque building of Kudirkos Naumiestis church was built in 1781-1783 by the Carmelite monks, who had come to this land more than one hundred years before. At that time, that house of prayer did not have any towers – they were under construction for many more years. Although it is thought that the verticals of the church were ultimately completed just in 1870, the documents survived provide evidence that Frederick William IV of Prussia, who travelled here in 1842, having seen the high towers of the Catholic temple in the town of Naumiestis, which at that time was called Vladislavovas, ordered to erect in the town of Širvinta nearby a church for the Lutherans that had to be no less impressive. In a decade the new church was in place. Since then, two towns, Kudirkos Naumiestis and Širvinta, the easternmost town of Germany, being separated by the river only, were competing in terms of spires. The church of Širvinta was left almost in ruins during the Second World War and later was completely destroyed alongside with the entire town. Meanwhile the church of Kudirkos Naumiestis, although damaged greatly, survived. It just lost the expressive Baroque helmets, which so far have remained not restored into the original appearance.

Twin four-tier towers dominate in the silhouette of the church, which are slightly drawn back in respect of the facade plane, as is characteristic of the late Baroque churches. Paired pilasters on the edges of all towers’ tiers serve as props for the profiled cornices, concave at the central planes and running across the central part of the façade; the cornices are doubled on the top of the bottom tier. In the tiers of the towers, identic rounded arches are set up, just in the bottom tier they are substituted for long niches, as if extending the portals; the upper tiers of the towers end with semi-round small pediments – in accordance with their form, cornices are curved. Three portals differ in height and pediment forms only – the curved pediment of the great portal breaks on the top and ends with a pentagonal part, meanwhile the side ones have a form of a curved trapezoid; relief compositions are integrated in all their tympanums. The side facades are flat, they are divided just by the rhythm of windows – the basement and the profiled cornices are accentuated here. The main volume of the basilica ends with the apse, the massive one, matching  the height and the volume, – the two-storey sacristy adjoining the presbytery part on both sides, where one of them ends with a small single-storey addition, in which the pilasters had been “borrowed” from the main facade solutions.

Through the narthex under a cross vault, one gets into the inside space of three naves, divided by a quite usual rhythm of pilasters joined with the arches – on the top, it ends with a broken profiled cornice; the pilasters in the side naves are doubled. The space of the present church is quite moderate, only the altars in the style of Neo-Baroque built in the 19th century together with the pulpit feature rich decoration. The main gate of the churchyard that was built later and matches the architecture of the church has curved attics joining the side parts of the gate. The attics as if supplement visually the broken pediment forms, nearly related to the main portal of the church. 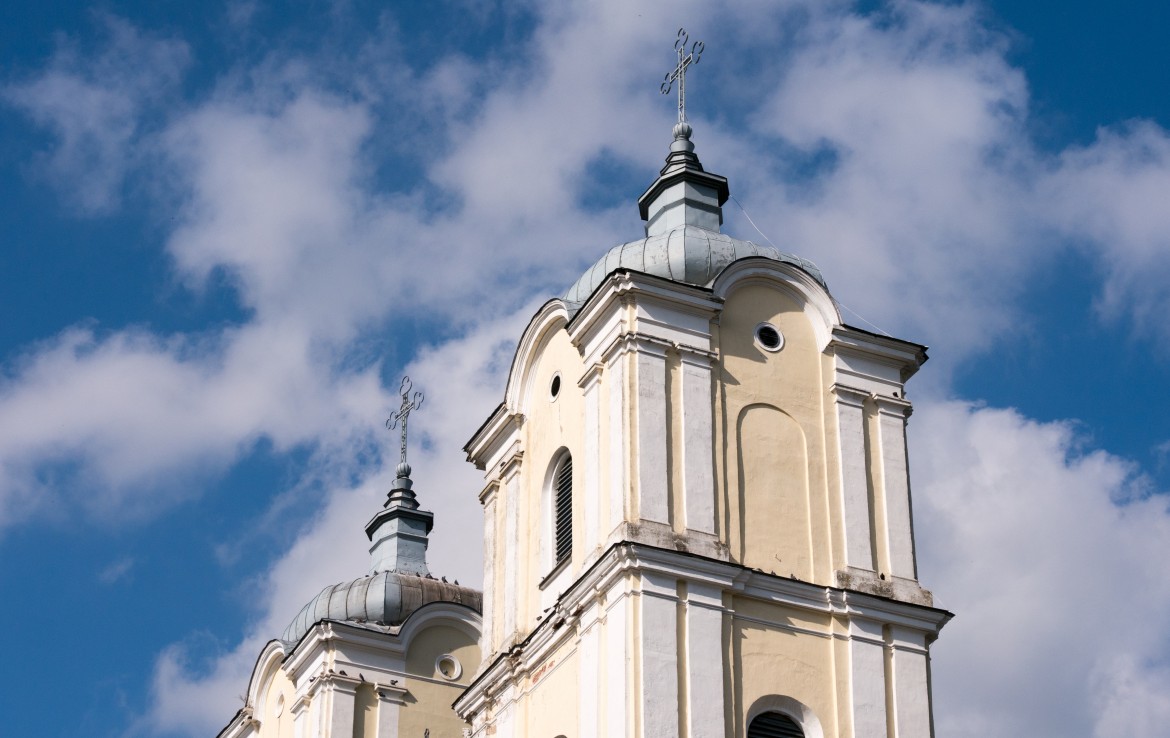 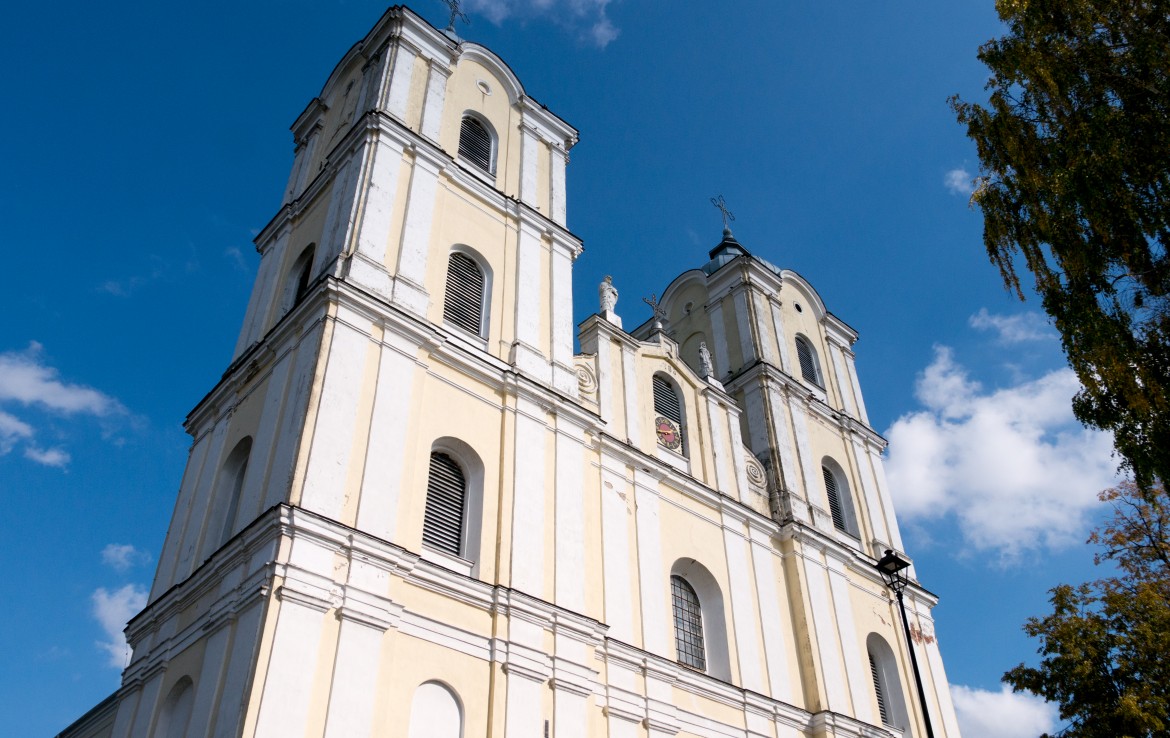 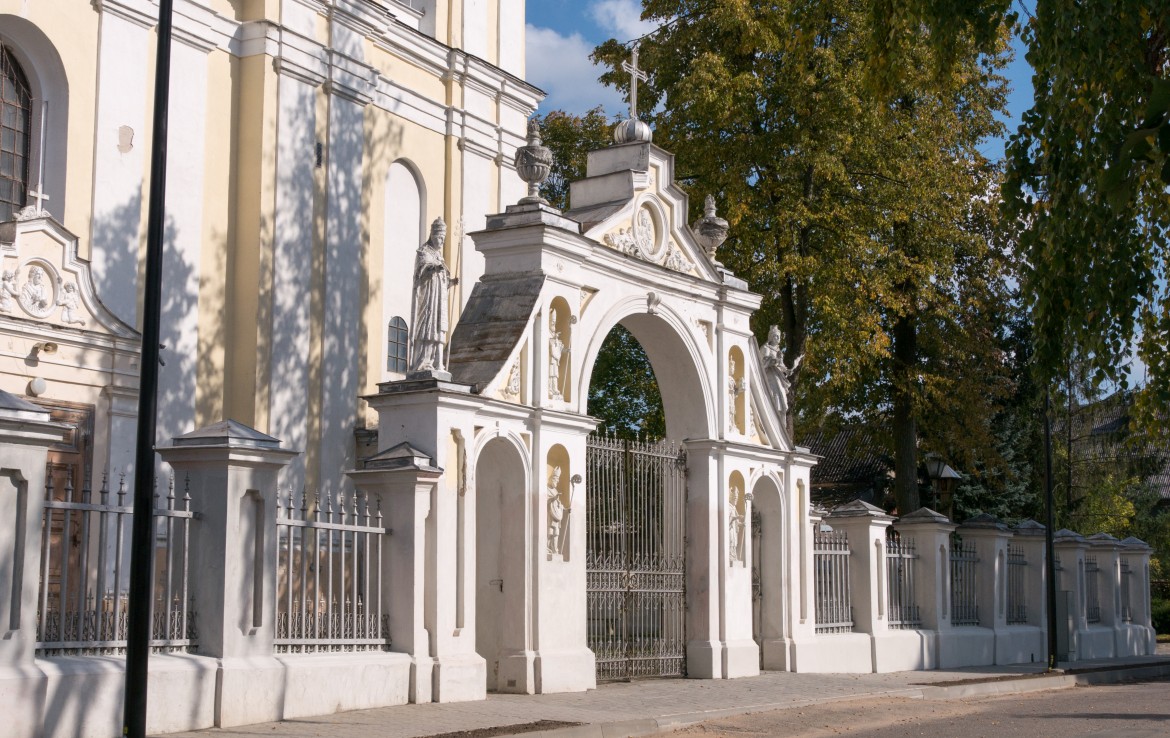 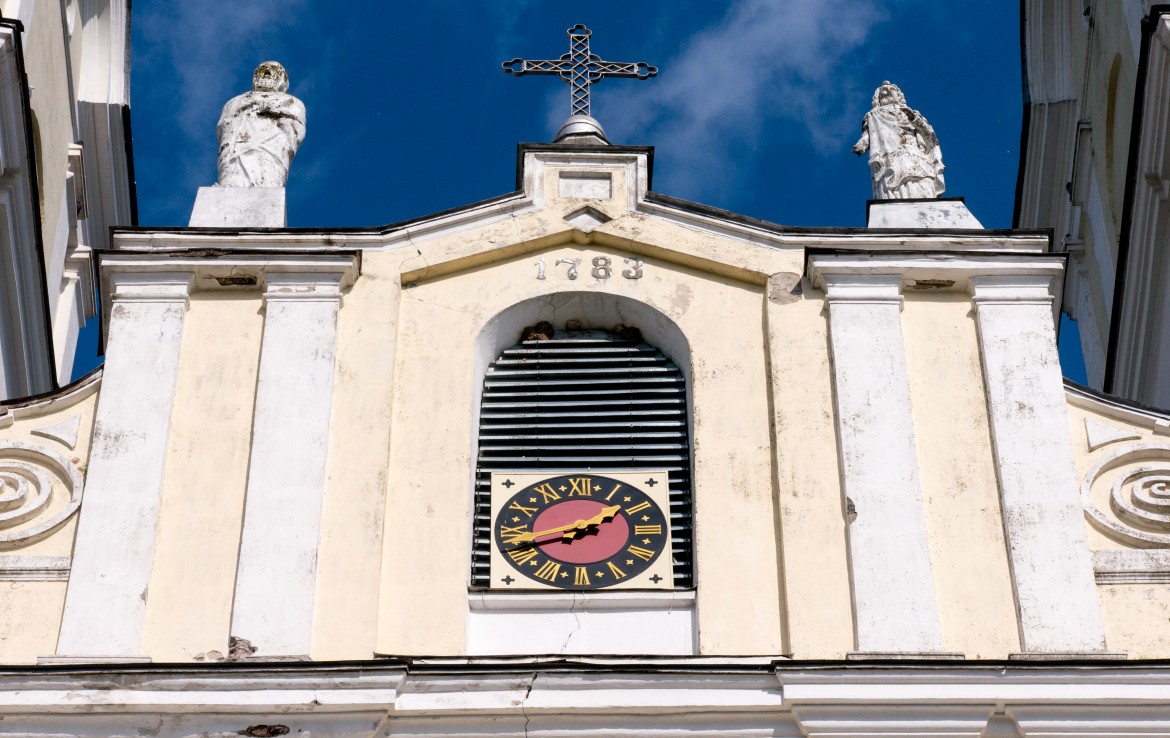 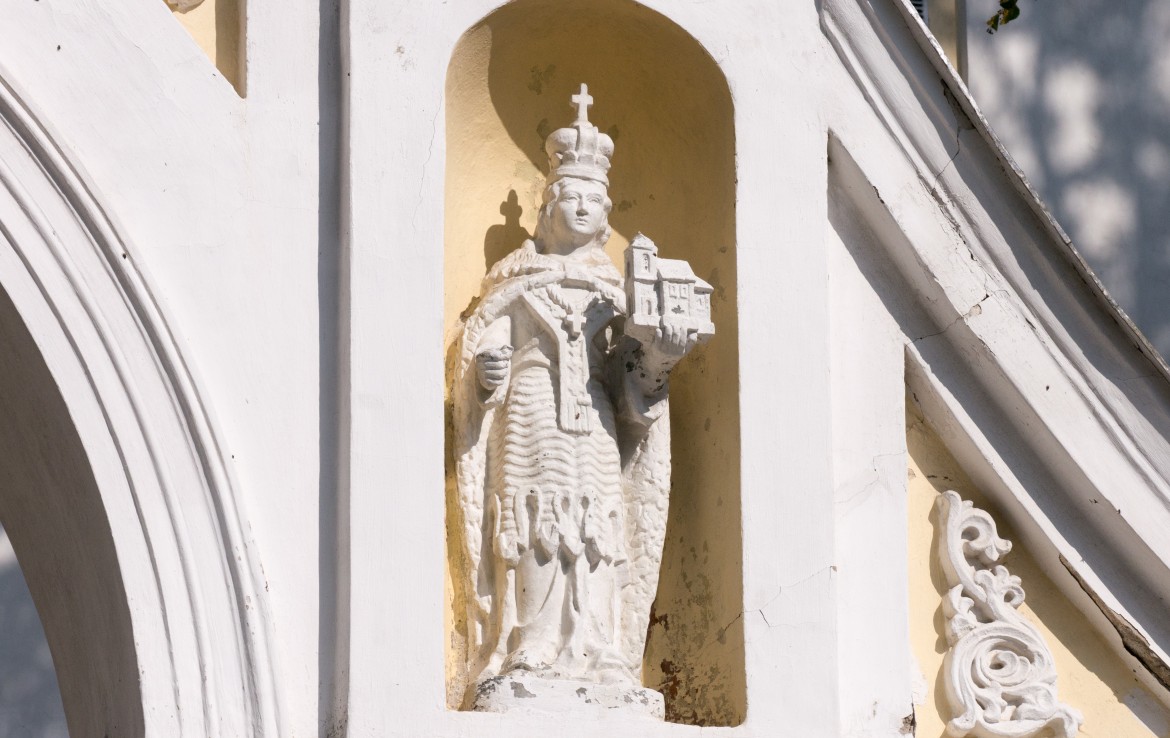 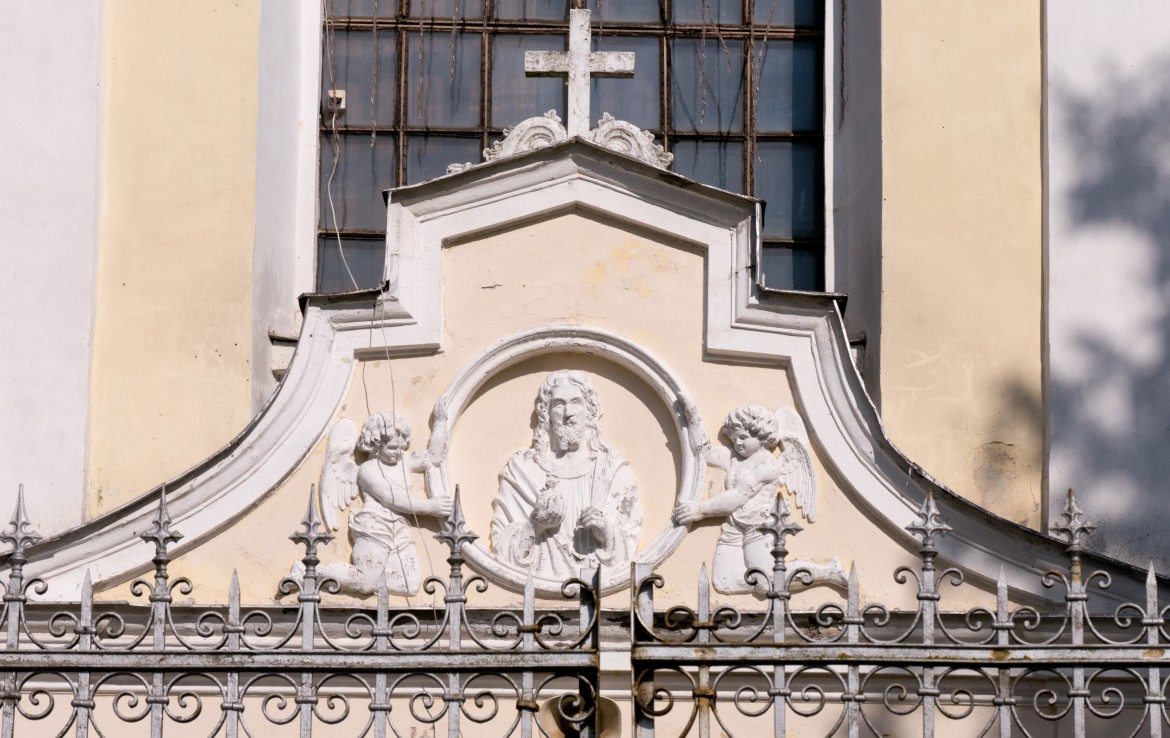 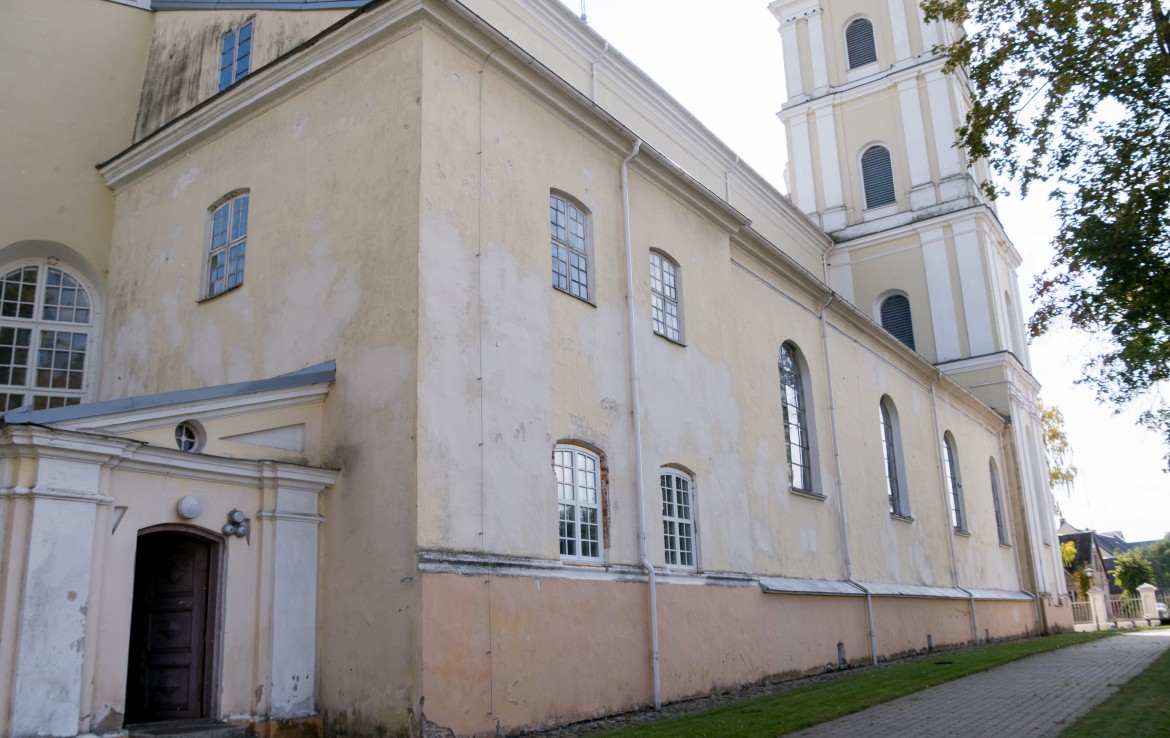 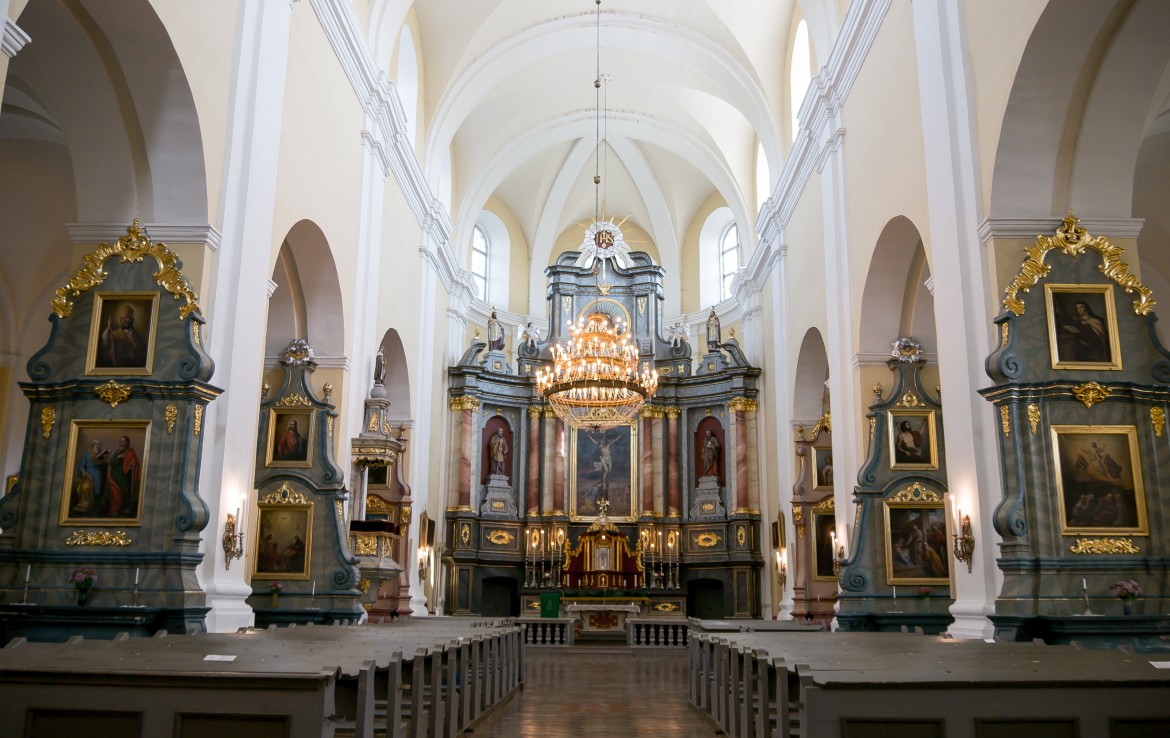 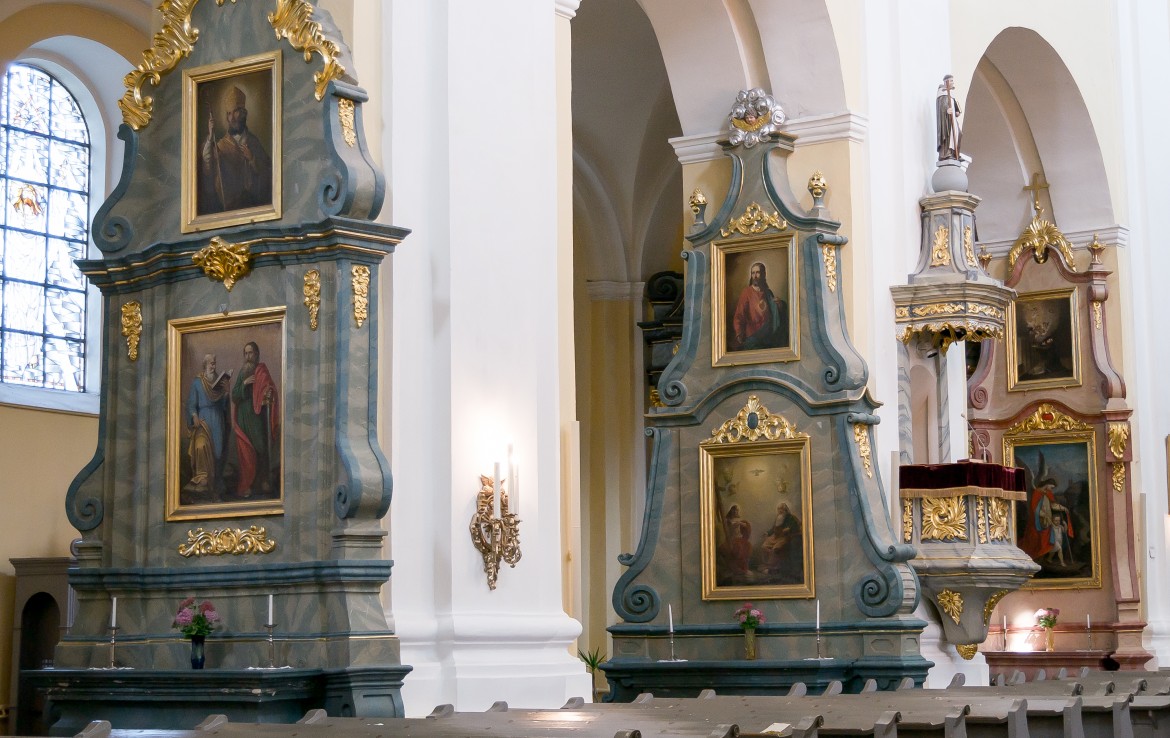 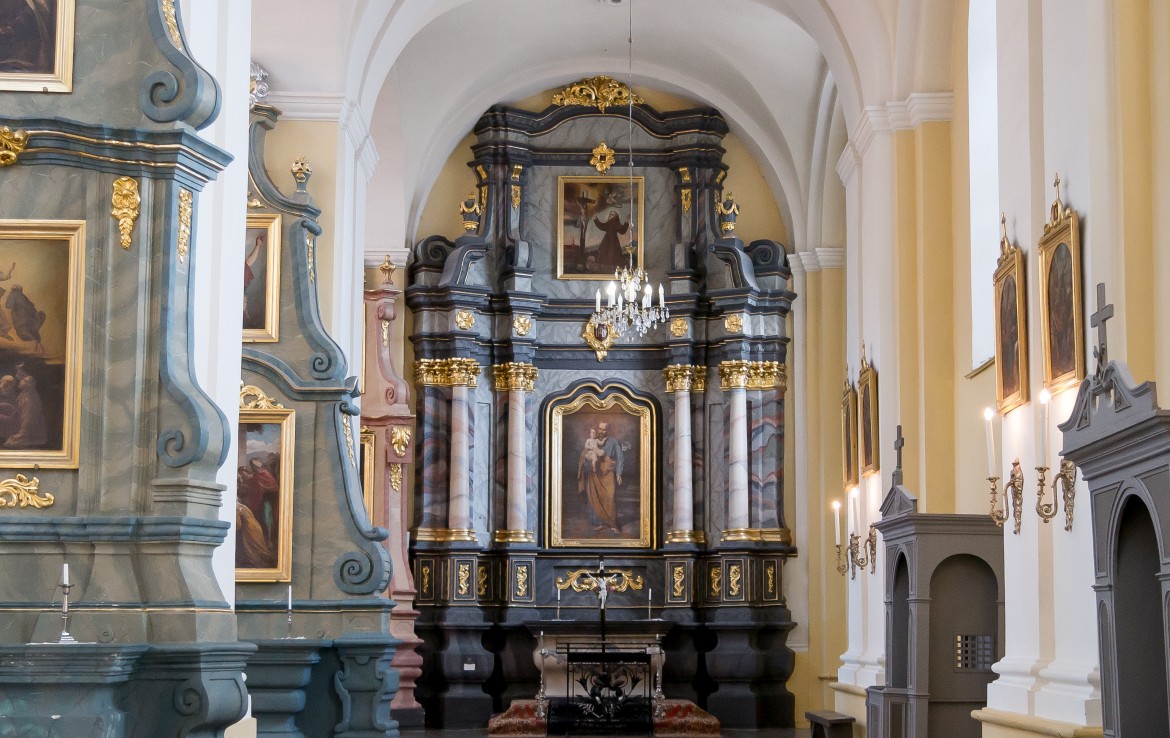 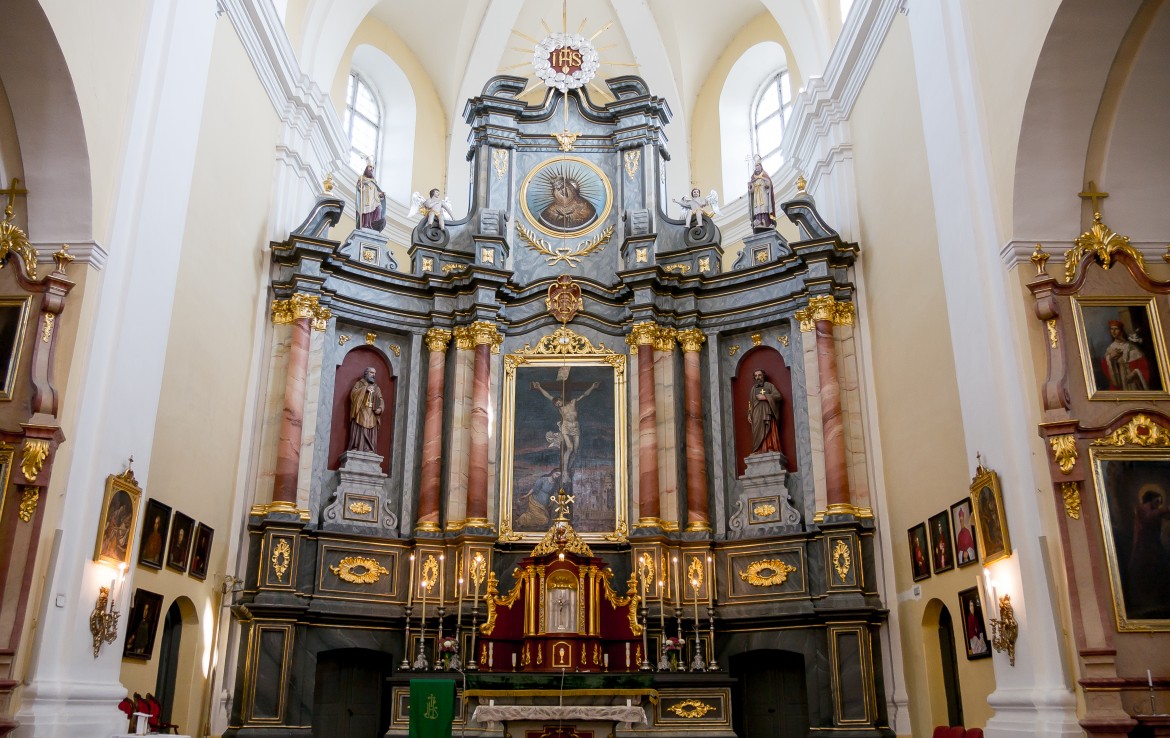 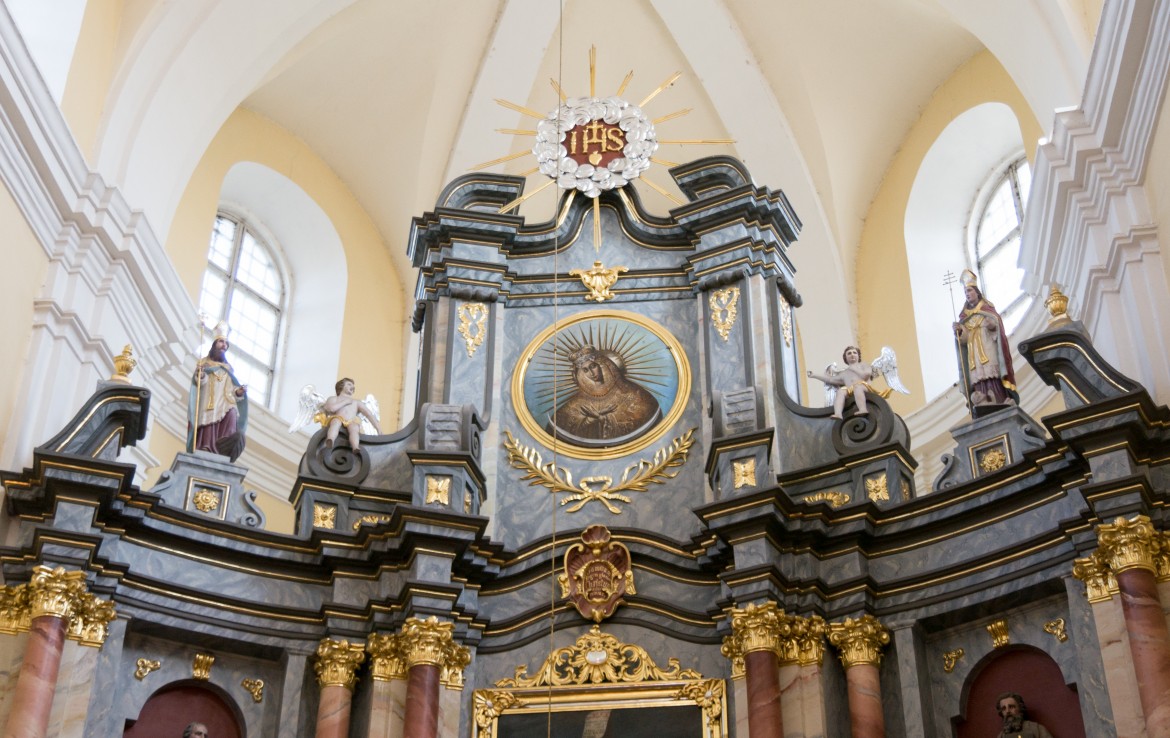 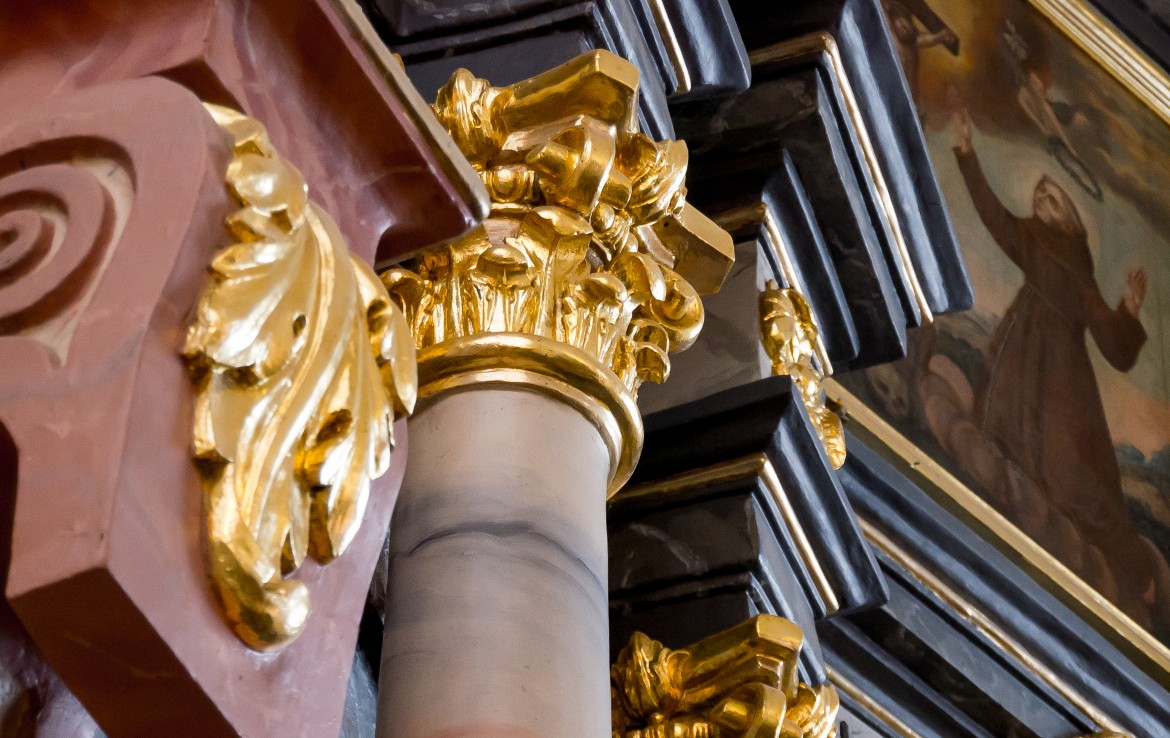 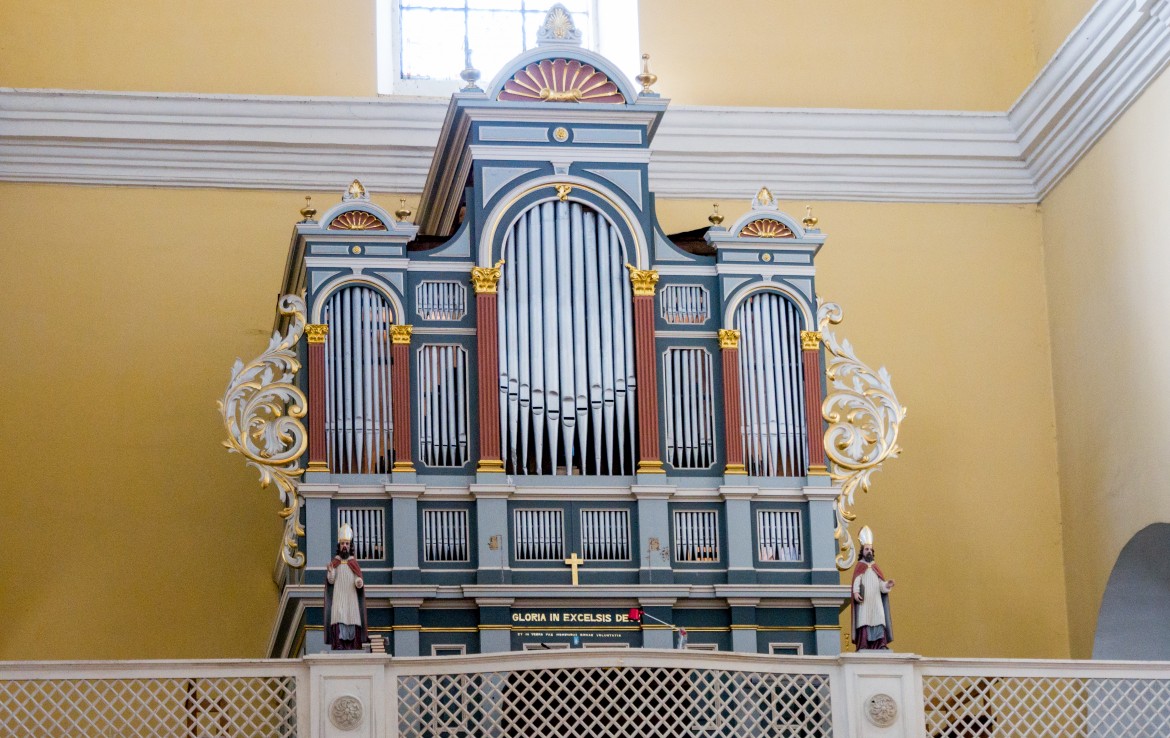 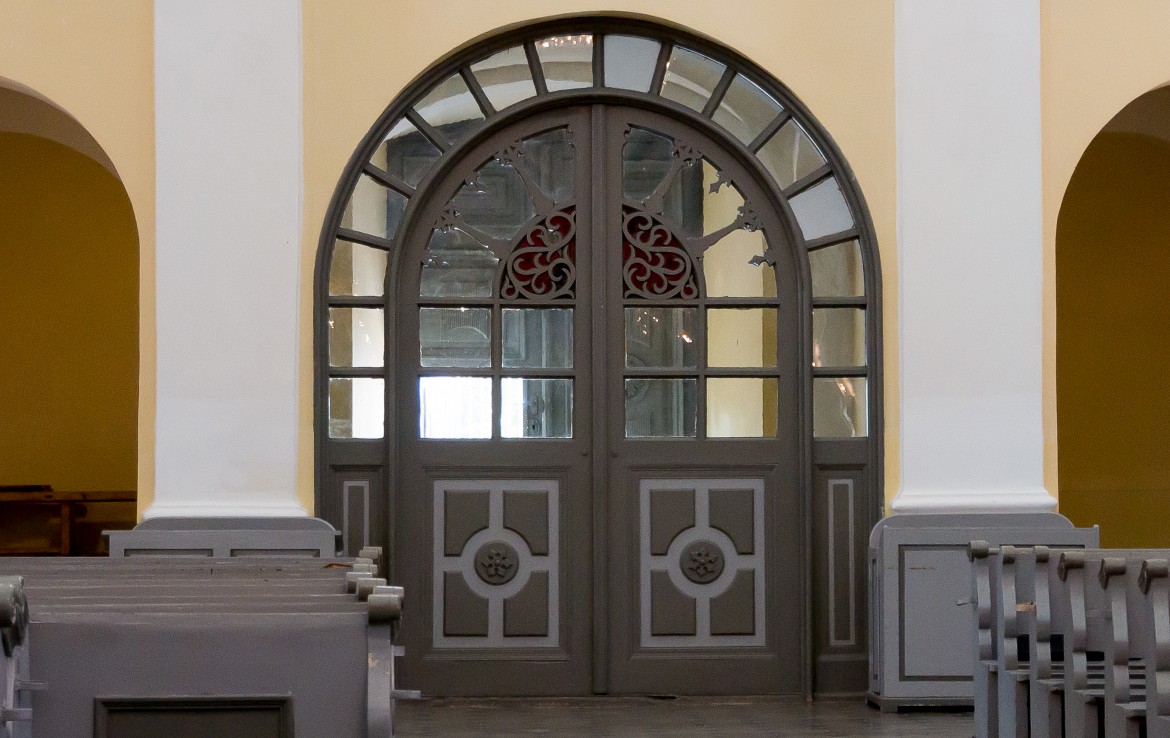 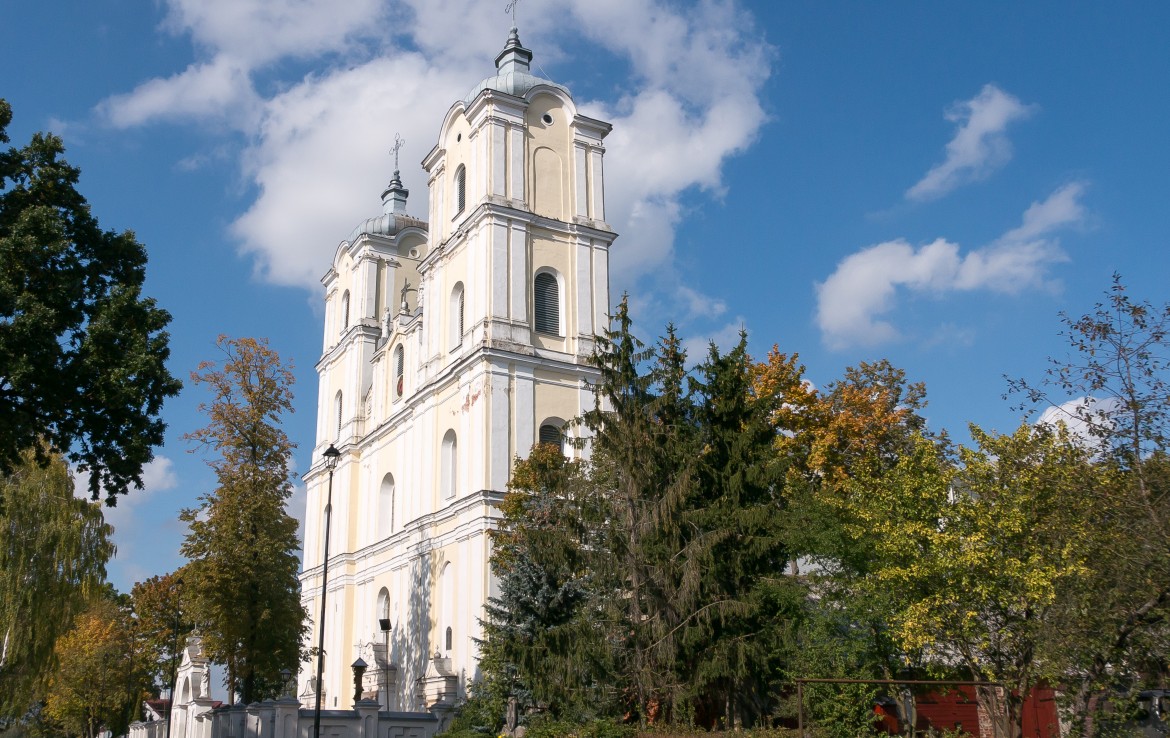