For centuries merchants and travellers coming to Kaunas from Užnemunė region both by boat as well as by horse were greeted by a lively Gothic tower decorating the shore of the pier. Although the exact date of construction is still disputed by historians, it is believed that the Church of the Assumption of the Blessed Virgin Mary is the oldest surviving building in the city, not including the castle. At the beginning of the fifteenth century Vytautas the Great initiated many churches in Panemunė, among them the church of Kaunas, which eventually became one of the most important symbols of the city. The sanctum was originally built for the needs of the monks of the Franciscan Order, whose monastery was established nearby. The monastery and the church of the Franciscans were closed in 1845, and due to the Russification taking place at that time, the sanctum was soon turned into the Orthodox Church. The church was reassigned to the needs of the Catholic Church only after the declaration of Lithuania’s Independence in 1919. According to historians, the name of Vytautas became popular during the interwar period at the initiative of Vaižgantas. At that time, one of the main national narratives was the romanticising of the Duchy of Lithuania.

The tower was built a little bit later than the main volume of the church – it is rather common in the construction of the churches of that time. The multi-section tower begins with the quadrilateral part with the portal of the main entrance, turning into increasingly narrowing octagonal sections; the tower is enlivened with the division of windows and niches as well as width differences. It is believed that the volume of the church is almost unchanged, as also remained the rhythm of the lateral façades, constructed of the pointed-arched windows, niches and buttresses. The only Gothic three-nave hall church of Latin cross in Lithuania was reconstructed many times; therefore, the height of the niches as well as the interior design has changed, and the portals of the lateral entrances disappeared. It is believed that the stepped pediments of toothed silhouette of the lateral chapels also looked much more modest. From the side of Nemunas we can see a fragment of the change of the church façade during the Provoslav period – the brick wall painted with brown paint.

The main area of the sanctum is divided by graceful octagonal pillars, and the presbytery, which is lower than the main nave though wider, just as the lateral chapels is separated from it by pointed arches. One of the most impressive architectural elements of the church is restored stellar vaults of the presbytery which are ones of the few remaining in the city, and which were common in the Franciscans sanctums; the original vault has also remained in the chapel, situated from the side of Nemunas. The walls of the church in the main part reach up to one and a half meters of width – from the outside we can see the décor typical of the brick Gothic of these regions – patterns formed of burnt dark bricks. The Gothic spire of the tower, covered in 1982, provided the church with gracefulness. This solution is viewed today as somewhat controversial: it is believed that the original upper part of the tower was destroyed in the middle of the 17th century, and its reconstruction was based on the engraving by Tomasz Makowski, made in 1600. 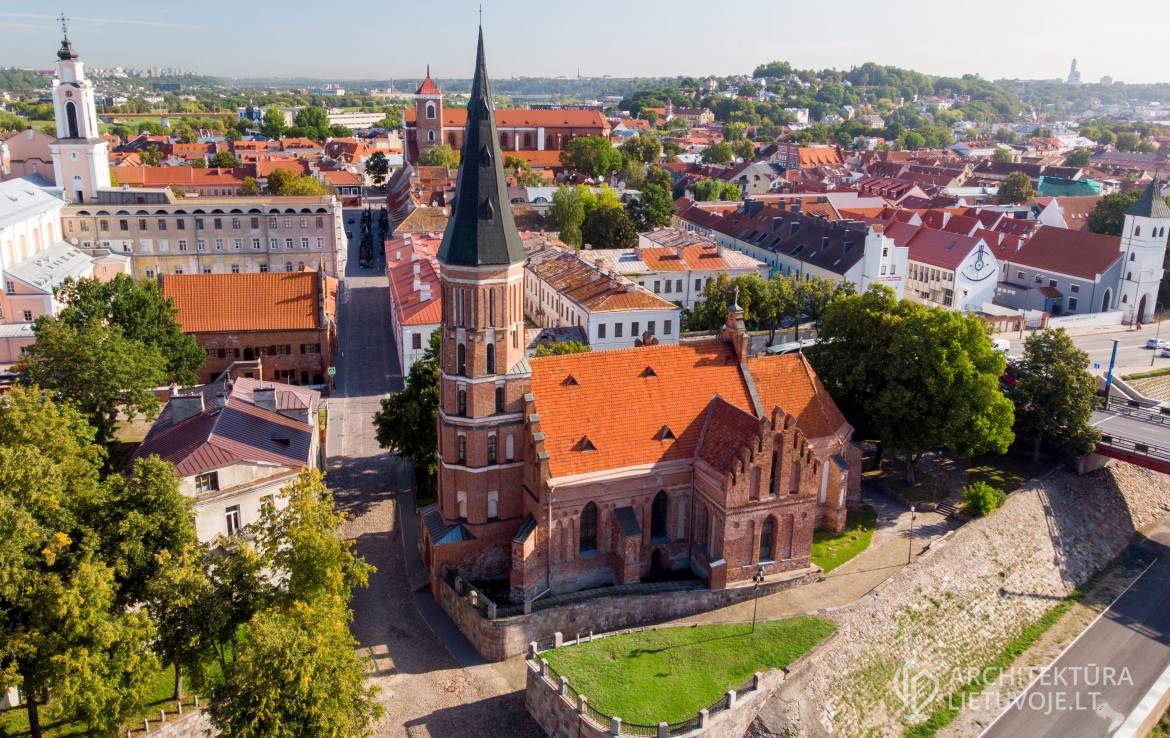 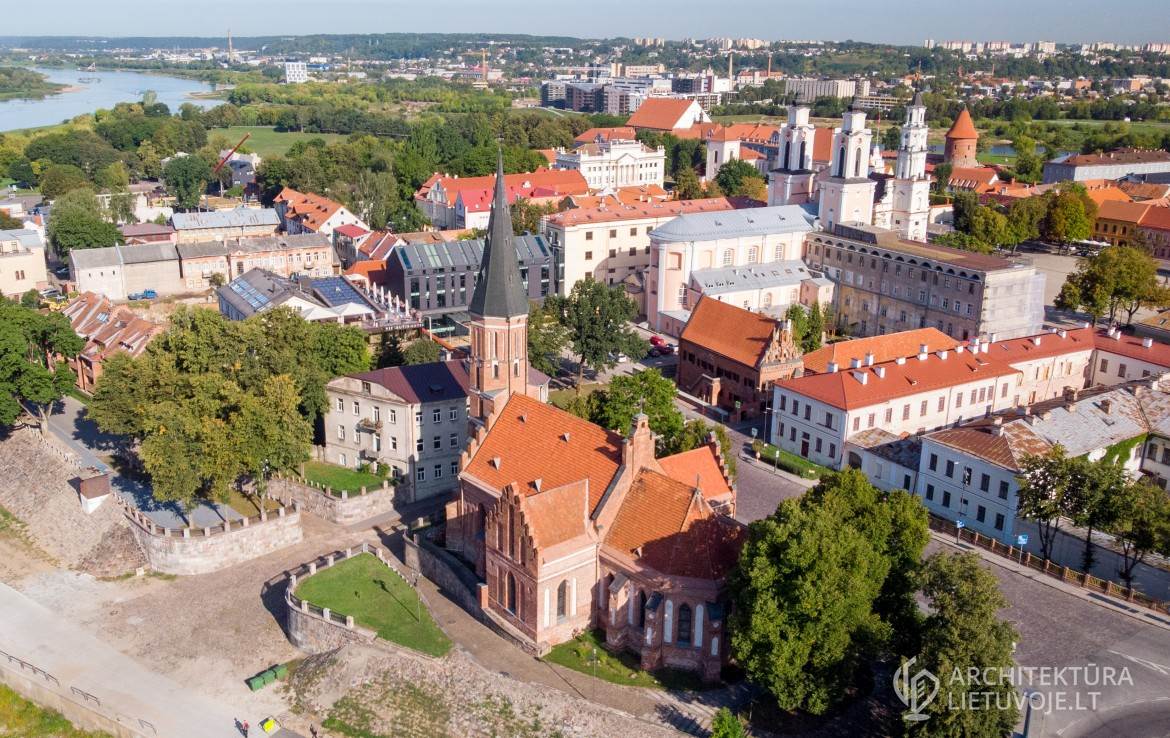 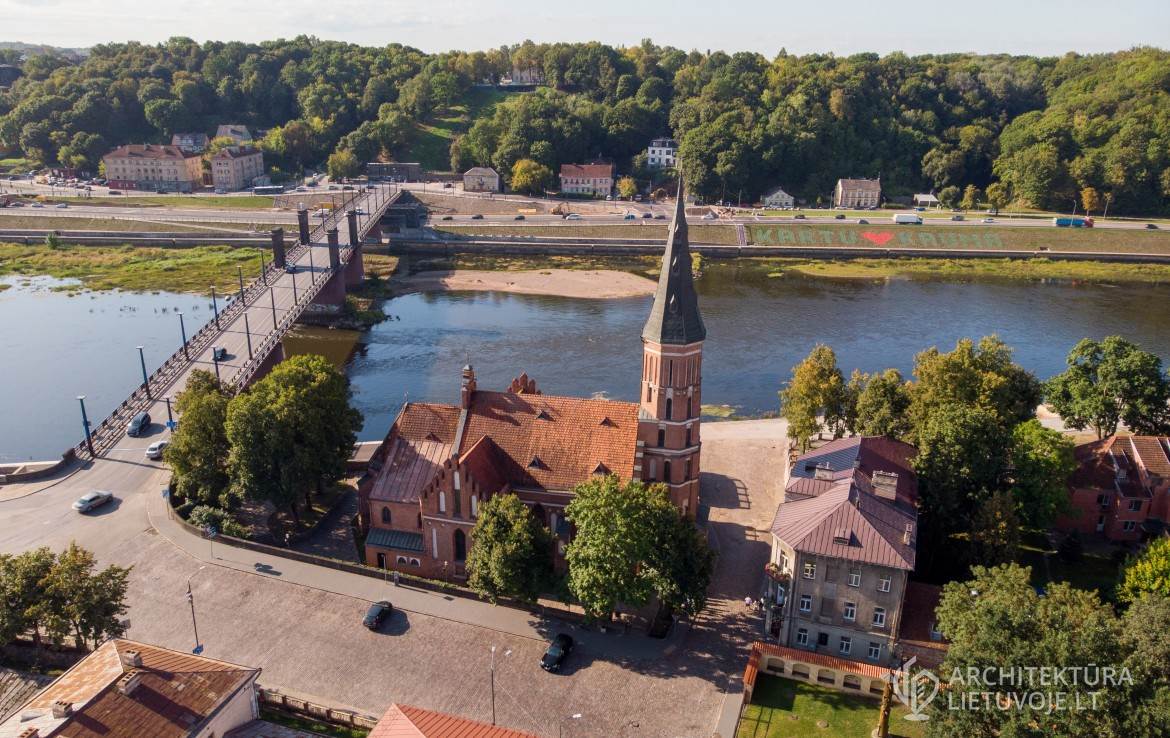 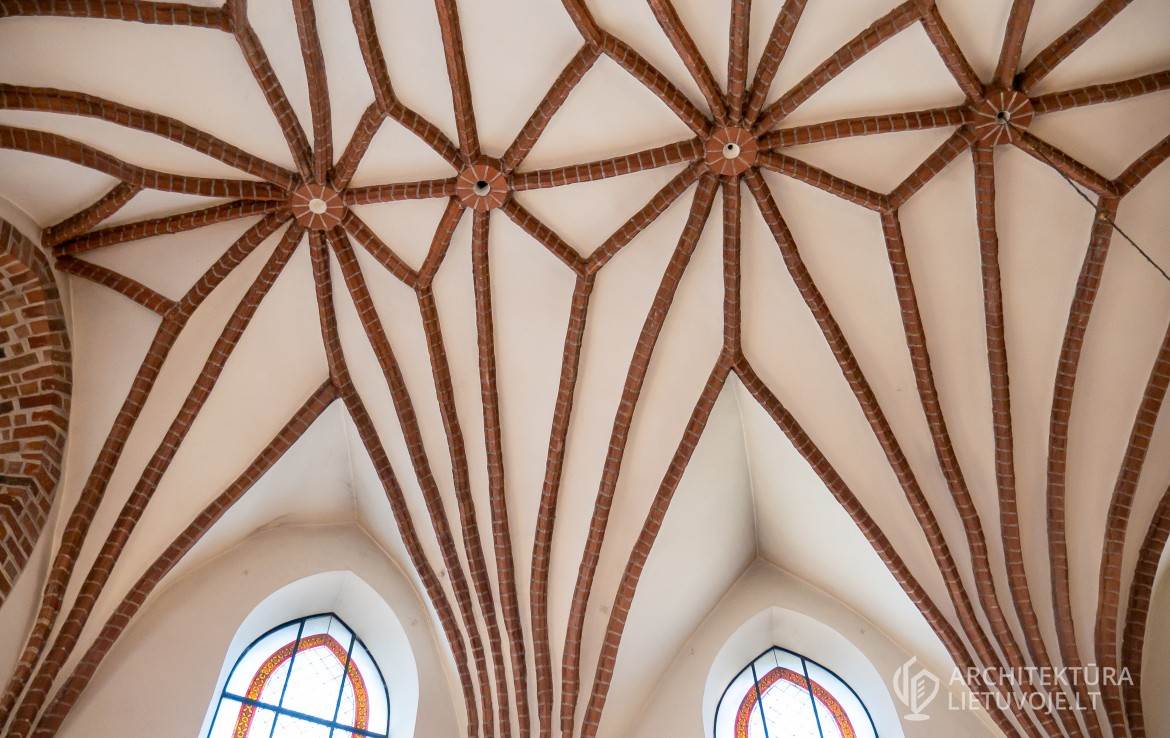 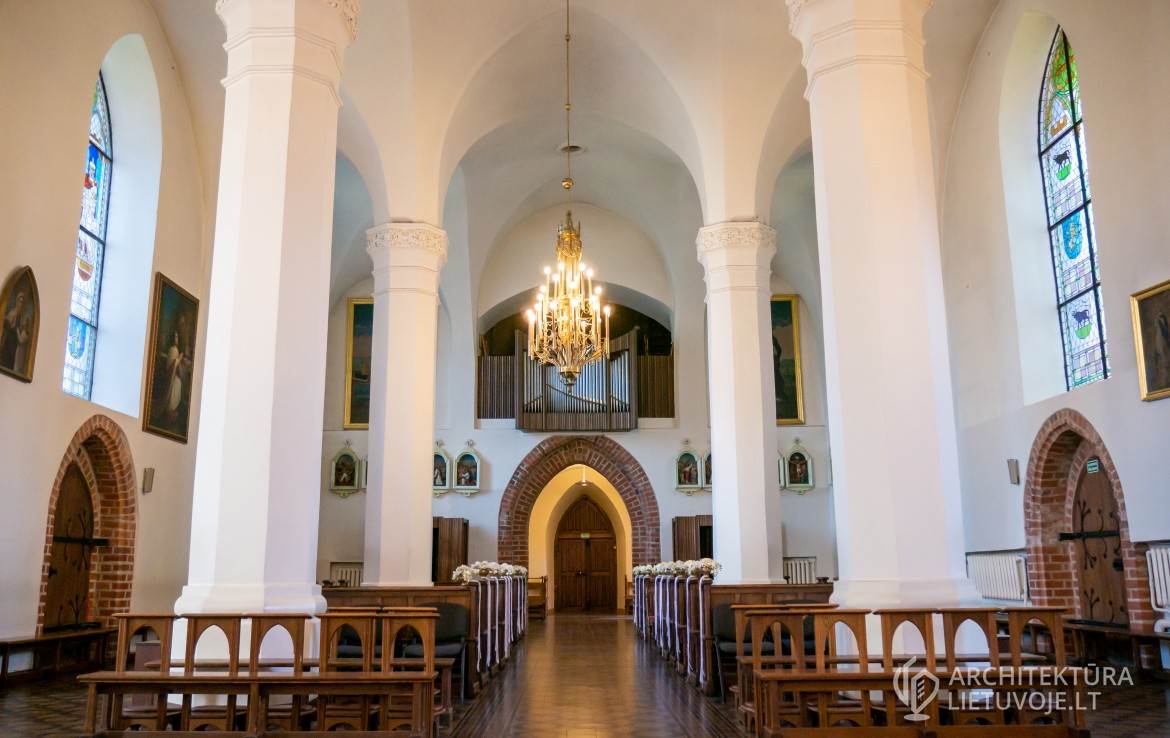 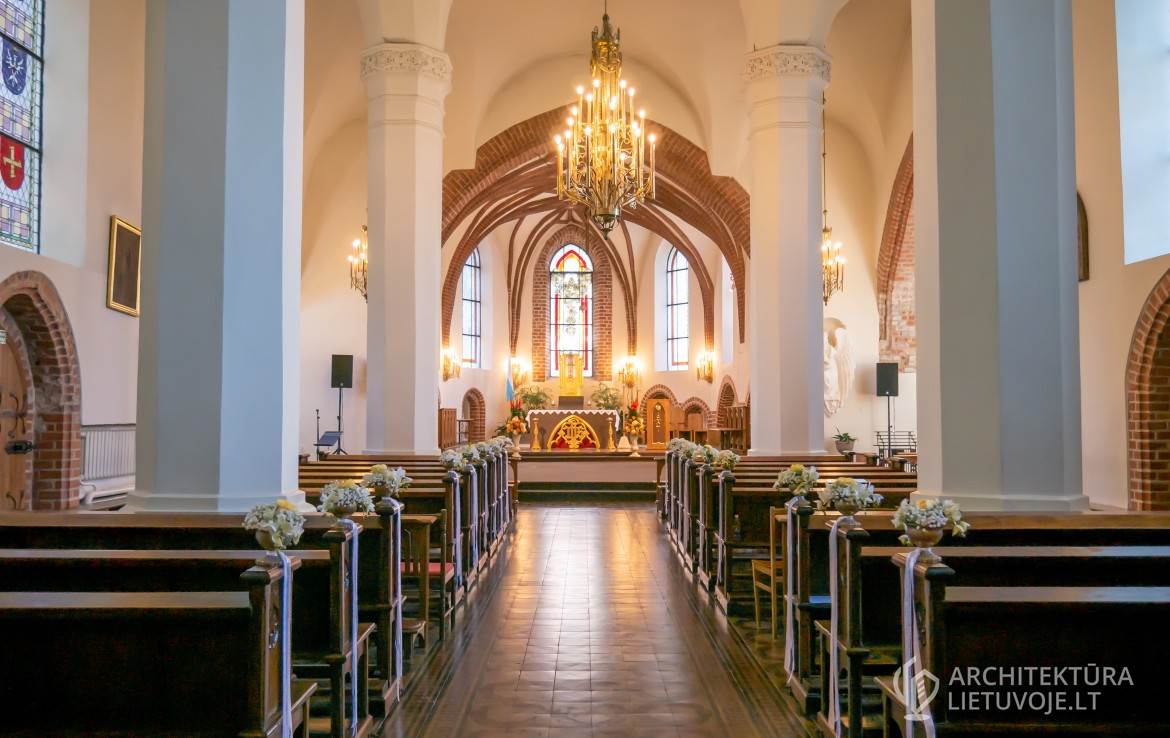 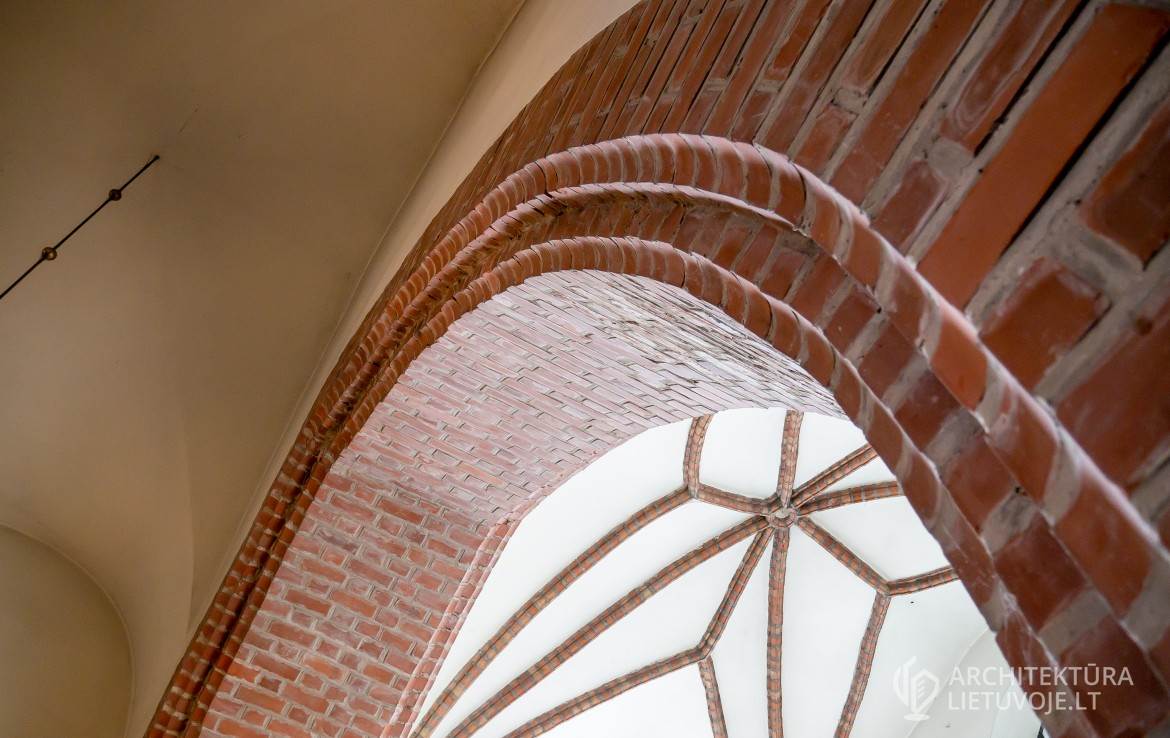 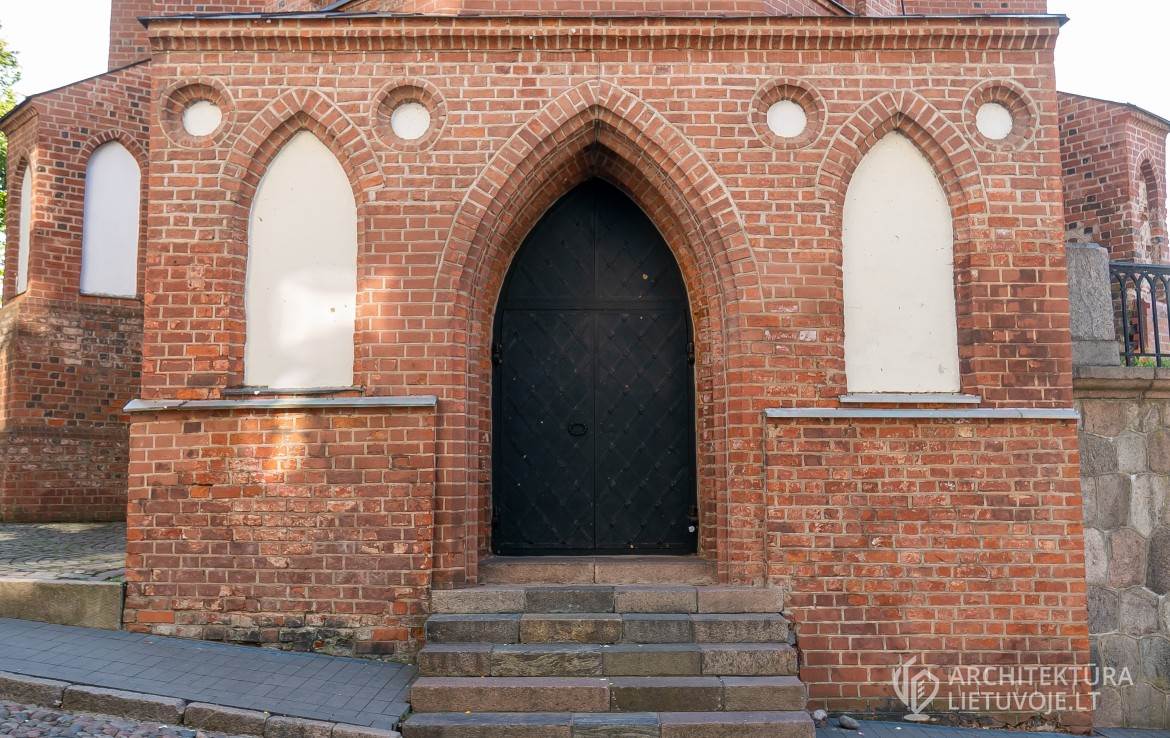 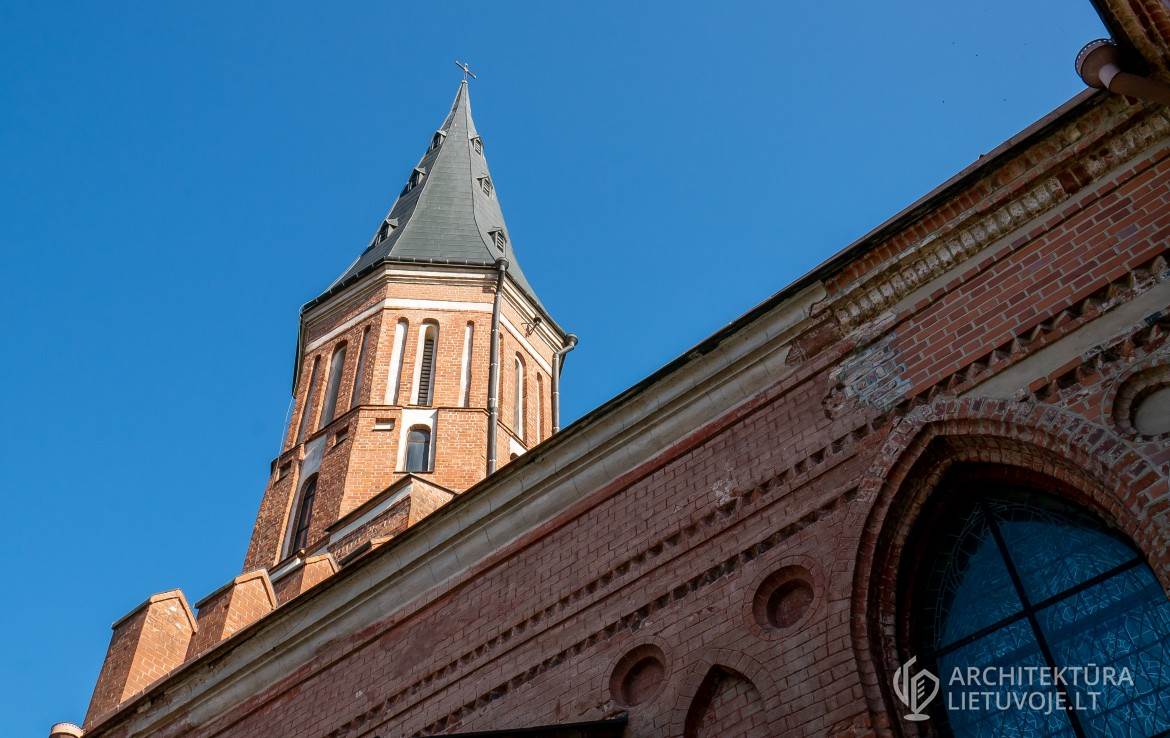 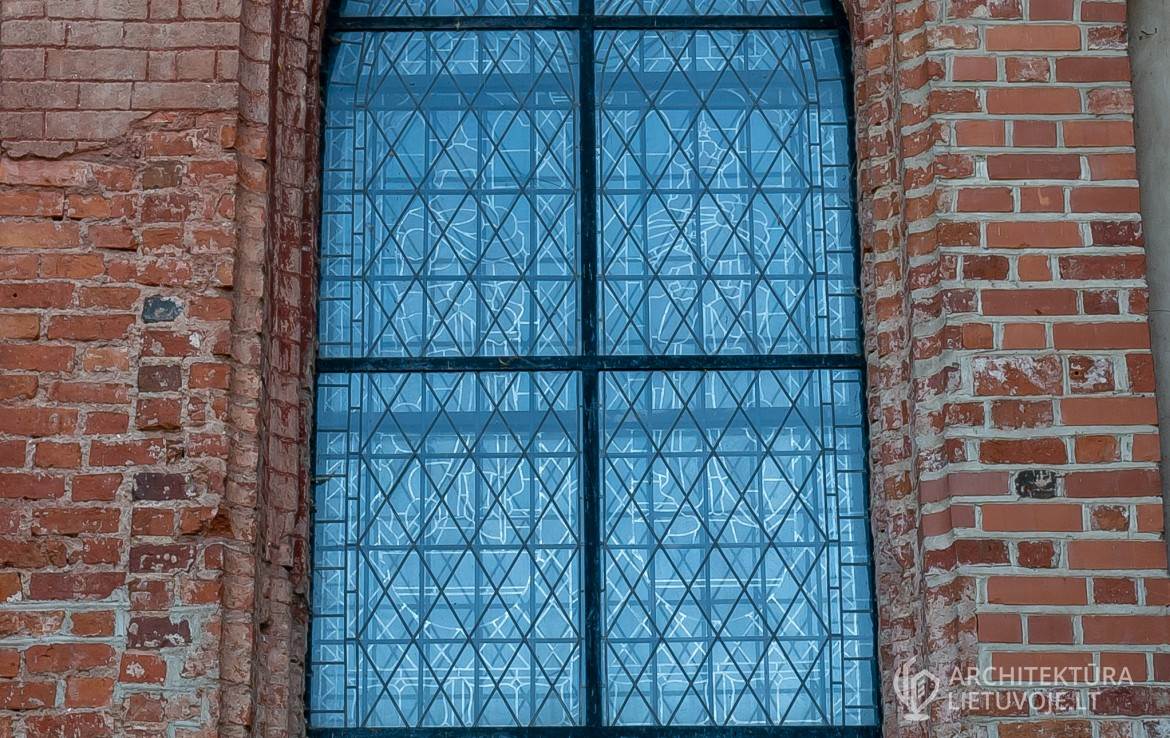 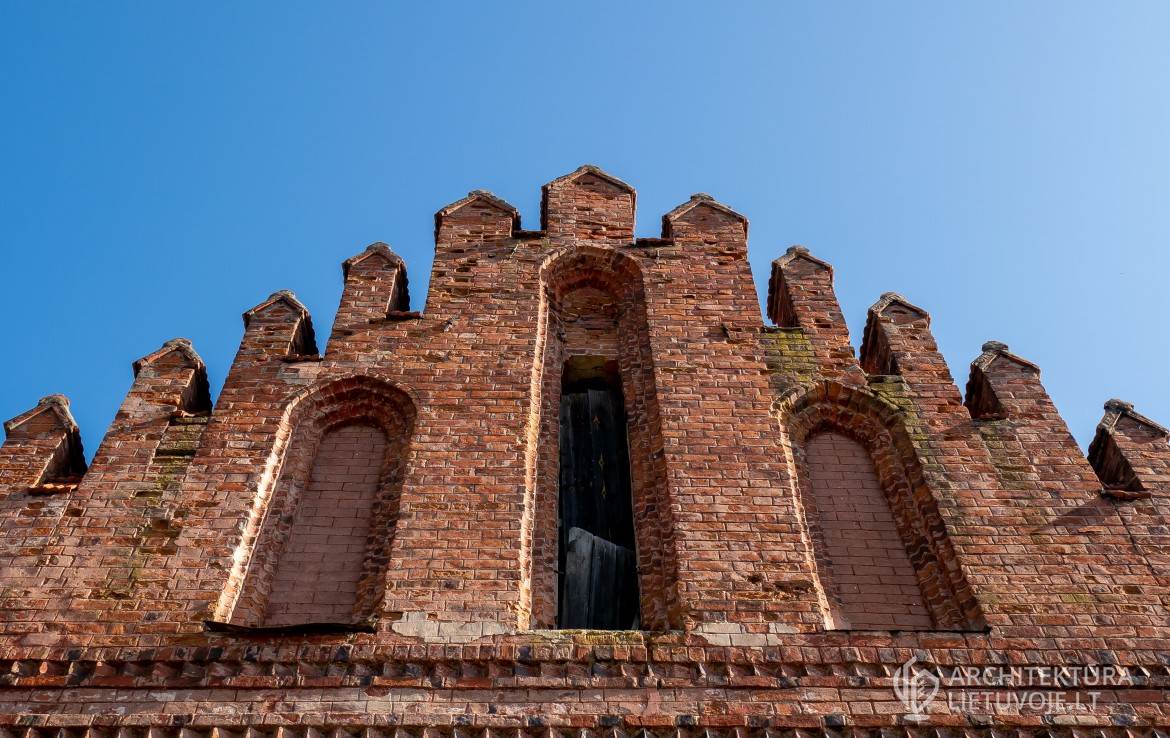 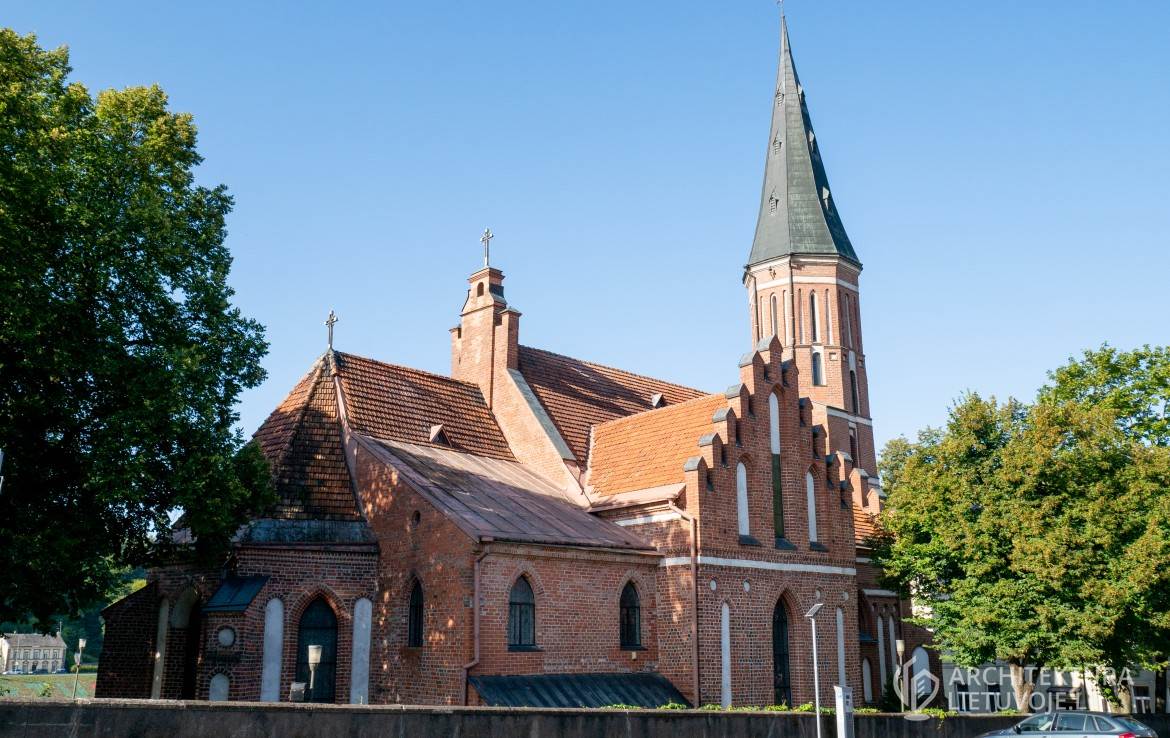 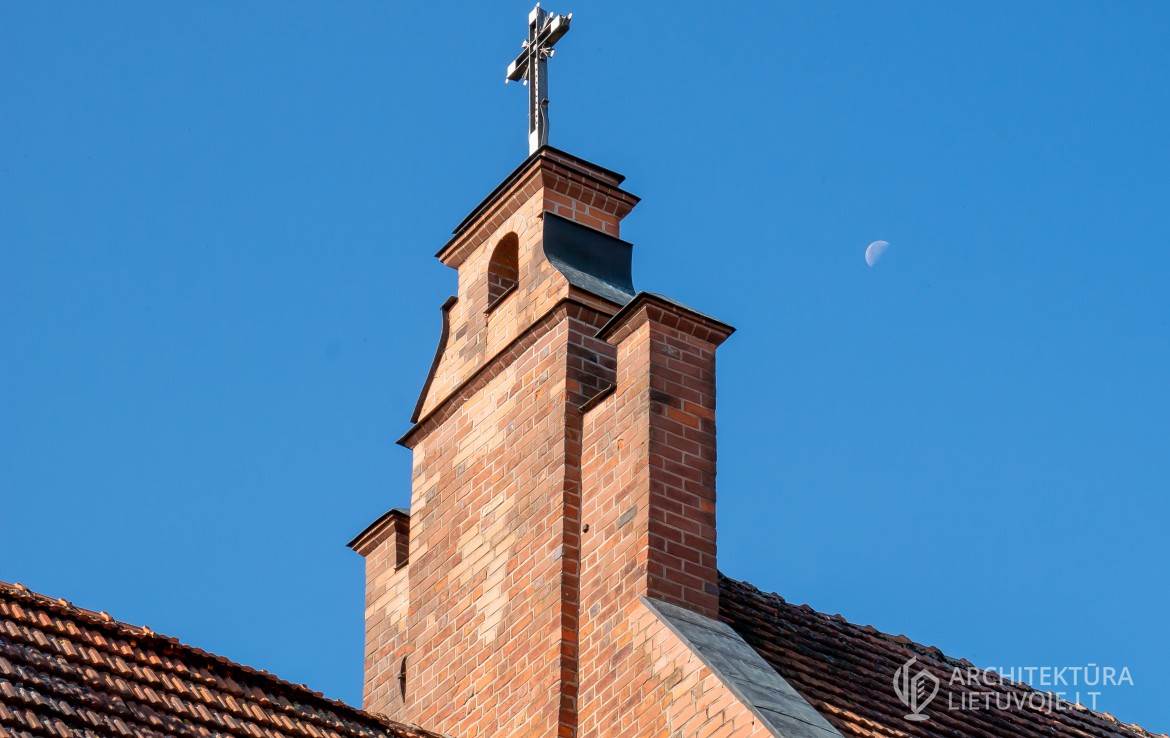 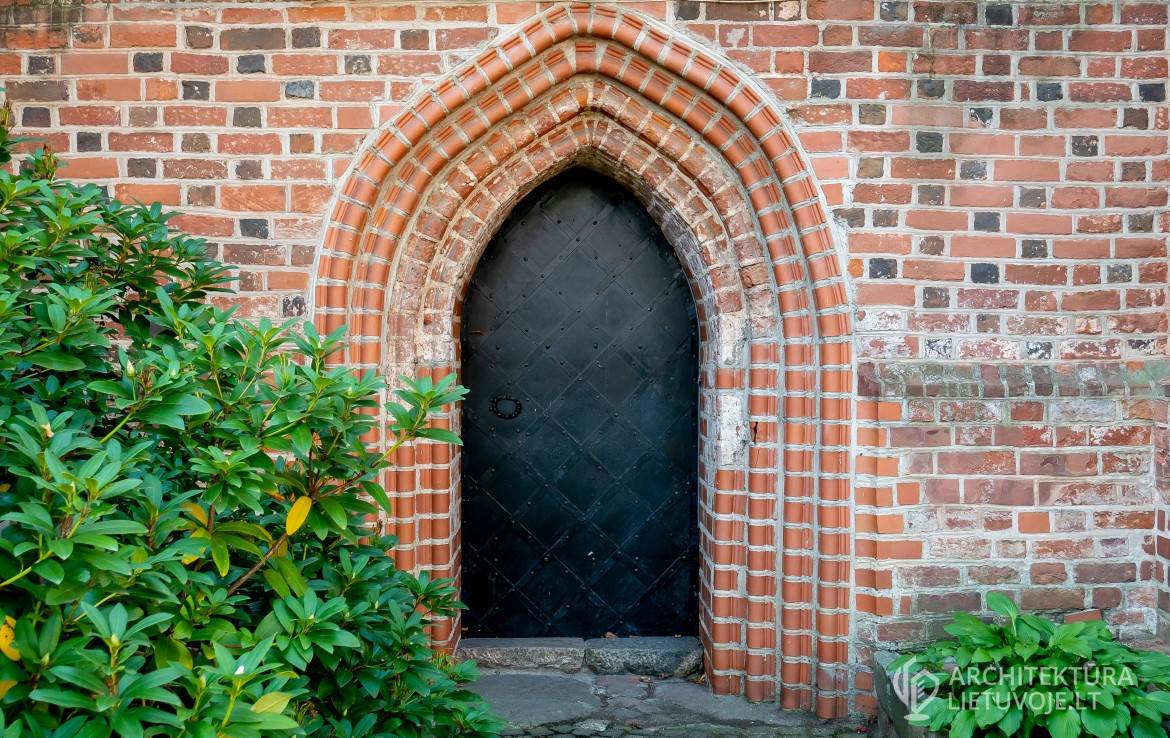 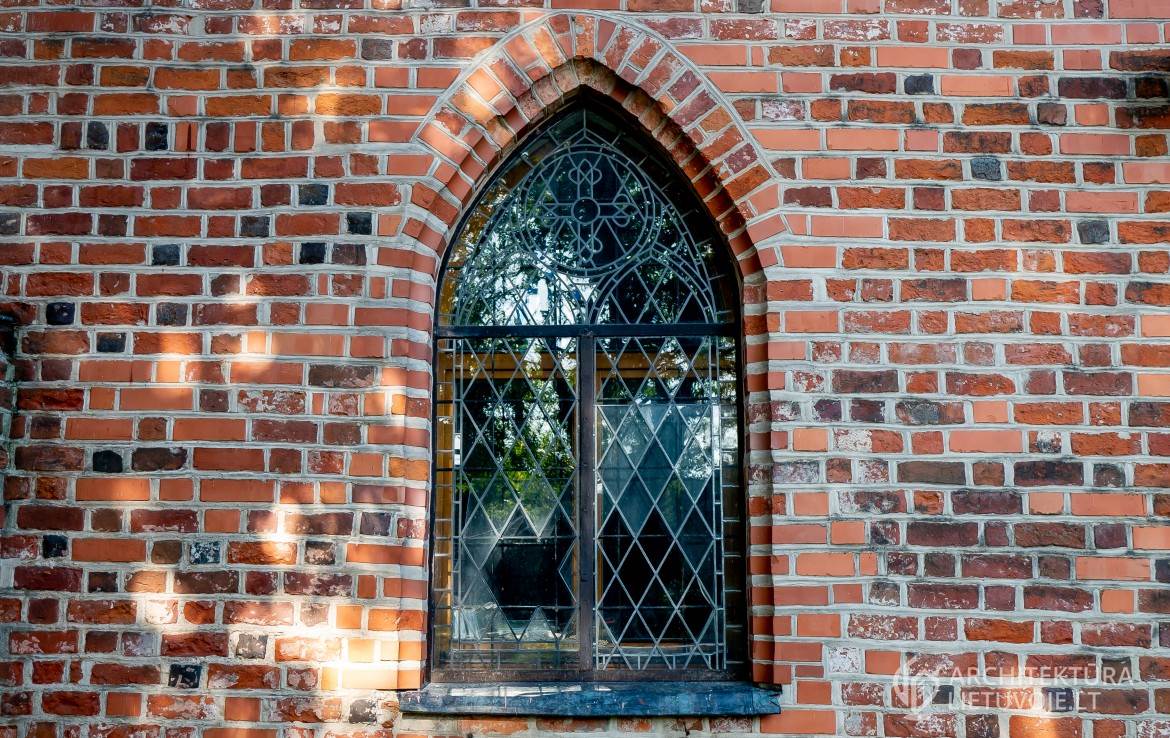 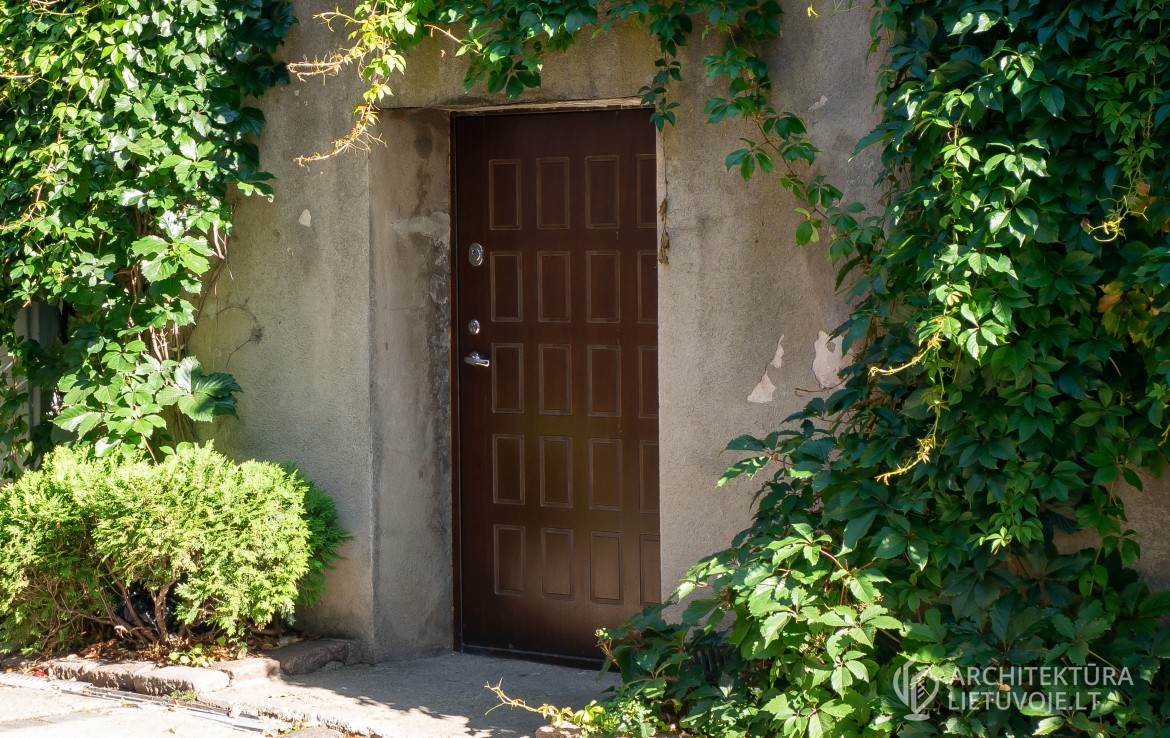