From a small theatre of the centre of the Russian Empire Governorate to one of the most important buildings of the interwar Republic of Lithuania. Such changes marked the first fifty years of the current Kaunas State Musical Theatre. According to the project of Justinas Golinevičius, who was the architect of the governorate and an author of many buildings back then, Kaunas theatre palace was built in the city garden in 1892. The building acquired its current appearance in the independent Lithuania, when it received a State Theatre status. It has formed through two stages: according to the reconstruction designed by Mykolas Sungaila and Vladimiras Dubeneckis in 1922-1925 and according to the second reconstruction carried out by Vytautas Landsnergis-Žemkalnis in 1930. During the interwar period, the building has witnessed not only the rapid evolution of the Lithuanian theatre, but was also used for the performances of the most important foreign artists and also carried out a representative function – a large part of the most important events of the city and the whole state took place here. For example, in 1918, the first meeting of the City Council took place, and in 1920, the Constituent Assembly of Lithuania held the first formal sitting.  It is symbolic that the existence of the Lithuania of that time has partially ended here as well – in 1940, the so called People’s Parliament adopted a resolution regarding the request of Lithuania to be integrated into the USSR.

We do not see much from the first stage of the building’s existence: part of the forms of the former volume and some window niches have remained in the front façade. An important remaining feature – the curved walls joining the planes of the façades. The modest neo-Baroque elements were replaced with much more impressive ones during the reconstruction of the M. Songaila and V. Dubeneckis: this is especially clear in the spectacular pediment of the building. Neo-Baroque played a certain role in the search for the so called “national” architecture style: having in mind the Vilnius Baroque, attempts were made to apply its forms in new constructions of Kaunas. During this reconstruction, the building gained its current representative features: the entrance was highlighted with a porch, with doors installed in the semi-circular arches, and the three verticals of high windows repeated their rhythm in the main plane. The main hall was expanded quite a lot during that time and acquired the currently seen horse-shoe form plan. Next to the historical details, the interior décor of the hall reflects the tendencies of art deco, expressed through various ethnic floral motifs. V. Landsbergis-Žemkalnis expanded the building quite a bit, though the old part has remained almost unchanged. The lateral wings rose to two-floors, and two-storey extensions for technical premises were built from the side of the Kęstutis street. Though new Historicism motifs, such as pilasters or richly profiled cornices were used in the new extension buildings, but their architecture was a lot more “peaceful” and closer to the rationality typical of the Modernism architecture. It’s safe to say that three different phases of Historicism intertwine in the current building: tsarist, stylistic searches of the early independence, and a feature typical of the architects of the young generation of that time – simplified elements from the older styles.

Decorative solutions, which have appeared during first reconstruction, have still remained in the main interiors, namely doors architraves and mouldings, colour solutions, lighting, including the chandelier of the grand hall. Landsbergis signature may be seen in the wooden handrails of the stairs designed by him. One the most important solutions of his reconstruction was the quickly lowered iron curtain, that was supposed to separate the audience hall from the stage in case of a fire. The grand hall came close to looking completely different than it does today. Just year later, in 1931, a large fire broke in the building and the solution adopted by the architect helped save the grand hall. 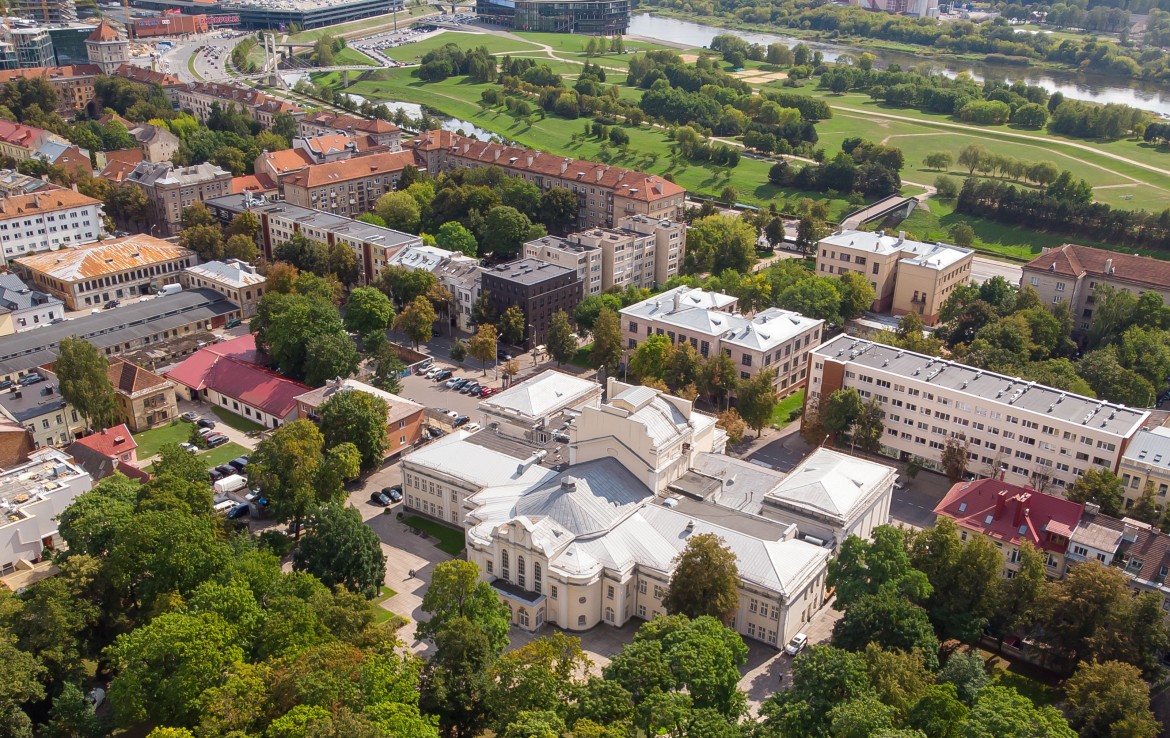 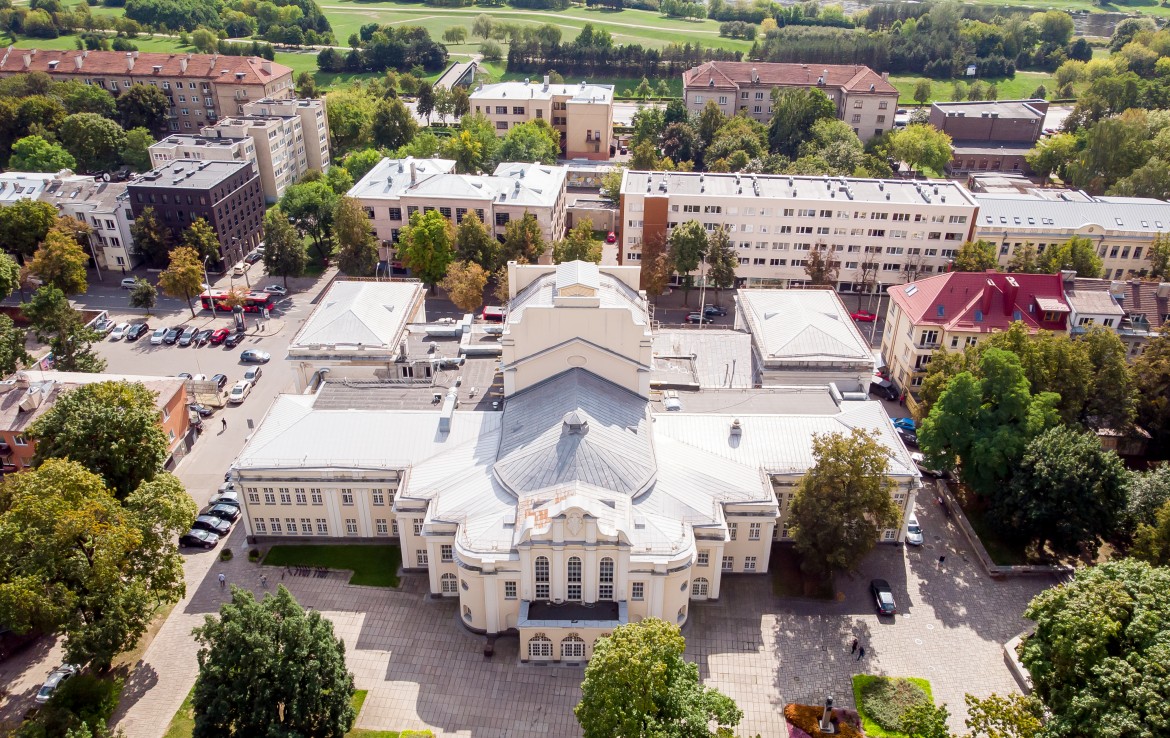 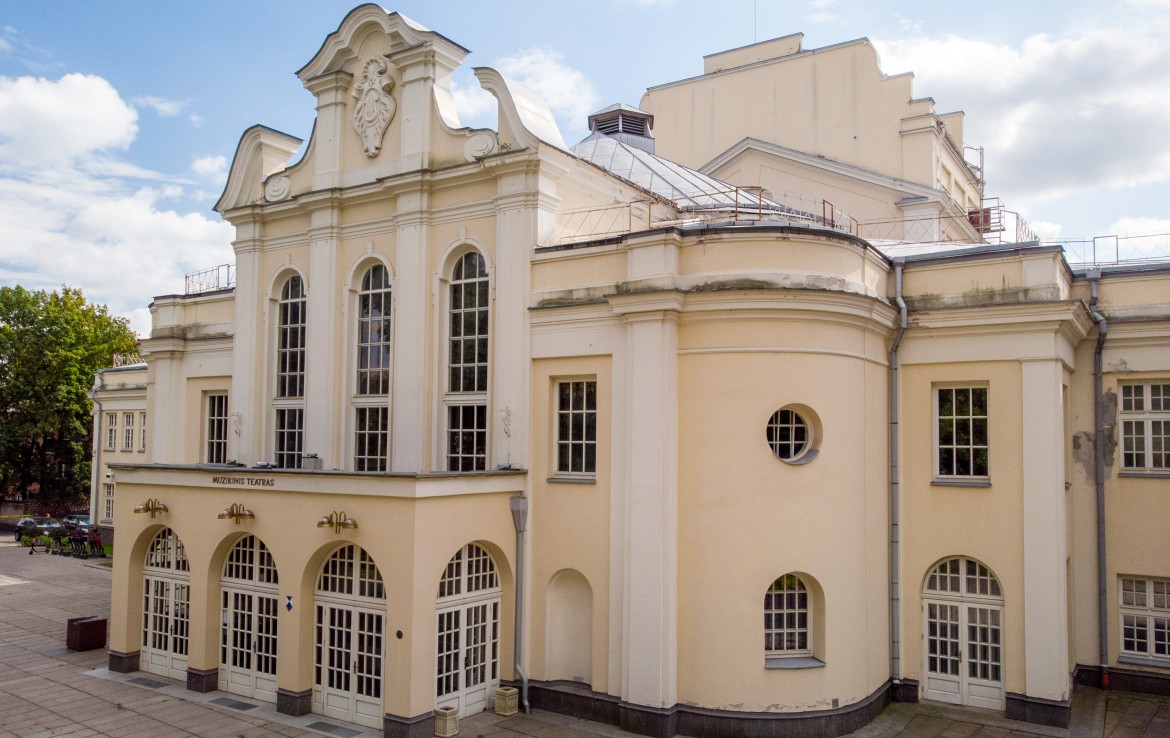 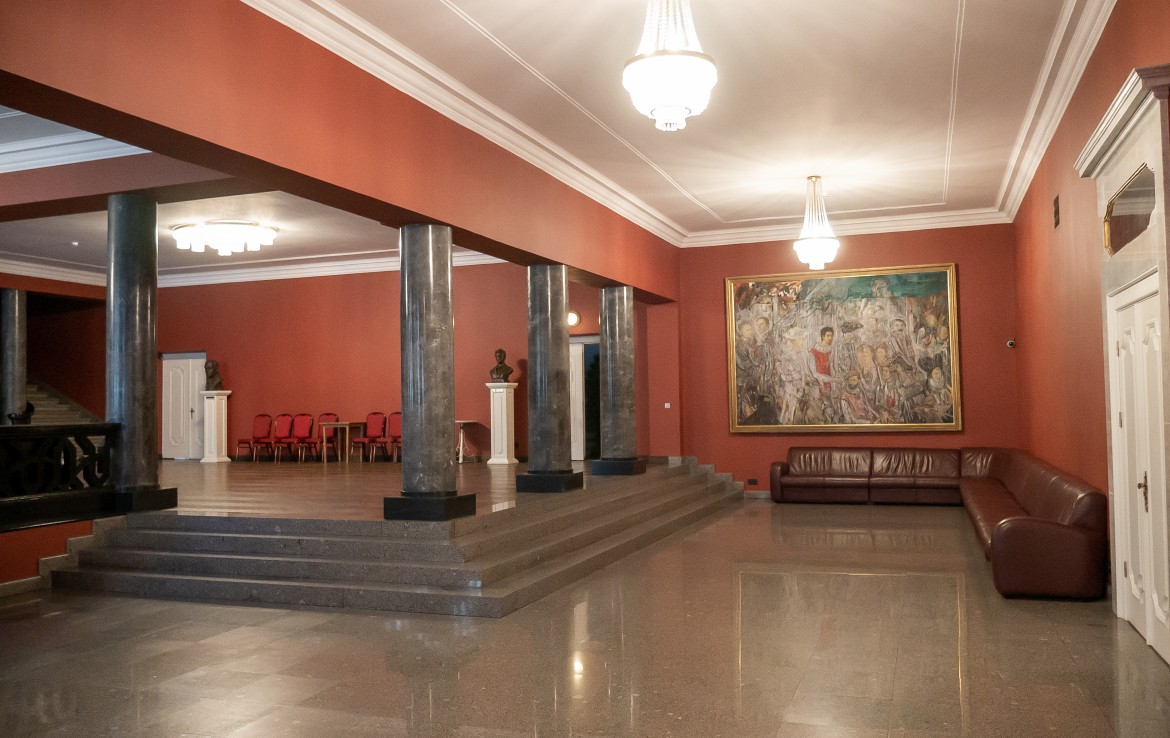 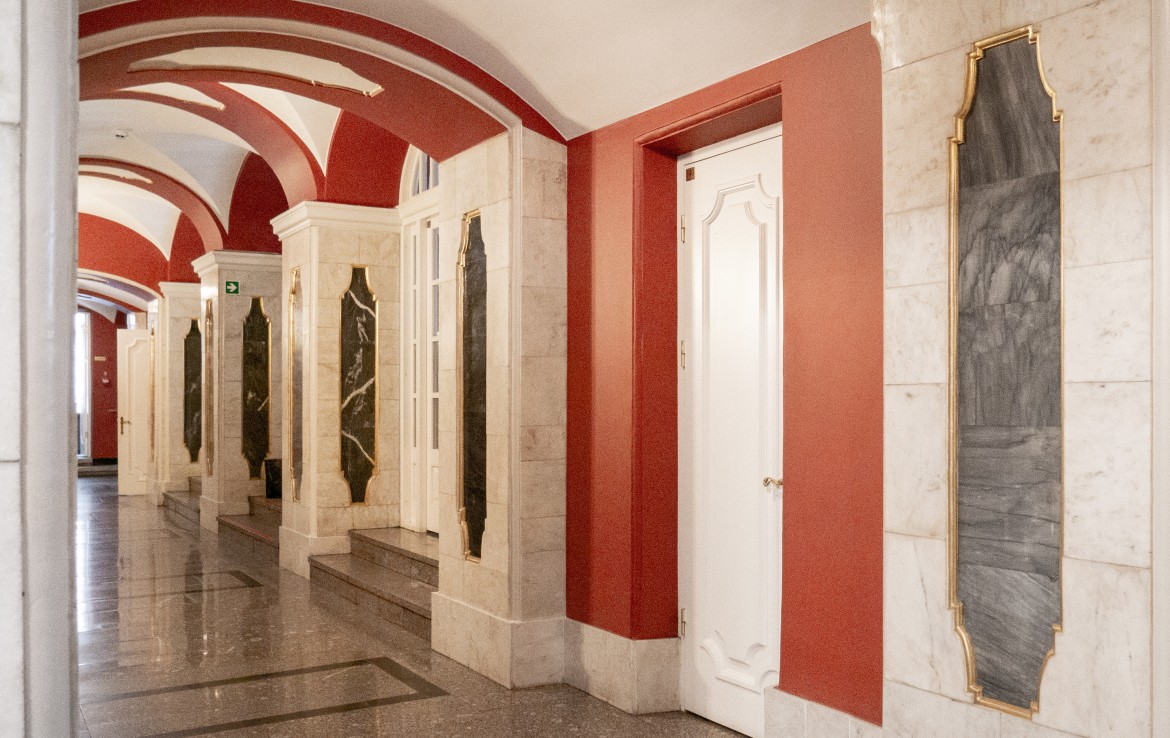 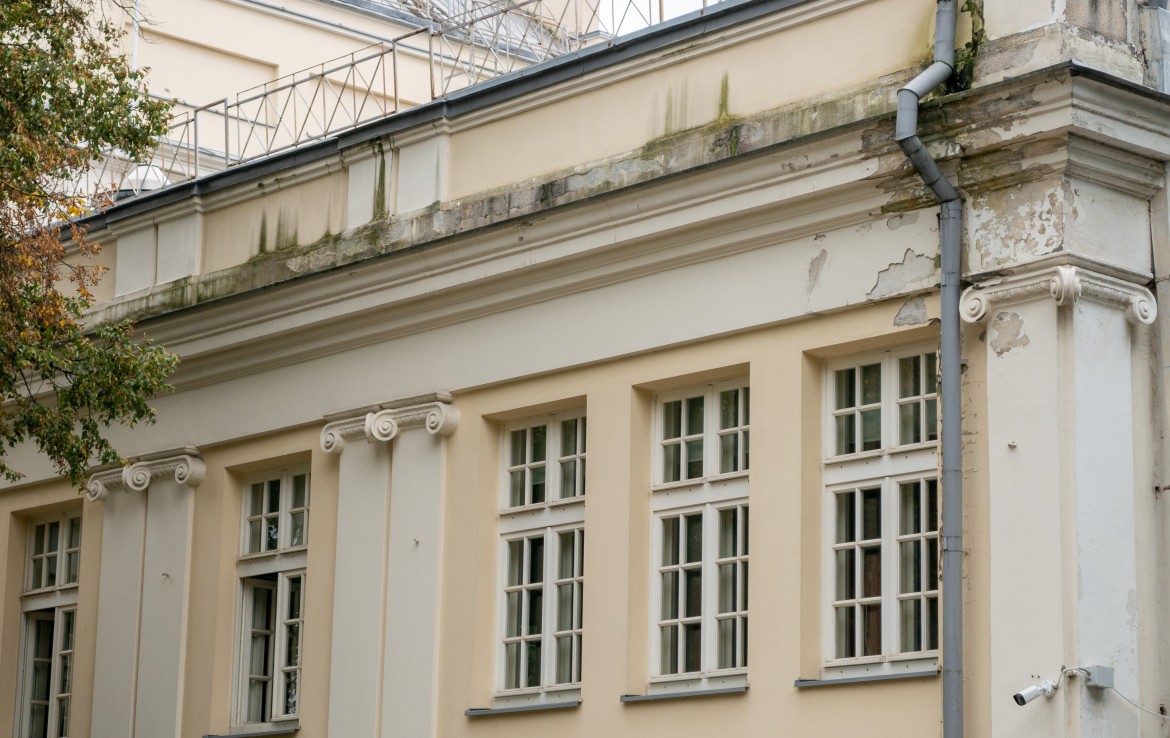 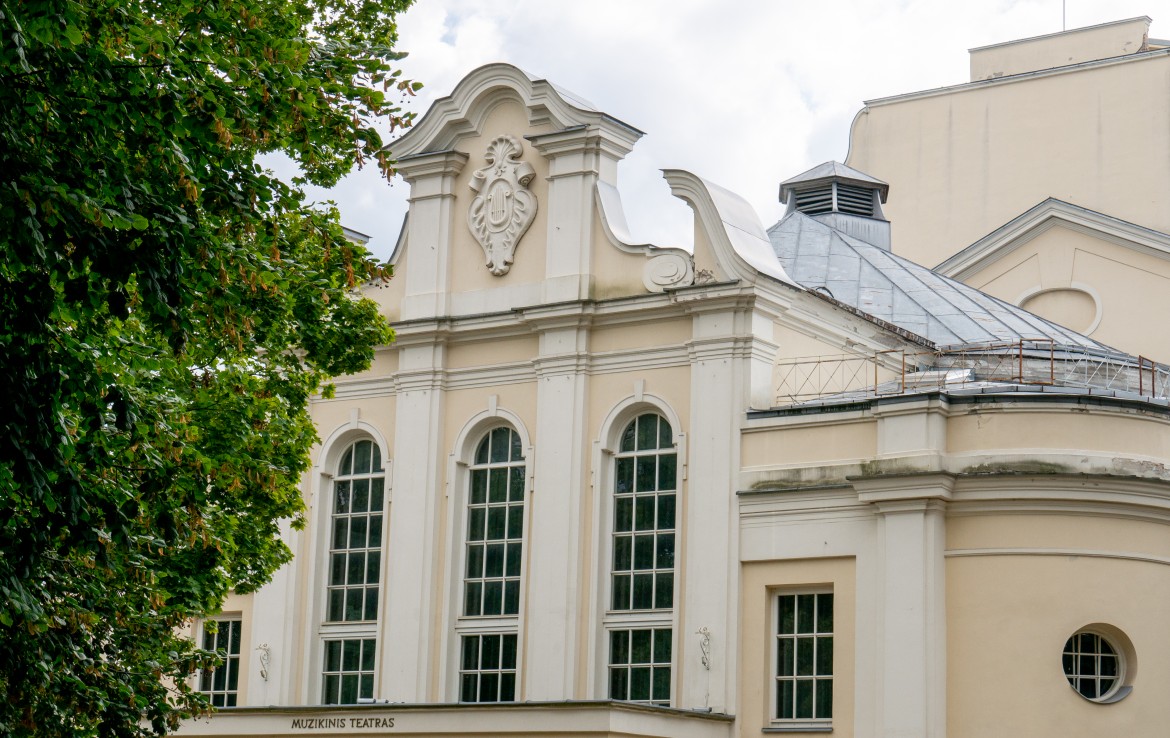 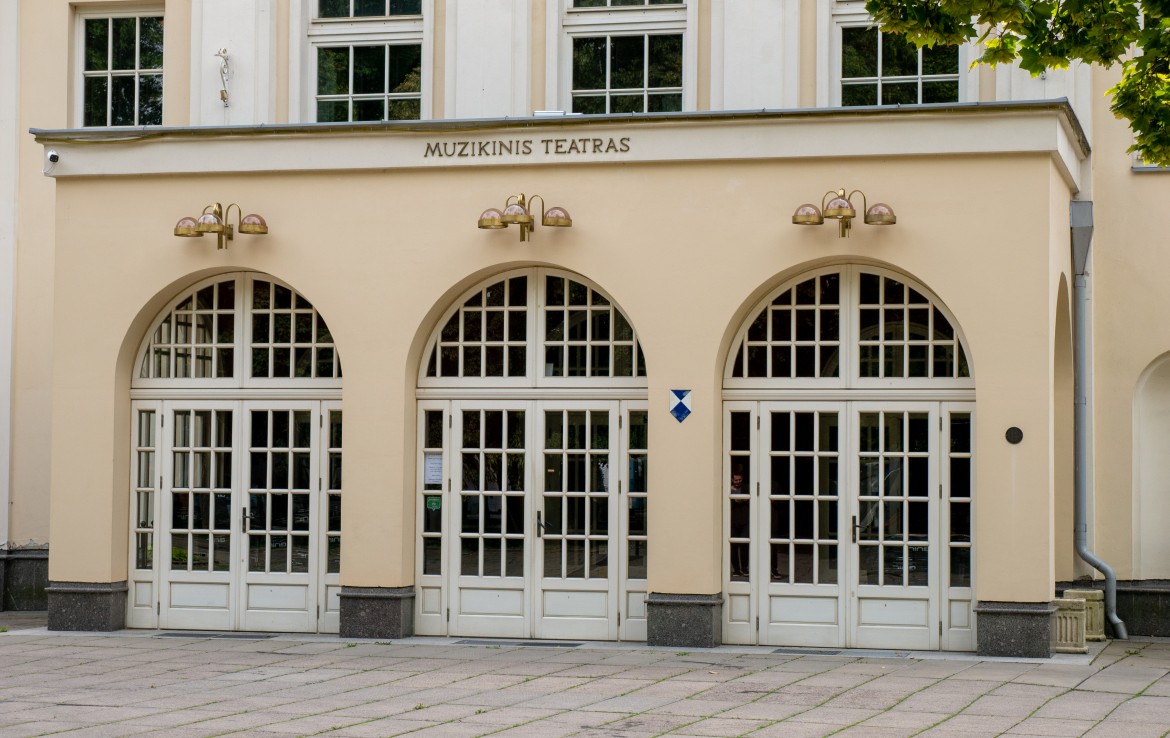 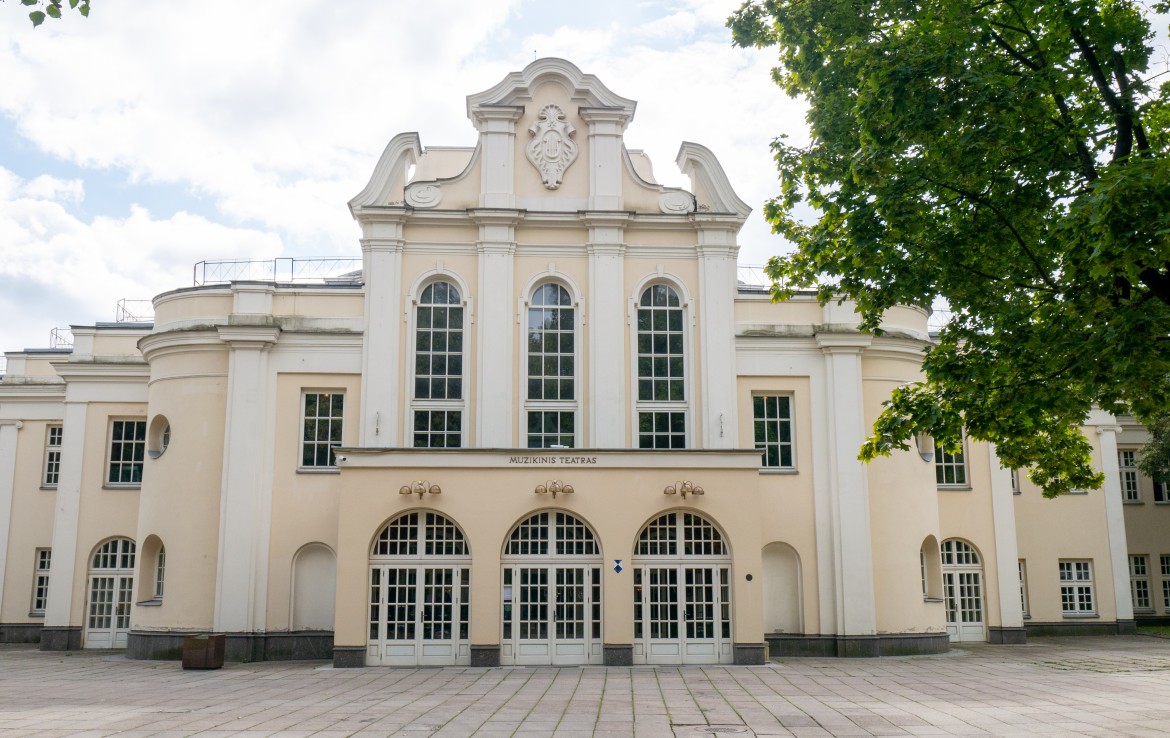 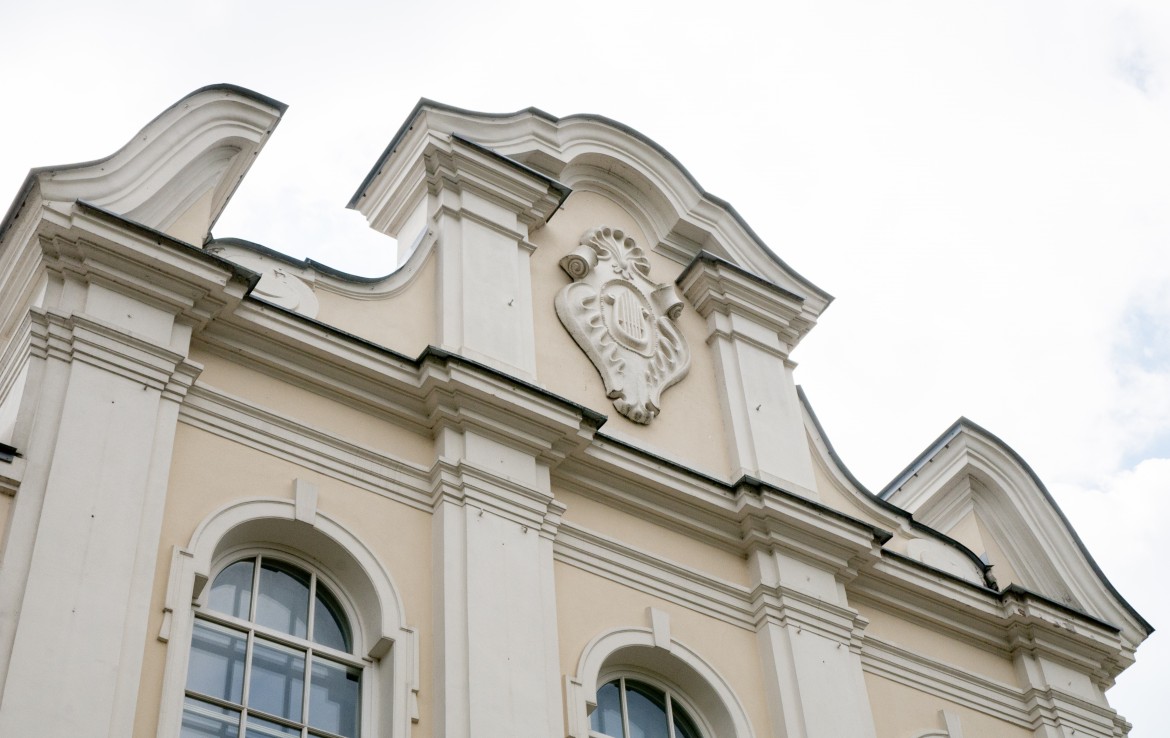 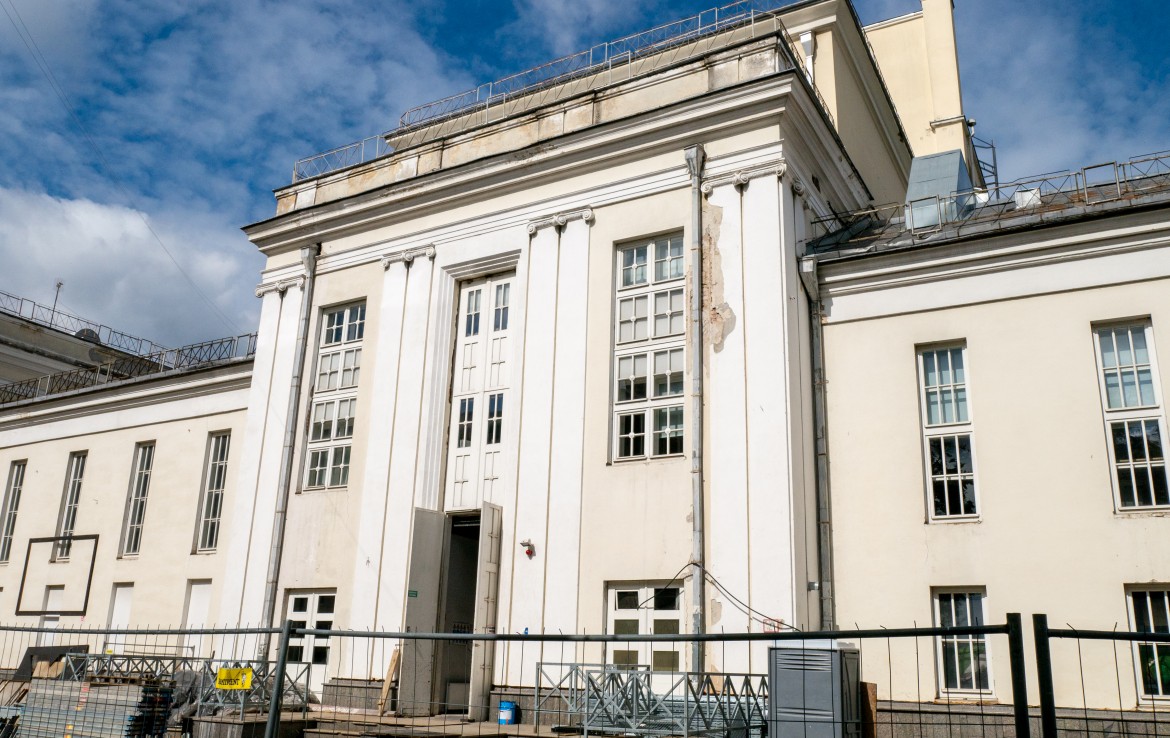