It is believed that the parish church of Kaunas, which became the arch-cathedral in the course of history, was founded by Vytautas the Great himself. The construction of the church, first mentioned in 1413, was very long one, as it was common at that time, and its current appearance was formed by several reconstructions, mostly taking place as the result of war. For example, the current tower appeared only in the first half of the 17th century, and it’s already typical of the architecture of the Renaissance period, and the interior is the result of the Baroque era; however, the exterior of the sanctum retained its Gothic appearance for the most part. During the period of the Provisional Capital as well as during the Soviet period, the Arch-Cathedral Basilica of Kaunas has been the most important Catholic prayer house in the country after the Vilnius Arch-Cathedral was closed.

According to the researchers, the lower parts of the nave walls can be considered to be the oldest parts of the church. There are significant differences between the solutions of the lateral façades, revealing that the constructions took place at different times – the presbyterian part with a triple apse distinguishes itself by a much greater expressiveness. The front façade of the church is almost blind – despite the small, scattered window niches and the portal of the main entrance, the key accent here is a large pointed-arched window niche. Lateral façades are flat; they are divided by groups of windows grouped in two, which are placed in rounded niches, on the first floor, and on the second floor – by the rhythm of windows and buttresses in the central volume. The façades of the presbytery and the apse are formed of the rhythm of narrow buttresses and Gothic pointed-arched windows.

The theory is that the church gained the basilica-like area after one of the wars: the central nave was also raised when the current tower has been constructed. We can also observe different stages of the development of the church on its exterior according to the architectural forms or even different brick colours, which reflects the revolution of the Lithuanian architecture as well. The sacristy, which appeared in the end of the 15th century, is interesting for the fact that we can see crystal vaults which are rare in the country, dating back to the earliest times of the church. Although, as mentioned before, the interior of the church has been reconstructed into the one of the Baroque style throughout the history, the Gothic period is still reminded here by the partially preserved net vault of the presbytery. 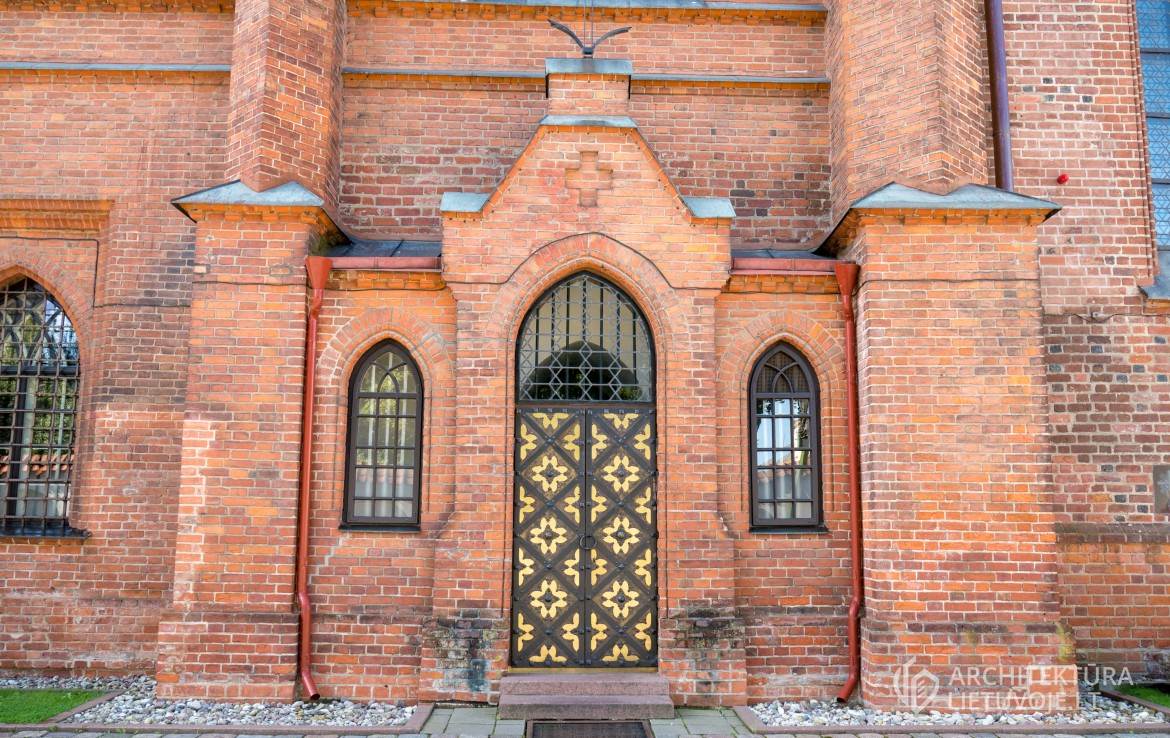 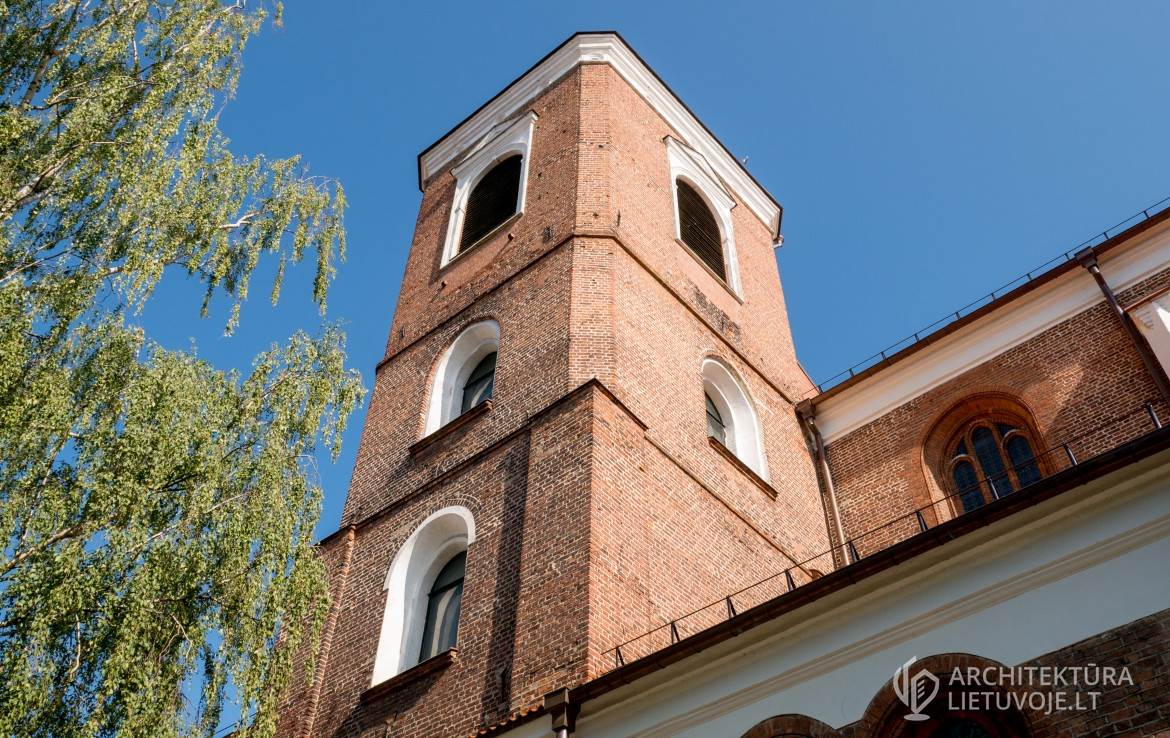 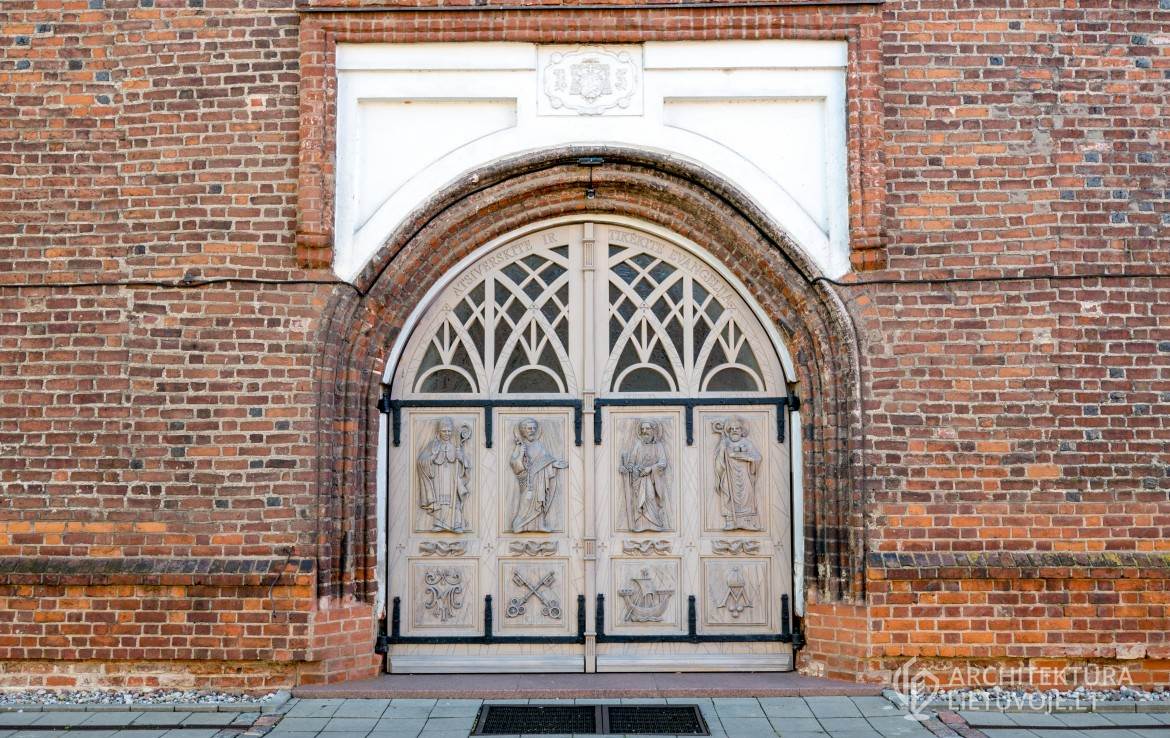 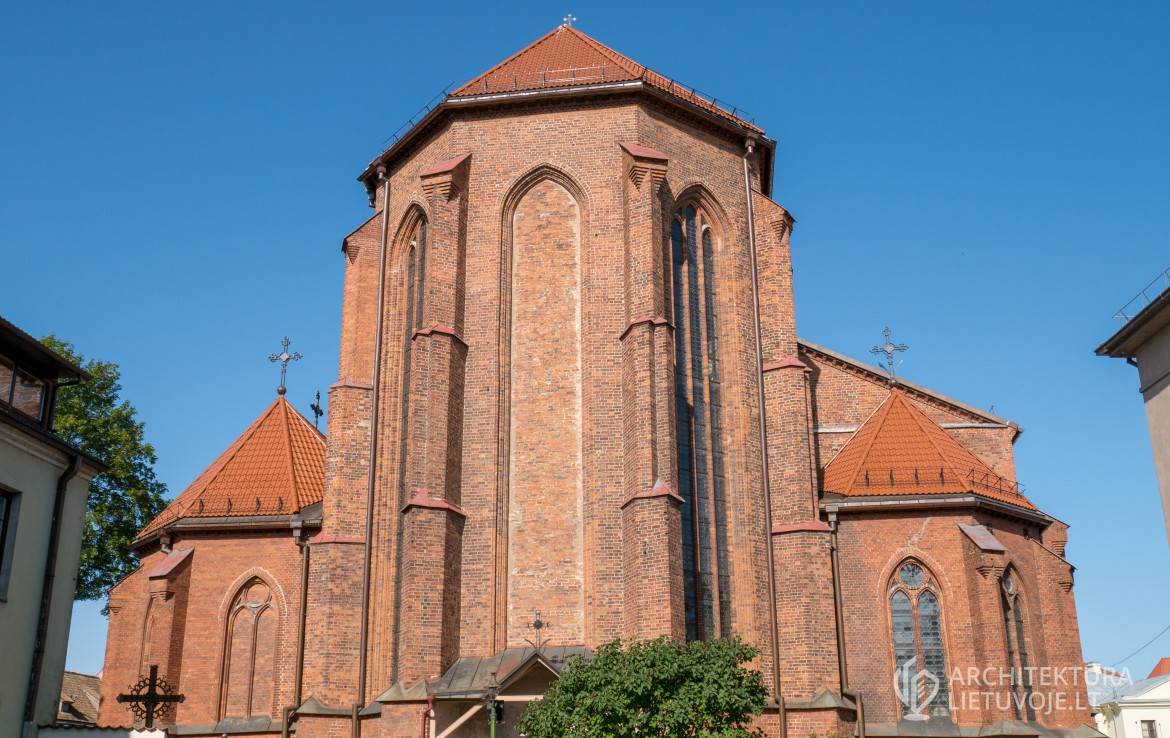 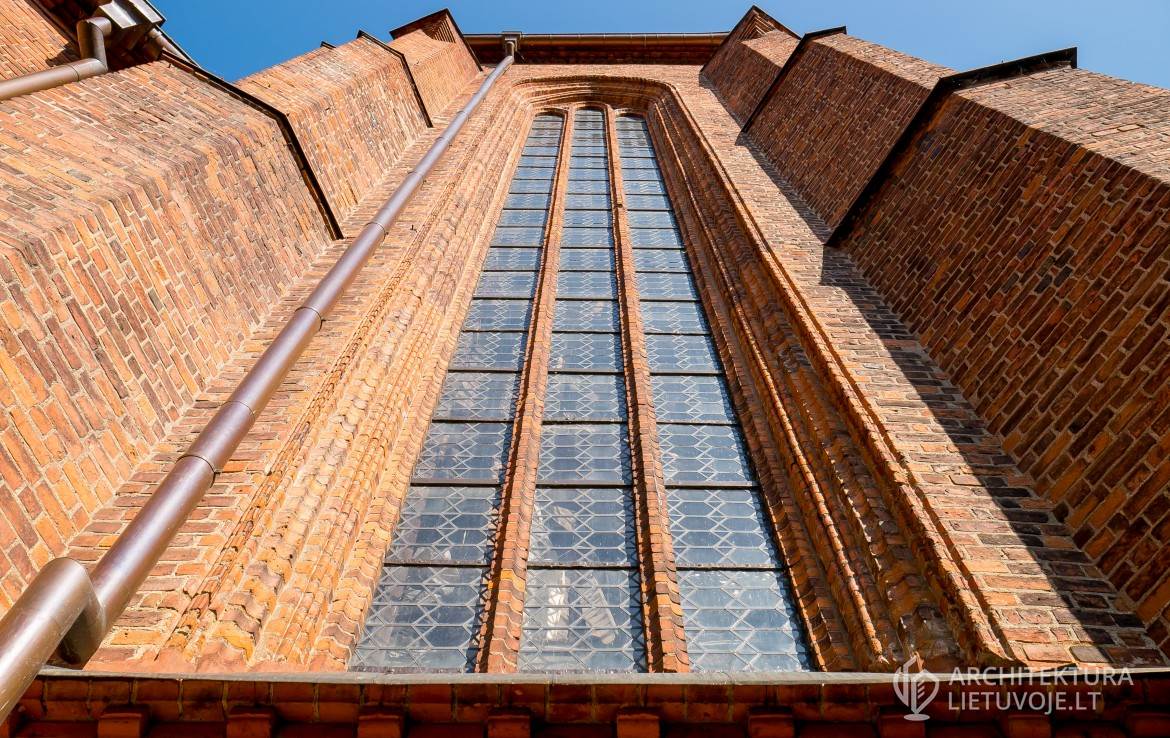 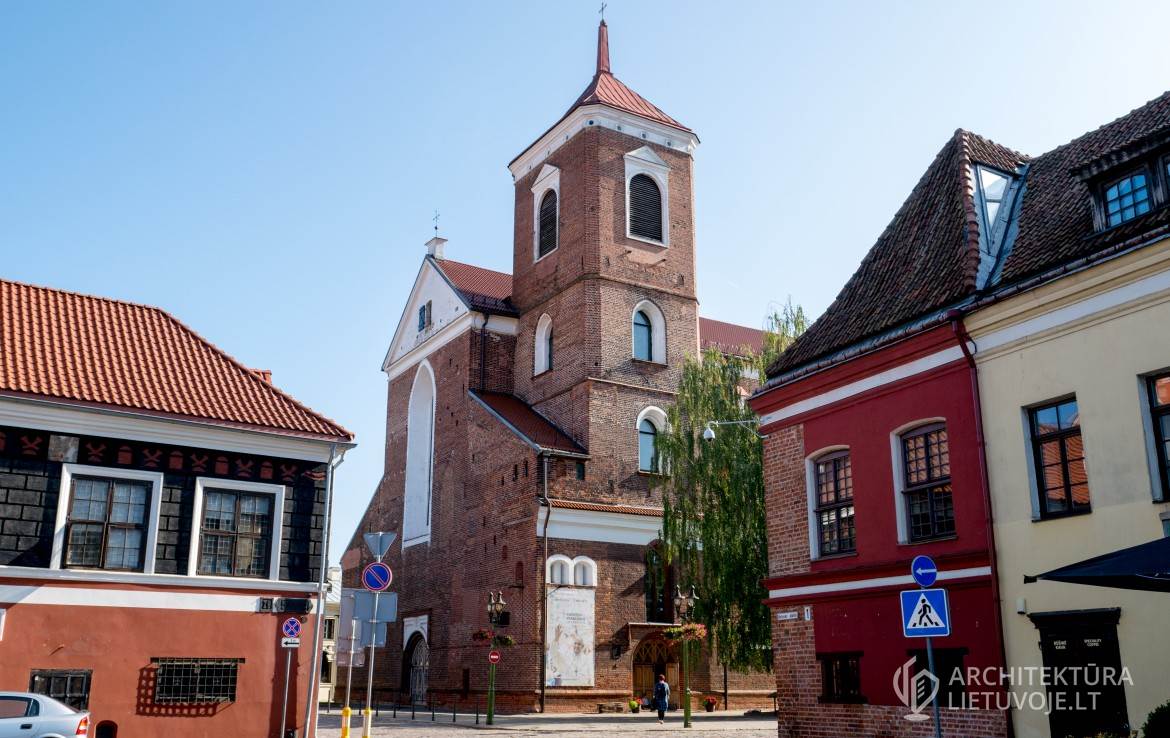 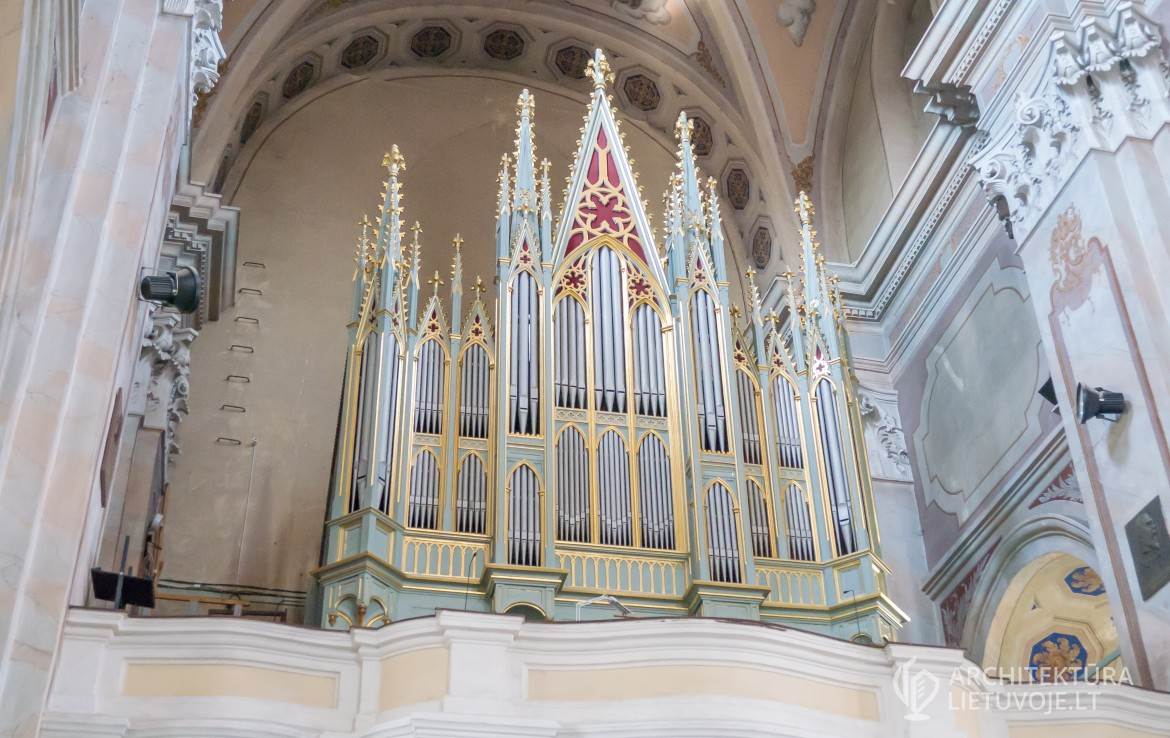 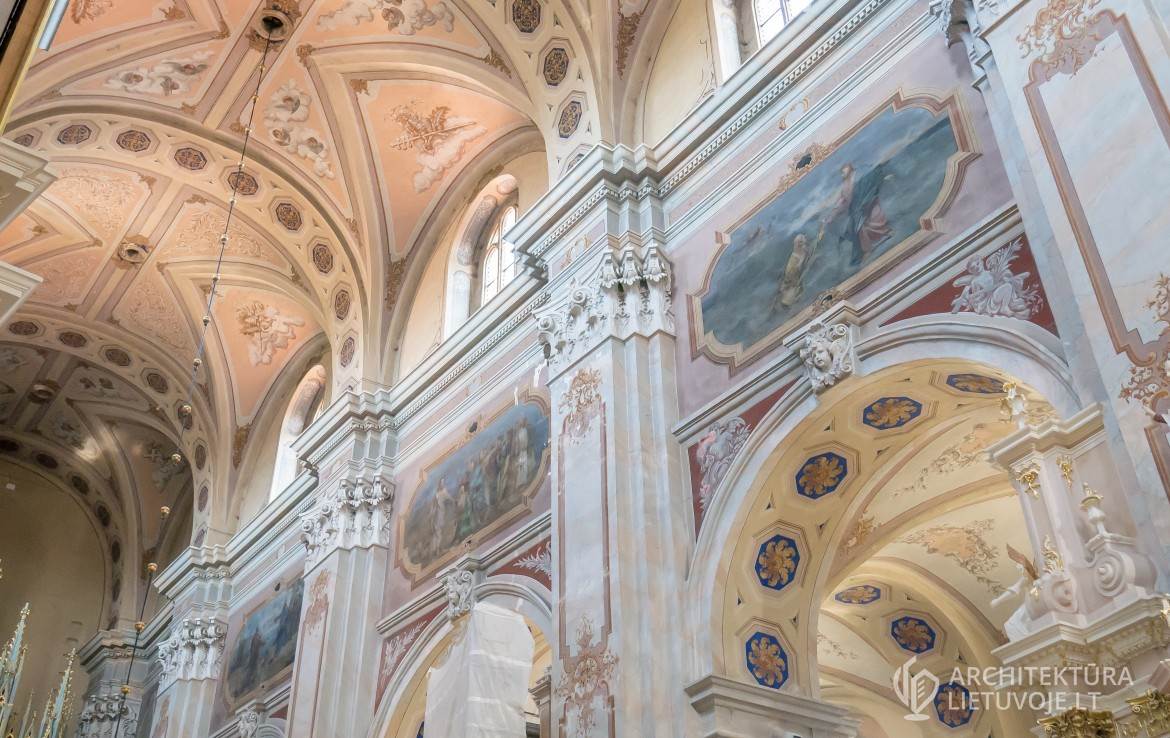 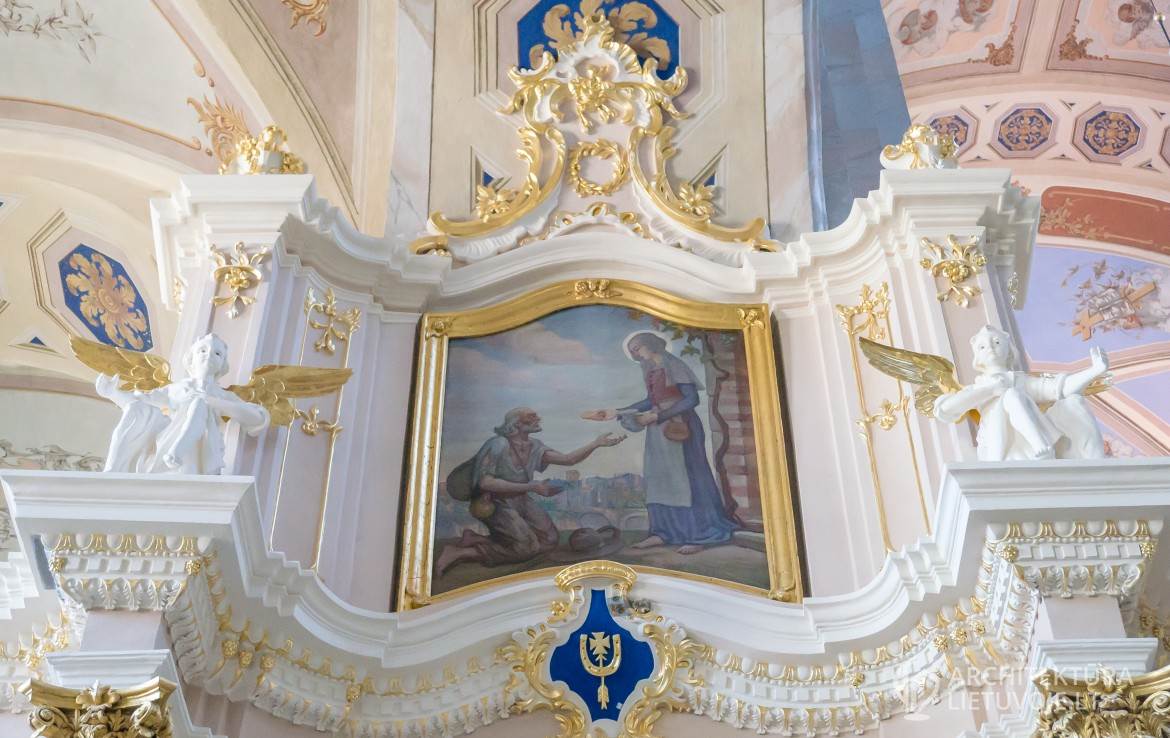 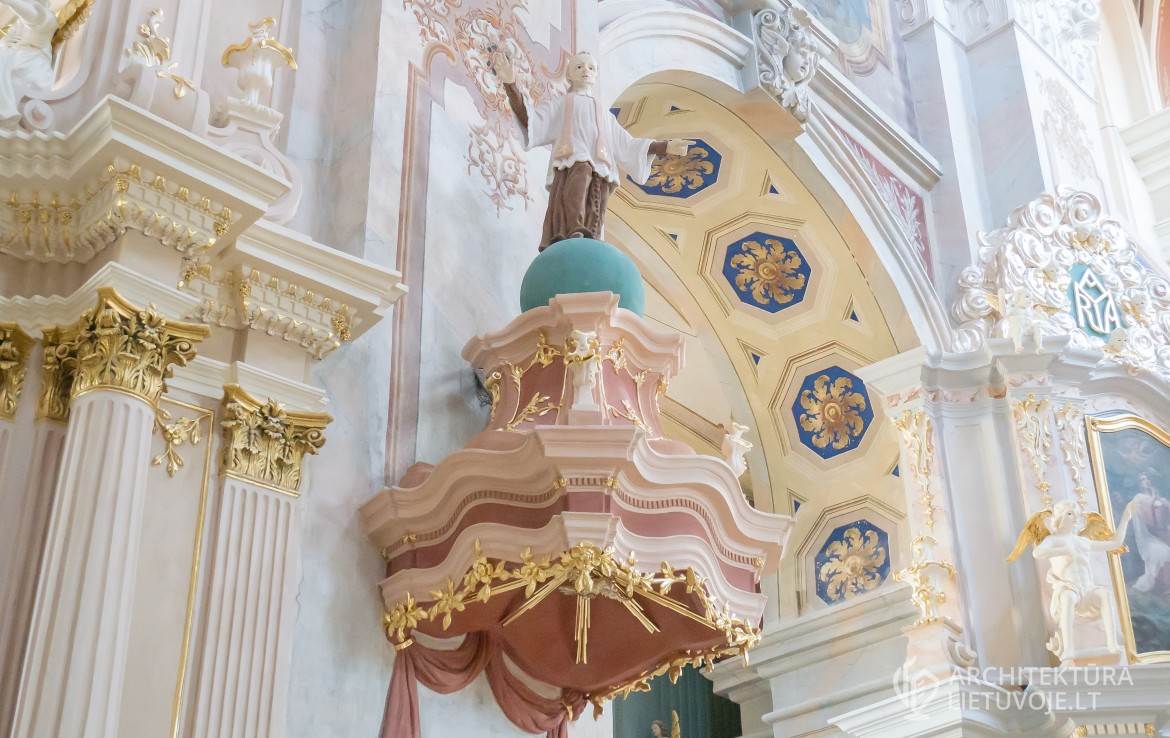 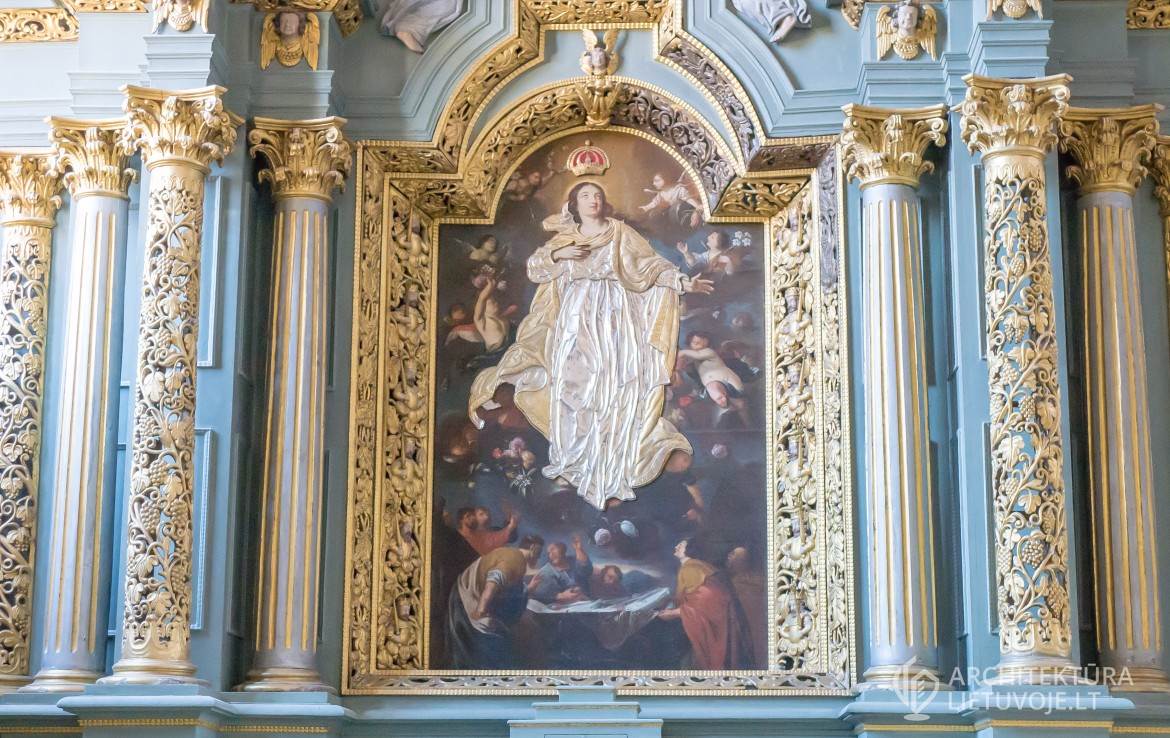 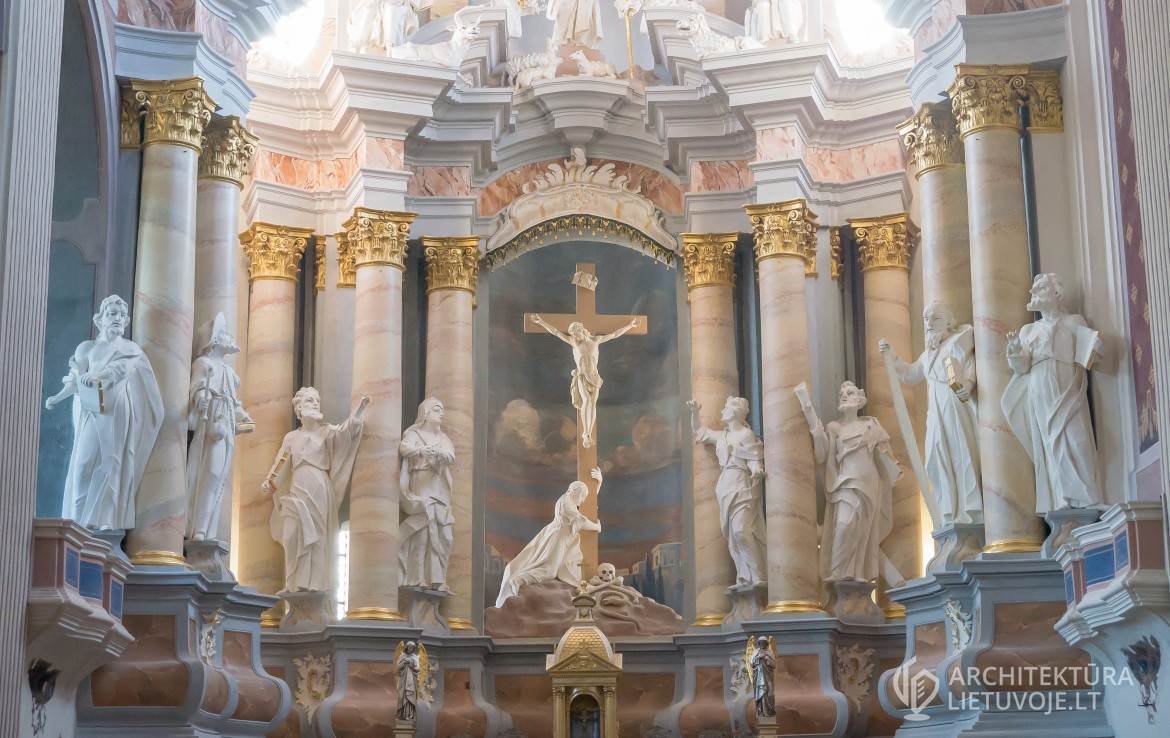 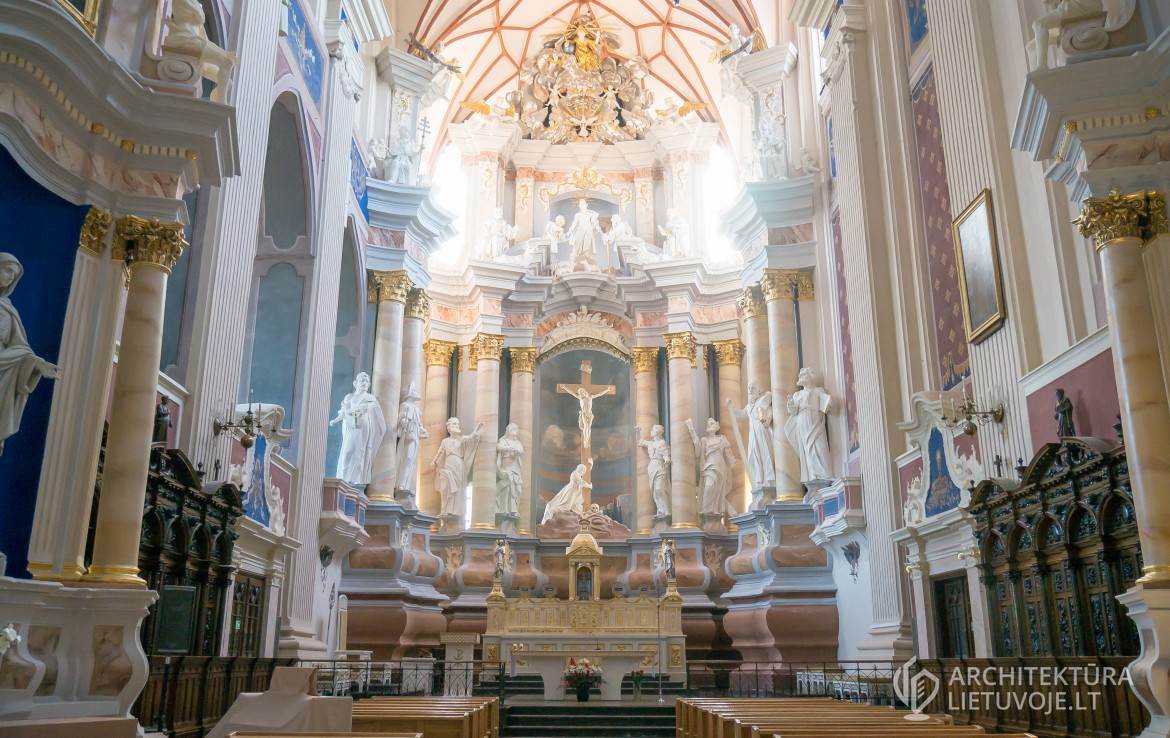 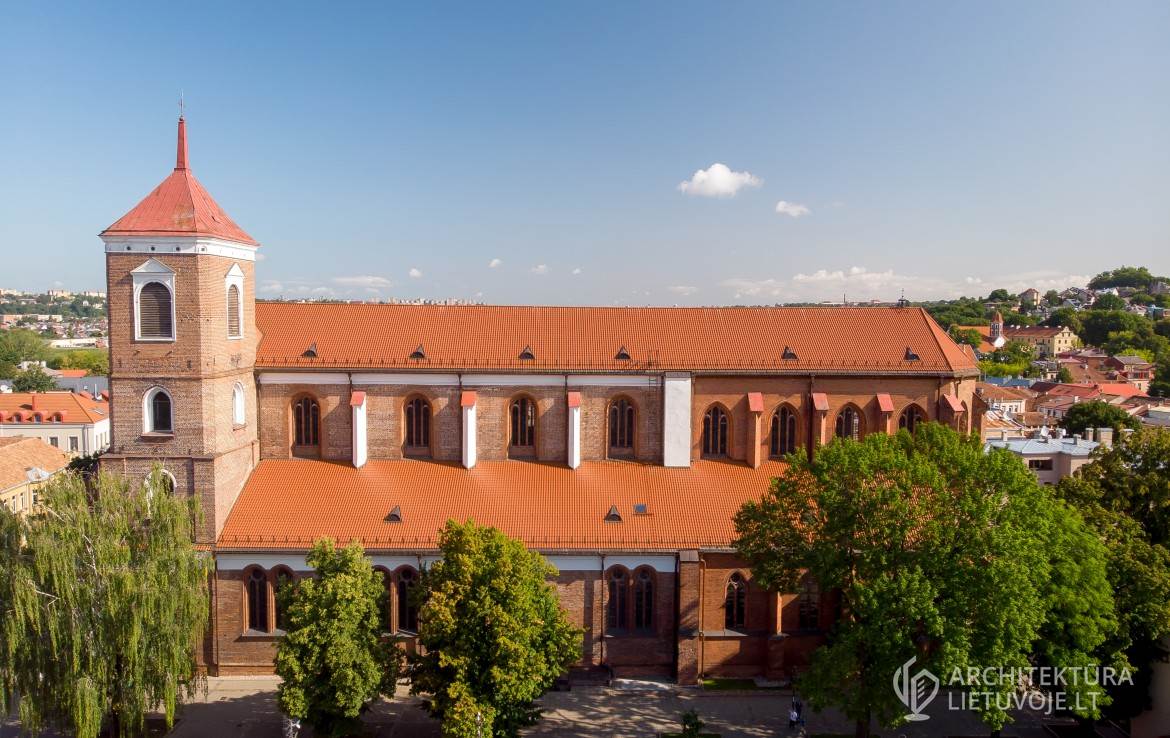 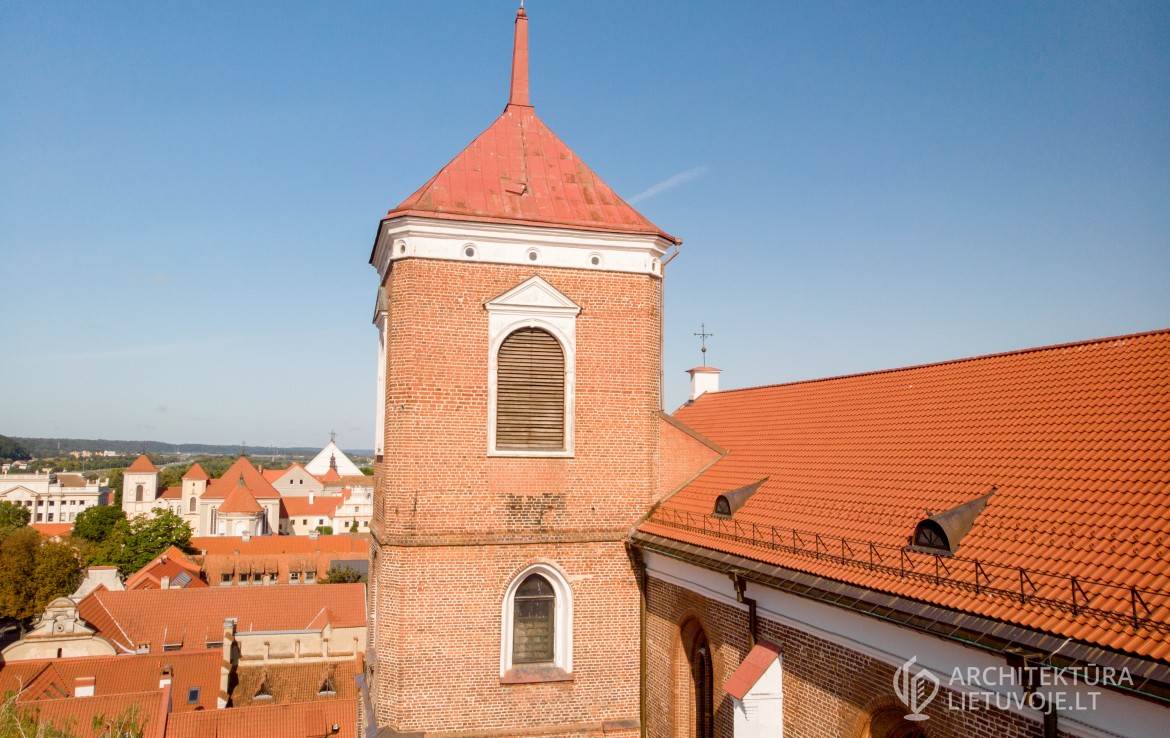 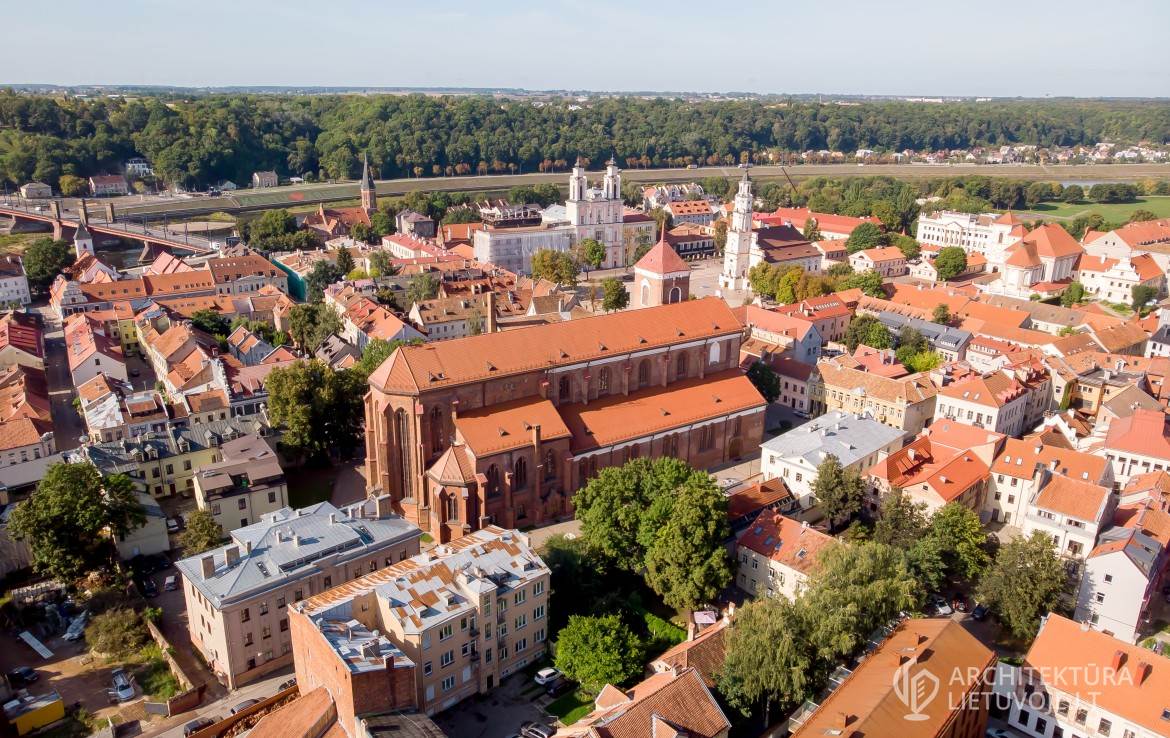