The word Belvederis is derived from two Italian words “bel” and “vedere” and means a place with a beautiful view if translated not strictly. Over time, the term, combined from those two words, started to be used in architecture for any structures intended to enjoy the beauty of surroundings. It could be a small pergola in a beautiful place in nature or an entire complex of a palace. Idealization of surroundings together with Romanticism became extremely popular in the first half of the 19th century. In the vicinity of Seredžius, having climbed 365 steps, you will find one of the most impressive in Lithuania complexes of the time, called in the manner above – Belvederis Manor. Prior to visiting the Manor House and other structures of the complex, let us take a look at the surroundings: we are in the landscape park of the Romanticism period. As the architecture of that time started to abandon strict canons of Classicism, the same can be said about the parks surrounding manors – instead of searches for symmetry, designers used to seek contact with nature in the neighbourhood, at the same time buildings also used to be erected with liberty.

In the 19th century, the land of Seredžius became the property of the Burbos: namely this family built the Manor Ensemble in a picturesque location in the mid-19th century. No doubt, the signs of agriculture institutions that used to operate here even in the inter-war land reform times and later period full of negligence are seen here, still the impressiveness of the Manor is witnessed first of all by ability of the architecture to fascinate by its beauty even being in such a poor state. Not only the name of the Manor is of Italian origin: at that time in the architecture of European manors and villas, so-called “Italian style” was prevailing, which accentuated and romanticised the period of Italian Renaissance: it was the beginning of the Neo-Renaissance period. Belvederis Manor was the perfect example of this. Firstly, you can see a free and asymmetrical plan, which is characteristic of Romanticism architects, who wanted to escape the framework of Classicism. The Manor House consists even of five volumes connected to each other.

As is characteristic of Neo-Renaissance of “Italian style”, in this House, decorative fasciae of windows and decorations under the windows are particularly accentuated here, also, great attention is paid to division of storeys – by both cornices and wide bands of friezes, interspersed with rosettes of several types or floral ornamentation. The style is reflected by the elements of the top parts of the facades as well: the structure of the double-pitch roof, propped with profiled bracing struts in the smaller avant-corps and the main accent of the Manor House ended with the especially massive cornice that is the main culprit of the name of the Manor: Belvederis tower. In the upper tier of it, a ribbon of three arch windows is integrated – perhaps this is the most “Italian” distinctive feature. The rhythm reiterates in the ribbons of windows and the niche of the smaller avant-corps. Irrespective of the fact that in such type Houses, Neo-Renaissance unity used to be maintained, still in Lithuania one may note that sometimes influence of other styles emerged. In the side addition of the Belvederis Manor and in the single-storey orangery, joining the addition with the main volumes of the House, one can see Neo-Gothic niches, windows, their division and ornamented frieze band. In the architecture of similar buildings located in warmer countries, loggias with rounded arch arcades were popular – in the part of winter garden, one can see here a closed its variant, adapted to this country climate.

The interiors of “Italian style” manors used to be decorated more freely, yet the relation between the structures and decor was accentuated particularly. In the deteriorating rapidly interior of Belvederis Manor, one can see many authentic parts: ornamented doors, stair rails, authentic patterned parquet. Part of ornate cornices of the ceilings and decor of stair arches have survived, while in the dining room one can still see wooden coffered ceiling with integrated rosettes. Even though the flooring is decaying, in the former room of cards some motifs of cards can be discerned.

Architectural solutions of the granary are original. Even though one is able to discern the principles characteristic of Classicism, still, apart from the pilasters and rectangular plan, some not so characteristic solutions may be noted: a large semi-round arch in the middle of the building with the wooden balustrade of the balcony integrated at the level of the first floor, while the windows of the ground floor and the first floor are in a visible contrast to each other. The windows of the first tier in the main façade are in the middle part of three niche composition: all three niches end with smaller ones, having integrated rosettes, thus the motif of a cross is created. Meanwhile the windows of the upper tier – pointed-arch ones, echoing to the solution used in some parts of the Manor House. The chapel of the Ensemble should be assigned to Neo-Gothic of Historicism, still it serves as a perfect example of mutual continuity between the styles of Romanticism and Historicism: many architectural historians consider both phenomena even as one. Nevertheless, the “Gothic” here is quite stricter and more expressive. As is characteristic of Neo-Gothic of Historicism, one can discern here even the ornamentation of the “brick style”. The facades are provided with playfulness by the rhythm of plastered planes and brick pilasters dividing them. 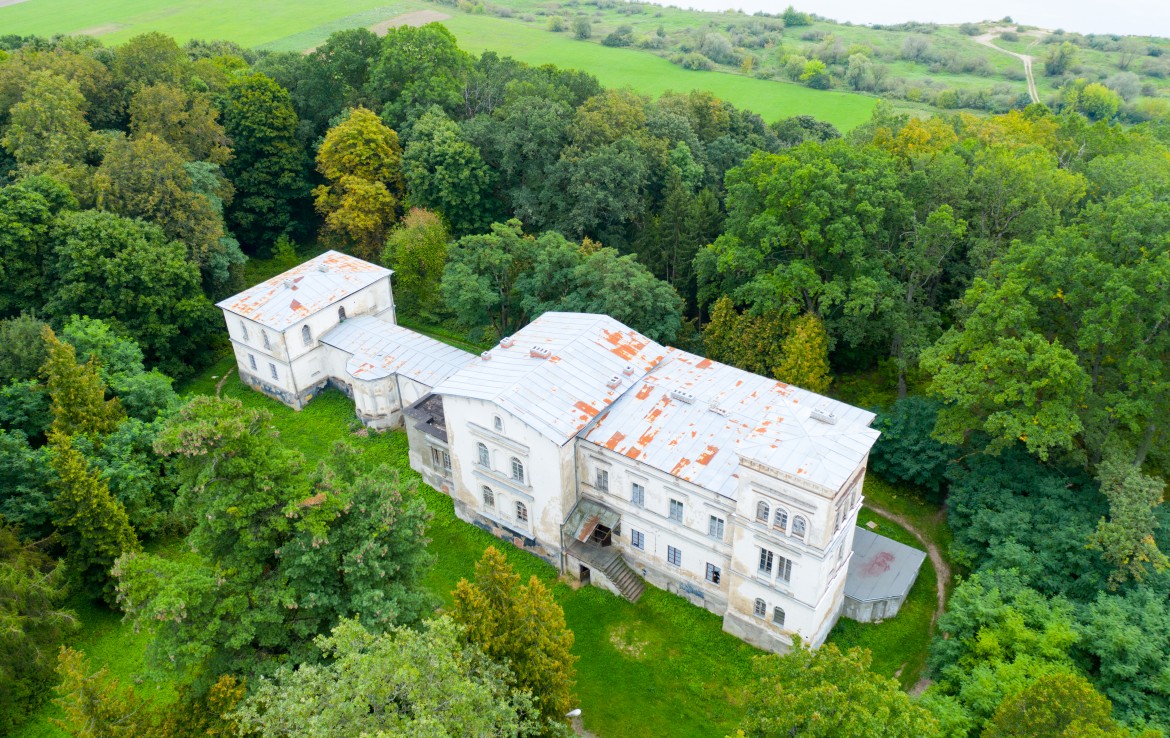 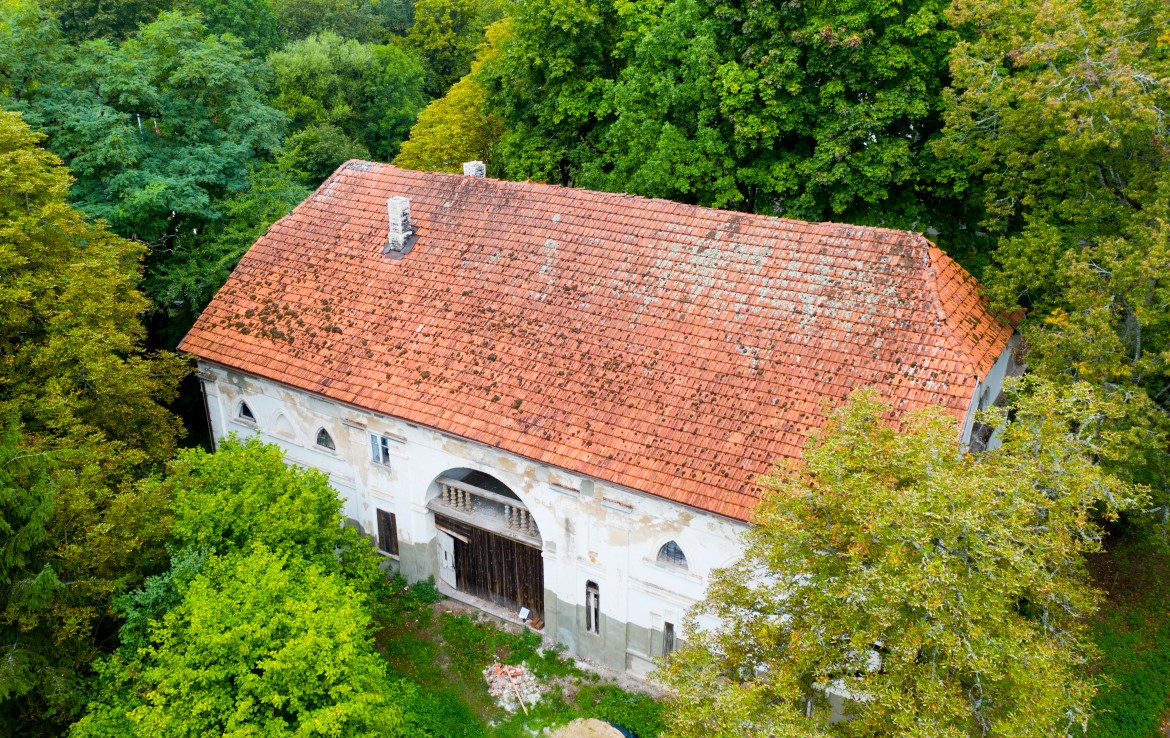 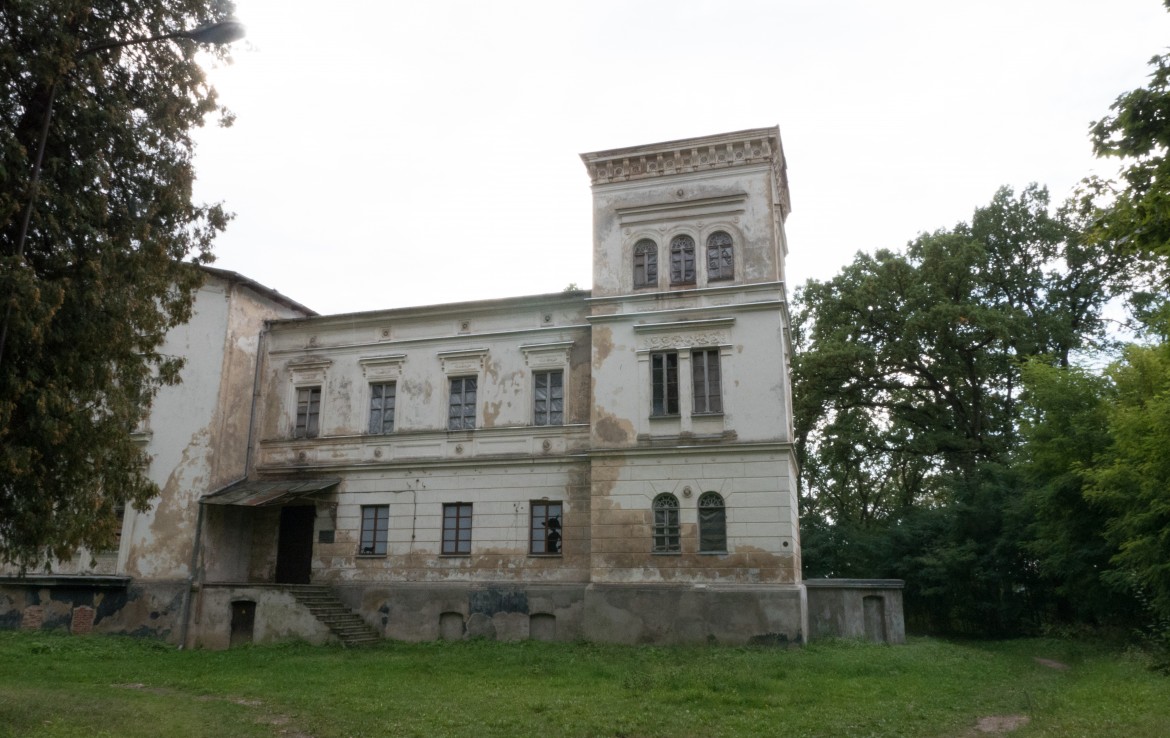 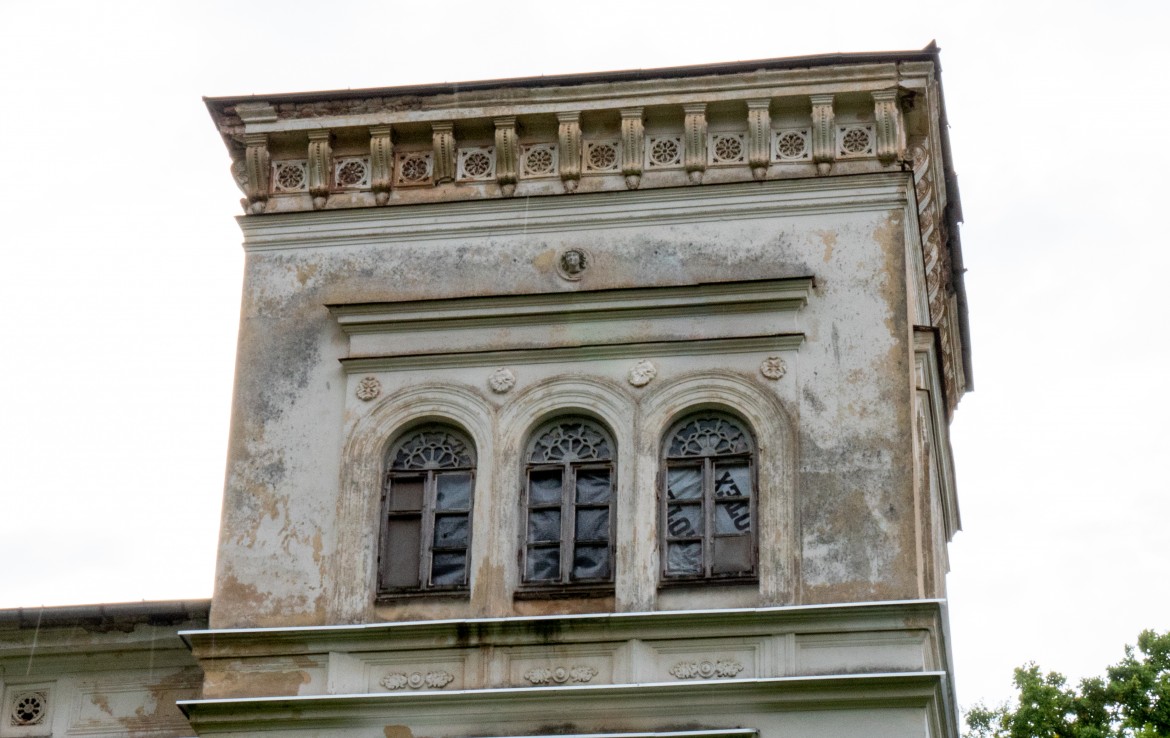 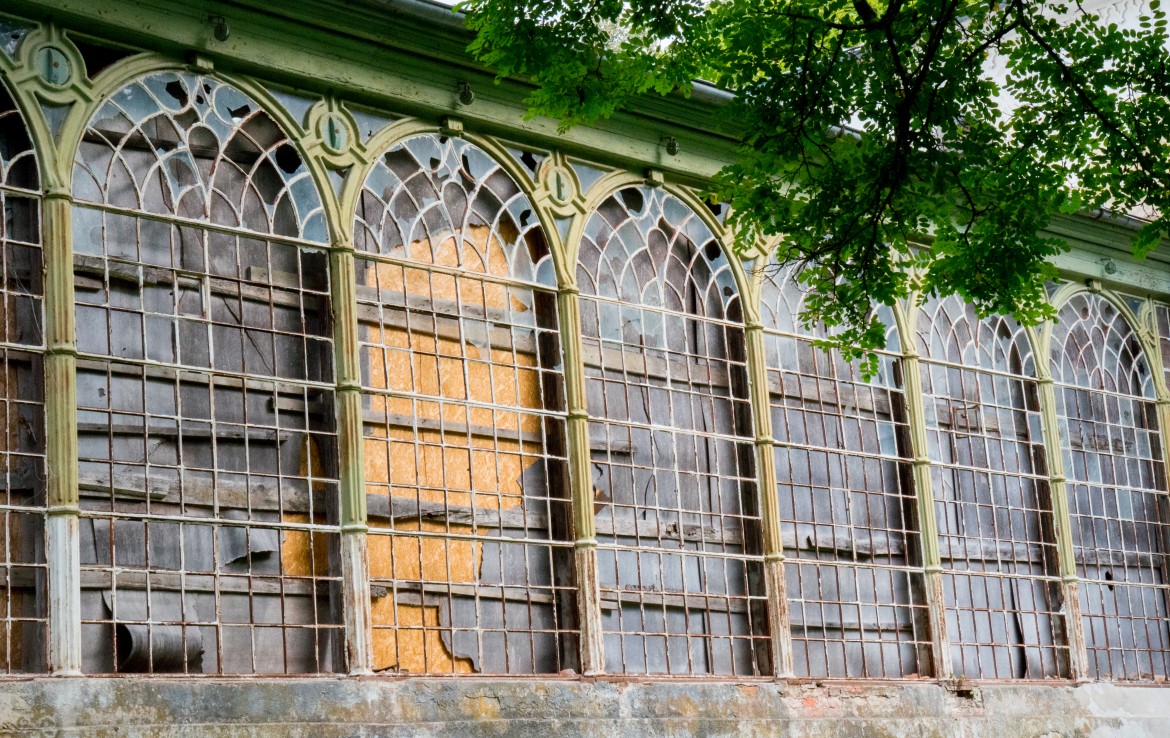 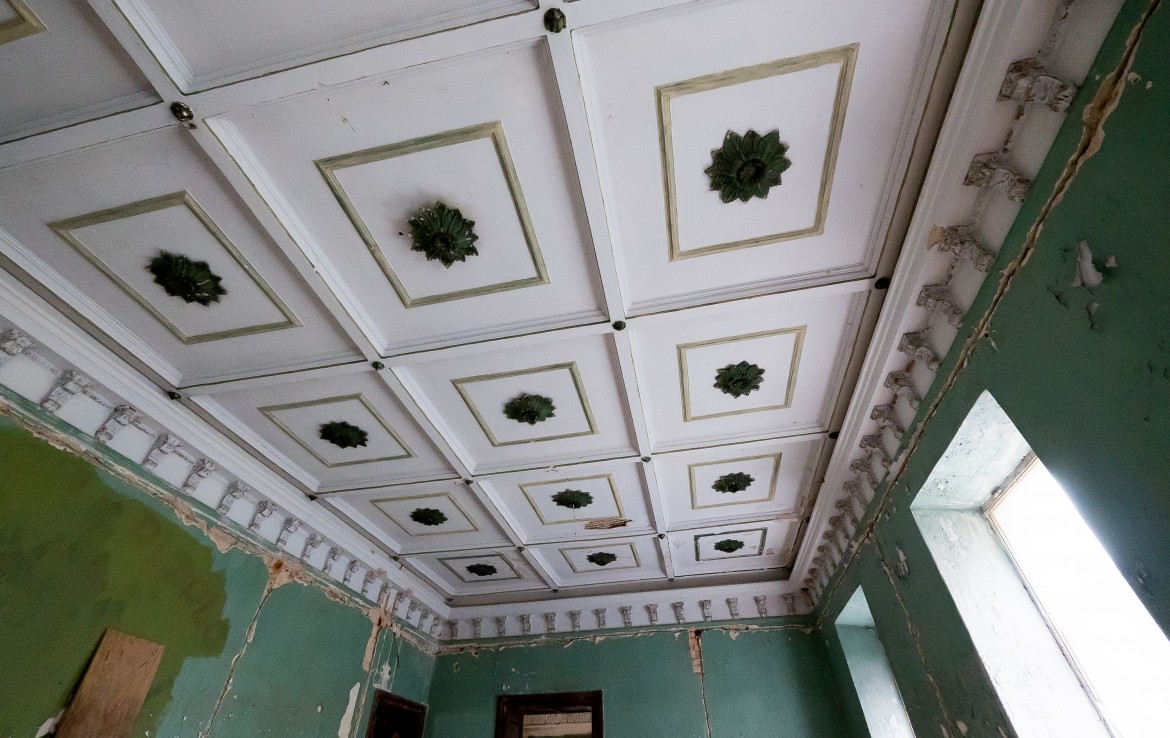 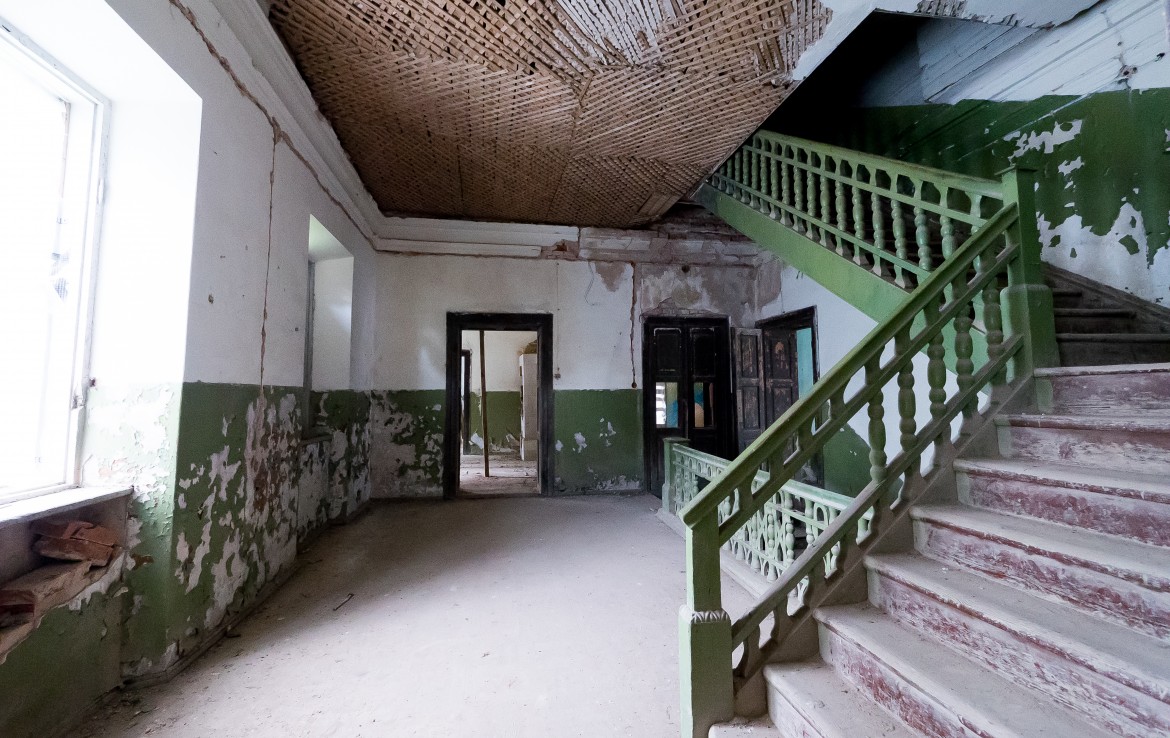 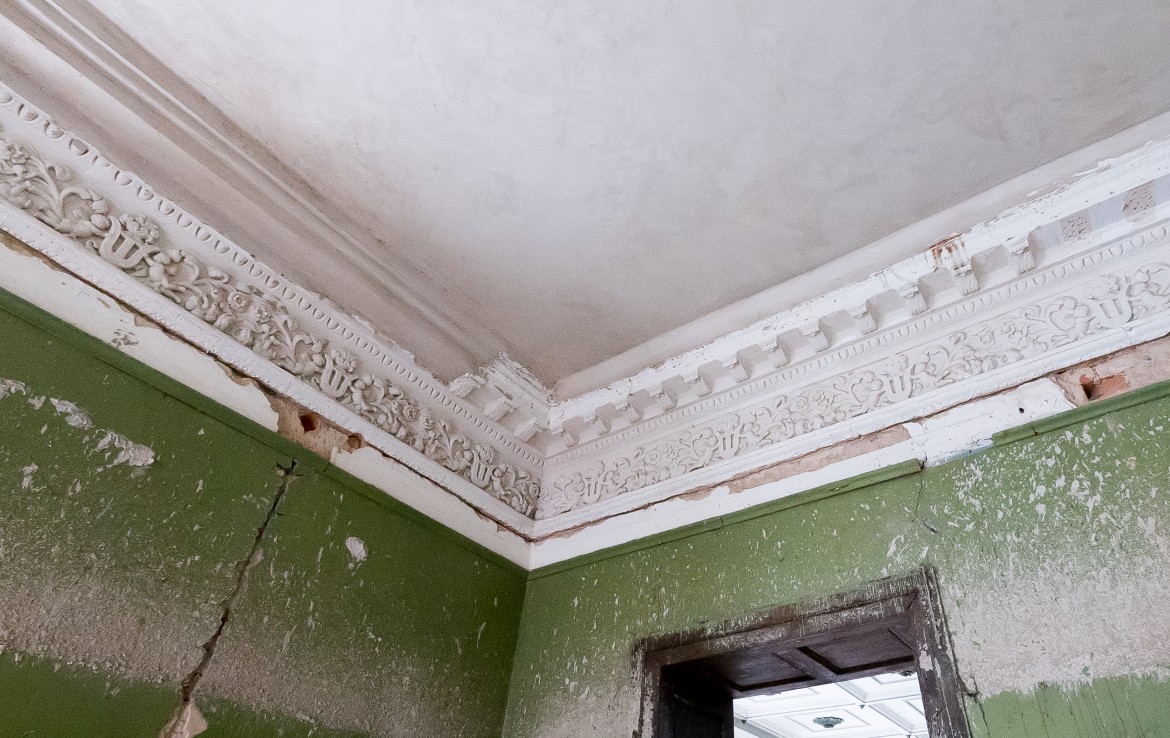 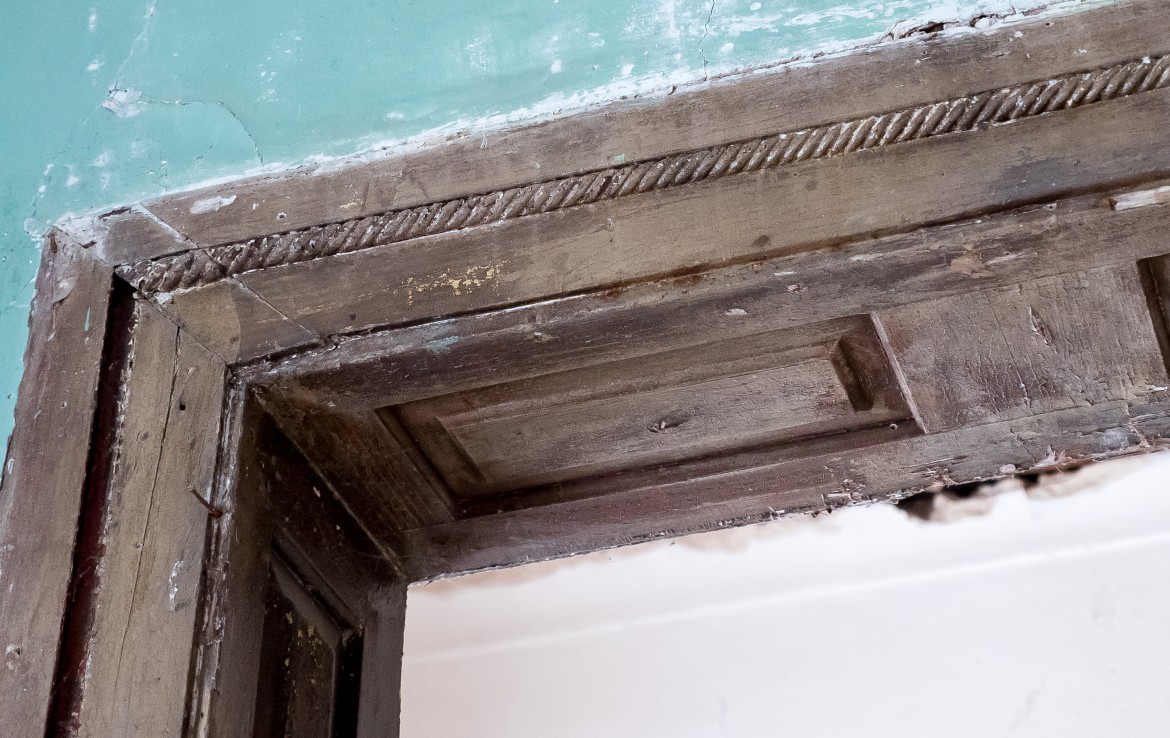 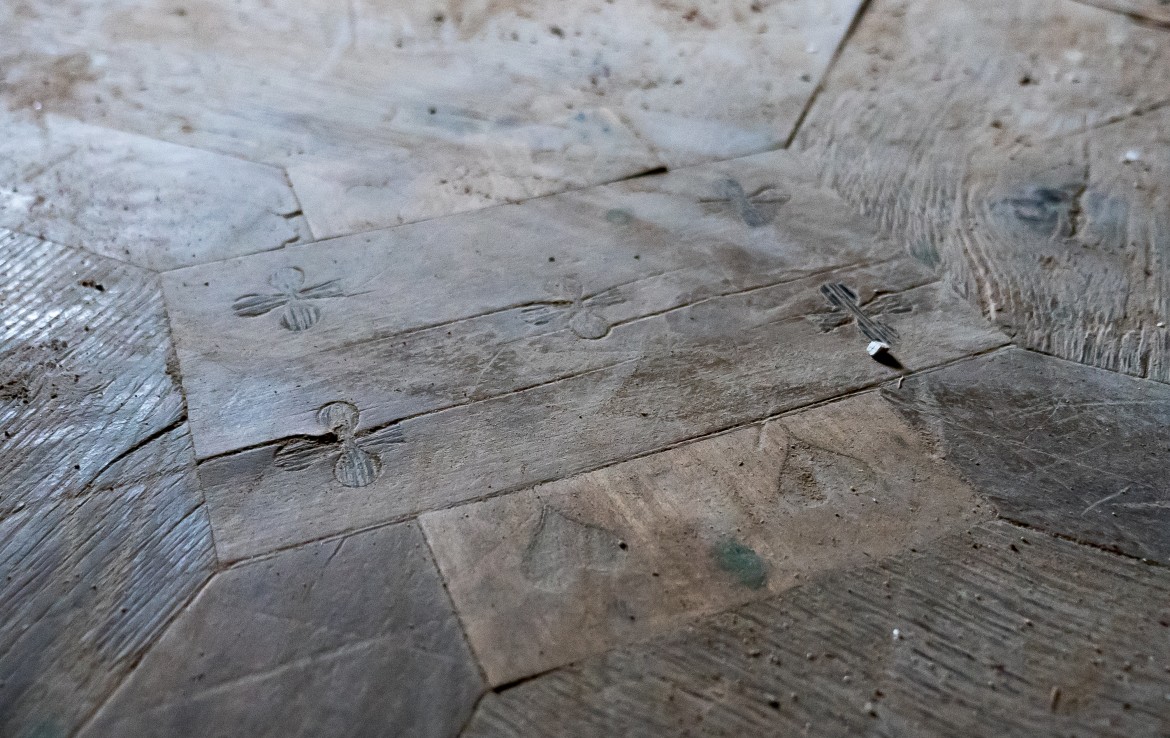 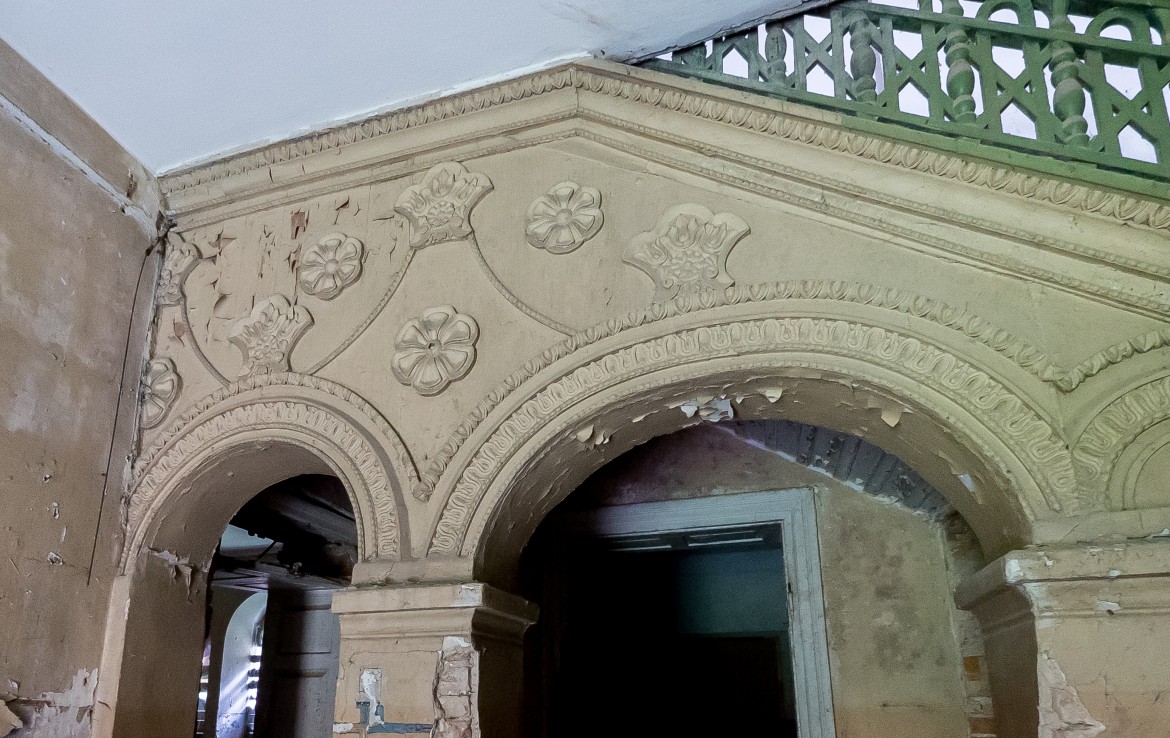 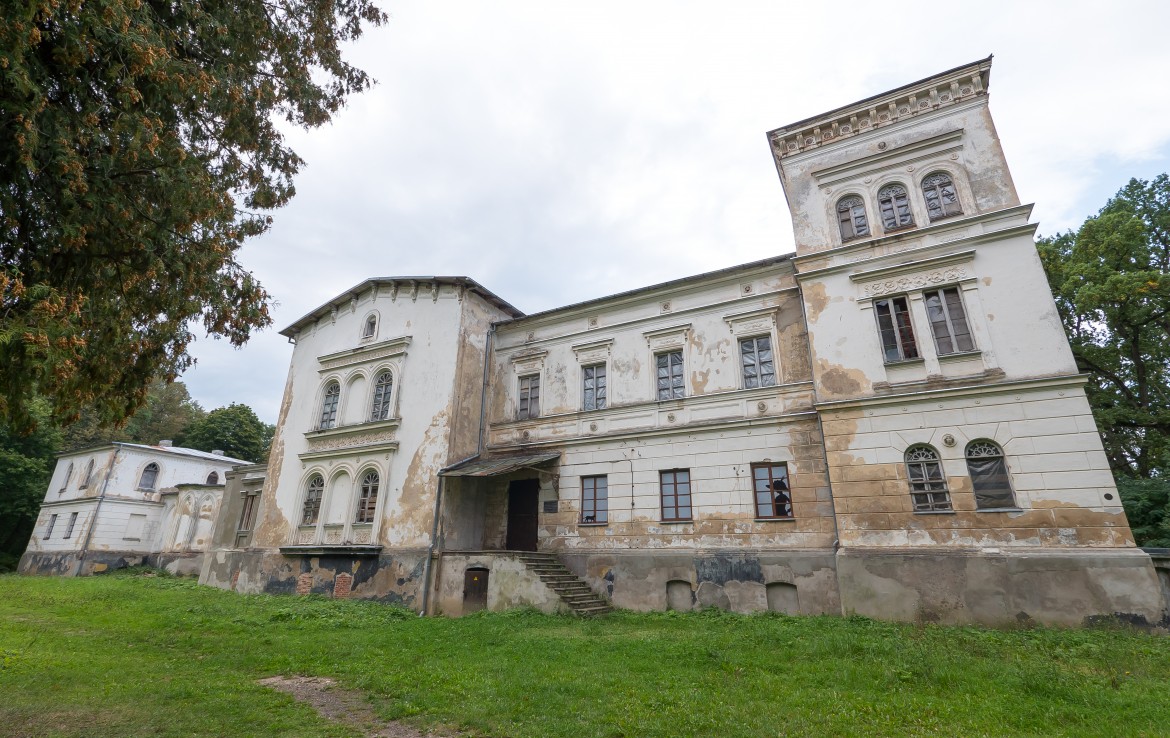 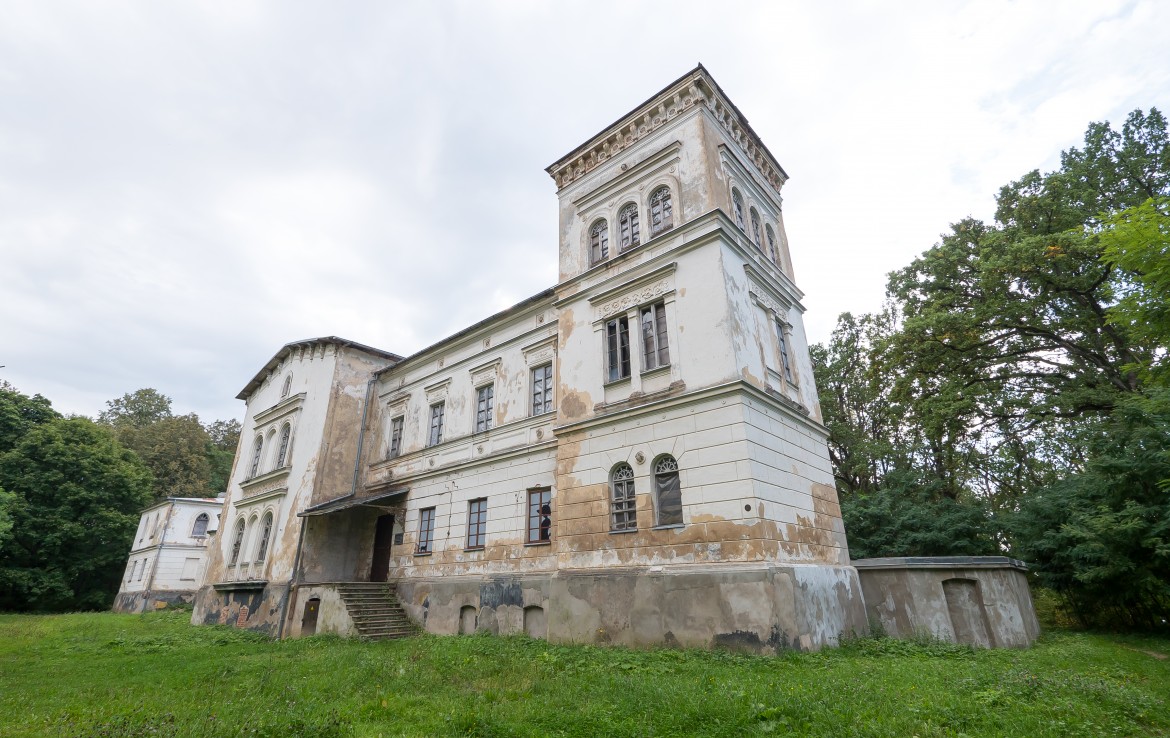 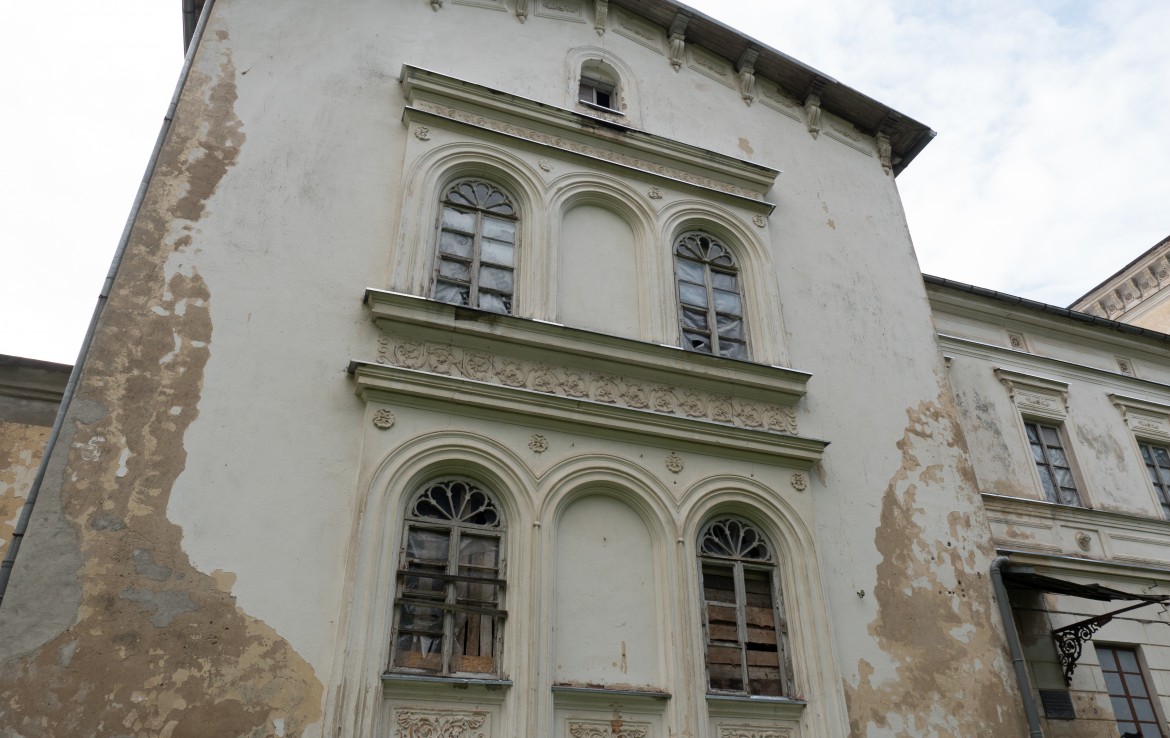 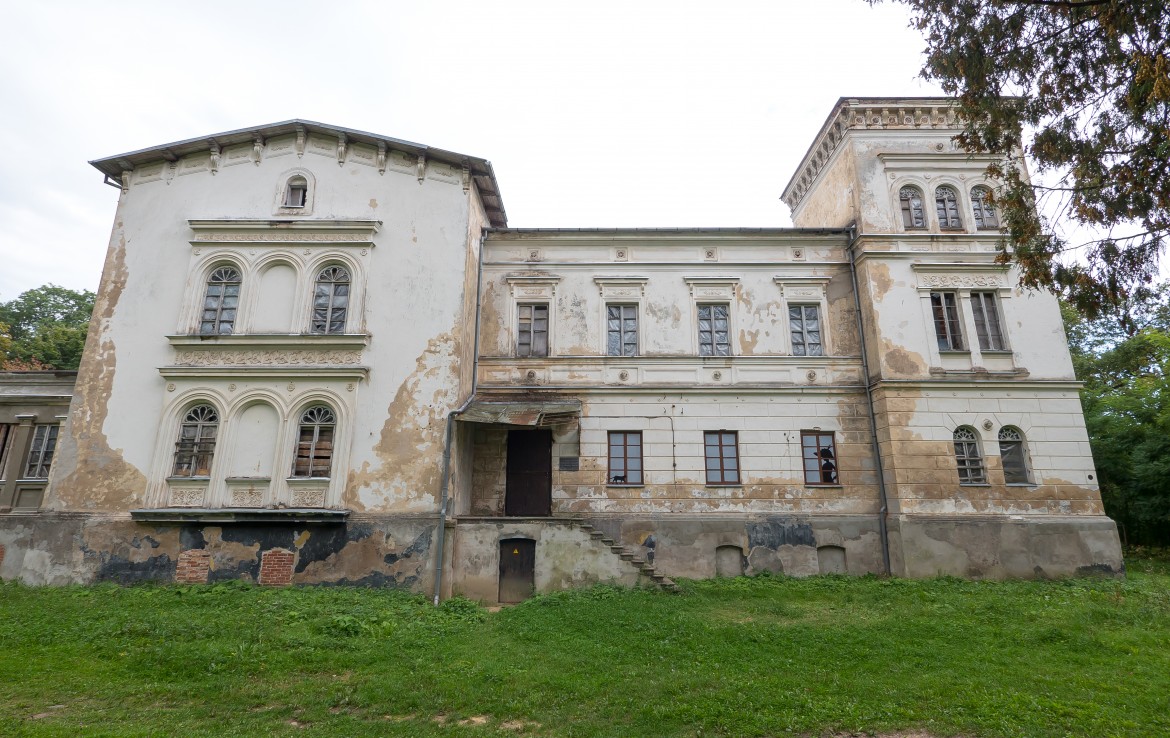 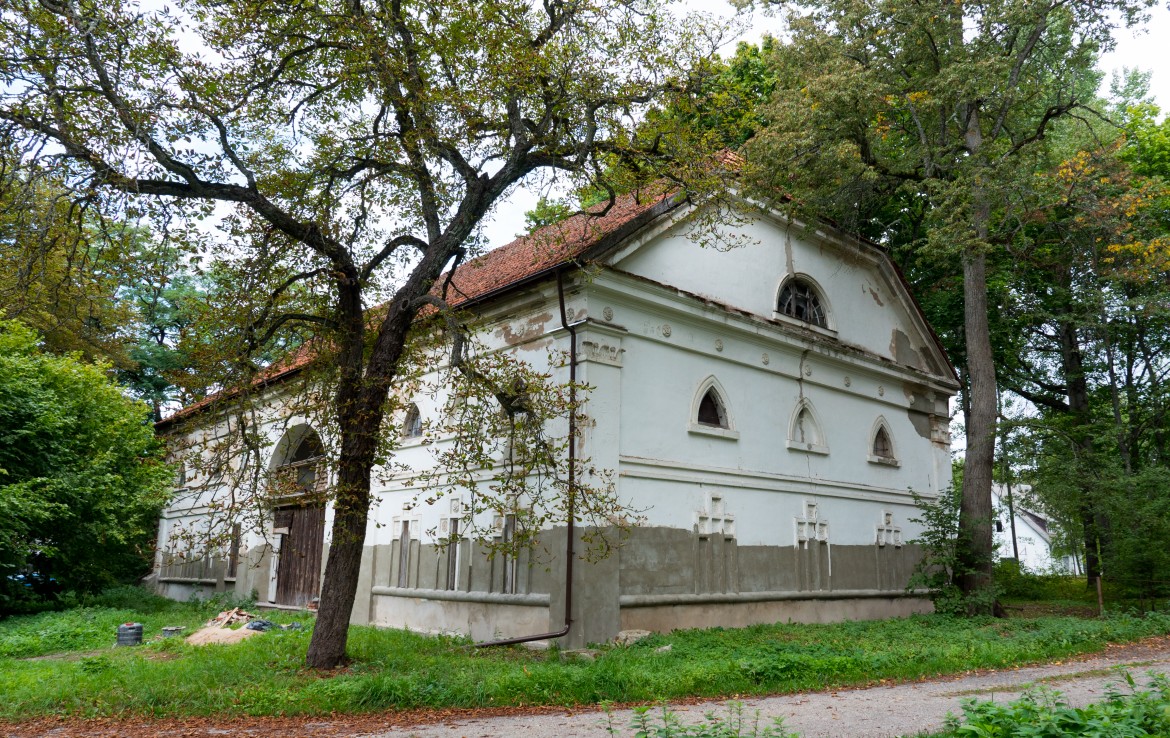 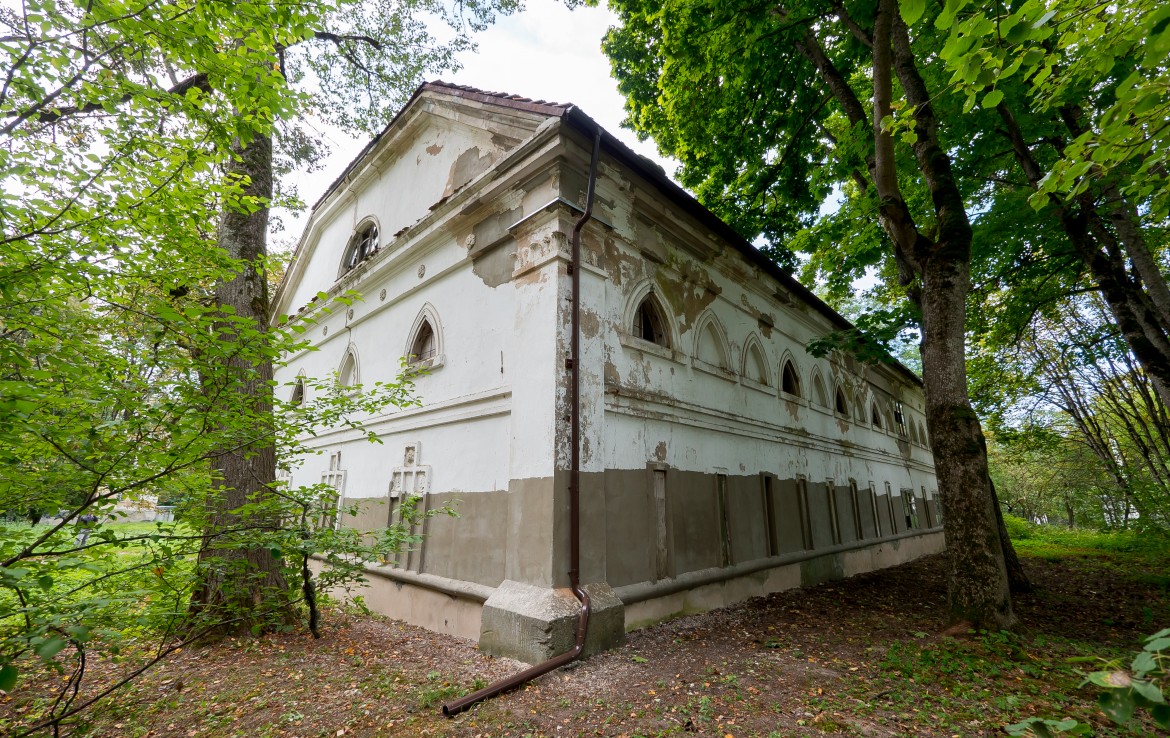 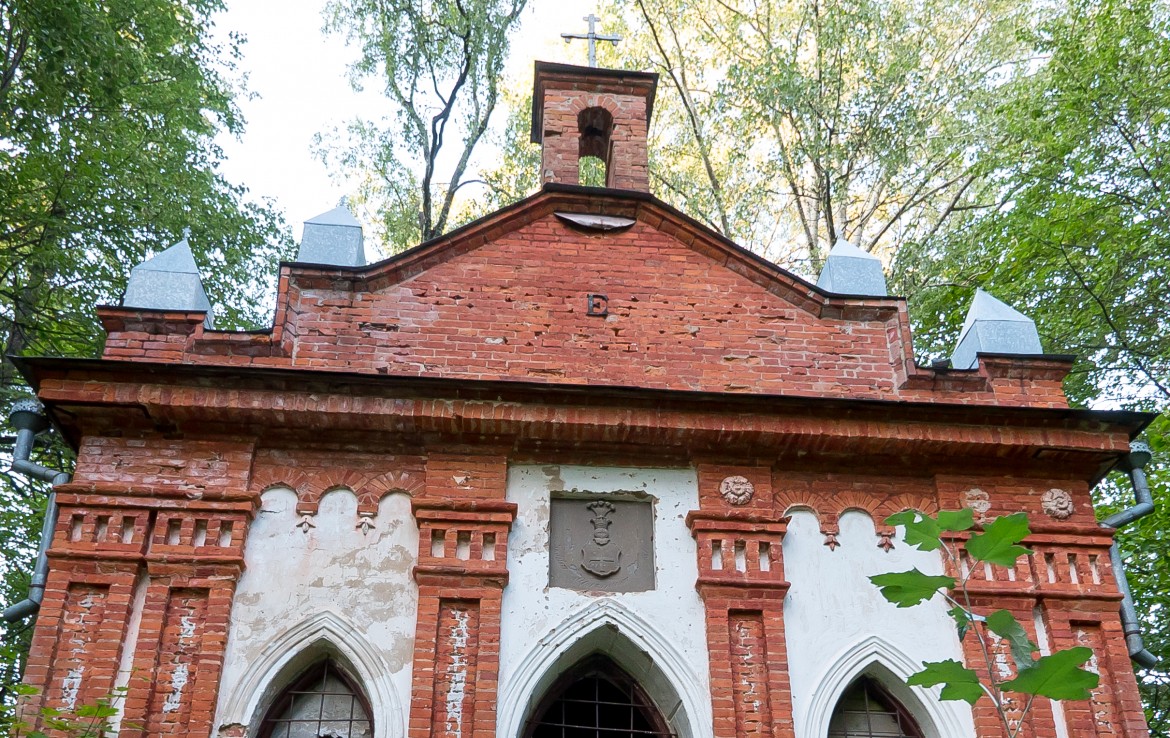 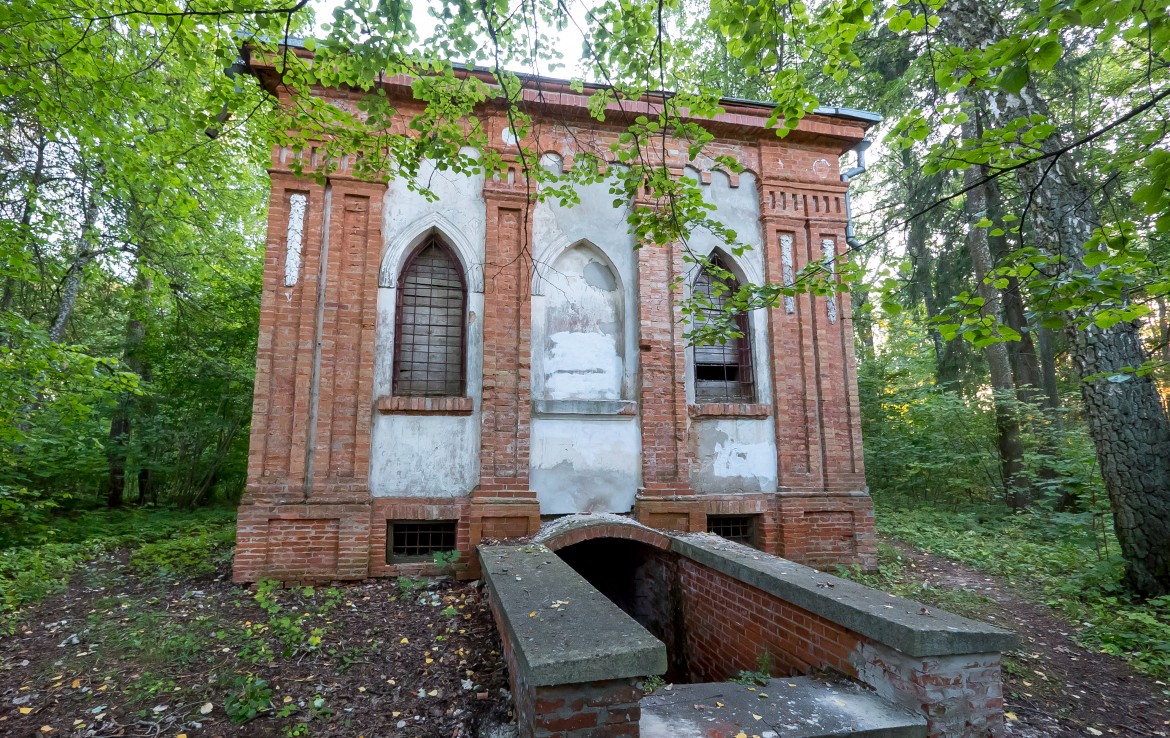 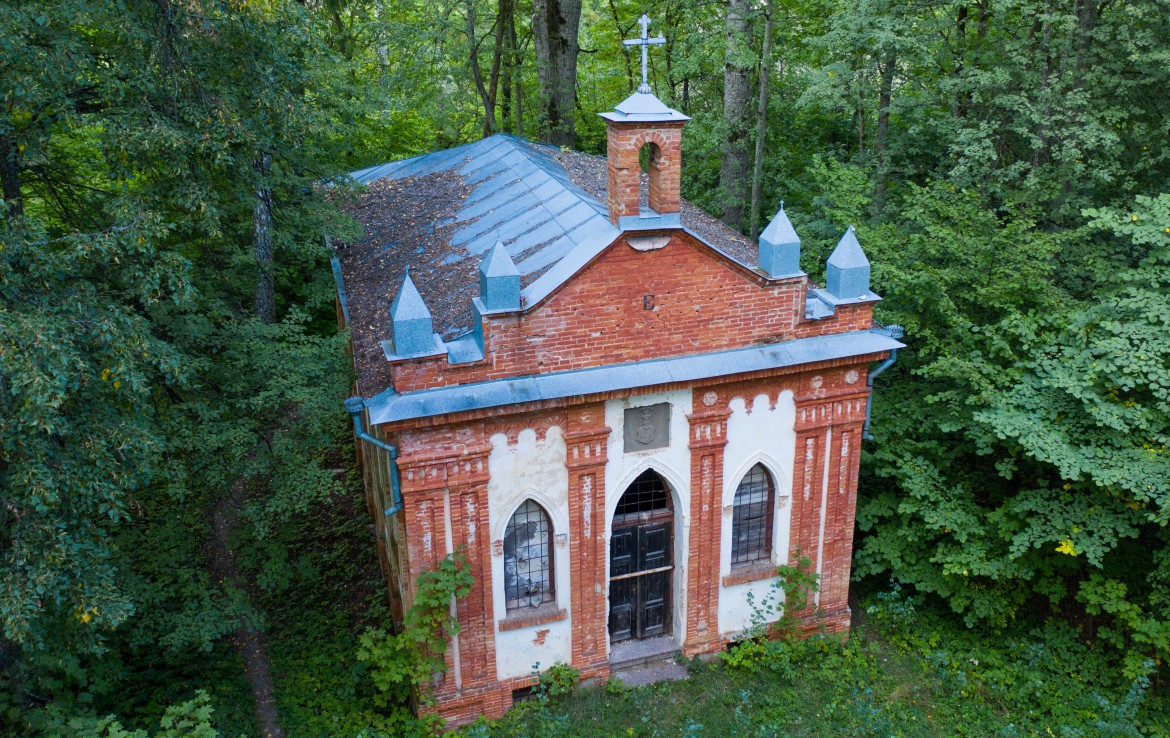