The university complex, which takes nearly an entire quarter of the capital’s old town and consists of more than a dozen buildings and thirteen yards, is an example of many centuries of evolution. Here you can see nearly all of the architectural styles, which were trendy in the capital, and probably all of the most famous architects, who worked in the old Vilnius, contributed to its development. The college, established by the Jesuit Order in 1570 was reorganised into a university by the initiative of Stephen Bathory already in 1579. As years went by, the university expanded into surrounding buildings.

Soon after the establishment of the college, the Jesuits were given the large Gothic Church of St. Johns, which, after a sequence of fires of 1738-1749, was rebuilt in the style, characteristic to late Baroque. What remains of the Gothic building today, is only a part of the interior structure, pointy side windows and several of the remaining buttresses. The reconstruction of the building was led by one of the most famous architects of Baroque period – Johann Christoph Glaubitz, also known as the father of Baroque in Vilnius, who has turned the church into one of the most expressive buildings of the time.

The front façade of the sanctuary creates an impression of a wave, shaped by protrusions, arranged on different planes, forming the vertical division of the building. These protrusions are rather laconic on the first section of the façade, highlighted only by a vertical finishing and a classicist portal, created later. The protrusions in the second and third section transform into columns, which create an impression of sleekness for the segmented forms of the façade. The pediment, which takes two sections, is an even more characteristic feature of the late Baroque, combining the use of rounded shapes and broken elements, a volute motif and harmoniously integrated sculptures. The façade on Pilies street is as impressive, featuring a curved, wavy pediment, richly decorated with plant motifs and sculptures, with a small bell niche in the third section. The memorial plate for the family of Chreptowicz, which is a yet another element of small architecture, carrying the message of Baroque, is on this side of the building as well.

Only ten out of the twenty-two initial altars that decorated the main part of the sanctuary were left after the reconstruction in the 19th century. Many architecture researchers refer to the complex of altars on the presbytery side as one of the most impressive ensembles of this style in the entire country. The altars reflect the expressive shapes of the late Baroque. What complements the church interior even more is the 18th century sculptures, created by Johann Hedel, and, if you look up, above the great altar you will see an uncovered example of Baroque vault painting – the mural of the beheading of St. John. The wavy organ balcony was built a little later – in the middle of the 18th century – by another famous architect Tomas Žebrauskas.

According to data, the belfry of the Church of St. Johns, which is the highest in modern-day Vilnius, acquired its current shape after the same fire of 1737. The belfry is massive and static, compared to the architecture of the church, and predominates the landscape of Vilnius Old Town. The heavy shapes of the three lower sections are slightly softened by the side columns on the fourth and the top section, which is notably thinner than the rest, highlighted with rounded corners, protruding diagonal pilasters and a cornice, which frames the form of the volume and also emphasizes the curve of the window. The top two sections are also highlighted by vases, characteristic of Lithuanian Baroque, while the sleek helmet is emphasized by a composition of lucarnes, which create as if an additional section.

Looking for Baroque among the numerous architectural styles of Vilnius University quarter, one may notice a slightly similar tower, rising not far from the belfry of the Church of St. Johns. Or, more accurately, one and a half towers. In 1752-1776, Tomas Žebrauskas repurposed the northern wing of the so-called second building (Universiteto str. 3) for an observatory. The superstructure of the fourth building is richly decorated with Rococo ornaments, which turned it into one of the most ornate buildings of the ensemble – the White Hall for sky watching was established here. The towers were completed in 1773 by an Italian architect Carlo Spampani, who taught at the university. Another superstructure – the small hall – was built at that time as well.

The superstructure looks like a crown of the building, separated by a massive cornice. The expressive Rococo cornices and mouldings on the sides are framed by finishing décor and a segmented cornice on the top. Another important element – the ornate décor of Doric pilaster imitations with astronomical symbols between the windows – was created by Ignatius Eggenfelder, a famous artist of the time, in 1772. Two, slightly different Baroque towers later decayed – the eastern tower stood without its top section for one and a half centuries. It was restored during the restoration of 1995. The other tower has not been rebuilt to this day. Upon entering the White Hall in the superstructure, you can see the remaining Baroque pilasters with rounded frames and volute motifs. However, the portal at the end of the hall is from the Classicist period.

Layers of Baroque can also be found in other buildings of the university. The 11th building (Šv. Jono str. 10) features the original interior of Joachim Lelewel Hall. There was a two-storey chapel, built according to the project of the same architect Tomas Žebrauskas. Later it was divided into two floors – the murals, painted on the Baroque vault, were covered. Jurgis Hopenas (also known as the author of the interior paintings of the churches of Perloja and Lentvaris), restored them, as art historians would say, ‘with some improvisation’. The 12th building (Universiteto str. 5) features a part of the surviving Baroque plan, including the authentic characteristic ground floor window arches. Looking around the ensemble, you could find even more rudiments of Baroque period. 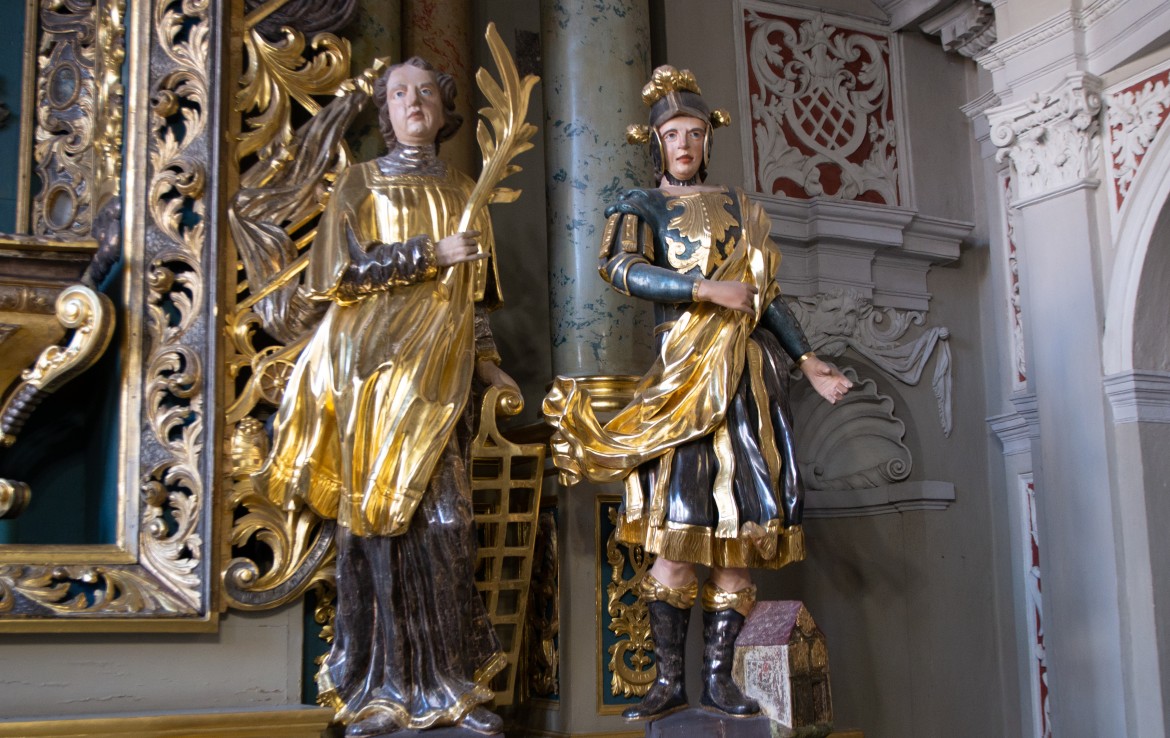 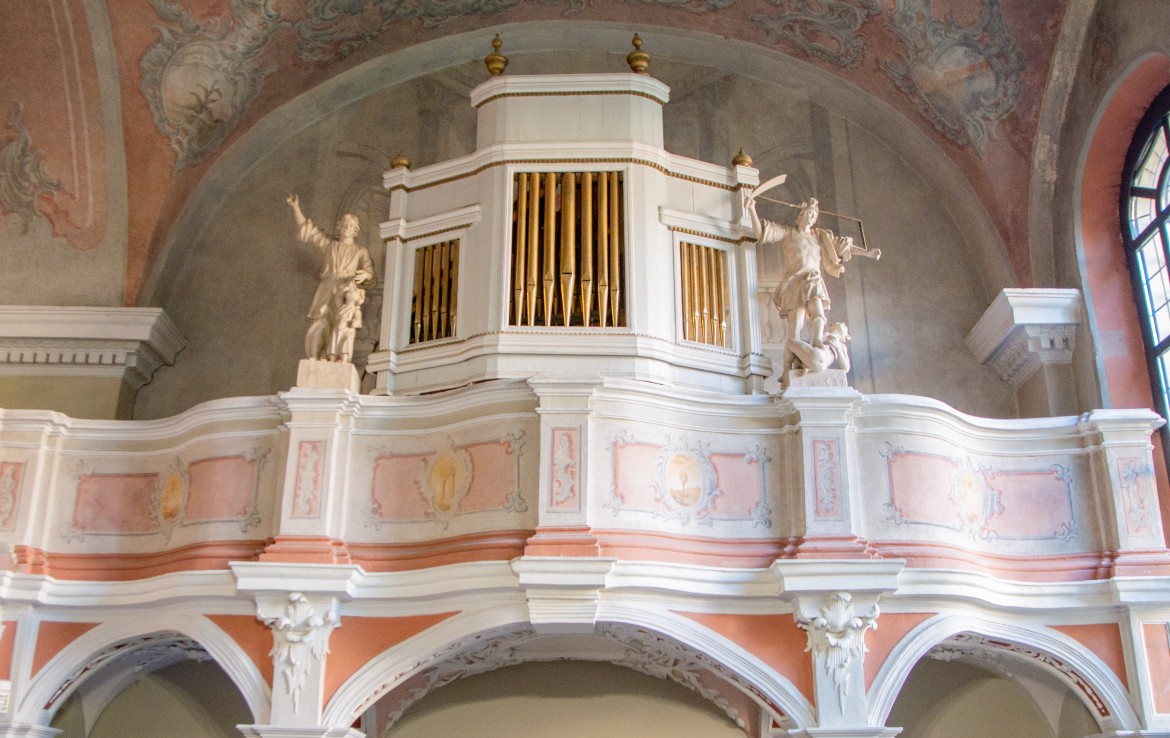 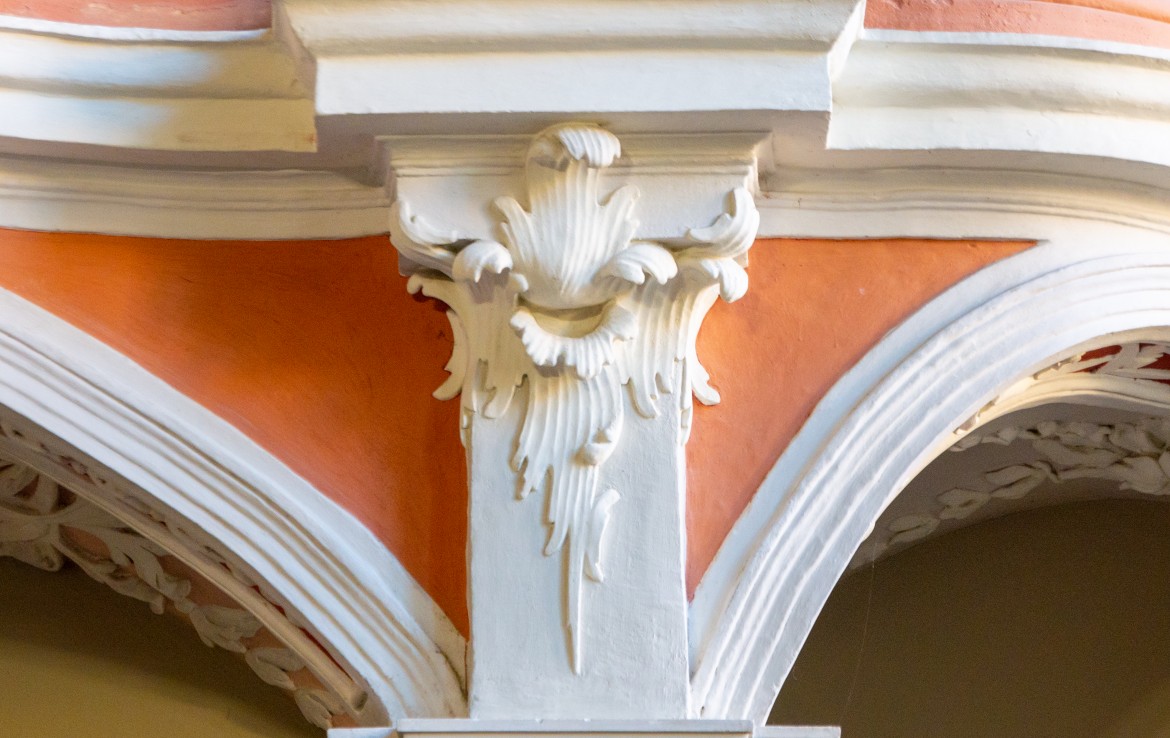 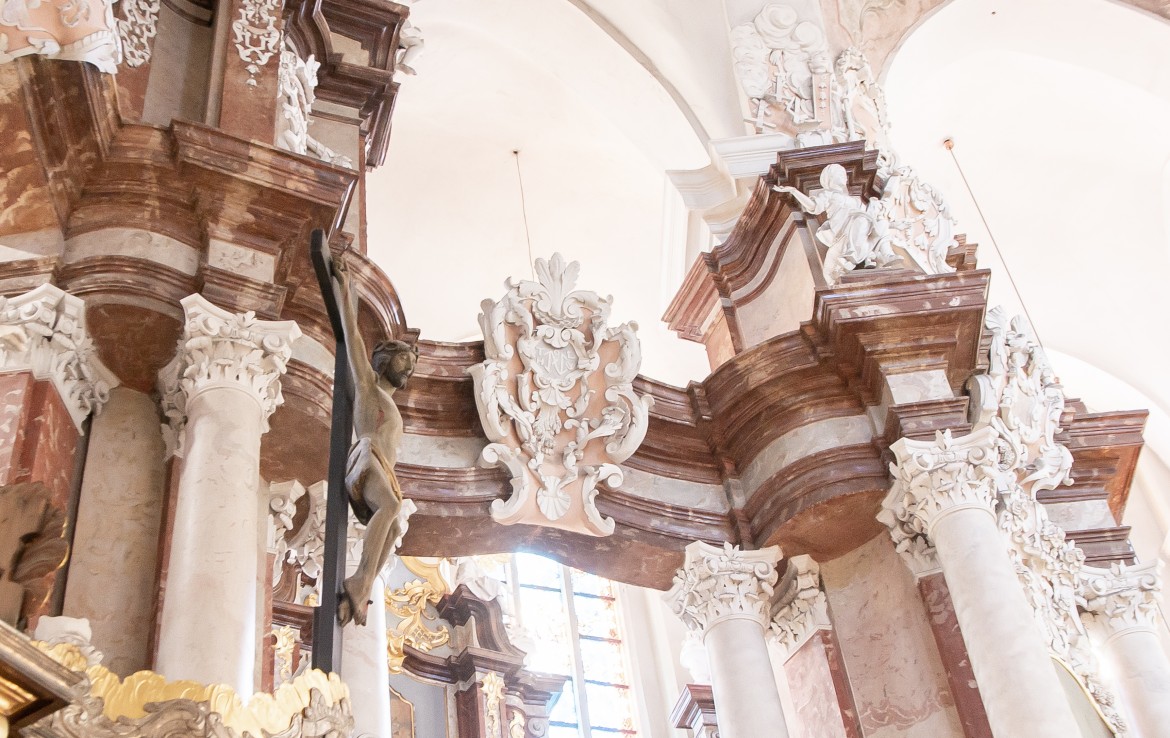 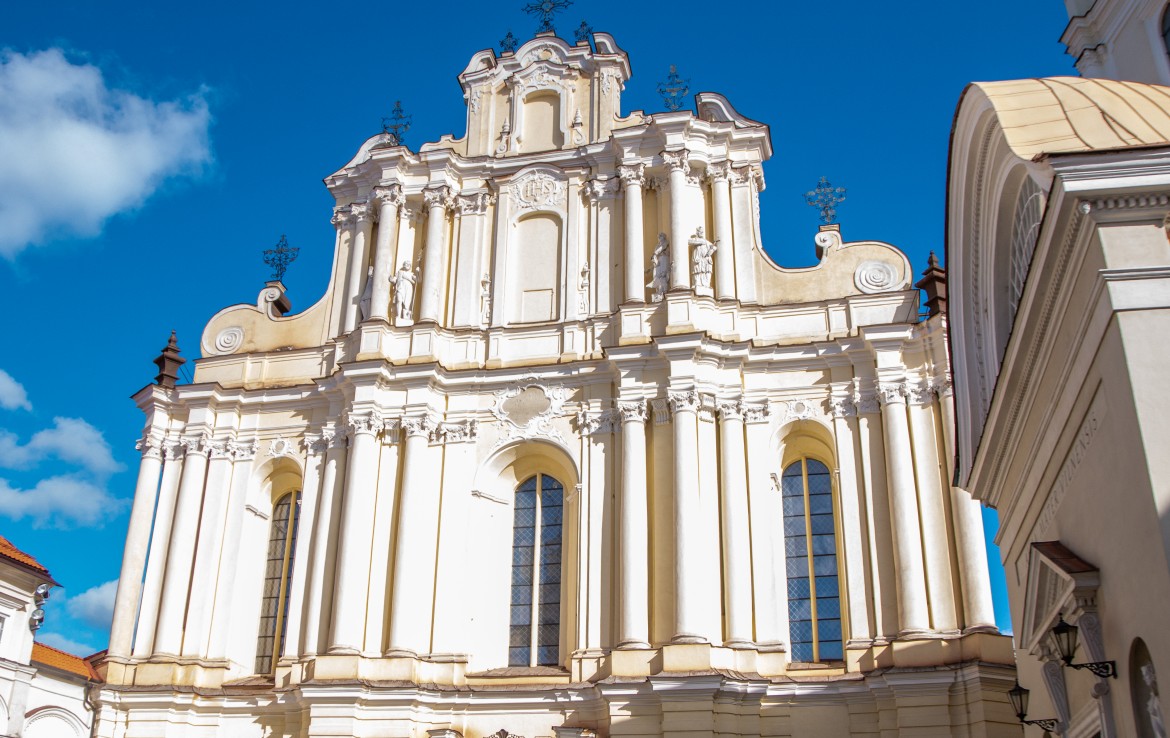 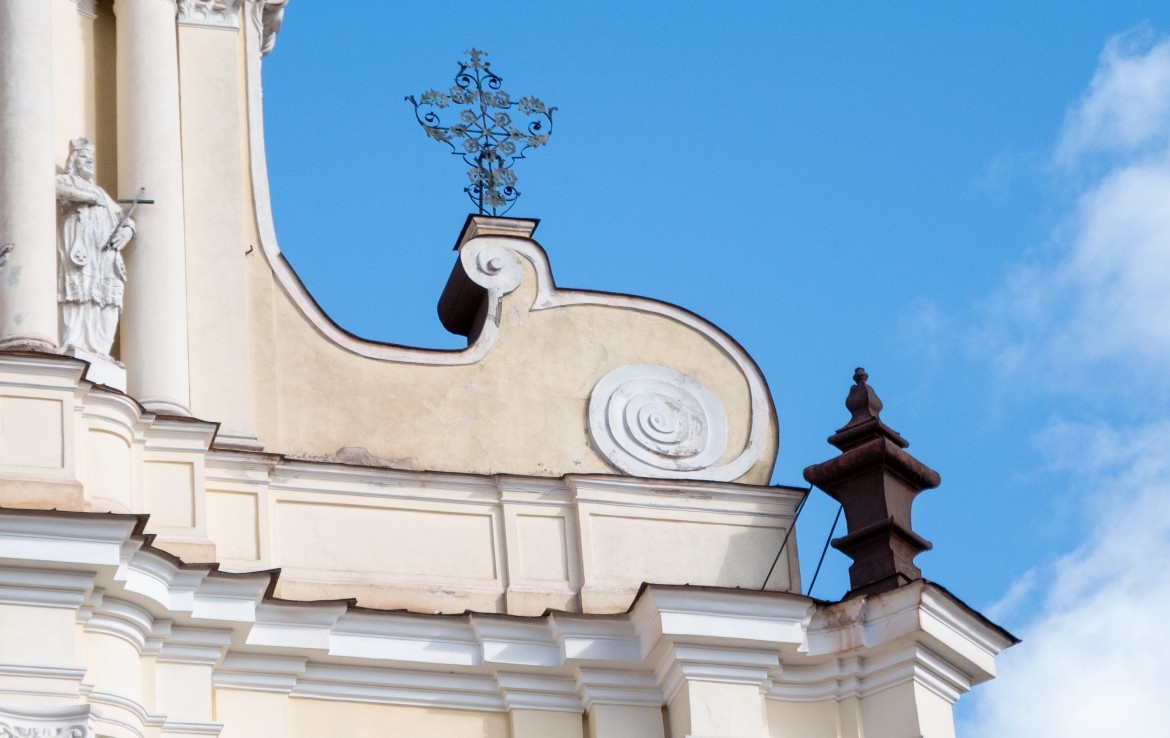 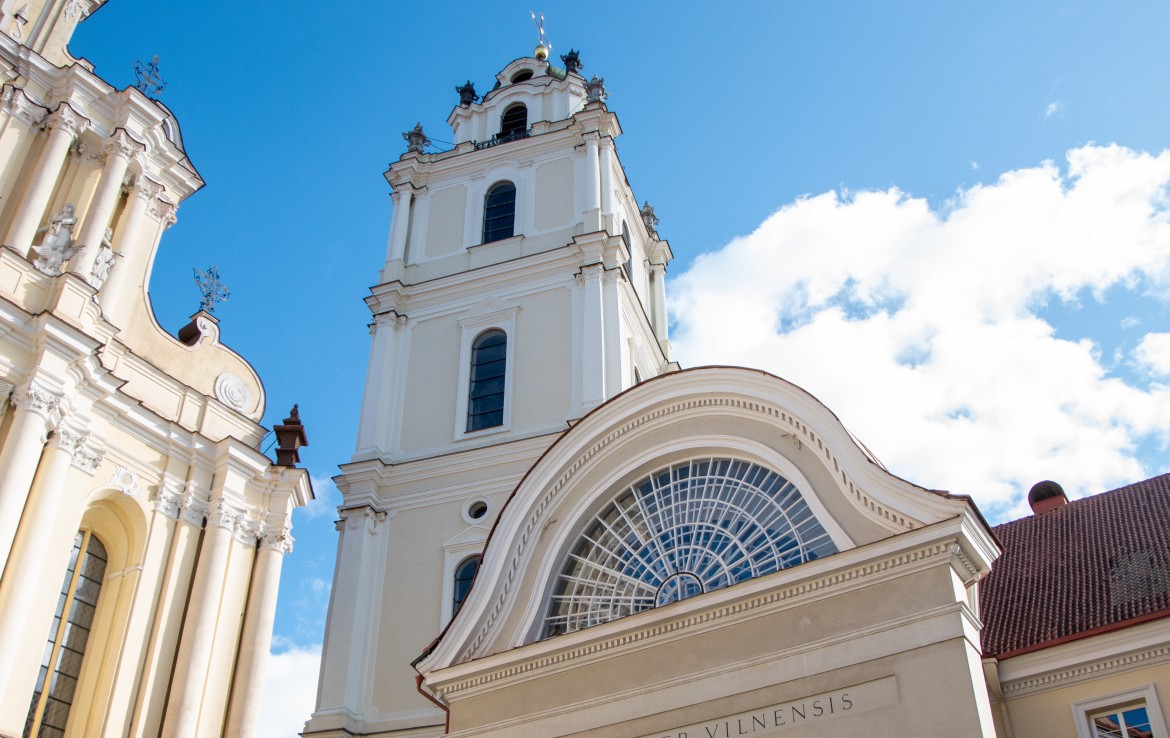 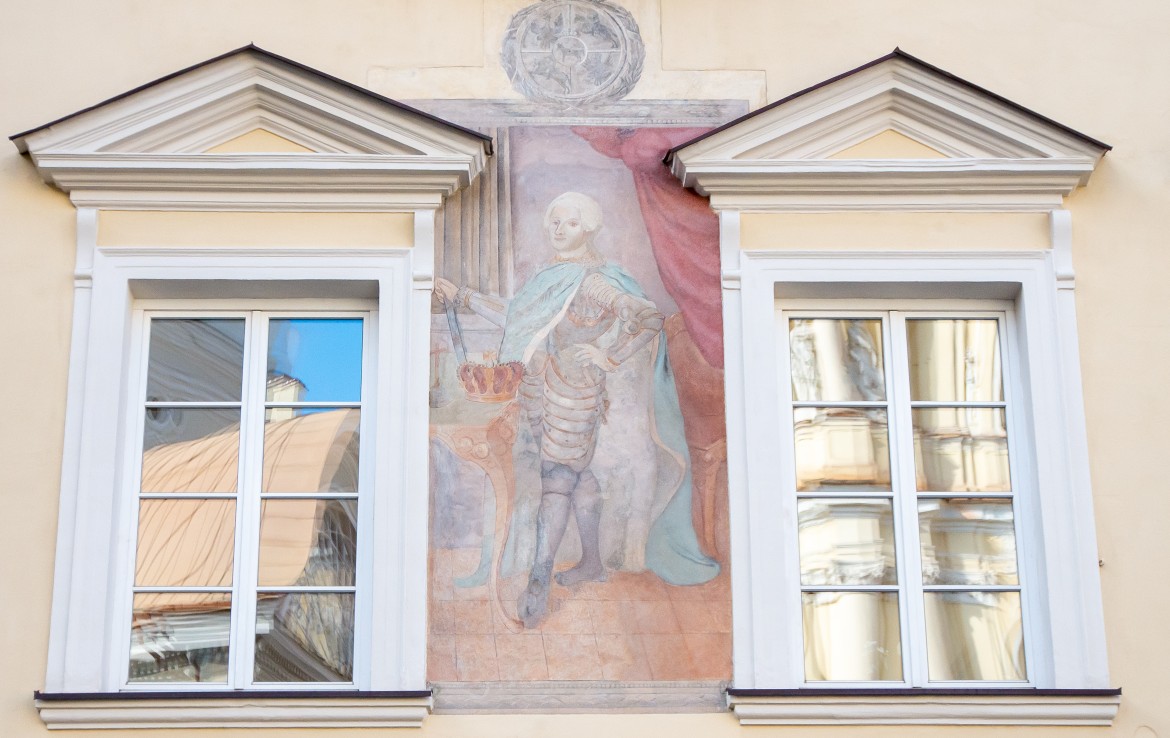 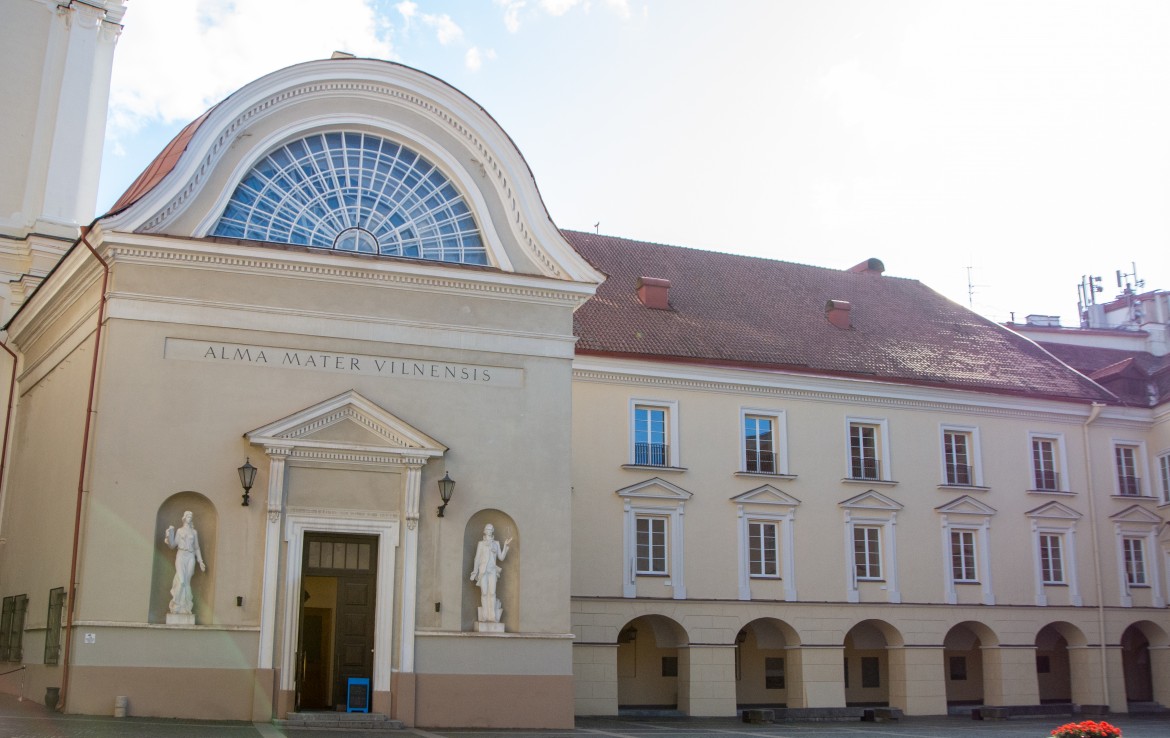 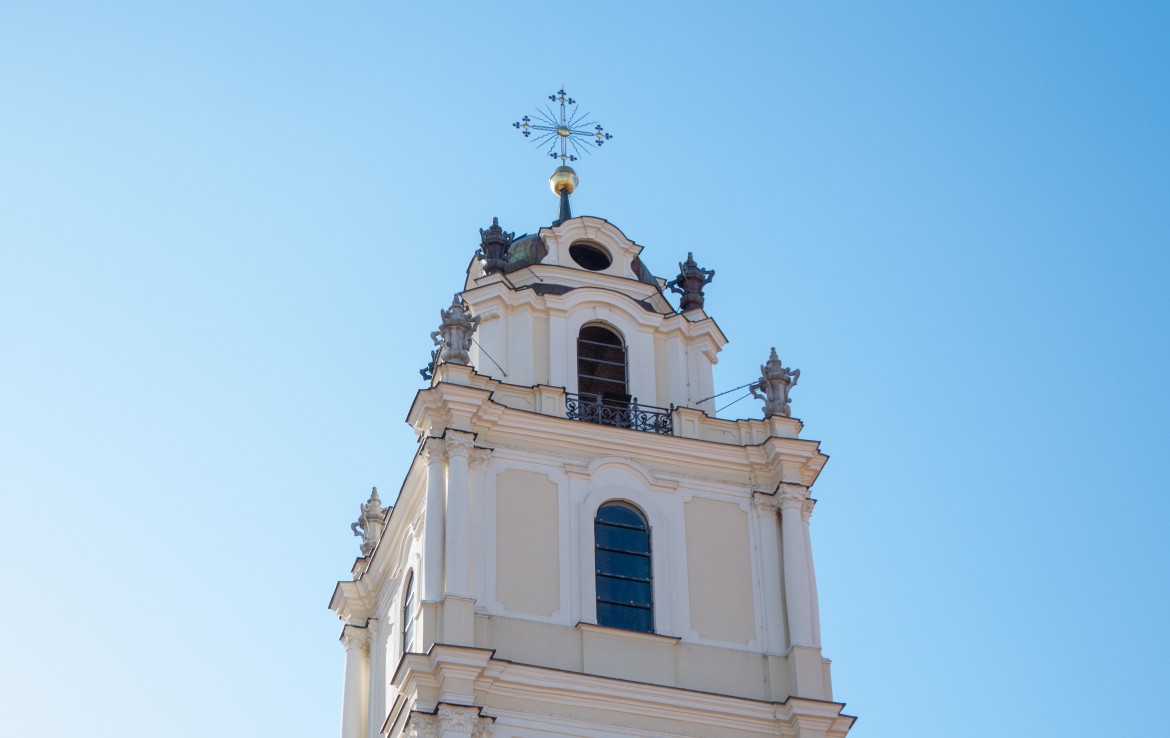 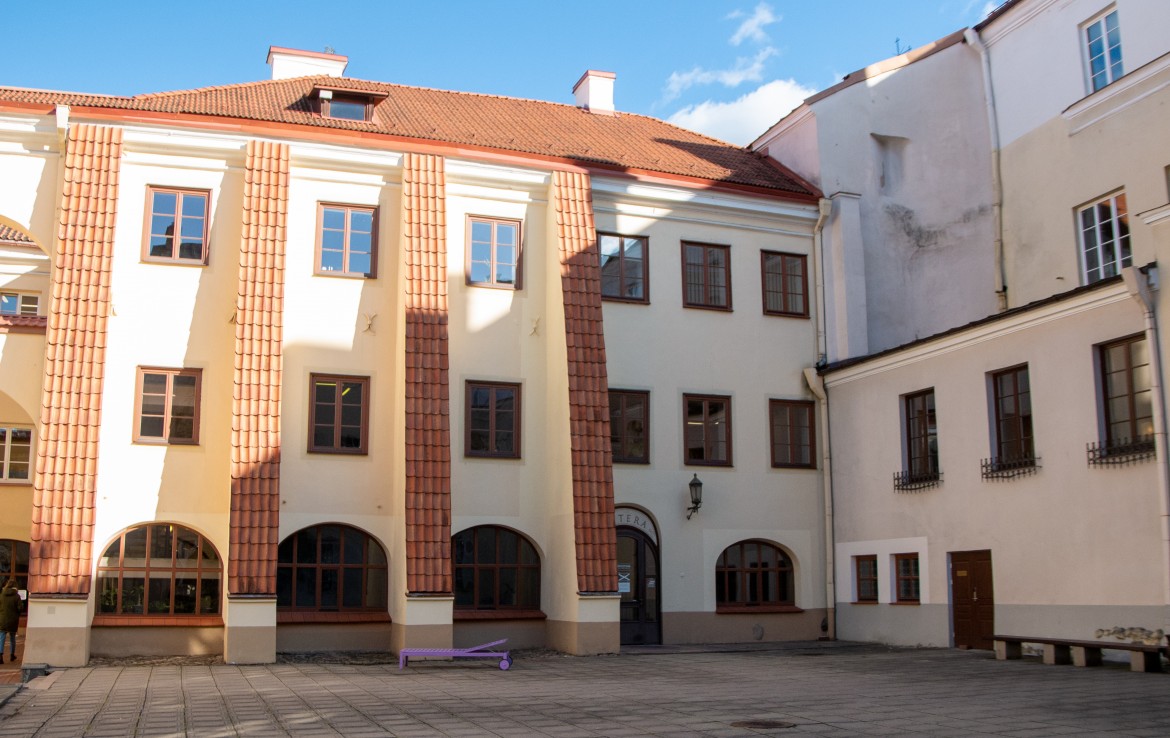 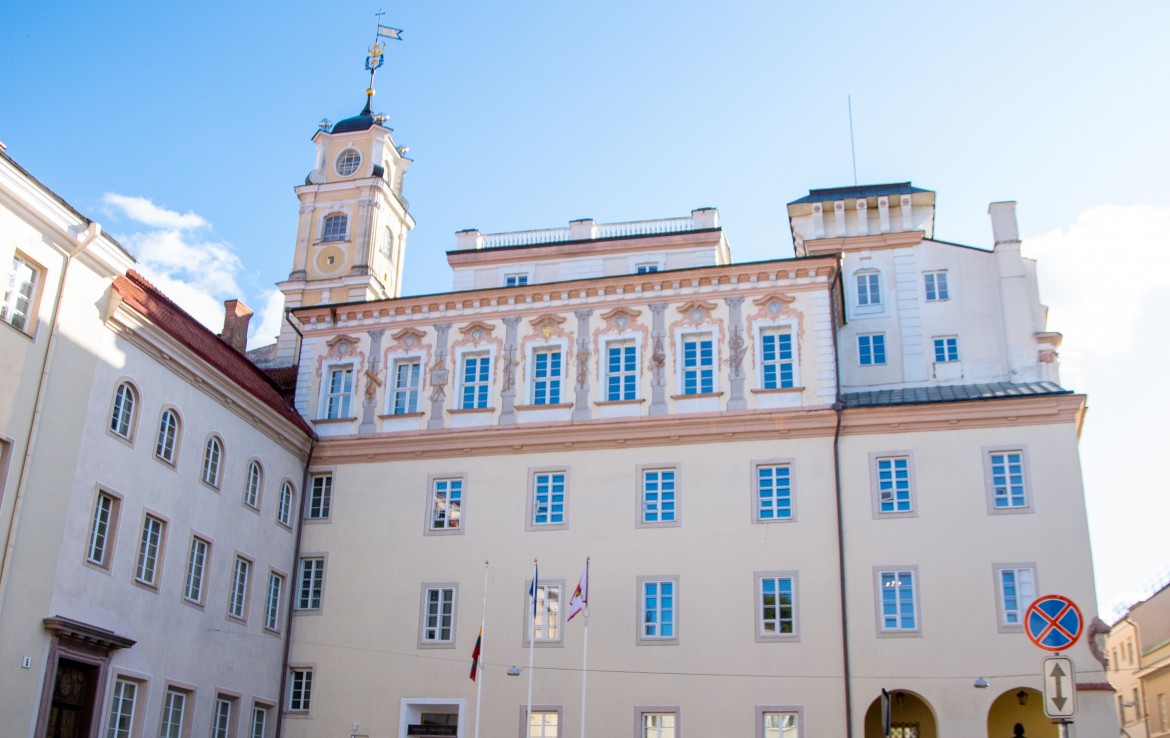 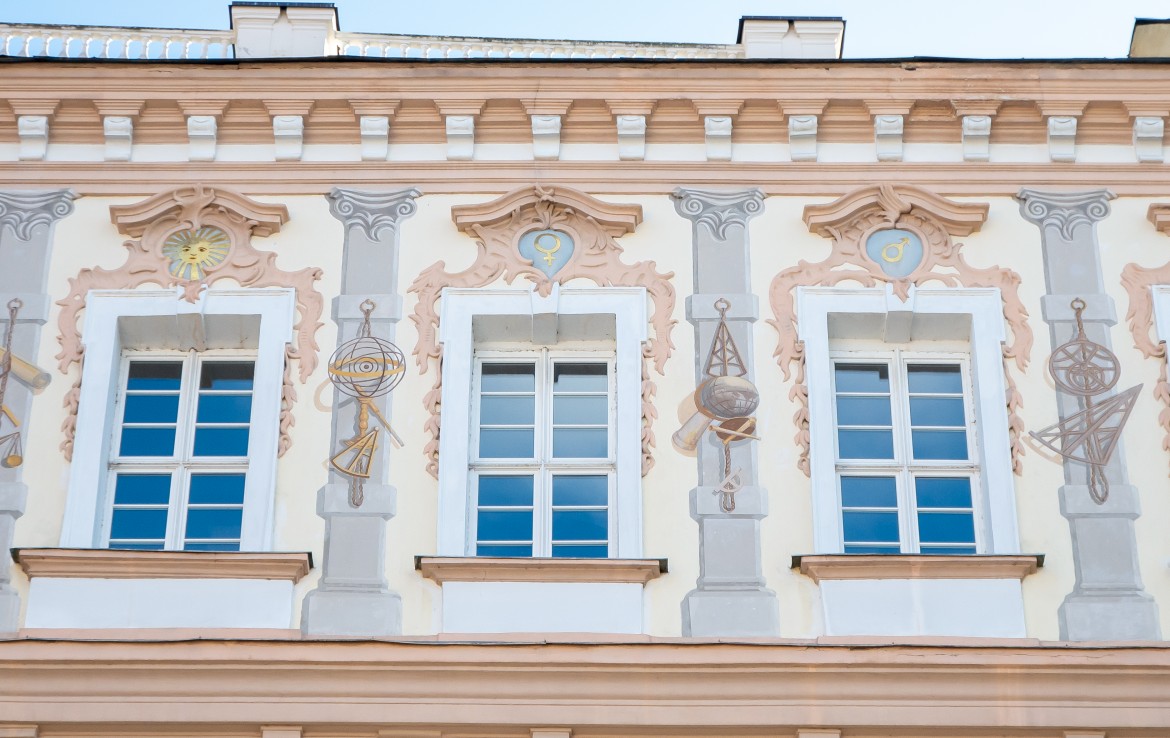 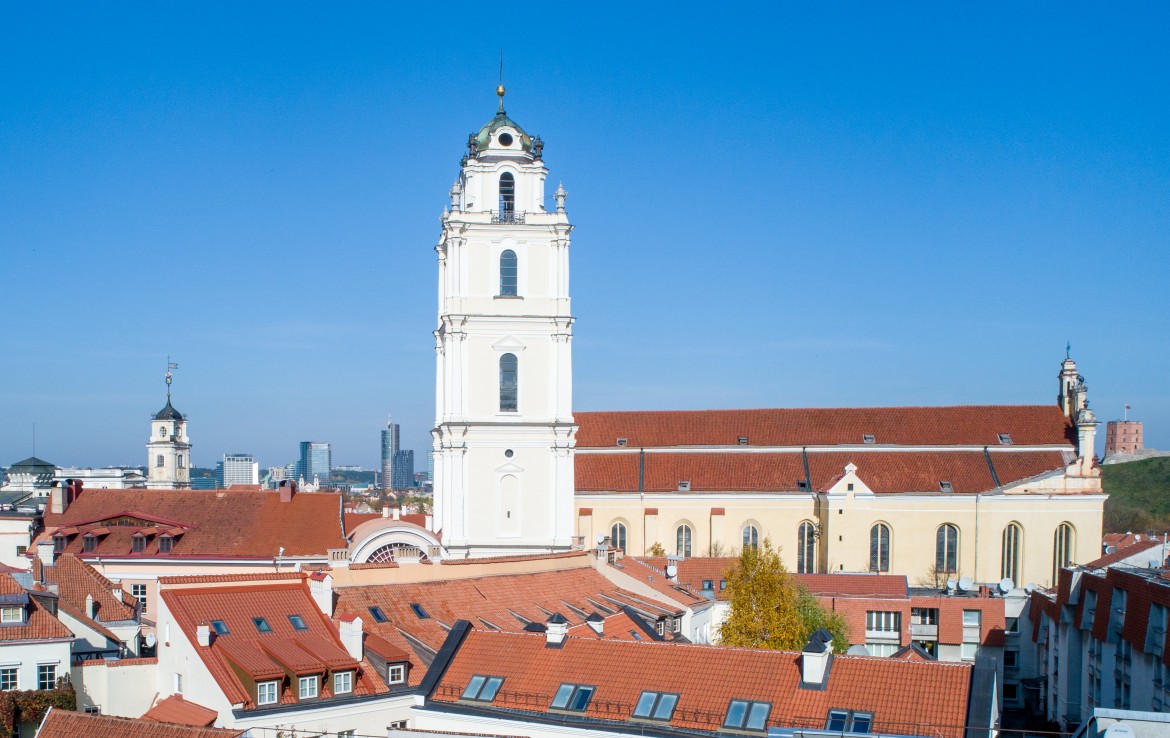 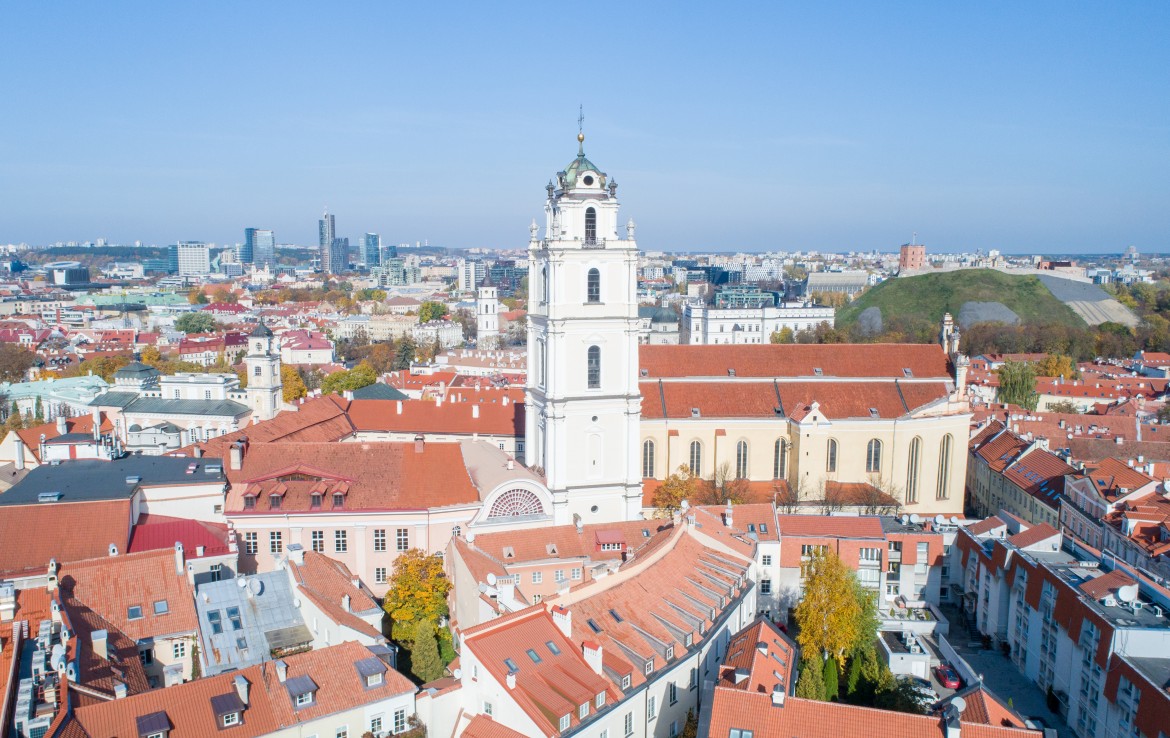 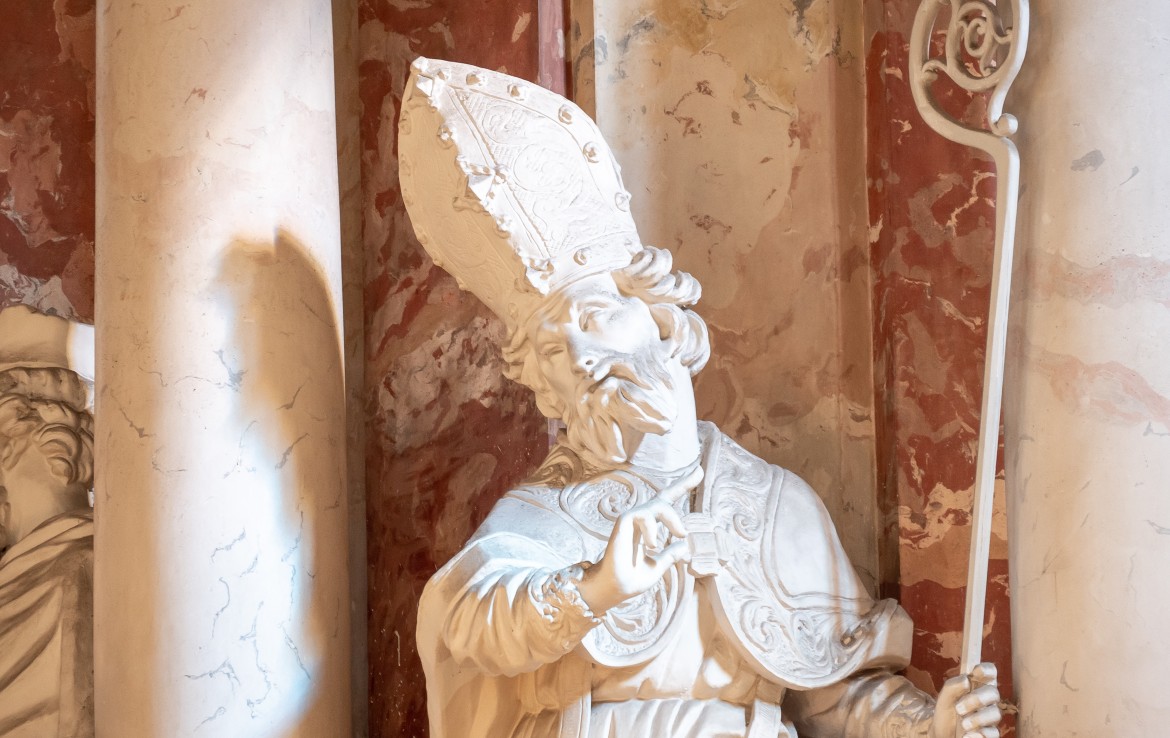 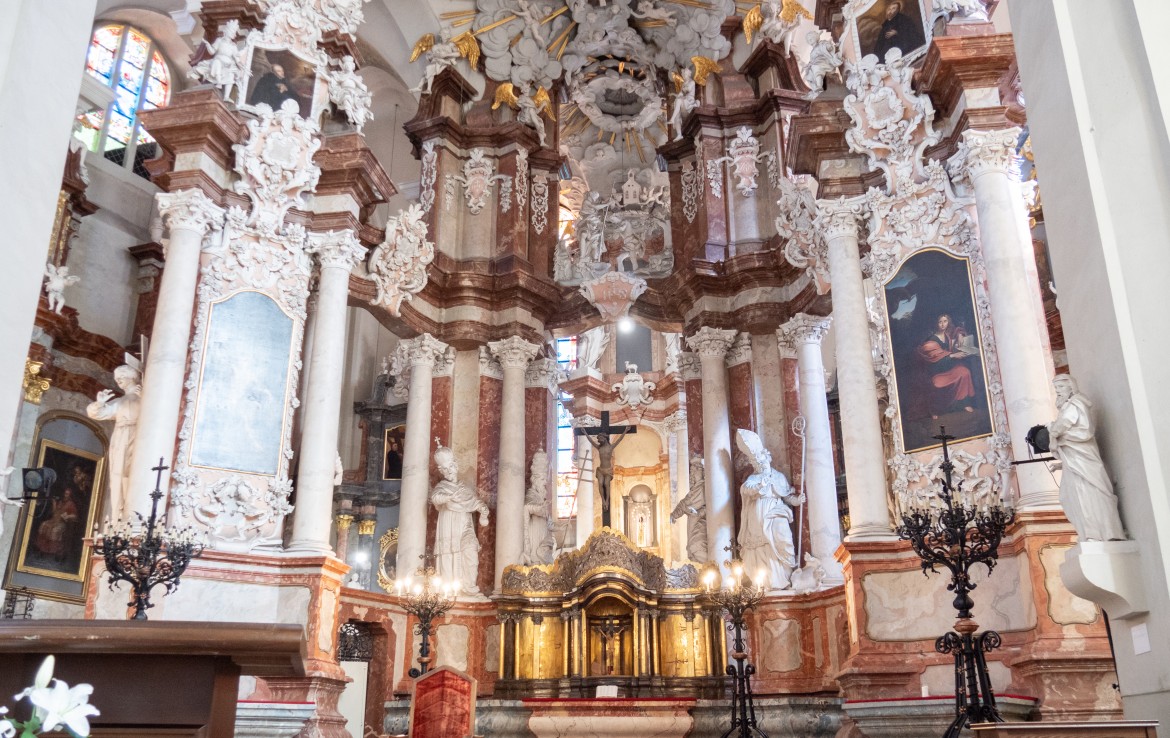 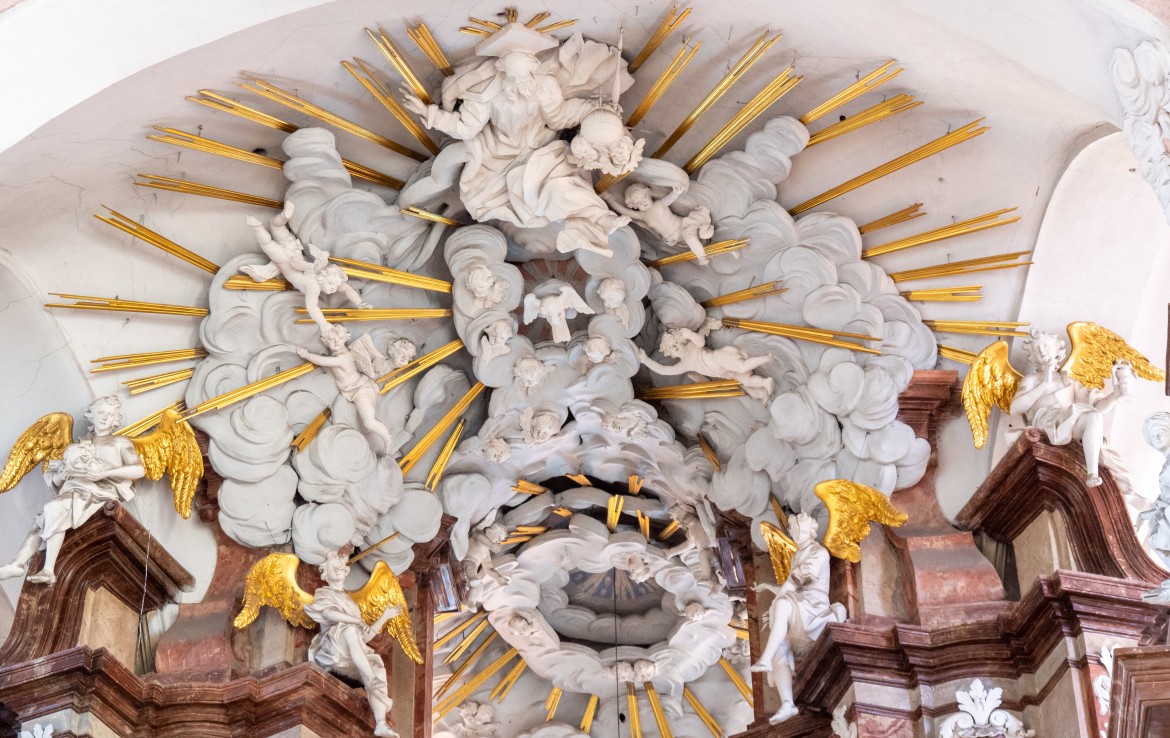 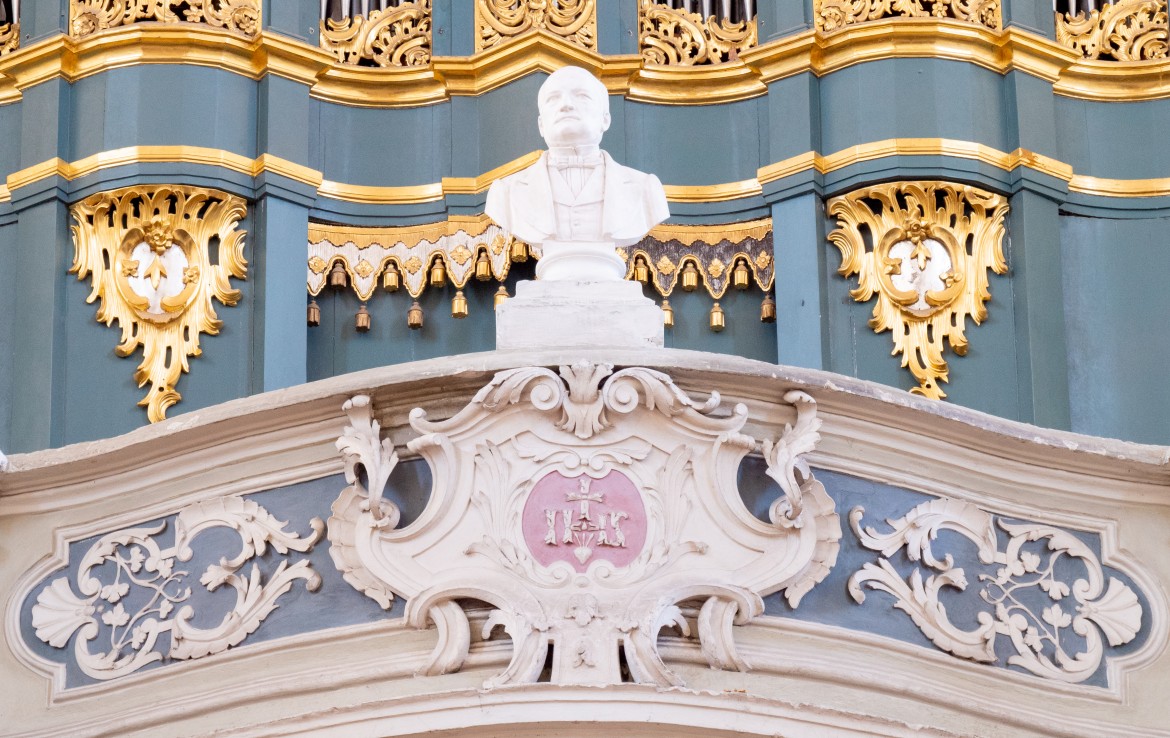 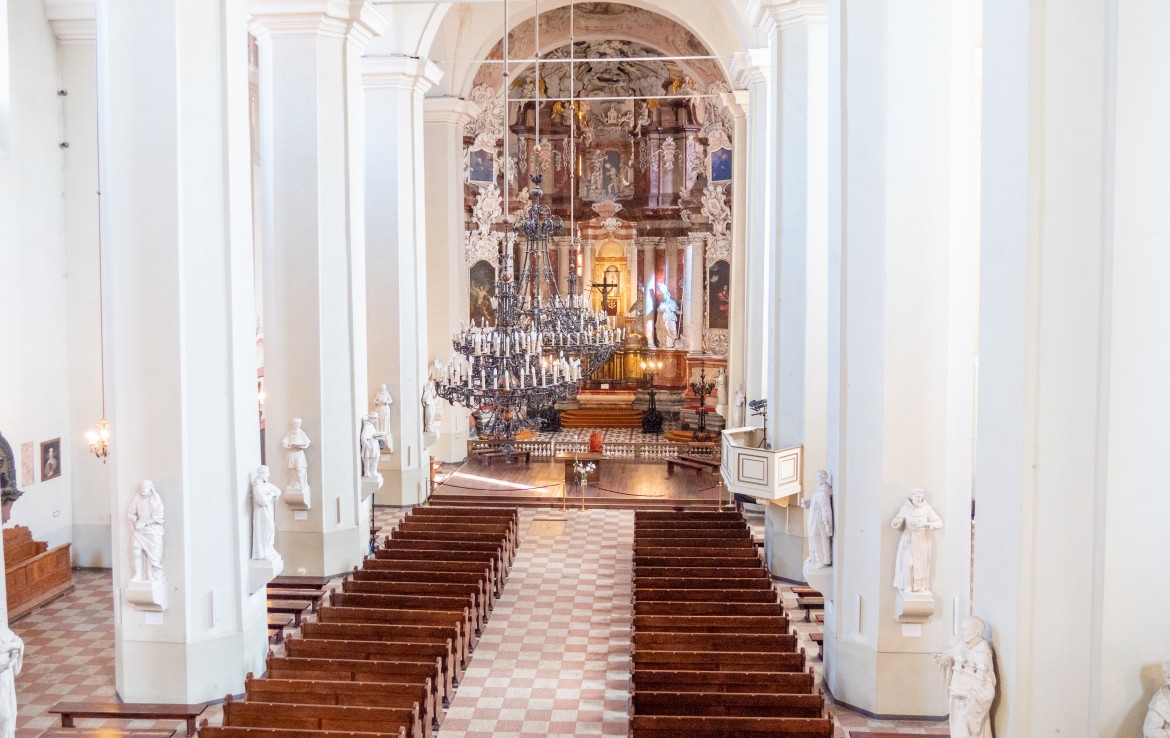 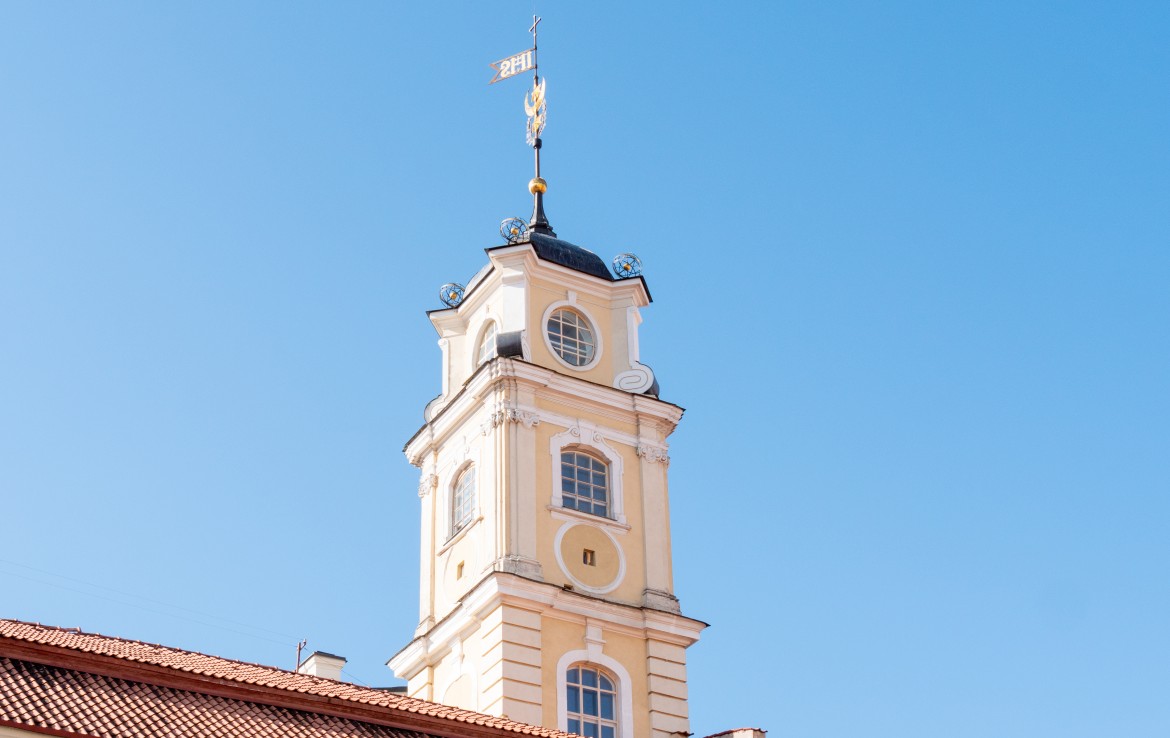 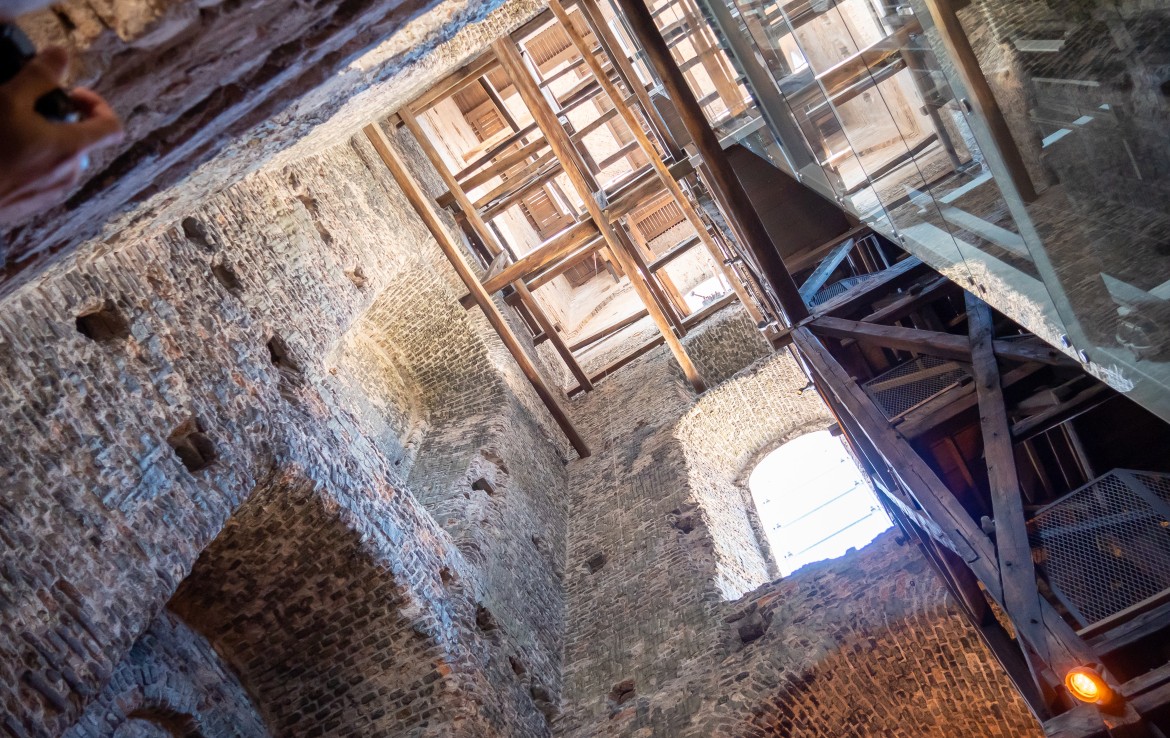