In 1879, fire ravaged the wooden church of Utena, only less than one hundred years old. In the architecture of this church, the forms of Classicism and folk architecture intertwined. The fire spared just the belfry, which was just several years old and had clear traces of Romanticism. Decision was adopted to build a new stone church in the same place. The project was drawn up before one year elapsed – the new church rose in all its stature even in 1884. As is often the case, installation of the interior pieces took rather longer – even after its consecration in 1898, while the last works were performed even in the 20th century. Among about a dozen churches, comprising the present collection of Catholic Neo-Baroque churches in this country, this one in Utena stands out, as it was planned, centrally, and as such, it is only one in Lithuania. Like in Baroque epoque, in the years of Neo-Baroque emergence in the architecture of this country, a very small number of non-plastered brick churches appeared – an exception was in Utena, Vievis or Vaidotai. The towers are slightly protruded forward, still on the sides are recessed in respect of the main volume of the church. Three-tier towers on the top on all sides end with small triangular pediments, above which – convex, quadrilateral helmets. On the sides of the prayer part, five-walled chapels protrude, while at the rear part – the apse; sacristies blocked to on its sides with slightly lower roof give diversity to the silhouette of the church.

The central part of the main facade, joining the towers, is accentuated by a portal, protruded slightly less than the towers, which is framed on the sides with two semi-round pilasters – they differ from rectangular pilasters, vertically dividing the other parts of the facade.  A rounded fascia is integrated in the plane above the door that is higher than those visible above the windows of the church – a relief composition is held there. The rounded form reiterates itself in the pediment, ending the portal on the top. Above it, the sculpture of St Archangel Michael is raised, created before the First World War by Antanas Deveikis, who was among the most famous cross makers in this region. Although the pediment is set up evenly in respect of the plane of the wide part of the facade, still the facade is harmoniously joined to the jutted portal by the ogees of Baroque forms. The ogees are set up along the height of the attic wall, while it is girded around the entire large volume of the church, still just on the main facade its planes are not blind – small windows with wide, simple form trimmings are integrated here. The attic is joined to the bottom tier of the facades by a tall entablature. The main accent of the church– a cupola, above the supposed lantern of which, a high spire rises. No such a solution exists in the old Baroque churches in this country. The inside of the church shows much less unity in style – although structural element of Baroque forms can be seen here, still, in both the decor and execution of equipment eclectics dominates. 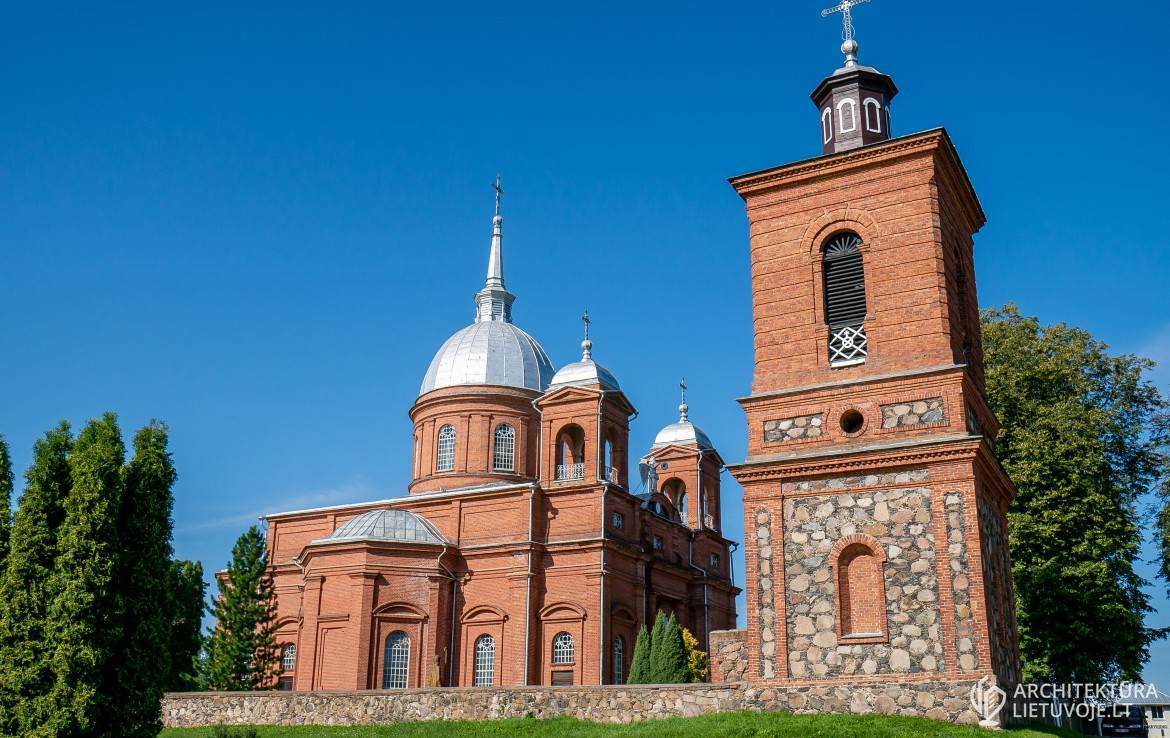 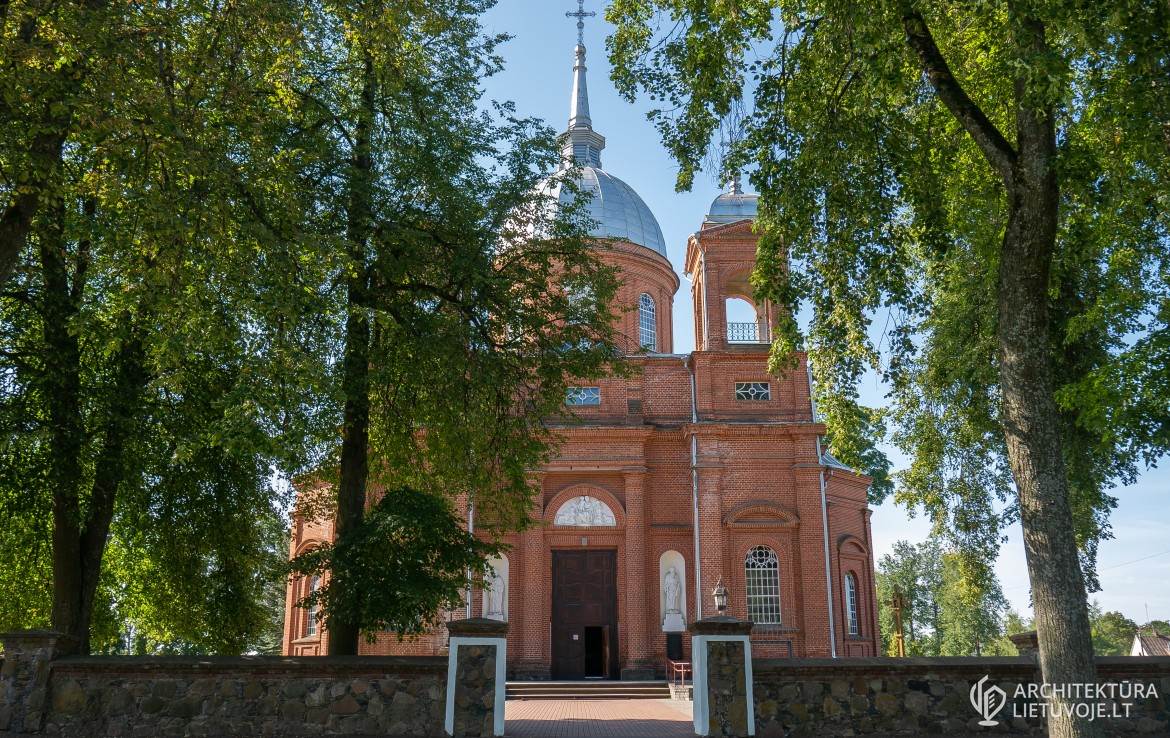 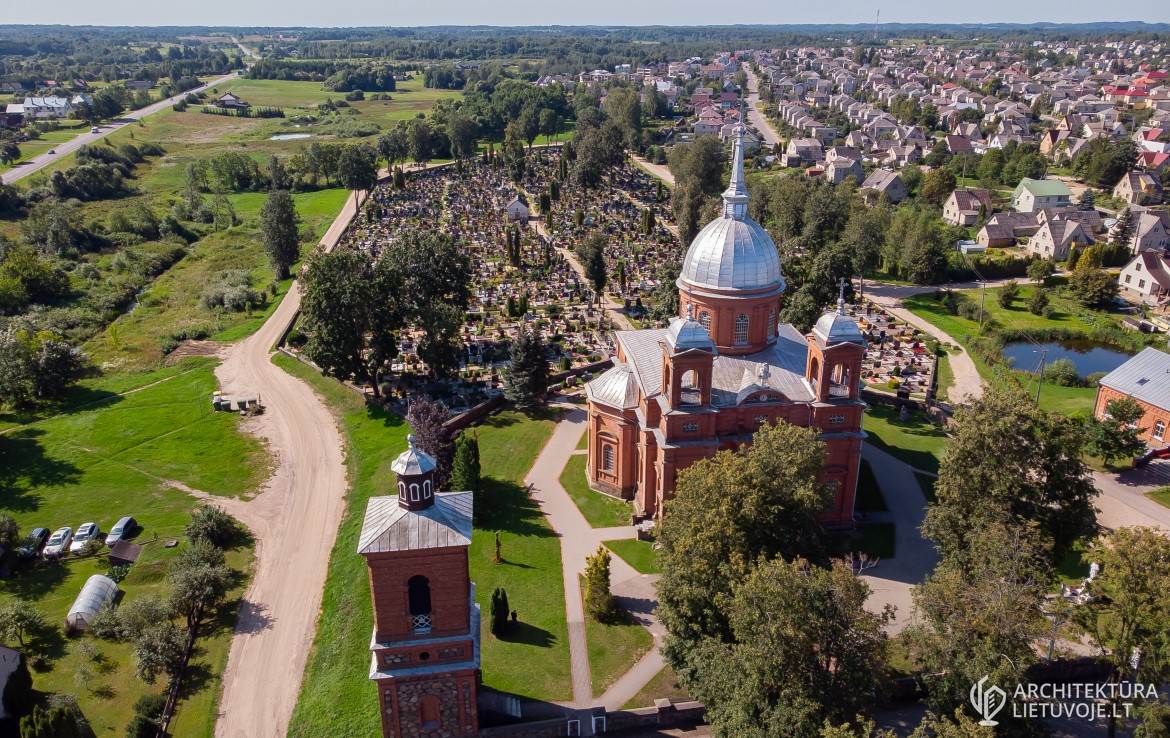 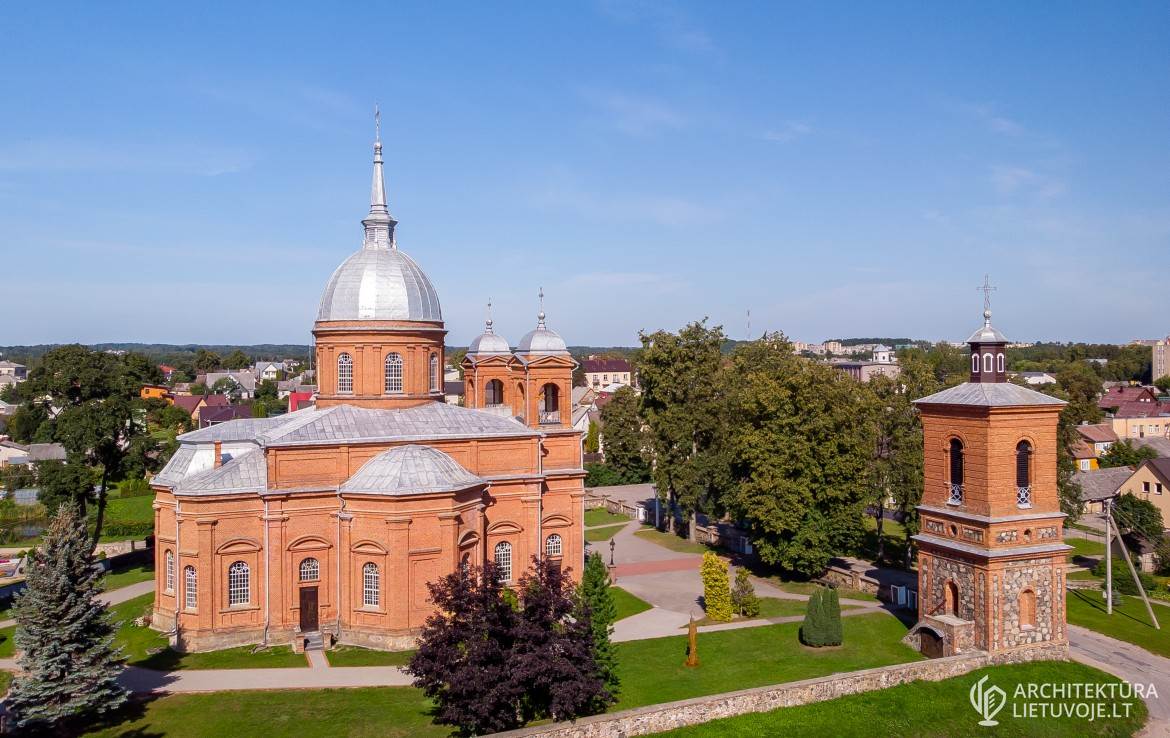 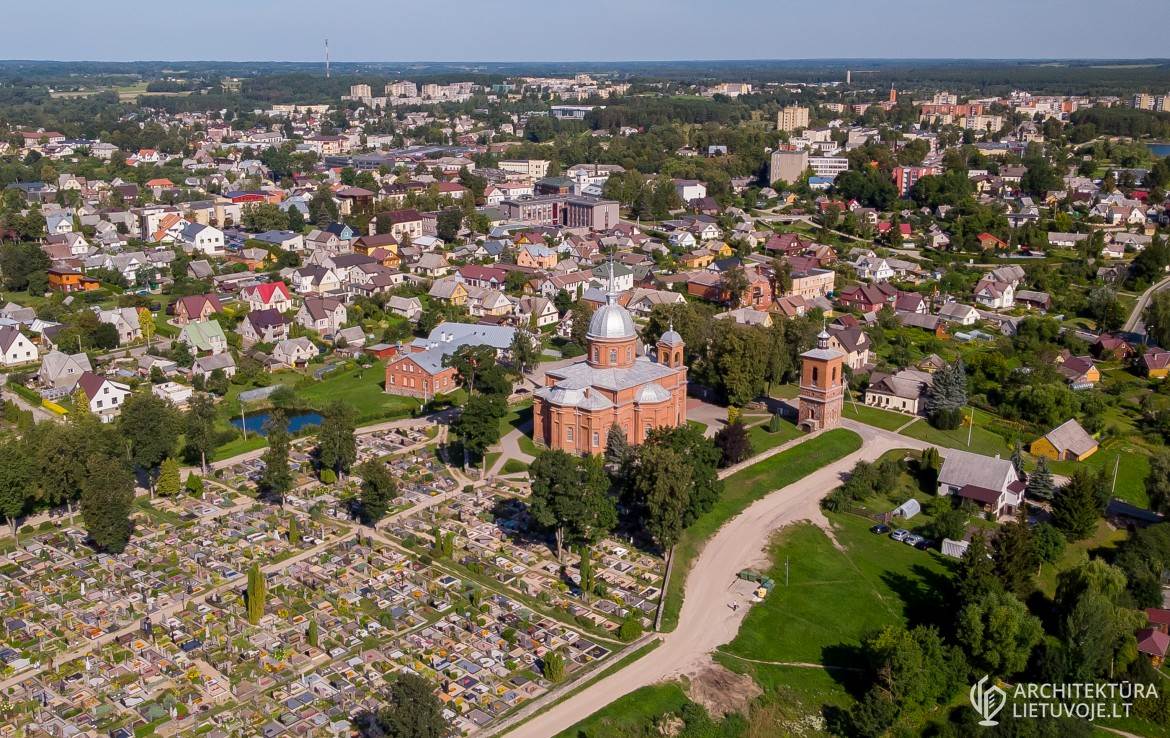 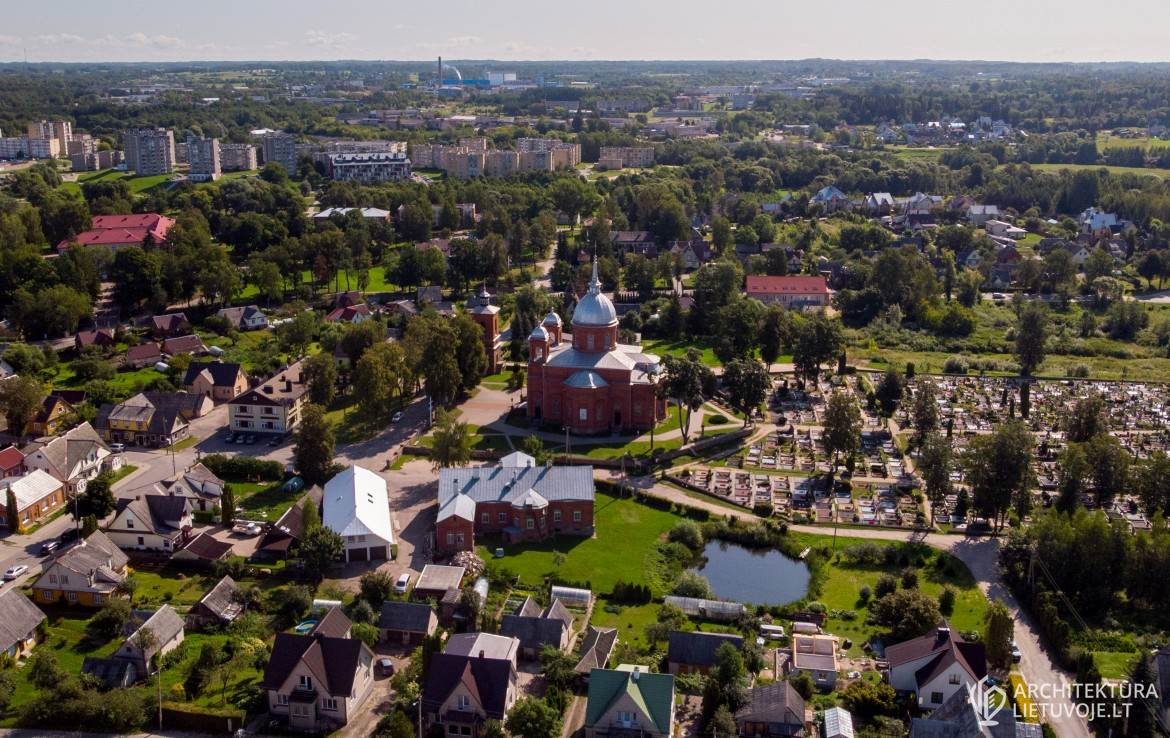 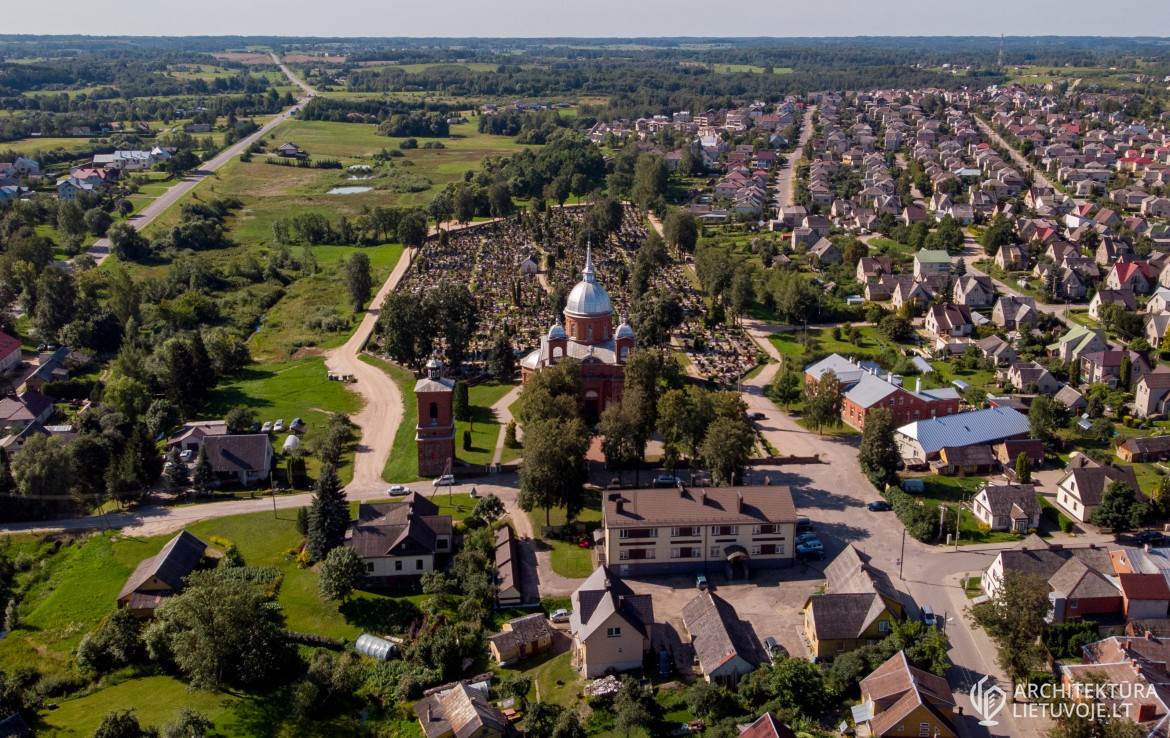 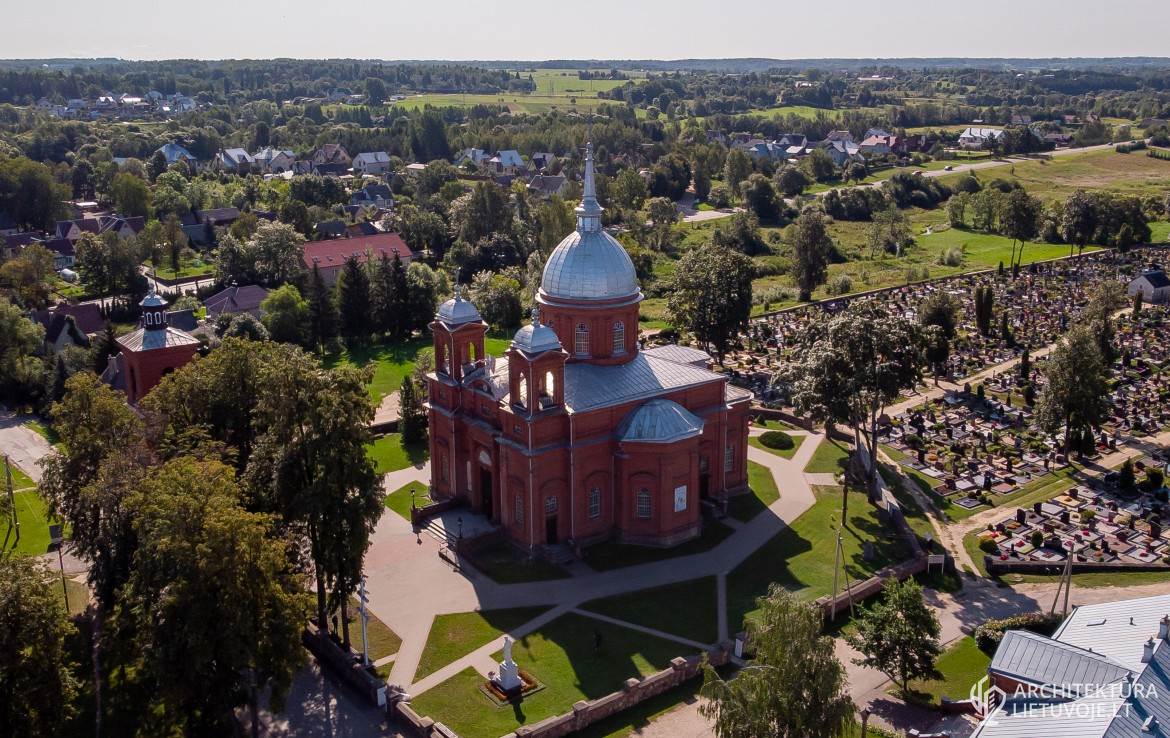 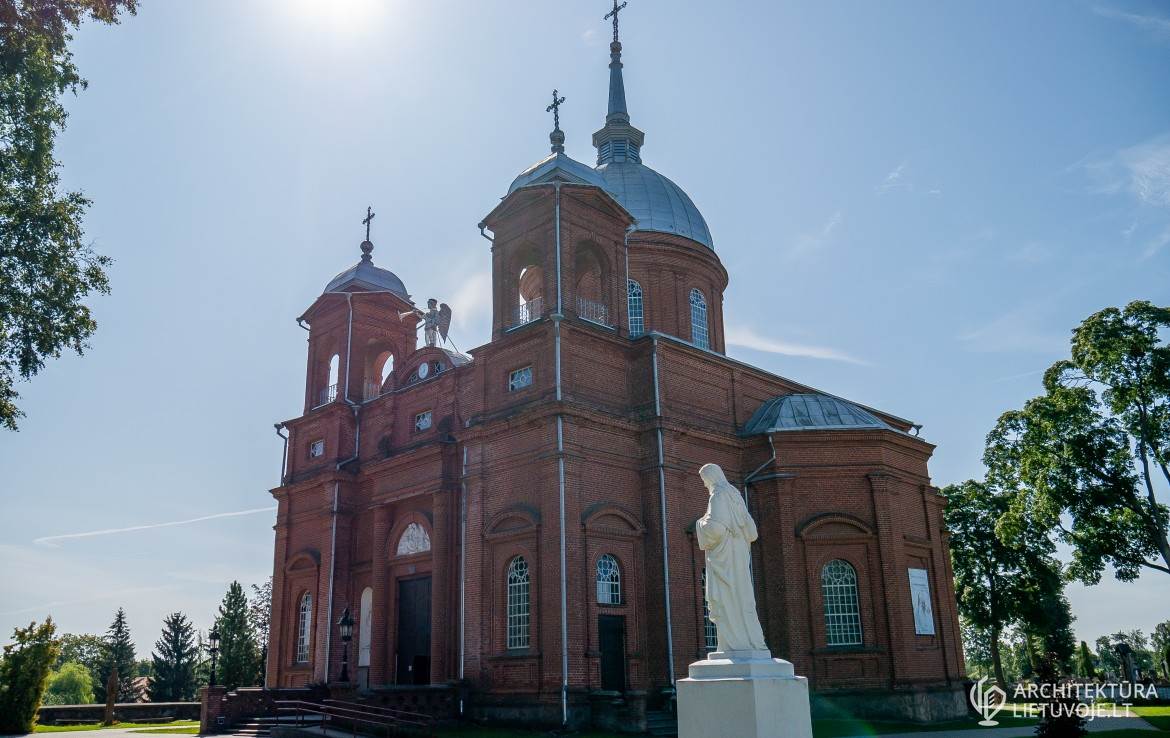 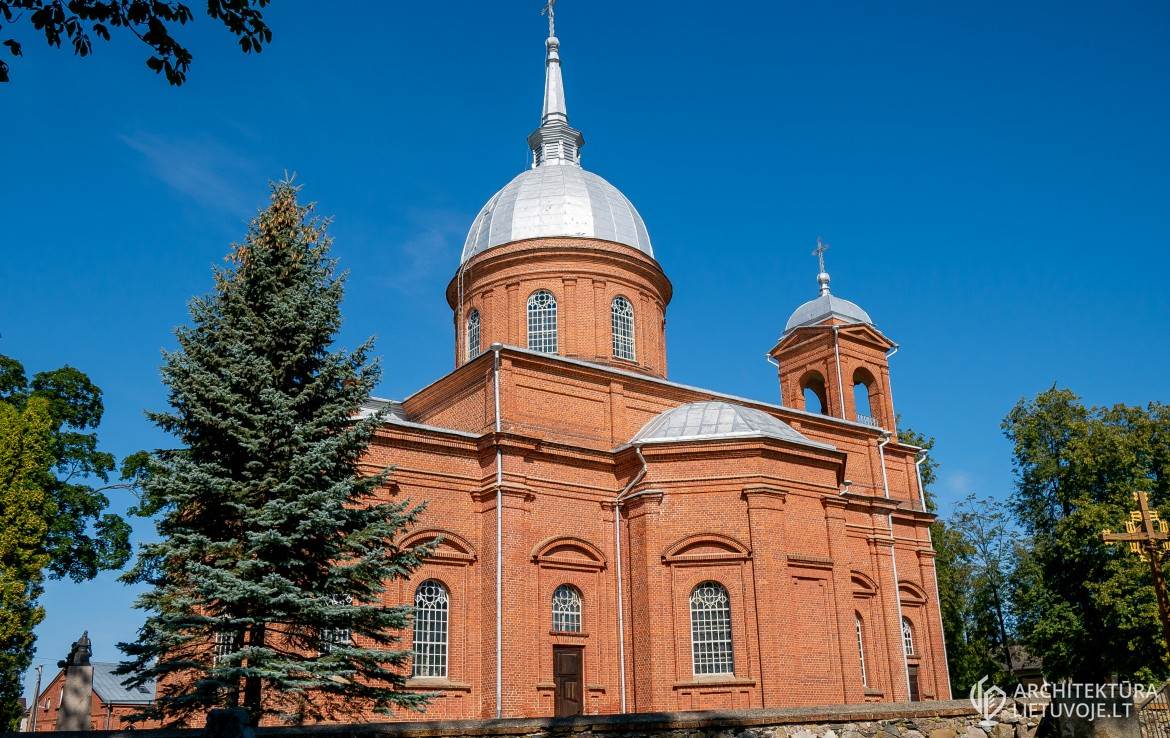 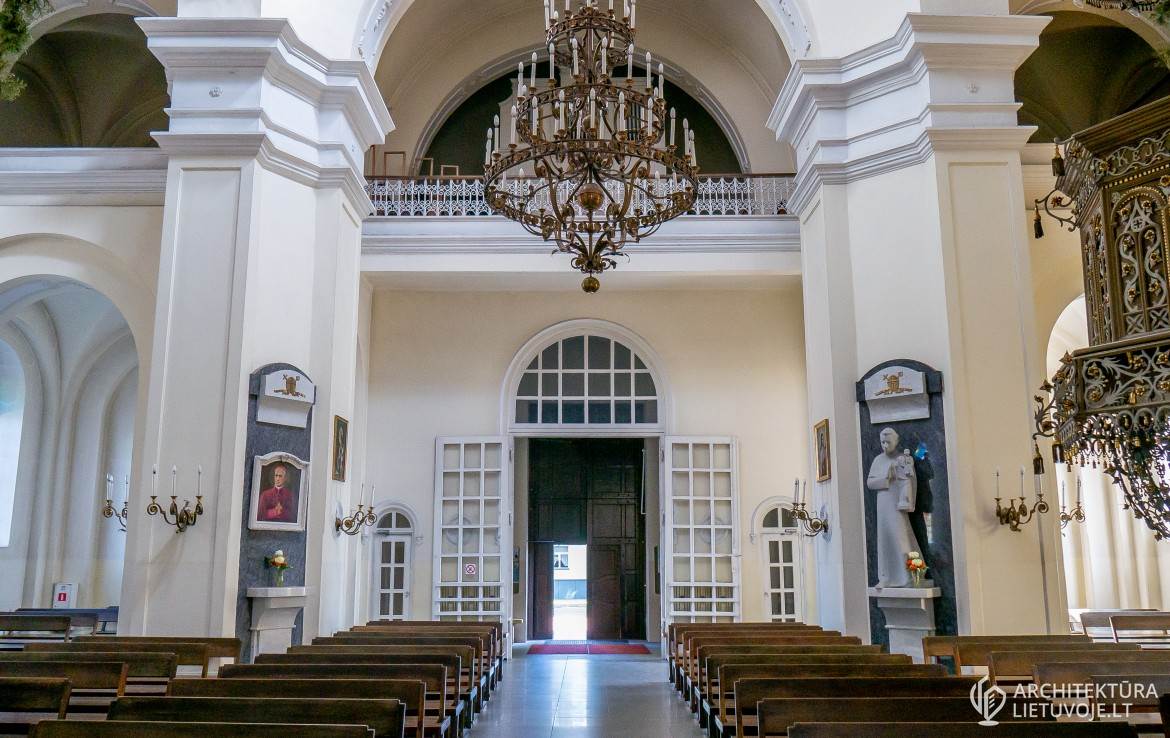 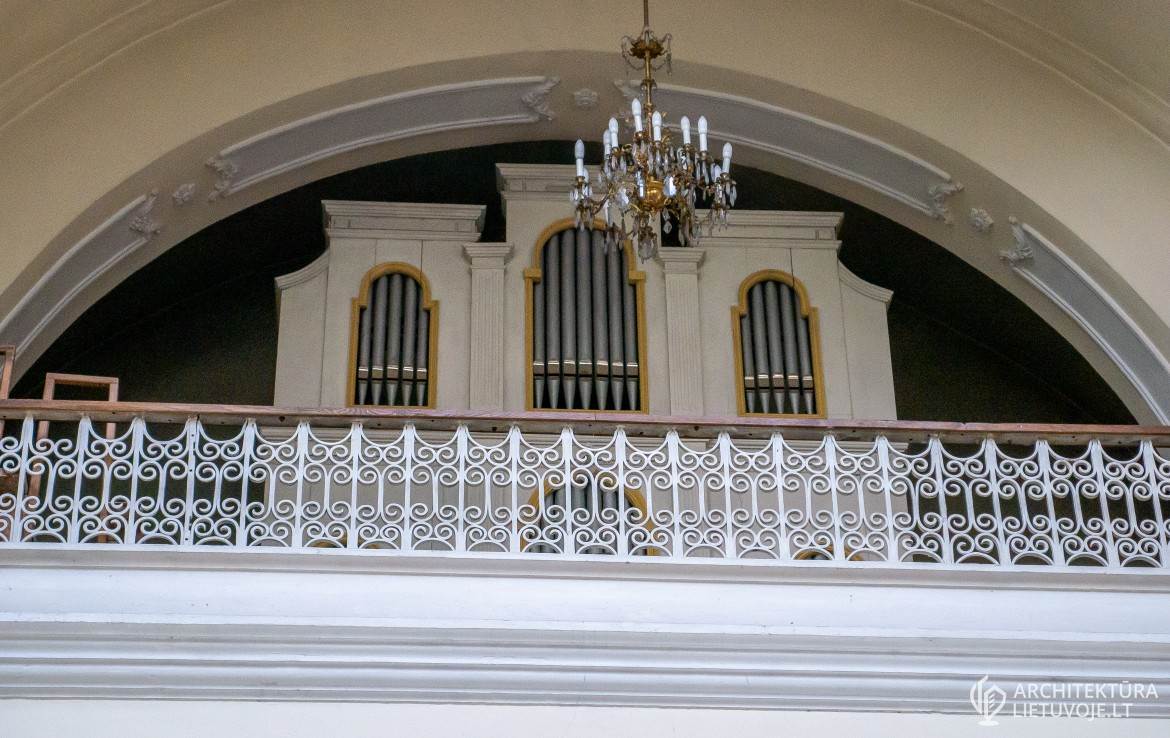 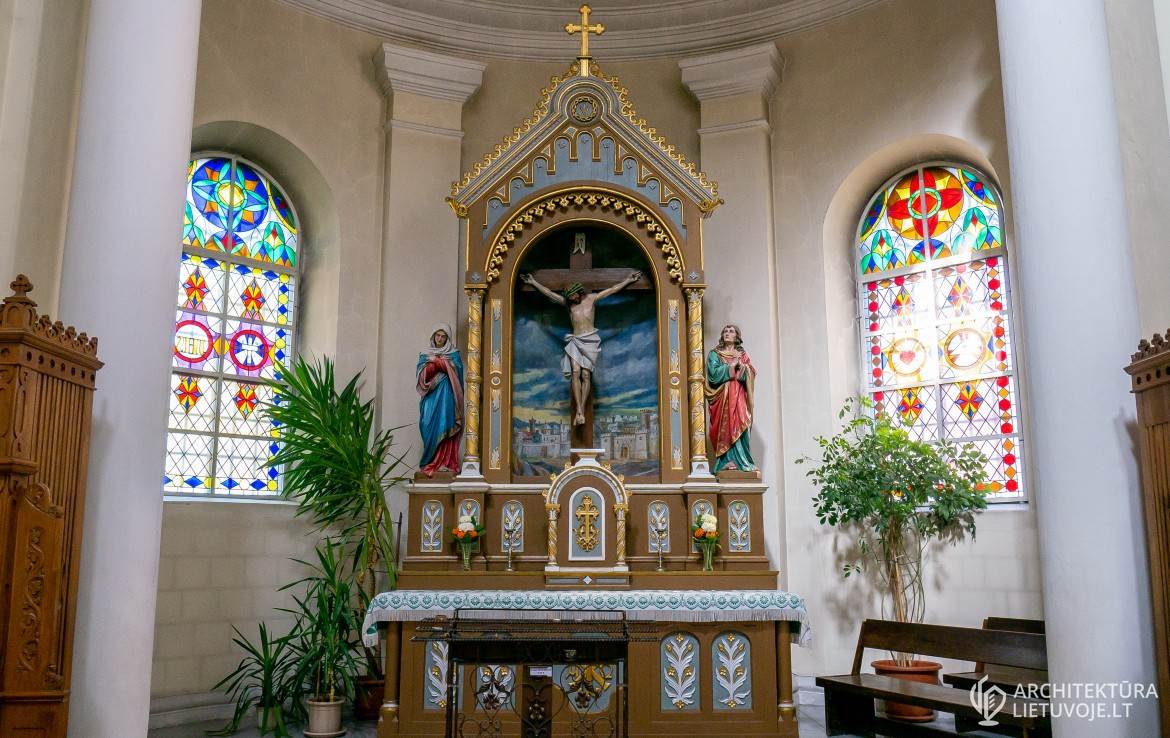 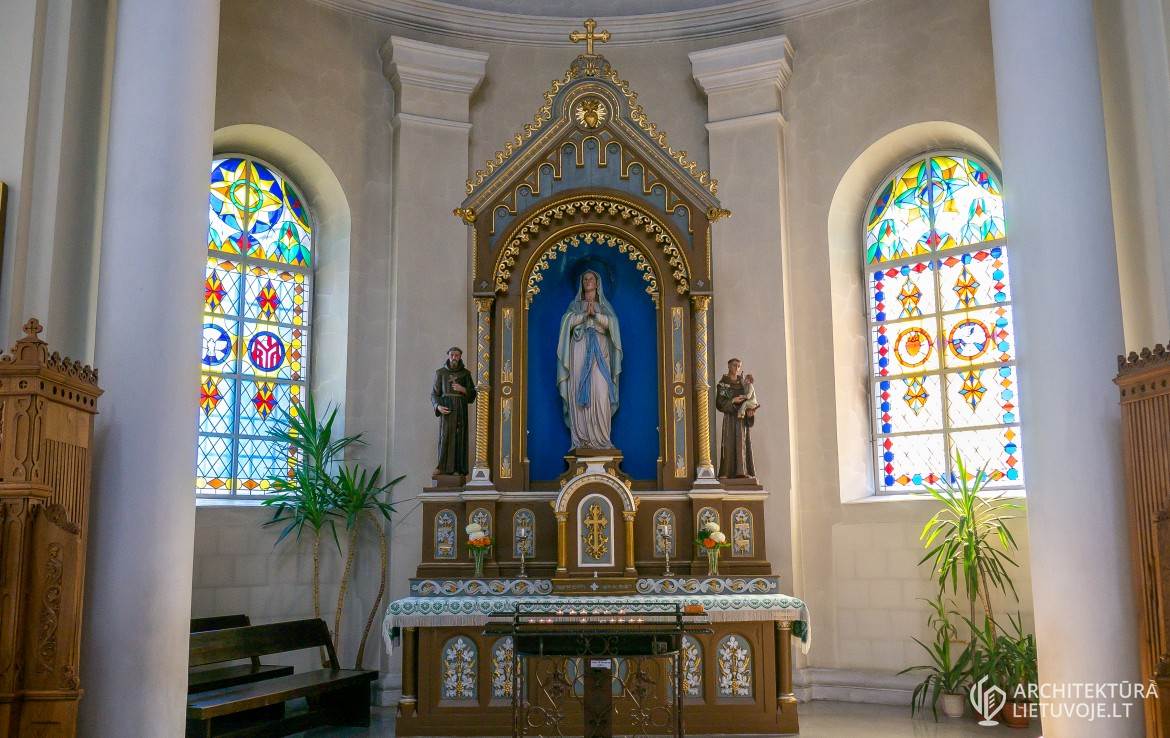 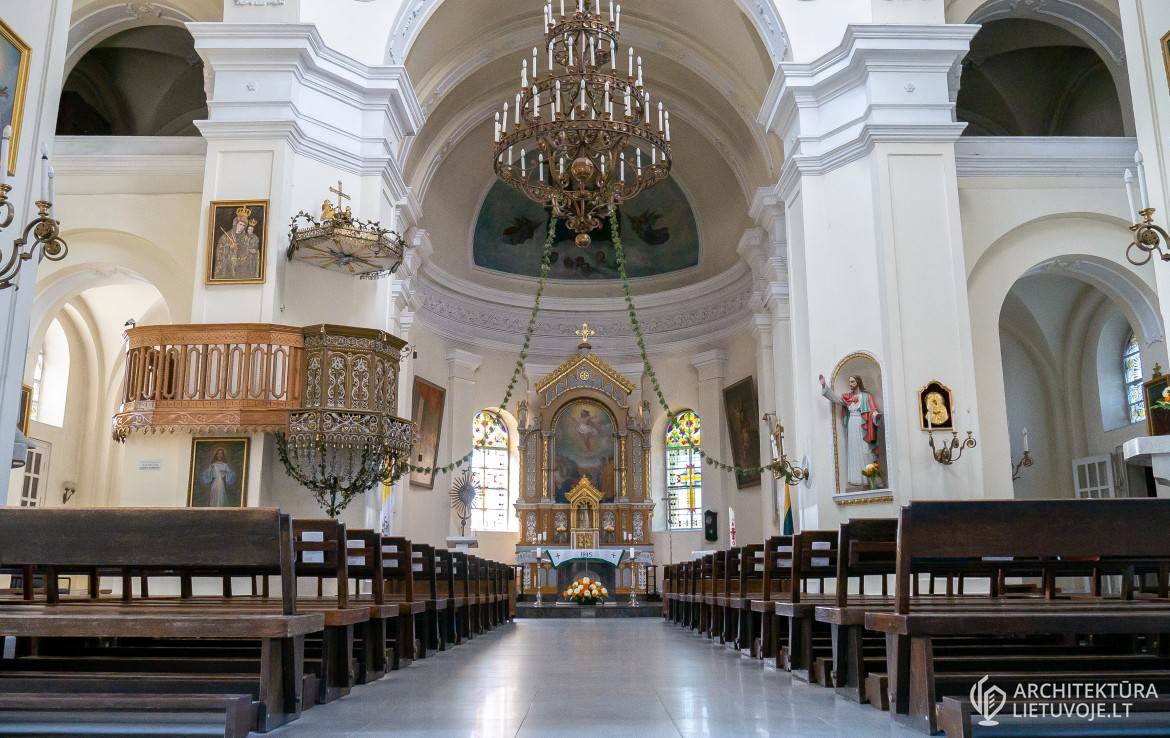 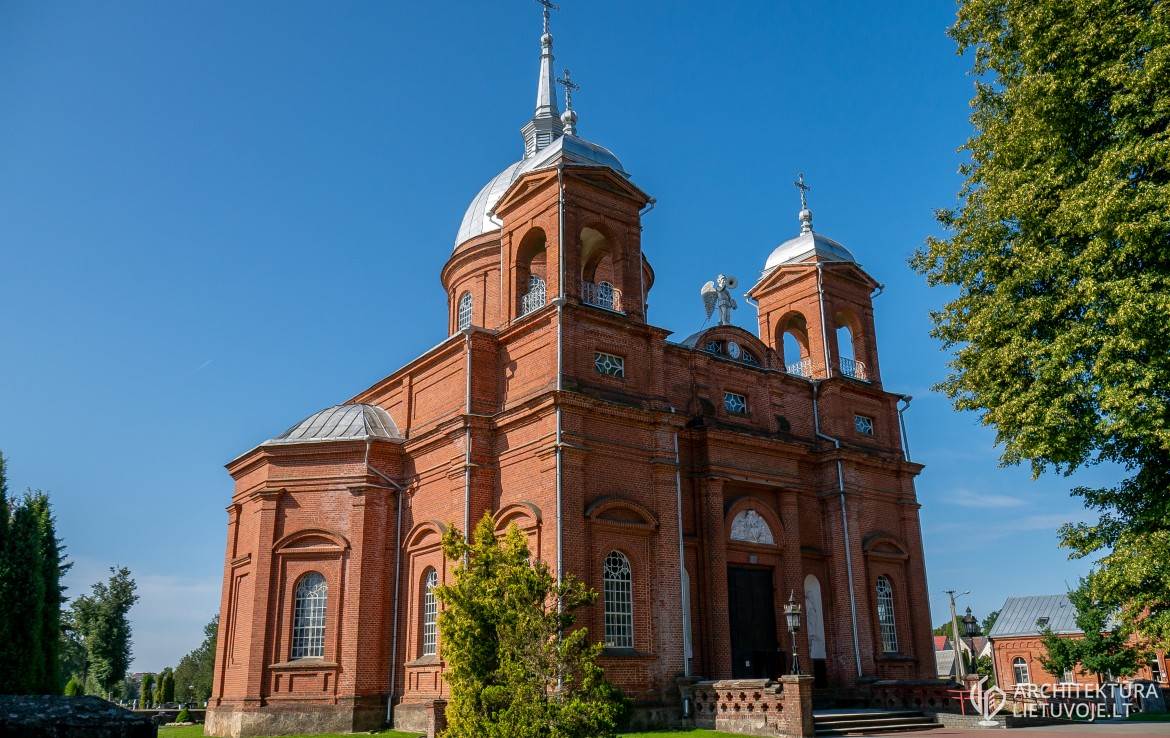