Juozapas Tiškevičius acquired the Lentvaris manor in the middle of the 19th century, starting its most impressive stage of development. Not even a decade has passed when the manor estate typical of the neo-Gothic of the Romanticism era was built, surrounded by a park designed by Édouard André, and the economic potential was supplemented by the newly built wire and nail factory. Vladislovas Tiškevičius, having inherited the manor, decided to reconstruct the main building of the manor – a Belgian architect de Waegh was invited for this purpose in 1899, and turned the former two-storey palace, of asymmetrical design and complex volume, typical of Romanticism, into the two-three-storey building with symmetrical composition closer to the historicism era, where the neo-Gothic architecture form, more typical of the manors of the north-west Europe, would be emphasised. The main highlight of the palace – a five-storey tower – was turned into a graceful six-storey tower. Just like to the majority of manors, the sorrowful period for the Lentvaris ensemble came after the Soviet nationalisation – the integrity of the complex was destroyed, the palace itself was transferred for the needs of the kolhoz, and since 1957 – transferred to the administration of a carpet factory. By adding a third storey, the original silhouette of the palace was disfigured and the roof lucarnes were destroyed. The inside of the palace was severely affected, the expressive first floor of the palace has also went through many changes. Currently the building is abandoned.

The palace consists of a rectangular volume with a high roof with attached volumes facing sideways, forming avant-corps in both wide façades, which are greater by the number of floors, but having lower roofs; at the junction of the south-west volumes, a tower is rising. The historical trends, of the second half of the 19th century, used in the Benelux and Great Britain, are clearly reflected in the architecture of the palace. The distinguished light-coloured angular rustics, window architraves, cornices and some other elements are not typical in the non-plastered palace façade in the Lithuanian architecture. Though neo-Gothic forms are used throughout the building, which may be observed at the central avant-corps of the front façade and in the decorative elements used in it, however some of them are interpreted quite freely and are rather more typical of the phenomena of the Romanticism era. The expressed spire of the tower, the impression of vigour of which is enhanced by the surrounding bay window helmets and the compositions of arcatures and pointed arch niches located in top section of the tower. Bas-reliefs depicting the coat of arms of Tiškevičiai and Lubomirski families are still hanging above the central entrance, and the moulding ornamentation of the architraves still remains in the niche of the pointed arch portal. At the back façade, the central avant-corps acquires a five side form, and the two smaller three side and square design avant-corps attached to the sides of the façades of the palace, adding variety to the configuration of the volume of the palace. Other buildings from the Historicism era remained in the palace’s ensemble, such as the later built “Riviera” café, where the impact of the brick style can already be felt. One of the most interesting buildings is the water tower of a bulky form, the construction date of which is unknown, but it is believed that it appeared in the middle of the 19th century. The building is of utilitarian architecture, divided into three sections by cornices. Deep semi-circular arches, where the window and doors niches are incorporated, continue through the two lower segments. Yet, the top section, decorated with arcature of Gothic forms and pinnacles combines with the old and the post-reconstruction architectural elements of the palace. From one side, the rounded extension of the stairway of almost the same height leans on the building. The tower building is interesting not only in its architectural configuration, but also as the part of the history of the engineering heritage. 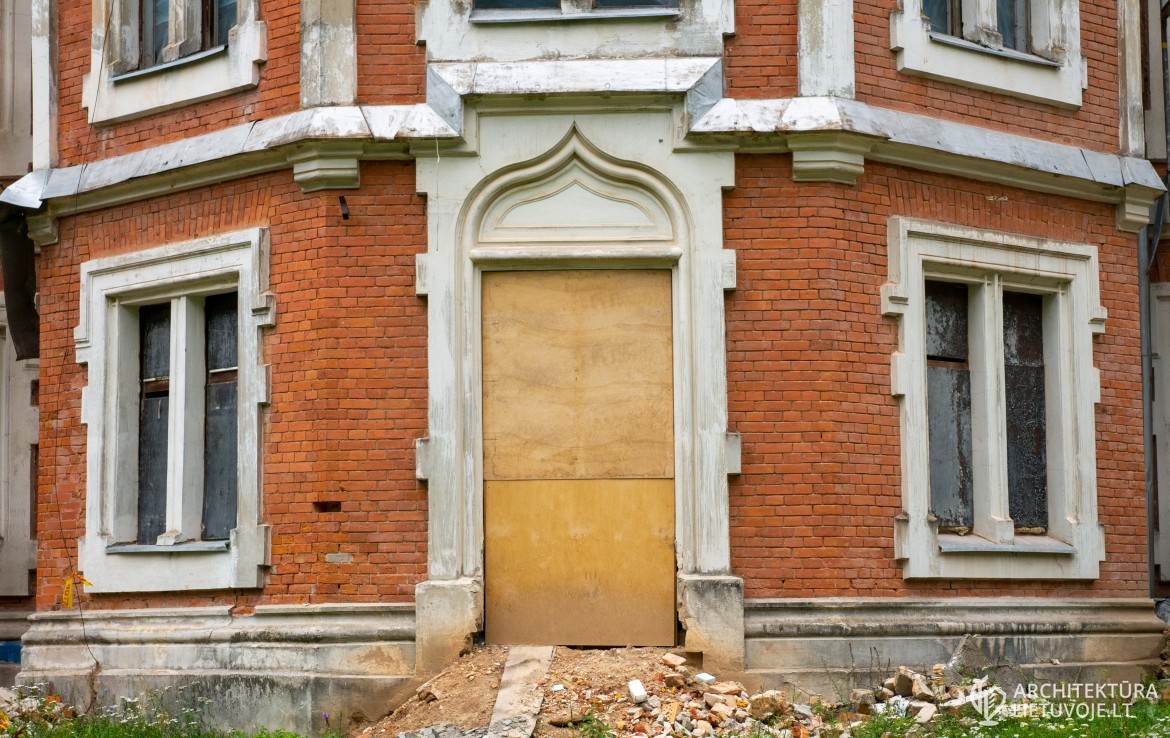 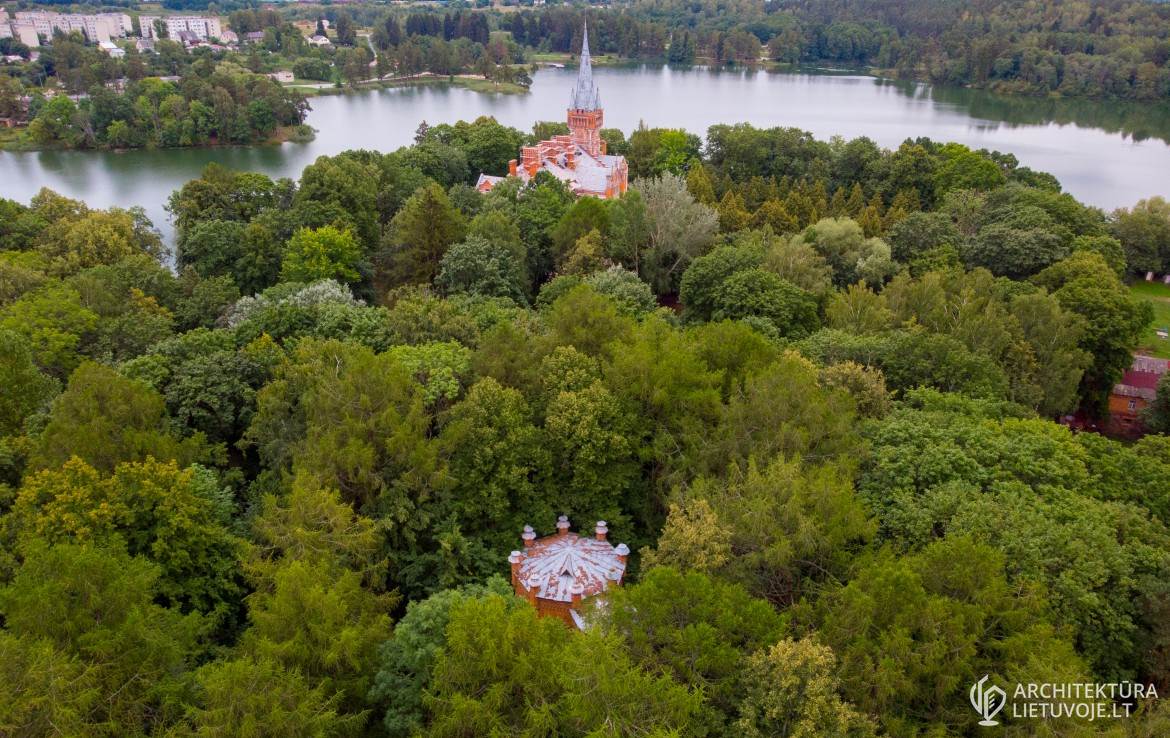 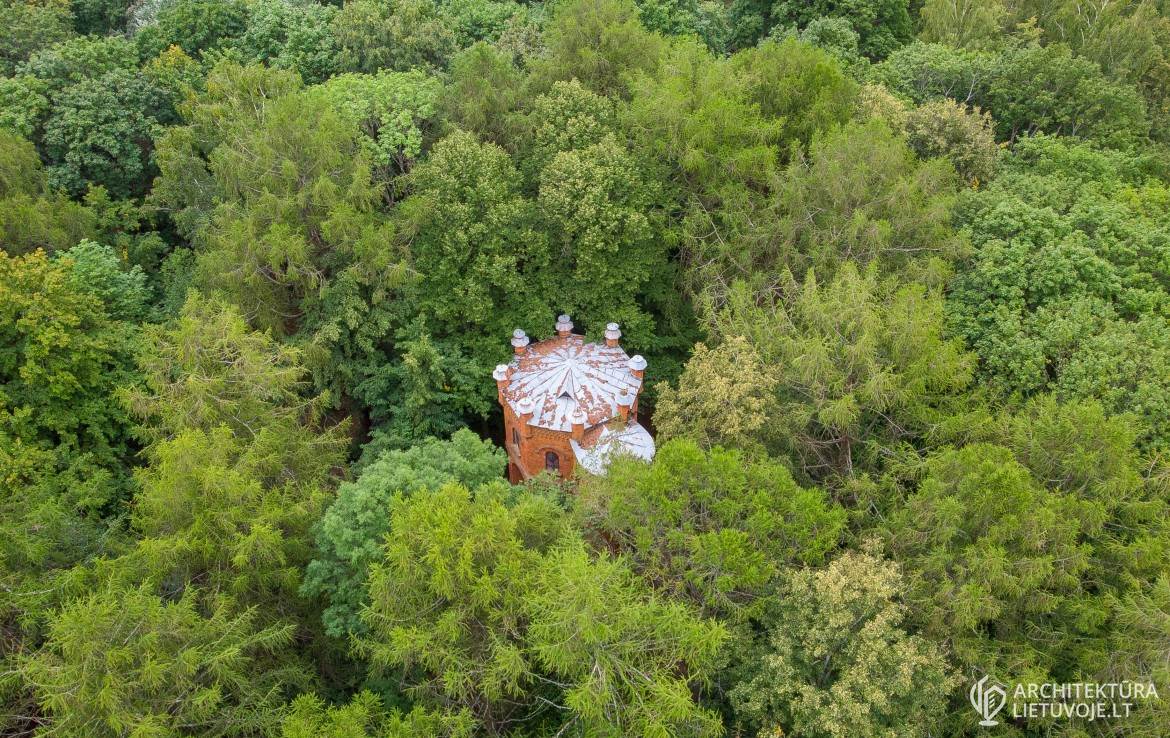 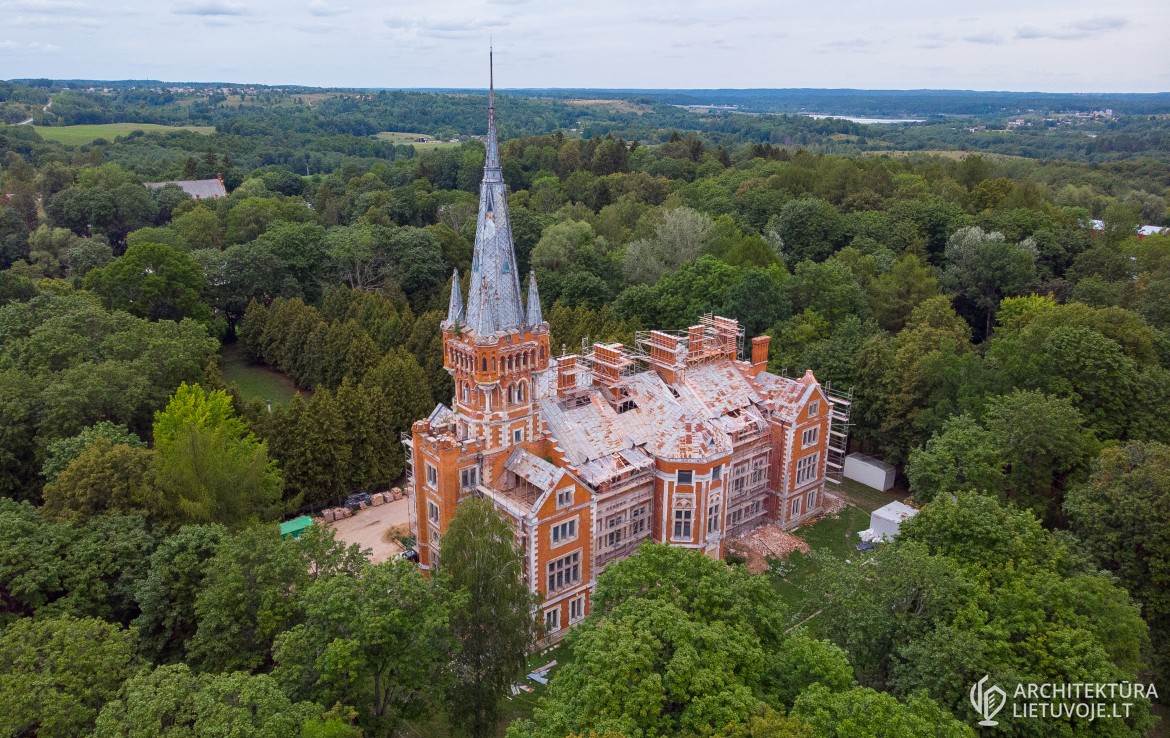 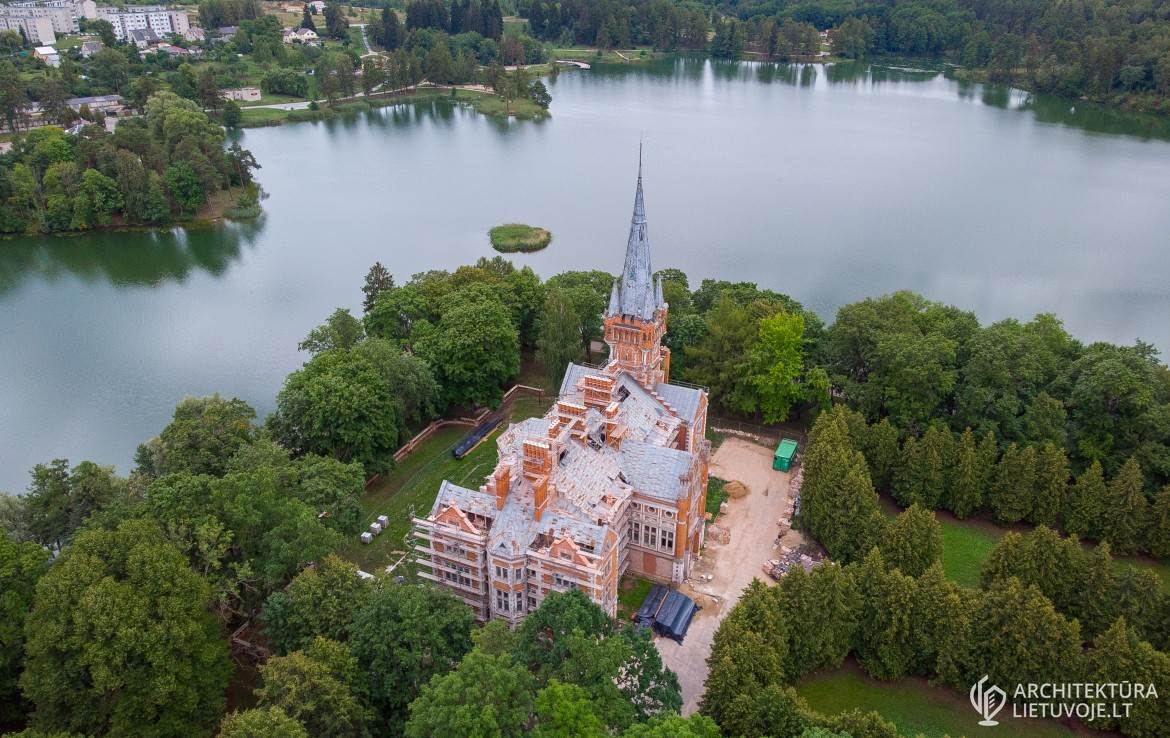 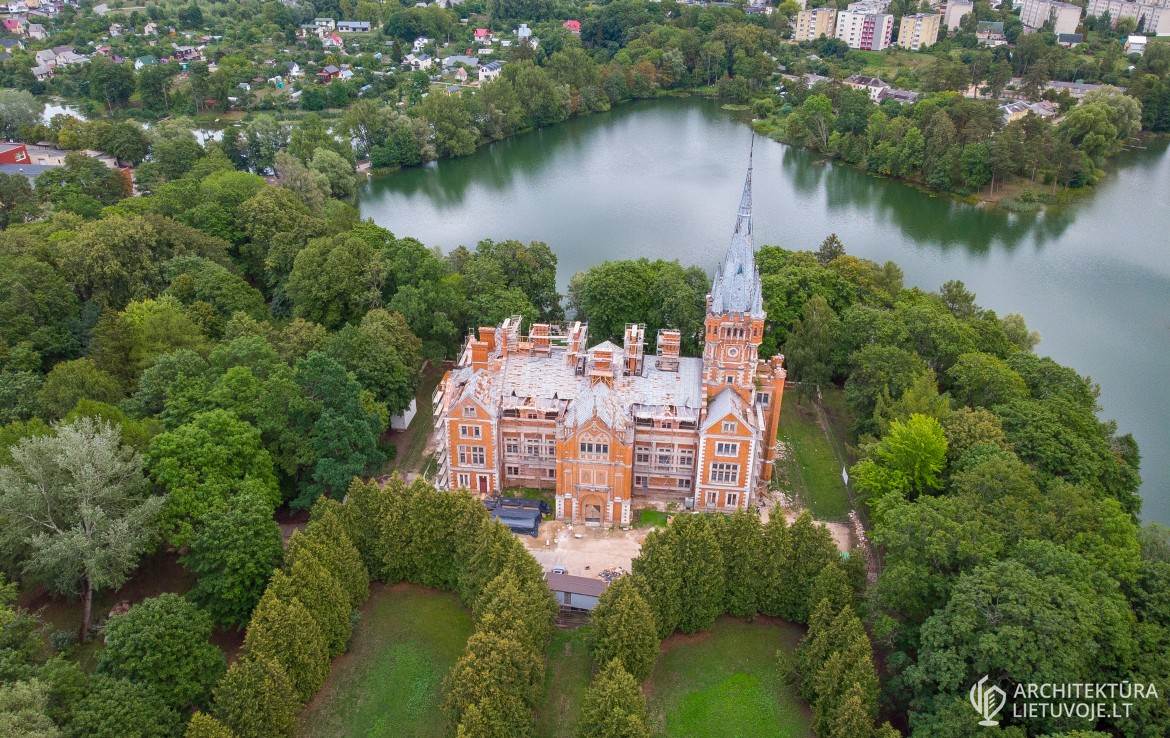 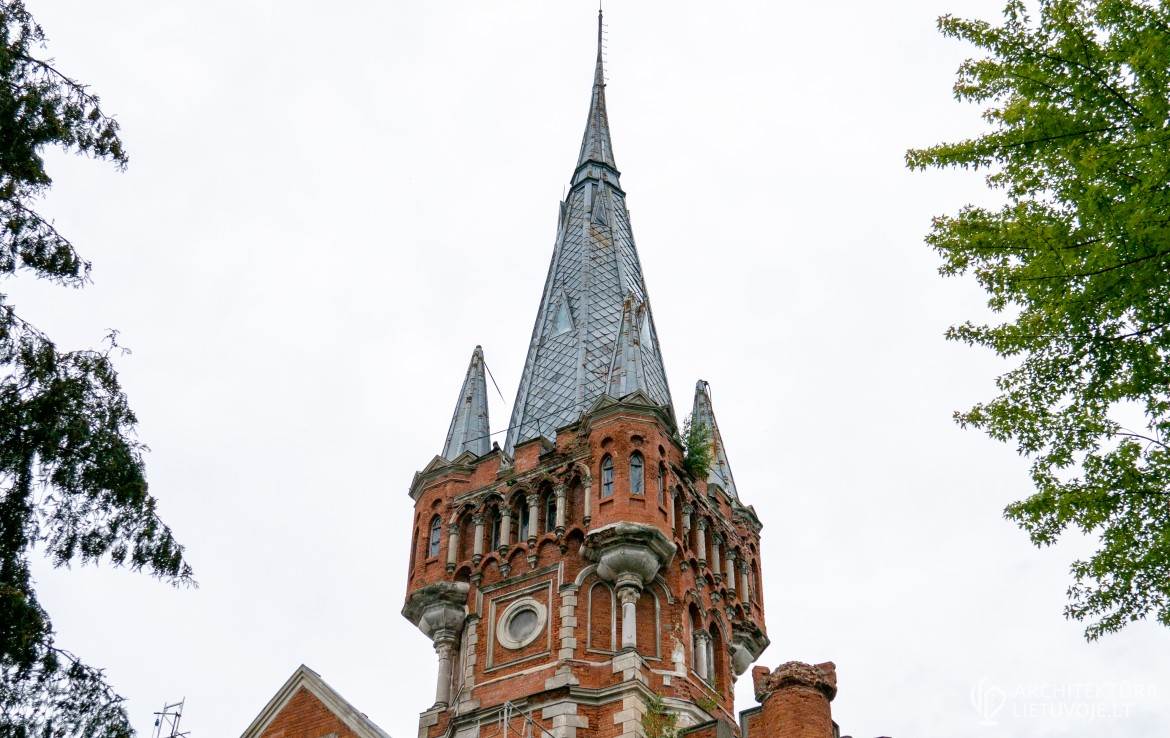 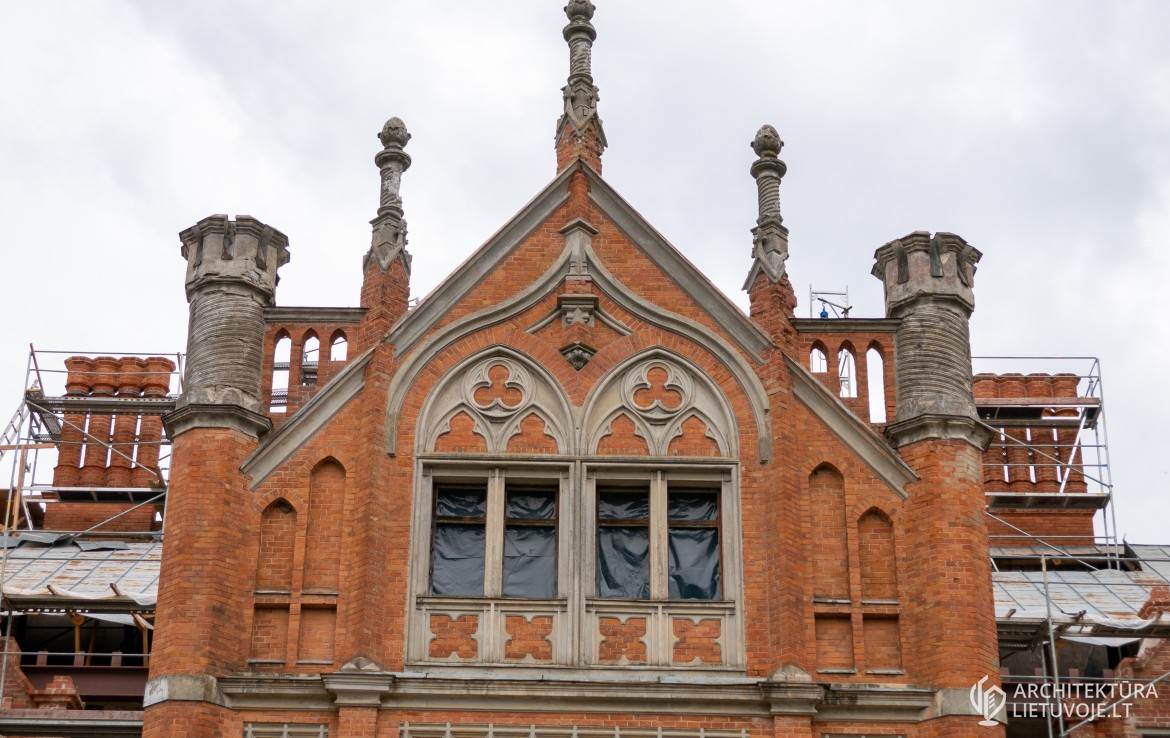 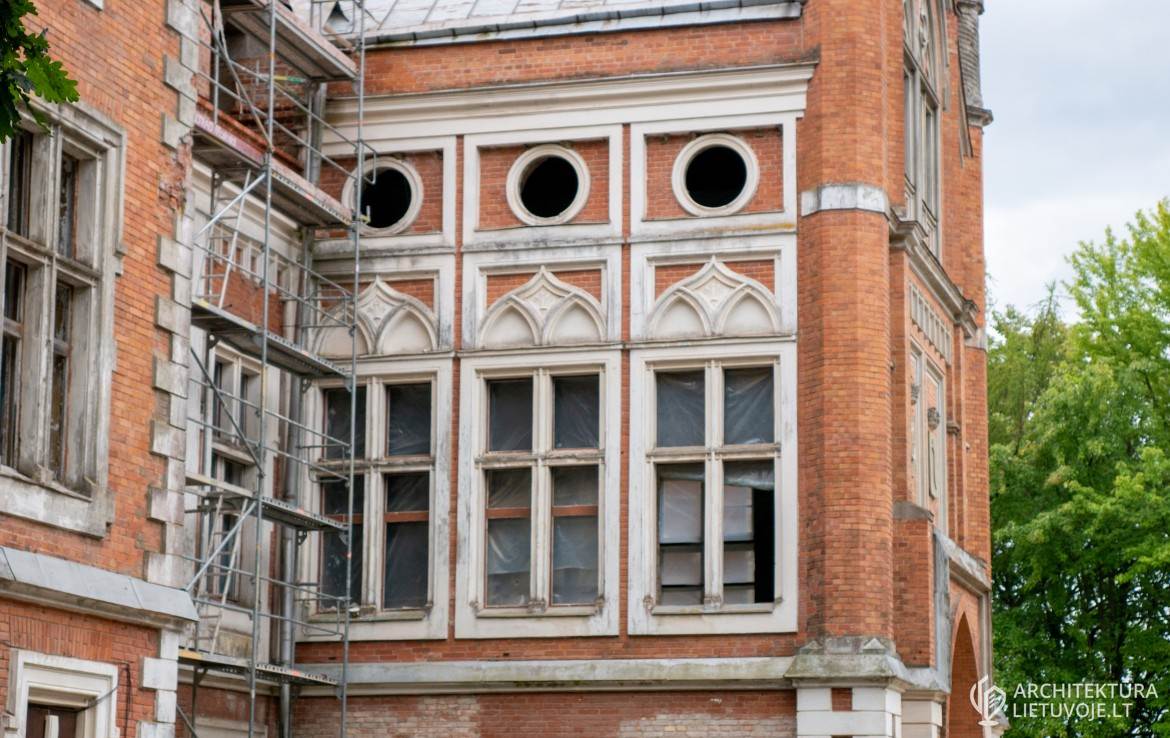 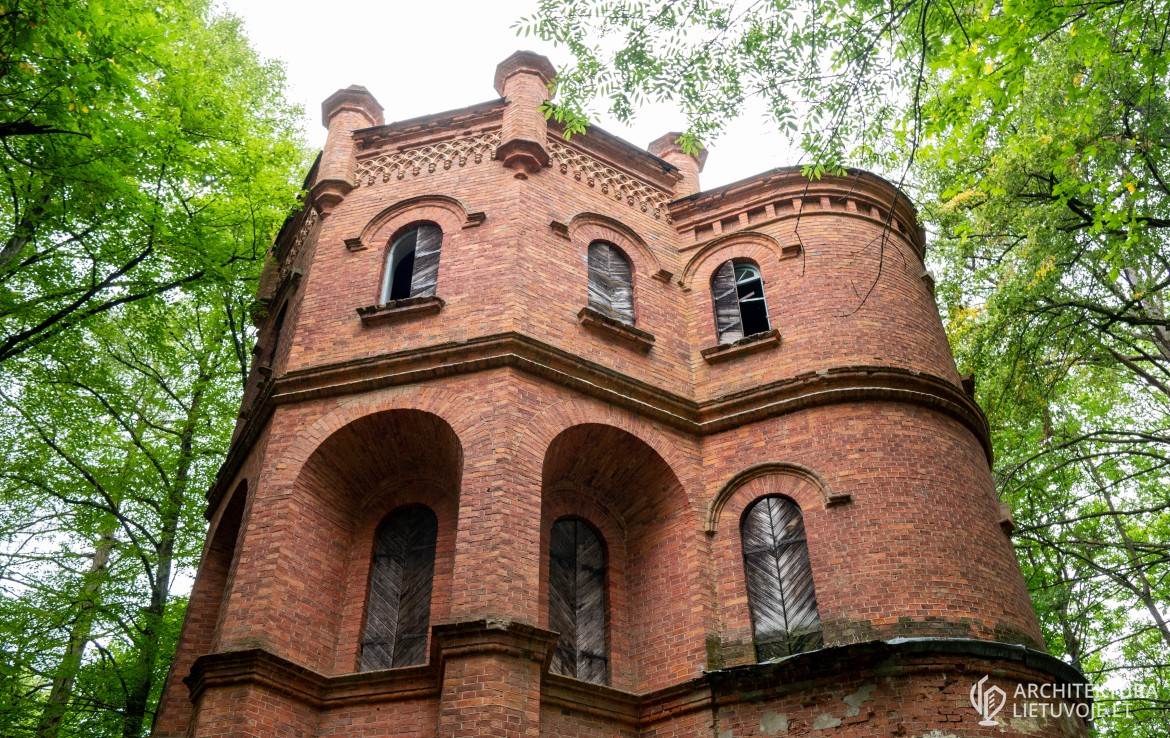 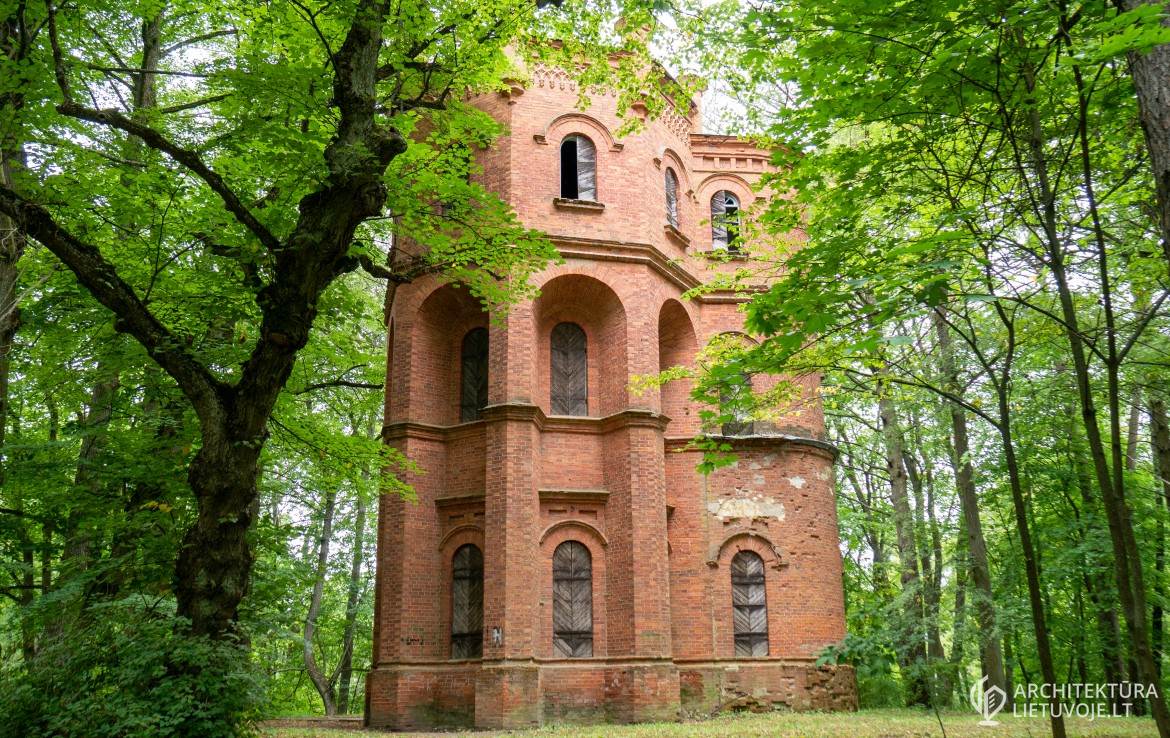 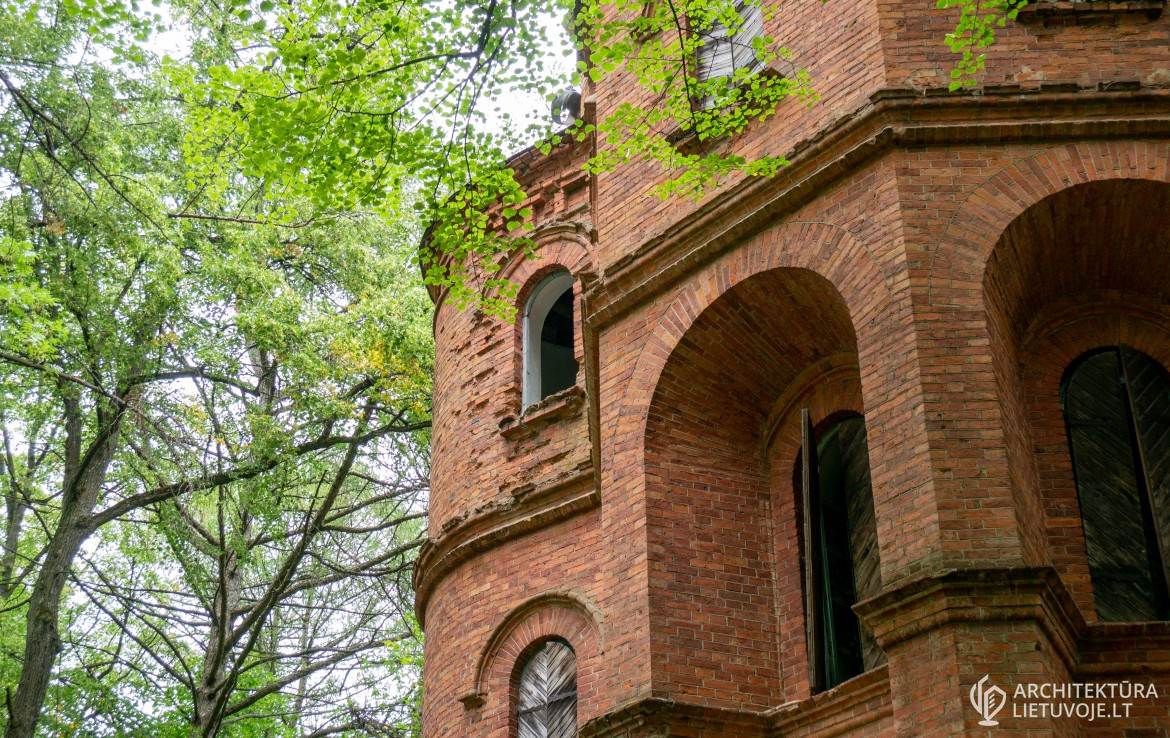