Troškūnai Church of the Holy Trinity was designed by one of the most prominent architects of Lithuania in 18th-19th cent. junction, Martin Knackfuss. The building, built between 1774 and 1788, combining architectural features of late Baroque and Classicism had been under the process of equipping for a long time – consecration took place in 1803. Although the appearance of the building slightly changed due to further reconstructions, still its exterior continues to show the M. Knakfuss’s idea. In the tall one-tier facade, a Colossal Order portico dominates, the base of which consists of Colossal Order columns grouped in twos, holding the entablature broken in the centre and a segmental pediment; the portal is replaced in the centre by a large fascia, consisting of several parts, as well as a large arch type trimming, covering the window set up above the entrance and framing the surrounding plane. Side parts of the facade are modest, with niches and windows set up here in several rows, and brought out on the edges by pilasters; the attic existing on the entablature, on its sides is decorated with vases above the corner pilasters. The pediment consists of two parts: the bottom one is joined with the main part of the facade by side volutes, while on the sides is framed with two rows of Ionic pilasters, holding the segmental upper portion. In the centre of the pediment, in the interrupted place of the portico pediment, the opening of the door has a balcony and is decorated with cross motif trimming and covered with triangular fascia. The nave of the basilica is separated by massive pillars with doubled pilasters. Interestingly, the latter on the central side of the nave is of modified Ionic type, while on the side of lateral naves and in the walls of it – of Doric Order; the entablature, girding the central nave ends with cornice with dentils. The church contains seven altars, the High Altar of which, taking up the entire rear part of the presbytery, in 1798 was created by Karolis Jelskis, who was previously responsible for the part of survived decor of the church.

The Bernardine Monastery House appeared almost at the same time as the church did – in 1770-1778. The monks used to live here until the time of monastery closing down in the mid-19th century by the tsarist authorities. Previously, the building of four blocks formed a typical closed yard, still one block was demolished after the fire ravaging the Monastery in the late 19th century. The building reflects quite modest architecture of monasteries of that time – the corners are propped by ledges while the garret is separated by the profiled cornice; the most expressive accents here are namely functional, like the Baroque two-tier roof survived, part of building plan or vaults covering the inside spaces. One can see the two-tier roof on the school’s building of rectangular plan, which apparently was designed by M. Knackfuss as well, and the appearance of which is similarly modest, still the centre of the main facade is divided by four bossage-plated pilasters.  In 1803 the Ensemble was complemented with a three-tier belfry, having clear features of High Classicism, which had been designed by Pietro de Rossi. Its tiers, lowering upwards, are similar, still differ in subtle details – the first tier is emphasized by paired bossage-plated pilasters in the corners, while on the first floor bossage disappears, and on the third one, Doric Order is replaced by Ionic one; the size and form of tiers is different as well. On the top the tower ends with the entablature with the ribbon of small arcade and a three-part helmet of streamlined forms. 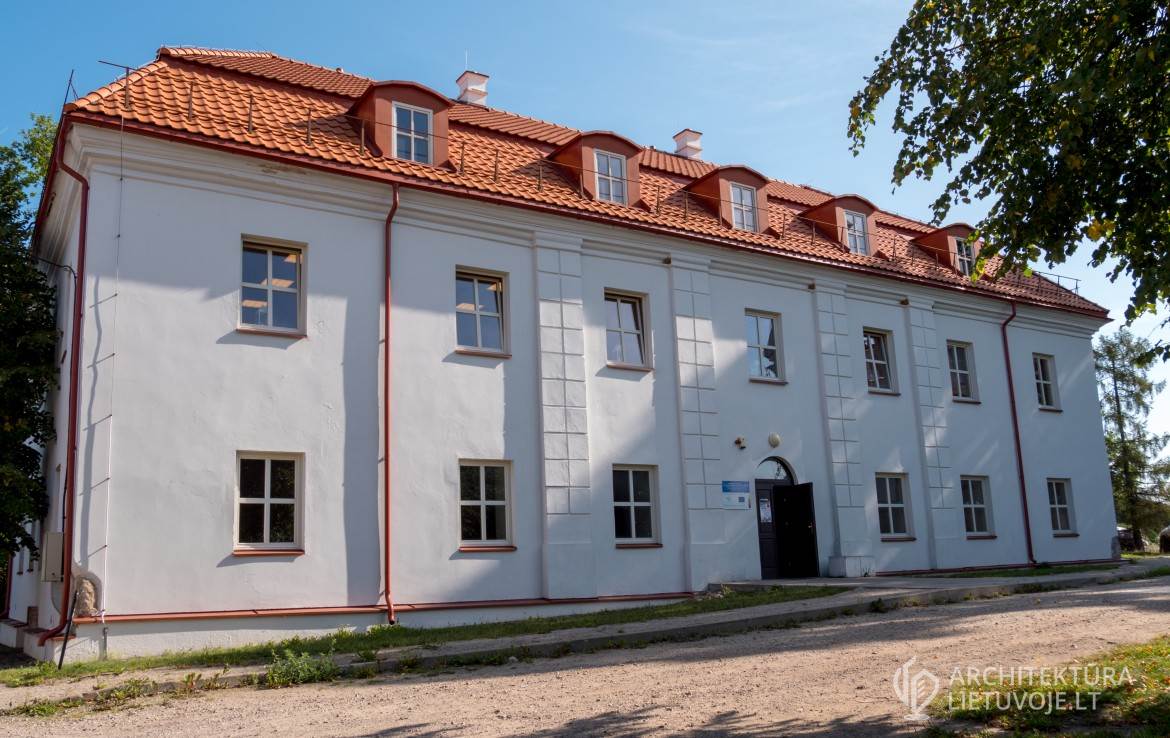 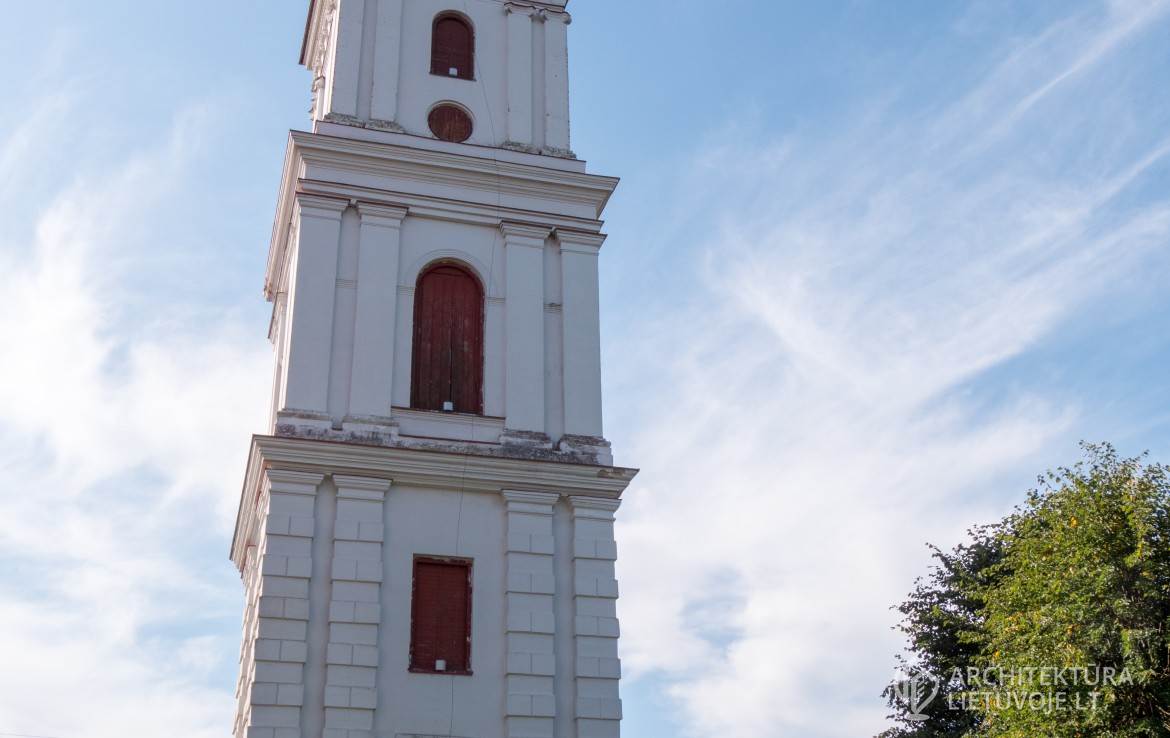 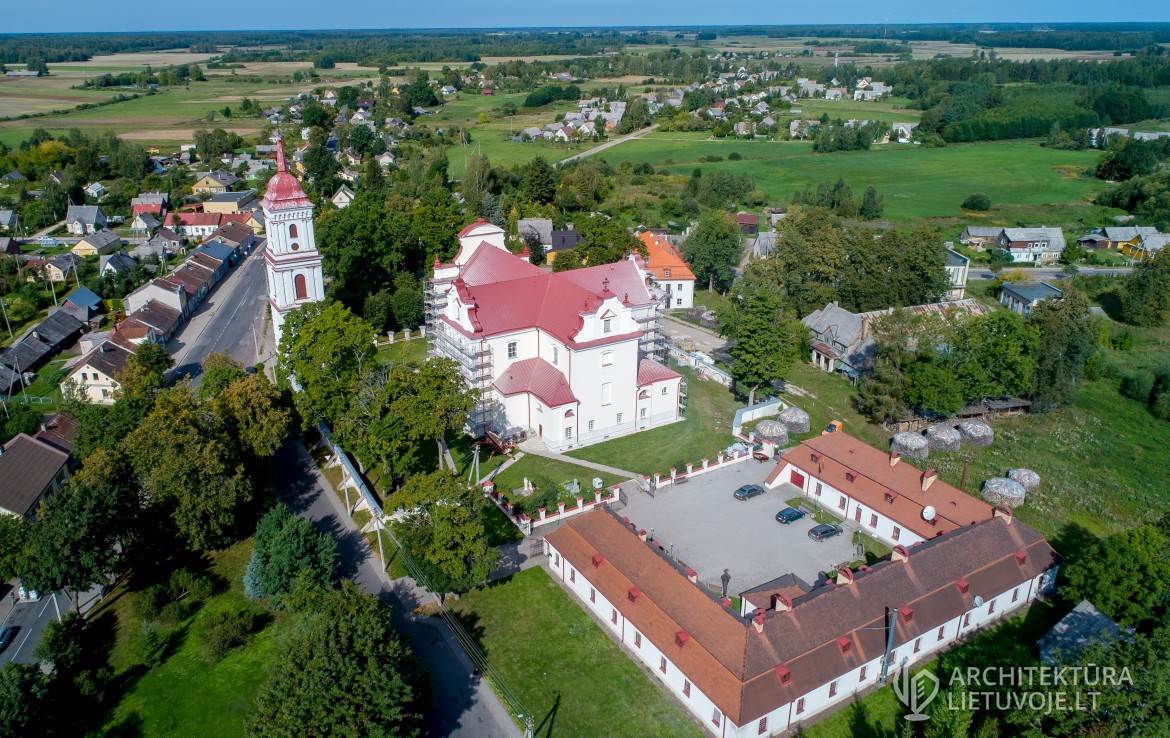 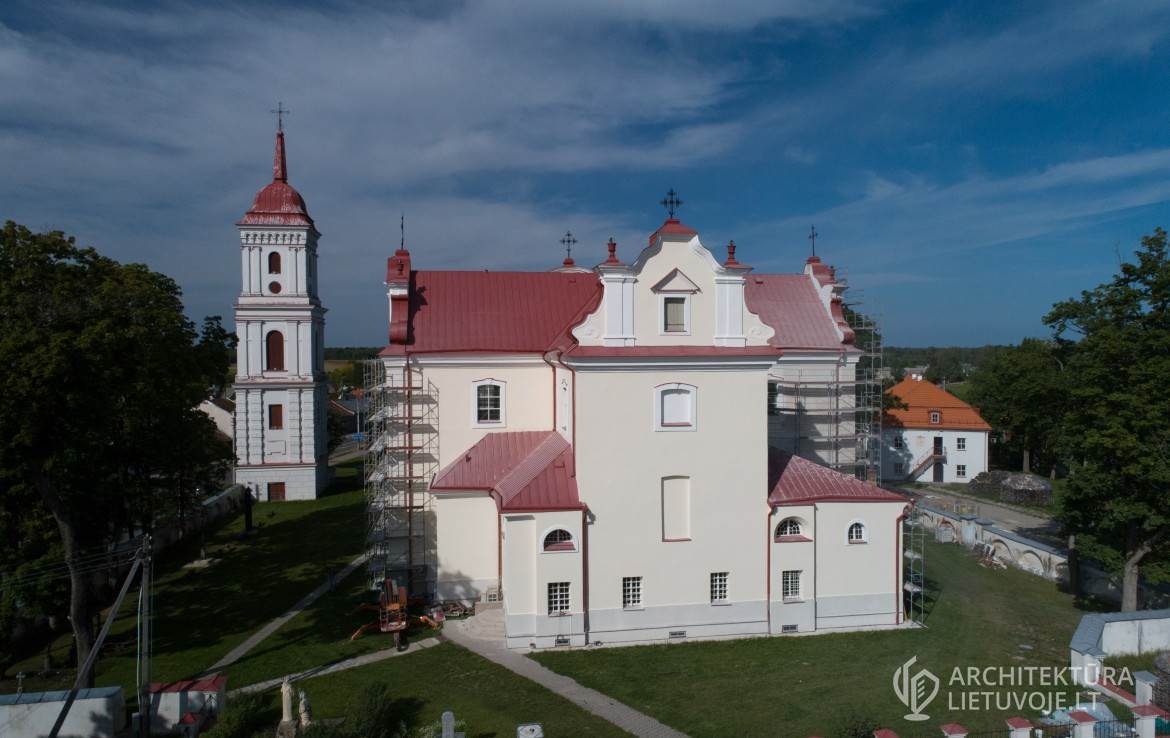 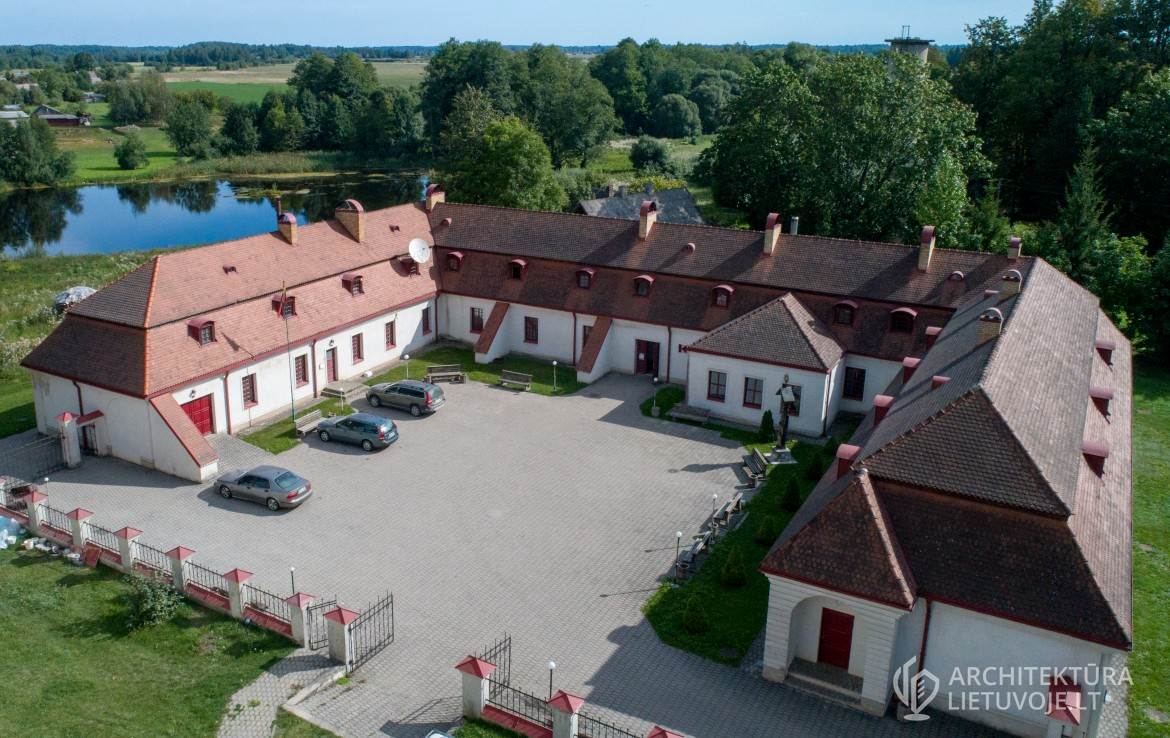 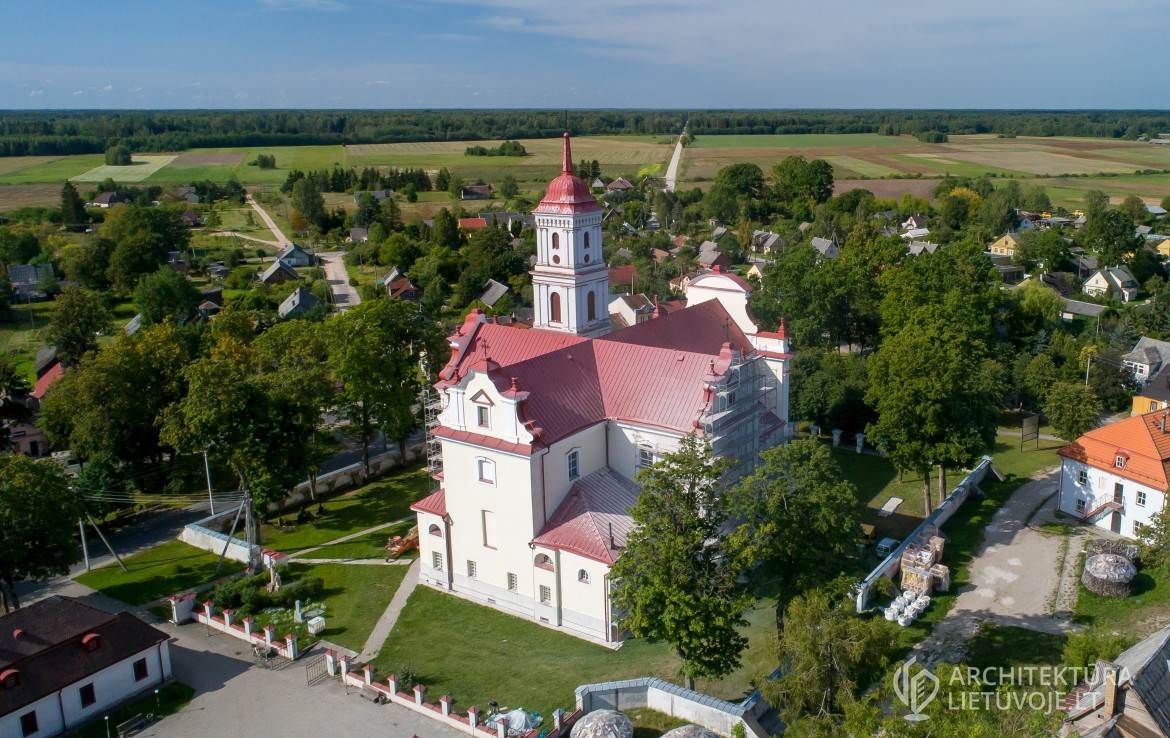 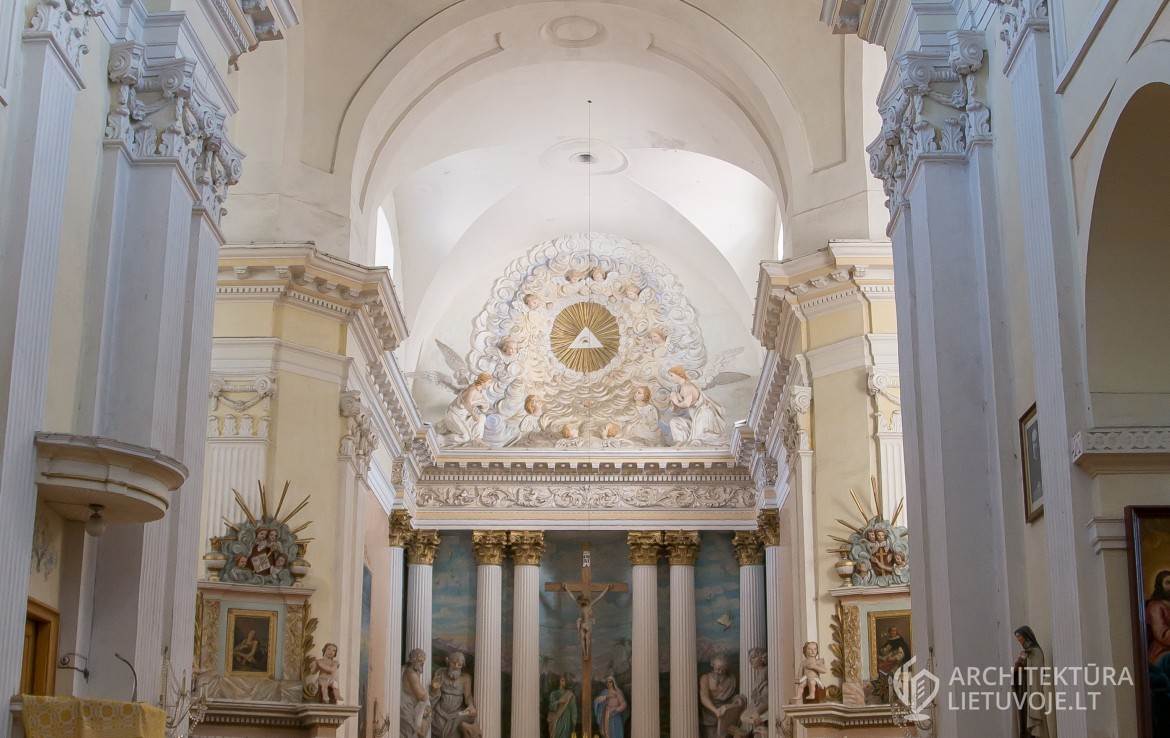 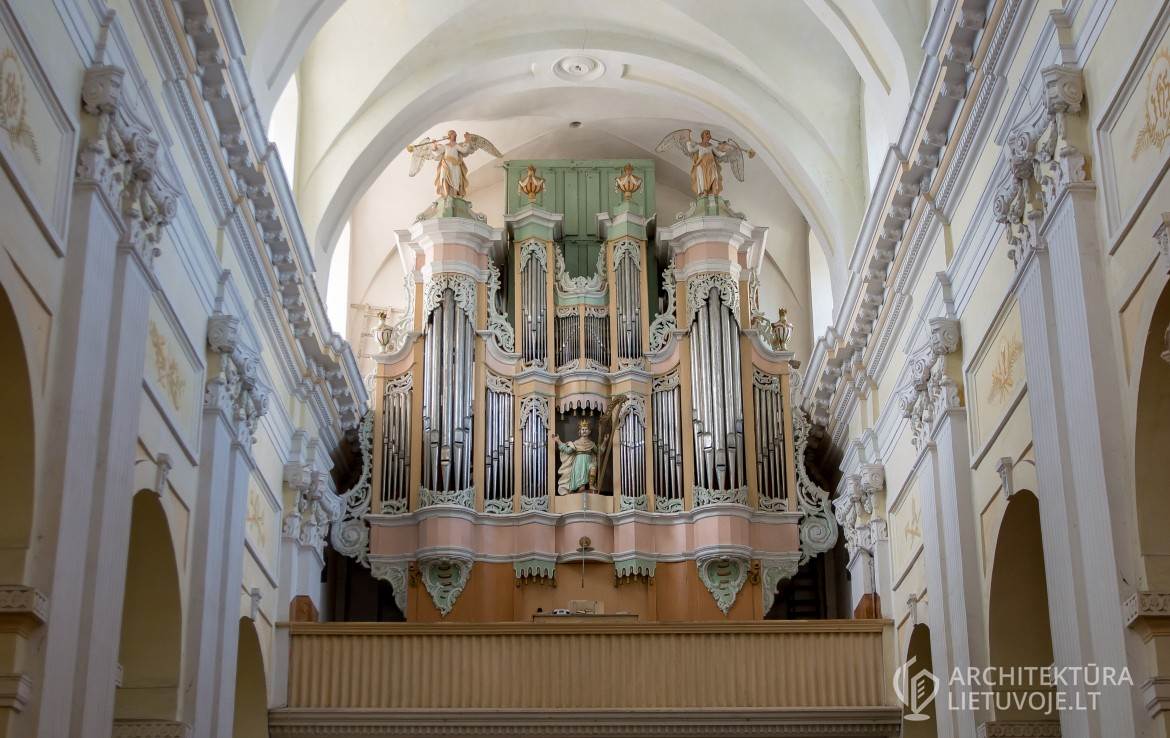 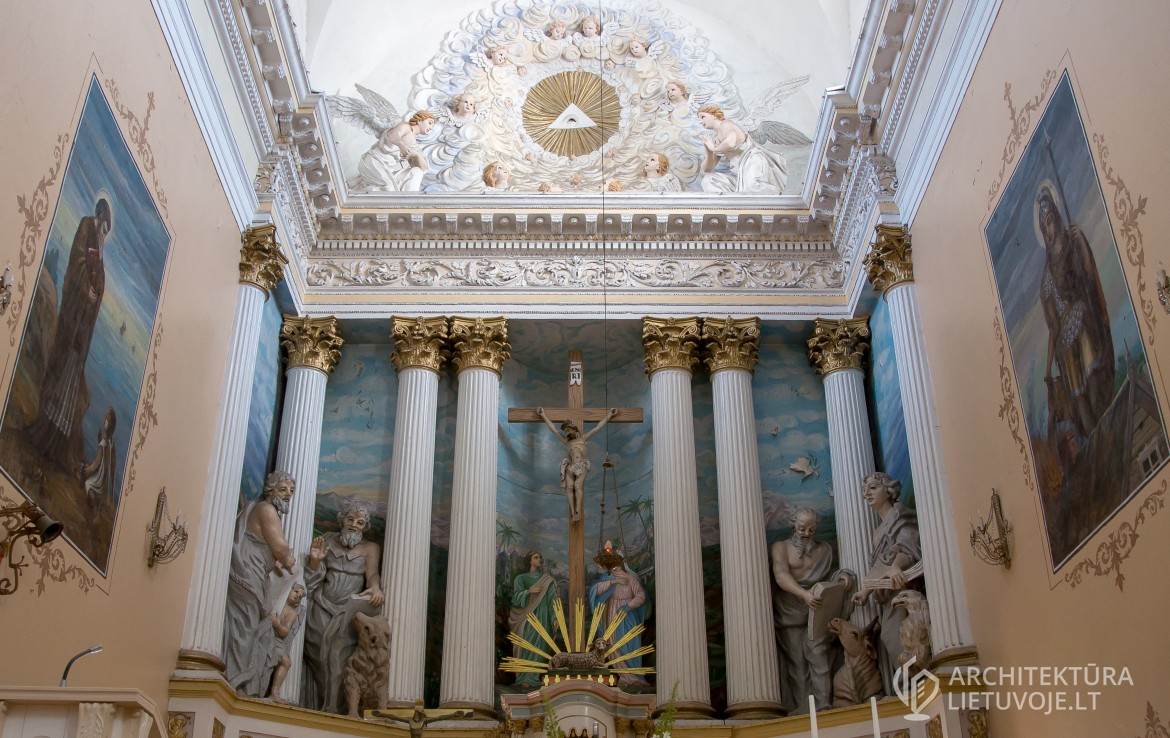 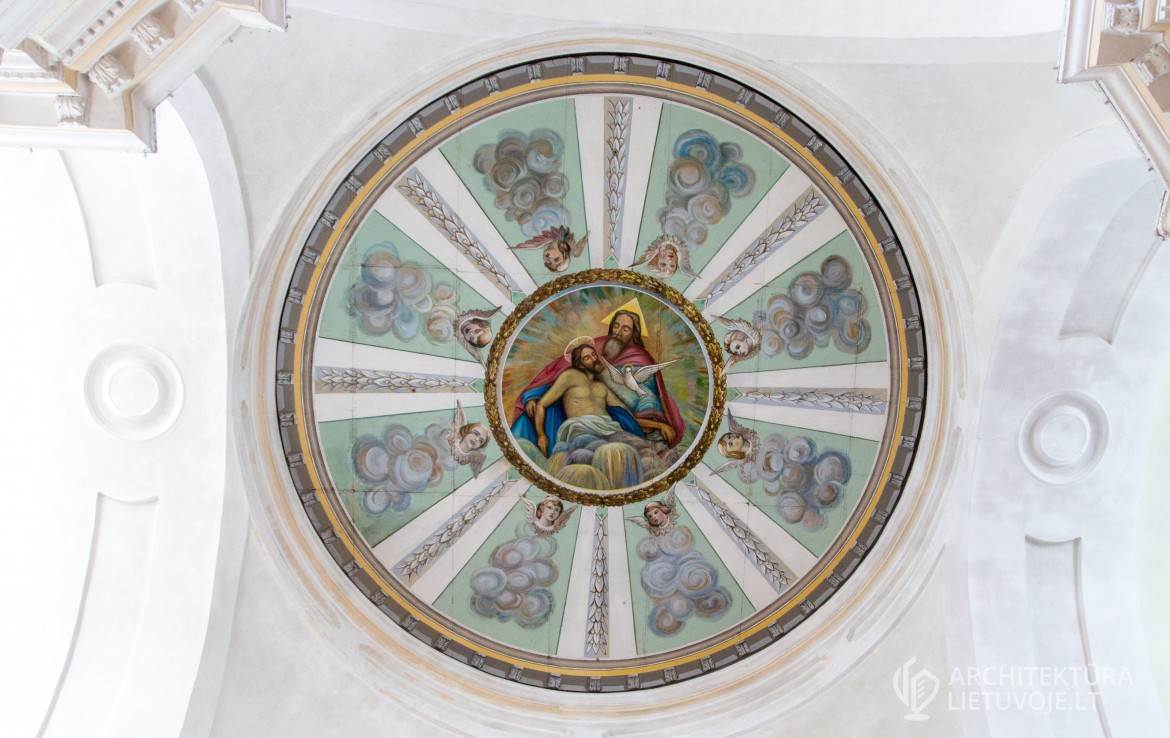 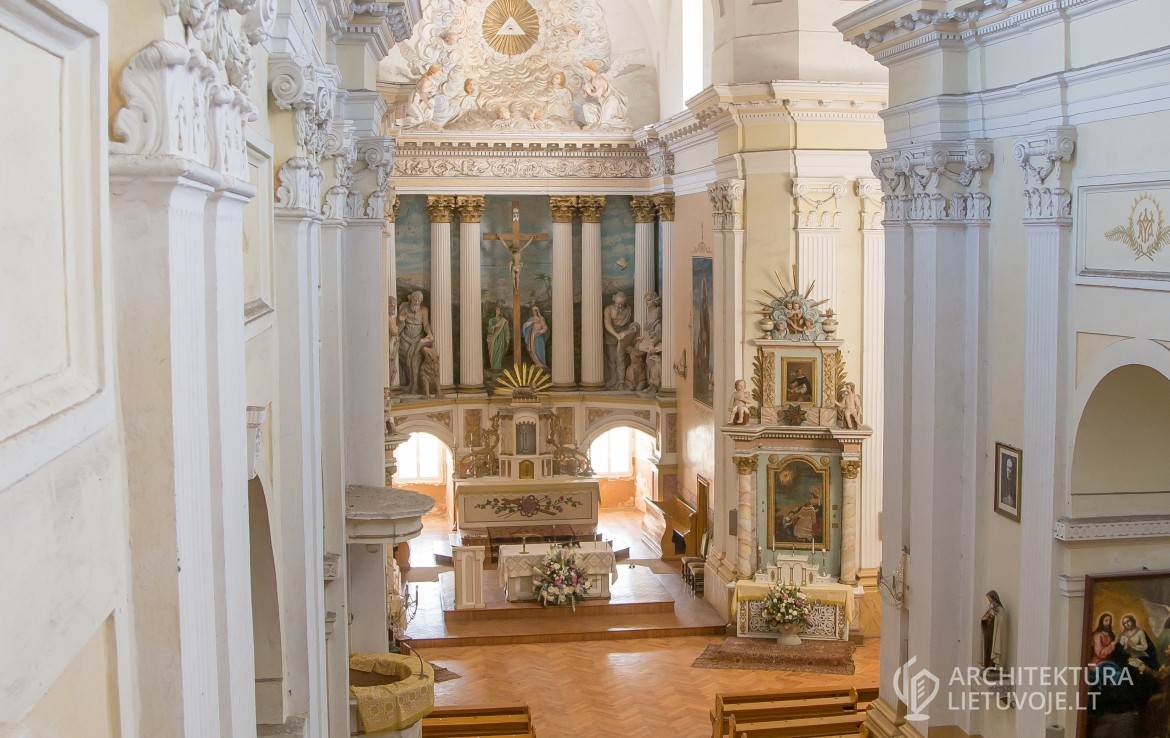 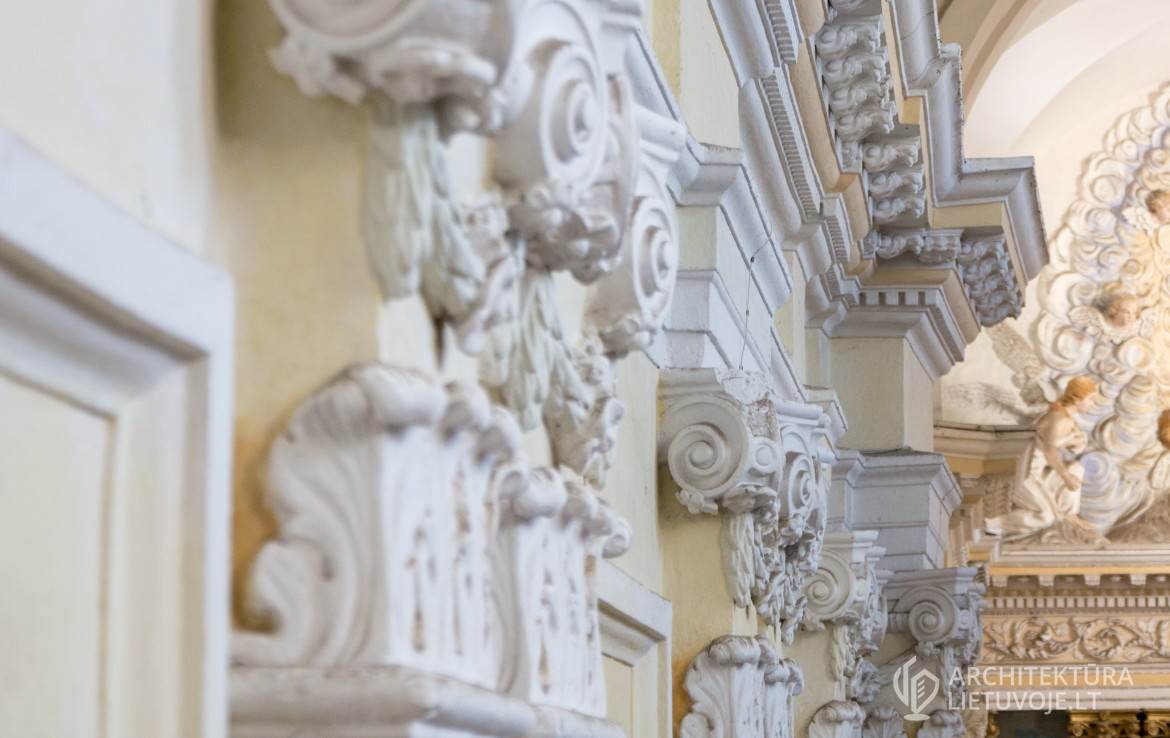 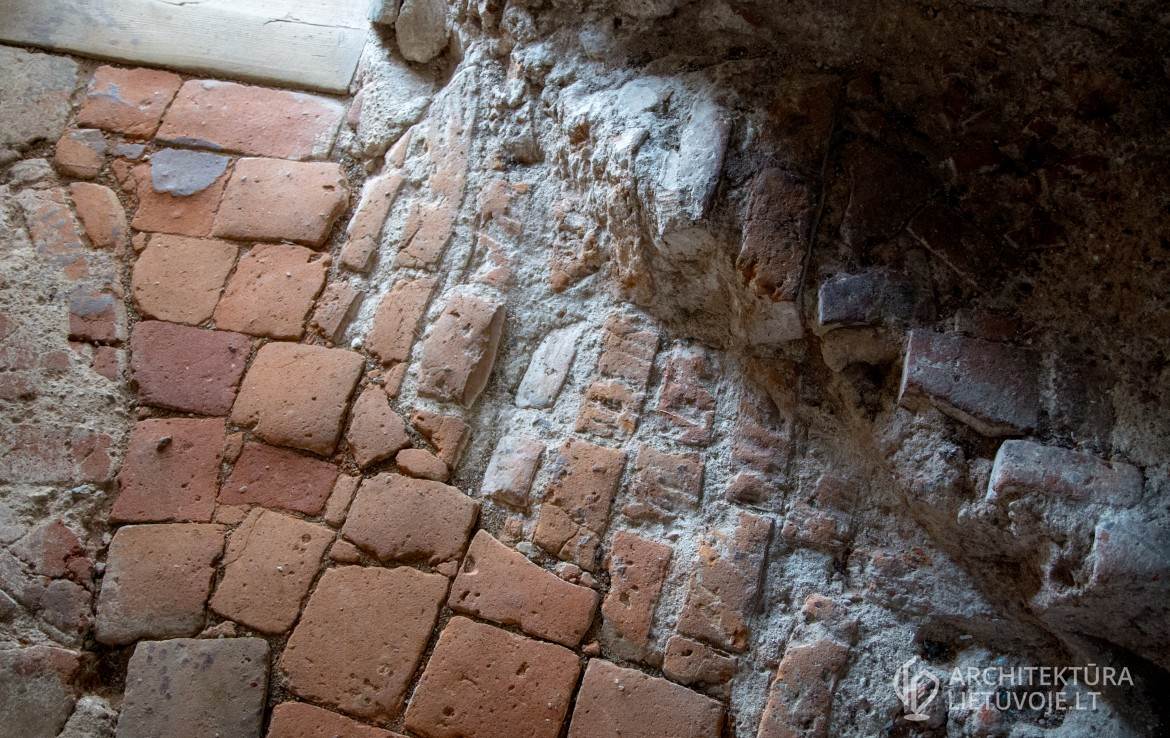 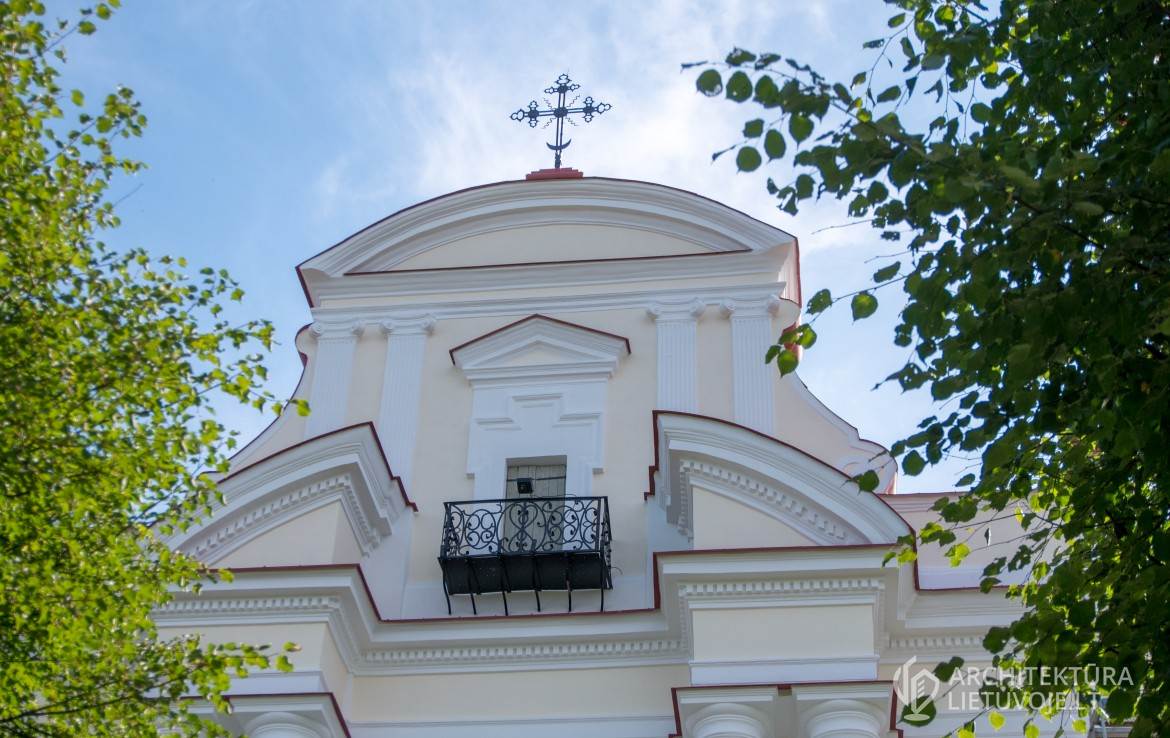 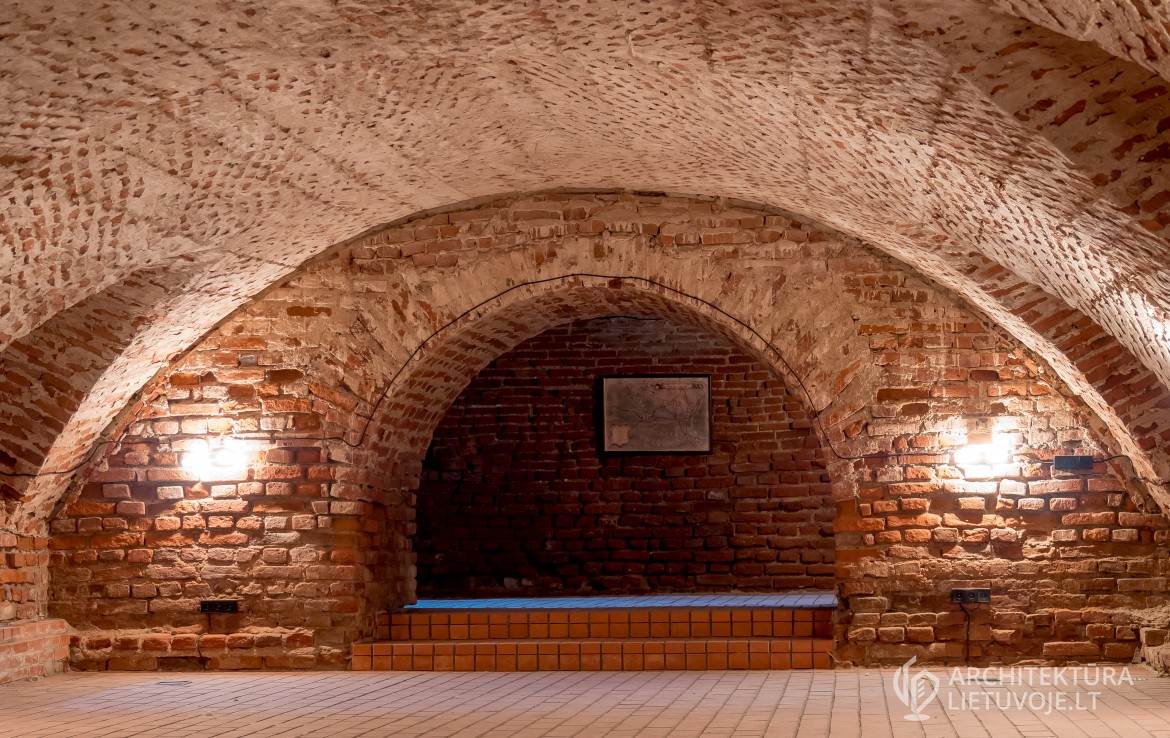